Sad news out of the Northwest where a University of Washington professor declared the northern Pacific Ocean blob dead as of the 24th of December.

To summarize the article, stormy, windy weather generated action on the surface of the ocean to mix colder water from greater depths and essentially wiped out whatever sea-surface anomalies that were present in the previous two months.

If you think the blob was the cause of the warmer than normal start to the water year, then maybe its death will bring an increase in loads in the coming months.  Either way, RIP blob.

The entire West Coast should see above normal temps for all days between 6 and 14, but it will be especially warm in Southern California in the latter part of the forecast.  The Four Corners region will move from below normal to nearly average during the same span of time.

The mountains are forecasting bare for the foreseeable future, especially the Cascades where there is a 60%+ chance of below-normal precip. 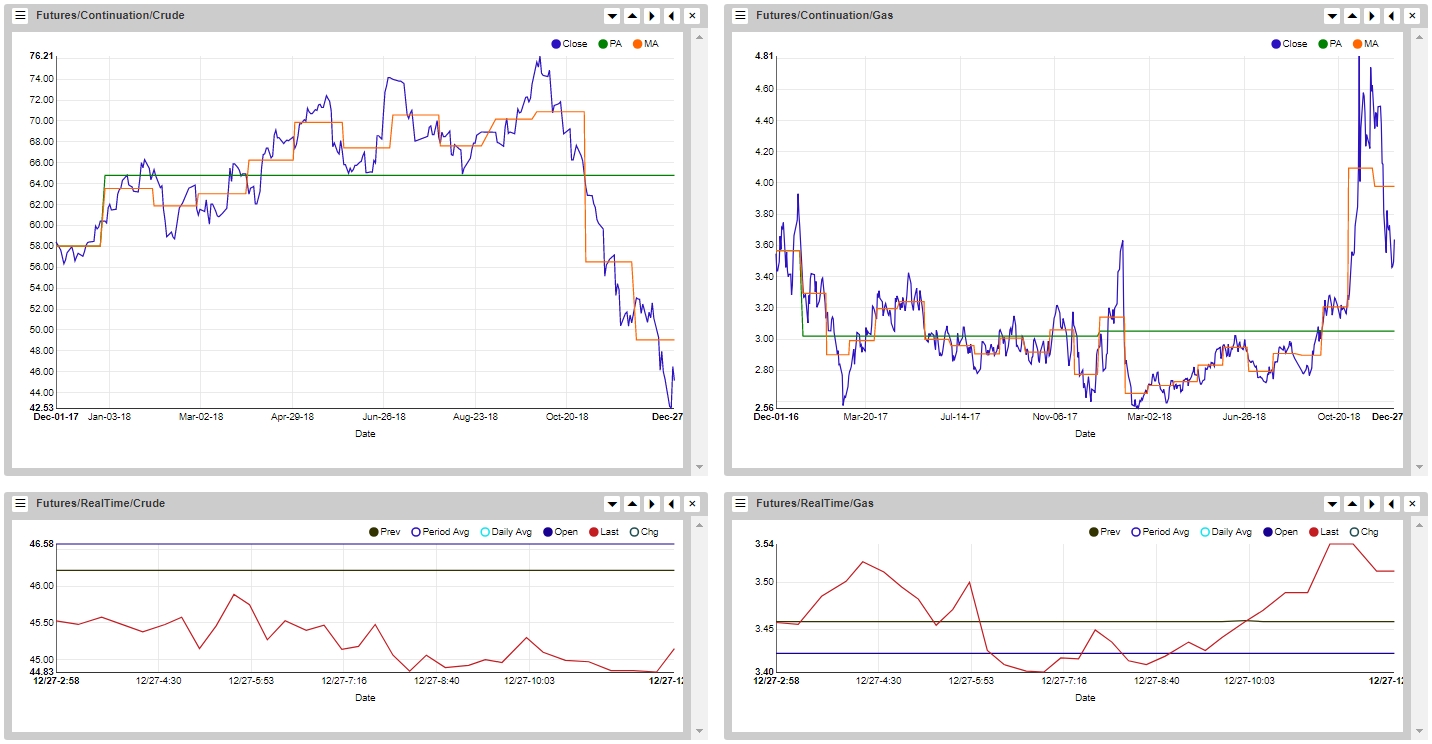 After rallying $4 on the 26th, crude fell back to $45.15 yesterday.  December is on pace to show a monthly average $7.50 lower than November, and a $21 difference when comparing the two month’s peaks. 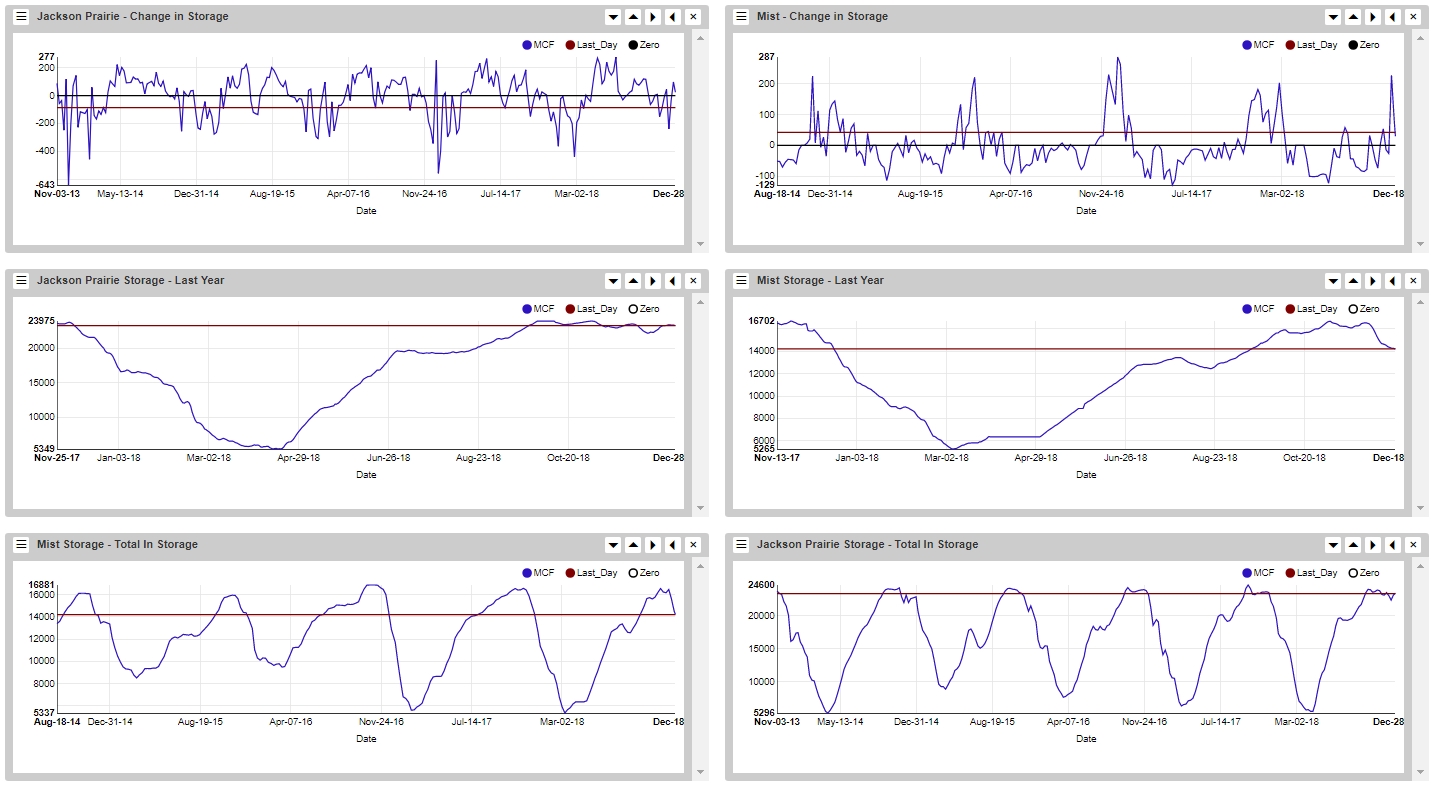 Jackson Prairie storage fell to -86 MMCF yesterday, down from -33 MMCF the day before, and a far cry from the 139 MMCF injection we saw on the 23rd.  Despite the consecutive days of withdrawals, Jackson Prairie managed a positive week on average. 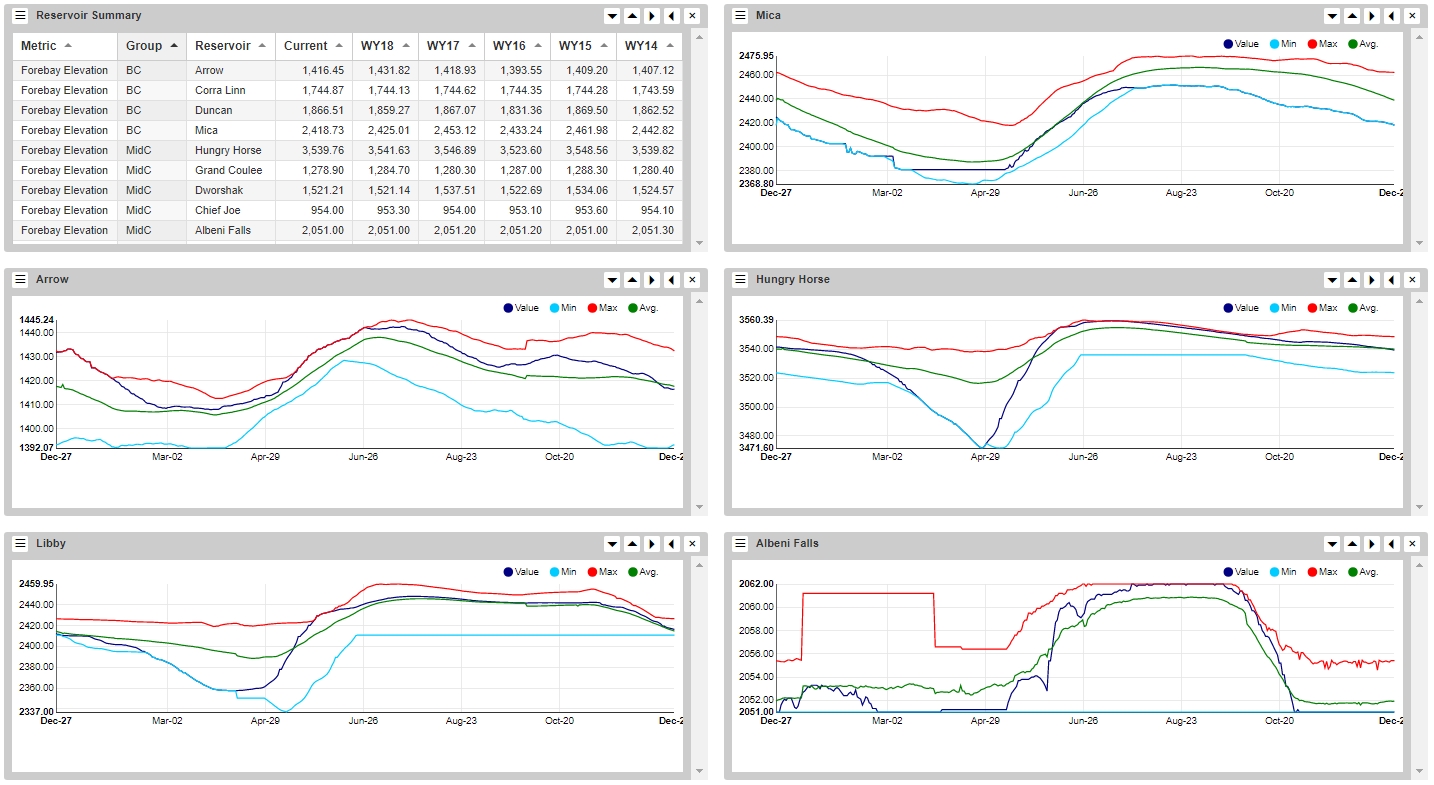 Arrow is sitting 15′ below last year on the same date, that’s a 3′ increase over last week’s mark.  Hungry Horse is moving in the direction after falling another foot below last year’s level to bring the total difference to 2′.

Chief Joe and Duncan show up as the only two reservoirs with more than a foot higher in elevation compared to last year.

The past week brought snow cover to much of the west including a vast amount of low-level areas.  The Cascades saw the largest improvement in snowpack as most stations are now measuring in the 75%-90% range compared to 50%-75% last week.  We could see the low-level snow disappear over the weekend as a warm front passes through, albeit quickly. 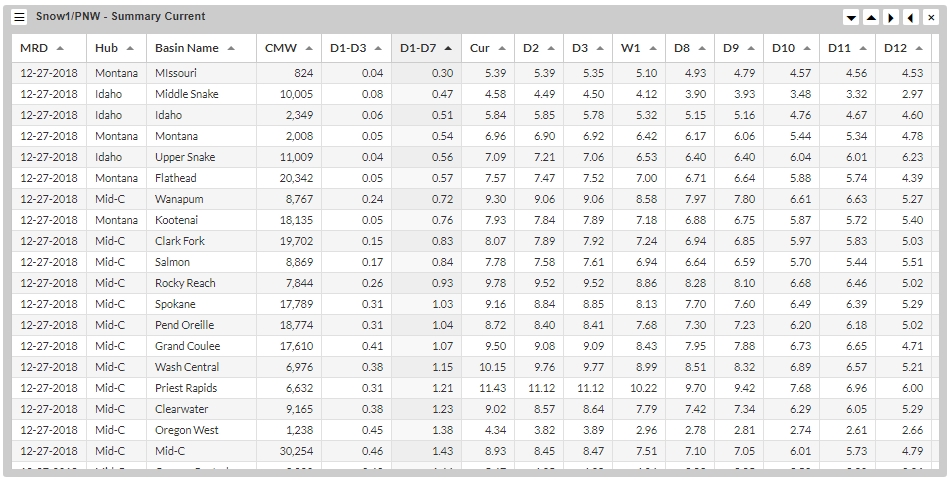 Most stations added more than an inch of snowpack over the last week, but Bonneville led the way with 2.34″, including just under an inch in the past three days.

Mid-C as an aggregate added 1.4″ over the past week.

Spokane was once nearly 50% from average during the first week of December, but a series of snowstorms over the past two weeks has let the basin climb its way back to normal.  The basin is also ahead of where it was on the same day last year, despite the slow start.  This, of course, could be wiped out quickly if the dry forecast looming on the Northwest hold true. 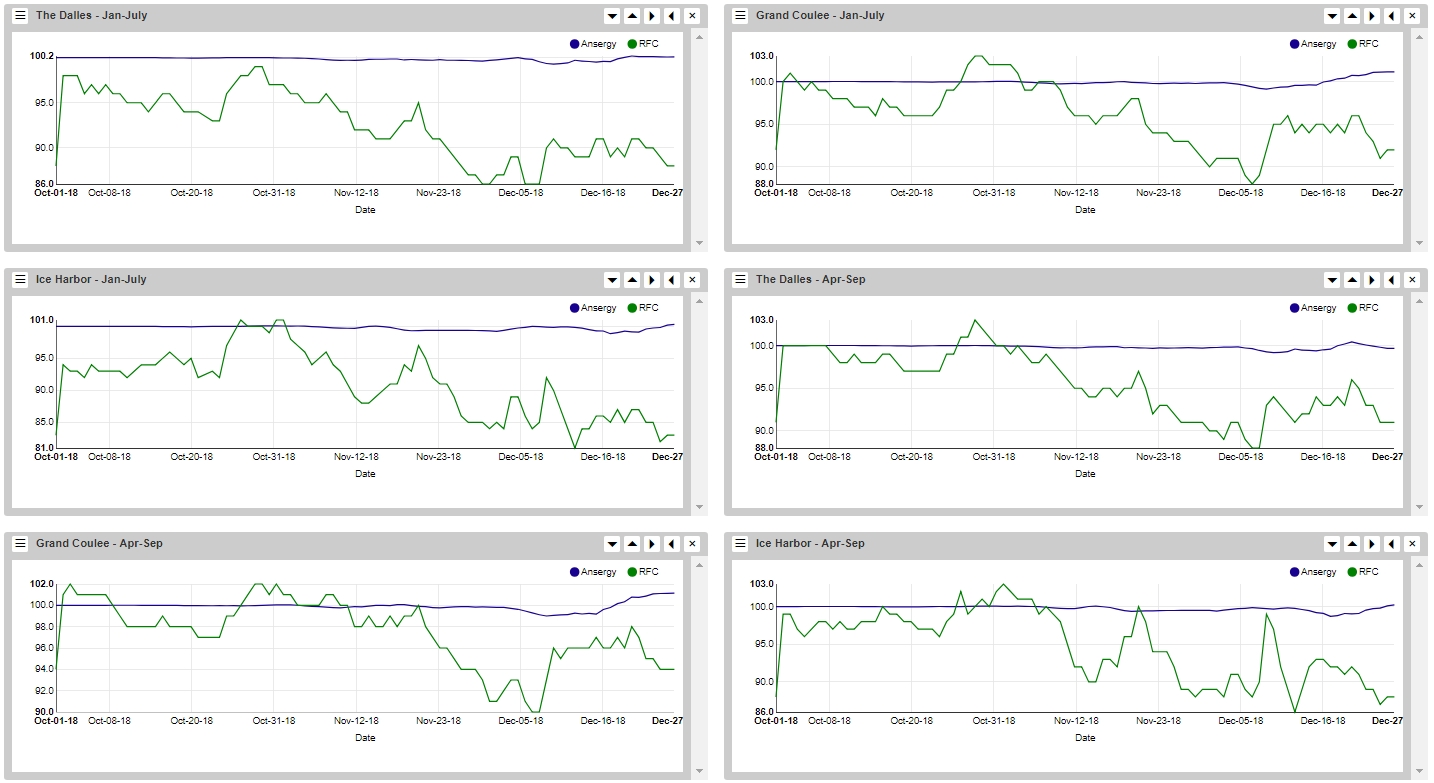 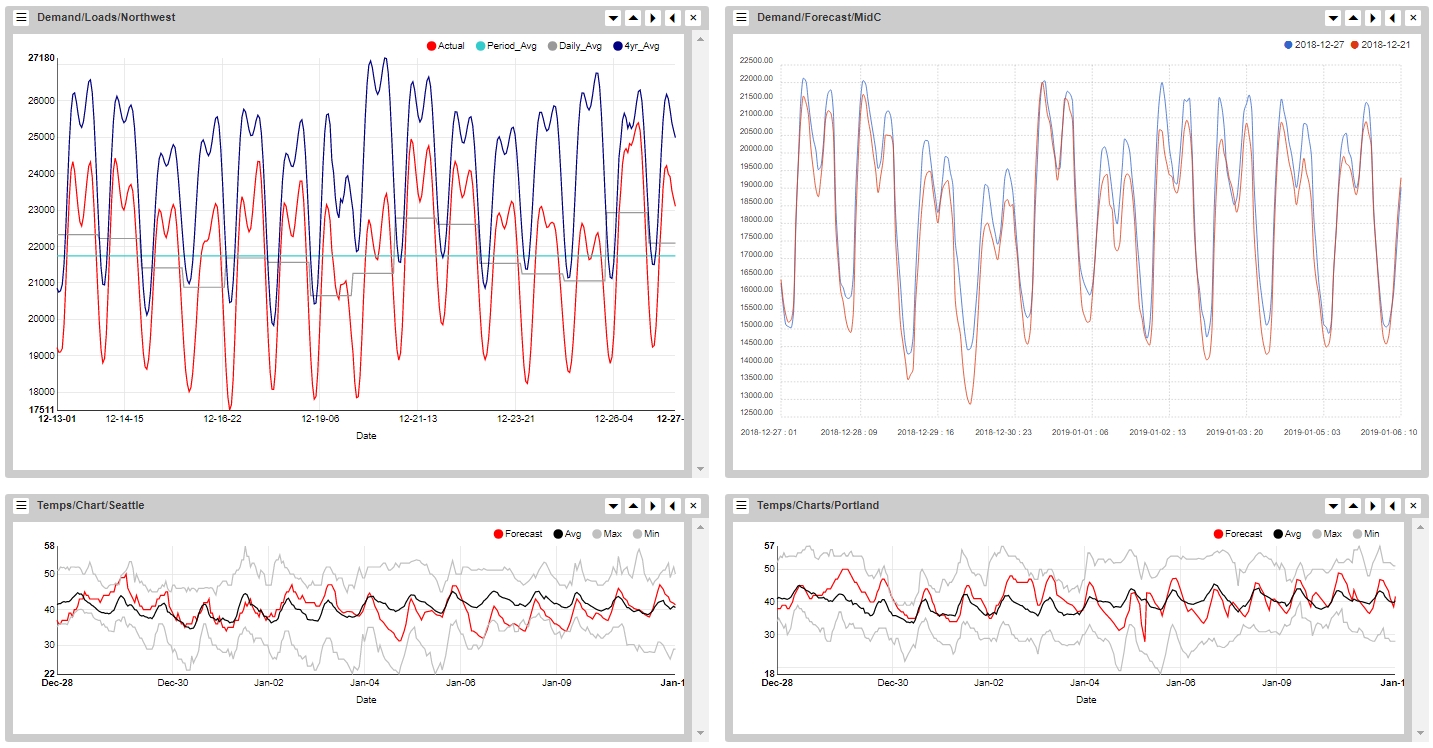 Seattle will be almost balmy this weekend as temps are set to top out at 50, six degrees above normal and just a degree from setting a new 10-year high.  Most hours project above normal through next week until reaching the 5th where we could see overnight temps fall below freezing at 31 degrees, eight from normal.

As the weather cooled off yesterday, loads moved in the opposite direction.  Demand was up 500 MW day-on-day at their peak, though that still equated to a 600 MW drop week-on-week. 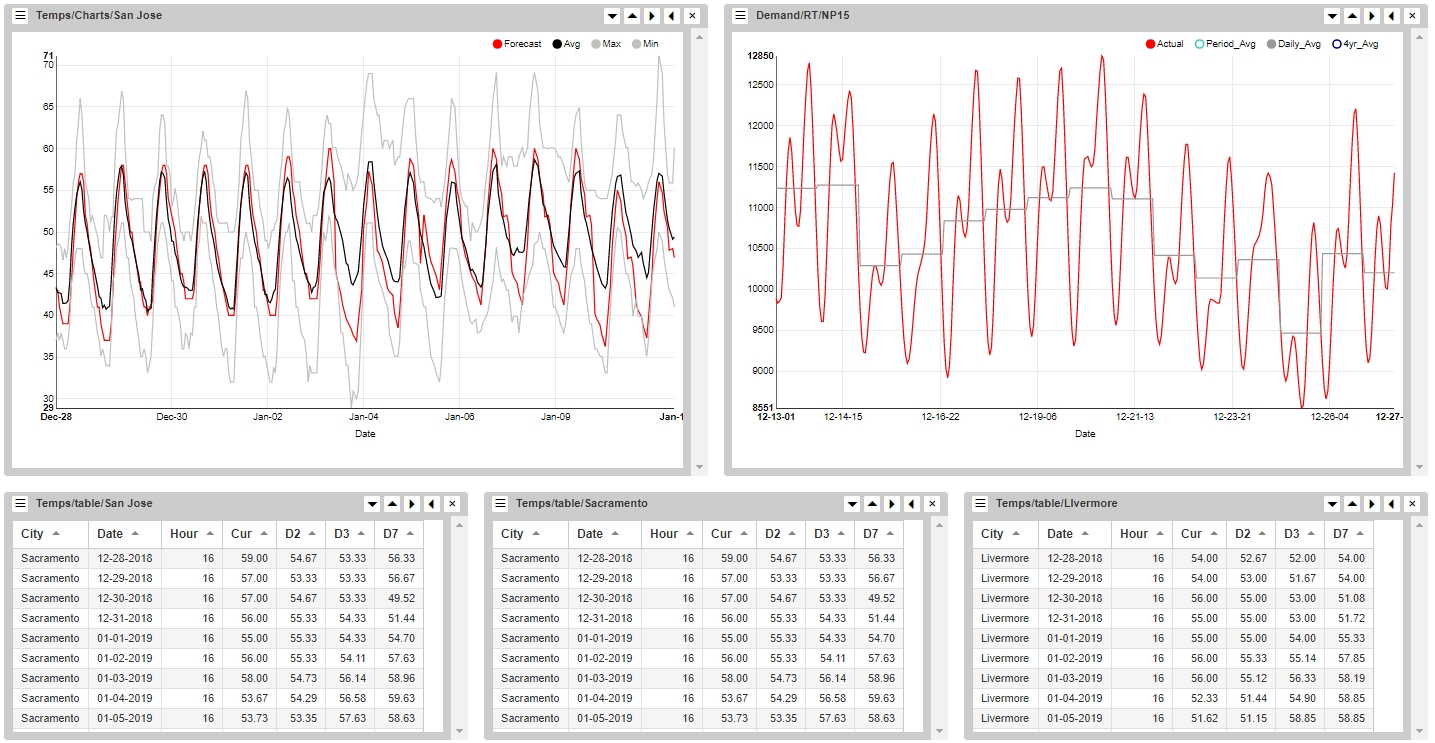 NP peak demand was up 120 MW at its peak yesterday compared to Wednesday.  Much like Mid-C, this was 600 WM short of the levels we saw a week ago.

San Jose stays close to the normal line, at least for daily highs, through the rest of the year, but starts to deviate thereafter.  The 3rd could see the area top out at 60 while lows remain comfortably above the 40-degree mark. 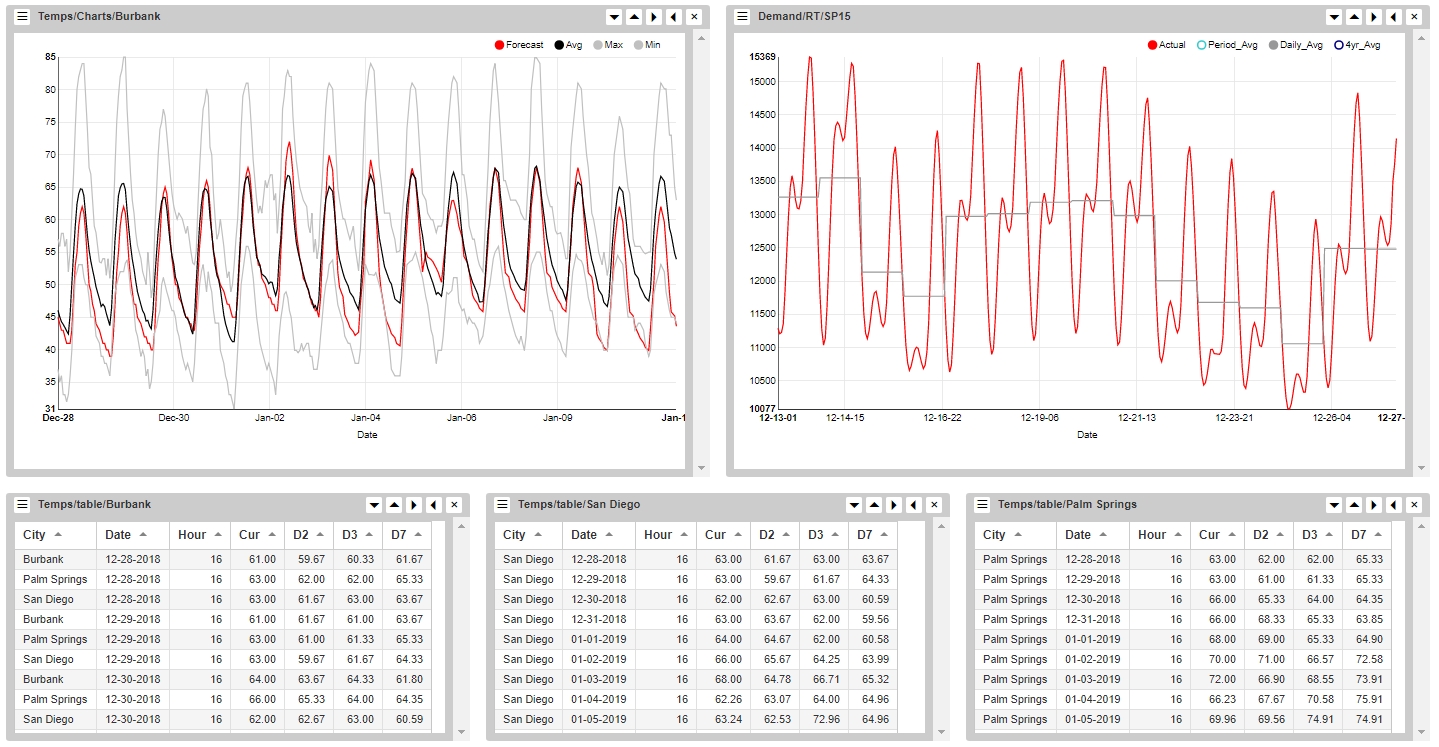 SP peak demand increased more than NP or Mid-C as there was more than 400 MW growth at its peak, day-on-day.  Week-on-week demand was down 400 MW as well, however.

No 80-degree highs are in this week’s Burbank forecast, but consecutive 70-degree days are in store on the 2nd and 3rd.  Tomorrow’s low of 39 looks like the coolest over the next two weeks.

Once again, the Southwest is getting the brunt of winter weather in the west, at least in terms of deviation from normal.  Daily lows will fall into the mid to low 30’s for the next week, each coming in at roughly 10 degrees from average.  Highs will fail to top the 60-degree mark in the meantime as well.  The second-half of the forecast looks much warmer as the 7th may see a return of 70-degree highs. 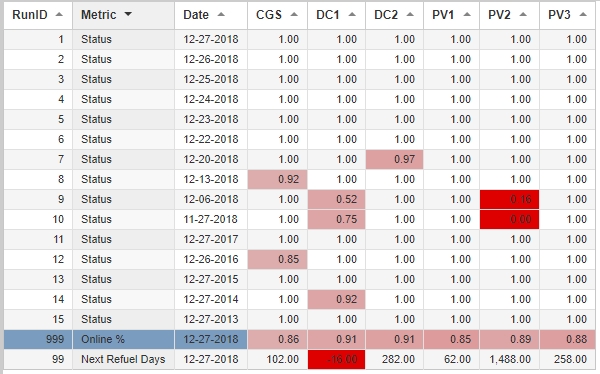 SP-15 solar jumped to 5,100 MW on Wednesday, the first 5,000+ MW generation day in nearly two weeks.  Wind was able to tack on more than 2,000 MW in most hours as well, creating a lucrative renewable day for SP.

Mid-C wind has been subdued following the 20th’s 2,600 MW peak generation.  Yesterday topped out at just over 500 MW, while Christmas day failed to see even 30 MW hours.

ISO Gas outages were comparatively flat yesterday after recording a 130 MW drop.  Contrast that to the 1,000+ MW swings we saw last week.

NOB remains unchanged in the most recent projections.