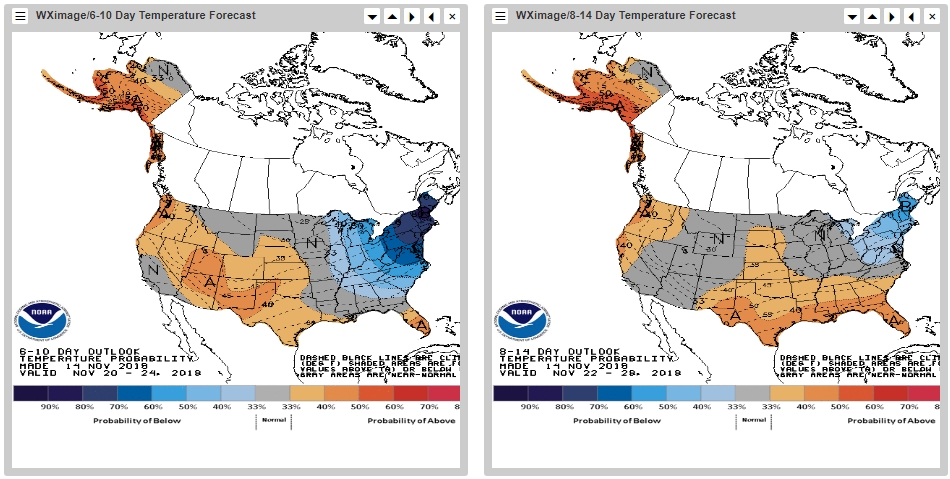 The cold front that blanketed half of the country missed out on most of the west last week, and now leads into a slight warm spell for everywhere in the WECC not named Southern California and Montana.  Next week ushers in a return to normal for everywhere but Mid-C and NP. 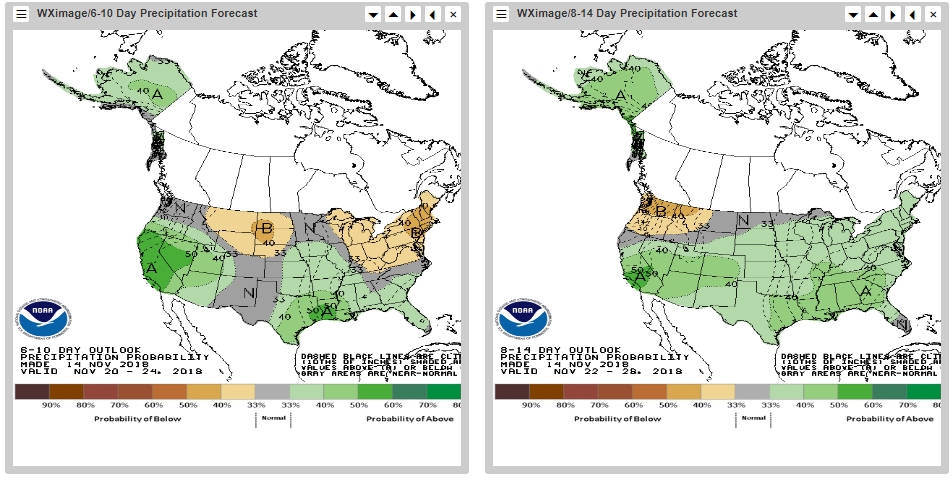 SP is facing some decent precip over the next two weeks to go along with it’s cool-to-normal weather.  The Cascades are looking dry moving into next week, at least compared to normal. 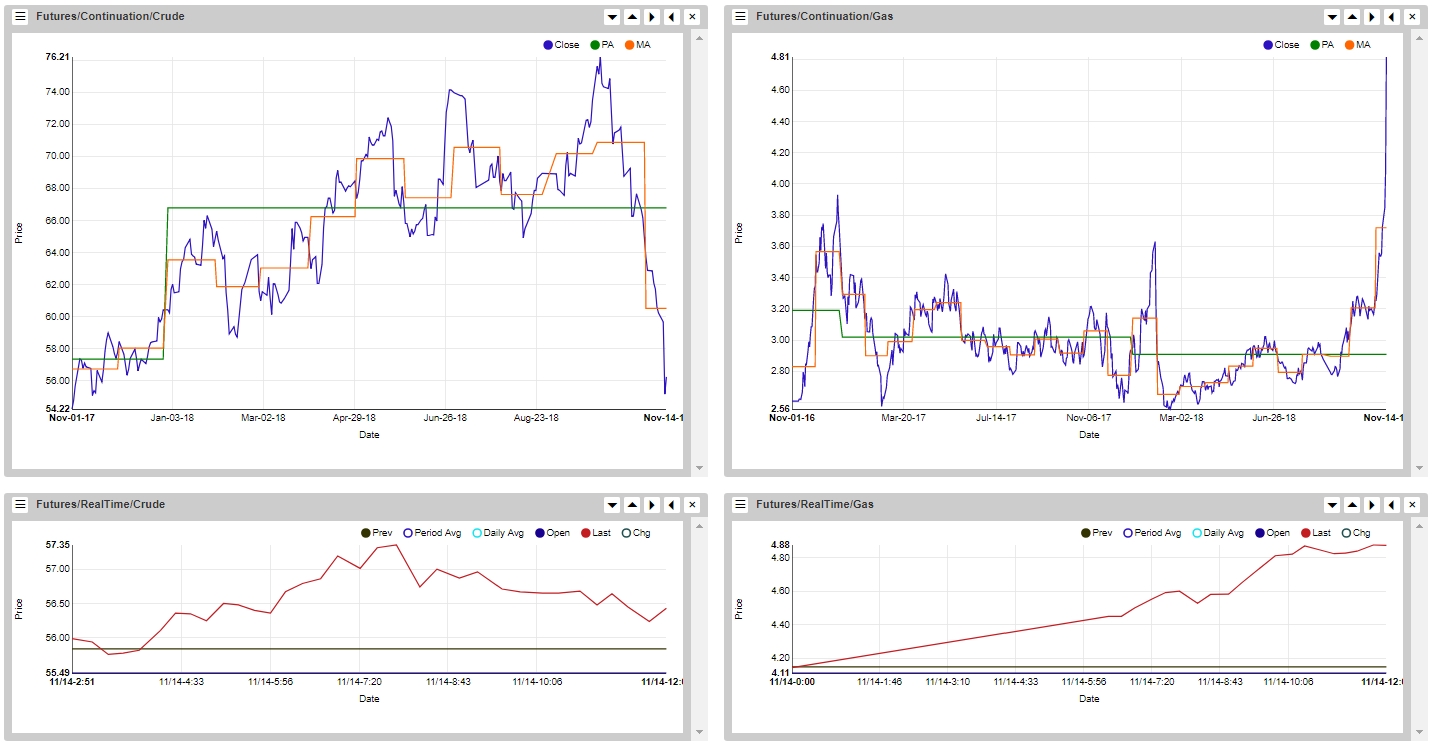 Crude managed to stay positive yesterday (up $0.50), and finally ending its race to a new one-year low at $55.15.  Gas had a very volatile day with a day-on-day increase of $0.72 and a continuation of the increase that began on Halloween.

December Sumas jumped another $1.50 yesterday bringing it just a penny shy of its high of $11.14 that we saw in October, and now $4.00 higher than it was just 12 days ago.  January is following a similar erratic path as prices jumped $1.20 day-on-day.

SocalCitygate continues to make a slower climb in both December and January as prices have also matched their October highs. 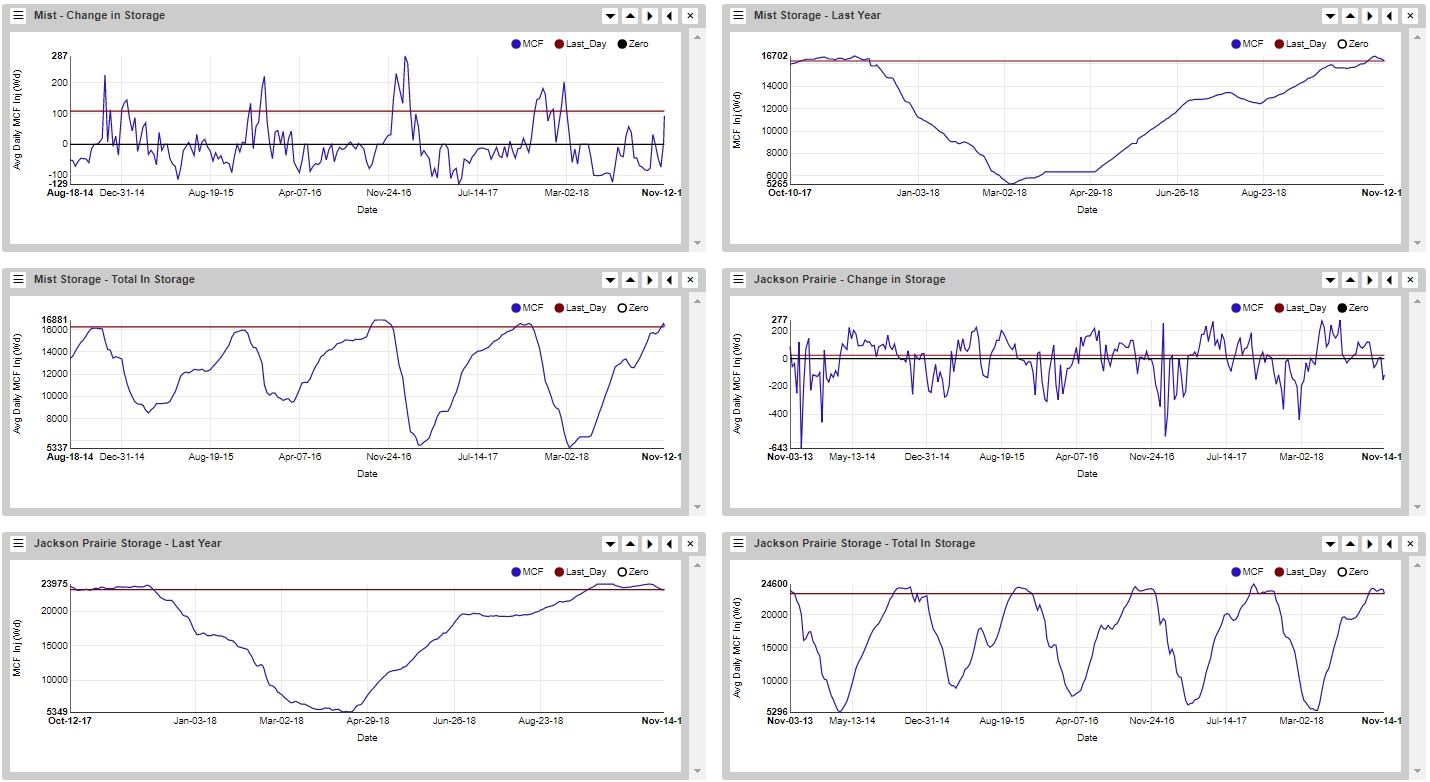 Jackson Prairie notched a withdrawal of 118 MCF yesterday, also marking the 9th-straight day of withdrawals in the process.  Socal has been using heavy withdrawals of its own since the 3rd of Nov after falling to -222 MCF of storage yesterday. 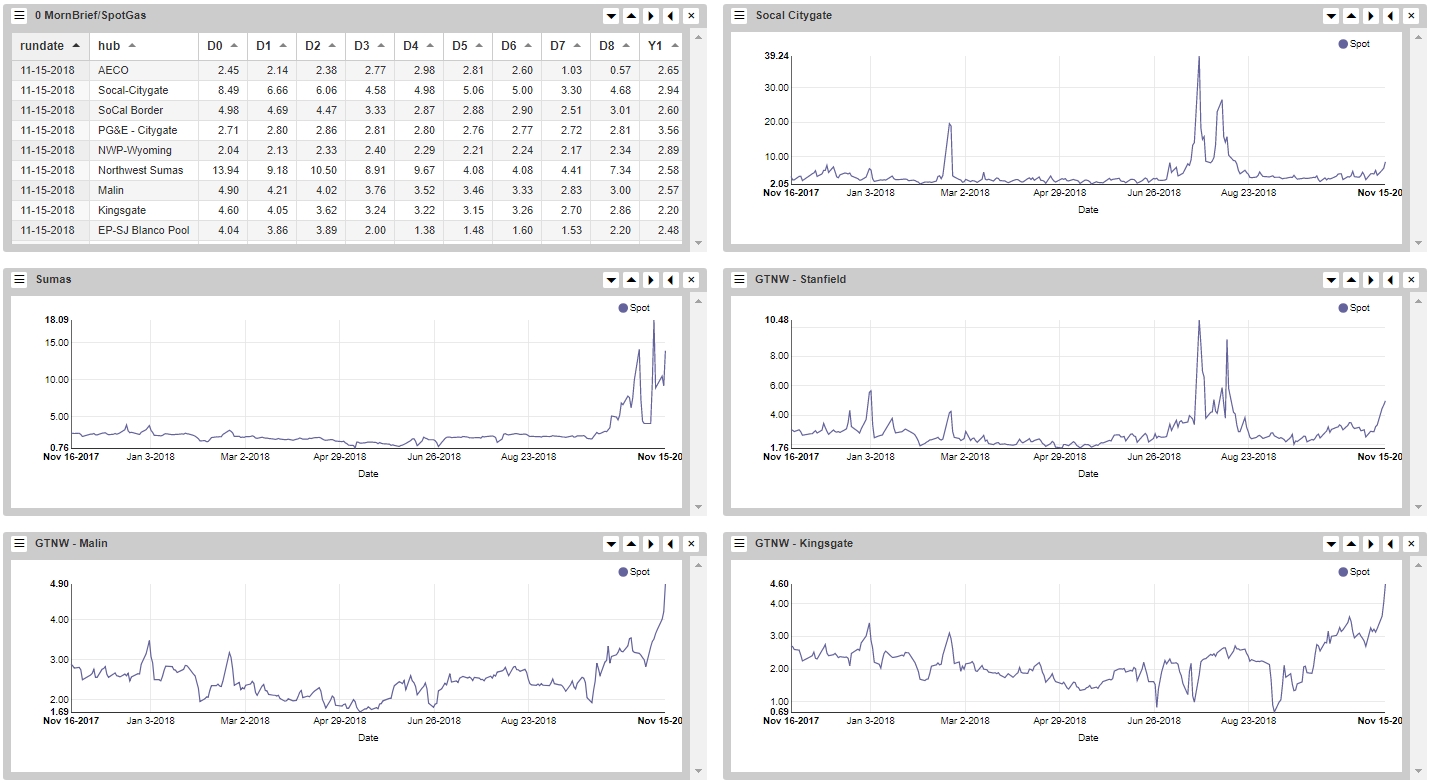 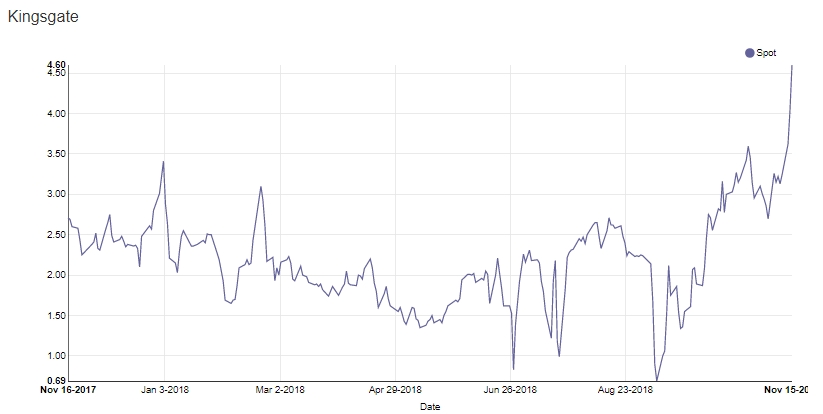 Prices aren’t nearly as high as the hubs mentioned above, but Kingsgate has marked its highest price of the past year following a 40% increase since the 10th. 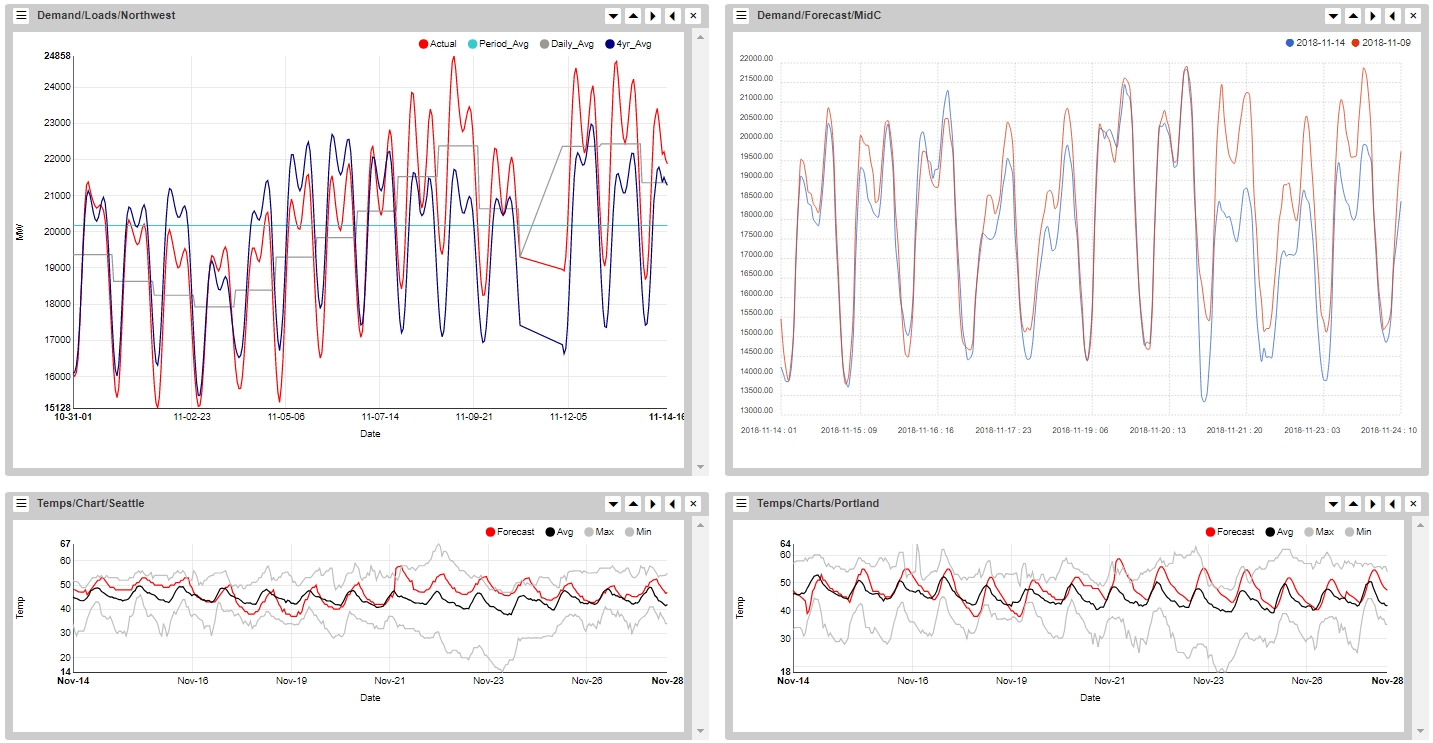 Seattle is projecting temps above normal for all hours until early morning on the 17th.  Daily highs should reach into the mid-50’s, though lows could dip into the 30’s by the weekend.  Next week could be even warmer as the 21st calls for a high of 58. 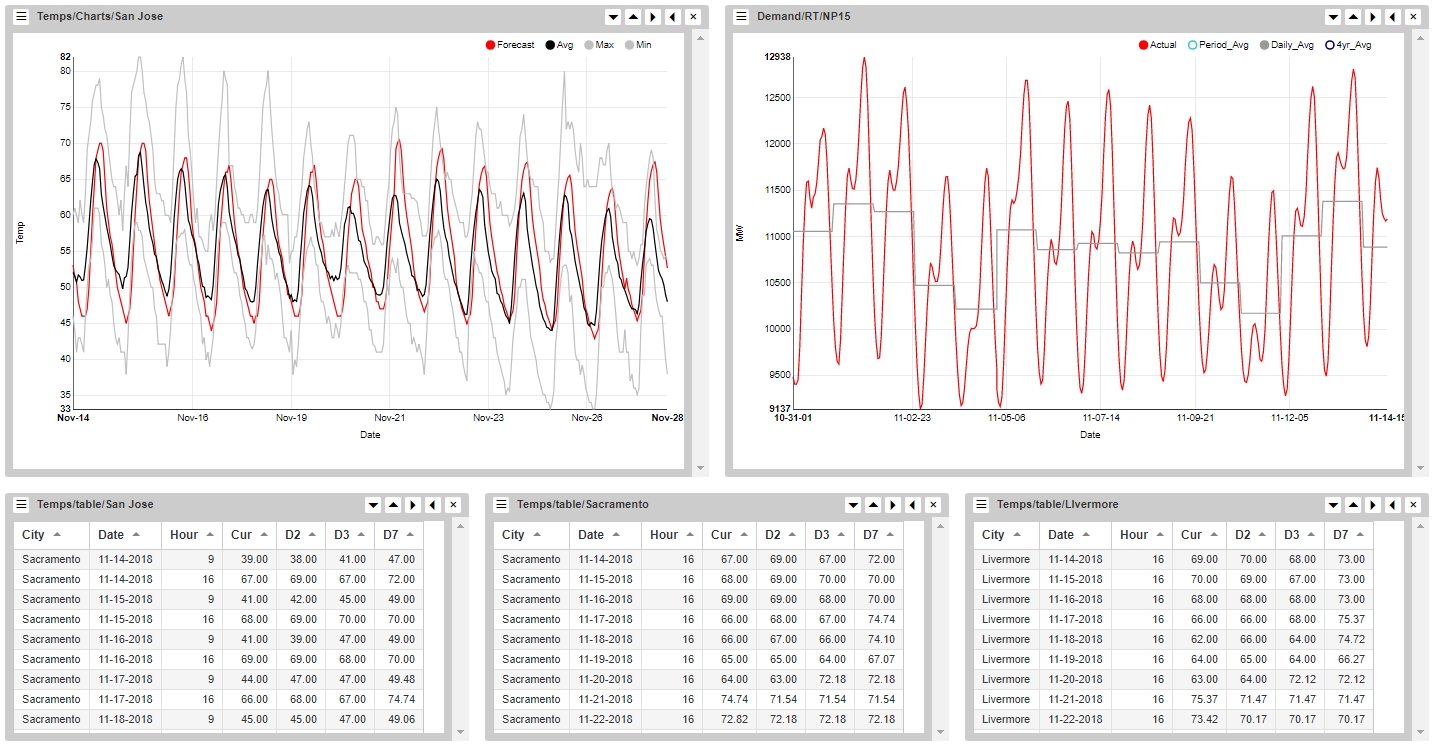 NP peak demand was down just 100 MW yesterday compared to Tuesday and was up more than 200 MW compared to Monday.  Off-peak loads managed a 320 MW increase day-on-day.

San Jose is set to top out at 70 degrees today, but temps will slowly creep toward normal as we draw closer to next week where highs should rest in the low to mid-60’s.  Look for a low of 44 by the 18th. 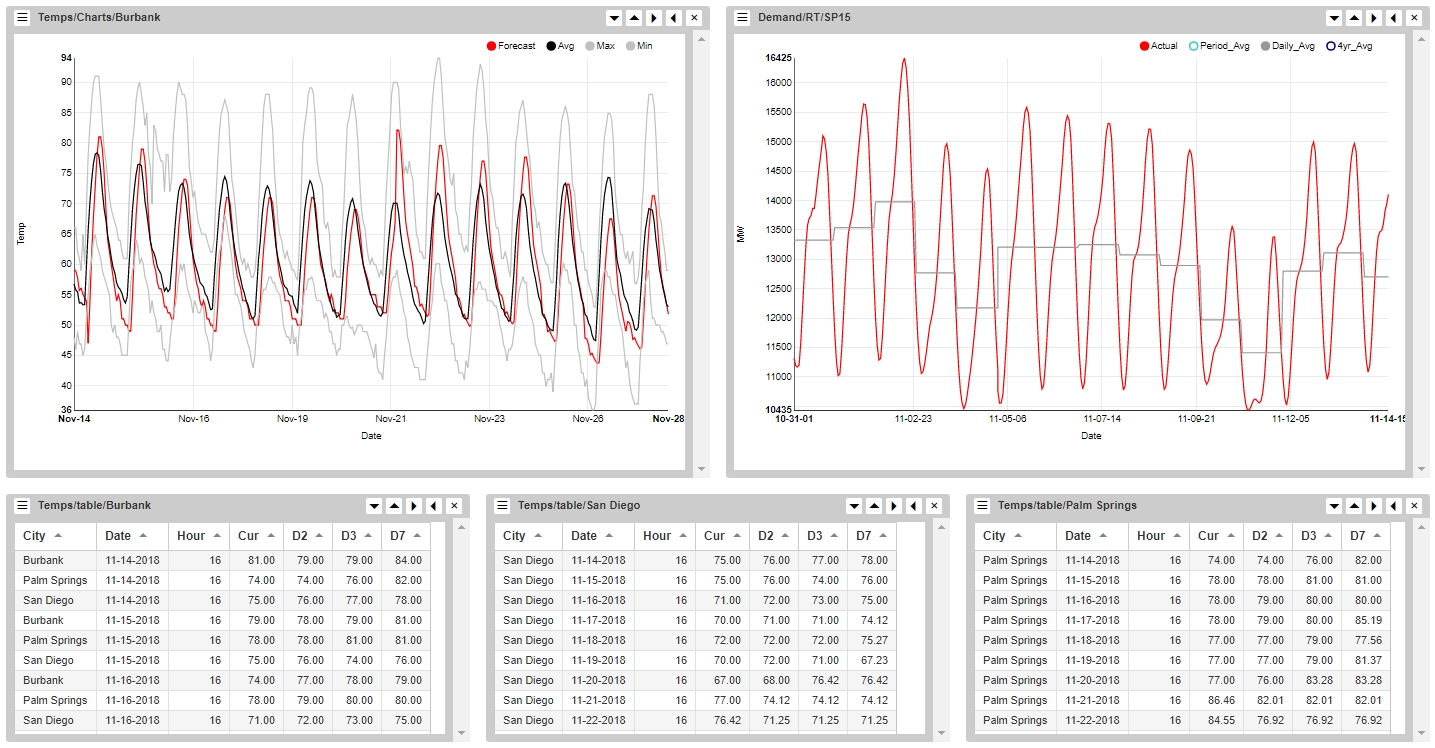 Burbank should top out at 79 today before falling just below normal to finish out the week (and weekend).  The 20th calls for a high of just 69 before we see a potential reacquaintance with 80’s by the 21st.

Phoenix is projecting most hours below normal over the next seven days, including highs at just 73.  The following week should bring warmer temps, just as we are seeing in Burbank.

SP-15 solar remains mired in low 5,000 MW generation having eclipsed the 5,500 MW mark just twice in the past week.  SP wind isn’t doing much to make up for the lack of solar as it has failed to peak above 1,000 MW in each of the past two days.

Mid-C wind saw its floor fall out from under itself as well as generation peaked at 291 MW on the 11th and hasn’t topped 30 MW in an hour since 3 AM on the 12th.  Compare that to the 2,500+ MW hours we saw through much of last week.

Three of the four reported BC reservoirs are well below their marks from last year with Duncan as the lone exception (and four feet above the same date last year).  Stateside, Hungry Horse is showing a 6′ increase year-on-year.

Here is a before-and-after week-on-week comparison of snow coverage.  Cold weather made its mark on the eastern-side of the continental divide, but much less so on the West side of the mountains.  The North-Idaho Rockies report above normal snow depth while the rest of the state patiently waits for its first major snowfall. 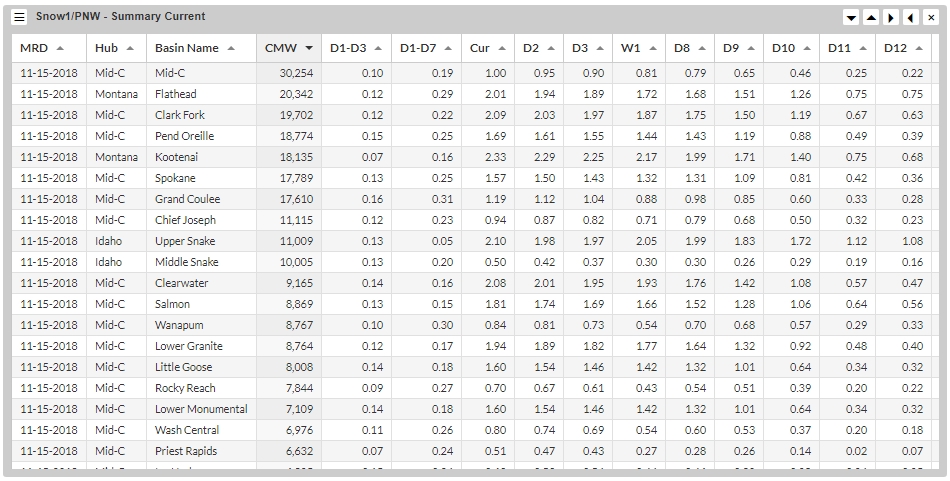 While all basins showed at least a week-on-week increase (with the smallest coming in at a slight 0.03″), the largest weekly gain was still less than half an inch as the Missouri recorded 0.36″ and Grand Coulee marked 0.31″.

The red line shows the current water year’s place among selected years.  It’s obviously too early to determine much of anything, but the Flathead basin is above all but last year in this comparison.