It’s crazy out there; short and your shot dead. Flat, not bad, long good.

Sumas spot gas cleared $69/mmbtu yesterday setting a new bar for absurdity. Looking at the charts, it’s hard to say precisely why this happened, aside from some cuts on Westcoast.

Those cuts at Station 4 rippled through all the way to the Chehalis compressor station. But that doesn’t seem to explain a $50 move in daily gas, does it?

Ansergy’s gas demand proxy doesn’t explain it, either. This index summarizes all of the Northwest LDC gas nominations by day; it gapped up two weeks ago on the colder weather but has been mostly sideways for the last week. Who knows, it’s a skittish market, one that you don’t want to short without a good reason (like a hedge against your non-Sumas gas-based length.) 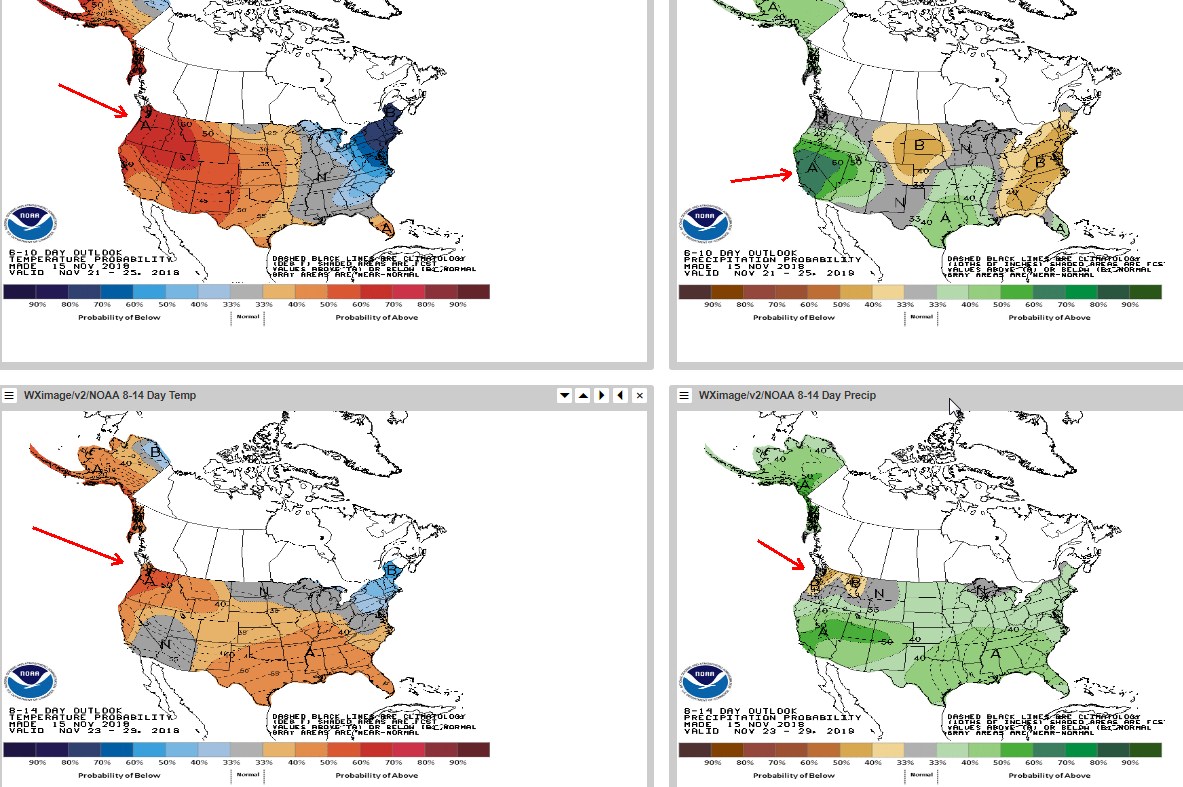 What’s most crazy about these spot gas gyrations is the weather is warm;  Seattle’s November degree day anomalies are 16% below average; not even close to being cold, yet.

Back to that NOAA weather, check out the precip heading towards California and the Snake River Basin. Good old Kally should get the fires put out, but this storm is big enough to trigger the mudslides off of those denuded hillsides. Out of the pot and into the kettle.

The Snake might get a blast of precip, but the upper Columbia basins are either normal or dry, not good as we get deeper into the water year. Not too deep. Still, a few good storms will put everything back on track to a normal water year; that’s what we’re betting on, a near normal water year. The bigger fear today is that the Northwest gets that New England cold; the picture goes from red to blue, that will be an issue given the gas situation. 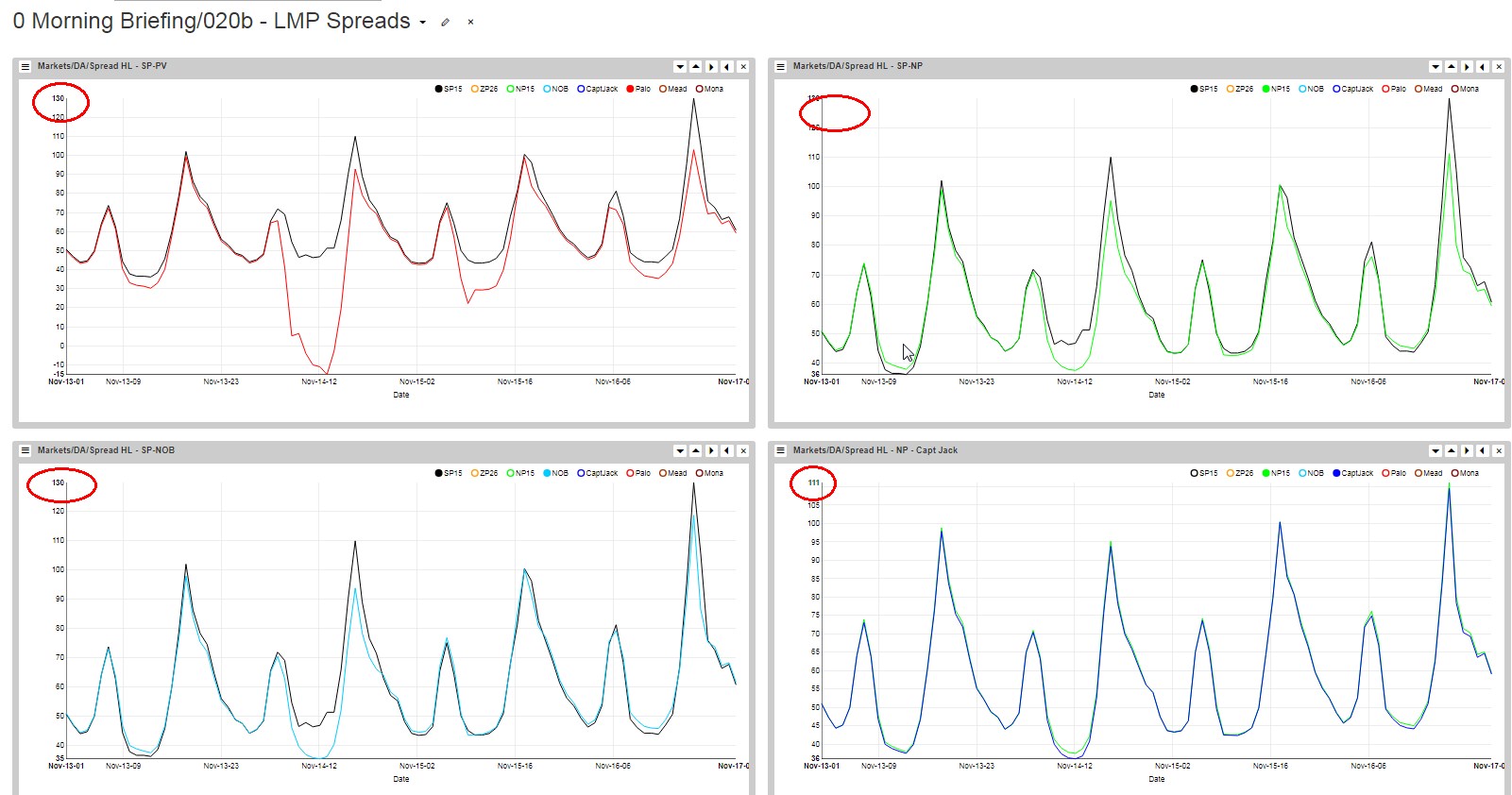 Socal Citygate spiked, too, but that hub has a different issue and, for once, it’s fixable.

Wheeler Ridge is amidst some maintenance and is costing Socal about 650 MMCF/day; but it is short-lived and the outage will end this weekend. But, always a but, another outage is planned for early Dec. Brace yourselves.

Socal has pulled two bcf from storage over the last week; PG&E’s demand is robust relative to past years. But the big number was the cut in imports, which is all Wheeler.

That 650 MMCF was just enough to spook the market and drive Citygate back to the high teens, but as we said earlier, it is a short-lived factor and should be restored by the weekend. 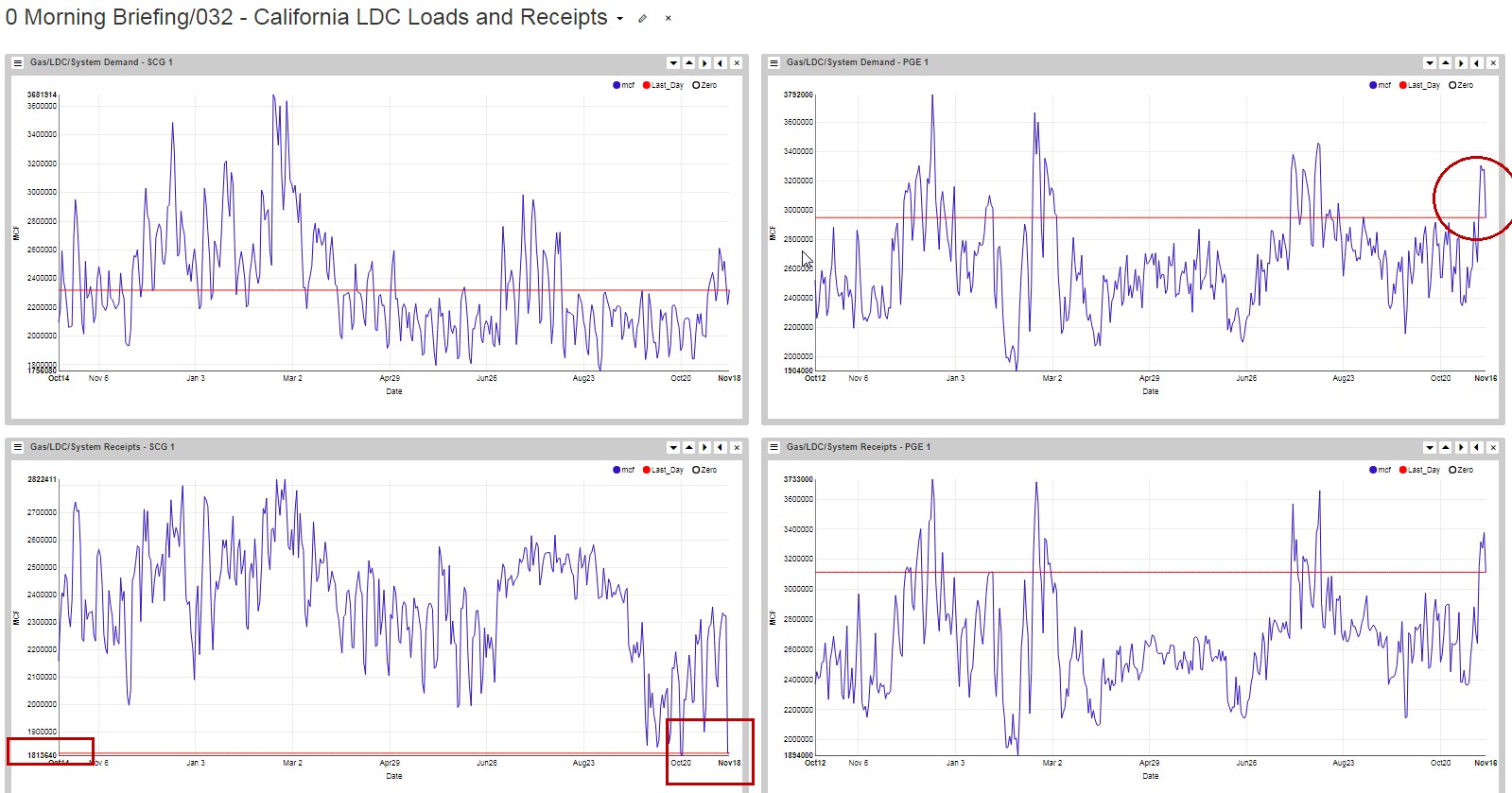 Until it is, Socal’s receipts are at a yearly low while PG&E’s demand has retreated from the highs earlier this week.

There is a set of bearish plots, and that’s a good thing given the dire straights the gas system finds itself in. Weather is fickle, this west coast warm spell has been sticking around for two months and it will break down, one of these days. When that happens, watch out. 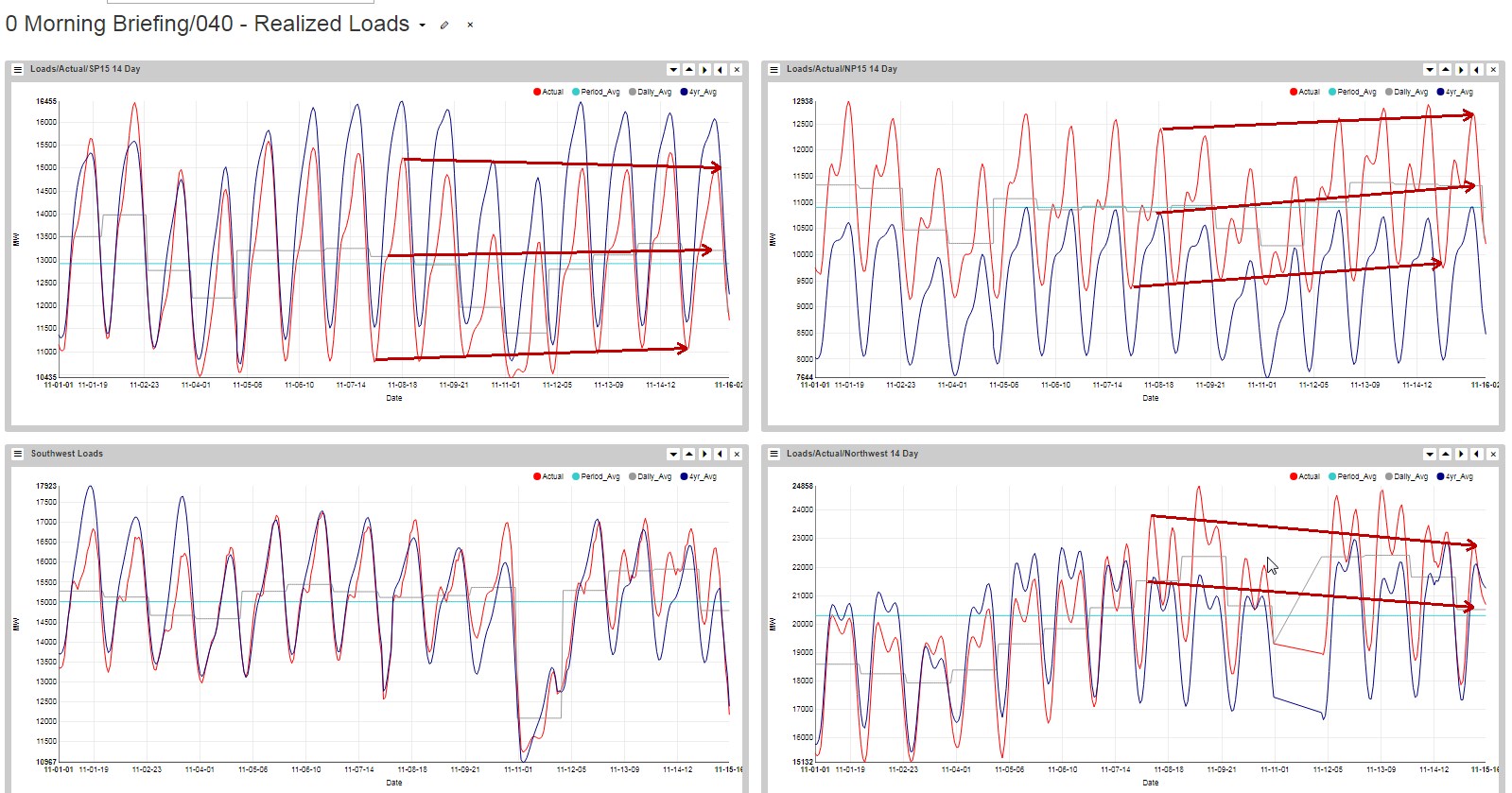 ISO loads are up, week-on-week, while the Northwest’s are off due to warmer weather. 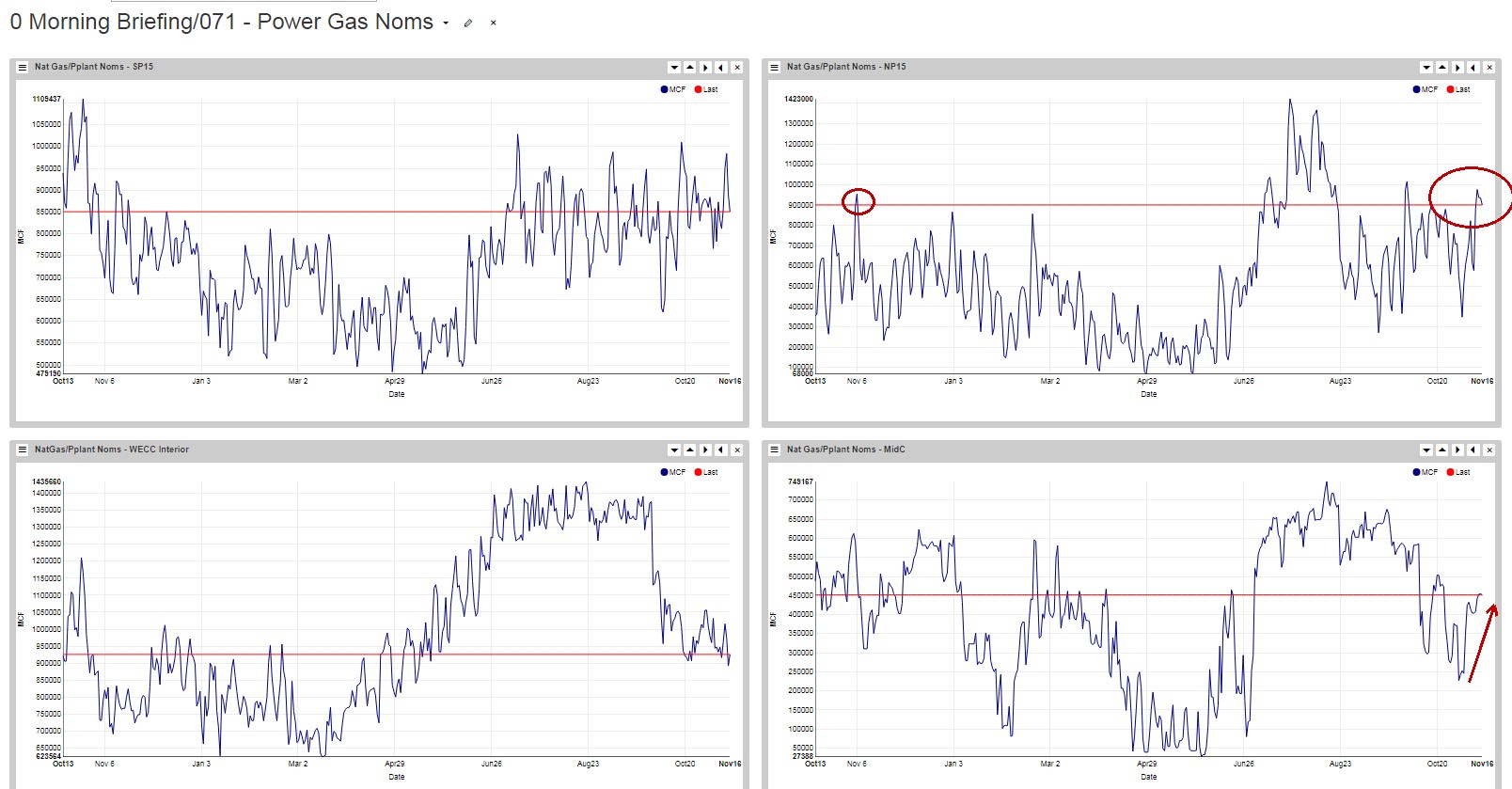 MidC’s gas nominations for power plants ticked up, a bit, while NP’s are higher than they were any time last winter; NP’s are nearly where they were when that hub was serving SP’s summer loads, which is basically what it’s doing now. With high Socal prices, the ISO is pulling supply out of ZP to serve SP – not that we’d know anything about that since the Idiot System Ops quit reporting flows on Paths 15 and 26. What were they thinking! One of our guys sat in on the call yesterday and couldn’t understand a word that was said. Apparantly, the ISO had a foreigner who barely knew a word of English explain the inexplicable. I guess it sounded like the guy was speaking in Tongues through a can. Well, that’s one way to avoid answering questions that don’t have an answer – put someone up there and have them speak gibberish. 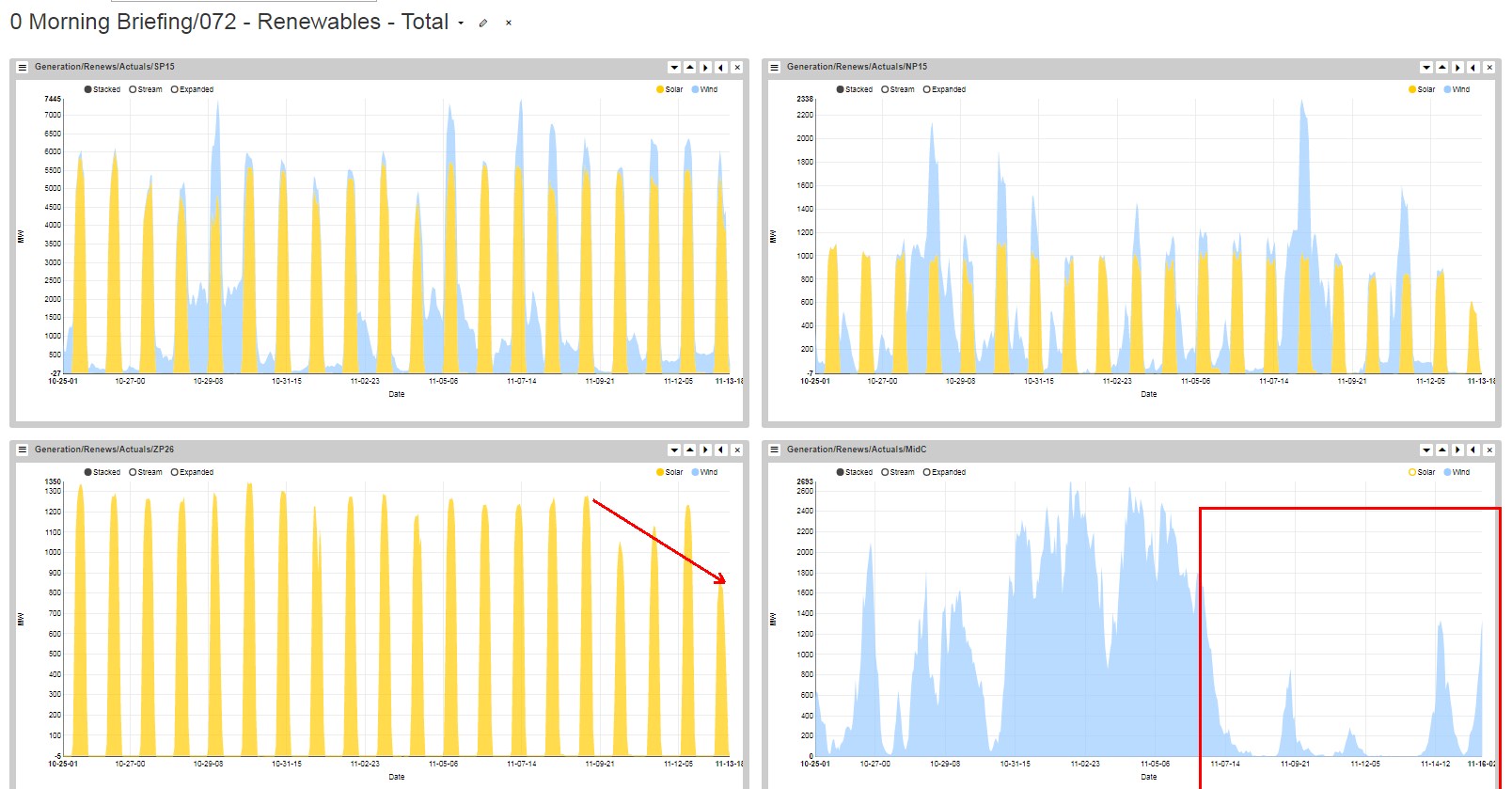 This is a fun report; it compares the current week’s Northwest fundies against the last ten years for a variety of metrics. The big takeaways are a massive loss of thermal (Sumas-related) and no wind all of which drives minimal exports.

Both BOM and Dec are projected to be near-record low water months, per the STP. But it is the Jan-Feb we find more interesting, especially the Jan. Contrast the current forecast with the last six years. Now overlay that bleak supply outlook with cuts at Sumas. Toss in some 20-degree weather at Portland and you just concocted a witches brew of rolling blackouts in the green Northwest. Ouch, I live here. 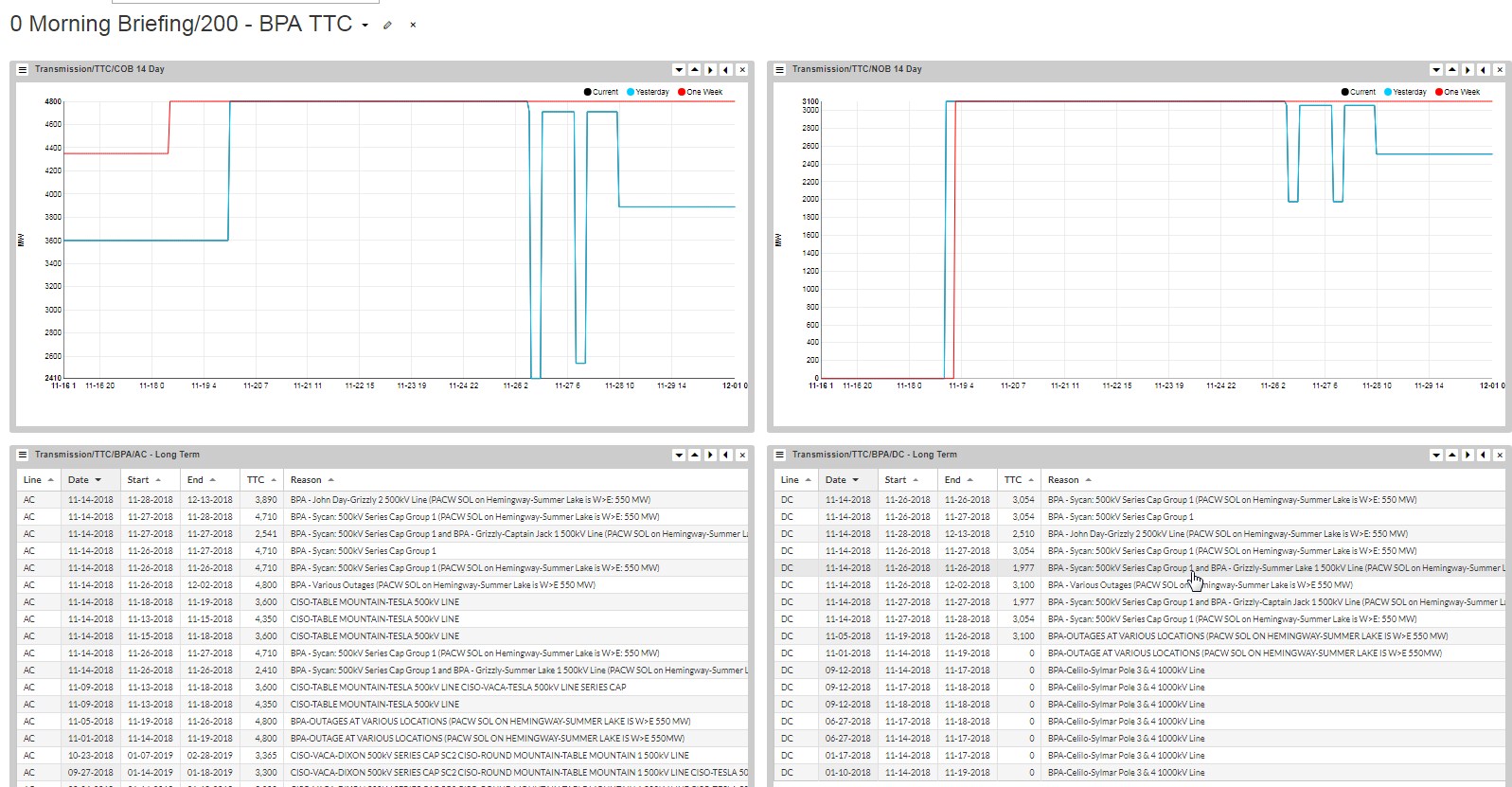 Nothing startling in BPA’s TTC outlook, the DC returns on Sunday and the AC gets a haircut, but we doubt any of that matters since little energy will be flowing south, not as long as Sumas is posting double digits.

Sadly, we had to pull our Path 15/26 charts; I loved those. What System Operator reports less data? Not PJM, they would never pull a wicked stunt like CAISO just did. And all you utes are just dying to join the EIM. Good luck with that.

The Northwest remains a scary place to be short, at least until Sumas starts receiving more Westcoast gas. You’d think the re-pressuring to 80% has been implemented, but doesn’t seem like that when looking at flows at Station 4. The Socal issue should be resolved this weekend, but they have another outage in a few weeks. In the next post, to follow shortly, we’ll look at both SP and MidC via the spreads.