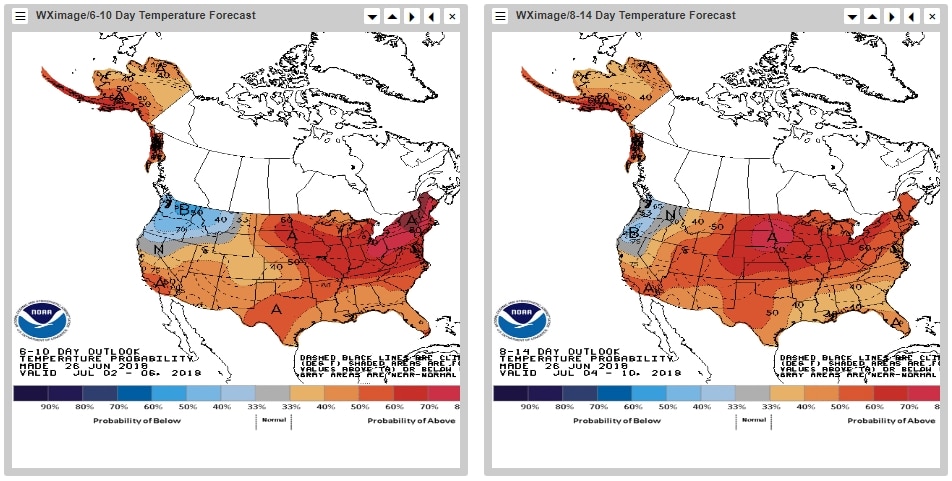 Look for Seattle and Portland to continue their cooling trend into next week while the eastern side of the Northwest makes a slow return to normal.  Southern California should stay above normal for most of the next 14 days, while the Southwest moves from normal to above normal. 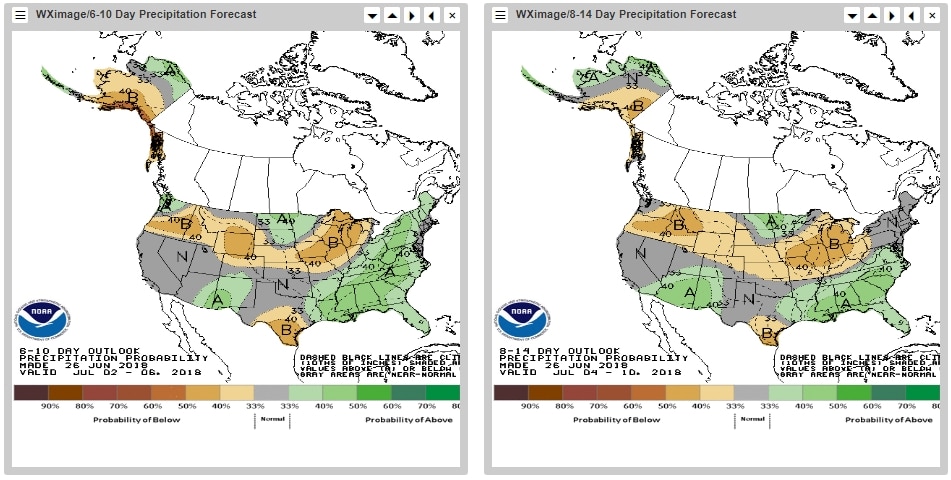 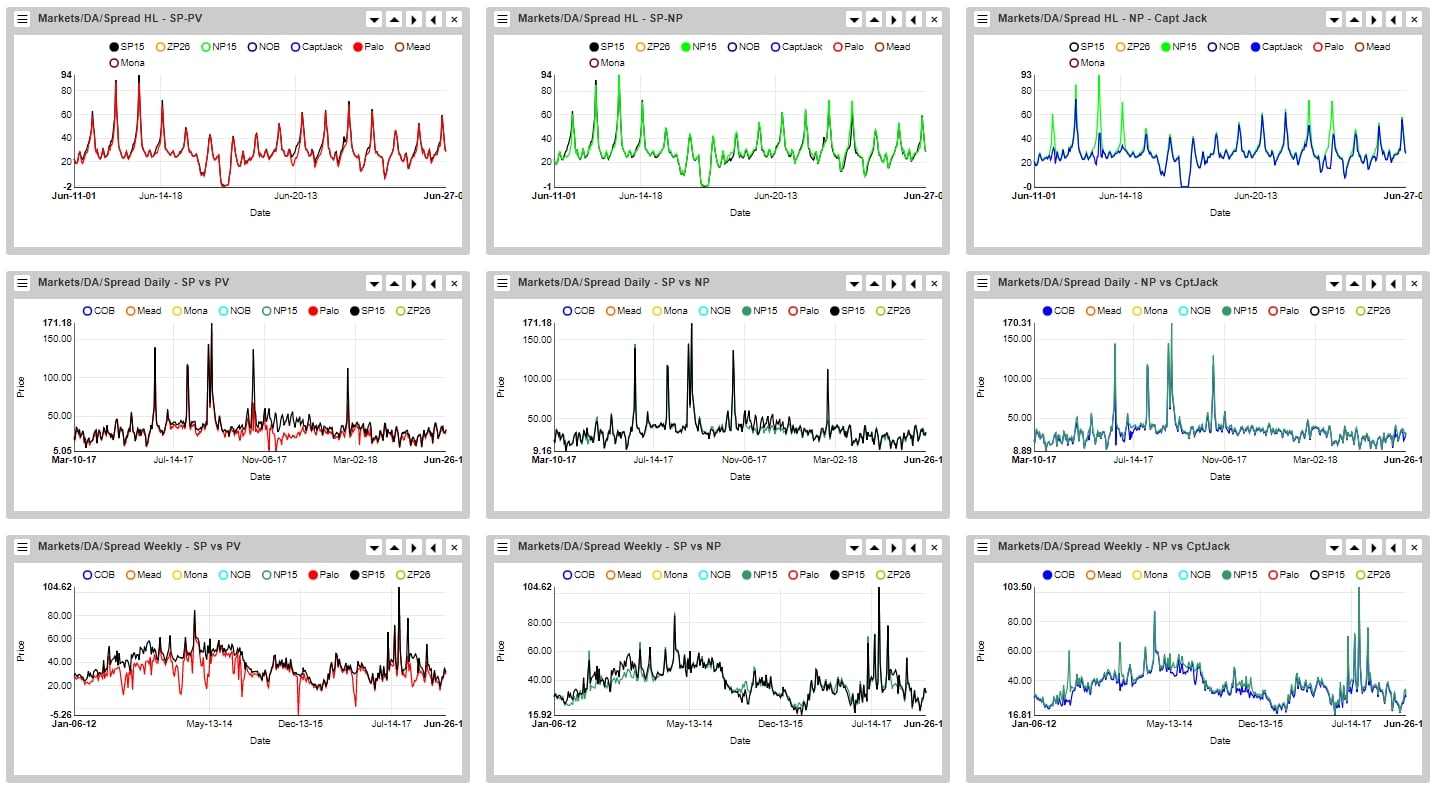 Tight prices in SP-PV day ahead as congestion greater than $2 hasn’t shown in the chart for days.

AECO is up $0.60 week-on-week but is flat day-on-day.  Citygate increased $1.30 week-on-week, but that would include prices reaching as high as $3.79 on the 21st, and as low as $2.53 last Friday.  Northwest Sumas is looking much less volatile compared to last week as it’s stabilized at $1.88 for consecutive days. 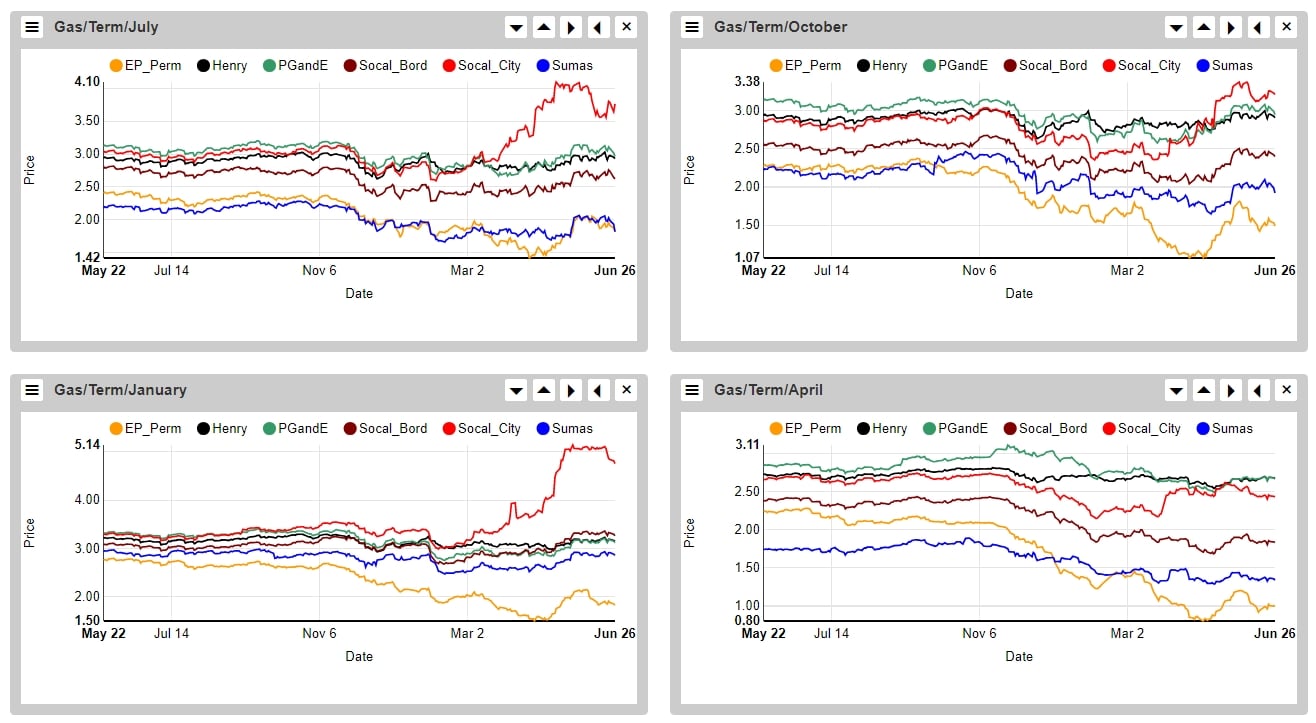 SocalCity January is still moving along a relatively steep decline as it’s shed $0.35 since the 18th and 6 cents overnights. 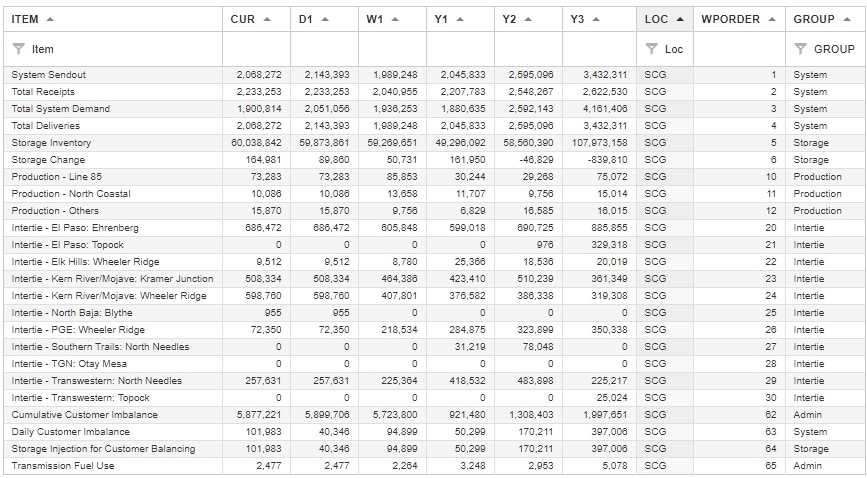 Northern California made a brief dip below 0 on the 23rd with 19,000 MCF in withdrawals.  Storage has remained positive since then, but at levels far from what we were seeing earlier in the month. 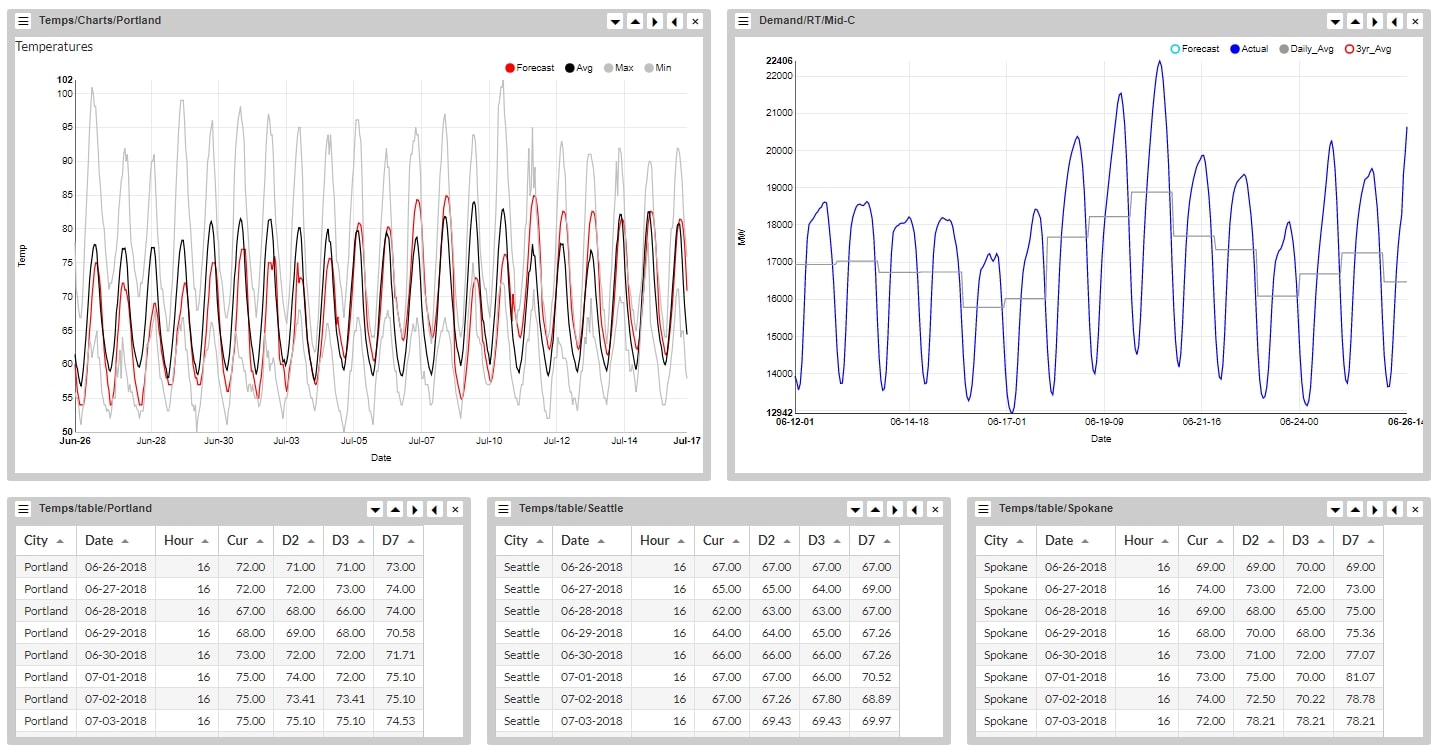 Portland isn’t projecting highs to reach above 80 until well into the next month (July 5th), and should stay well below normal until then as well.  Seattle is on a similar path and will see a high of just 65 by the 28th, eight degrees below normal. 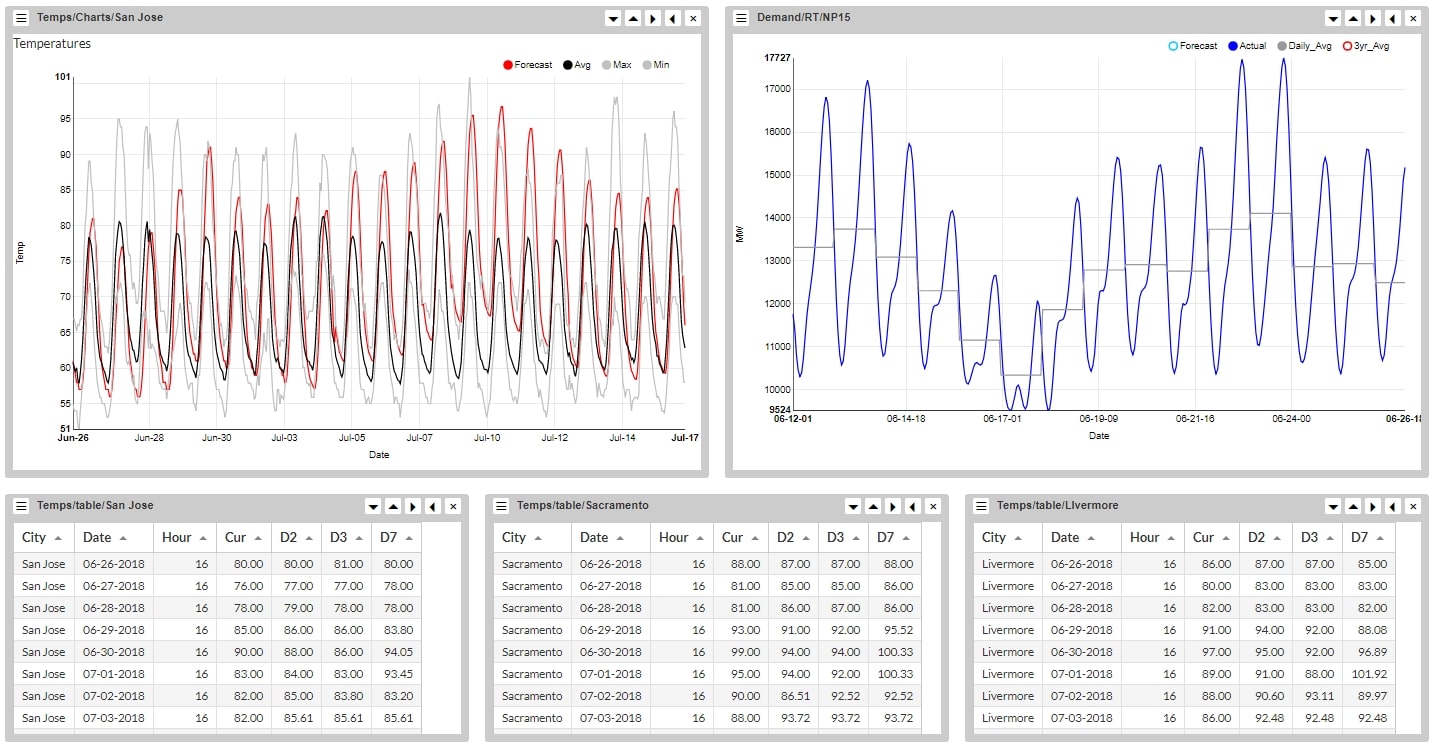 Light load demand was up over 300 MW yesterday and that increase carried through the day.  Monday’s average daily loads were up 150 MW week-on-week.

San Jose shows daily highs at or below normal for the next two days before temps shoot into the 90s by the 30th, hitting 91 and 13 degrees above normal.  91 in San Jose will translate to triple digits for Sacramento as that city hits 101 on the same day.  Keep an eye on the 9th and 10th in Sacramento where temps are forecasted at 108 for both days. 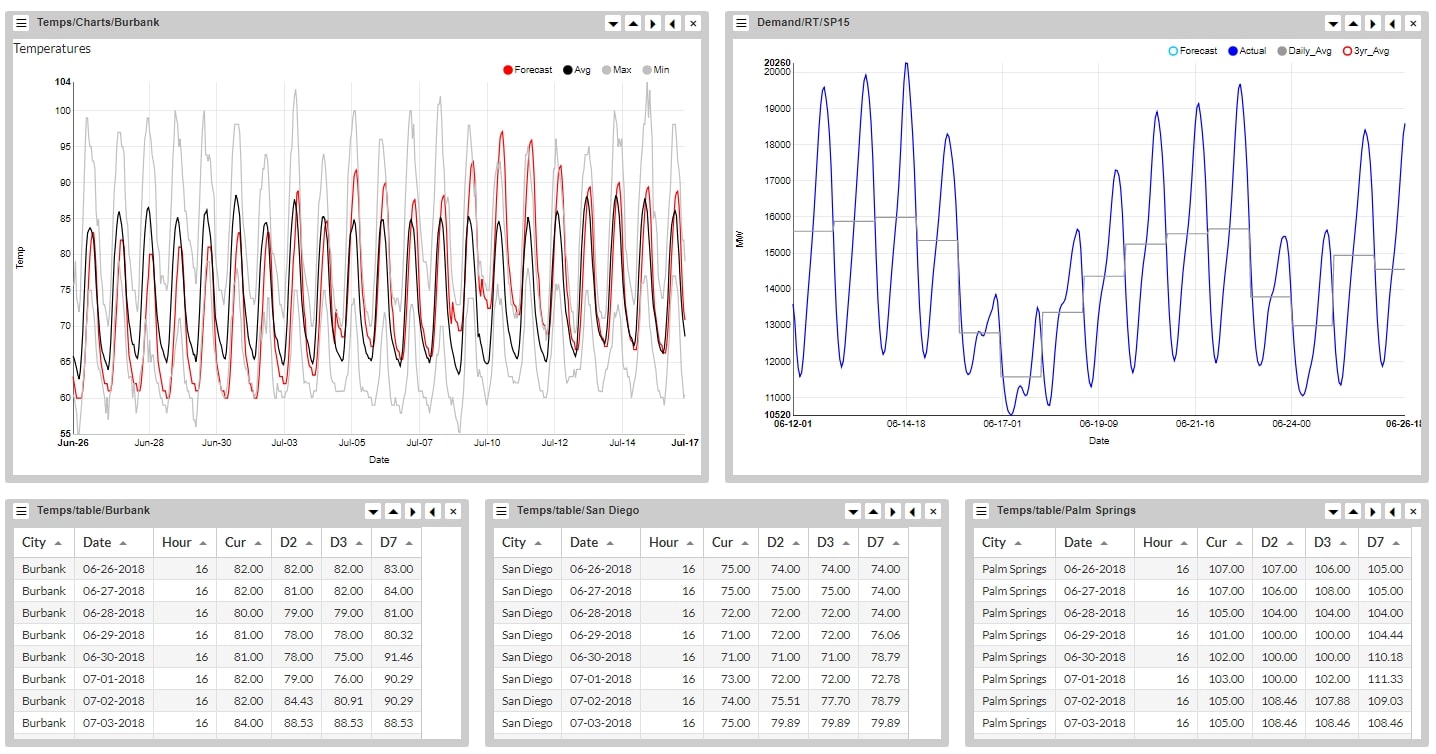 Off peak loads jumped 520 MW yesterday compared to Monday, while heavy loads increased as well, albeit not as high.  Monday’s daily average finished up more than 1,500 MW week-on-week.

Burbank is forecasting below average until the 3rd when temps begin to flirt with the 90’s.  Southern California is forecasting a heat wave around the 9th as well; Burbank shows highs in the upper-90’s. 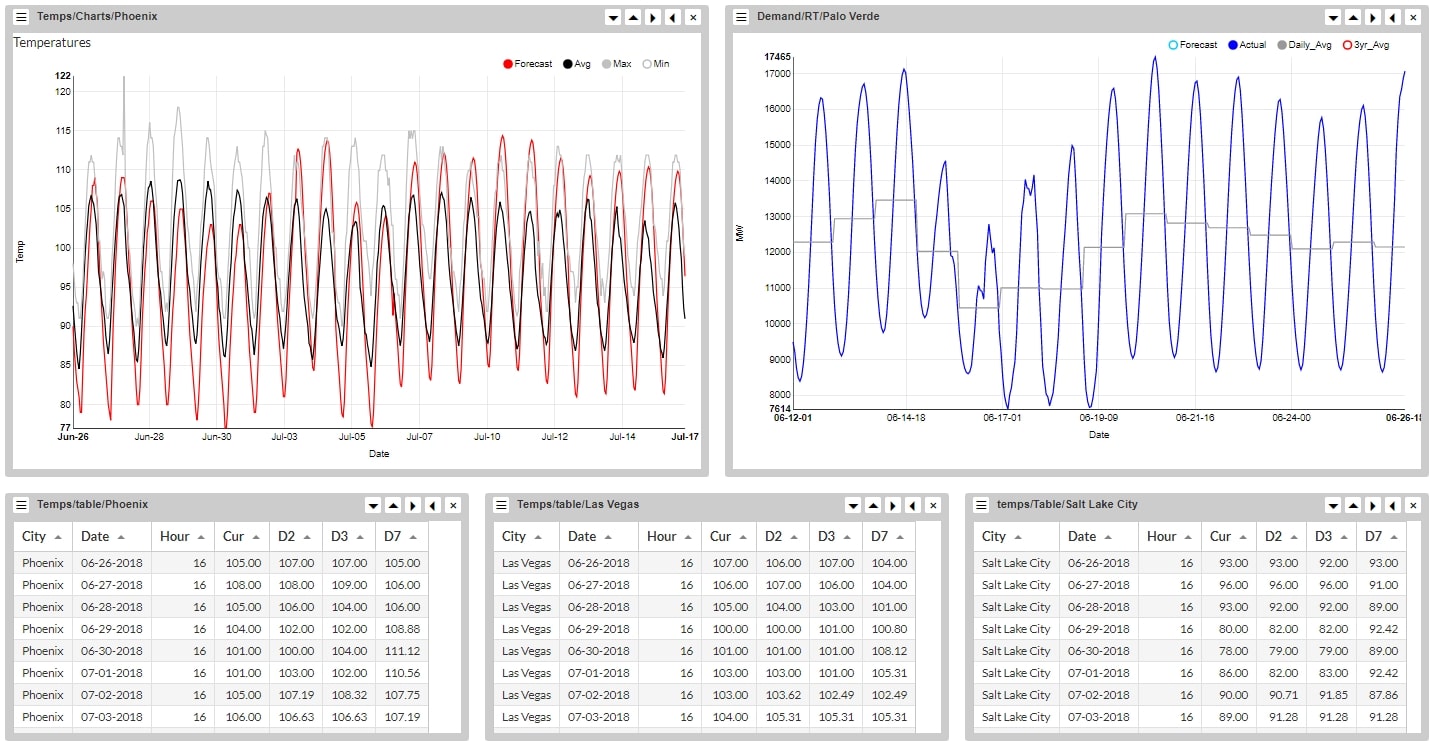 Phoenix shows a high of 109 today, but temps will drop to 103 to round out the work week.  Still hot, but now four degrees below normal.  The 4th of July may be a holiday, but it comes with a forecasted high of 114.

Vegas should get similar highs on the 4th, though some of the largest anomalies in its forecast show up as daily lows.  The 29th shows lows falling to 76, nine degrees below normal, and a welcome reprieve from the heat. 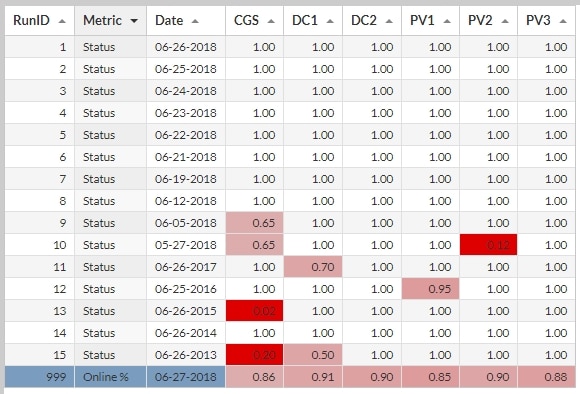 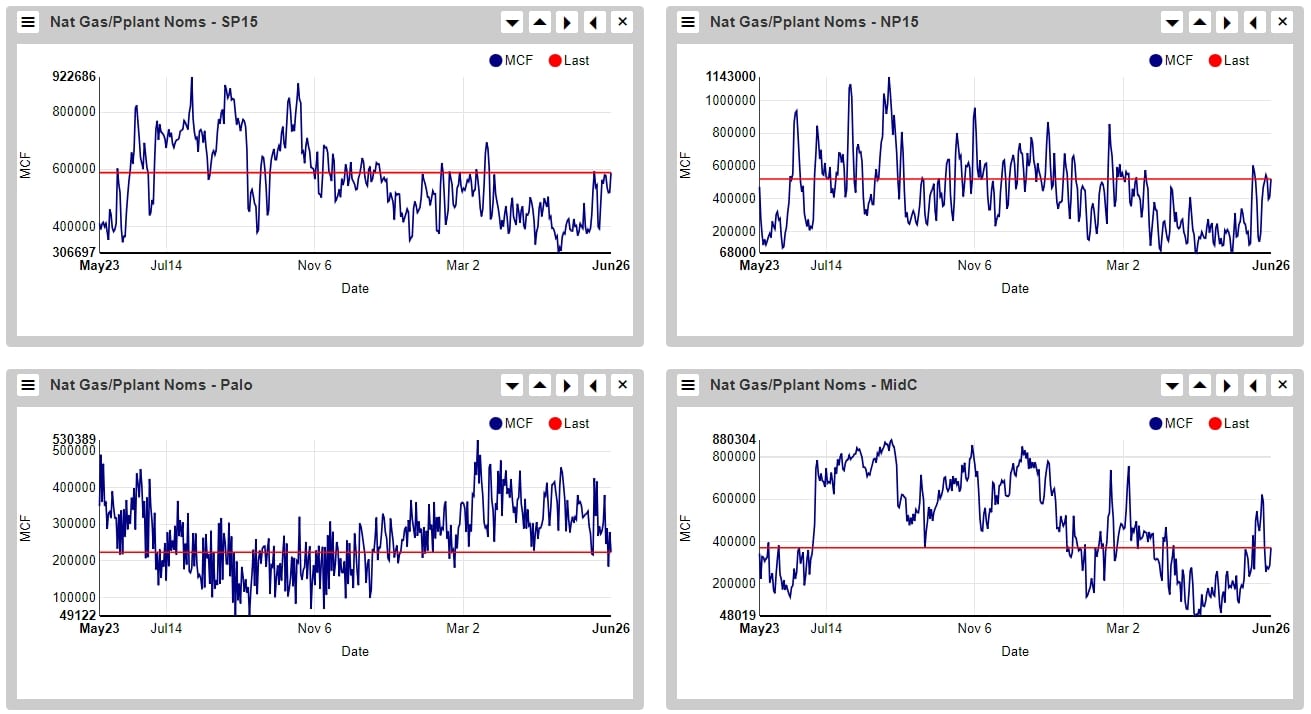 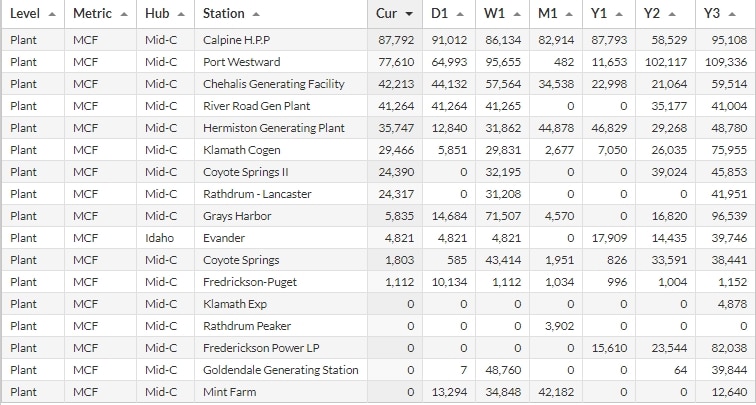 Coyote Springs II and Rathdrum – Lancaster both increased from 0 MCF on Monday to over 24,000 MCF yesterday.  Mint Farm moved the other direction after dropping to 0 MCF from 13,294 MCF on Monday. 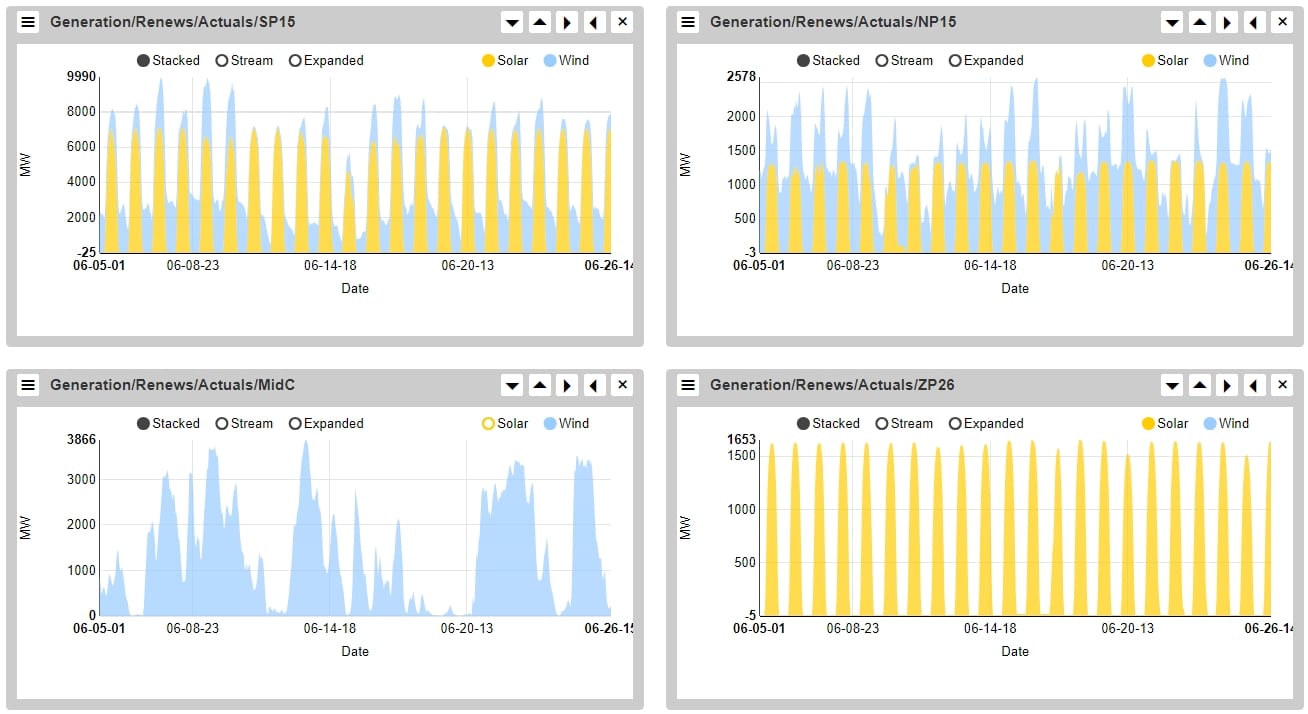 Mid-C wind had sustained 3,000+ MW for 18 hours on Monday, but that all but disappeared yesterday as no hour was able to generate more than 1,600 (and that came in the early morning, by afternoon that fell to 200 MW). 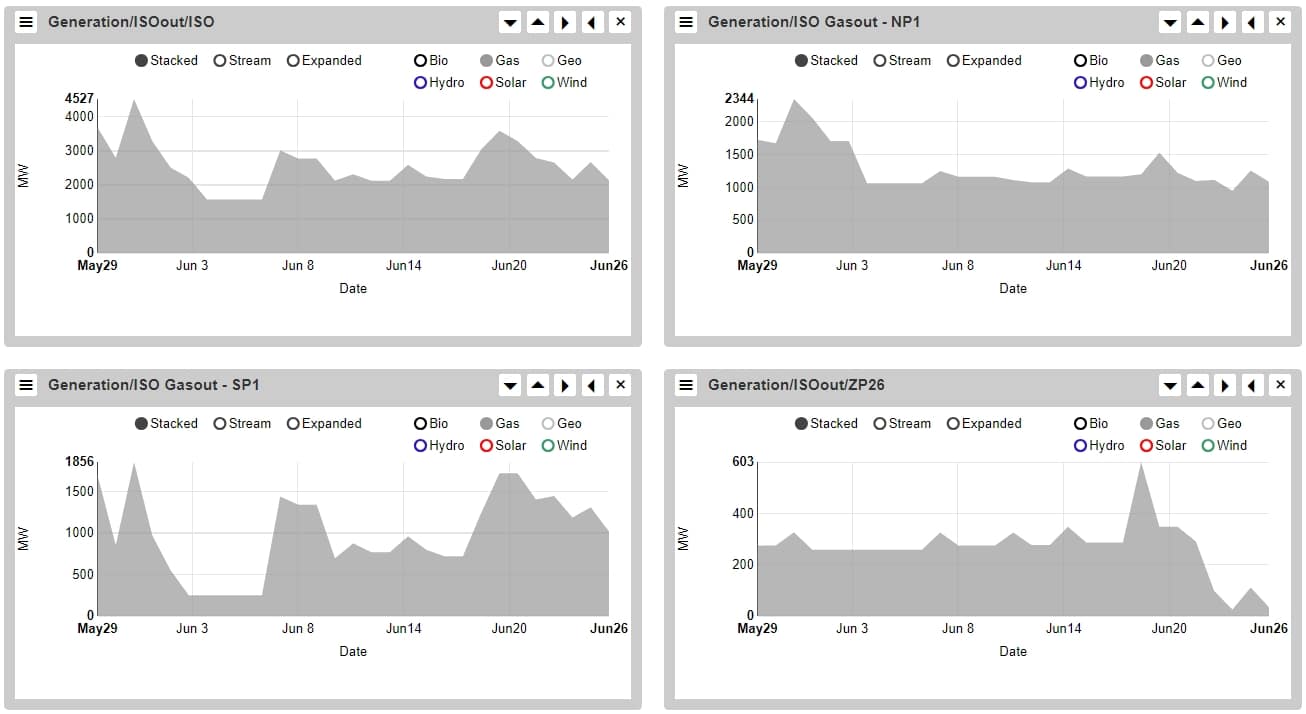 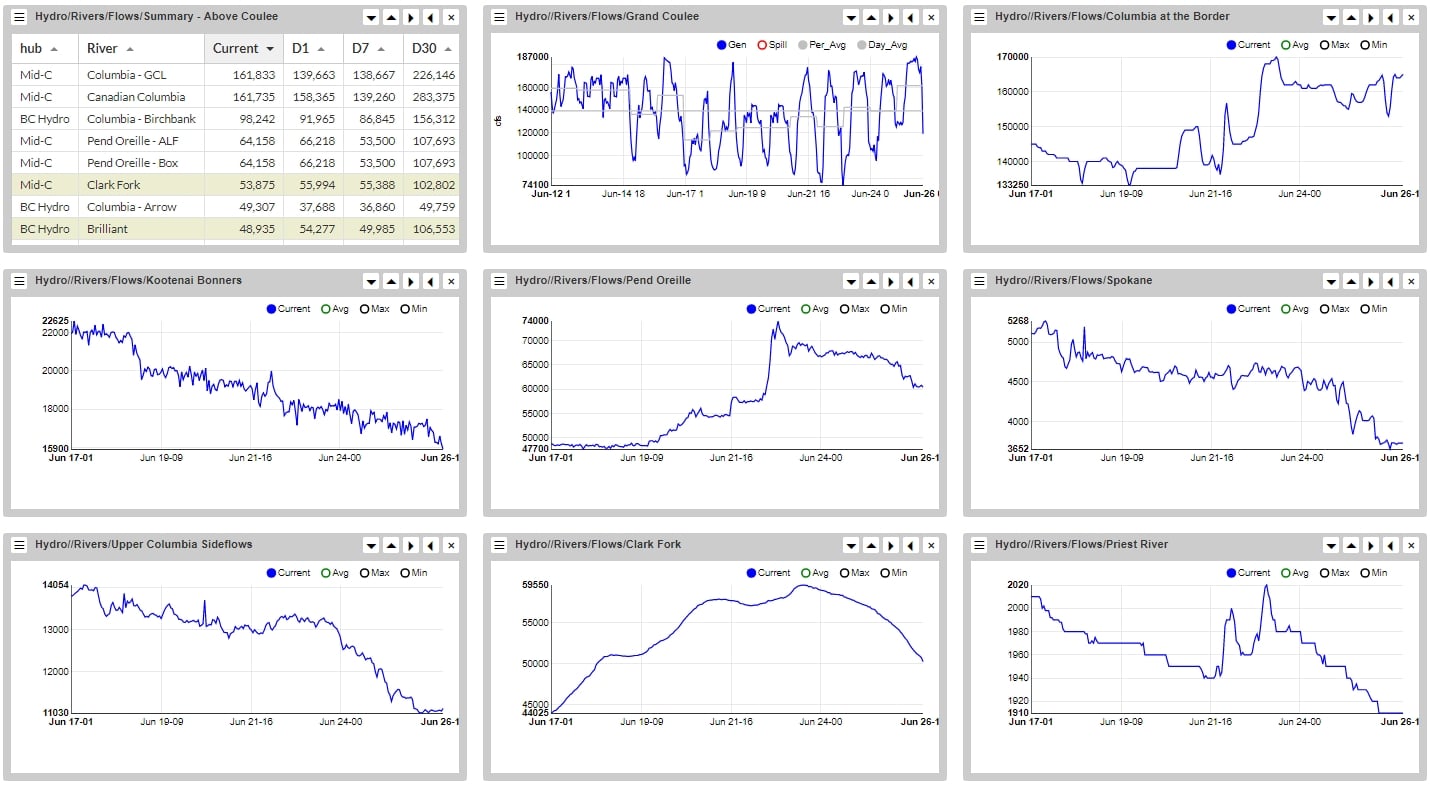 The Clark Fork river topped out at 59,525 CFS on the 23rd and has been rapidly declining ever since, sitting at 50,250 CFS yesterday.  The Pend Oreille is following a similar pattern as well after topping out (for a second time) at 74,000 CFS on the 22nd. 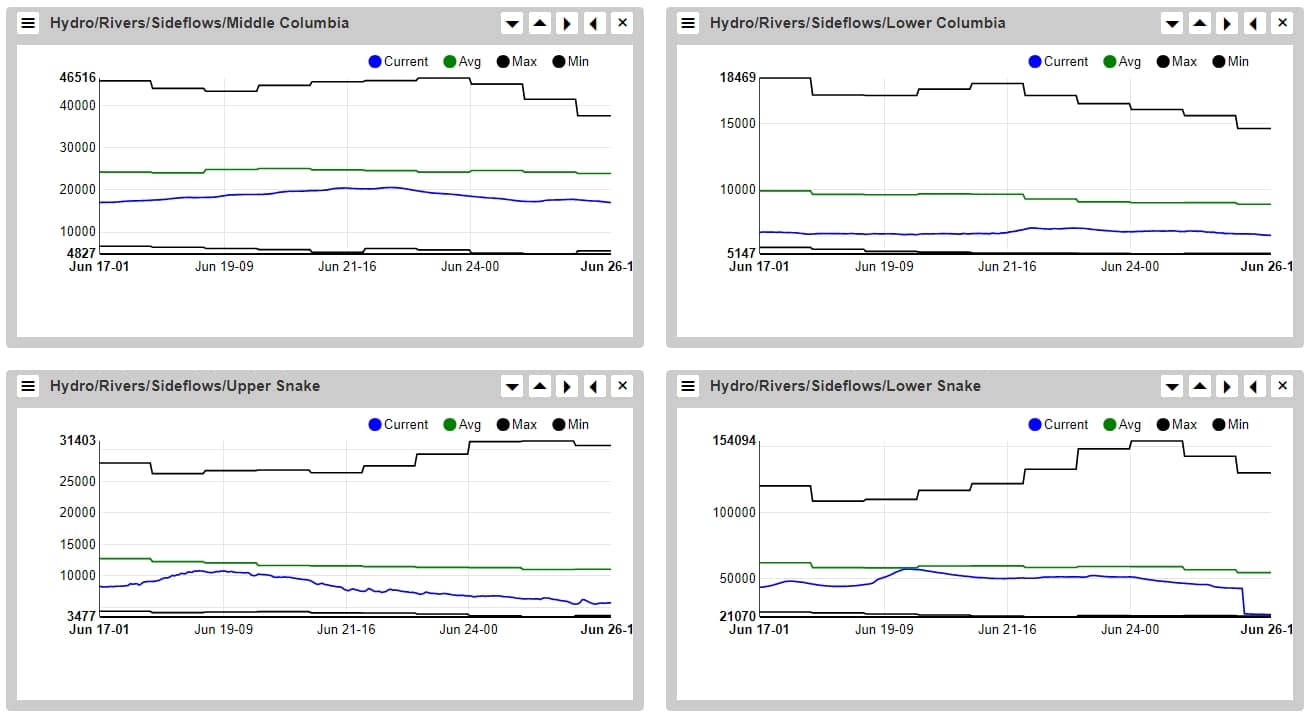 All four sideflows lost ground on the average line since last week.

Grand Coulee is holding steady at 1,285 ft while Libby, Dworshak and Hungry Horse continue to fill. 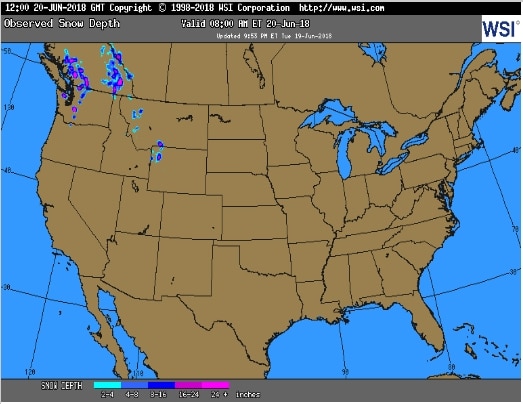 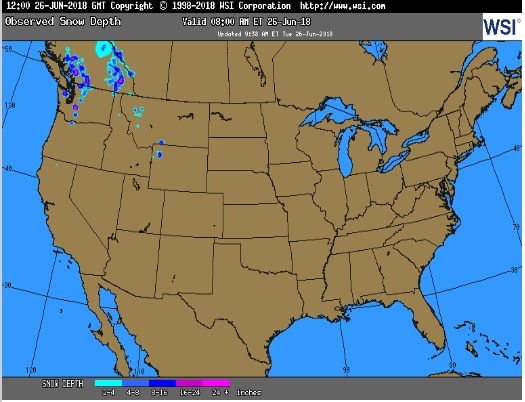 Aaaaaand it’s gone.  Almost, anyway.  There are still a few pockets of snowpack in Western Montana and Wyoming. 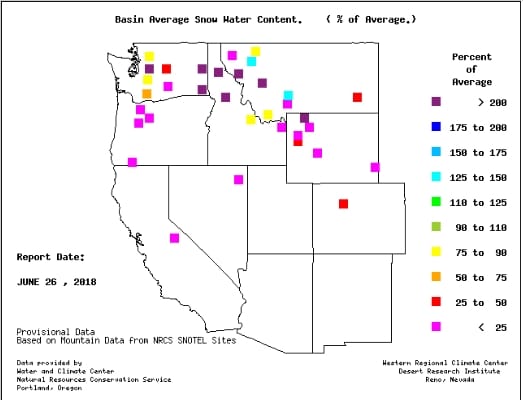 Late June snowpack, as little as it may be, equates to heavy snow anomalies. 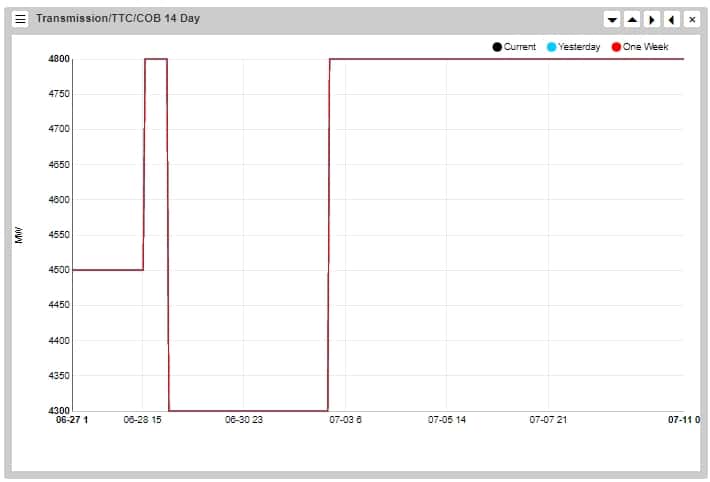 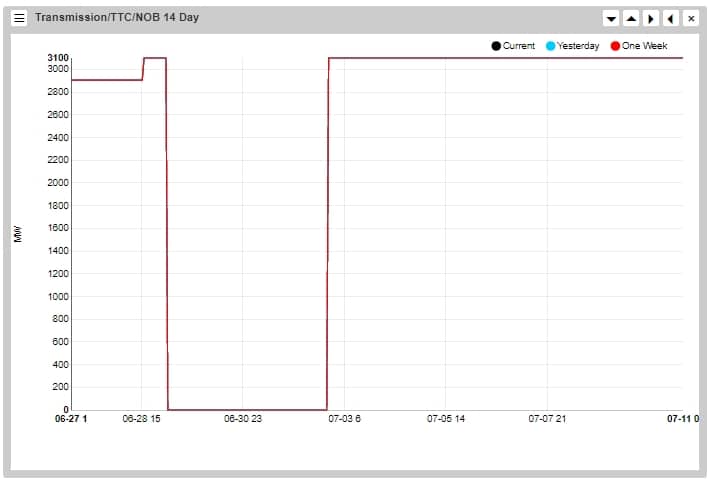 No changes in TTC for either line this week.