The WECC continues to be battered by exceptionally mild to cool weather, all except the deserts where Phoenix, Vegas, and Palm Springs are all in the mid 100s. The coastal load centers have missed the party so far, but that only means the party is deferred, summer isn’t over, winter isn’t coming. 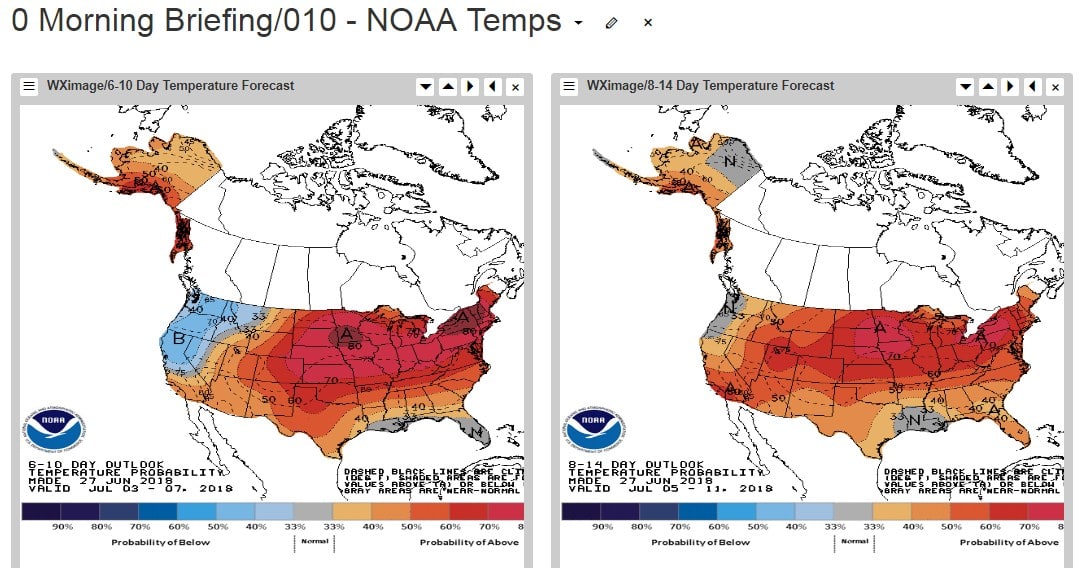 That 6-10 day is just brutishly cold, though the 8-14 day rebounds in MidC and NP and even has hints of Socal Coastal heat. This dearth of loads is showing up in storage, gas that is… 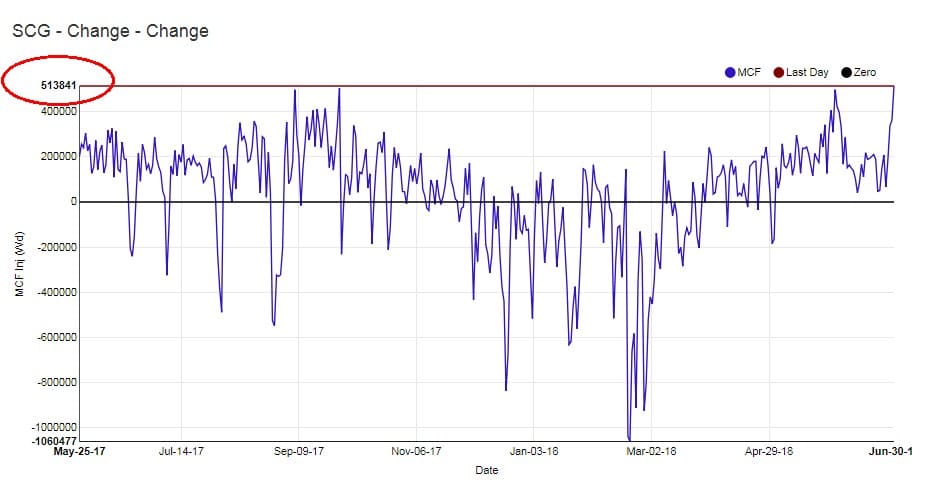 Socal Gas set a one year record for injections yesterday and is now sitting on 11 bcf more than last year, though nowhere close to the pre-Aliso levels. Still, if you were nervous last year (and you should have been), you can be 11 BCF less nervous this year. The problem, the longs rightly point out, isn’t molecules it is a daily pass-through cap. SCG can’t serve all its loads on extreme days which we’ll conveniently define as greater than three bcf of daily demand. How often does that happen?

Ignoring the dead of winter, when it happens frequently (check out 2016), there are not a lot of instances in early summer or early winter. In fact, we counted two July events and three November. Why did we count July and November? Because we noted some awkward term price movements in those two bullets. 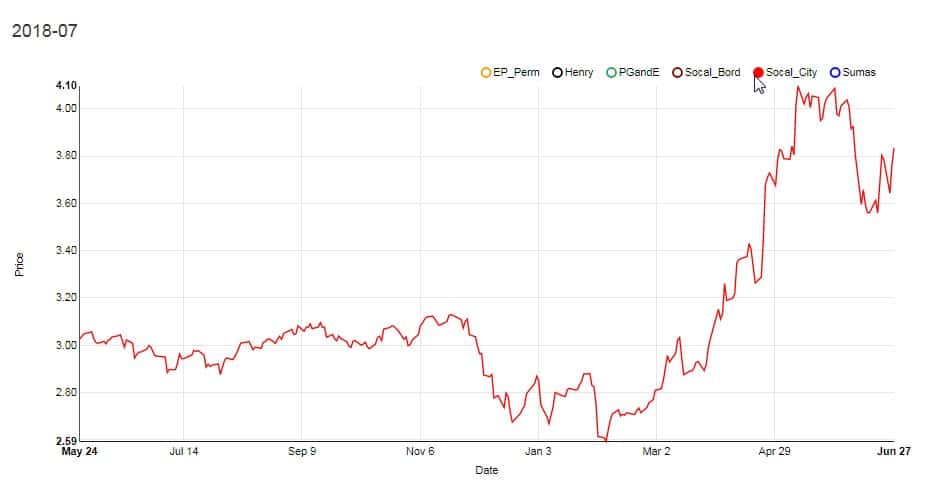 July cratered, now has enjoyed a sustained rally for the past ten days. 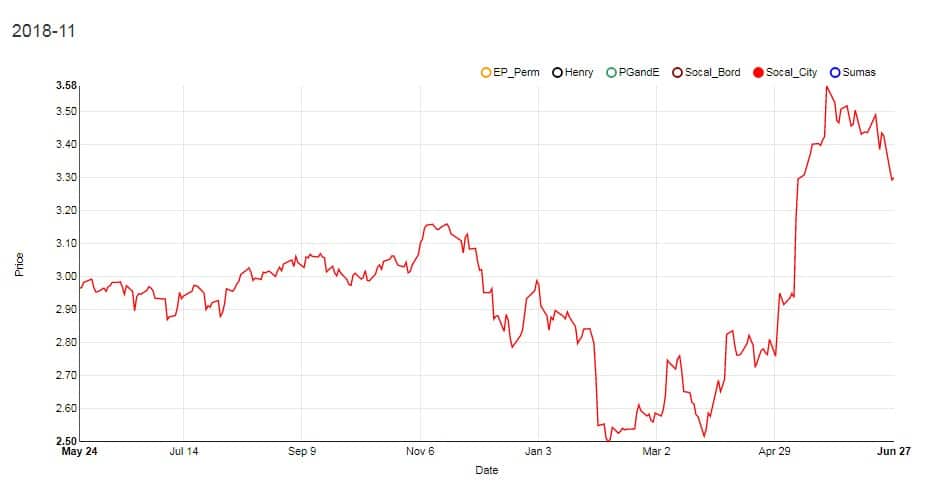 While November has enjoyed a sustained crash for the past twenty days and is dropping faster over the last few days. Why would November trades under July when the likelihood of an “event” is less? That is a question best left for better gas minds than this author’s, my job is to point out oddities and that July-Nov move is odd, at least to me. Also, keep in mind that this move has taken place while Nymex has been on a bull run. 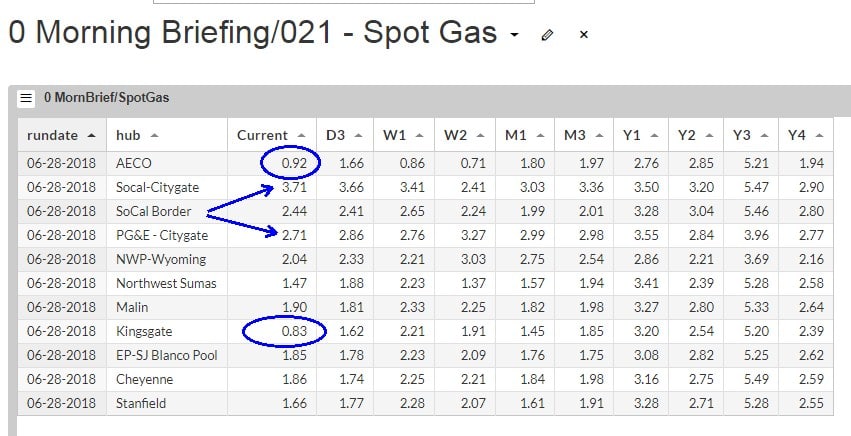 Check out the collapse in BC gas trying to eek a way into the USA. It’s trading like Trump’s trying to slap tariffs on it, but he isn’t. Instead, the dearth of WECC demand has stranded gas in Canada, and now it has “busted the buck.”

Forget Canada, the SCG|PG&E spread is back to a buck without any SCG demand, and after record injections. Talk about a fundamental disconnect, but it does explain why July has rallied of late. Spot gas is bullish despite bearish fundamentals, so what does SCG do when SP is bullish? Makes it seem like there is more going on behind the curtain than I know.

We mentioned SP was weak, right?

How about a 7k heat rate at the end of June weak? Spot gas trades like there is load not served, go figure.

Today is the last day of Prompt; tomorrow it will be August. The southwest hubs have seen some rallies in the last few days, but the MidC tanked in sympathy with BOM. More on that MidC meltdown in the Hydro section.

Just blue, nothing else need be said. Cold and no heat in the near horizon.

There are flickers of life at NP, a rally over the weekend (of course it is over the weekend) but there is heat in the 8-14 day, reasonably big heat. Let’s watch closely to see if it moves into the seven day by Monday.

Mild temps in Socal without the NP weekend rally. Maybe hints in the 8-14 day but the numbers don’t match NOAA’s picture.

PV is a real hub, it even teases us with a 118-degree day on day 9 – that is hot and will set a record if it comes to fruition. Check out the Salt Lake heat yesterday.

All the nukes are running, and there were no big ISO outages, that leaves just two blog fodder nuggets to share. 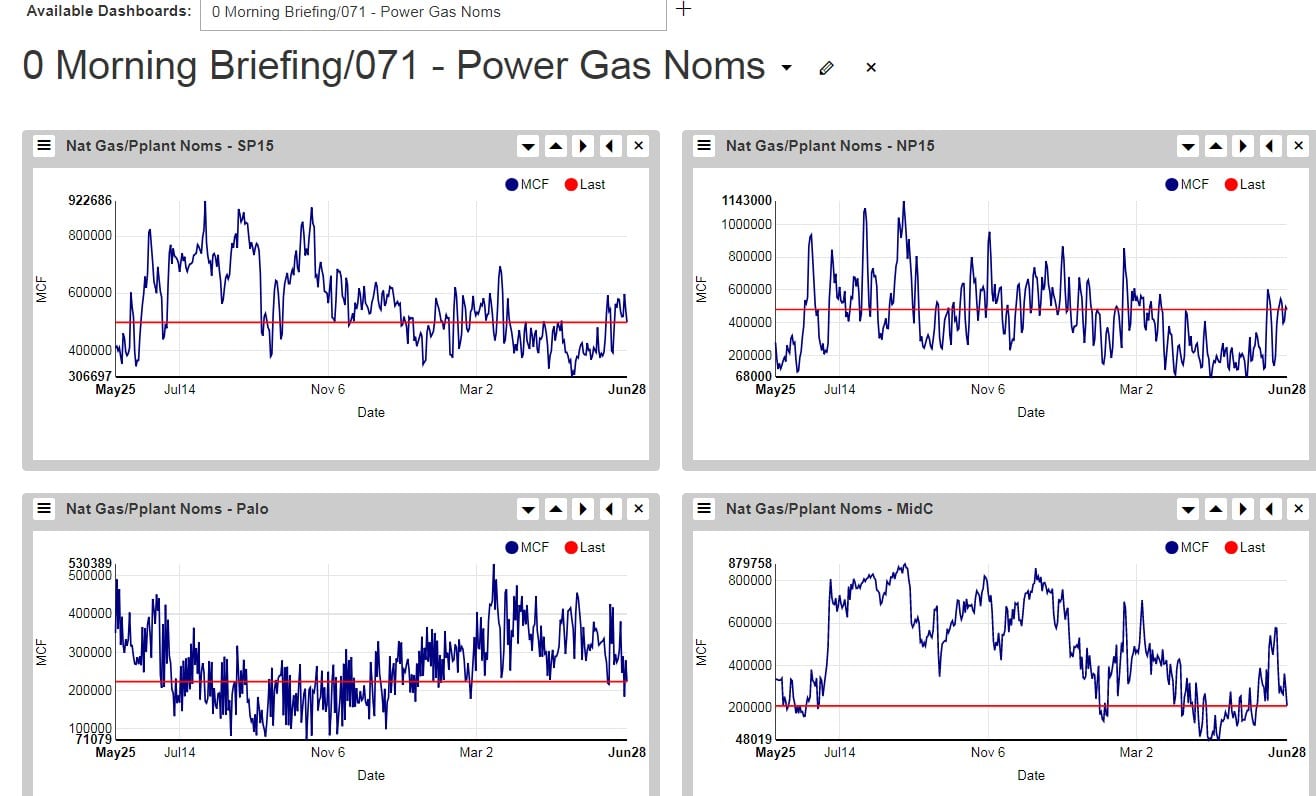 Noms at the Mid-C have collapsed off of cool weather, but the noms in the ISO are collectively at three-month highs. 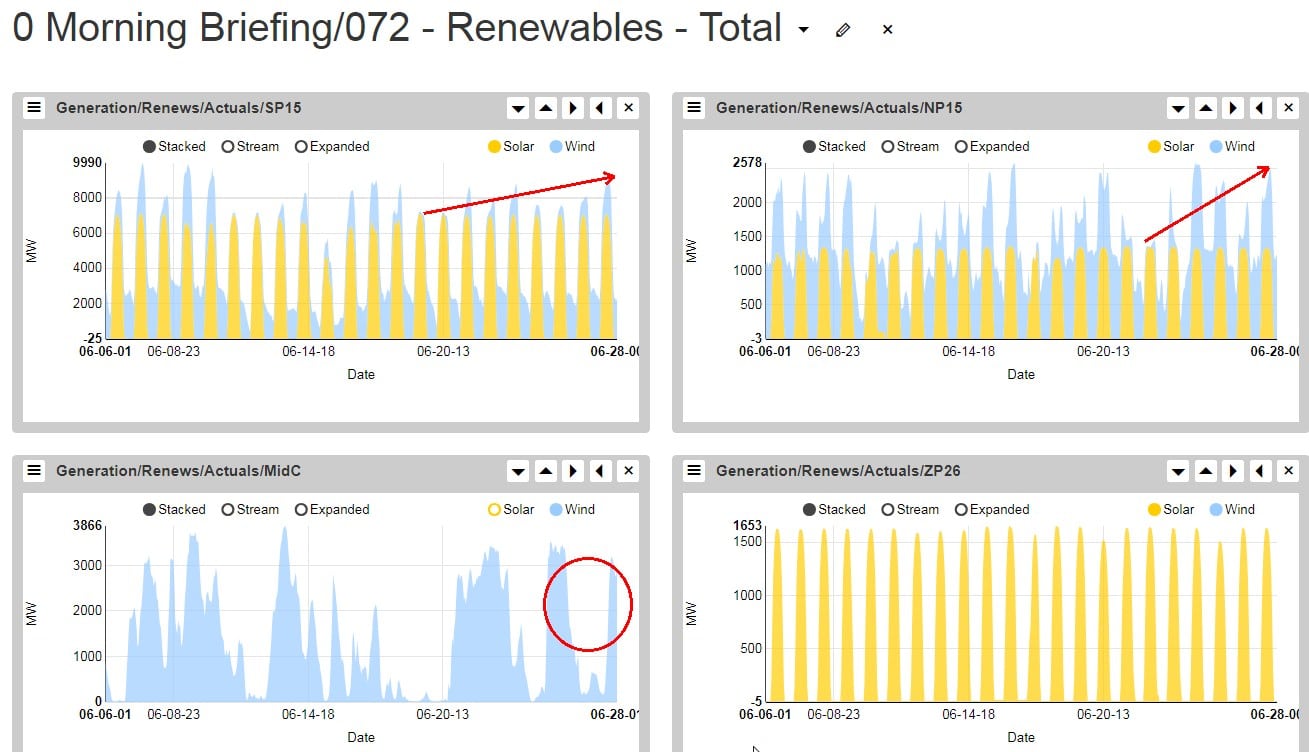 Some of that 7k LMP heat rate can be explained by the blustery and robust wind production yesterday. Mid-C’s was peaky; there was a becalmed period for about eight hours.

Let’s start with the reservoirs. 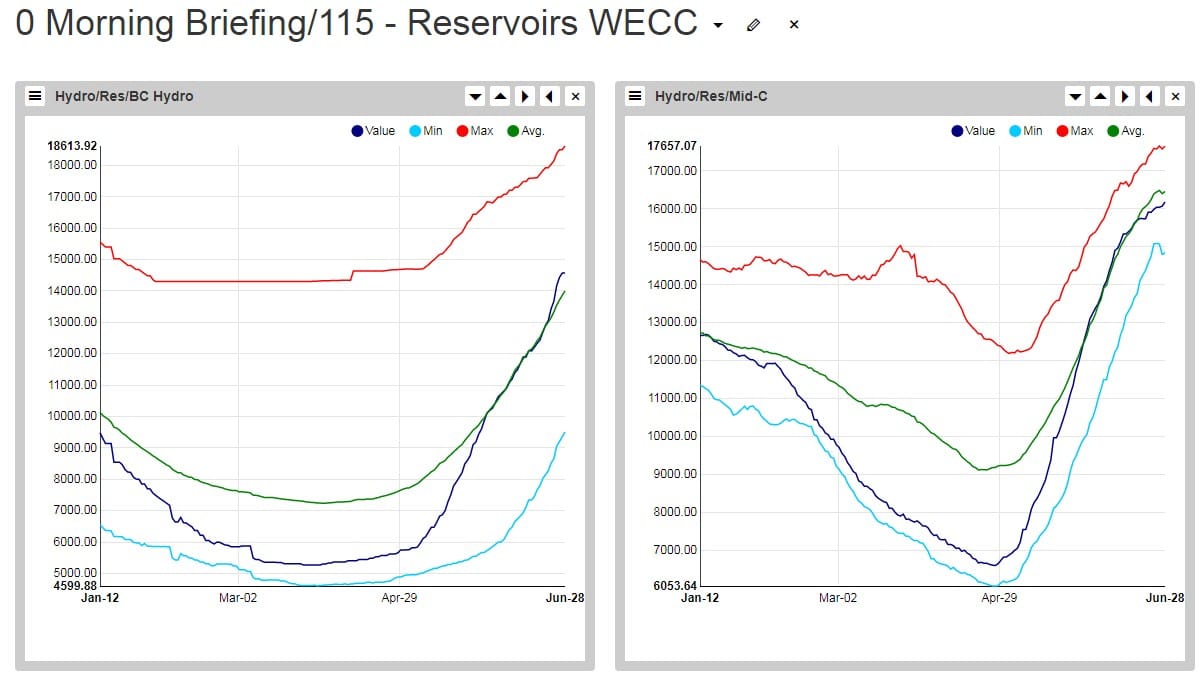 BC Hydro is now ahead of schedule (defined as average) while the USA Northwest is slightly behind. Let’s look at Coulee…

Just a few feet from functionally full and with no demand BPA’s biggest problem is filling too quickly – hence the massive rally in generation over the last week.

Discharge out of Arrow and Brilliant are up which explains most of the Columbia River at the Border Rally.

Very little of that extra water is coming from the USA, flows on the Pend Oreille are backing down and are slightly above a week ago; flows on the Spokane are not flowing, the river is down to 3kcfs. 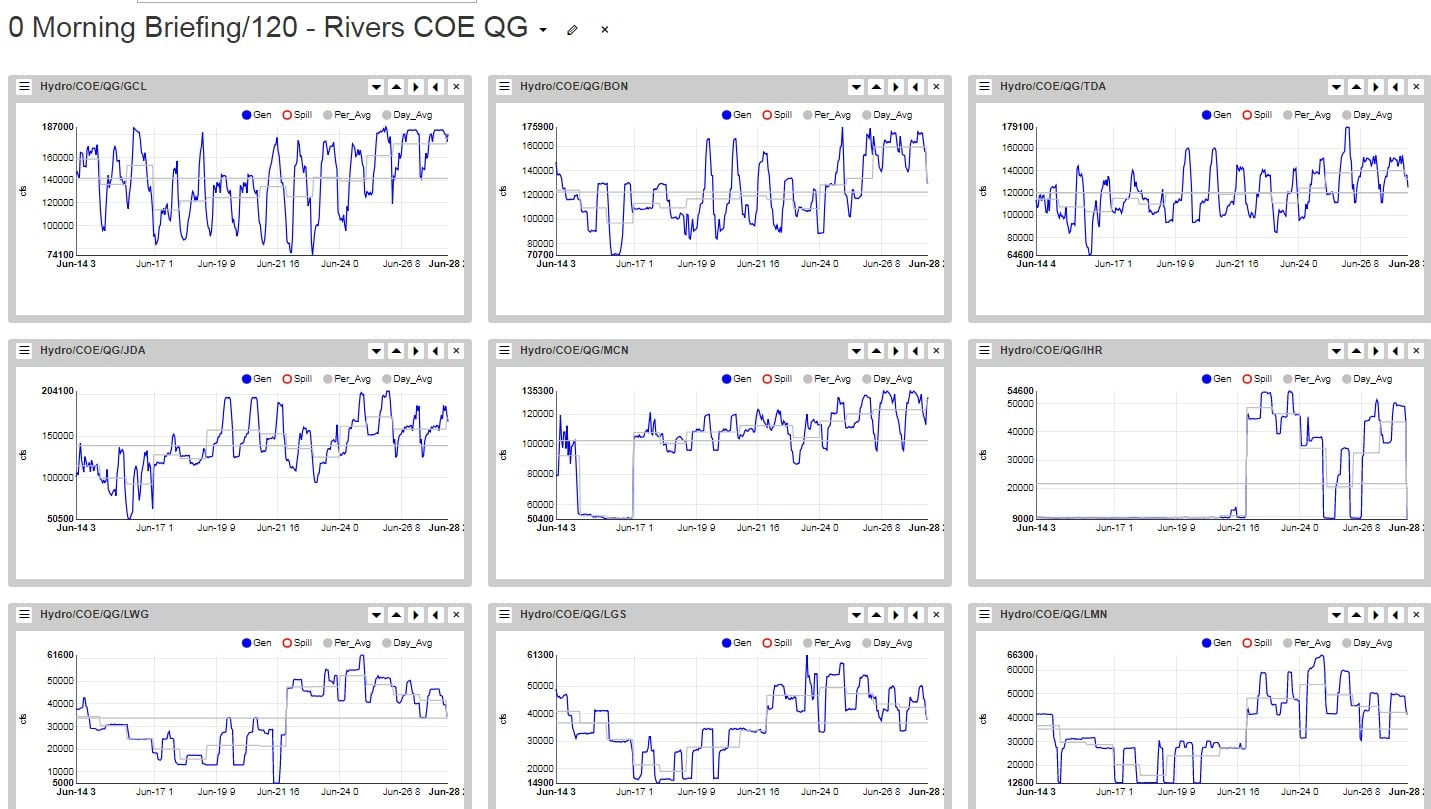 Mainstem energy production has stabilized, or maybe it is slightly up, all of which helps contribute to the MidC malaise. 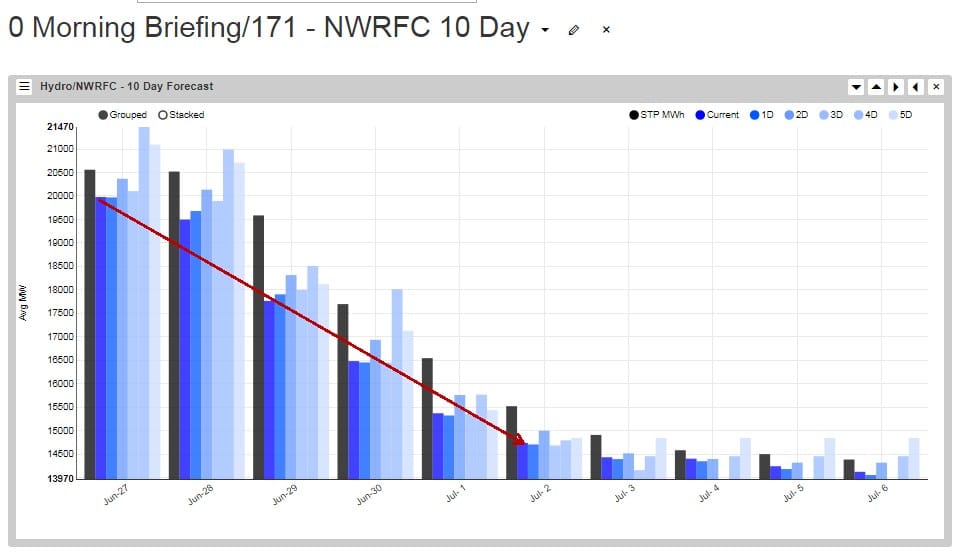 That malaise is short-lived; check out the NWRFC’s ten-day forecast. Over the next week, they are projecting a 5000 aMW drop in water equivalents. Now that is material and will help tighten up the MidC. 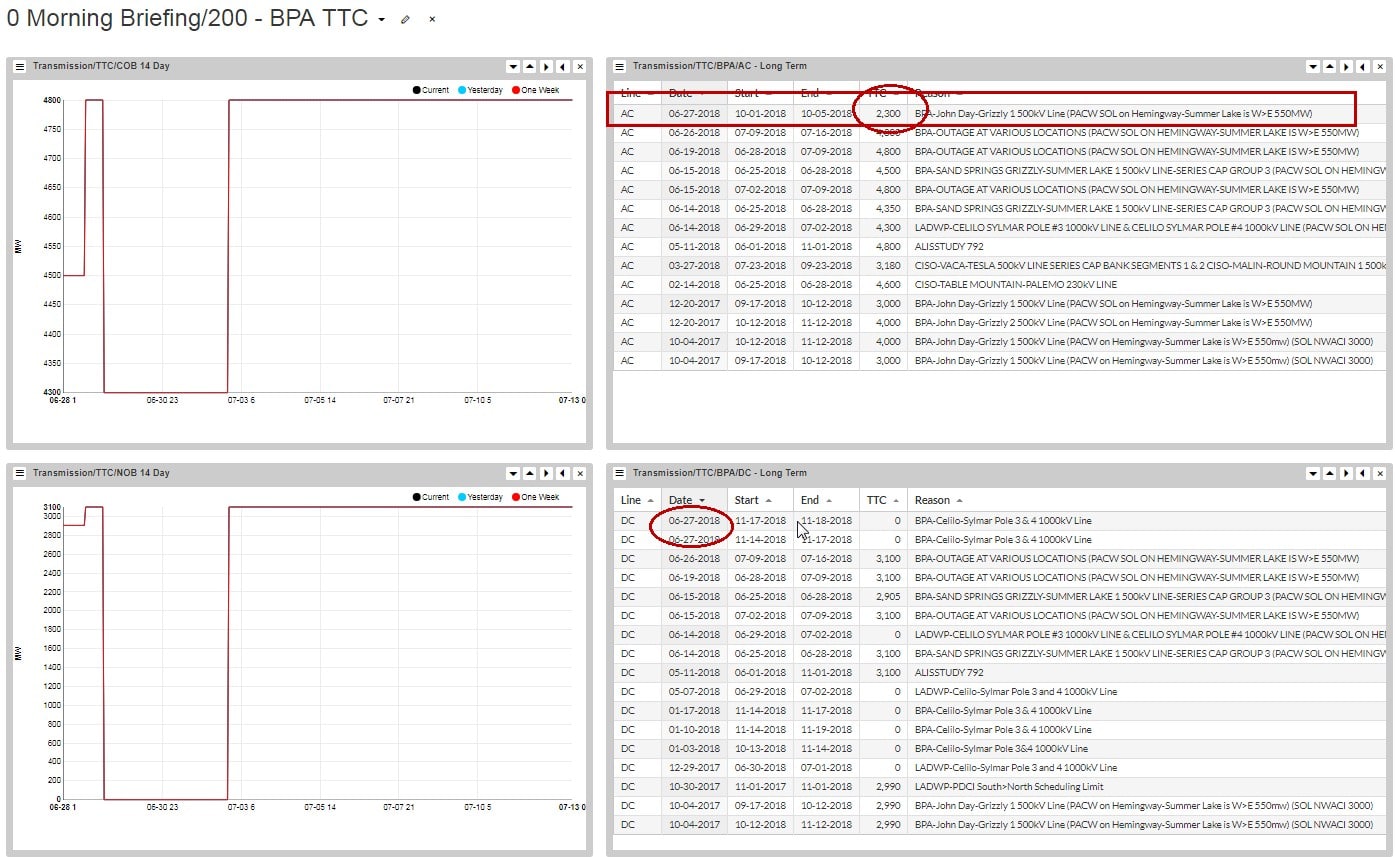 Heads up – BPA has added a new October outage on the AC, cutting TTC in half to 2300 MW for the first week of October. The DC isn’t down by then but this change just made October worth less.

Northbound flows on the NI rallied, all the other lines are just doing the same thing every day.

Hints of building heat in the south, we still haven’t solid confirmation yet, but there are teasers out there. The Northwest is heading into normal tight summer water, but that isn’t enough to buy, that zone needs heat that isn’t in the current forecast. Prices are relatively cheap; no one could be blamed for picking up a few lotto tickets.