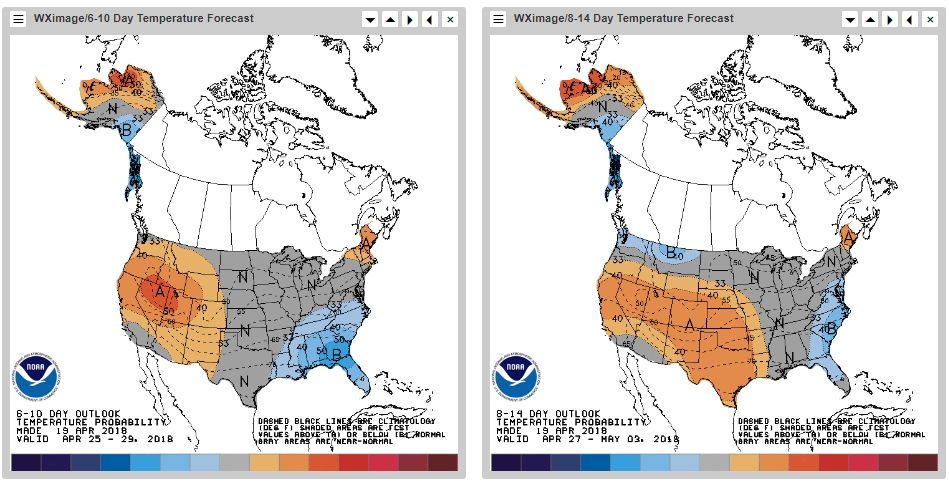 Warm temps have centralized over Northwestern Nevada after the forecast had focused further south.  The following week sees temps cooling in the northwest and a lack of high anomalies anywhere else in the west. 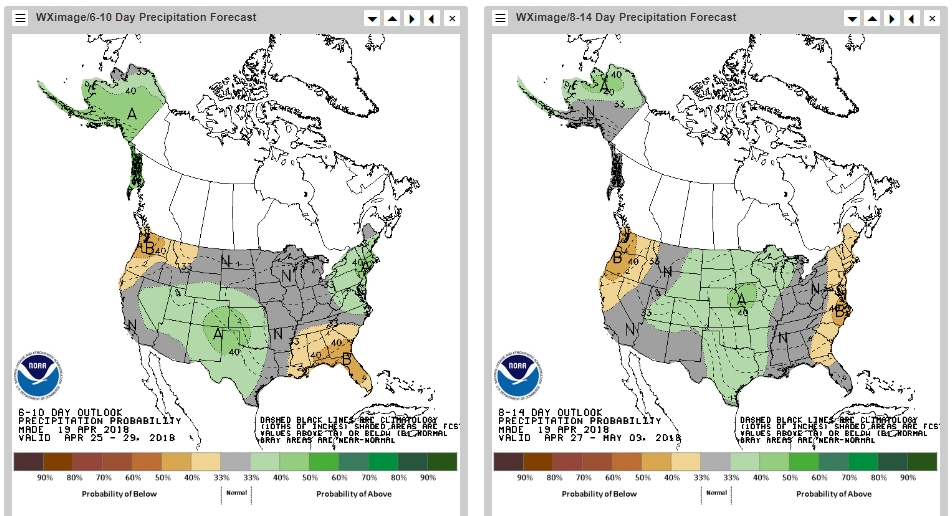 Rockies may see slightly more than normal precipitation while California and the Northwest project a dry 14 days.

AECO has fallen 38% over the last three days, by far the largest percentage movement across all hubs.  There was still plenty of movement however, as all other hubs fell $0.20 – $0.30 since Tuesday. 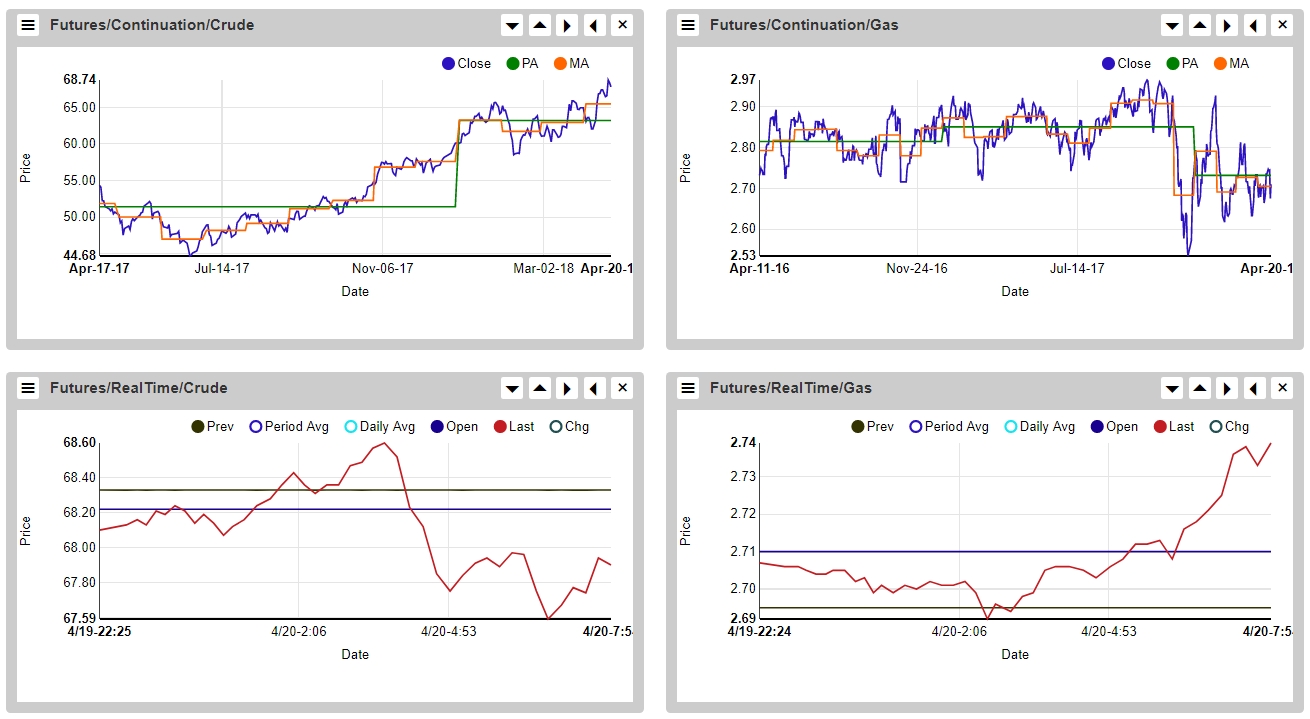 Crude fell one dollar earlier today, dropping from a high of $68.60 to $67.59 in a few hours.  Gas is ticking up this morning as well, having climbed five cents since the early morning hours. 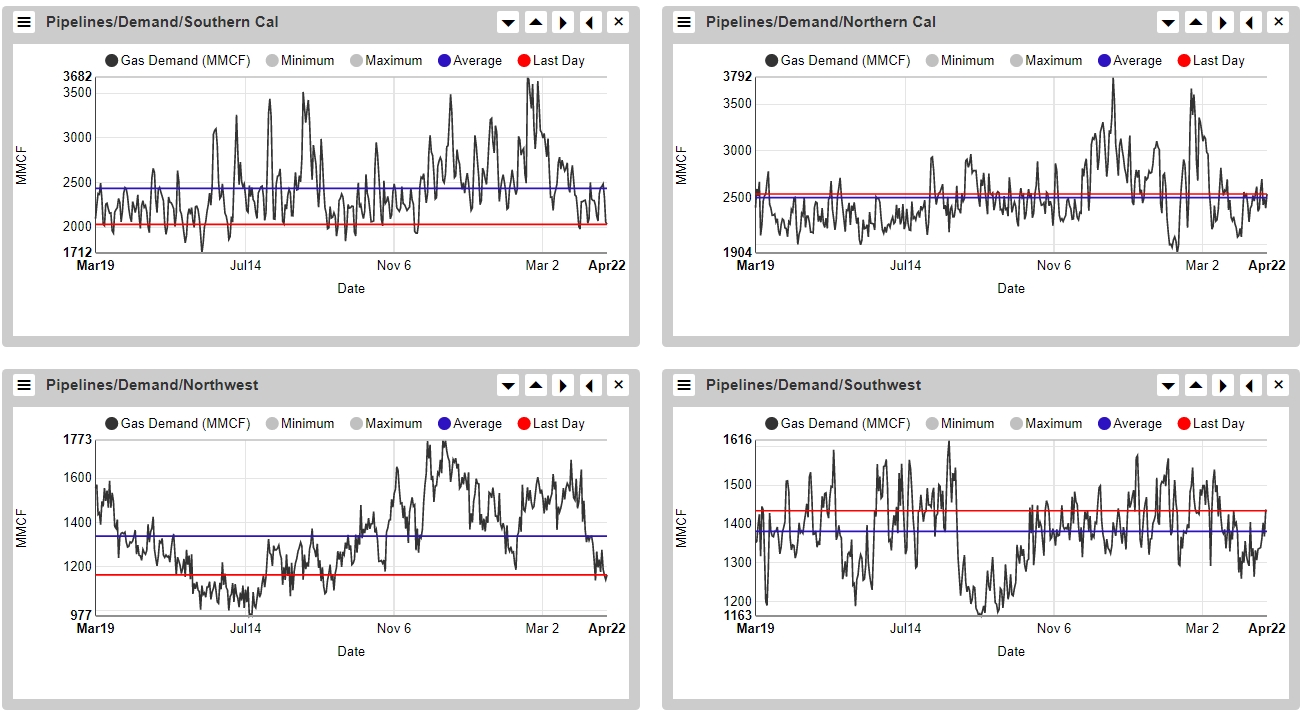 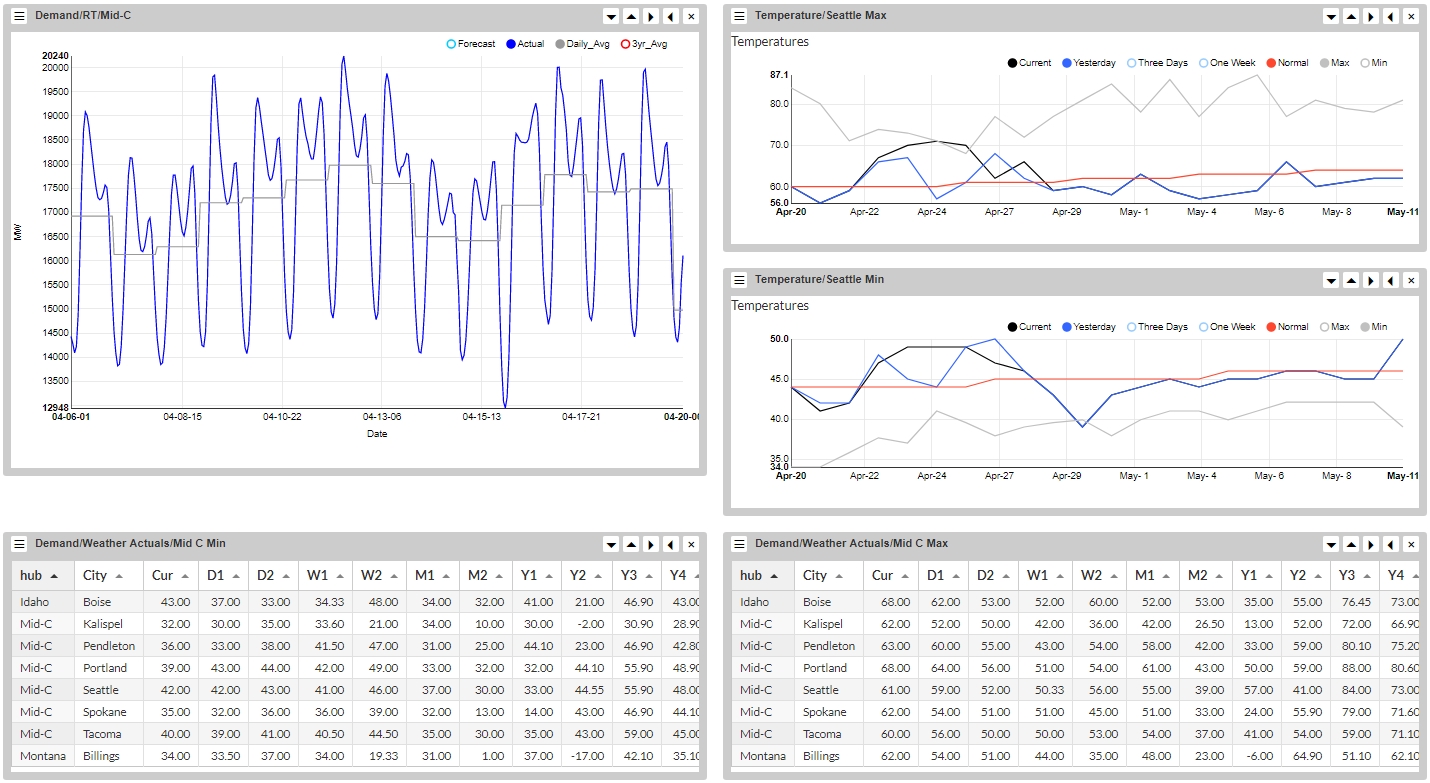 Seattle is showing a large increase in daily highs beginning on the 23rd and extending through the 26th.  Temps on the 25th have been boosted as much as 15 degrees over yesterday’s forecast, leaving the area with a high of 71 and that much closer to neutral degree days. 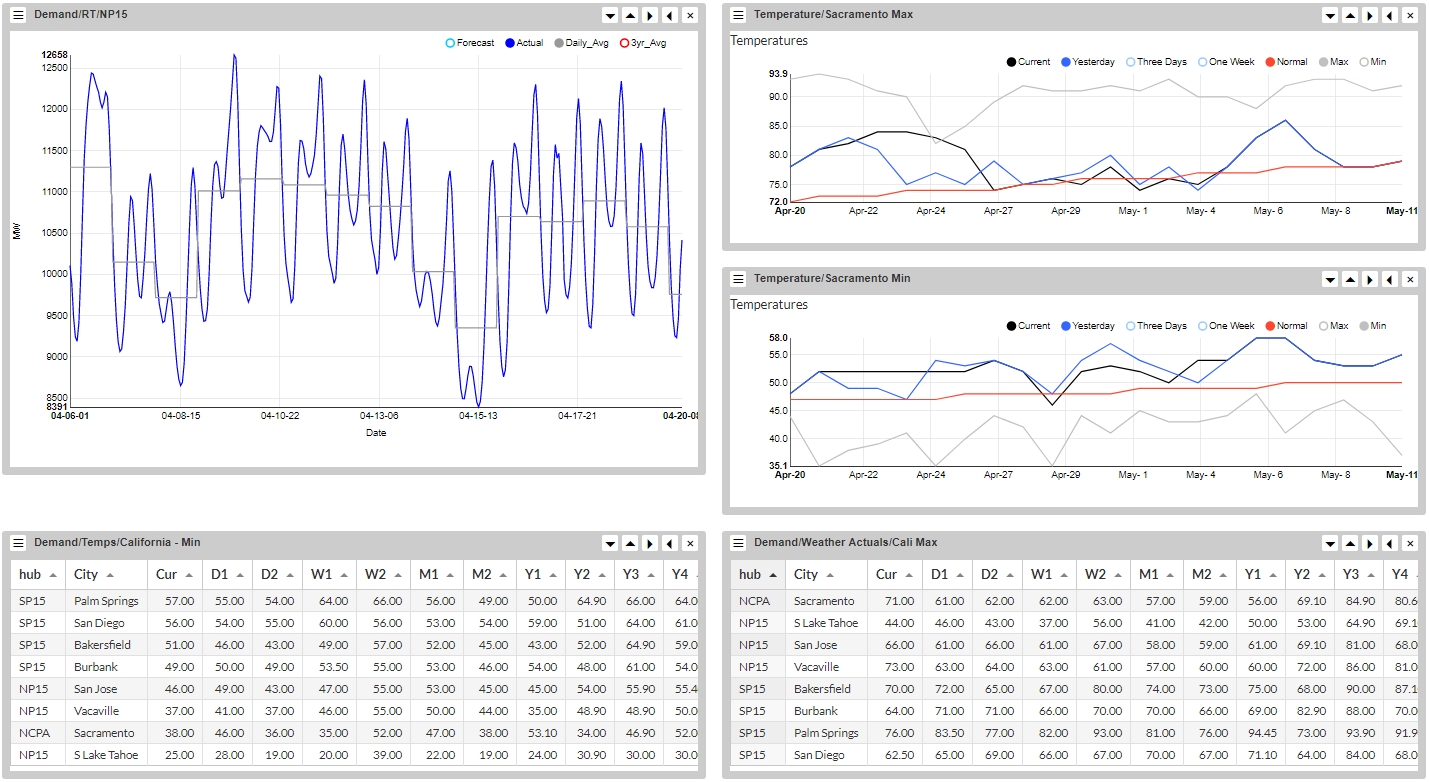 Demand fell 315 MW day-on-day in daily average yesterday, the largest inter-day movement within a weekday in some time.  This was largely due to peak demand falling by nearly the same amount.

Sacramento got a boost to its forecast as well, moving from a projected high of 75 for the 24th to 84 as of today.  Highs should stay well above normal for at least another seven days. 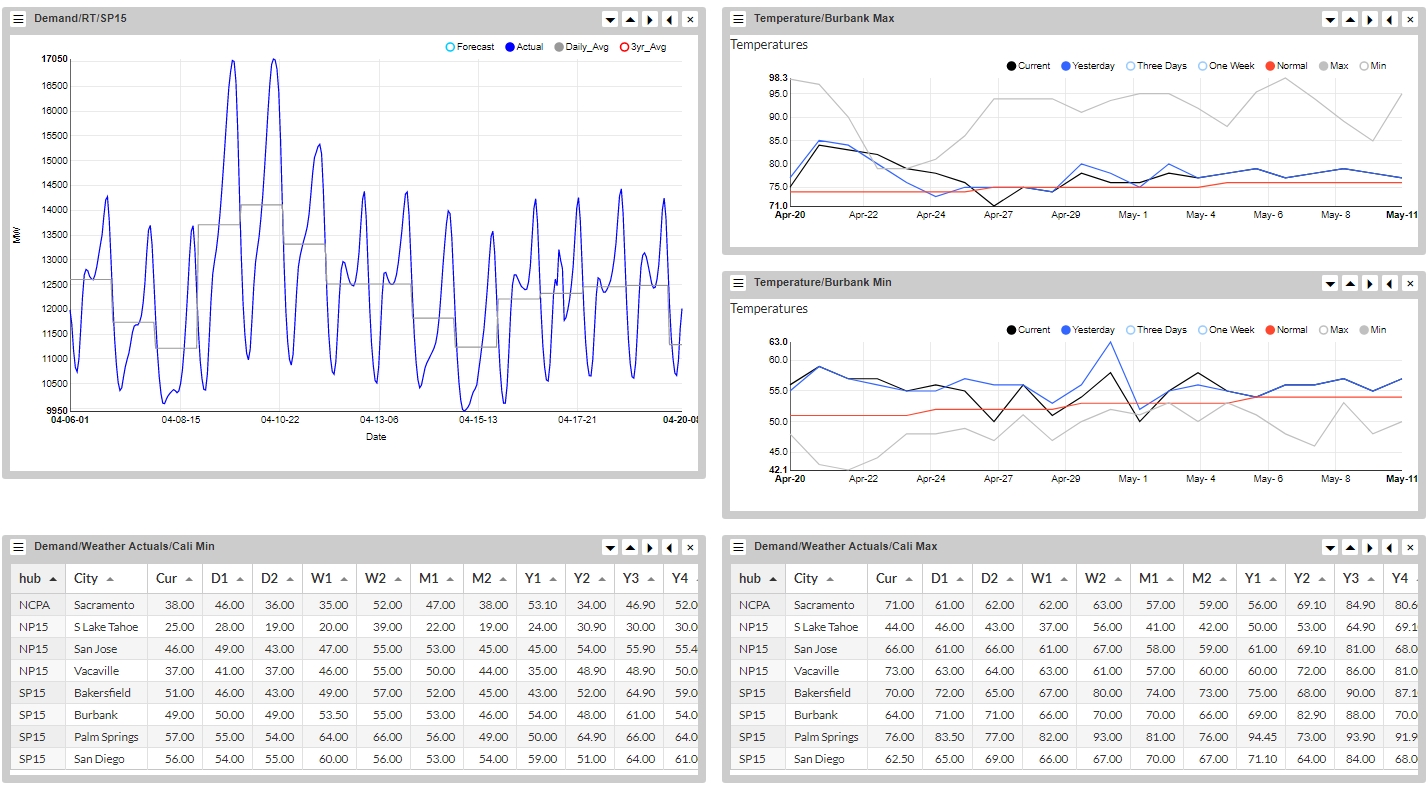 Burbank tacked on three to four degrees from the 23rd through the 26th.  Not as dramatic as cities further north, but enough to push the highs closer to 80. 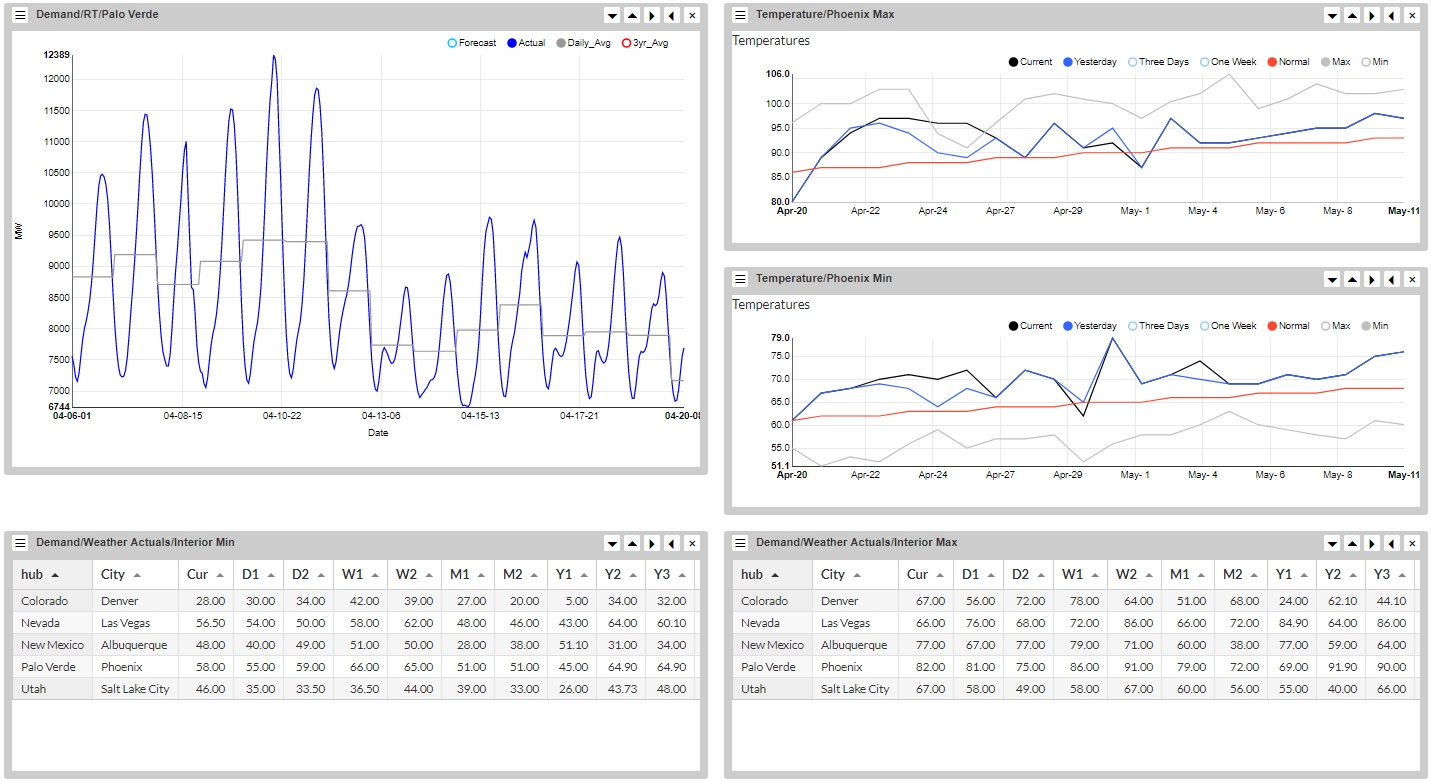 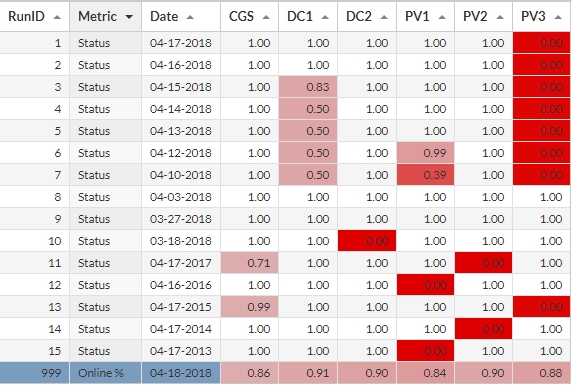 As expected, no changes to the Nuke Status report for today. 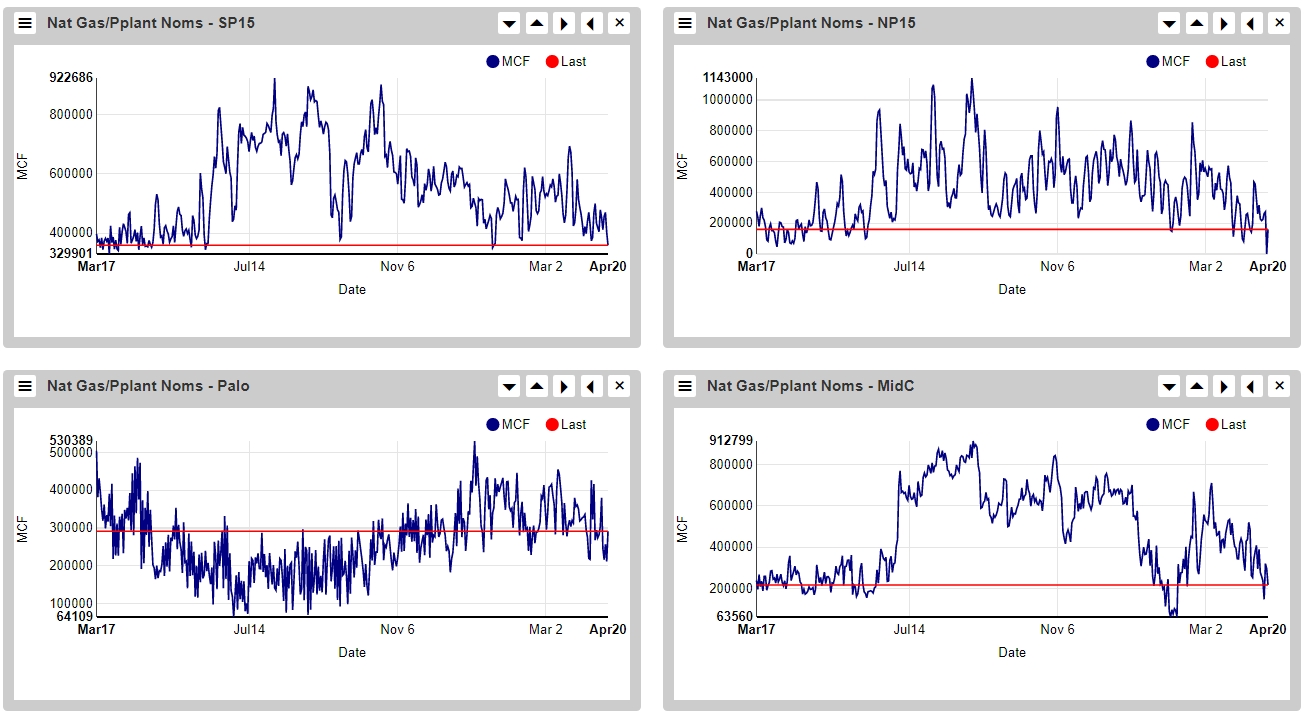 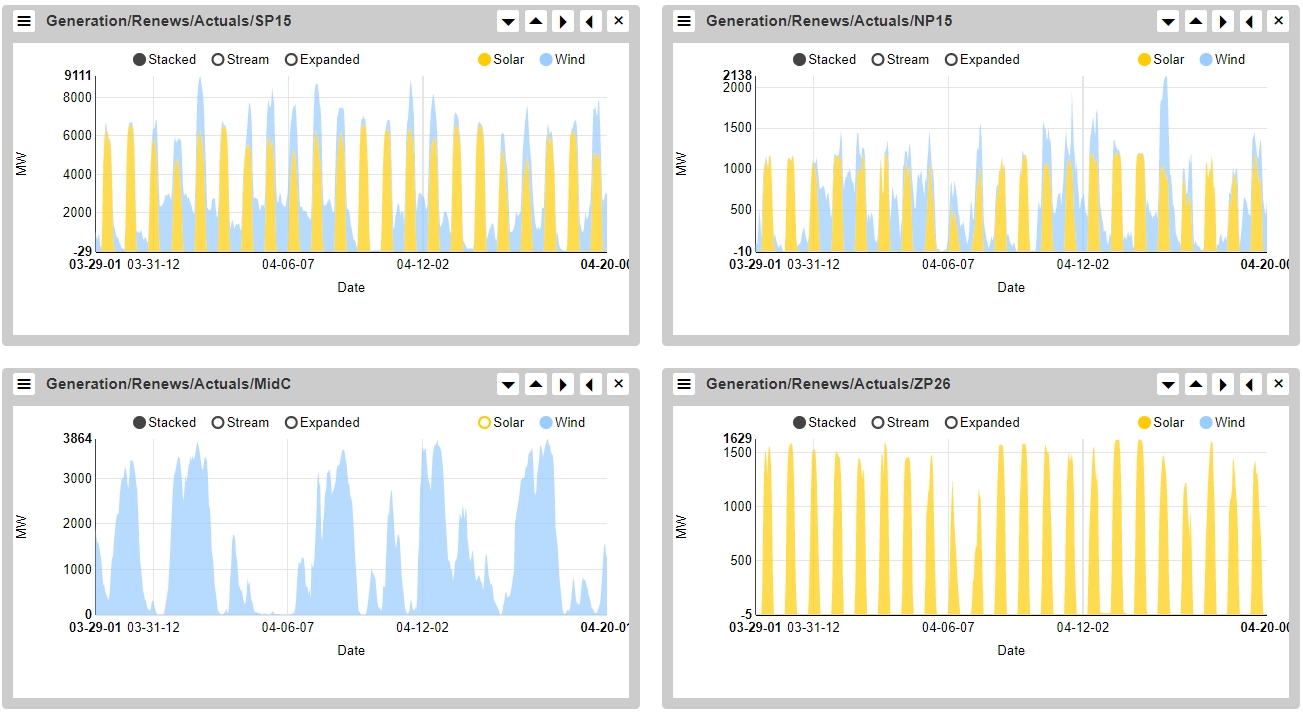 SP solar crashed yesterday, shedding 1,100 MW day-on-day.  Wind made up more than enough however, as the additional 1,700 MW combined with the day’s solar output pushed the day ahead of Wednesday.

Mid-C wind, on the other hand, saw its bottom fall out during most hours, while only managing 1,500 MW at peak. 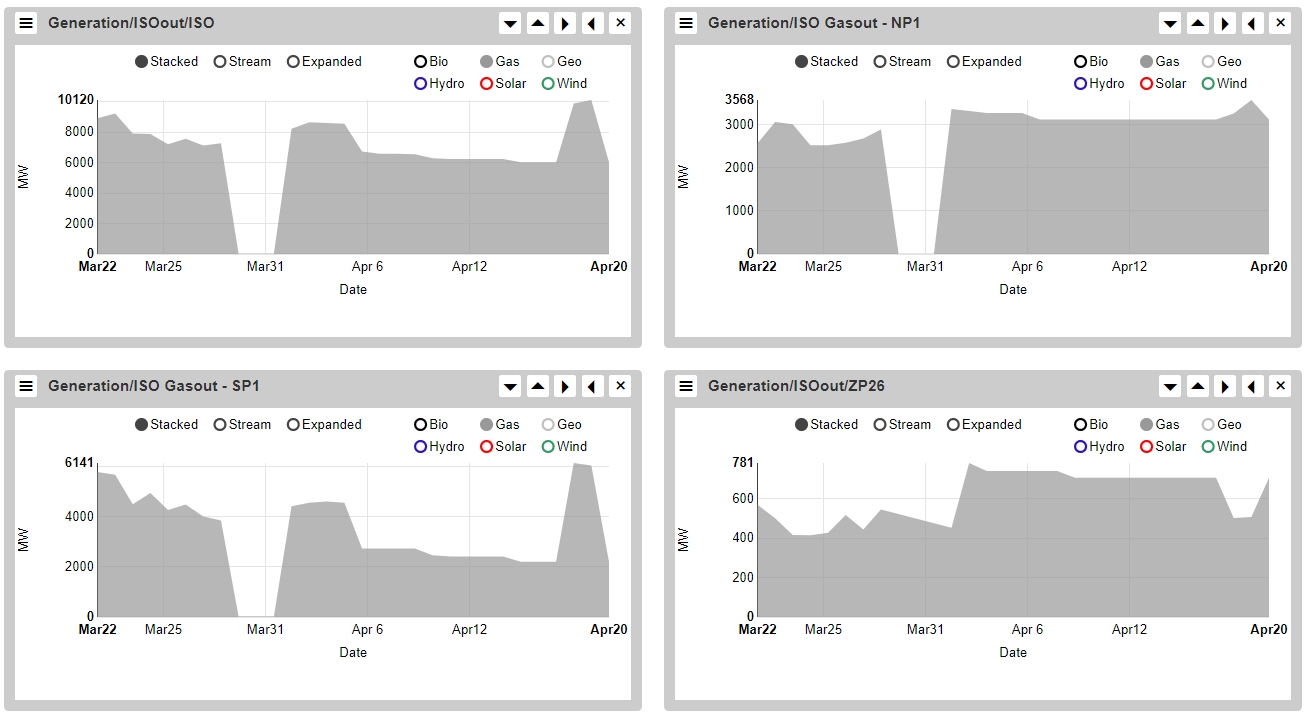 SP finished a dramatic two days today by returning to normal.  This follows a gas outage increase of 3,900 MW beginning on the 18th and extending into the following day.

No notable changes in the NW precip forecast.  Seattle shows up with a couple days of one-tenth of an inch, but otherwise just a few scattered days of trace precip.

NP remains well below normal in its forecast but picked up additional days of precip, particularly moving into the end of next week. 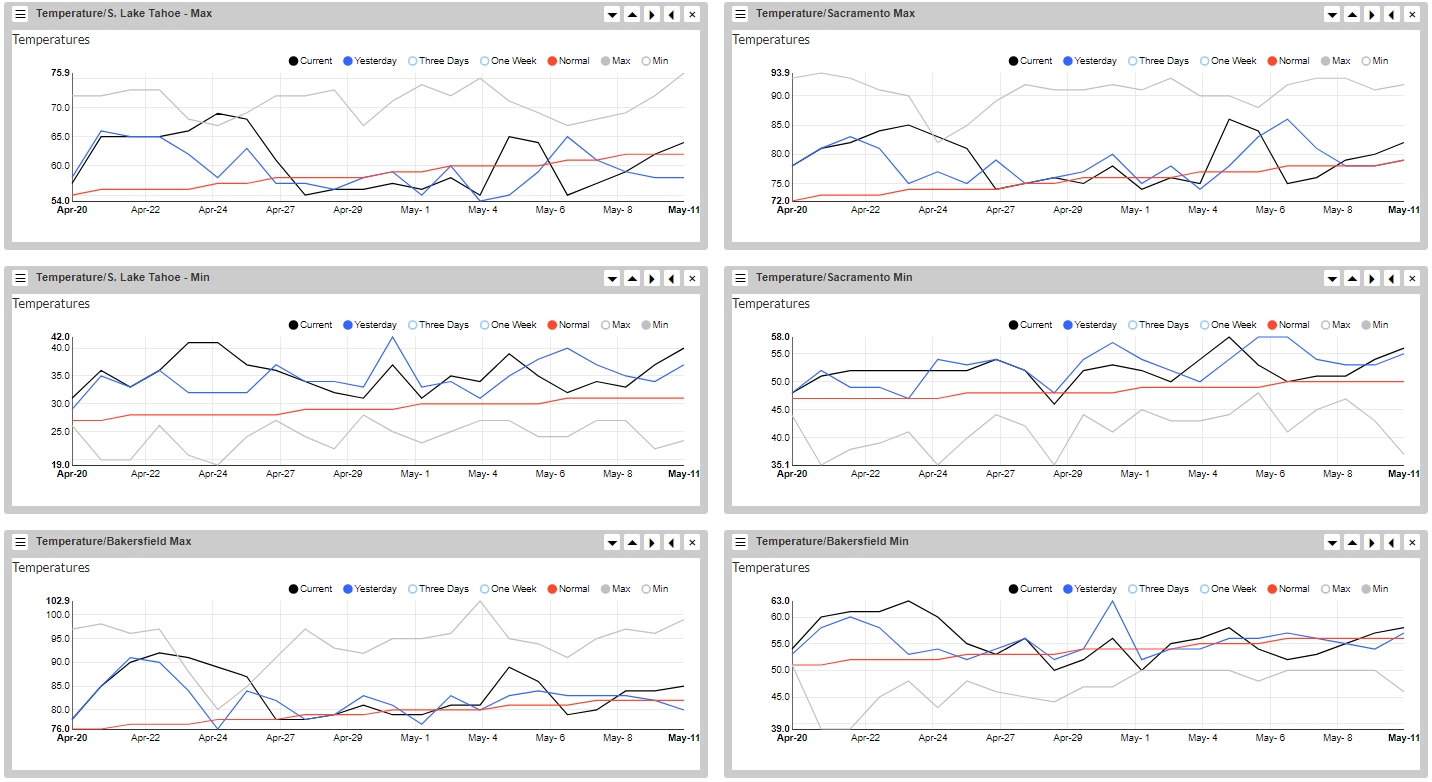 The 23rd-26th shows up as an increase in temps for all stations though especially in daily max temps.  S. Lake Tahoe is now approaching 70 degrees on the 24th. 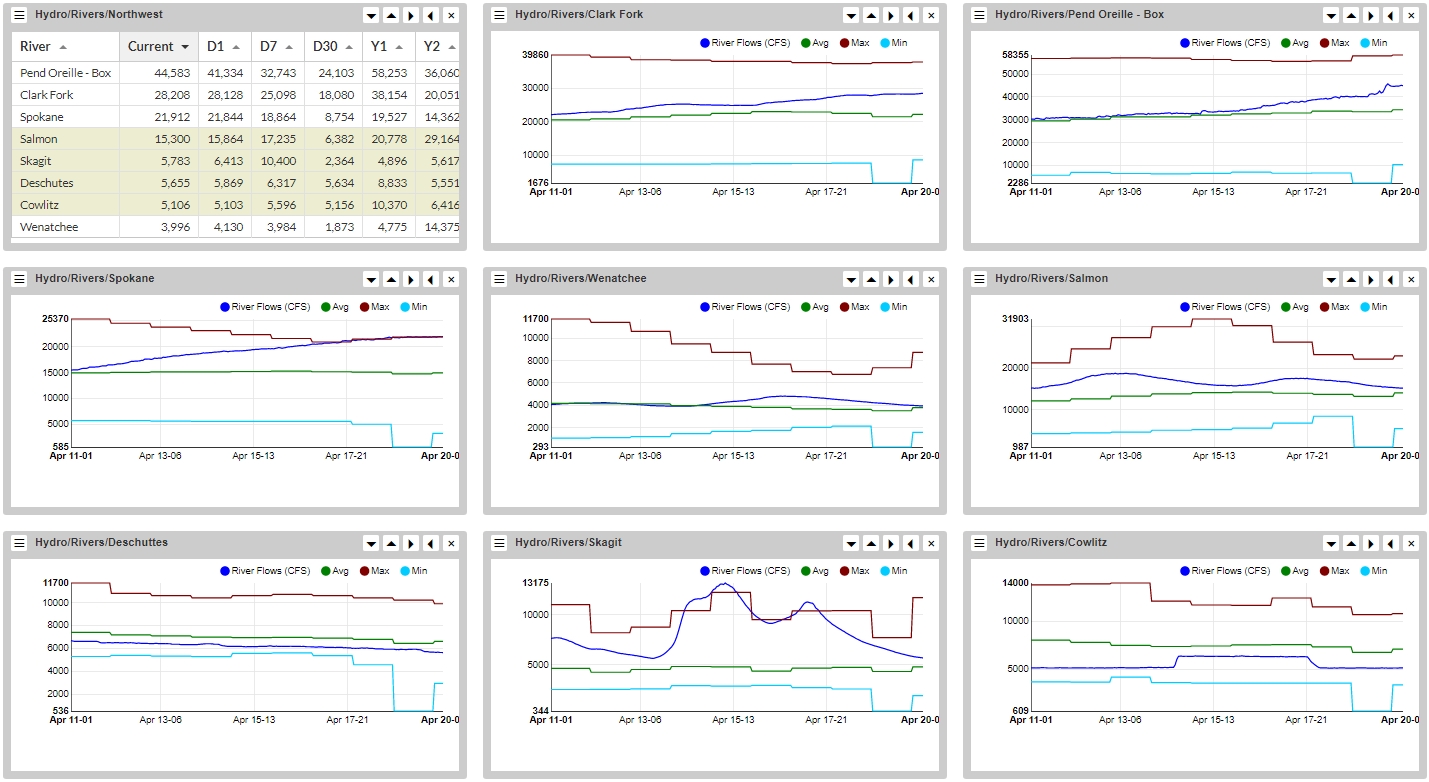 Spokane River continues to set new max flows though the curve is showing signs of a diminishing slope.  Clark Fork and Pend Oreille stand out as two other rivers that continue to build up steam. 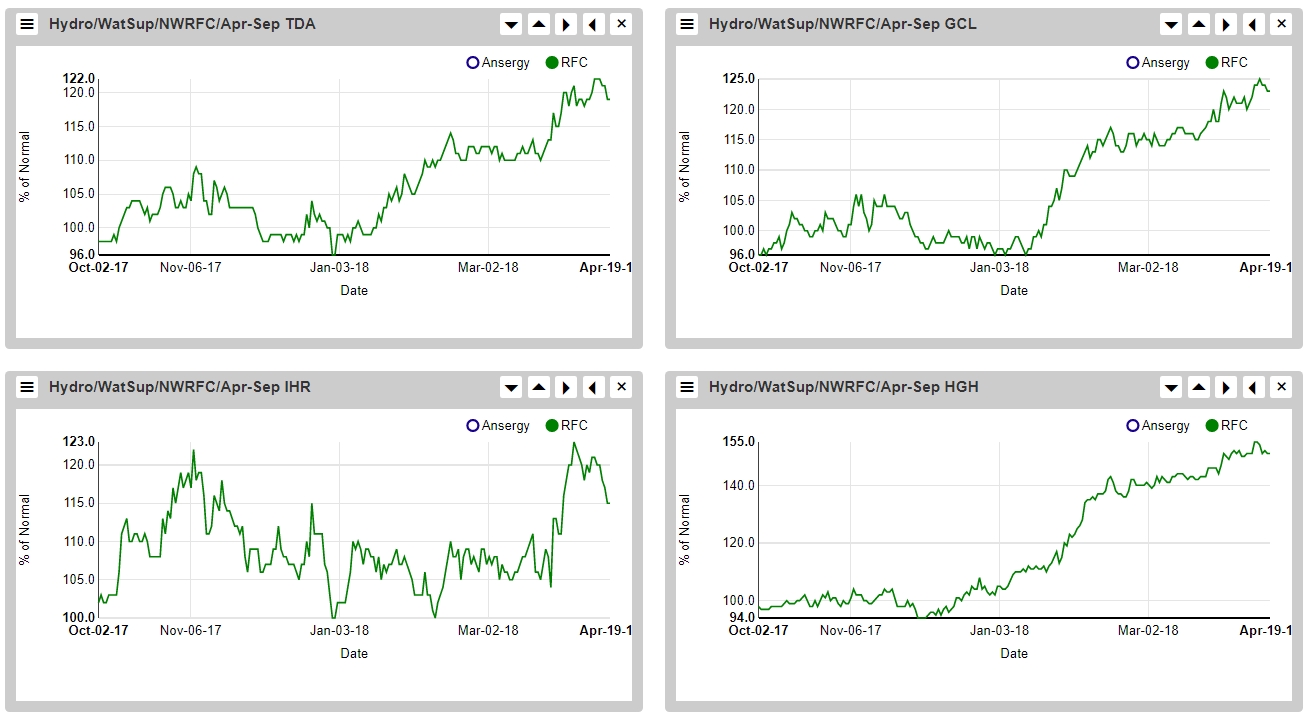 Ice Harbor fell another two percentage points, settling at 115% yesterday.  Grand Coulee is off two points from its high of 125% on the 15th. 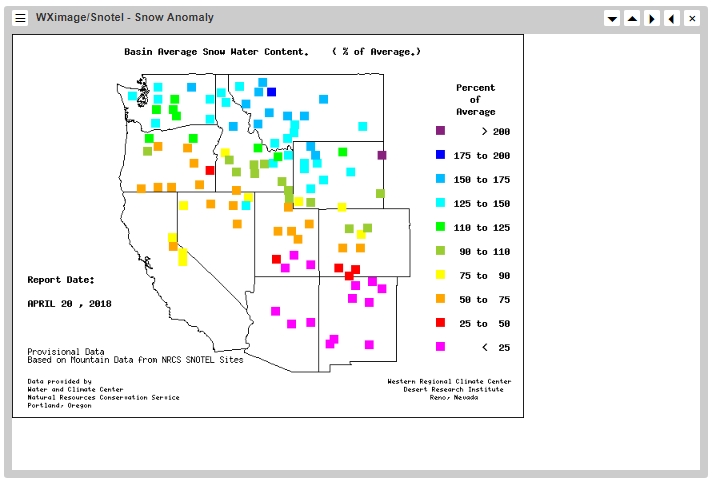 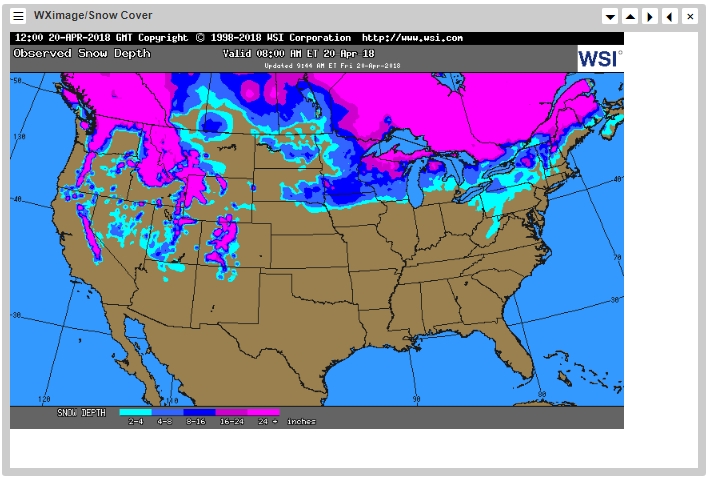 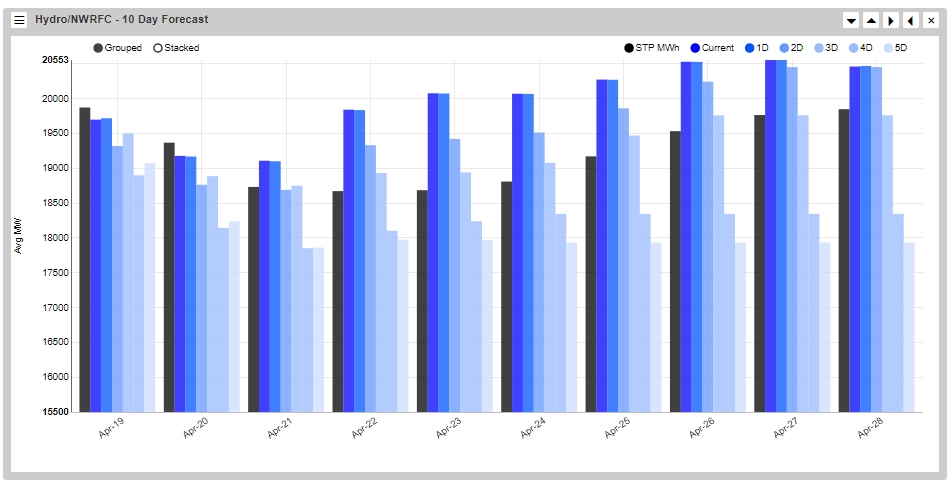 The STP forecast labs behind the NWRFC 10-Day beginning on 22nd and extends through the remainder of the forecast.  Watch for a potential peak on the 28th.

Hydro stagnated a bit after falling heavily earlier in the week. 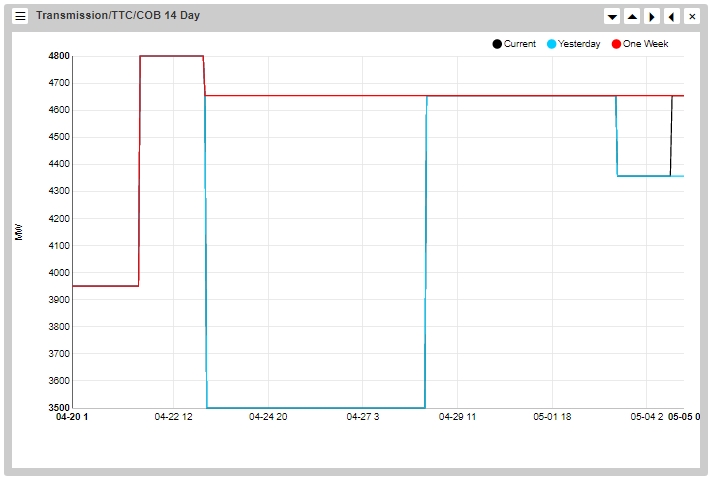 The difference in our forecast in market price makes today an obvious short, but we also produce a range of history in our recommendations for this particular trade. 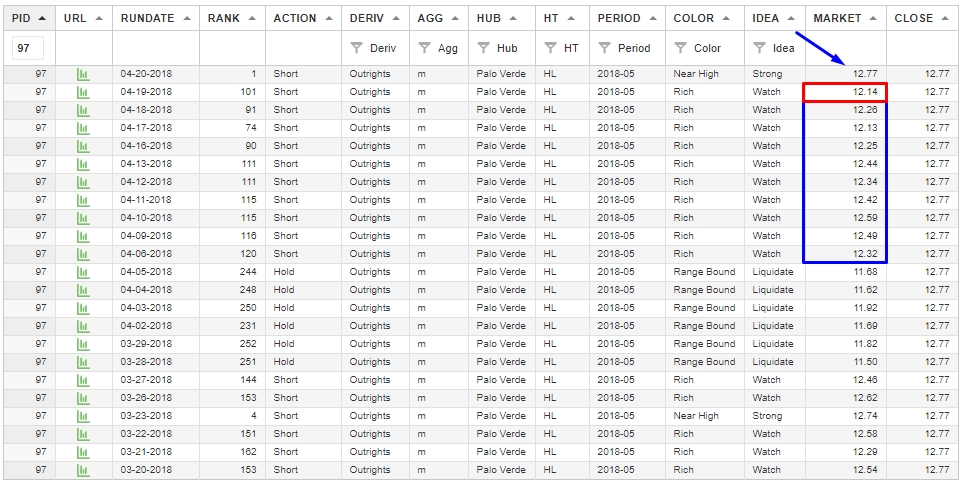 You’d be in the money if you bought at any point within the blue box and sold at the near contract high of today’s price.

Every trade has a PID (product ID) that can be called within the APT History table linked above, the one depicted is PID 97.  Hindsight is 20/20, but this at least gives you an idea of how often the recommendation has been correct.