We saw hints of cash rallies in the southwest, maybe even the ISO. The Northwest is weakening, but not cratering, and will hold gas on the margin for the foreseeable future.

Today we’ll look through a few “Q” trades that caught our eye, then follow up with the Mid-C front. 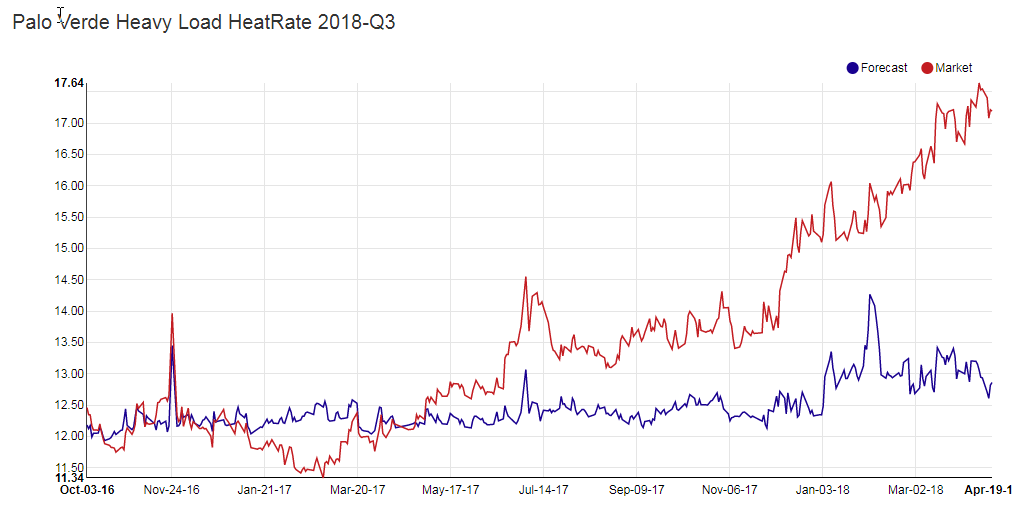 Relentless, the rally in Q3 Palo has kept going and going, but what is most remarkable is that since about October there is no basis for any rally, other than the momentum of the rally itself. Fade at your peril, but we seriously doubt Q3 PV will clear 18k heat rate. 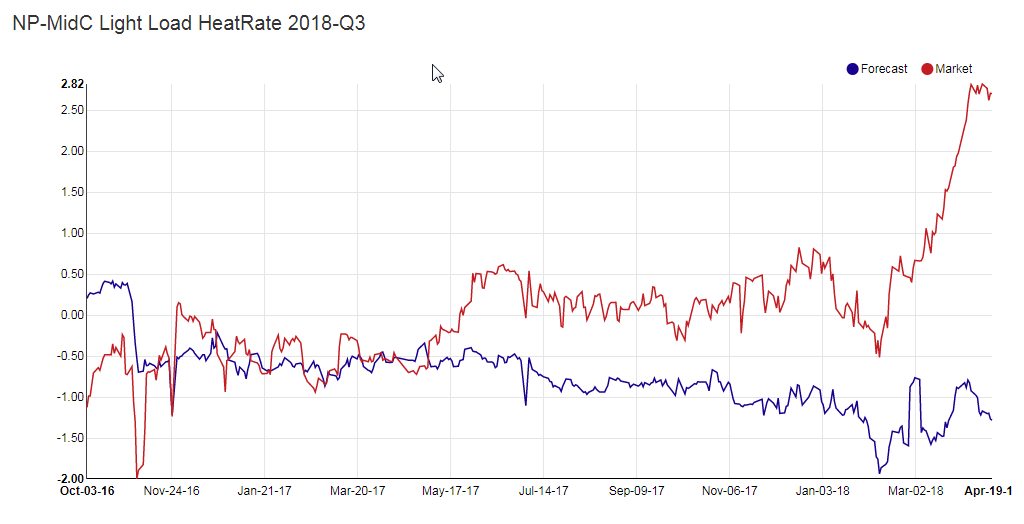 The Q3 NP-MidC LL spread has reached new heights and probably is more reasonably priced than the Q3 PV. That said, let’s discuss the factors that could turn this into a sell. First, early heat in the Northwest would knock the snow off the hills leaving little natural river flows for Q3. That one is a stretch given the current weather patterns and the volume of snow. Second, the ISO implodes off of a mild spring and early summer; bear in mind, the ISO reservoirs are almost full, and the snowpack is decent. Should the ISO DA’s falter, this spread would look rich.  Third, gas market oddities. Imagine PG&E Citygate spread to Sumas blows out; NP will be looking to serve LL via imports. All of these are long shots, but odds are not zero, either. 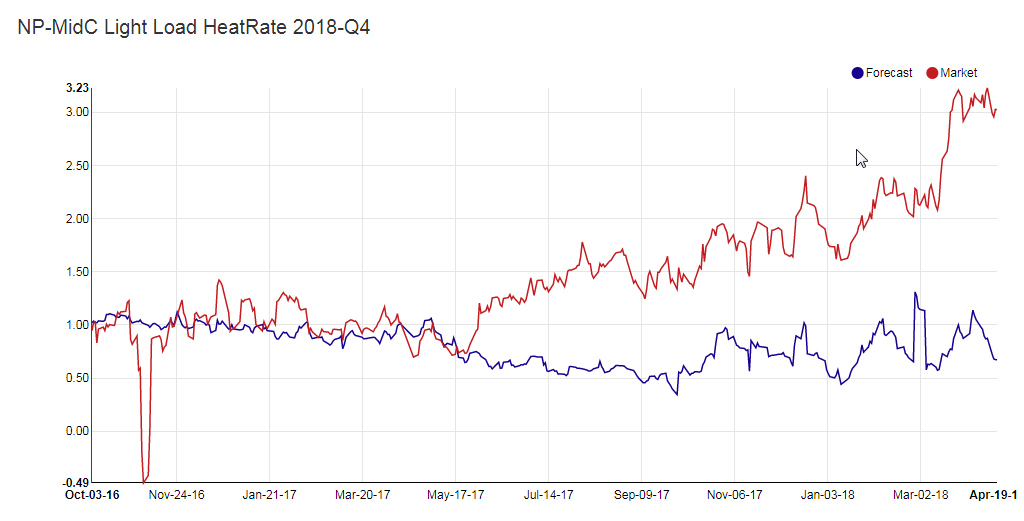 Same spread, just Q4. This one is safer to short given that very little of WY18 will spill into the Q4; all of this rally began in March of this year. Fundamentally, this is over-priced. 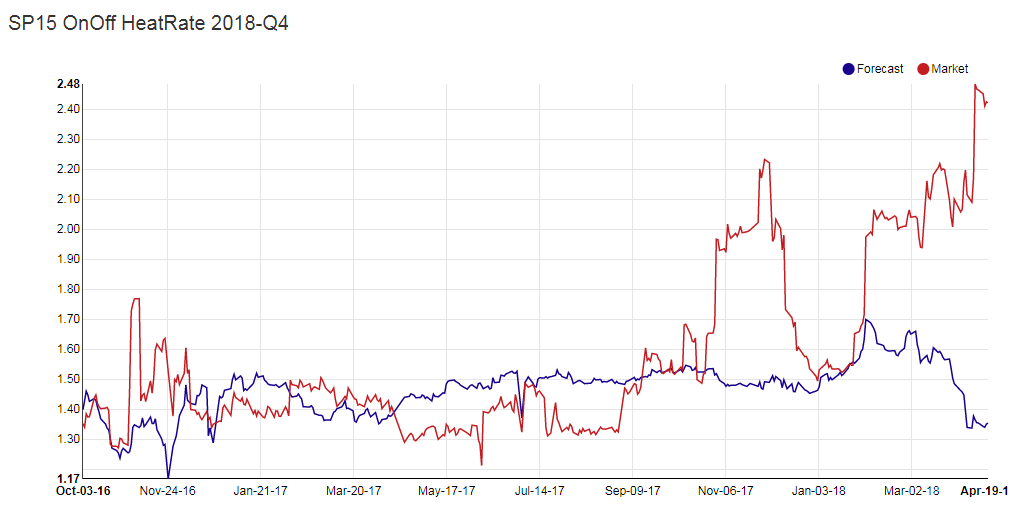 The Q4 SP On|Off is at contract highs and we don’t get why. I guess the assumption is there will be some blow-out summer days, and that will drive term On|Offs up; but what if there aren’t any? For the record, the DC derate impacts the off-peak too. Don’t get this other than a sympathetic rally in all things SP HL. 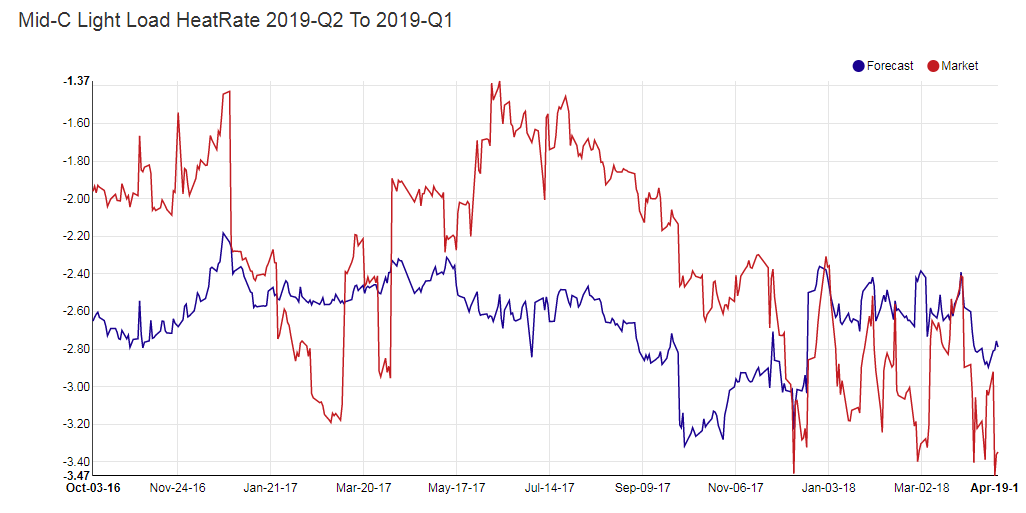 A contract low in the Q2|Q1 MidC LL roll – why? Perhaps the Q2 is pummeled because Q2 18 looks so weak? If that is the reason, fade it since we know nothing about 2019. 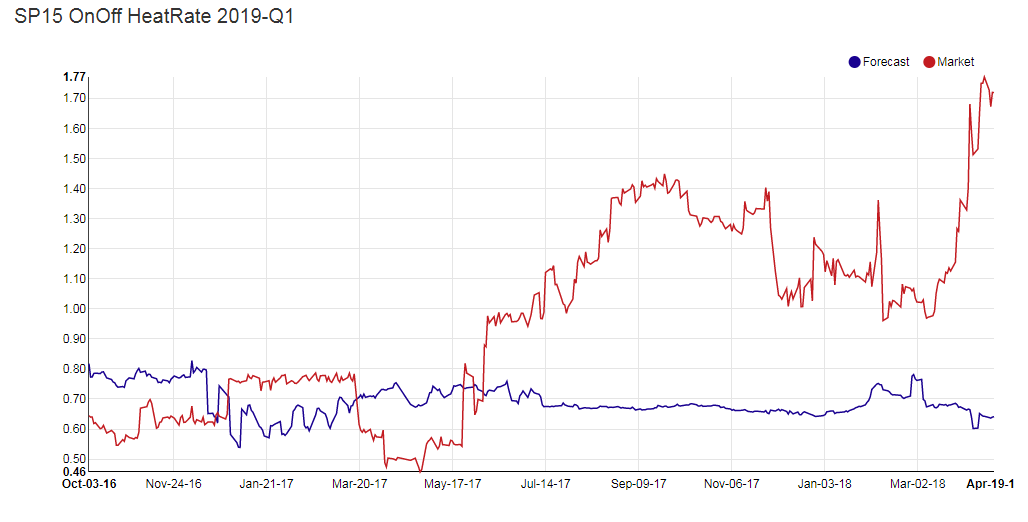 We talked about the Q4; same thoughts apply to the Q1. One difference might be gas issues at Socal Citygate – the Q1 will bear the brunt of those if there is early cold. But last I checked offpeak had gas on the margin too, in many instances more gas is on in off than on (solar factor).

It seems 2019 is bullish too, but the traders might be getting ahead of themselves. If 2018 is a bust, and that remains to be seen, this ridiculous roll will get pounded. So shorting here is a hedge of sorts against weak 2018. 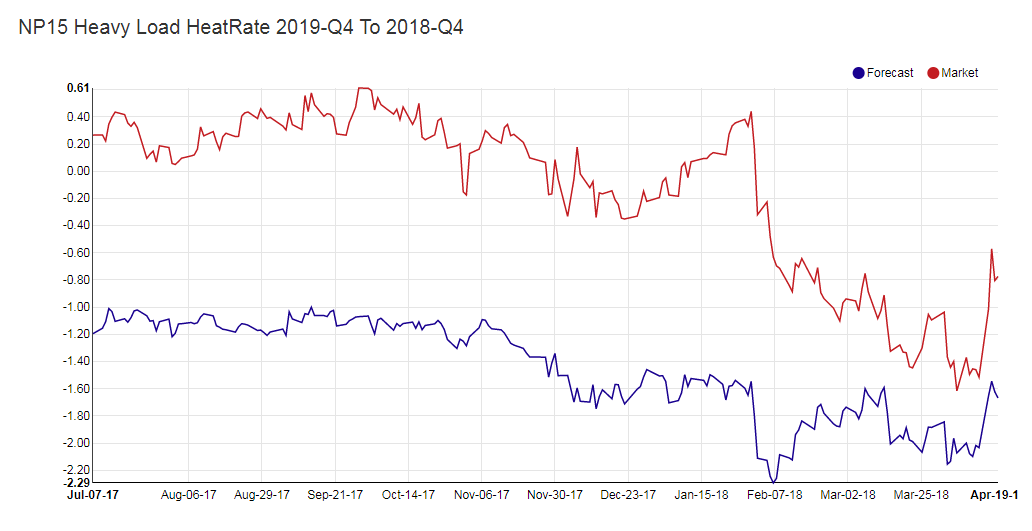 A year-on-year roll that all of a sudden is reversing a six-month bear run; now its priced equitably.

We talked about MidC, a lot, and concluded that this would be a massive water year, but it just hasn’t started. Let’s see how the market is pricing it.

Huge selloff, probably driven by the significant rally at Coulee – up 40kcfs week on week. Still, the weather is dry and not hot; only the Spokane and Pend Oreille are sharply rallying. We see BPA keeping gas on the margin through the end of the month so buying at these levels is like owning a free daily call. 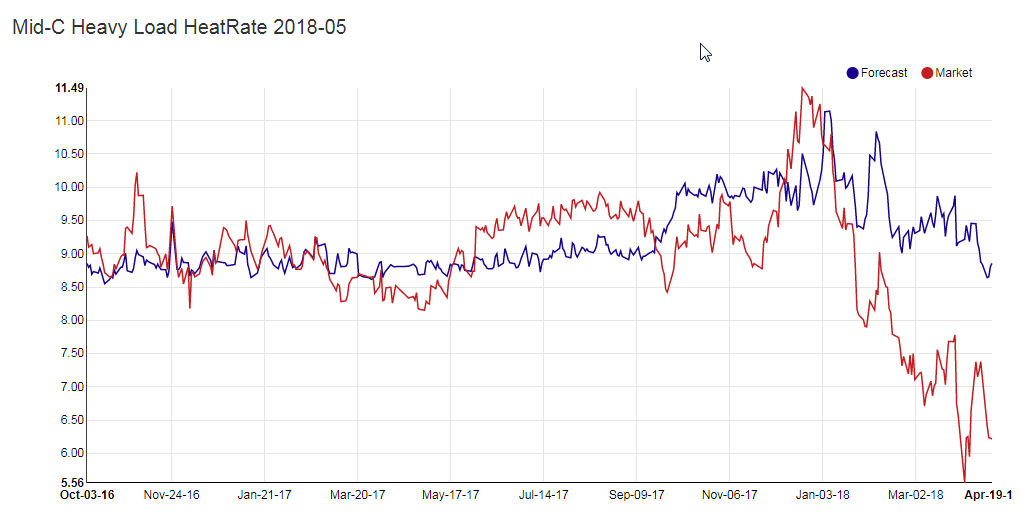 May got torched in sympathy with the April sell-off. At these levels, I’d be inclined to go long again and hope the weather cools back down. Runoff could still be four weeks out.

June got battered, like April and May, but it should have. The big question is will BPA even try to keep gas on the margin in June? If she doesn’t, then you could see a lot of single digit days, maybe some negative days, maybe in HL. 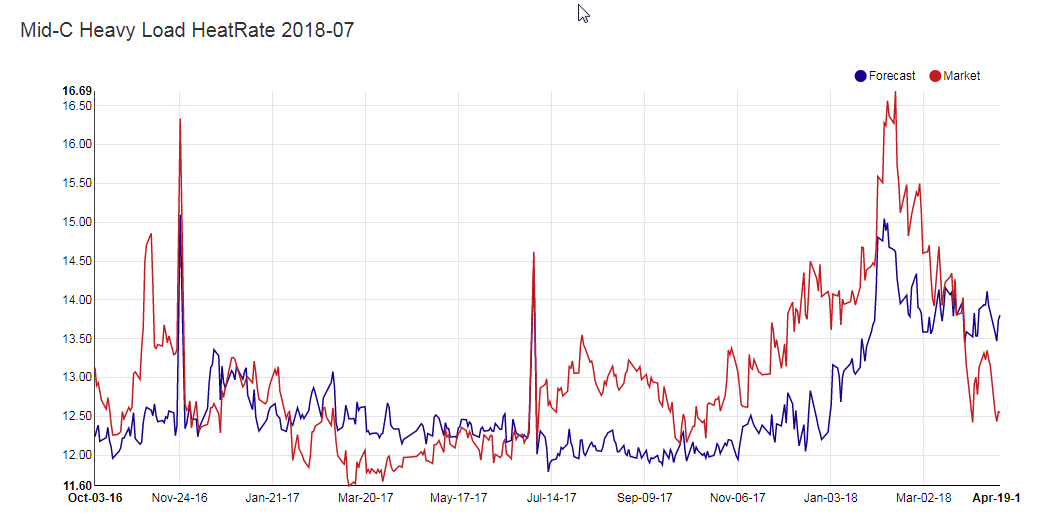 July got sold, like the rest of the strip, and it too should have. I’d still be short here, after all, the heat rate is 12.5k, and this easily could clear at 8k. 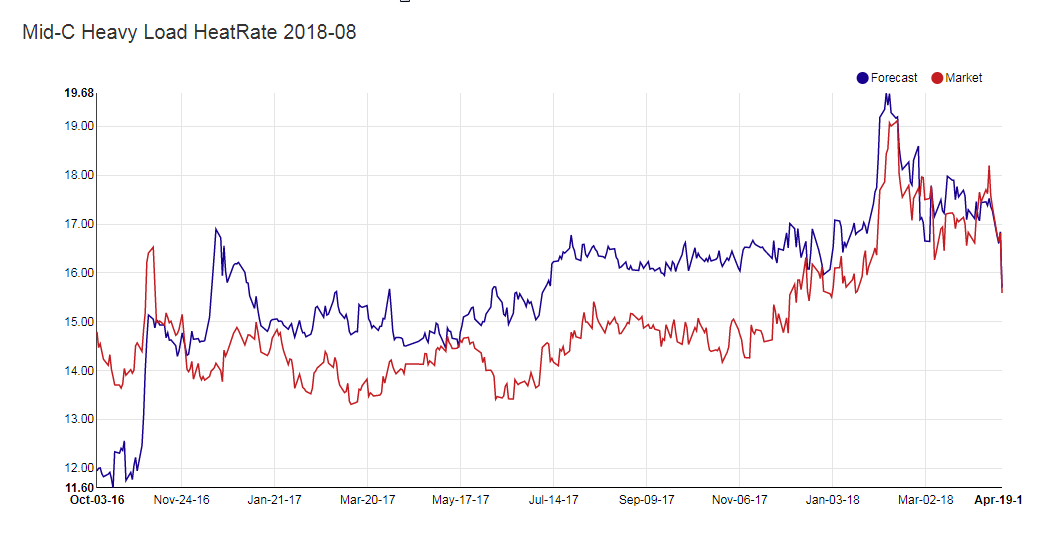 Even August is starting to feel the selling pressure; we think there is more in store and would remain short.