I was struck by the sudden change in Northwest weather over the weekend; where the trend has been cold and dry, now, of a sudden, it’s hotter than hades: 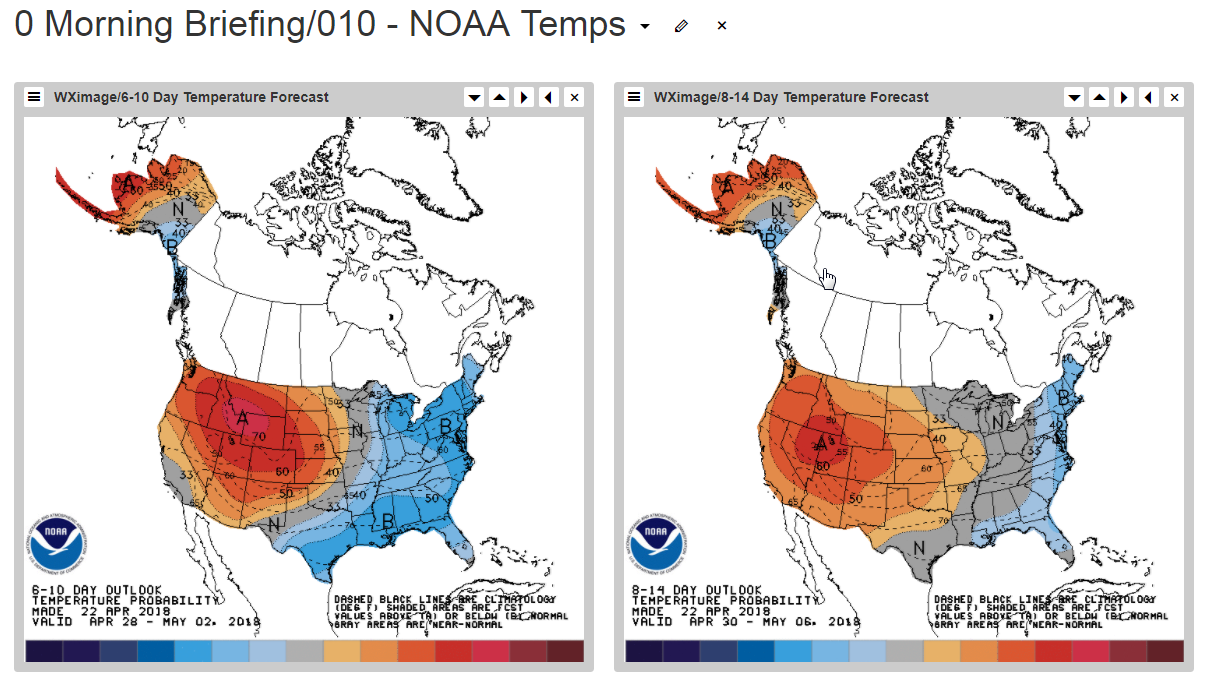 If you were scripting the worst case scenario for May Midc Length, you would have painted the above. Let’s look behind the curtain:

The event (warm) is relatively short-lived, at least in the forecast as of this moment, but there are two days where Kalispell is above 70 and nearly a week straight where the lows are above freezing. This is the kind of event that will trigger the freshet, and without a return to very cold, it won’t stop until the last snowflake has transformed itself into a water molecule.

Spokane is even more dramatic:

Four days above 70, one day almost at 80, and eight evenings above 40 degrees. This is the forecast that we fear more than the Kalispell because there is so much snow in the Spokane and Pend Oreille and Clark Fork Basins. Those basins are especially important since there is no storage (aside from Lake Pend Oreille) to capture the melt.

As a reminder, look at the current anomalies:

That is a lot of snow, and these warm days will start the melt. Let’s look at current flows to gain a feel for how much incremental water we should expect in the next two weeks: 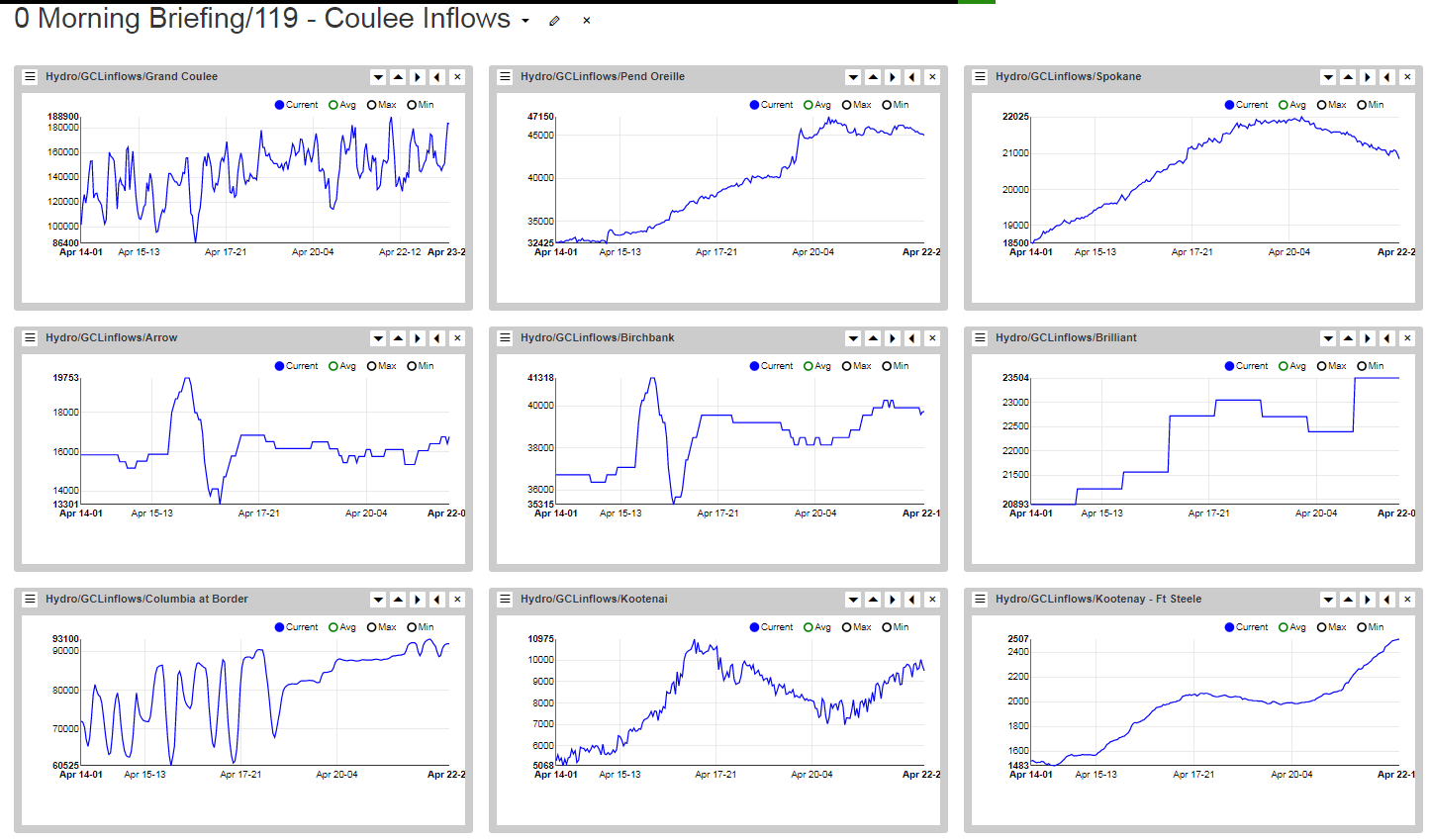 This is a collection of rivers above Coulee, and the ones we are most interested in are the Pend Oreille and Spokane and Brilliant.  Coulee is already averaging 160 kcfs, but some of that is the draft, maybe 20k cfs is draft. The Pend Oreille can gap up to 100 kcfs at peak, the Spokane can approach 40 kcfs, and discharge from Brilliant can hit 90kcfs. Contrast those levels with current: 45kcfs, 20kcfs, and 23kcfs. Peak could be about 240 kcfs, and that doesn’t even include Arrow discharge, versus a current level of 88 kcfs.  Point being, there is a ticking time bomb sitting up in those hills, and the NWS just lit the fuse.

This initial heat wave won’t put any of the rivers at peak, but we wouldn’t be surprised to see all three of those stations see 50% increases within ten days, which is about when the draft ends. Our thoughts on trading around this news will follow later today in a subsequent post.

We’re ignoring those Palo HA marks, $20,000/mwh seems a touch high. No material congestion in the DA, but we think that changes as the Northwest heats up and water starts flowing. 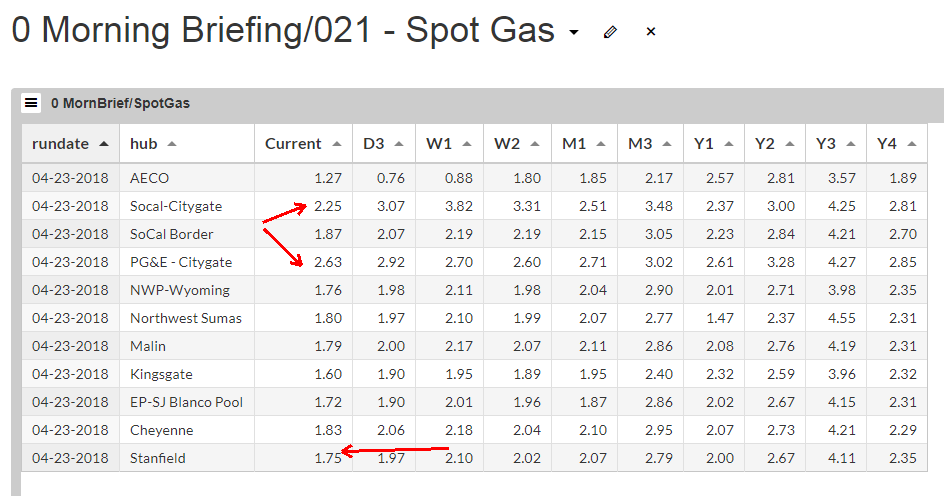 Socal Citygate was beaten back to reality, finally. Let’s see how long that lasts; the Term Markets suggest not too long: 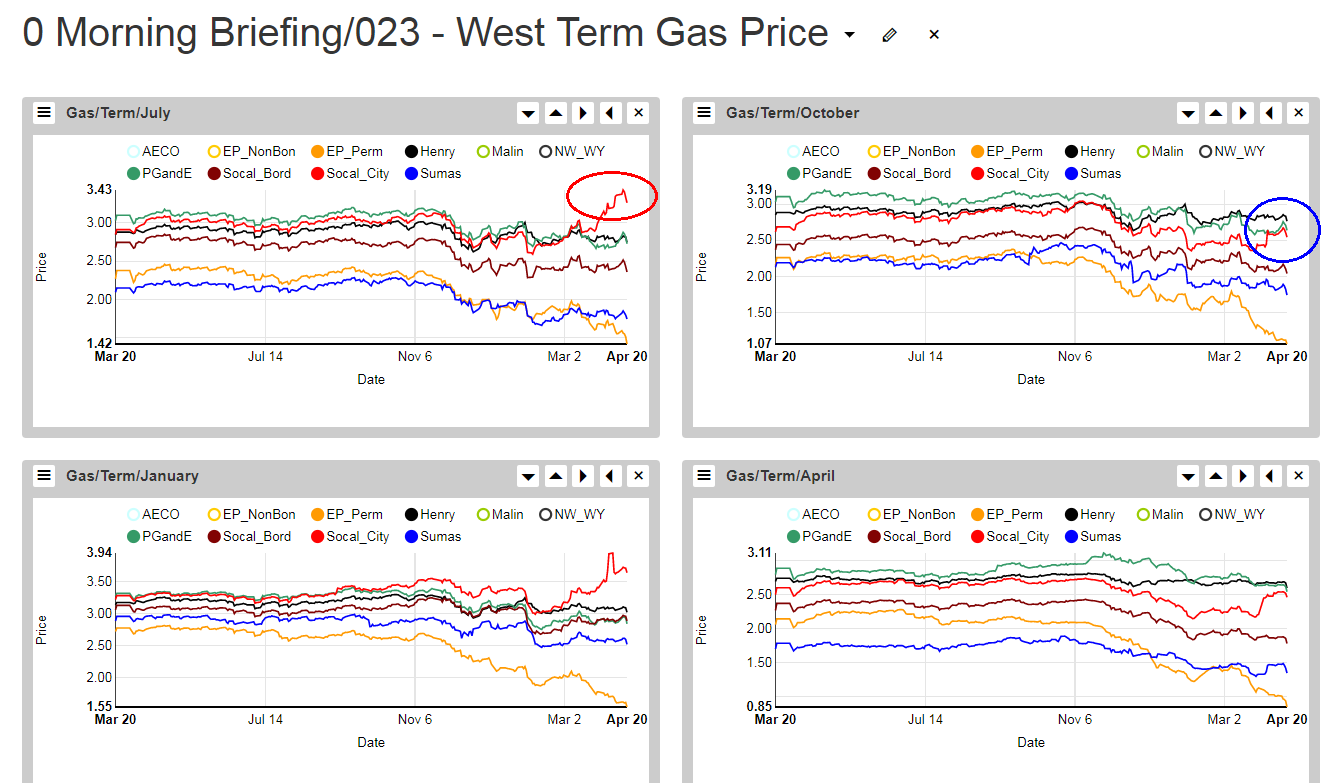 I don’t get the July premium at SCG, versus PGC, makes no sense to me, not given that there is no premium in October, yet a massive bubble in July. I guess the market fears massive turbine-driven demand in July, but even that is a false assumption:

Power demand can approach one bcf/day, maybe a bit higher, but those levels are dwarfed by winter demand:

Another exciting change is the meltdown at Permian, that gas is nearly too cheap to meter. 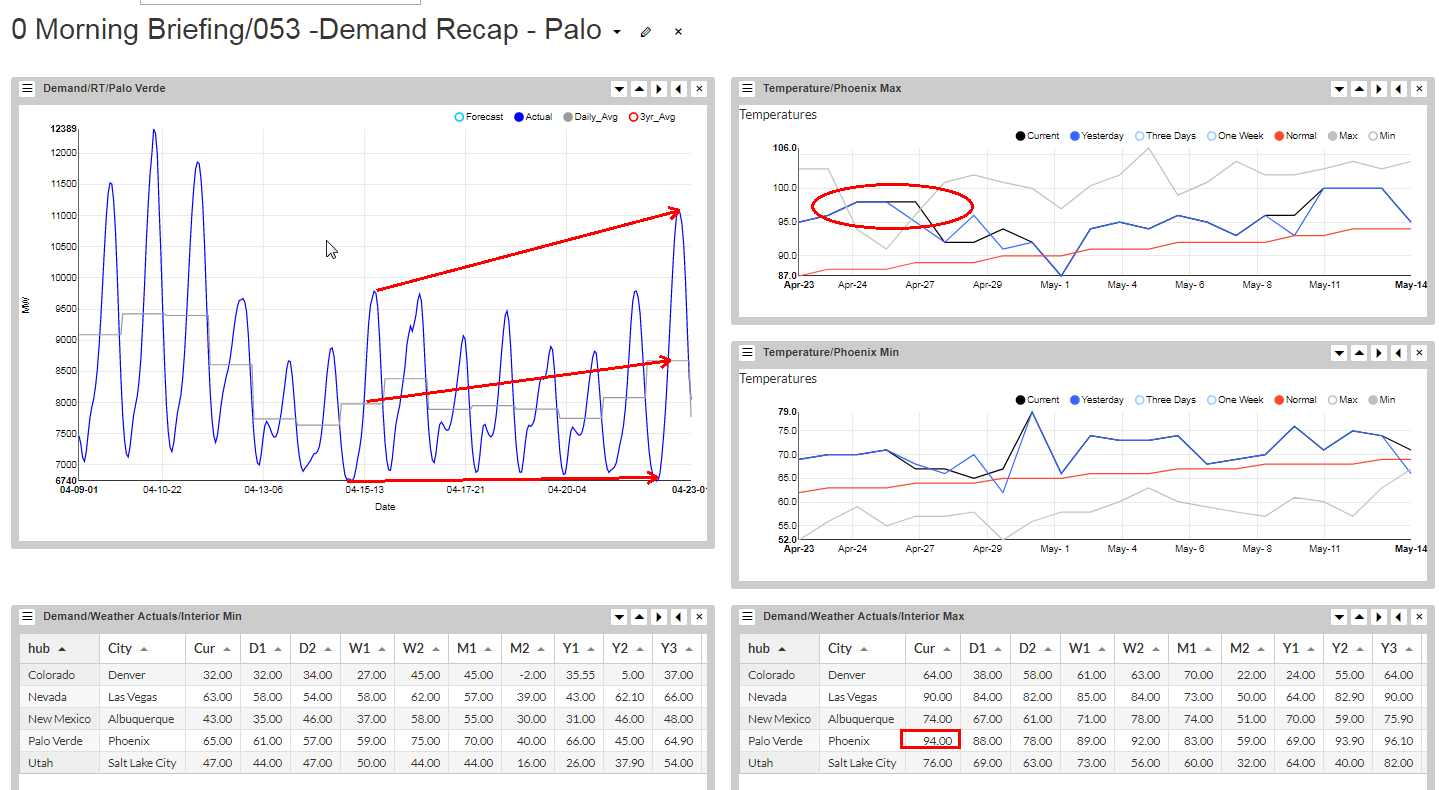 Palo is off to the races, loads gapped up on Sunday and will continue to climb going into a hot week with temperatures approaching 100 degrees. 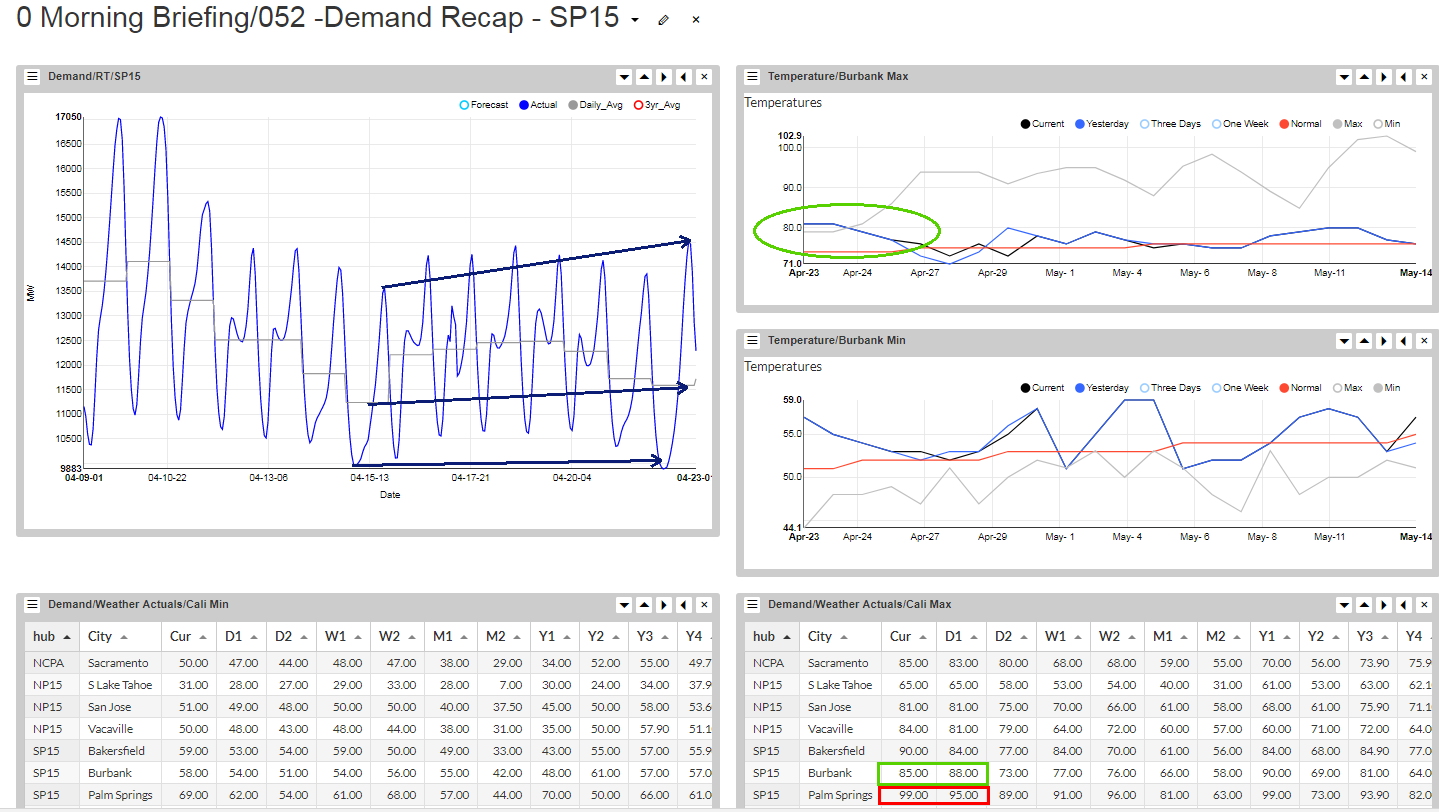 It isn’t hot in LA, though Palm Springs is baking. SP may see a small rally, but the coastal load centers are more mild than hot. 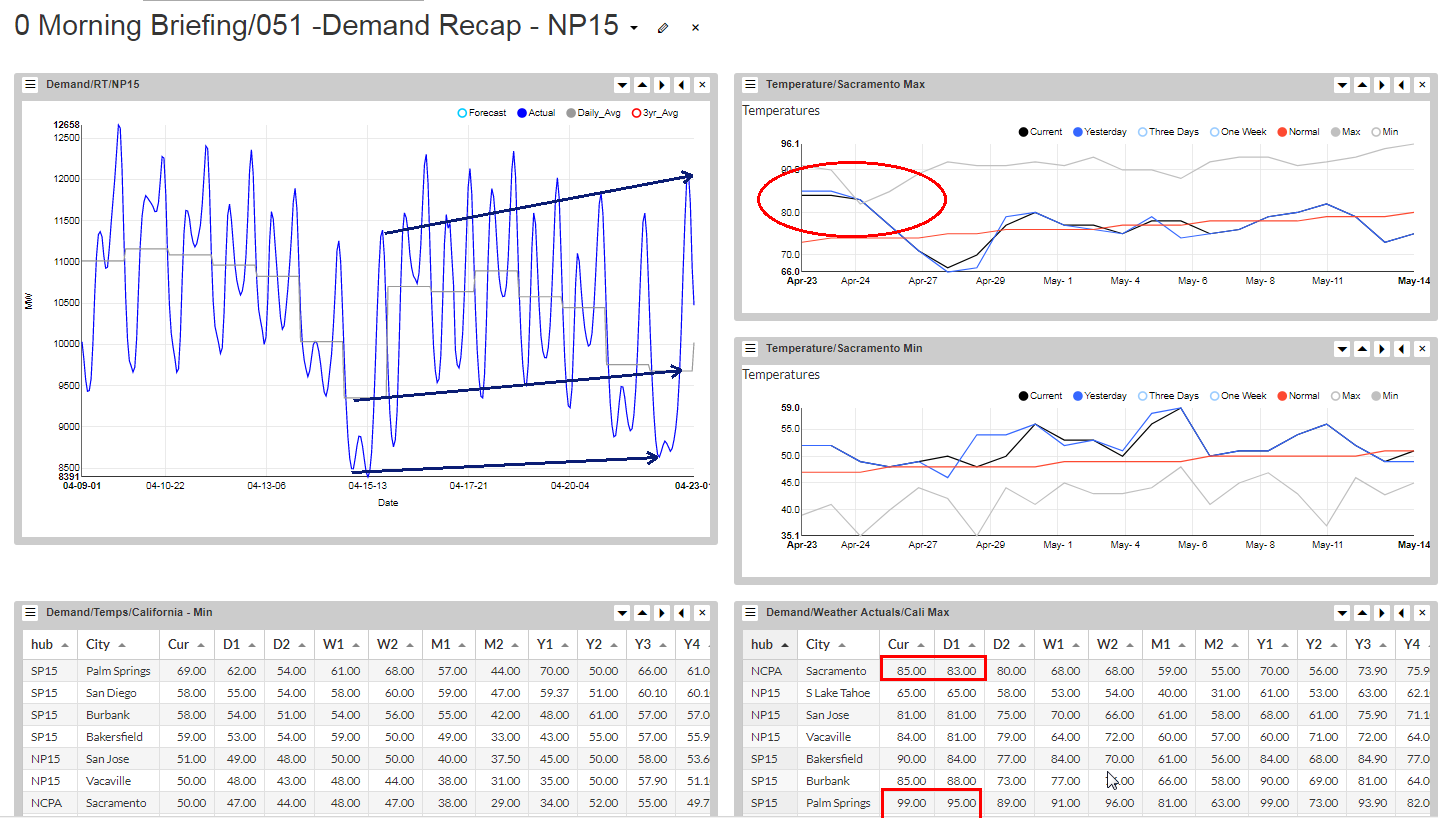 NP’s loads rallied, week-on-week, and temperatures will be reasonably warm, but not break-out heat. If anything, the ISO will be neutral, maybe slightly bullish off of interior heat. 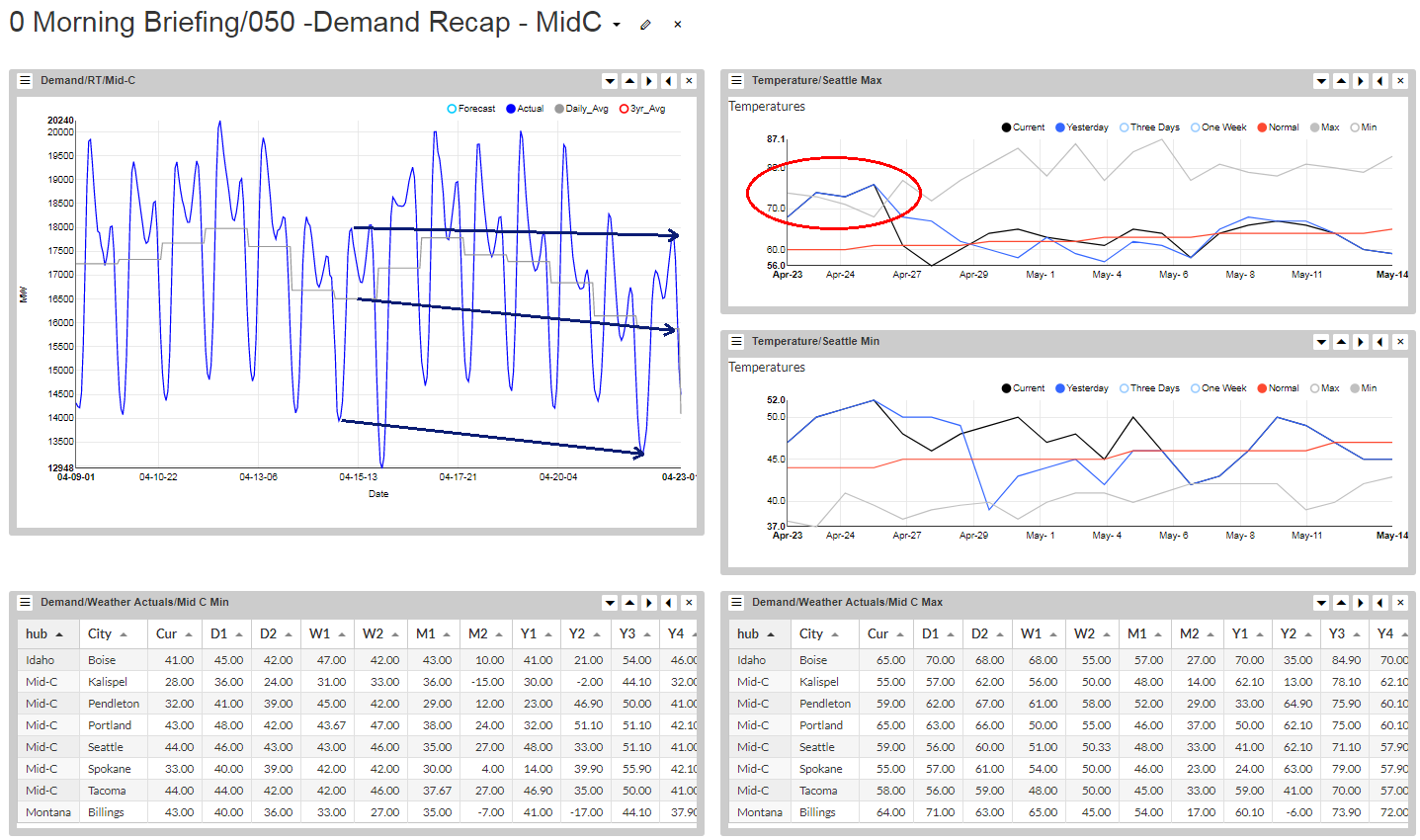 The Northwest saw its load retreat and will see more of the same as the weather warms up. Perhaps there may be some AC load, but the loss of heating load will more than offset that. 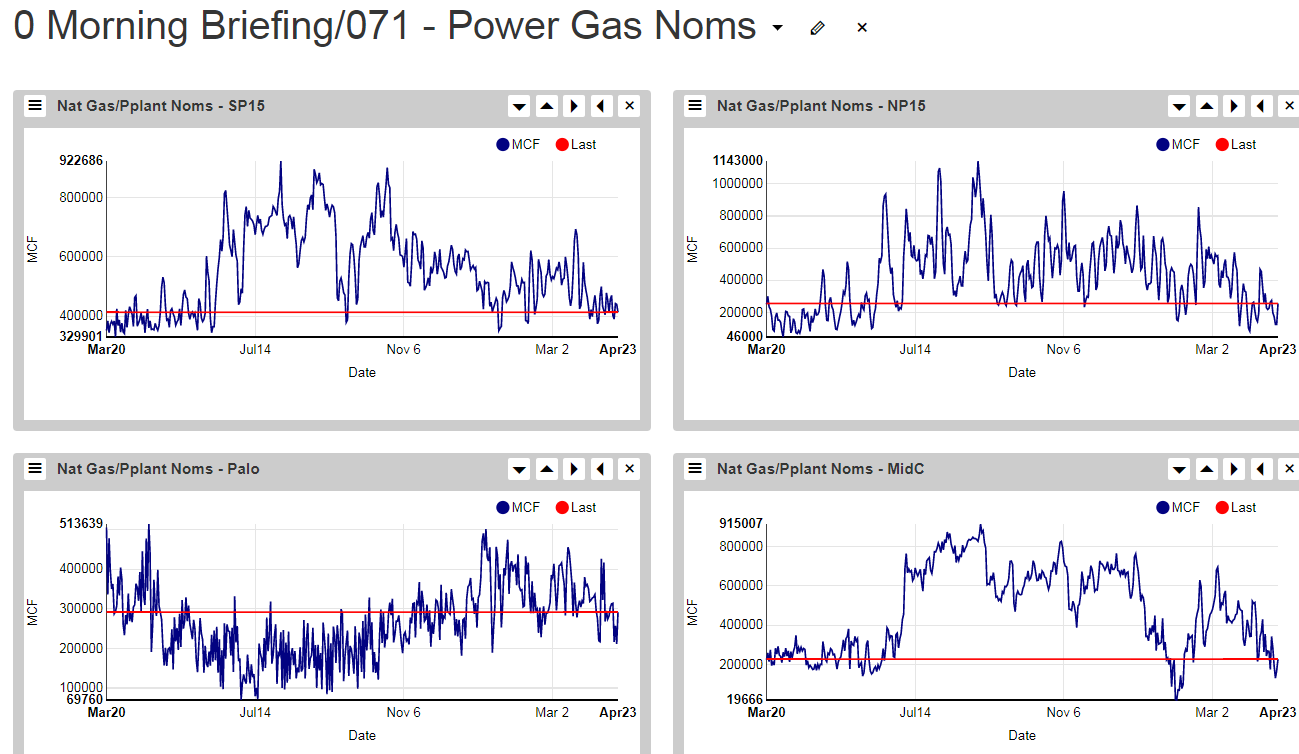 Weak everywhere but the Southwest.

Today is Monday, the NWRFC will release a new STP this afternoon, and we are expecting significant changes. 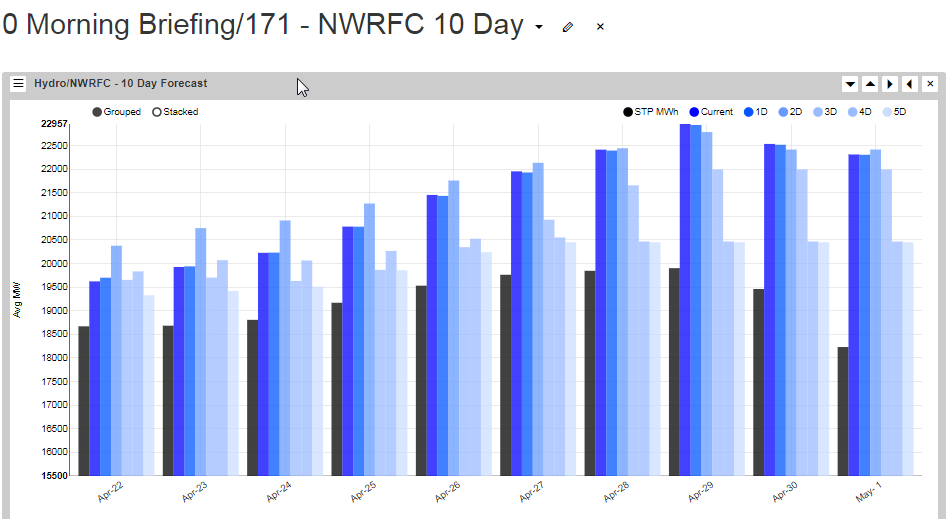 We already are seeing big changes in the 10 Day forecast as compared to last week’s STP.

Forget about April, it’s already in the books, May and out need to be your focus. I’d expect May to see a 2000-3000 MW bump tonight, doubt we see June do anything, but it may drift a bit higher. Since total water hasn’t changed, we may see July and August pull back, though we think July is still short water.

Coulee’s discharge keeps moving up, its 20kcfs higher than a week ago, and when the heat hits, we expect to see close to 200kcfs before regulation. Of course, May is the start of refill and the end of the draft. Perhaps BPA gets very aggressive on refill and catches most of the surge in the pond; it has the storage bullets to do that; if so, watch out for June as this is the type of water year where filling “too fast” becomes the problem. 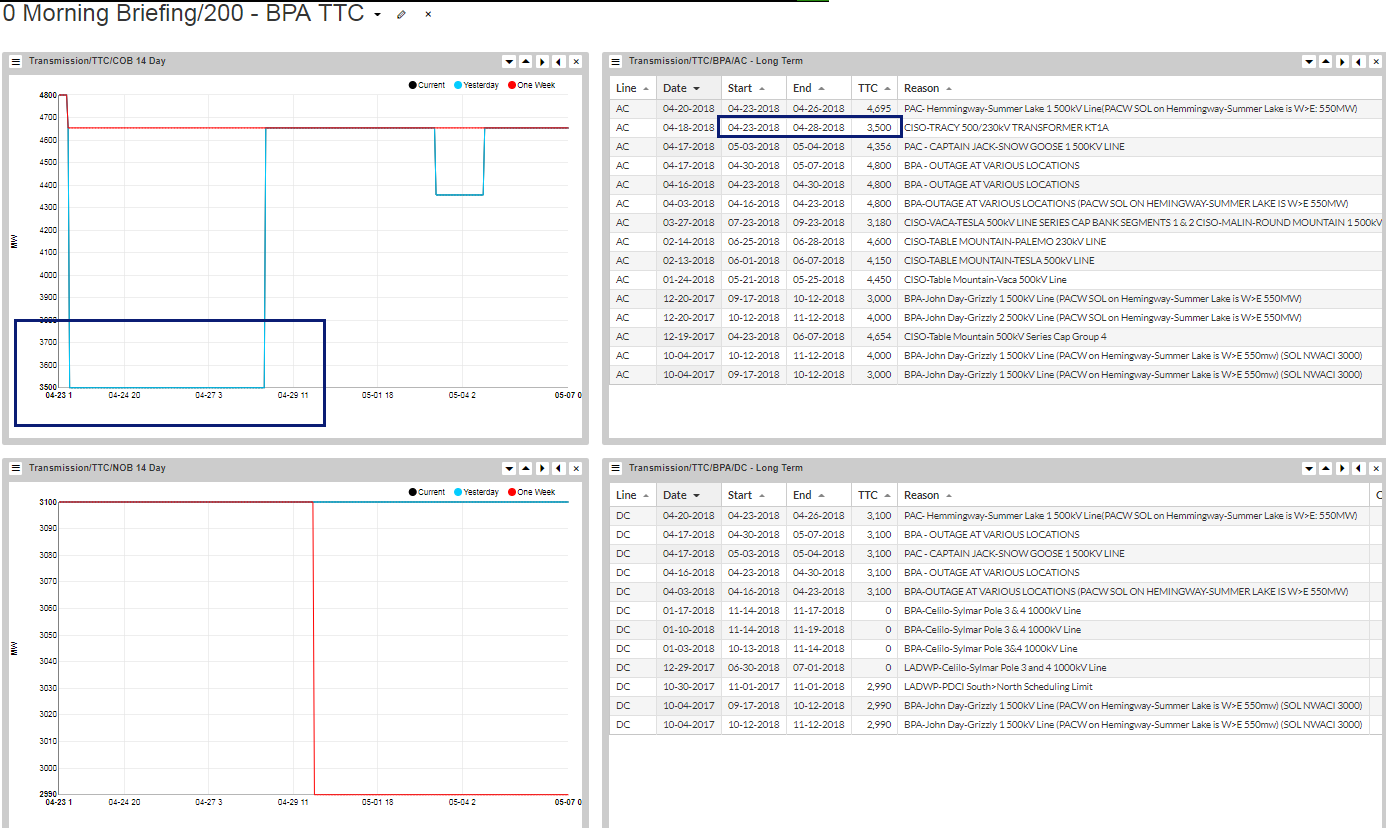 Beware of the AC derate; this wasn’t there a week ago. There is a modest 200 MW derate on the DC.

BC remains a buyer; the DC is full most hours, surprisingly the AC isn’t more full after a return of capacity.

A sea change in the Northwest outlook as the freshet will commence with these warm days. A return to cold will arrest the rate of melt, but we see no signs of cold, just warm or normal. The southwest grows hotter but not so much in the ISO.