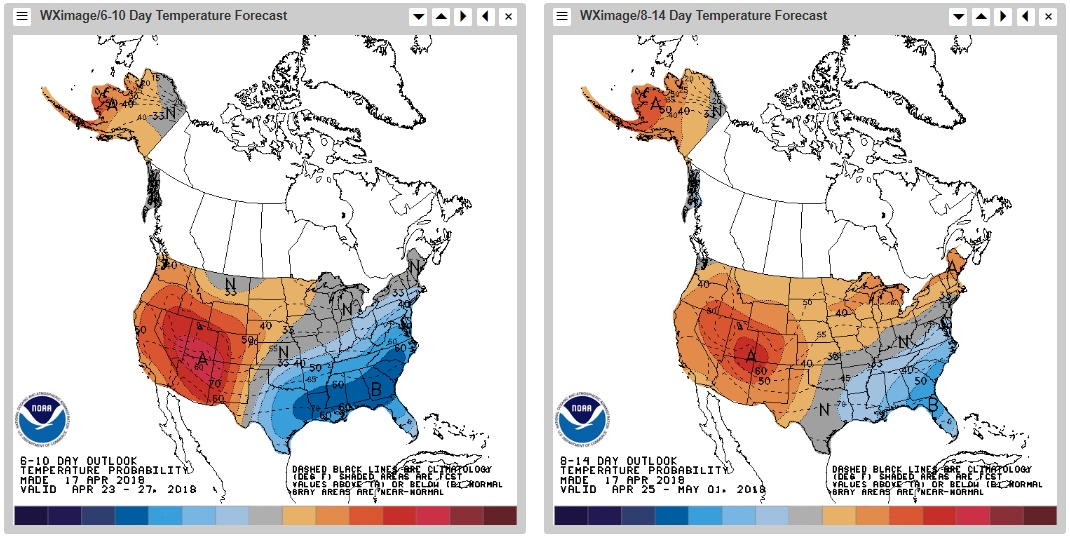 Temps are set to warm up considerably over the next seven days, especially in the Great Basin, but will finally extend into the Northwest as well.  The following week shows a return to slightly above normal for most of the West though heat will linger in Utah particularly. 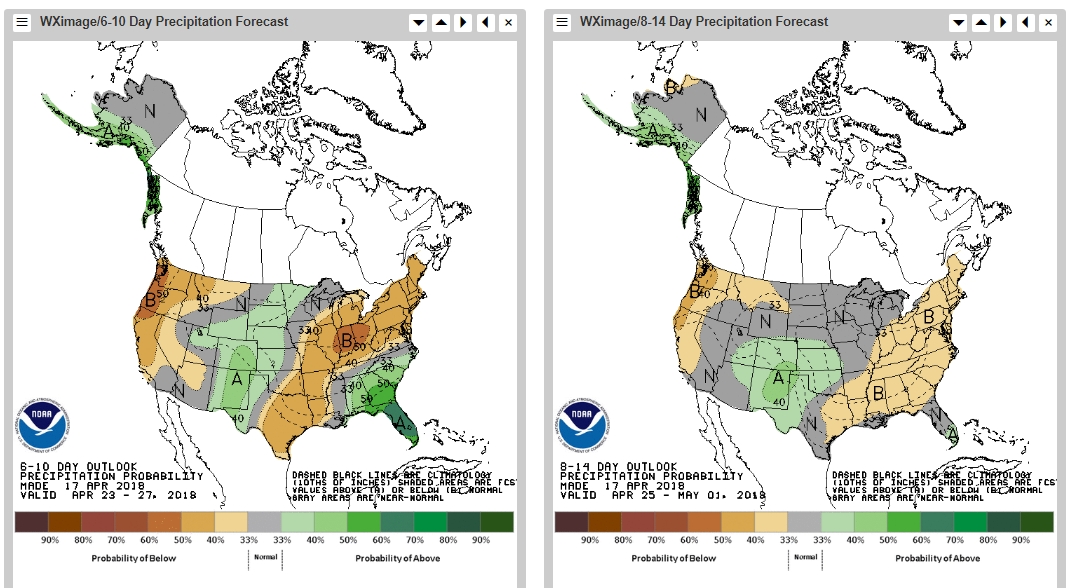 Not only are temps pushing north of average, but precipitation is expected to drop below normal as well.  The Northern Cascades in particular are forecasting dry over the next seven days.

Most hubs remained relatively unchanged over the past three days, but AECO stands out with its $0.30 increase at 36%. 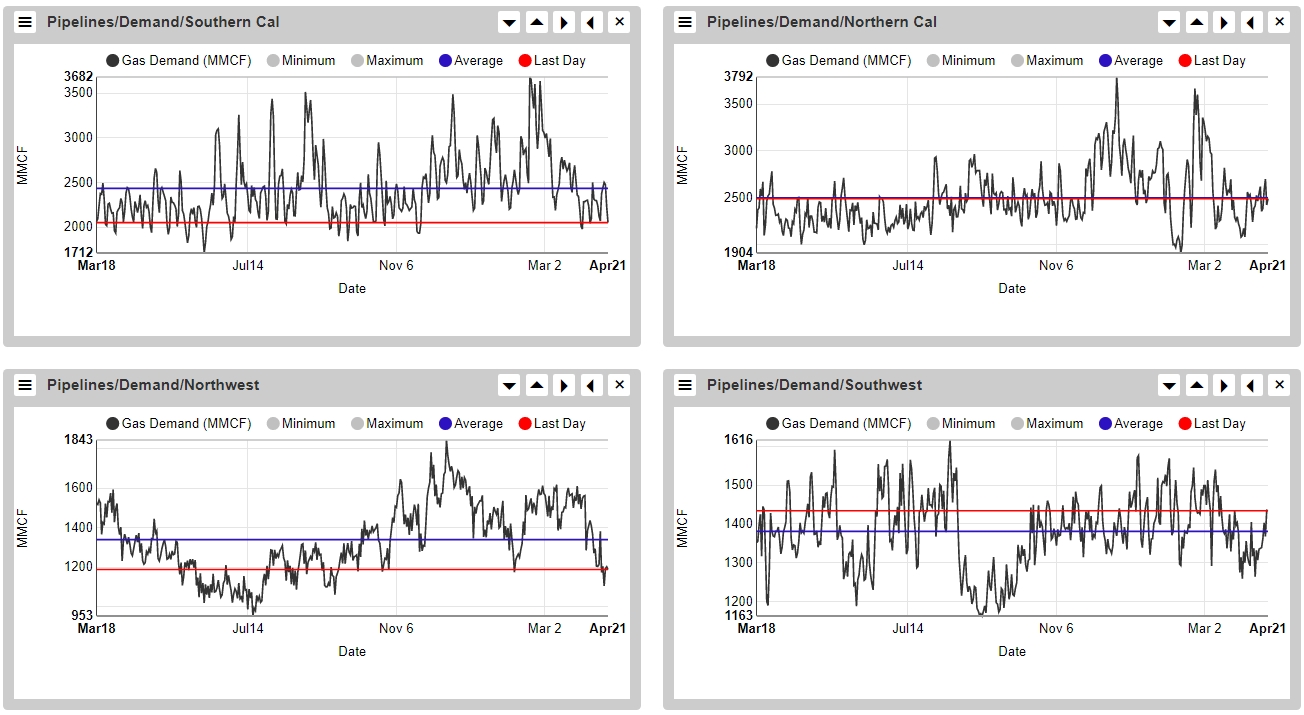 SoCal continues to bounce between 2000-2500 MMCF.  Northwest and Southwest are moving in opposite directions, up and down, respectively.  Mid-C has shed 384 MMCF since the 15th. 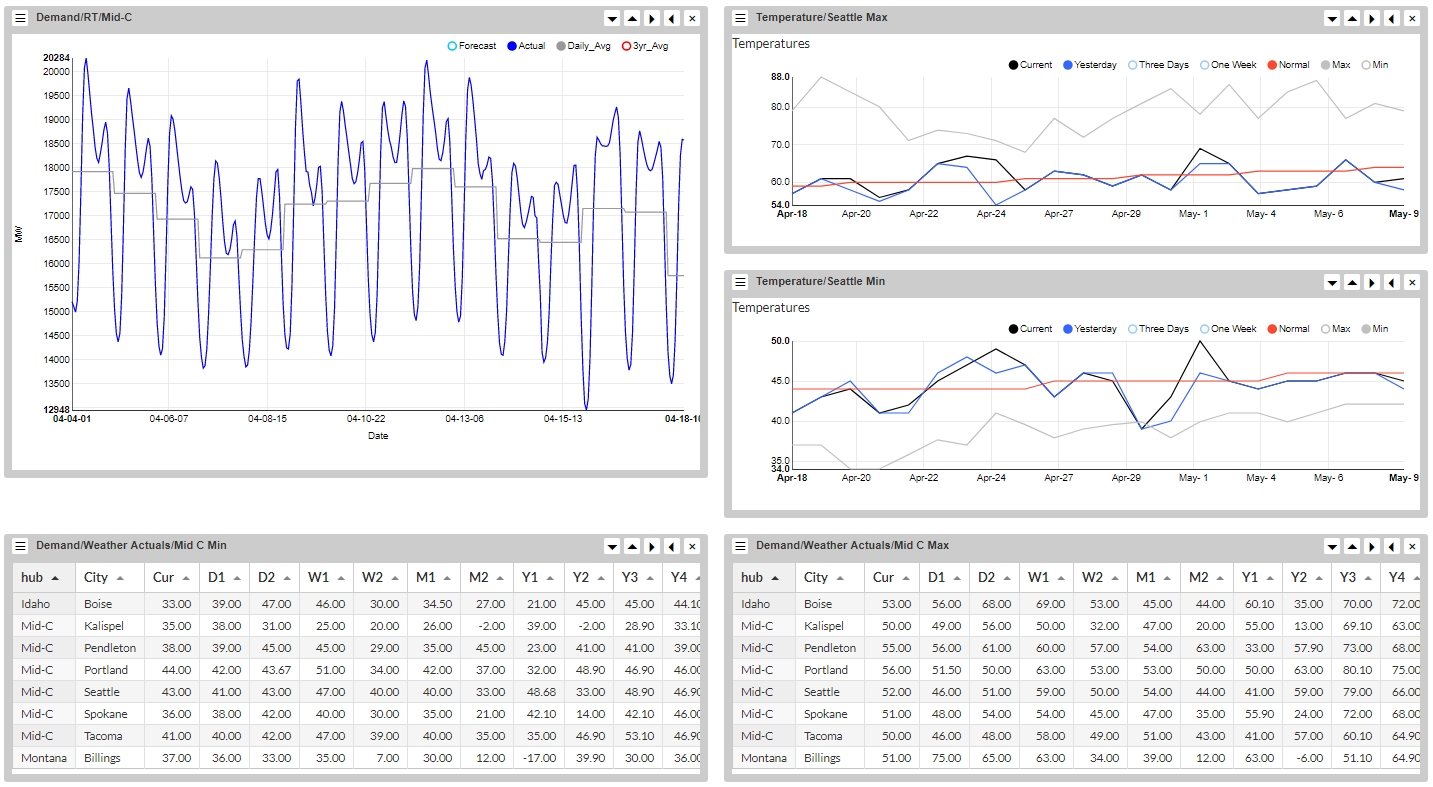 Seattle lows should stay below normal through the weekend but will still amount to temps in the low 40’s — nothing falling into the 30s.  Next week has potential for a return to mid-60s. 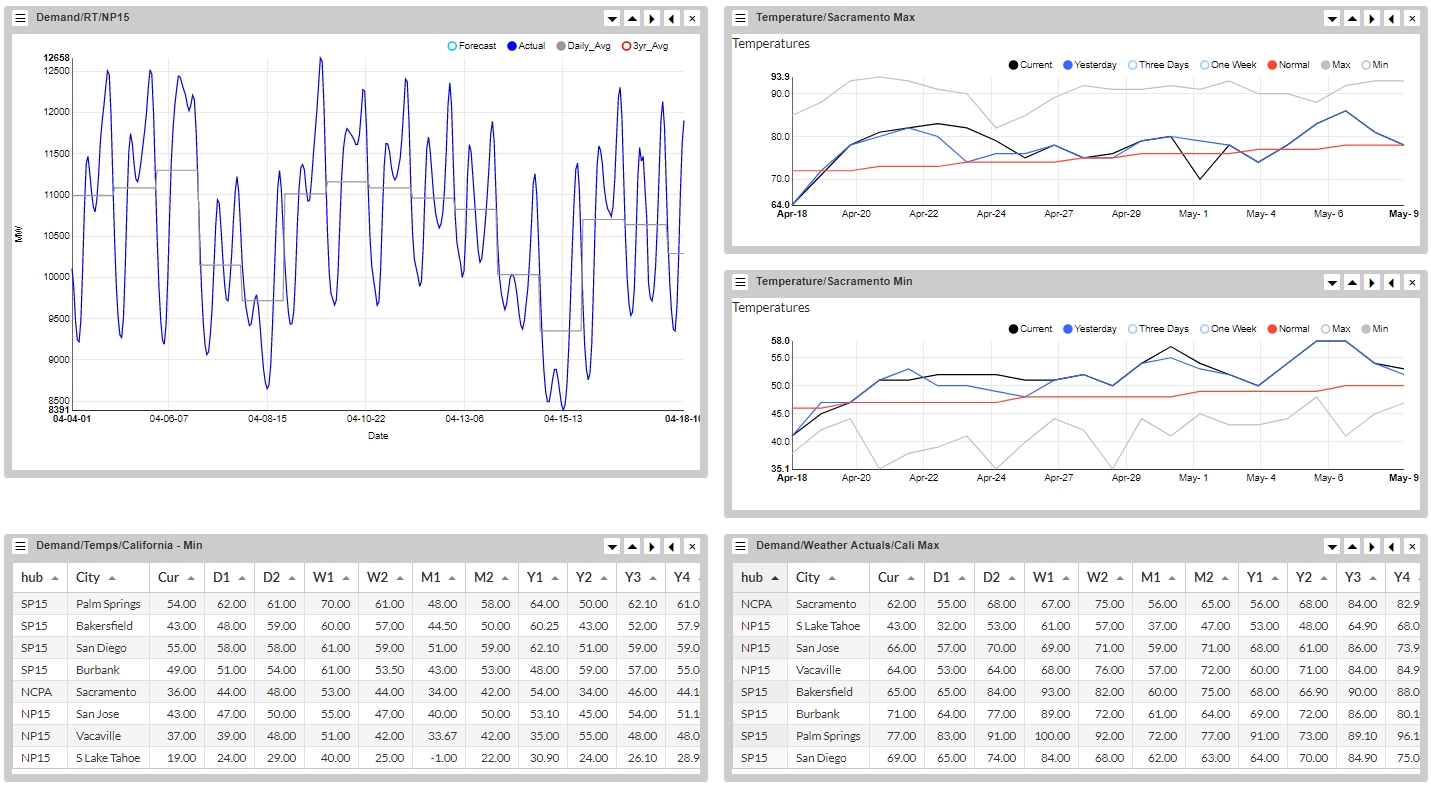 Demand fell 62 MW day on day in the daily average and is down over 500 MW week-on-week.

Mild temps for Sacramento today at 64, but a warming pattern is on the way as highs in the mid-80s are in store for next week.  Temps should stay above 50 as night as well.

Burbank forecasts 80-degree highs beginning this weekend but a return to low-70’s by next week.  Daily lows are expected to stay above normal for all but one day over the next three weeks. 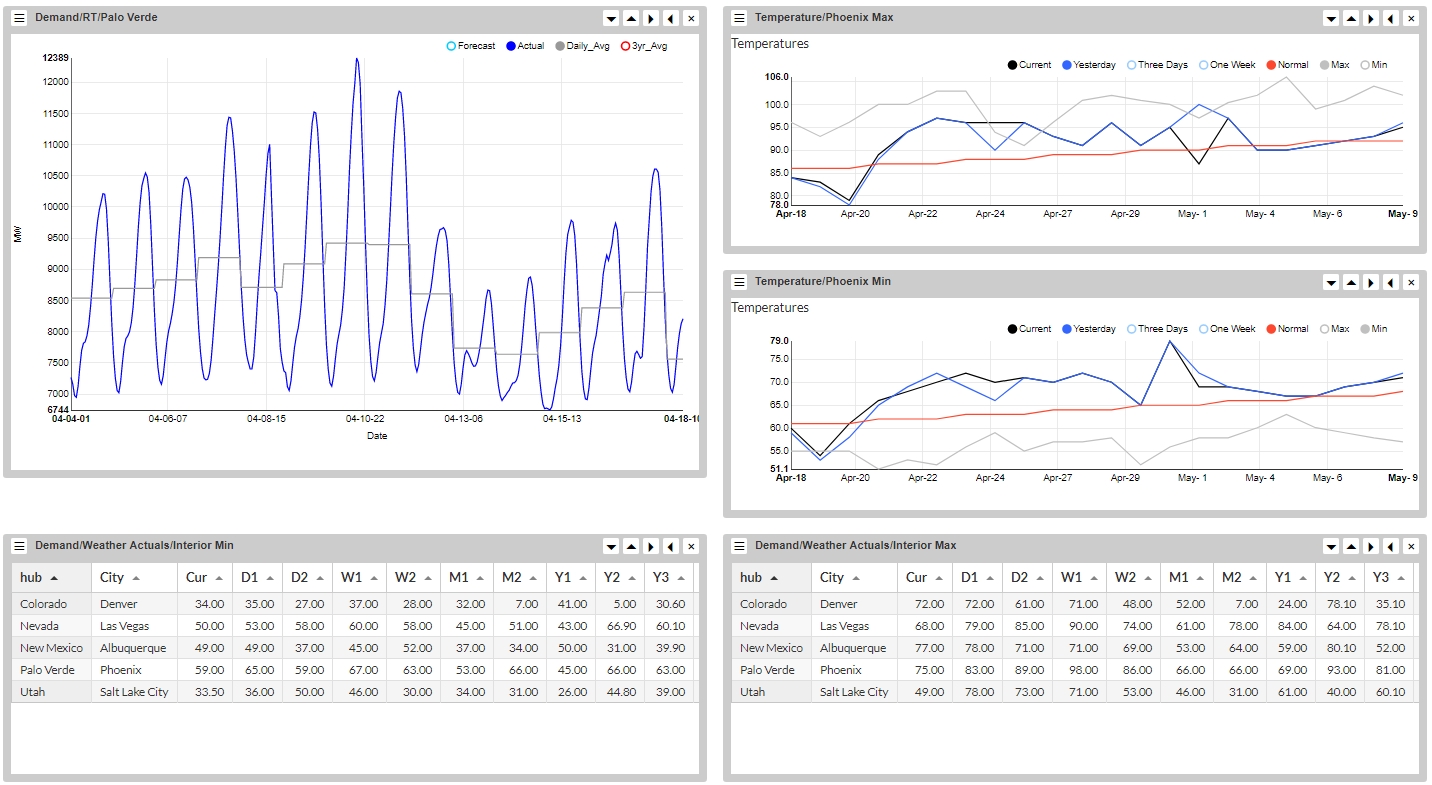 We should see a mild end to the week in Phoenix but a strong warm up beginning next week.  Temps should sustain 90+ degrees for the next work-week and peak in the high-90’s. 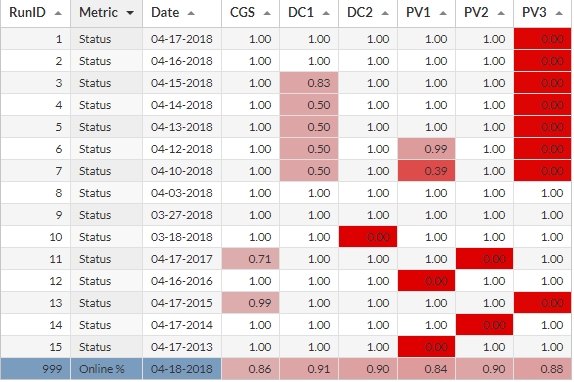 Last week’s wild ride appears over as all but one plant has returned to 100%.  PV3 remains offline at 0%. 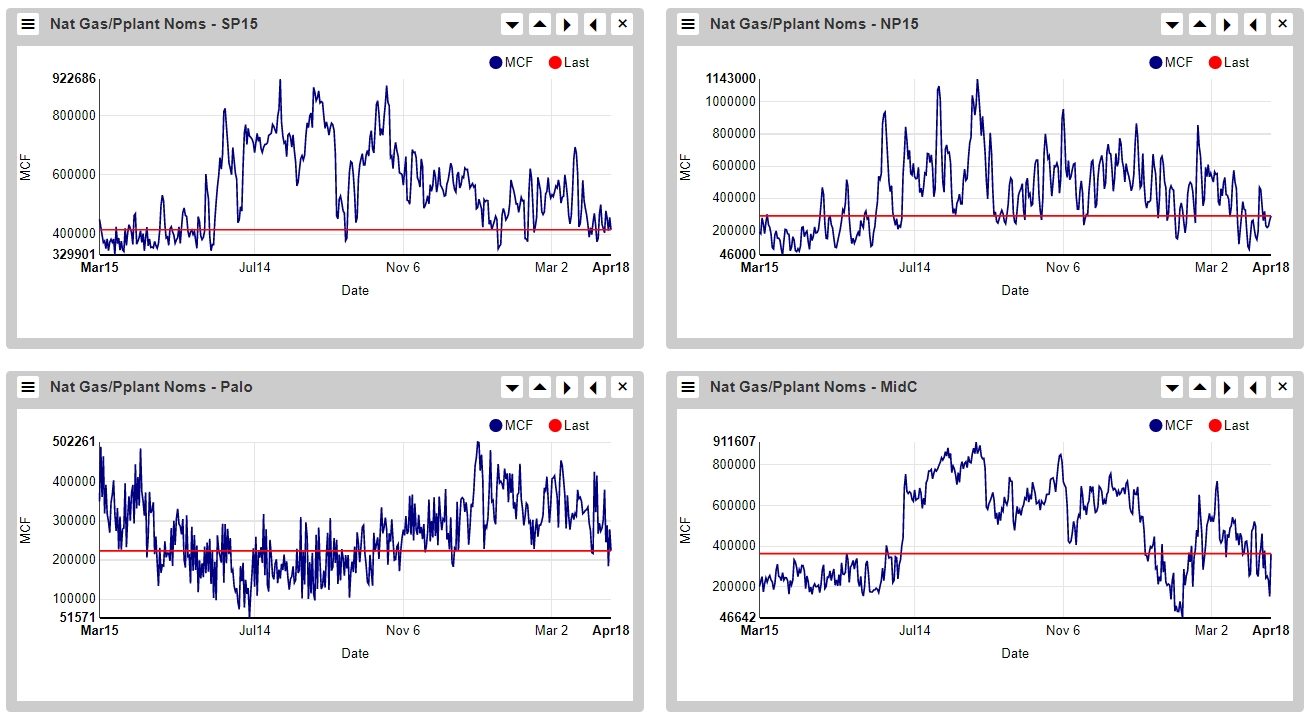 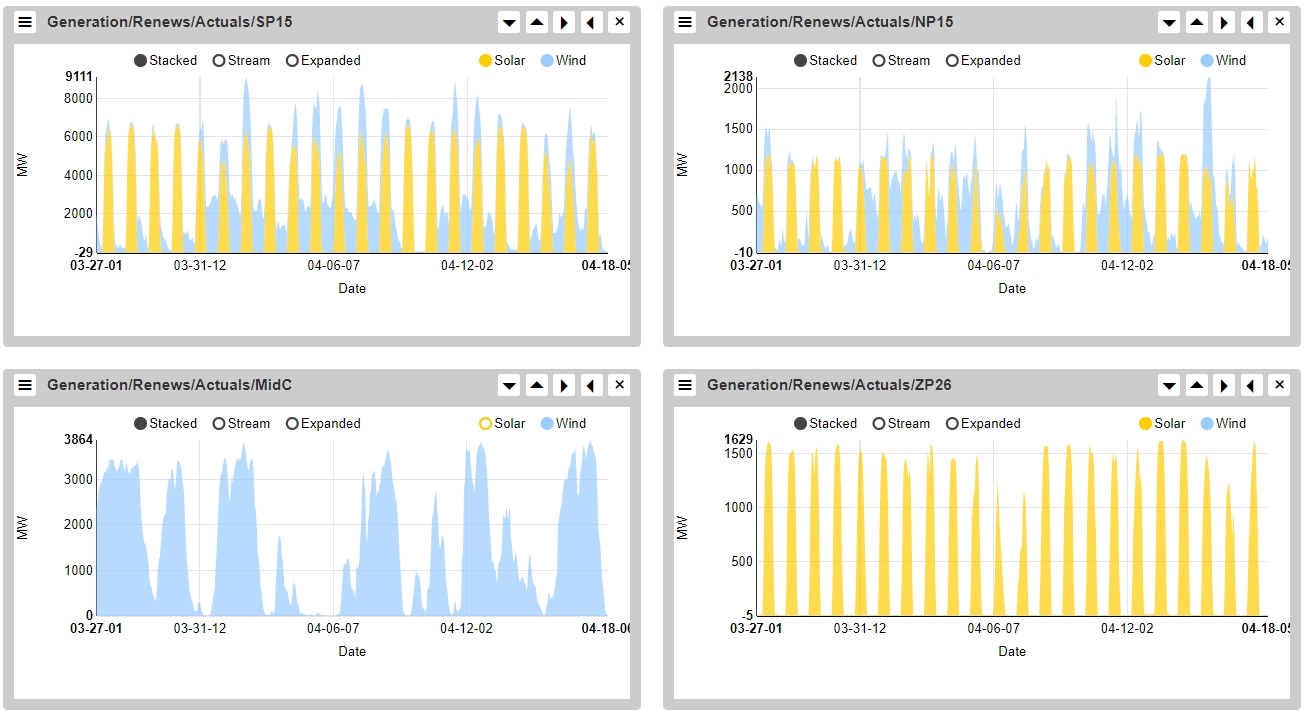 SP solar increased 1,200 MW day-on-day yesterday though Monday’s deficiency was more than replaced by a 1,700 MW increase in wind generation.

Mid-C wind tied an hourly generation high at 3,862 MW yesterday.  Generation remained heavy for most of the day overall as well. 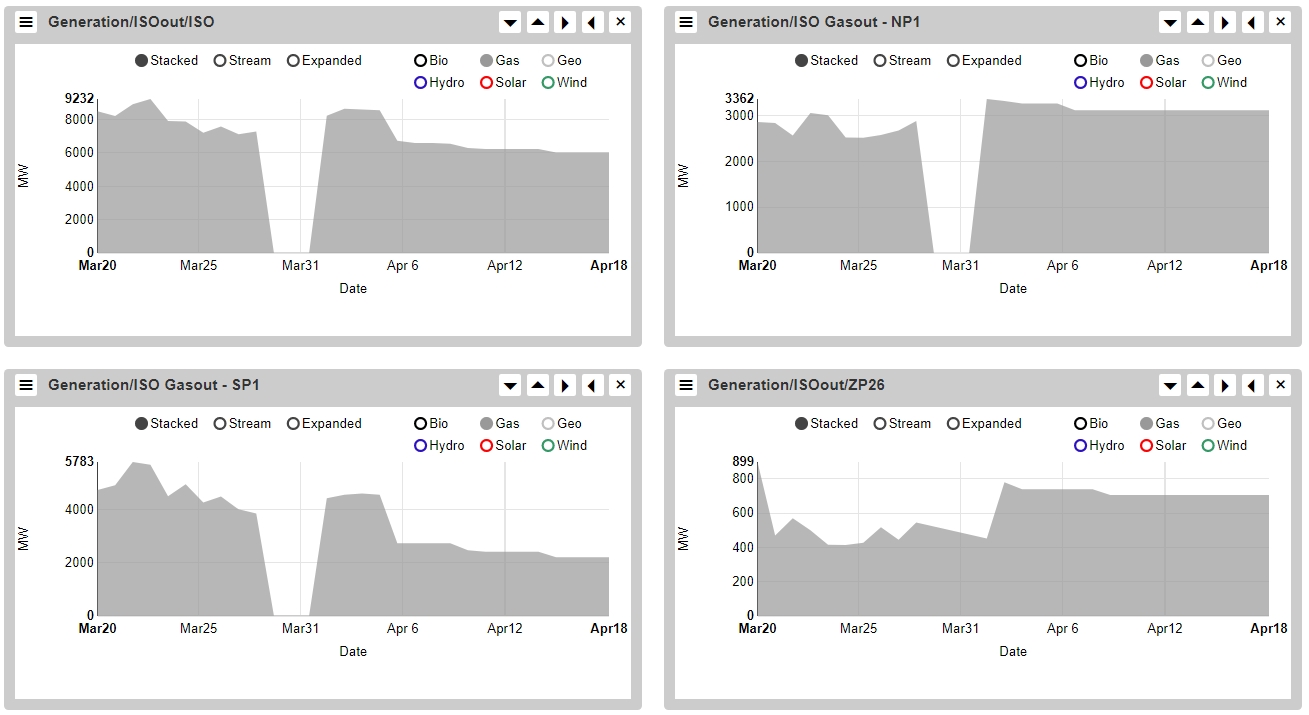 Another quiet day for ISO gas outages as all hubs remained relatively unchanged.

NOAA’s dry forecast is reflected here as no Northwest station is projecting more than a tenth on an inch of precip until the 28th.  April had been wet until this point, will be interesting to see how the month averages out if the forecast holds true.

Nearly bone-dry in NP as well.

Tahoe is going to heat up considerably over the next few days as daily highs move from the low 40’s today and tomorrow, to sustained mid-60s into the weekend. 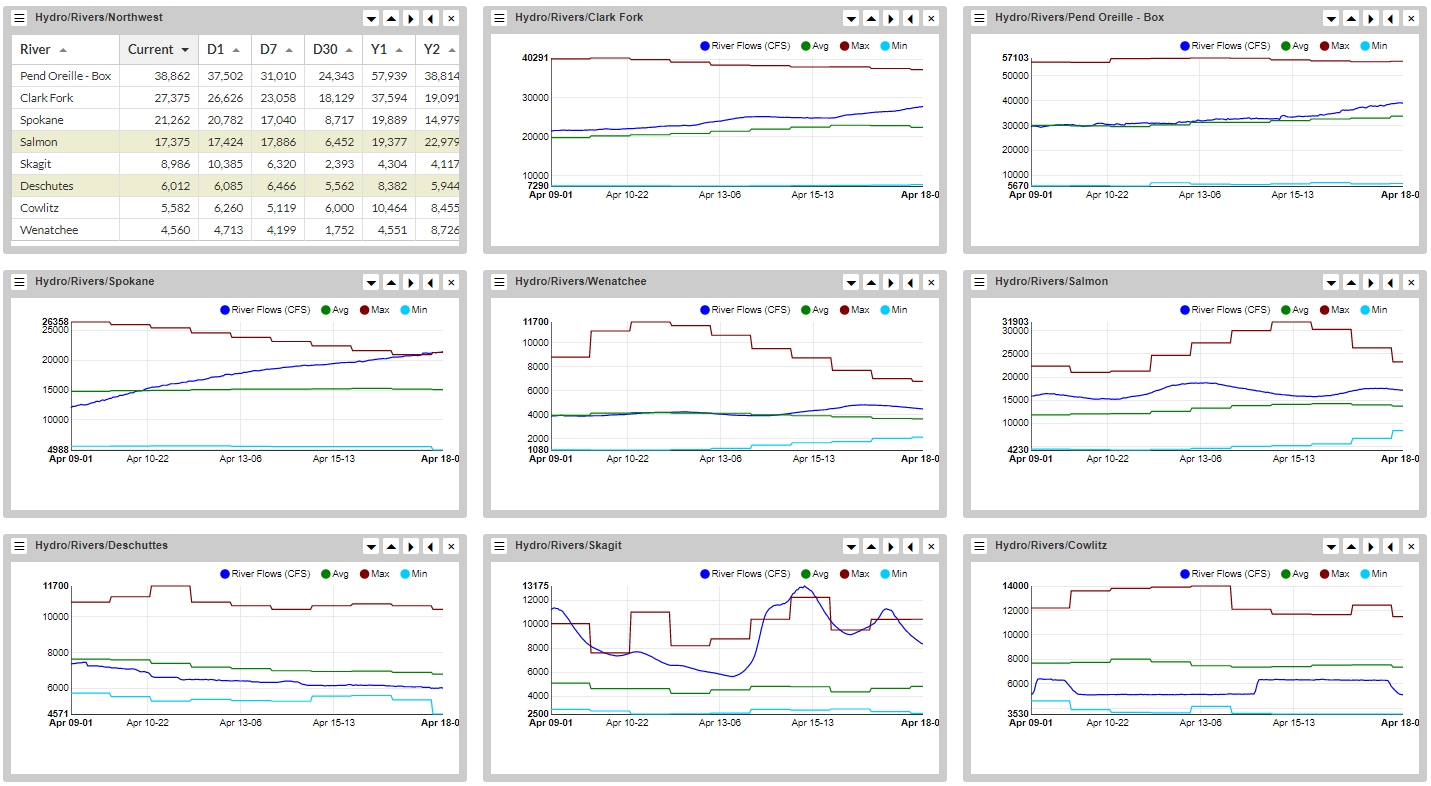 Spokane River is marking new highs in flows beginning yesterday and the runoff has yet to begin in earnest.  The Pend Oreille is trending north as well as flows are making a strong deviation from average.

Dworshak added nearly 2.1′ over the past day and Grand Coulee’s dropped 1.1′ from its elevation levels. 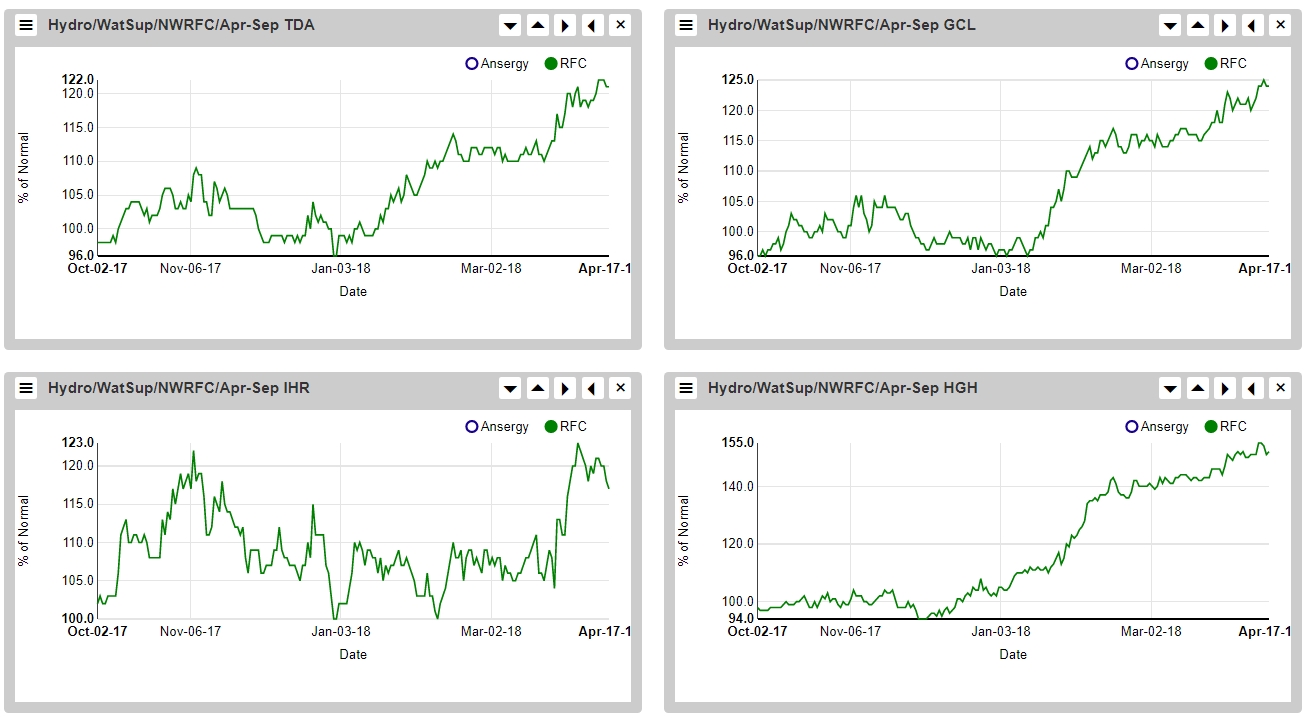 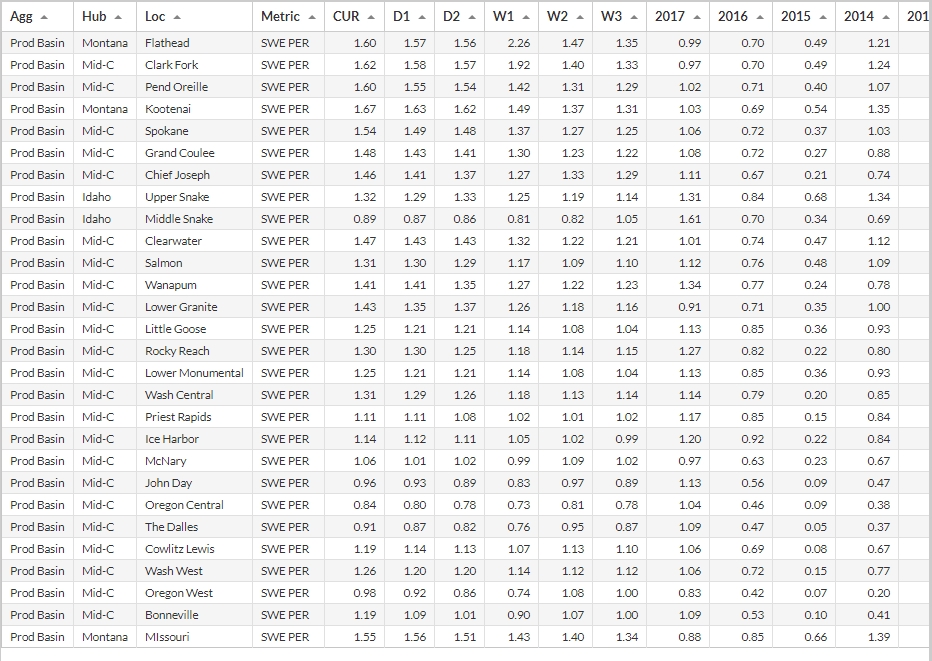 Flathead’s anomaly took a big hit this week, falling from 226% last Wednesday to 160% today.  Clark Fork fell 30 percentage-points week-on-week to 162%, marking the second largest movement in that span of time.  most other hubs managed to increase their anomaly figures. 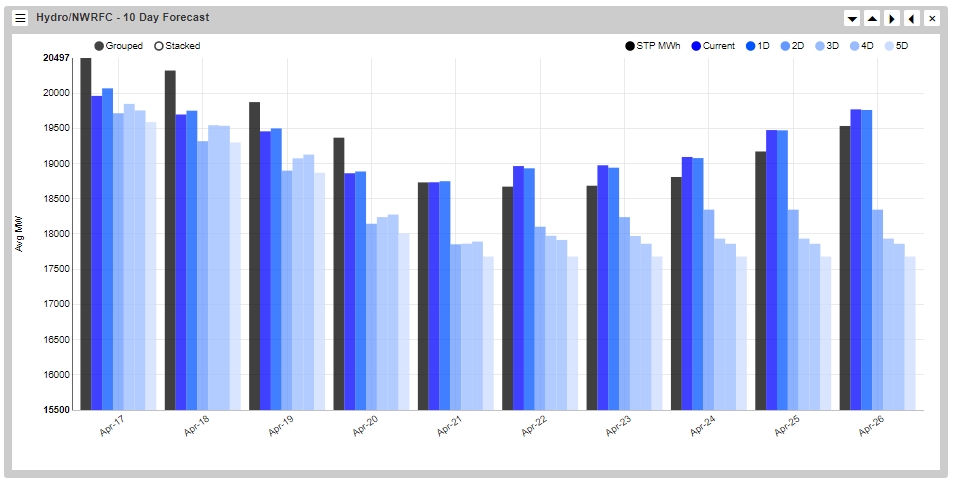 The STP forecast is pacing ahead of the 10-Day for each of the next four days then switches position thereafter.  Both call for a low around the 22nd of April before increasing through the end of the ten days.

Hydro continues to fall after peaking last week though HL Max is relatively holding its ground. 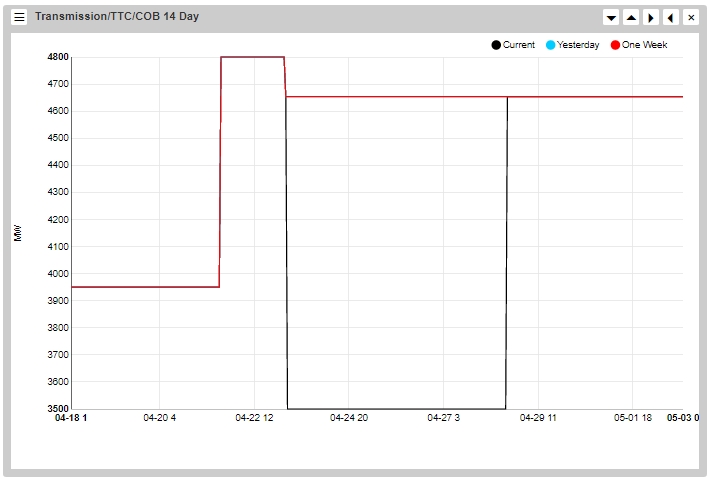 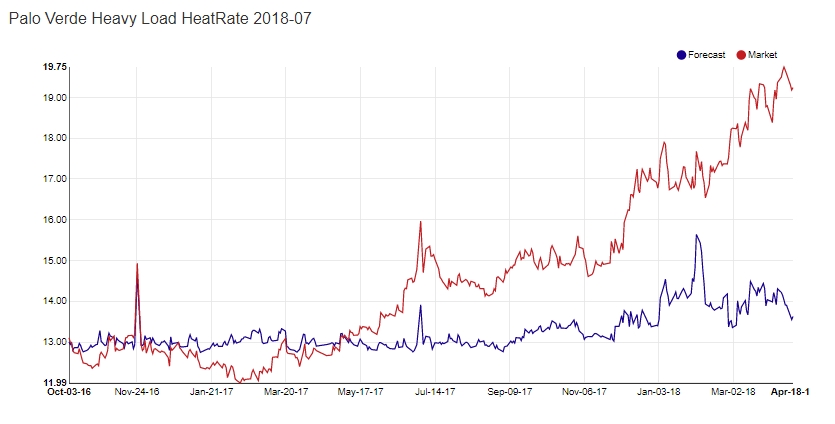 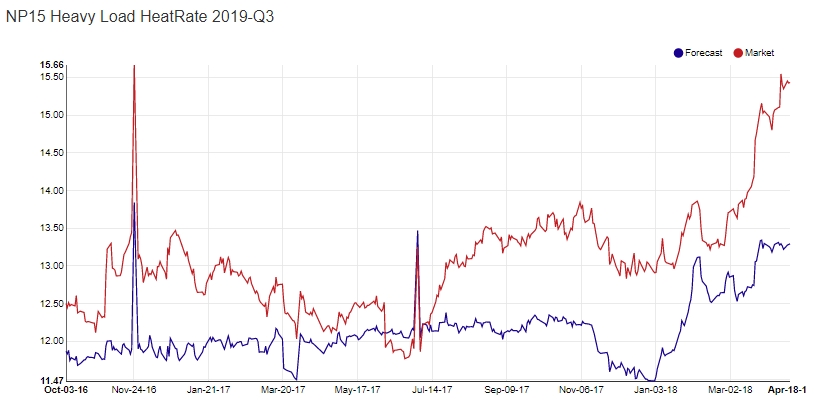 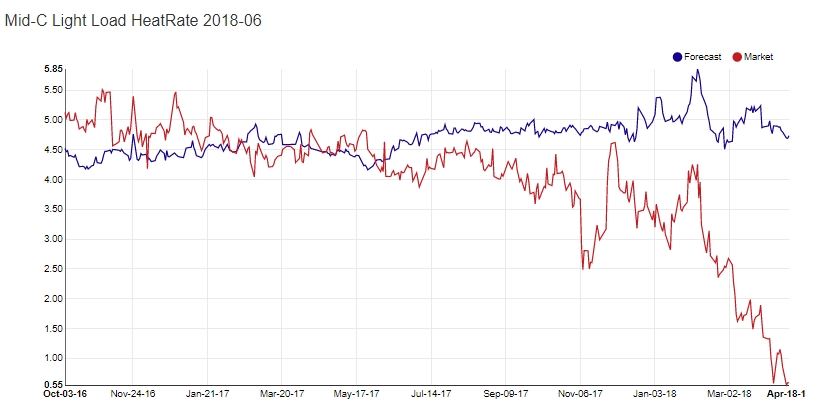