Spring is here, and we’re all waiting for the weather to warm up as that will trigger some volatility; right now things are relatively stable, even dull. We did see some congestion in the DA markets:

And it wasn’t just SP that congested, it was all the southern nodes:

All except NP, CptJack, and NOB; across all the solar hours. That isn’t unusual, but it hasn’t happened for weeks, so its “news.”

The big question for anyone with a kw or more of Mid-C exposure is … “Has runoff started?”. The answer is NO, despite NOAA’s seemingly bullish 6-10 day: 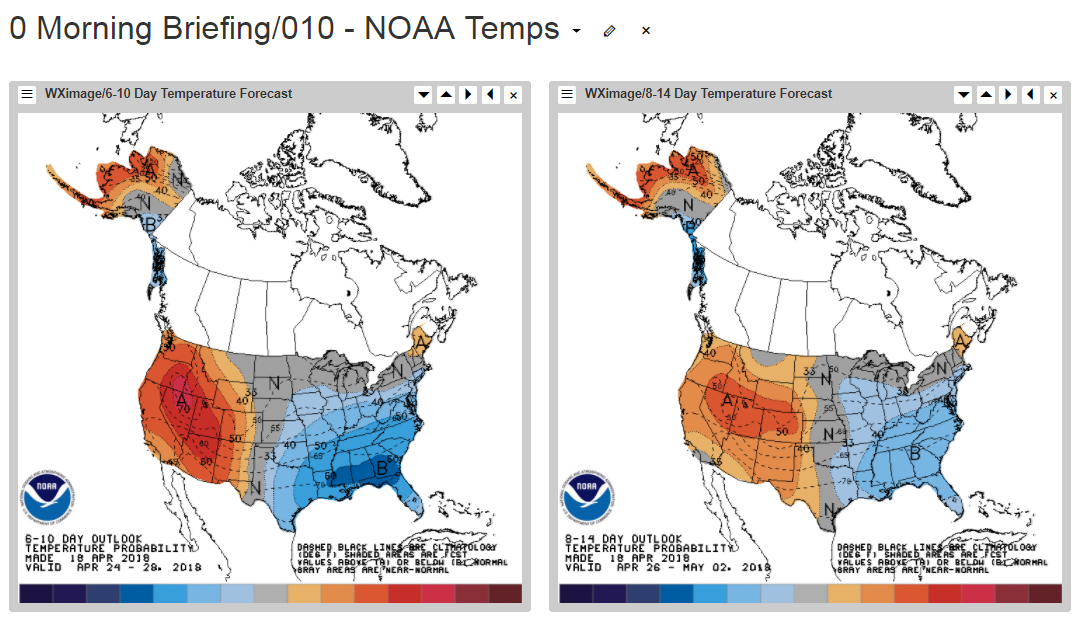 You look at those plots, and you’d think everything would be melting, but it’s not, just not that warm:

Boise has all days above freezing, you will see the Snake rallying, but the Upper Columbia won’t. Spokane (2000′ elev) drops to the low 30s at night and rallies to the 60s during the day; but check out Kalispell (3000′), nighttime lows remain below 32 degrees. The outlook is warmer than a week ago and flows will continue to build, but don’t expect the Mid-C cash to crater anytime soon; probably 0% chance to trade single digits in April. May, who knows.

Everyone is up in arms over the bullish summer ISO markets, these are crazy bullish, going up for almost 12 months straight. 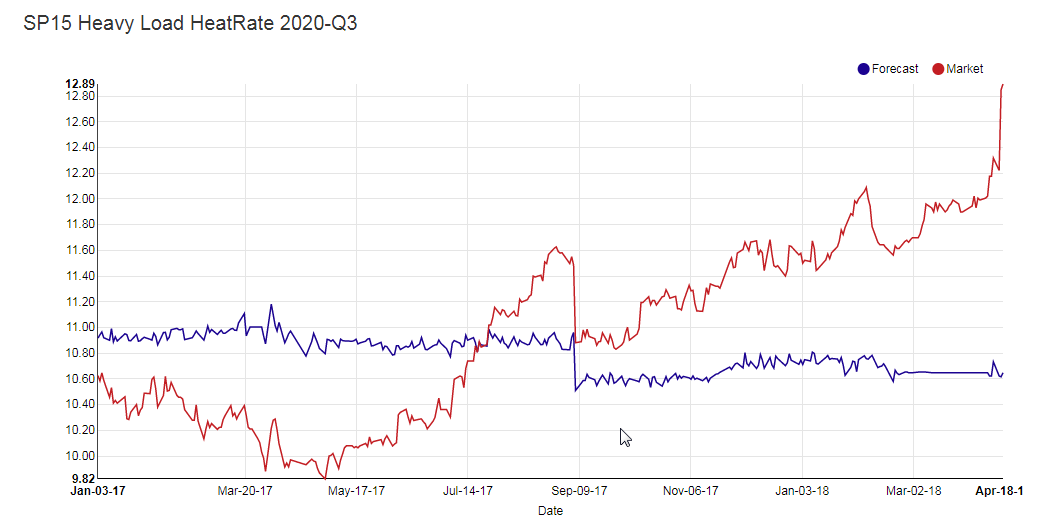 I’d like to say its gas-related; the fear of rolling gas-outs across LA has driven us all into a frenzy and now Q3 SP is worth more, but that would be Fake News. There isn’t a problem in Socal Gas this summer; the zone has more gas than it knows what to do with as evidenced by the collapsing spot price. Let’s dive deeper into SCG: 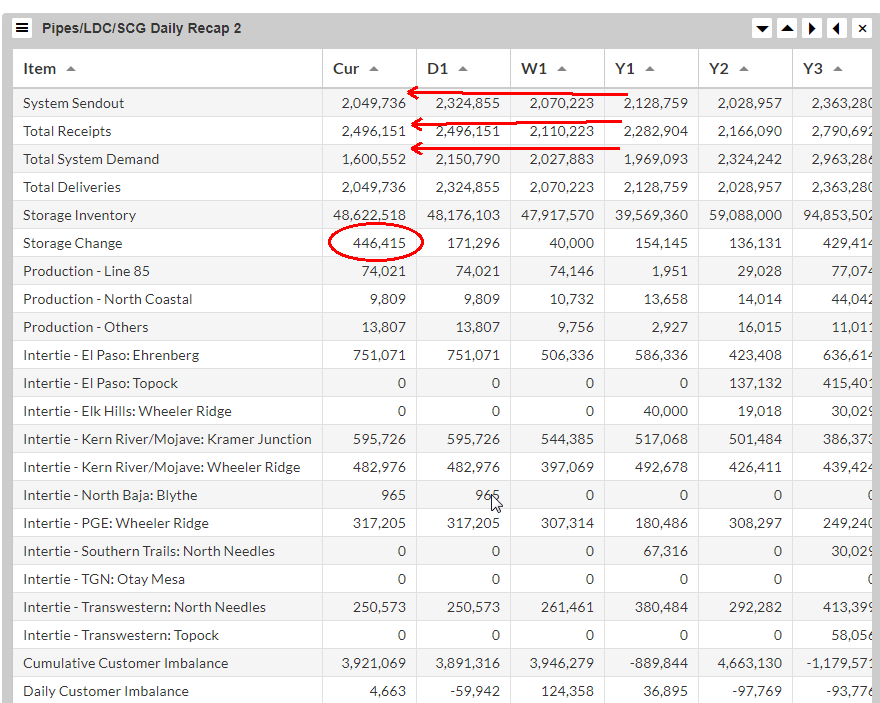 From a year-on-year perspective, System sendouts are down, total receipts are up, and total system demand is way down. All of which means the LDC injected a near record amount of gas for an April day.  Socal only has problems in the winter when Sys Demand is greater than three bcf/day; it won’t even get close to that until maybe mid-November.

We think SP’s relentless bull run is about 90% hype and 10% real fear of gas. But that doesn’t mean we’d stand in there and short it; we like our job too much. Perhaps some of the bullishness reflects merely the reality of a system that is moving away from thermals? Not sure, but bullish it is. 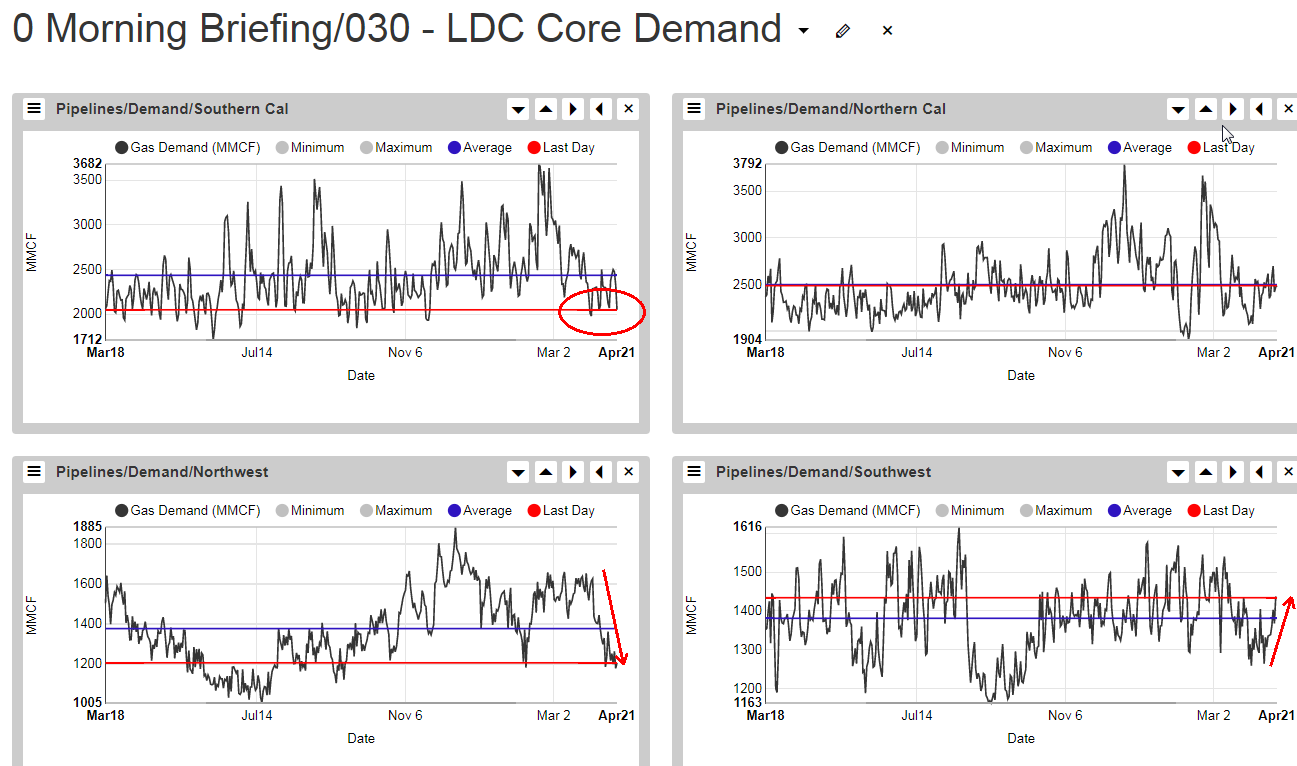 WECC gas isn’t bullish; most zones are posting seasonal demand lows; the Northwest is dropping the fastest. Except for Palo, its seeing system demand spike up as Az serves AC loads. 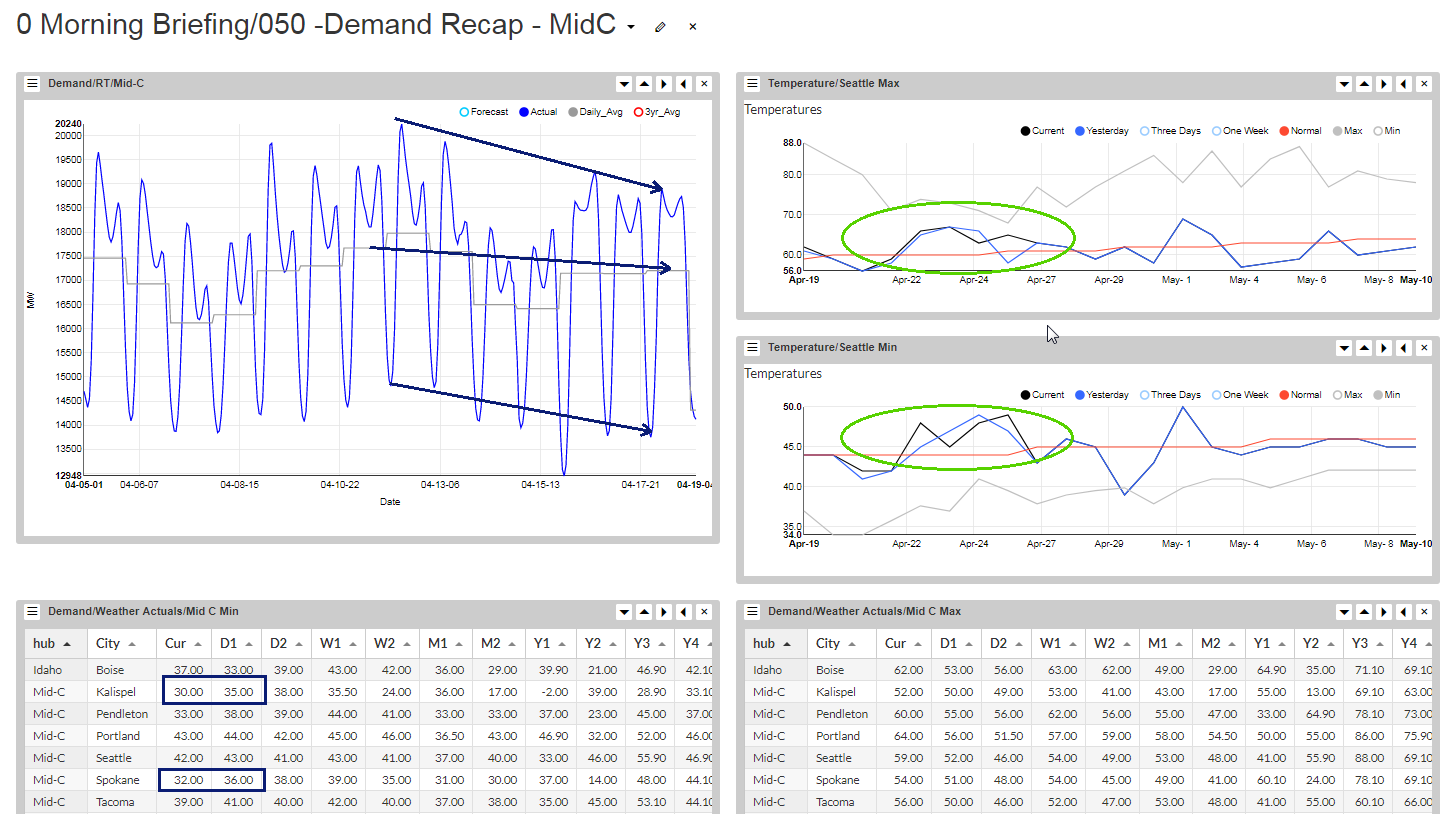 Not only is gas demand cratering, so is power demand; and that trend will extend into next week off of warming weather and declining HDDs. Seattle sheds about 10 HDDs next week, expect power demand to tumble even further. 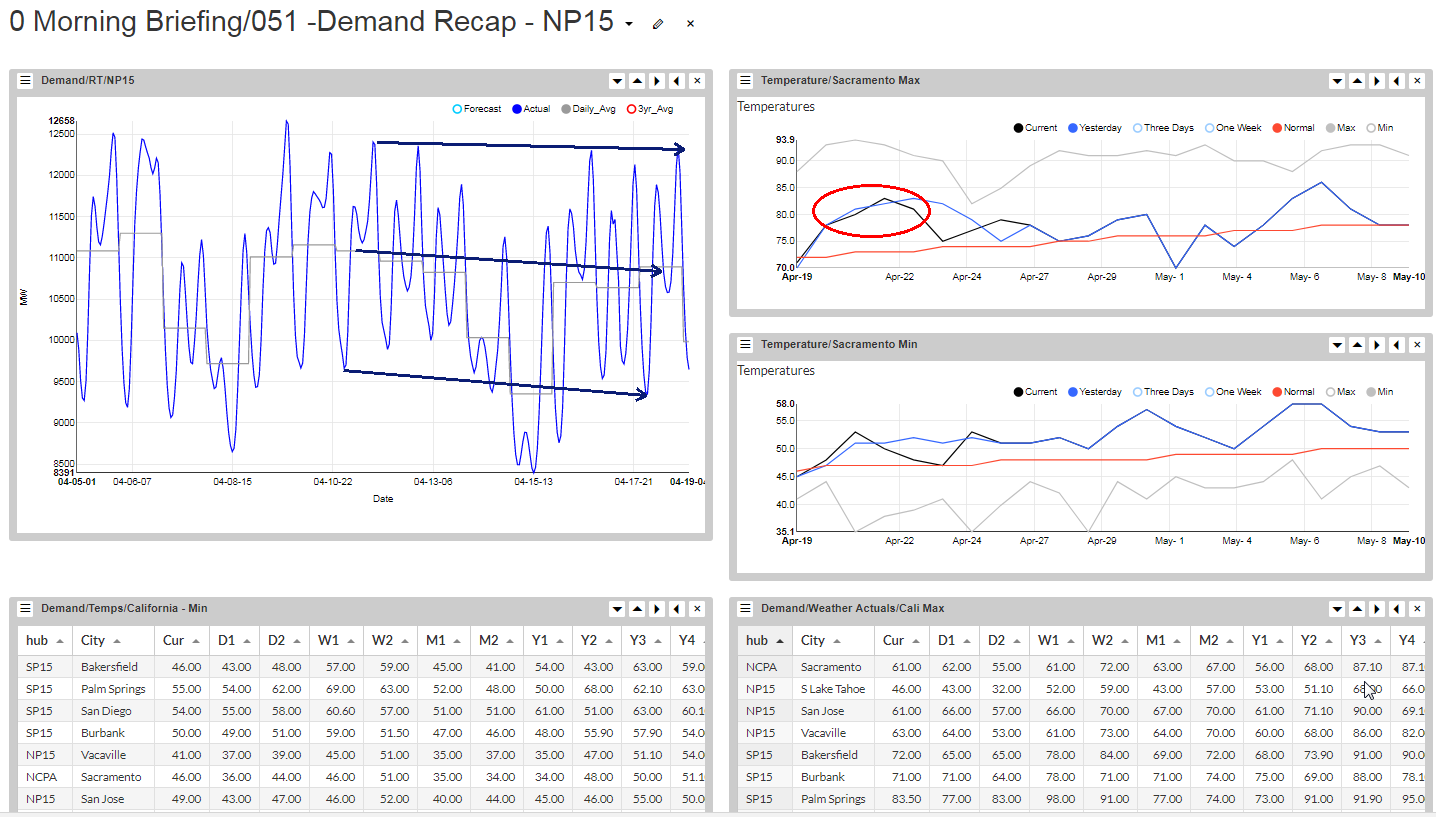 NP’s loads are off, but slightly. Next week those will rally off of some unseasonably warm weather – like the mid-80s in San Jose. 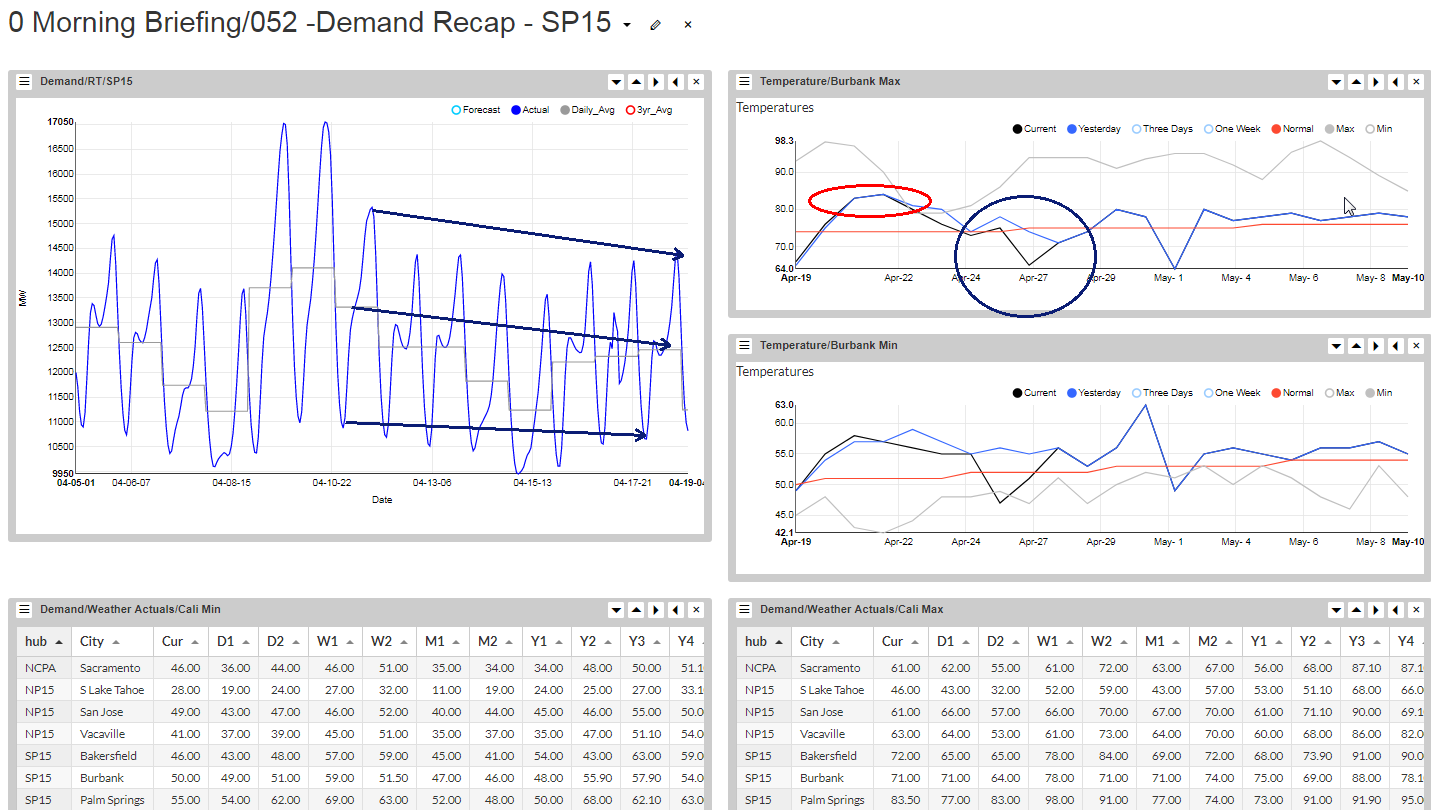 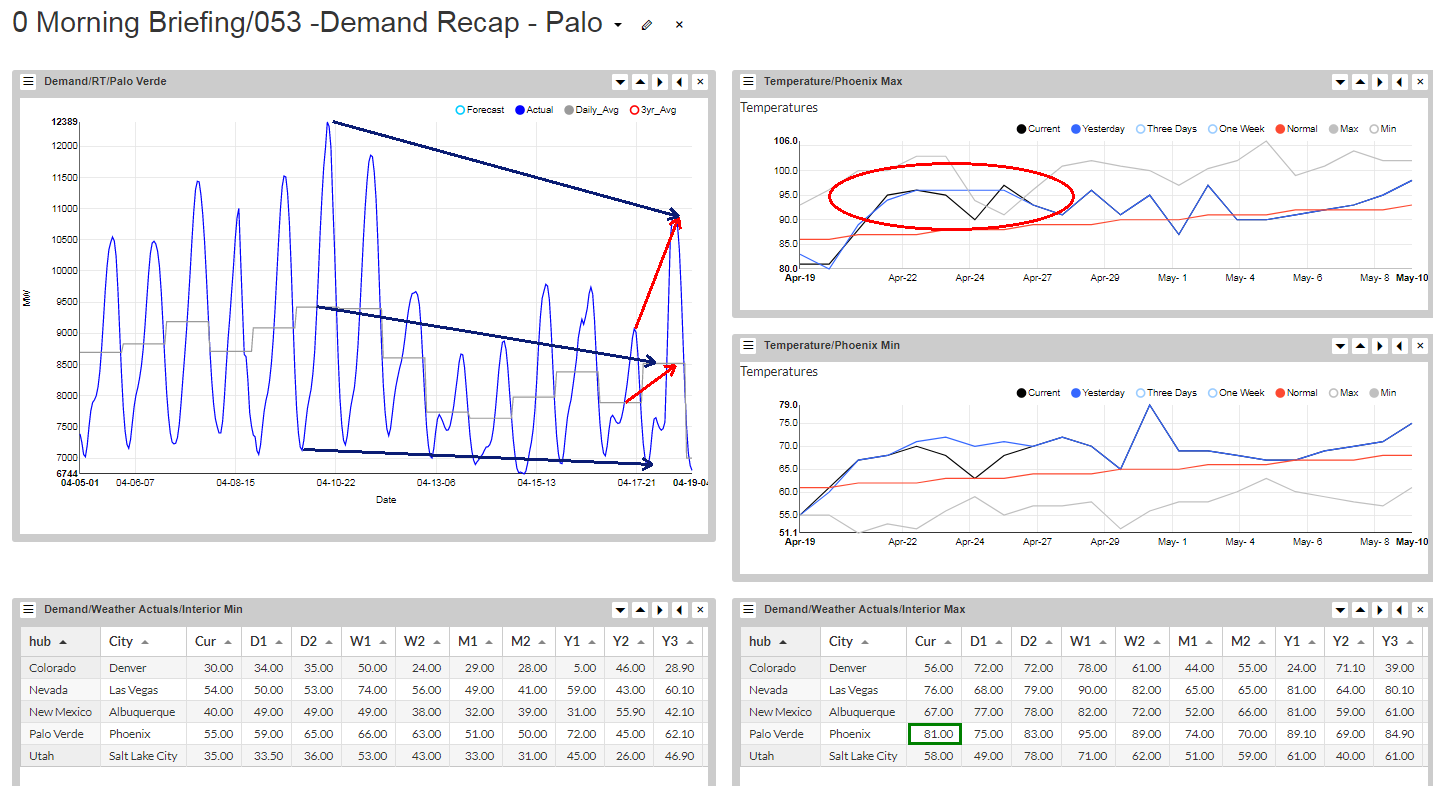 Palo saw its loads spike off of Tuesday’s lows and next week we can expect another 2000-3000 peak demand as temperatures approach 100 degrees in Phoenix. 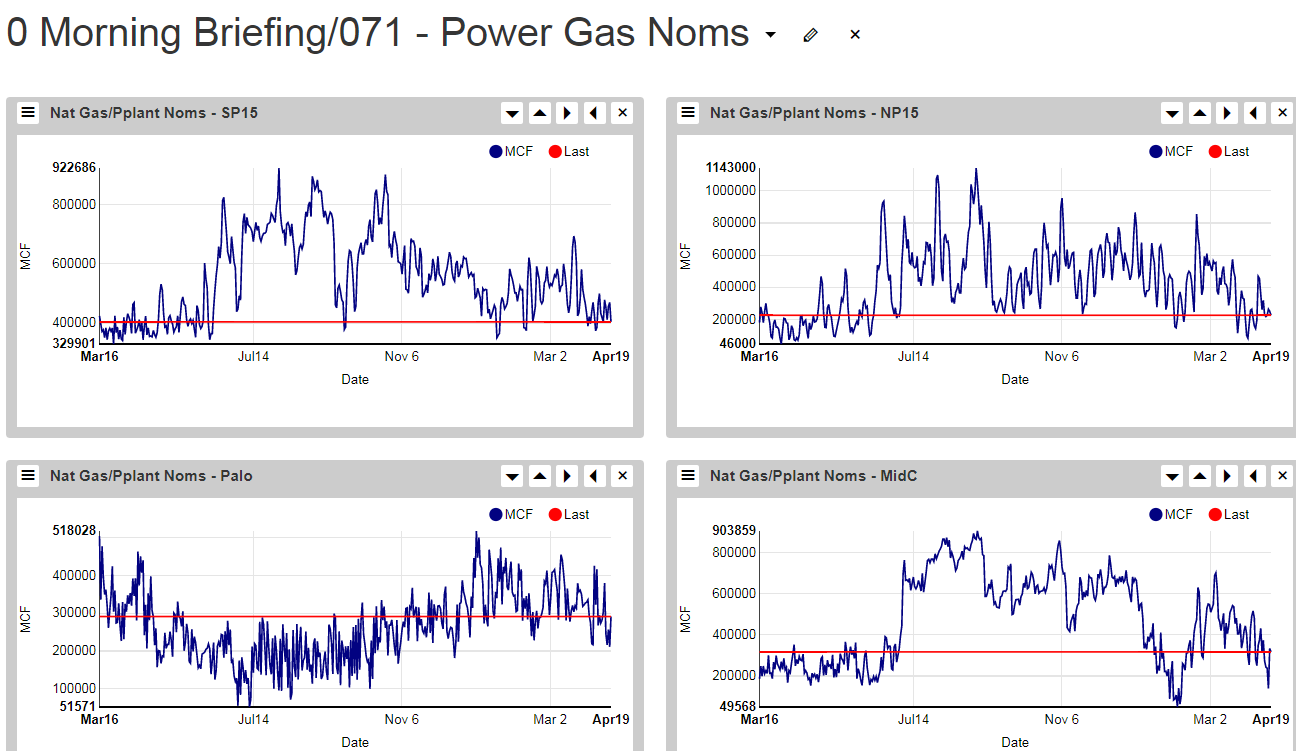 Power plant gas nominations are relatively weak everywhere, except the Southwest, and the Northwest saw a slight spike. 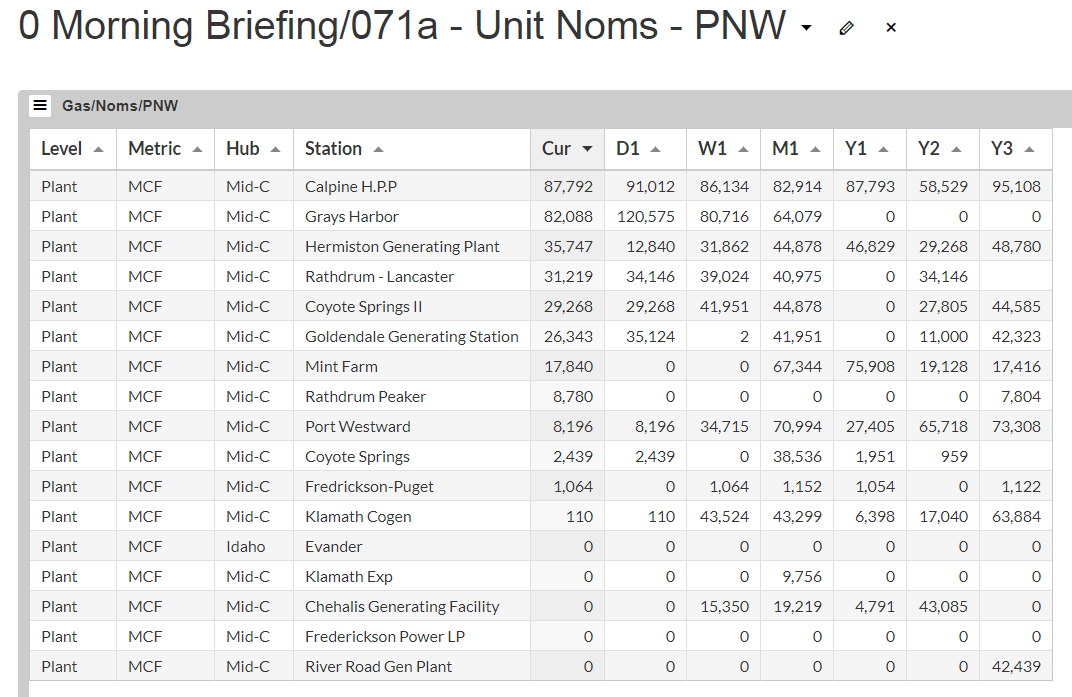 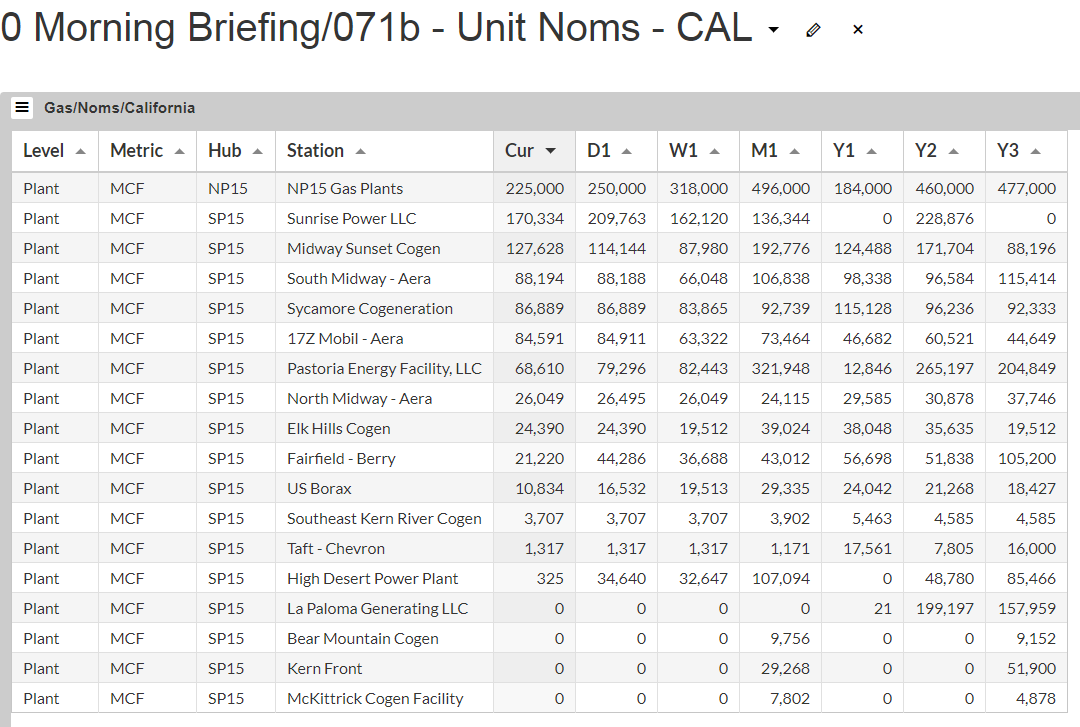 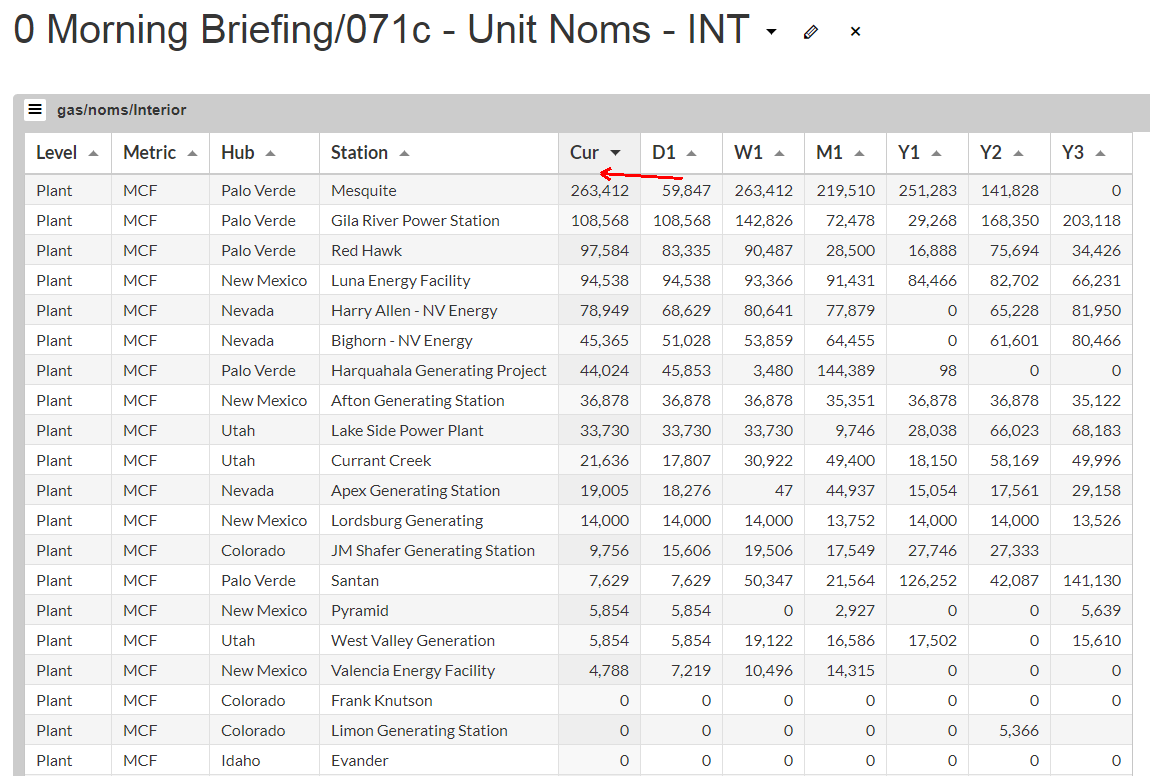 Mesquite seems to be the swing resource at Palo; its noms jumped 200 MCF/day. We aren’t Genscape, but we can show hourly gen for three Palo plants:

Griffith is cycling hard suggesting it is on hot standby most hours of the day; Gila River saw a big spike yesterday but mostly is idling around 200 MW; New Harqualah is off-line. 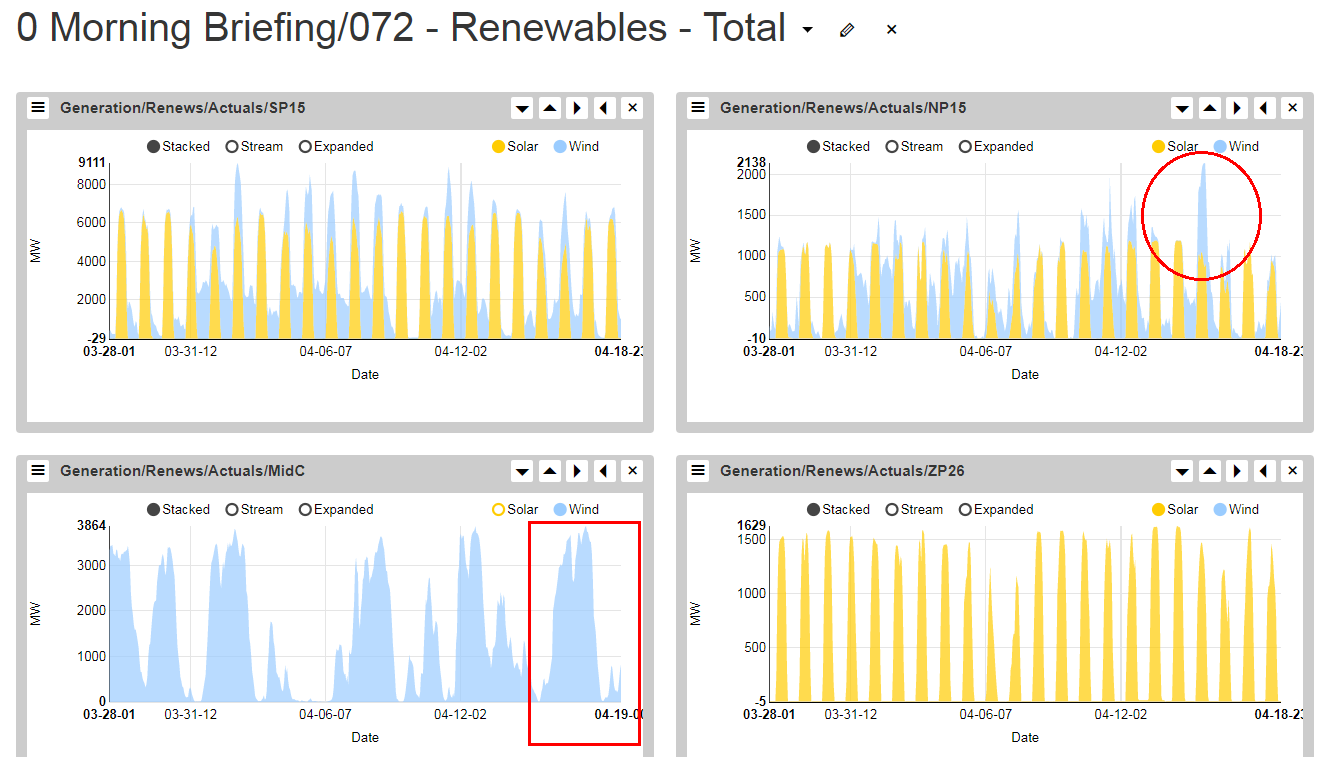 NP saw big wind a few days back and didn’t back down its solar, resulting in an additional 1000 MW for a few hours. The MidC has also seen strong wind, but not sustained across all hours suggesting BPA may be dispatching the resource for economics. 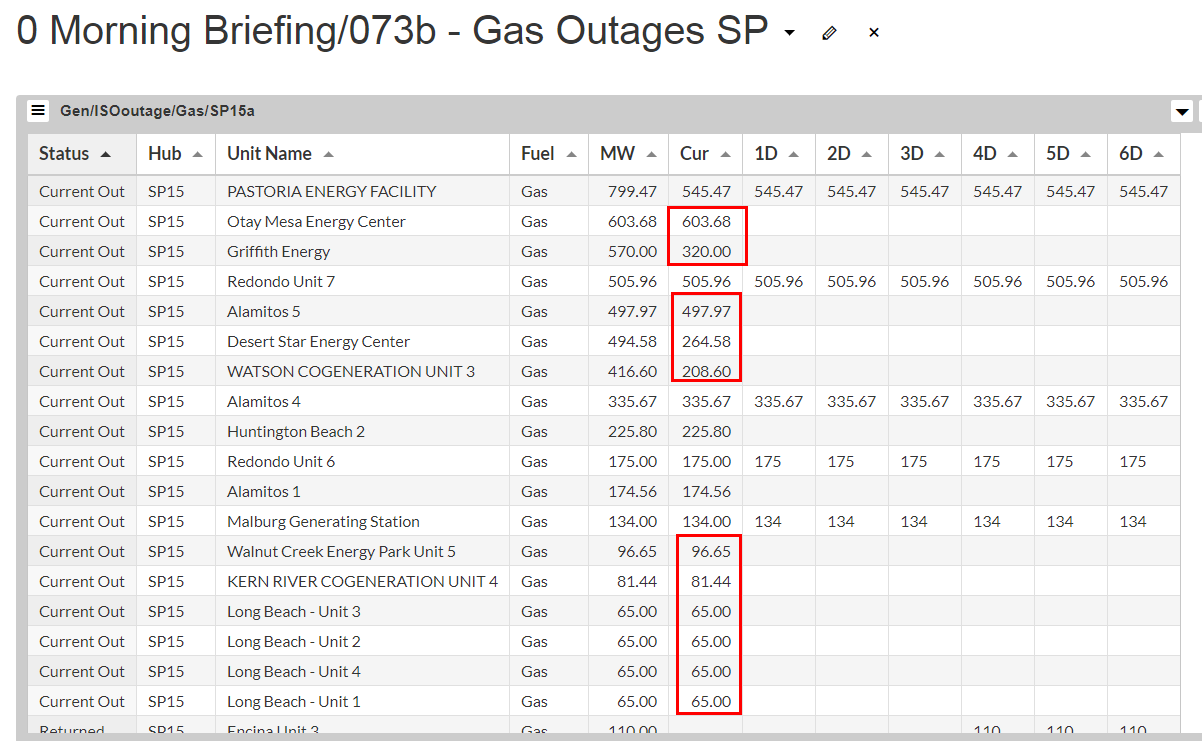 SP saw a slew of gas units come offline yesterday; these must be forced, it is too late in the season to be undergoing planned maintenance.

The precip outlook is dry, but who cares. All any of us care about is the snow on the mountains and when it’s going to melt. Let’s look to the river dashboards to see if it is starting: 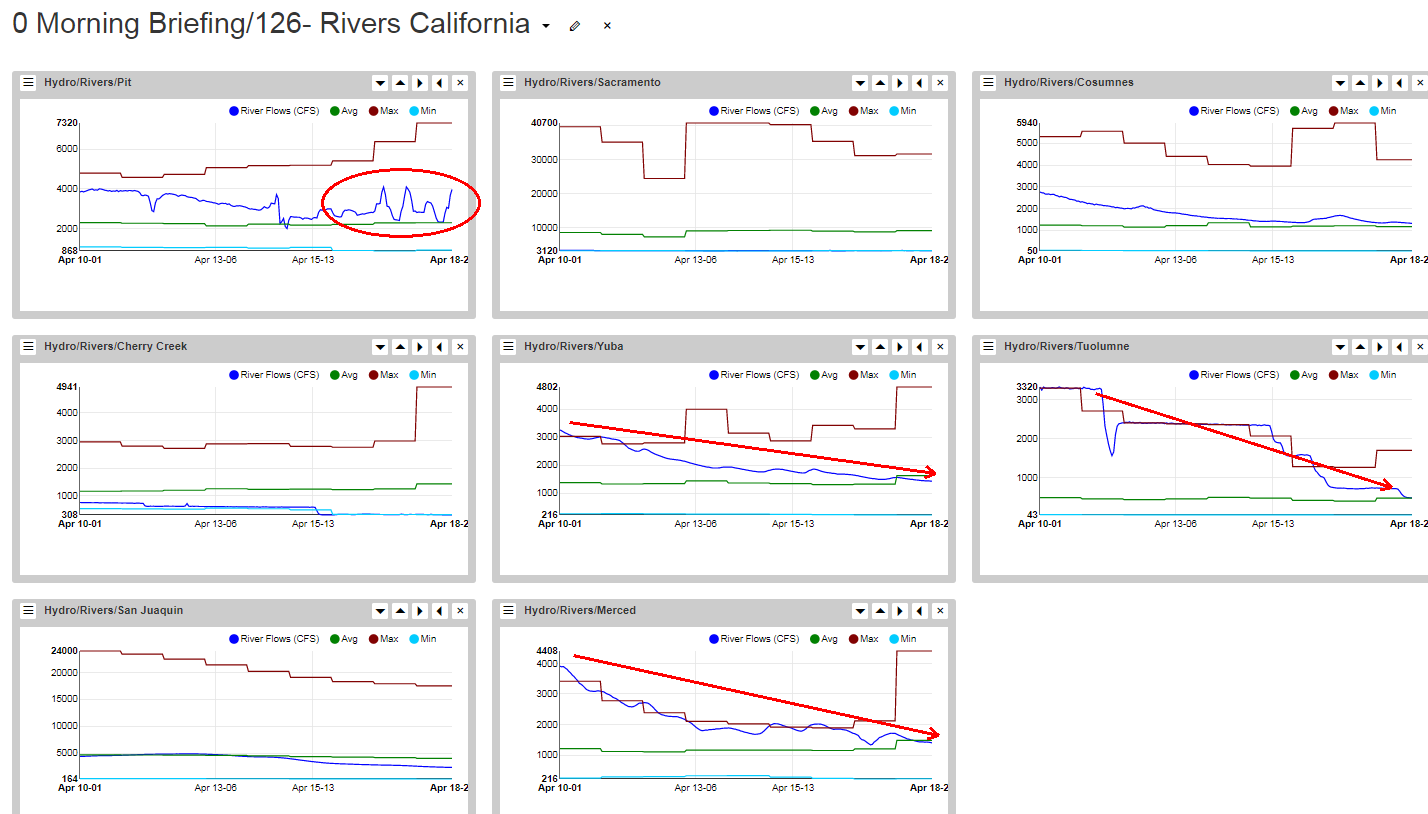 California – NO. But do take note of the Pit, that system of cascading power projects is beginning to aggressively shape its water. We see the result of that shaping in actual energy:

Note how peak energy is sideways (over last week) yet average and minimum are sharply down. As water tightens in California, the sys ops are aggressively using their storage to put the energy on the hours with the highest prices. That will change once the melt commences, but it hasn’t started yet, and there is plenty to melt, too.

WY 2018 isn’t WY2017, but it’s about twice the size of WY14-15. There is enough snow in the hills to take the Cal system to hydraulic capacity for several weeks, once it warms up, but even with this “heat event’ next week, temps don’t get hot enough to trigger the surge: 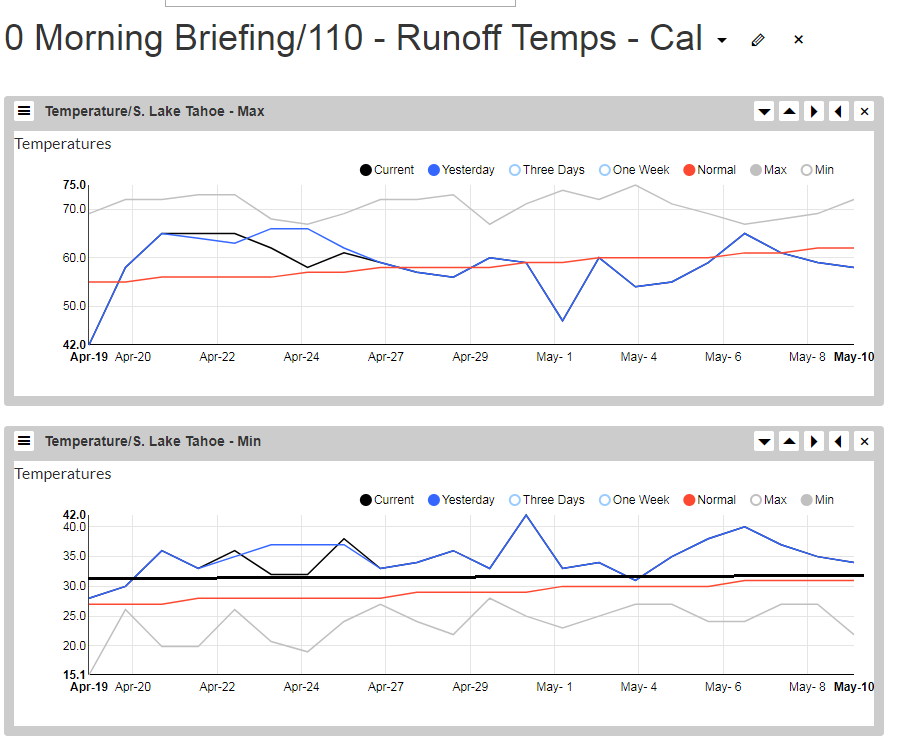 Nighttime lows are at freezing or above; we’d want to see lows in the 40s or 50s. 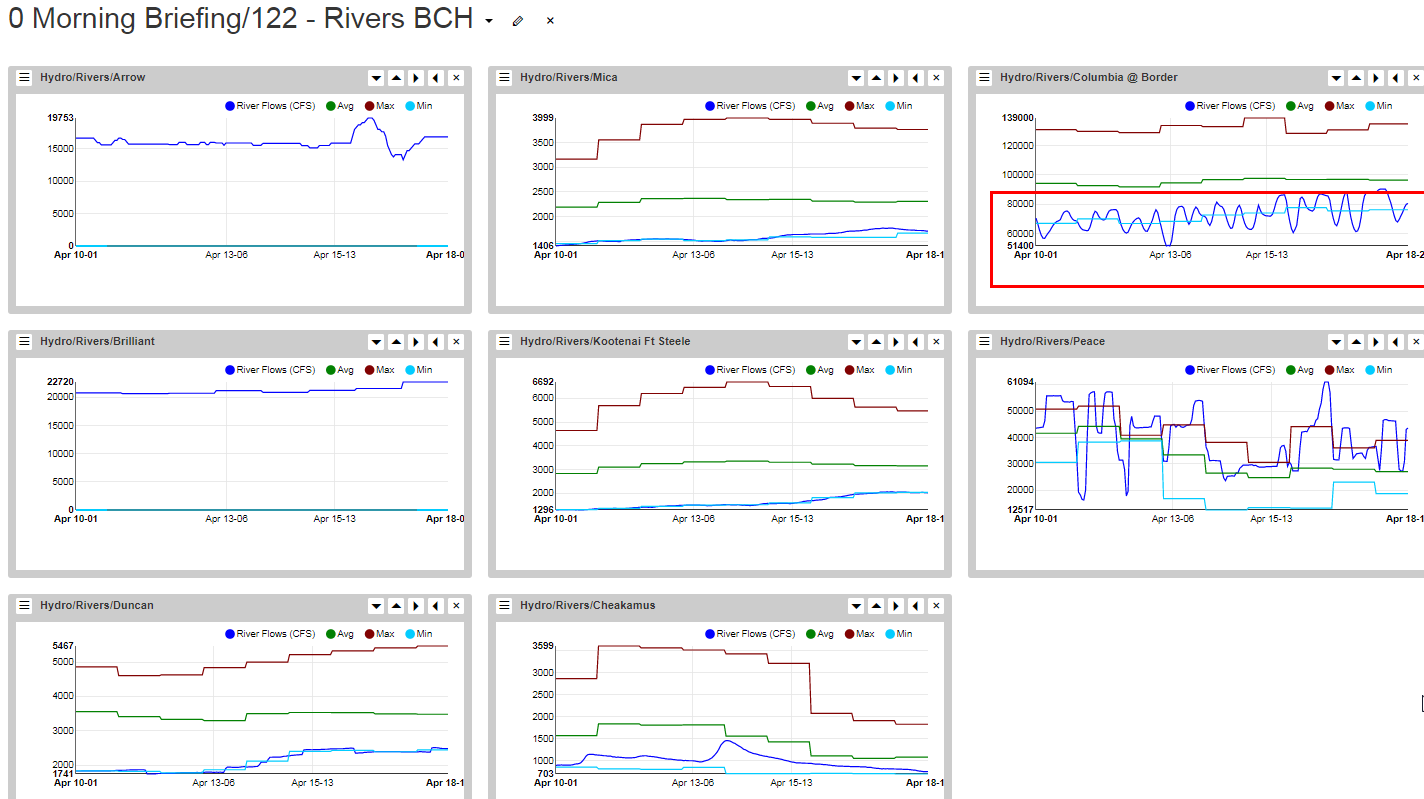 Water is tight in Canada, discharge at Arrow is less than 20kcfs which is why inflows at the USA border are near ten-year lows. 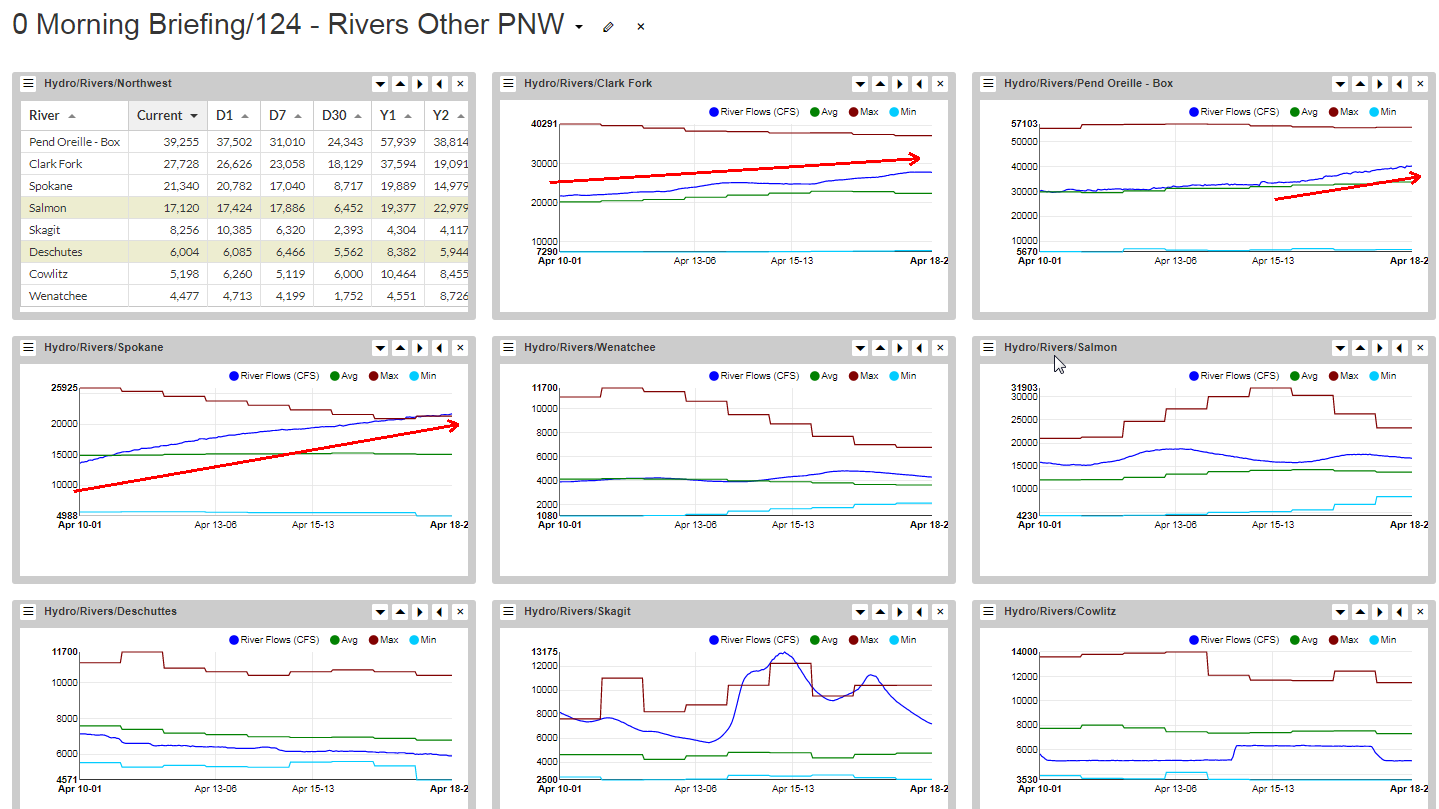 There are signs of runoff life, however, at the Spokane, Pend Oreille, and Clark Fork. All three are rallying, the Spokane is almost 30kcfs, about a double in two weeks. We see that trend extending for several more weeks; perhaps the river will set a record this year and approach 50kcfs. Remember, Arrow discharge is just 17kcfs, and the Spokane is 30kcfs. Once the Arrow gets going, it will quickly exceed 100kcfs which will probably happen while the Spokane is still 40-50kcfs and the Pend Oreille is 100kcfs. This is teeing up for shytstorm like we haven’t seen for a while, but not just yet.

Flows at Coulee are picking up:

Some of that is the Pend Oreille and Spokane, and the rest is the draft; now the pond is at 1232 and just ten feet to reach flood control targets. Average daily discharge hit 146kcfs yesterday, 23kcfs more than last week. 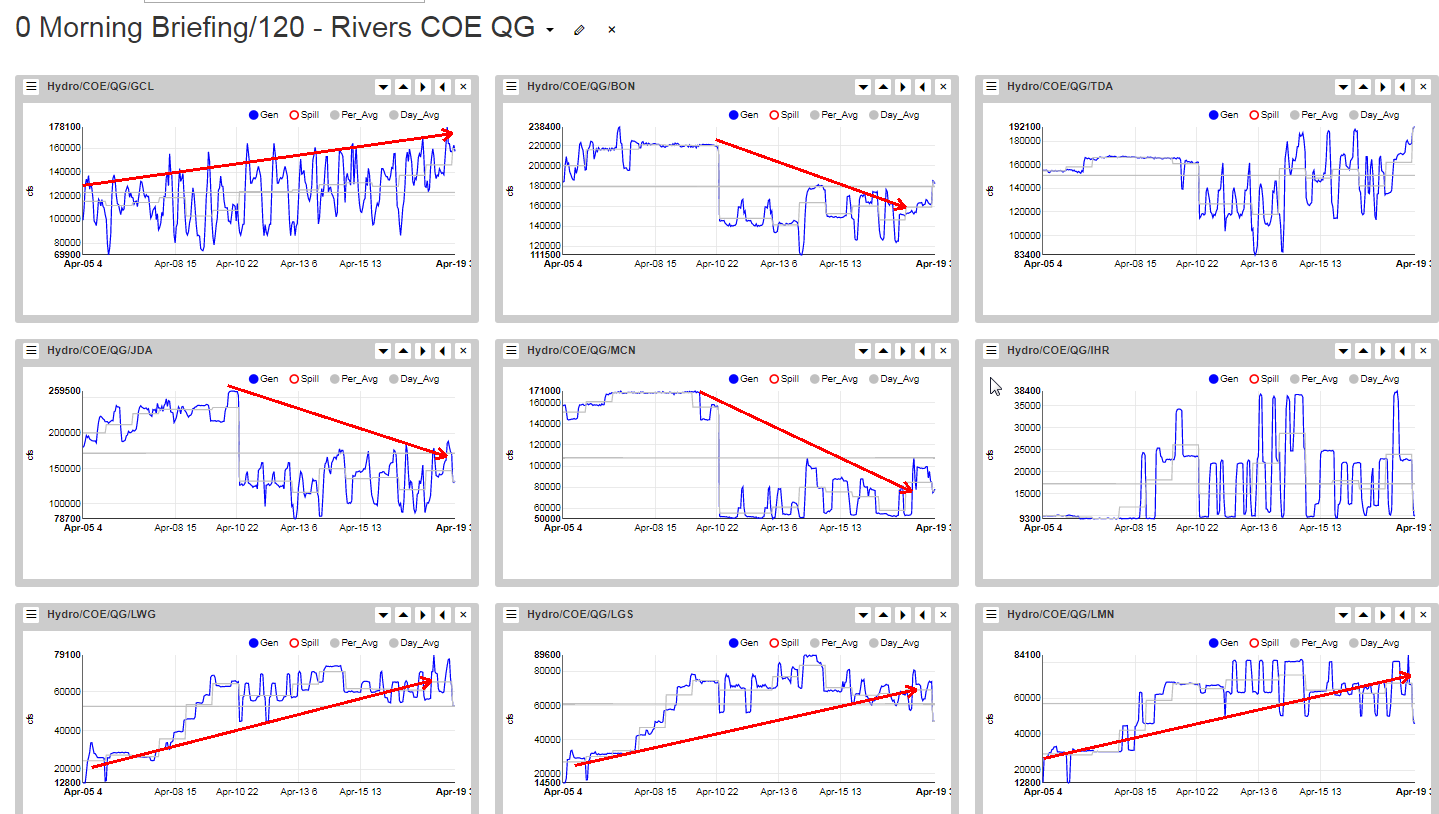 The regulated portions of the mainstems are a mixed bag; the Snake projects are up, and the lower Columbia is down, but that is because of Spill (this is a plot of water through the turbines, AKA QG). 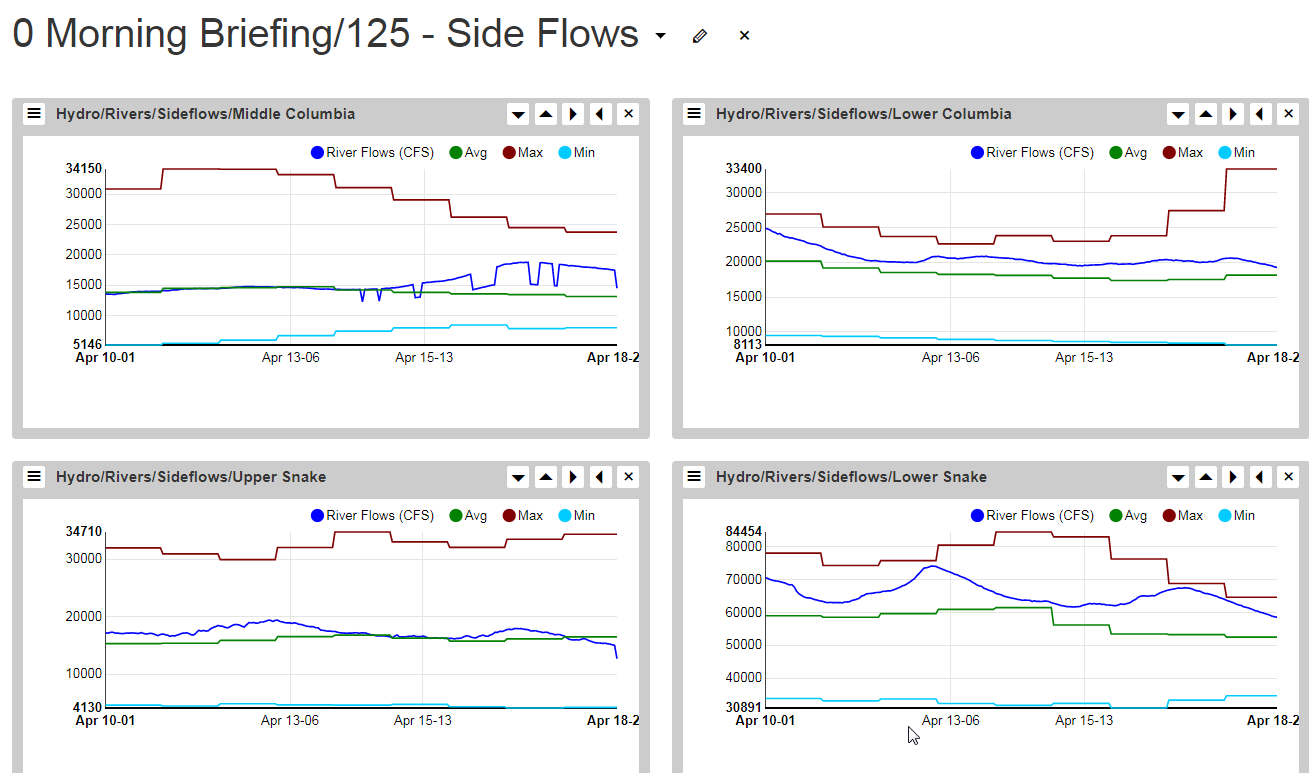 The Side Flow Indexes are handy for confirming runoff; none of these have moved, if anything, they are down. 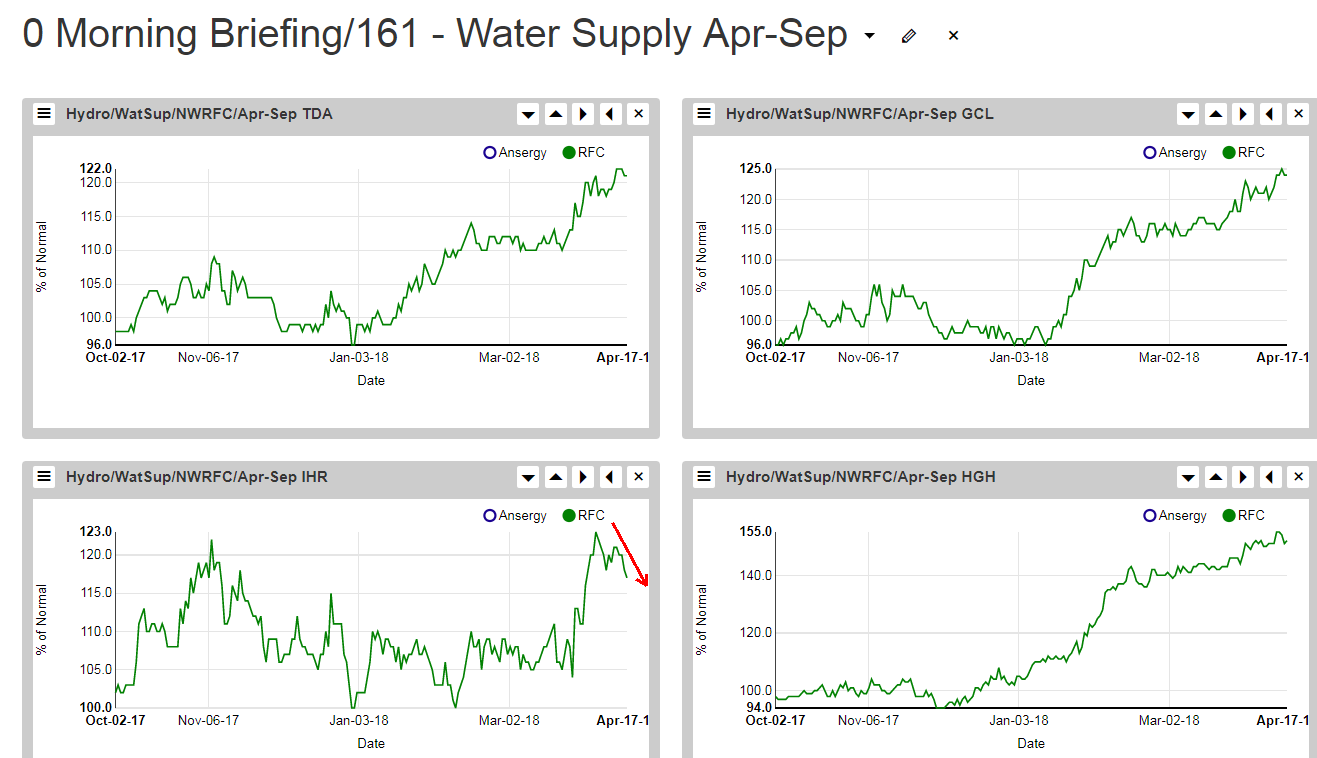 The Upper Columbia water supply forecasts are sideways while the Snake is coming off; we’d expect the Snake to continue to drop given warm and dry weather. 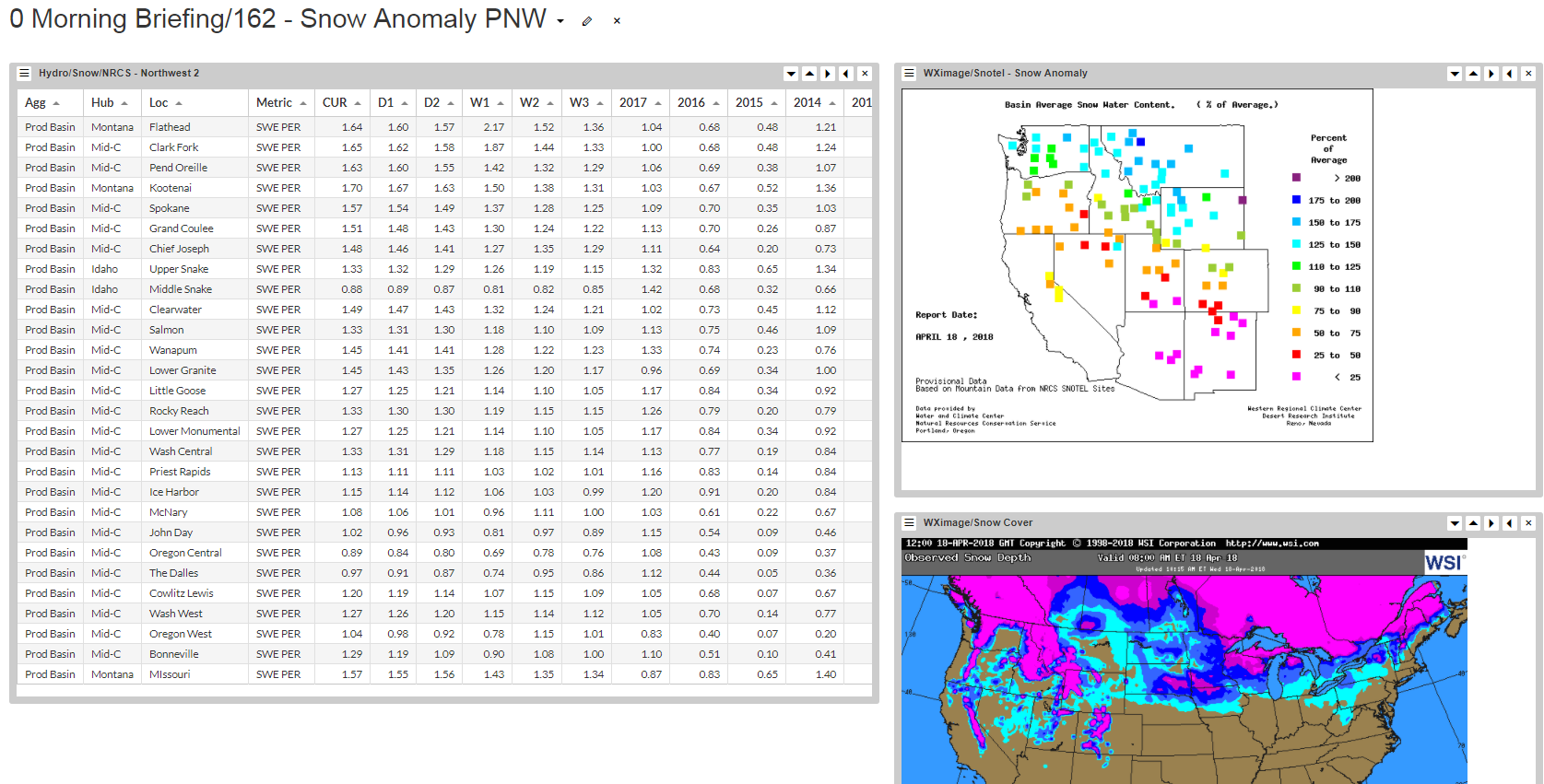 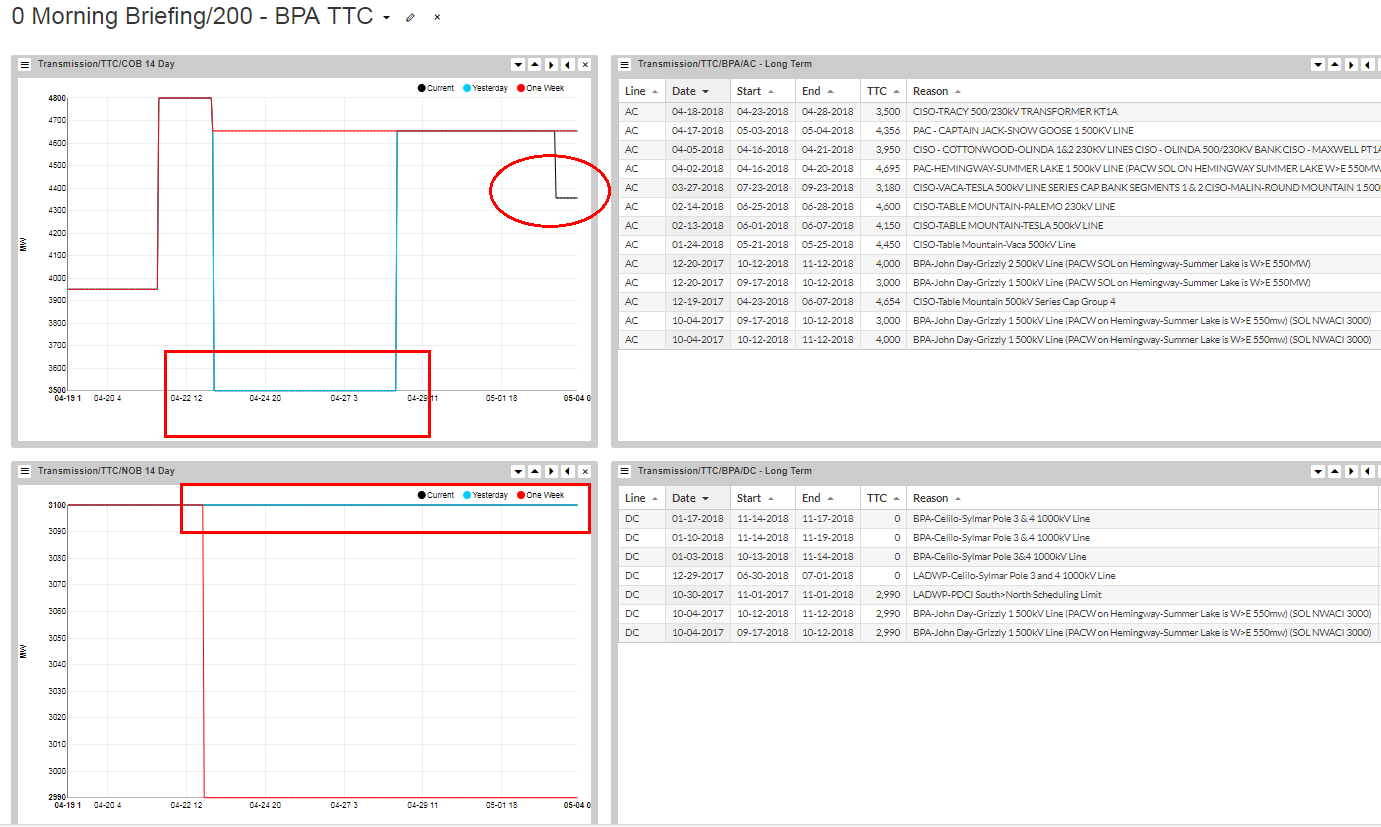 A few tweaks to short-term BPA TTC on the AC and DC, nothing remarkable.

Energy flowed into the Northwest for a few hours over the last couple of days, that is a first, something we haven’t seen in months. Palo exports are off, no surprise given its load spikes.

The southwest is growing more bullish off of warmer weather. The Northwest is a ticking time bomb waiting to explode, but it’s not quite warm enough for that to happen. The ISO gets teased with some warmish weather, but it’s not that warm.