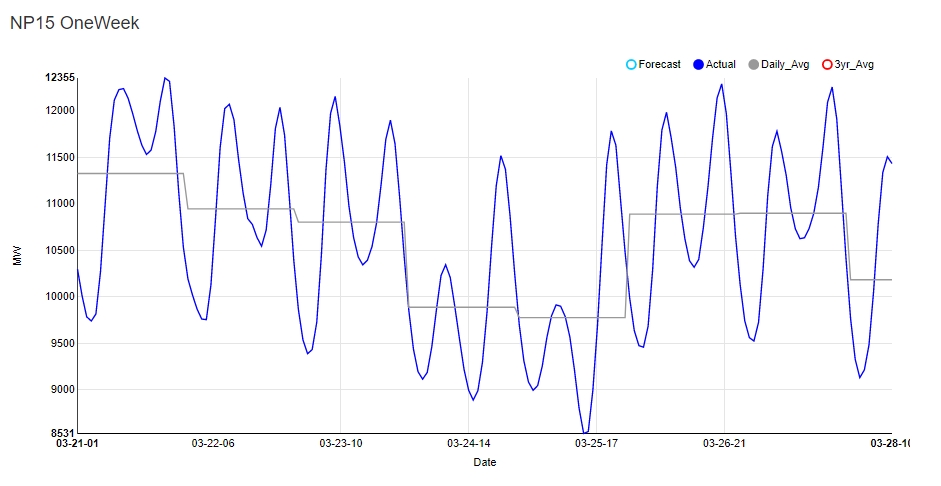 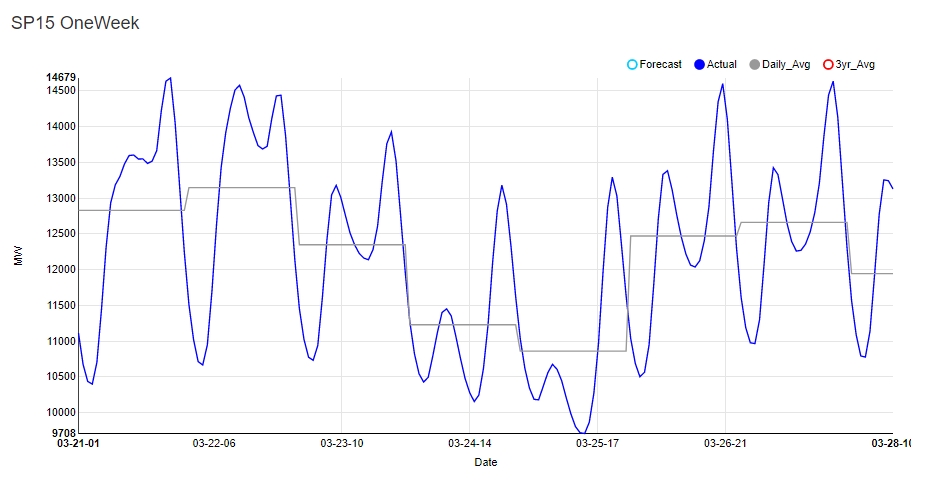 Peak demand increased 34 MW day-on-day, and average daily loads followed suit with a 190 MW increase of its own, largely thanks to higher demand in the off-peak hours.  Demand is down 160 MW week-on-week. 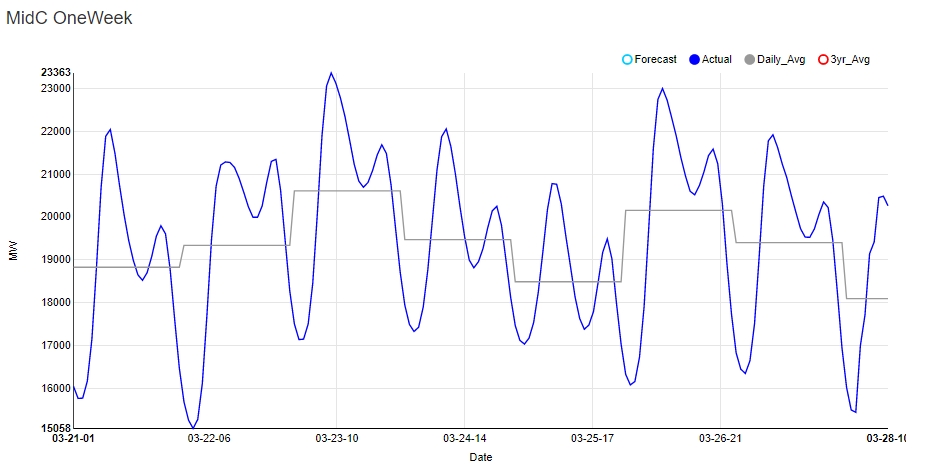 If you aren’t in Montana you should expect warmer than normal aggregate temps over the next ten days, and significantly so in most stations.  All four SP15 stations show anomalies greater than four degrees, while NP15 shifts even warmer as San Jose and Sacramento push north of six degrees.

New ten-year highs for San Jose from today through the 30th as temps are expected to top out at 81 on Friday, 14 degrees above normal.  Highs will make a slow decline from there but aren’t projected to fall below normal for at least ten days.

Sacramento won’t reach the 81 degree high that we see projected in San Jose, but high 70’s are still in order through the weekend, topping out at 79 on the 31st (12 degrees above normal).  March looks to finish well above normal while the beginning of April shows a significant bump over yesterday’s forecast as the 3rd increased seven degrees overnight.

There won’t be any 10-year highs set in the foreseeable future, but Burbank should be consistently 8+ degrees above normal through Saturday, with tomorrow’s high of 80 setting the peak.  The next week shows highs a couple degrees warmer than projected yesterday.

Much less excitement in the Northwest where Seattle is mired with mid to low-50’s for the next couple weeks, aside from a single day of 61 on the 5th.  So where did the above-average daily aggregate forecast come from?

The mins, of course!  Seattle projects lows consistently above normal, and considerably above yesterday’s forecast through the weekend.

Portland’s lows are much warmer than Seattle’s as next week could see a bottom of just 50, 11 degrees above normal.  In terms of daily highs, there are four days projected to reach 60 over the next ten days, with just one expected to approach 65 (31st).

We’re keeping an eye out for a 70-degree day in the Inland Northwest, anything to kick the runoff into gear, but the forecast isn’t giving any hints of that in the near-future.  There aren’t even 60-degree days projected until well into April.

Denver’s highs will rise from 49 today (a five-degree decrease from yesterday’s forecast) to low-70’s by the beginning of next week.  The weekend through the 5th all mark considerable increases from yesterday’s projections, especially the 5th with a 12 degree bump.

Salt Lake City begins a steep increase in daily highs after today’s 57, leading to nearly six-straight days of 70+ highs, topping out at 73 on the 3rd, 16 degrees above normal.  Temps may fall off the shelf beginning on the 4th, but it’s far enough out to not write it in stone. 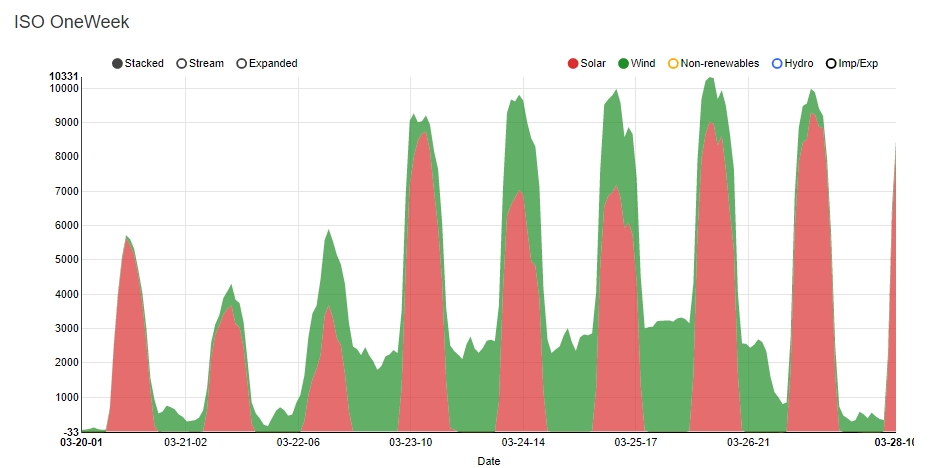 Mid-C has seen consistent wind generation for the past two days, never dropping below 1,700 in a single hourly-aggregate.  Generation ramped up this morning, topping out at 3,300 MW.

The Northwest hubs are holding on tight to their above-average snow years as all three sit comfortably above normal, especially Montana with more than 5″ in snow anomaly.  NP made up solid ground over the past two weeks with an additional 3″ but remains 4″ short of average and less than half of what we saw last year.

With nary a glimpse of 70-degree days in sight, Mid-C will have an opportunity to quickly climb above most of the years in the chart over the next couple weeks as many peaked around the end of March. 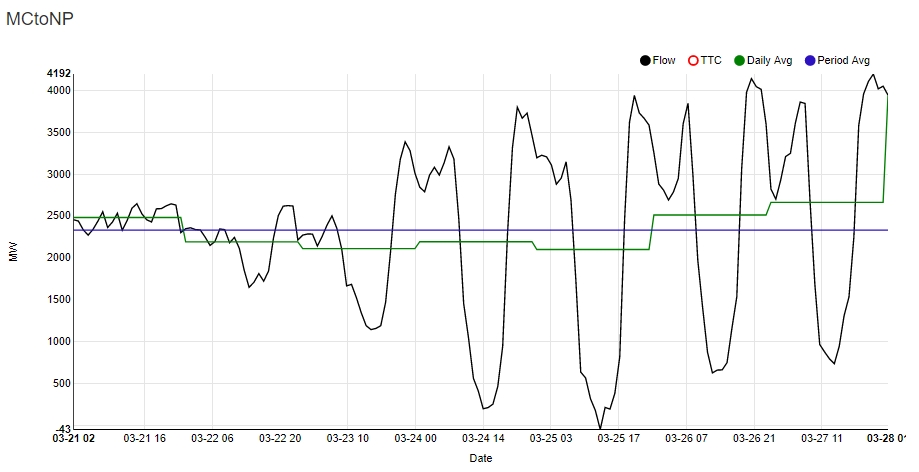 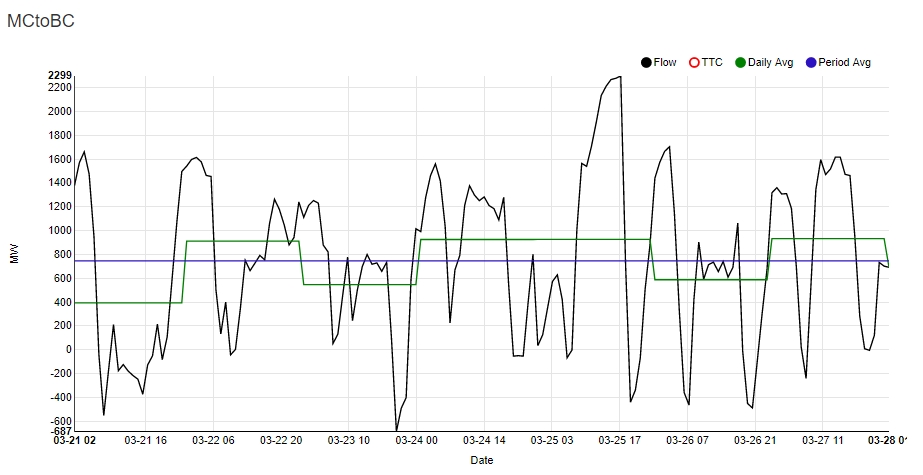 Daily averages show consistent flow into BC as each of the past seven days balanced above 0 MW.  There are still at least a couple hours each day that show power flowing south from BC, but even those hours are climbing closer to neutral.