Admin Note: I will be getting a “Total Knee” replacement next Tuesday and most likely will be in the hospital that night. Next Thursday’s blog is a bit unlikely; I’d say the odds of me posting a blog next Thursday, at least one that is coherent, is about the same as the Donald making the Stormy his Chief of Staff.

It seems the DA clears realized a paradigm shift to the bearish side of the paradigm. Maybe it’s gas …

Nothing like a healthy dose of high 70s to cure the fear and loathing of Socal Citygate – now it is trading under PG&E Citygate. Also worthy of note, all hubs, aside from Scary Citygate are up, off of that sharp Nymex rally: 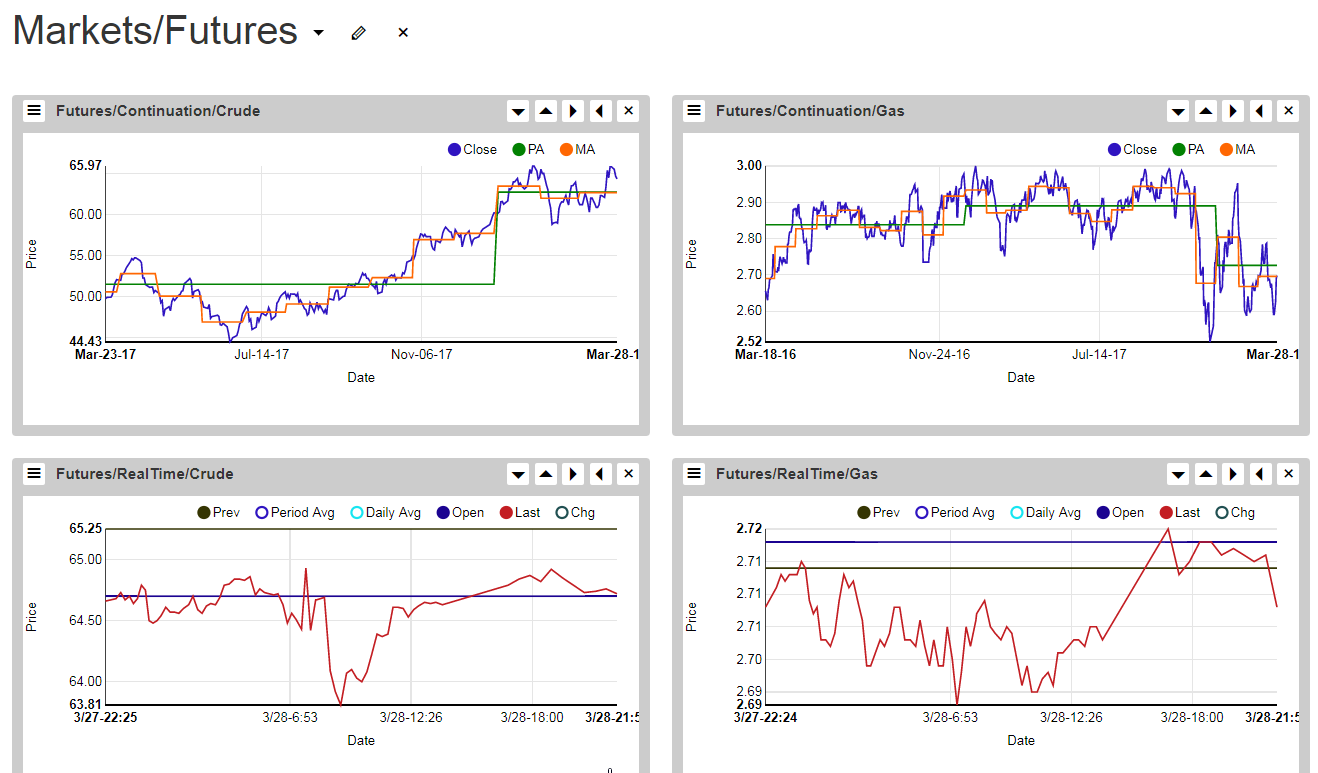 Both crude and natty enjoyed rallies this week, the latter off a swing to cold in the east: 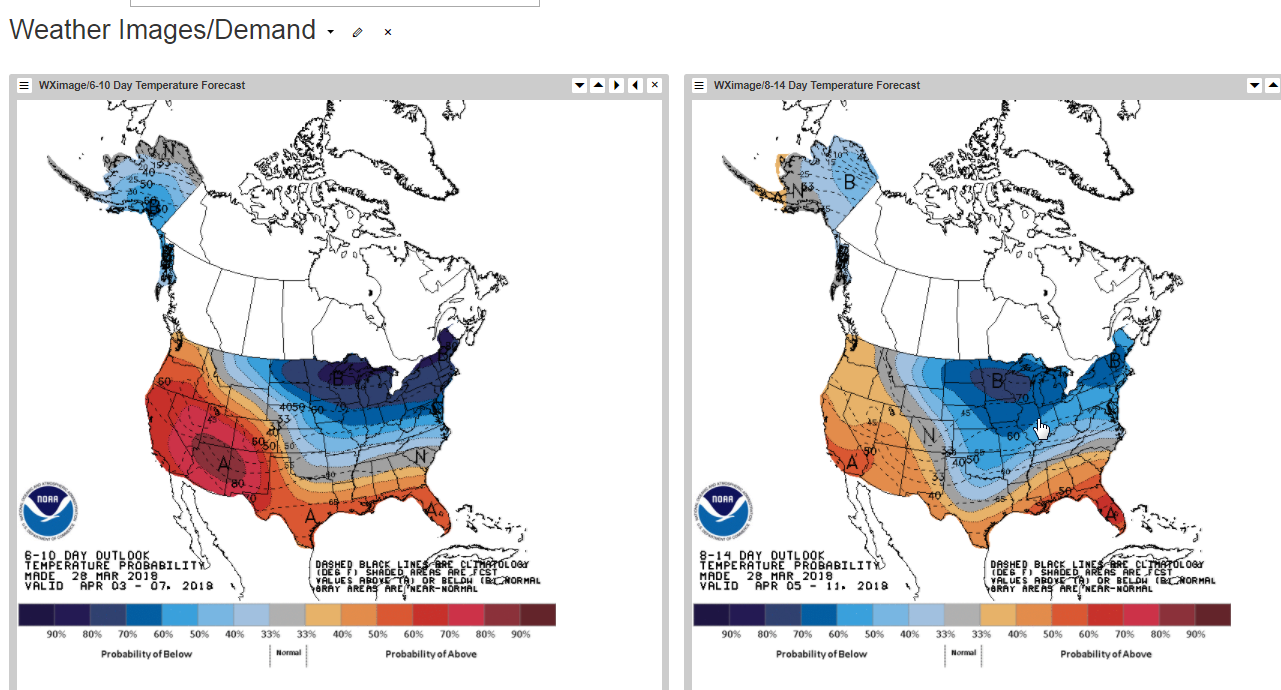 The continental USA is like a teeter-totter; cold west, warm east; cold northeast, hot southwest. Such is the case today, the southwest, per NOAA, is poised to bake, so is all of Kally, if you believe the picture. 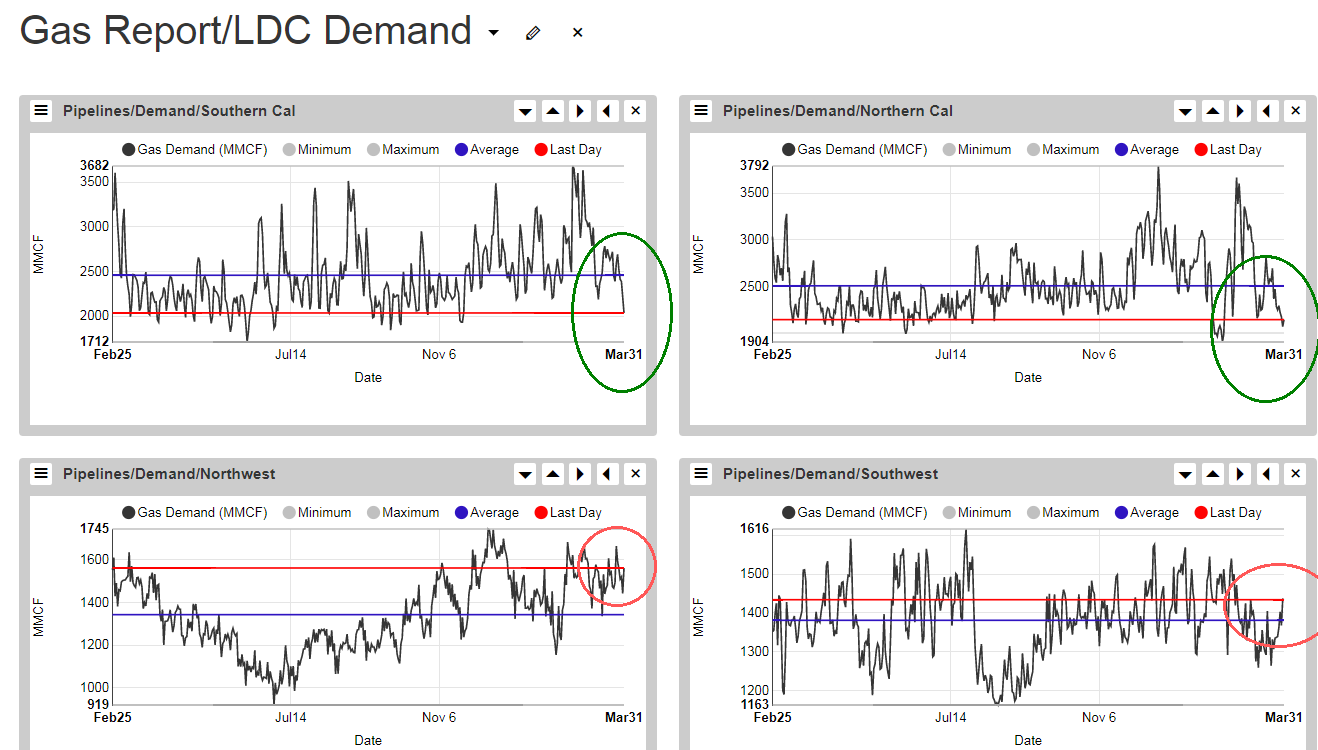 Warm weather destroyed Cal’s core gas demand, but not the outside points; they are sideways to up.

Both PG&E and SCG enjoyed builds, the significant threats of “running out of gas” in LA is over. 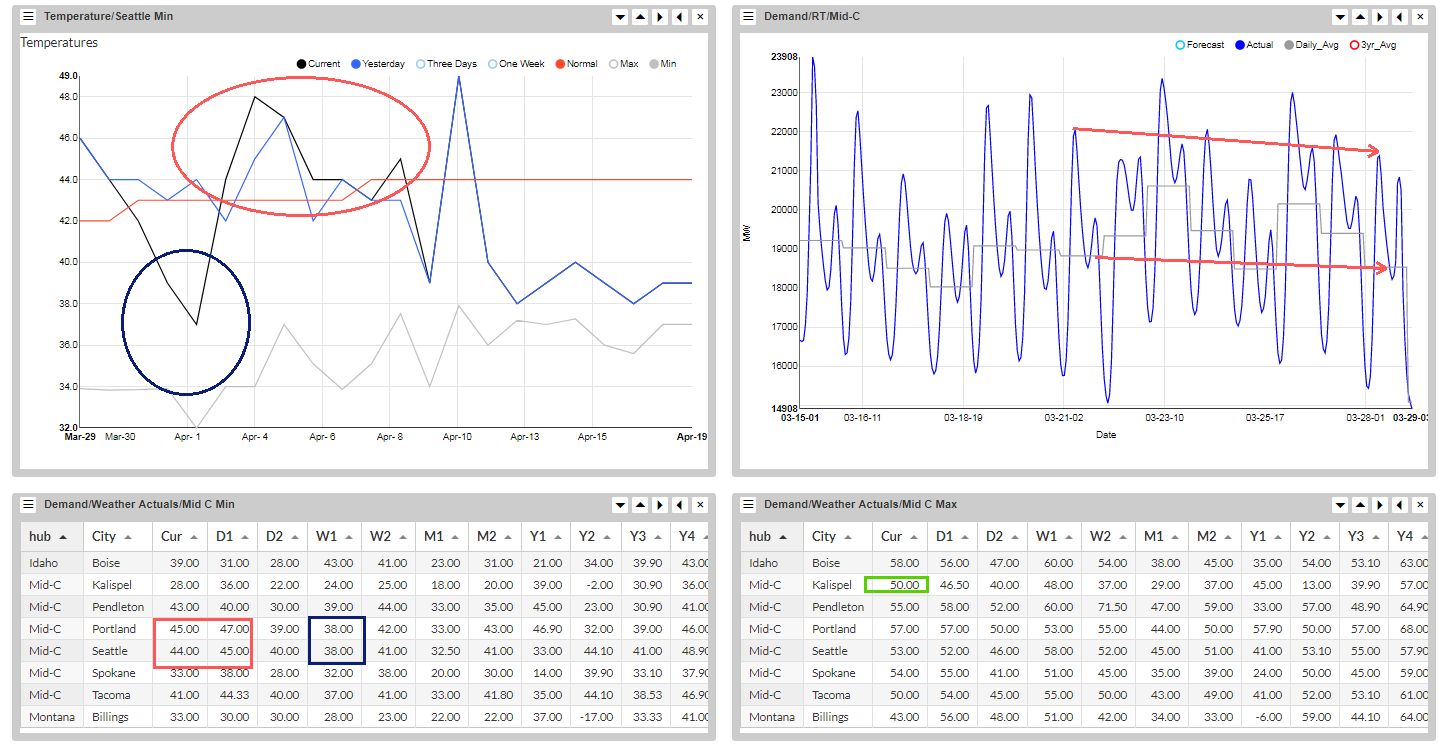 The Northwest will see some cold weather over the weekend, then next week a string of days at, or just above, average. Loads at Mid-C are gently down. 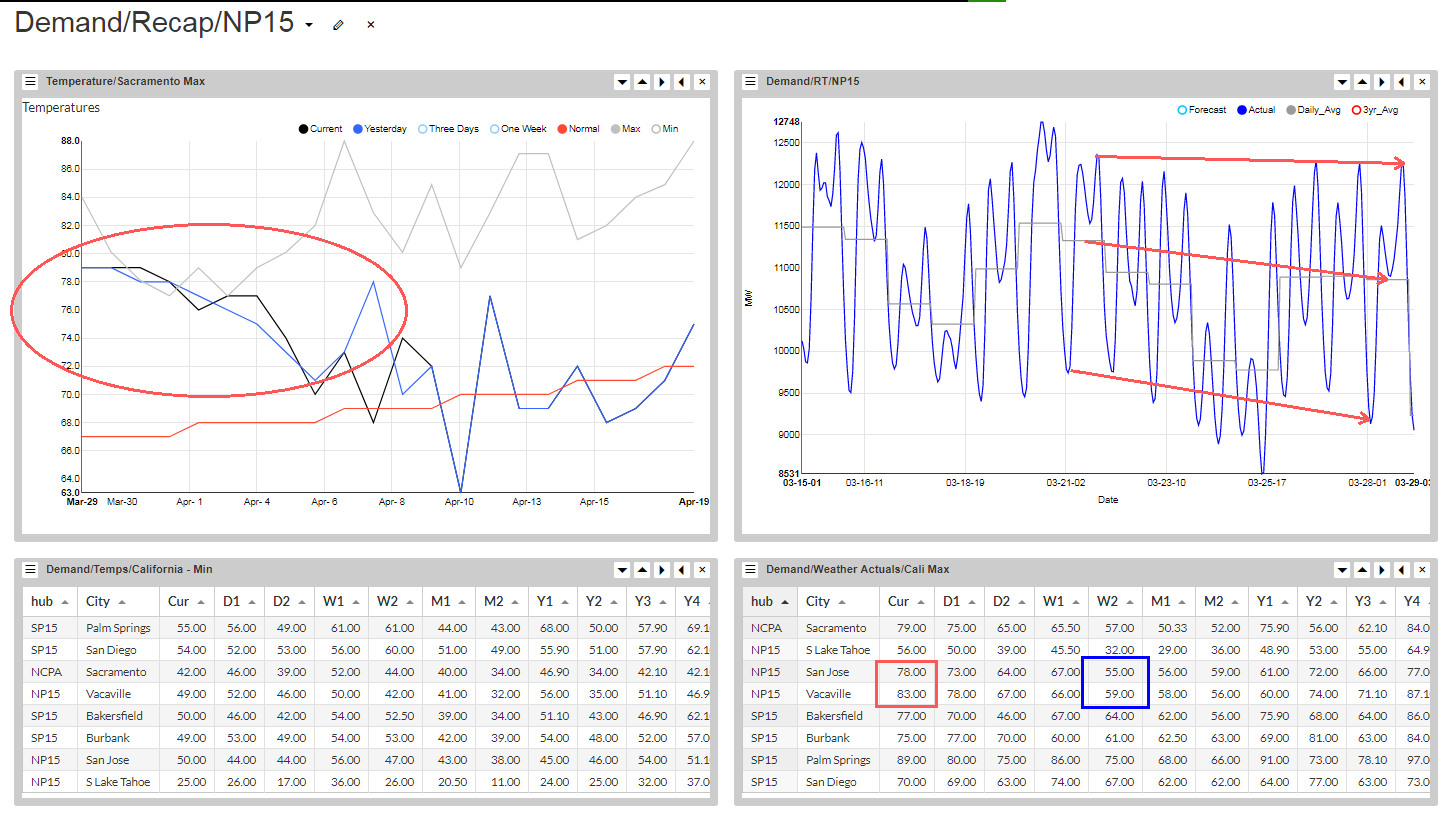 The northern portion of Cal saw temps in the 70s, all of the next ten days will see above average, but alas, loads are off. The 70s are demand’s Krypton. 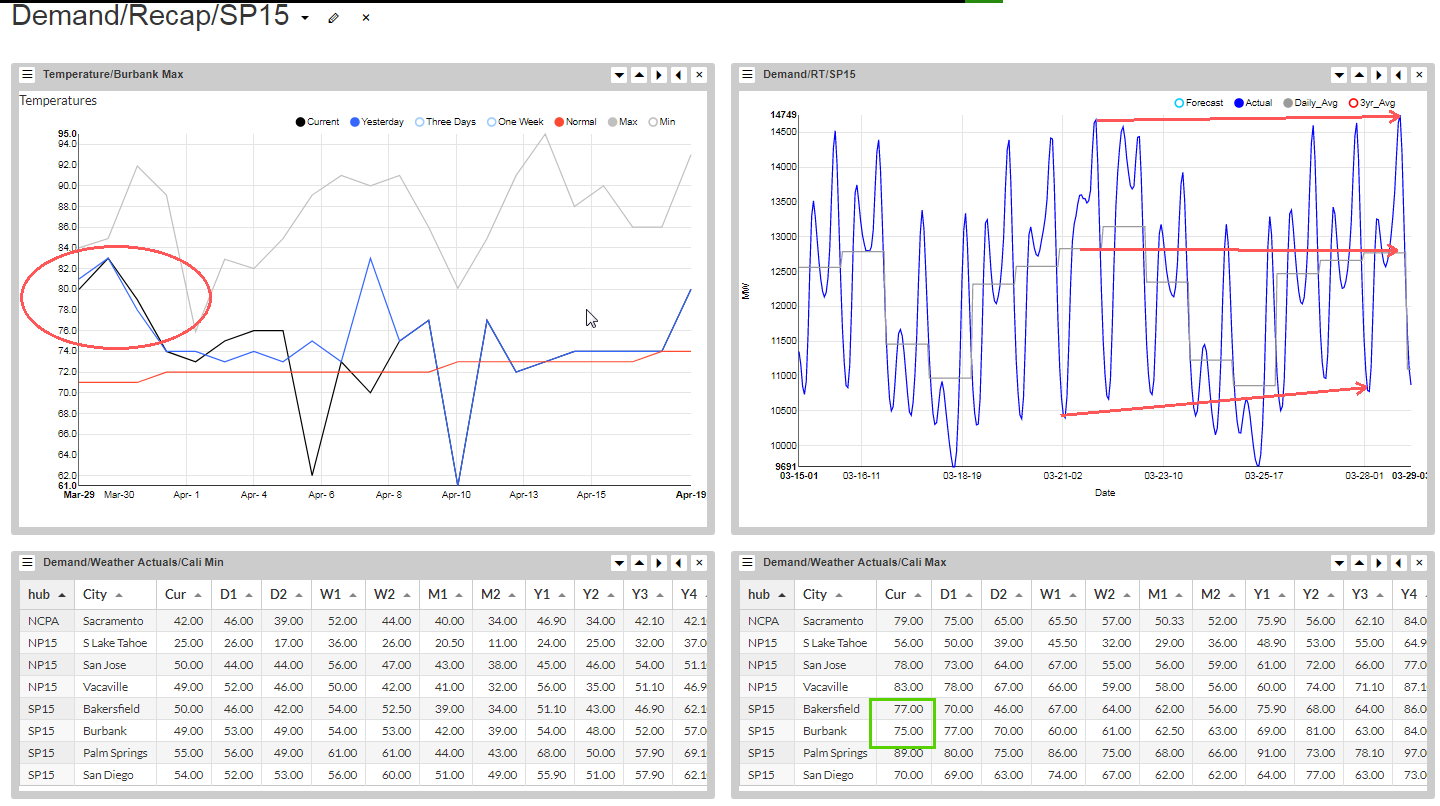 You’d think the high 70s in San Jose would mean high 80s in LA, think again; it just means high 70s in LA. At least loads didn’t move; they are so low they can’t get any lower. This temperature forecast does not correlate to NOAA’s pretty picture, the anomalies barely register. Someone’s lying. 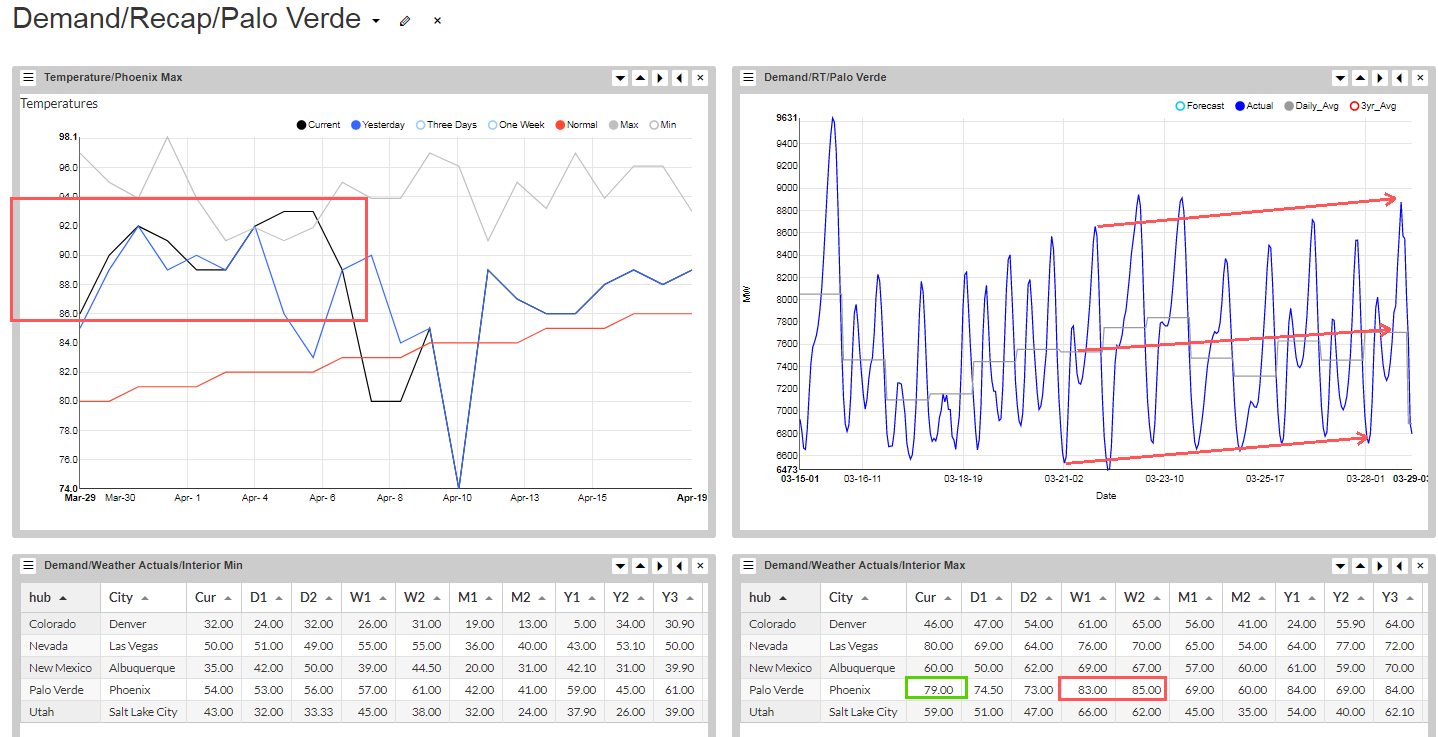 Phoenix, on the other hand, is hot; its anomalies are 10-15 degrees for the next ten days, and the hub’s loads are up. Check out those climo climbs; in a few weeks, we’ll see the first triple digits. Maybe that is why the spread is blowing out? 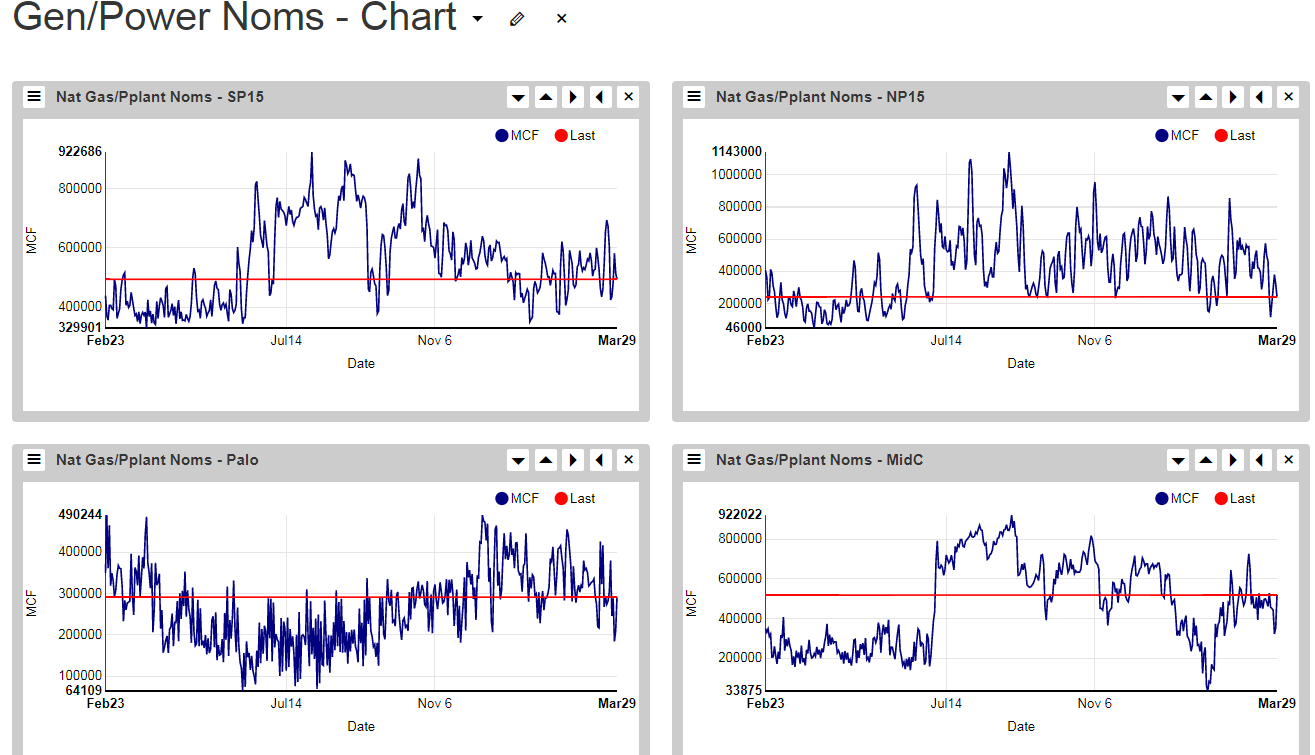 Mostly sideways everywhere; the Northwest has the most to lose, but cool anomalies will keep gas deep on the margin. NP is close to its seasonal lows, so is SP. 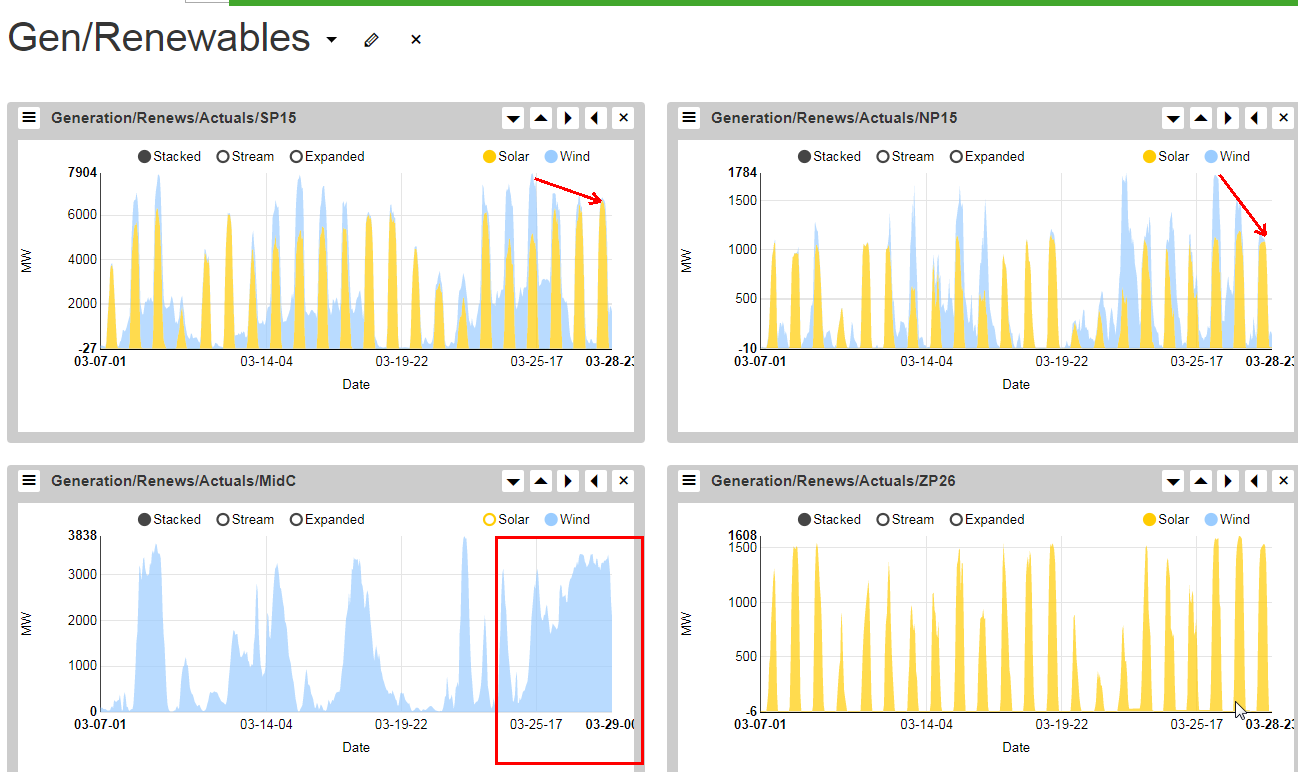 The Northwest got slammed by big wind every hour. The ISO didn’t, nary a turbine blade turned, but solar was there to soak up the slack. 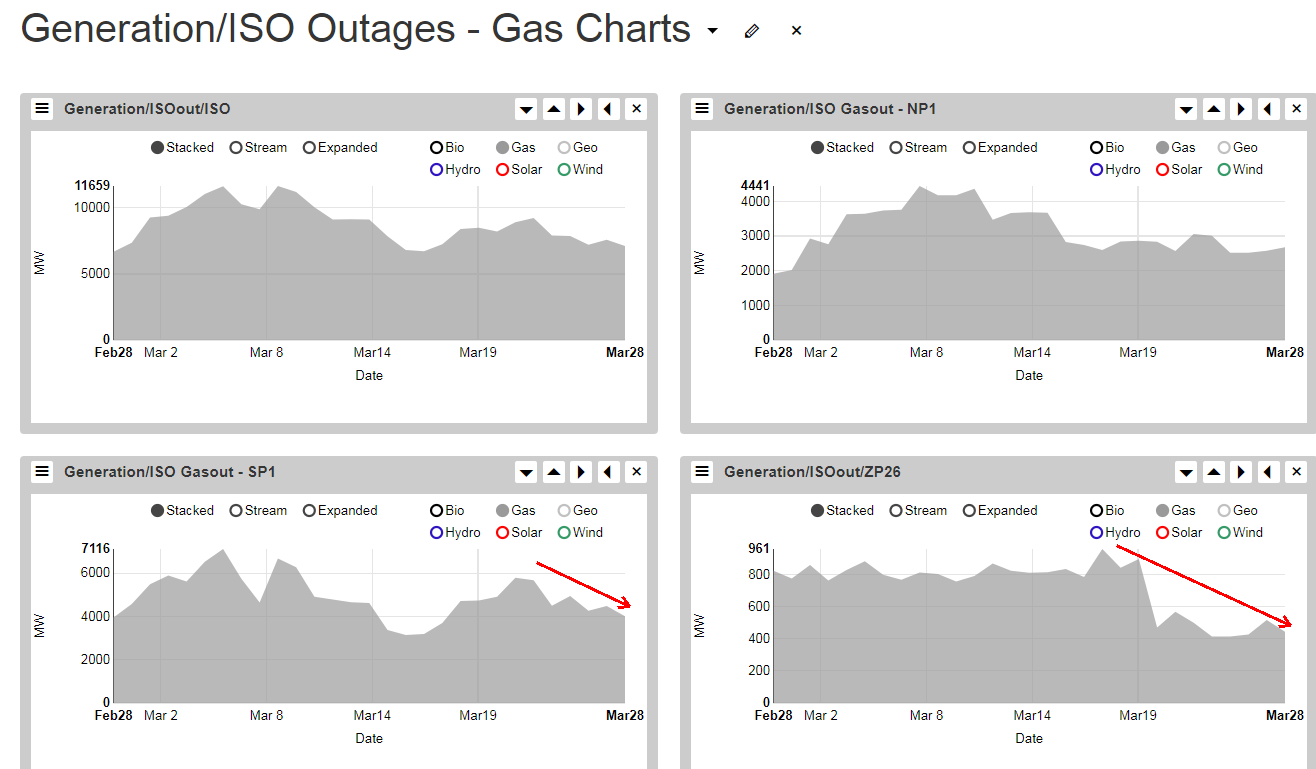 As April approaches, the outage season departs. SP and zp’s are slip sliding away. 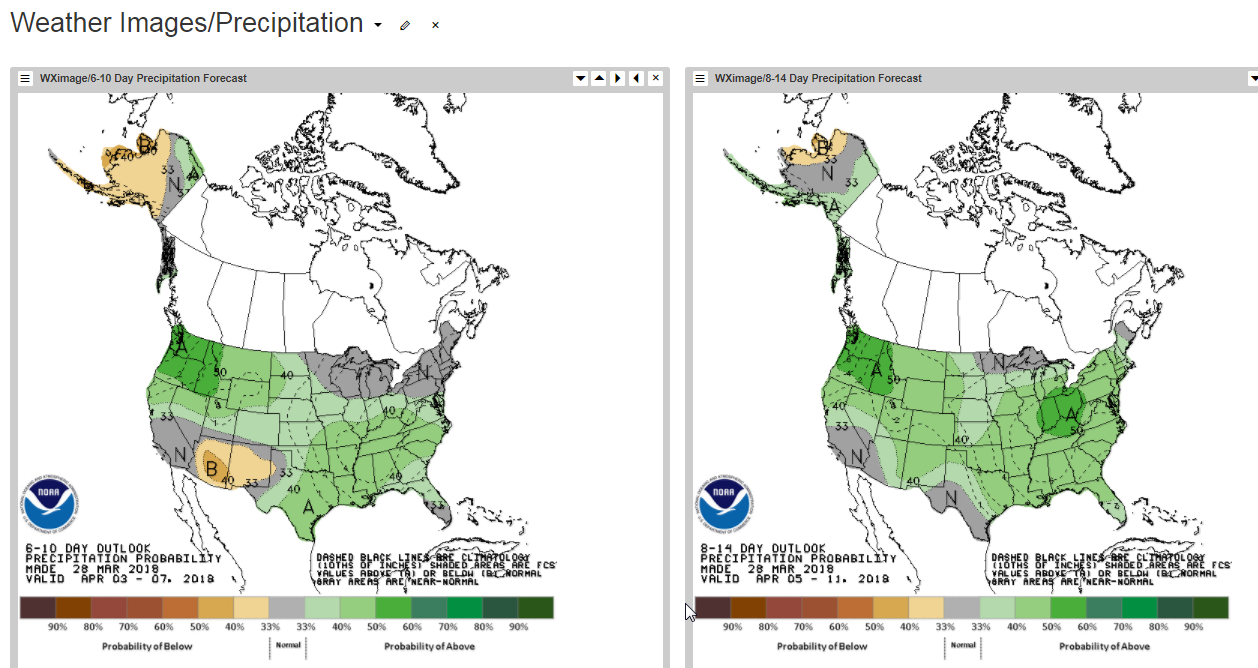 NOAA says the Northwest will receive above normal precip, the station level forecasts kind of support that:

We’d call it “normal,” not above, but that is a significant change from recent forecasts. With Kally swinging dry perhaps a weather pattern shift is afoot. Could the Northwest go wet/warm? That is the long’s biggest fear, but we don’t see it just yet:

This dashboard is our tripwire; when the positive anomalies rally, we’d be looking to sell. Don’t see those, so still comfortable, fundamentally, with length – of course, comfort is relative to price, more on that in the next post. These coolish days, coupled with average precip, will drive big builds in the SWE anomalies – bearish June and July.

Coulee had a regime change; BPA filled the last couple of days, but to do so they had to cut discharge. Some of that is explained by the massive wind energy, BPA had to find a home for all those renewable MWH so cut flows which caused the pond to fill. Call that bearish for April. 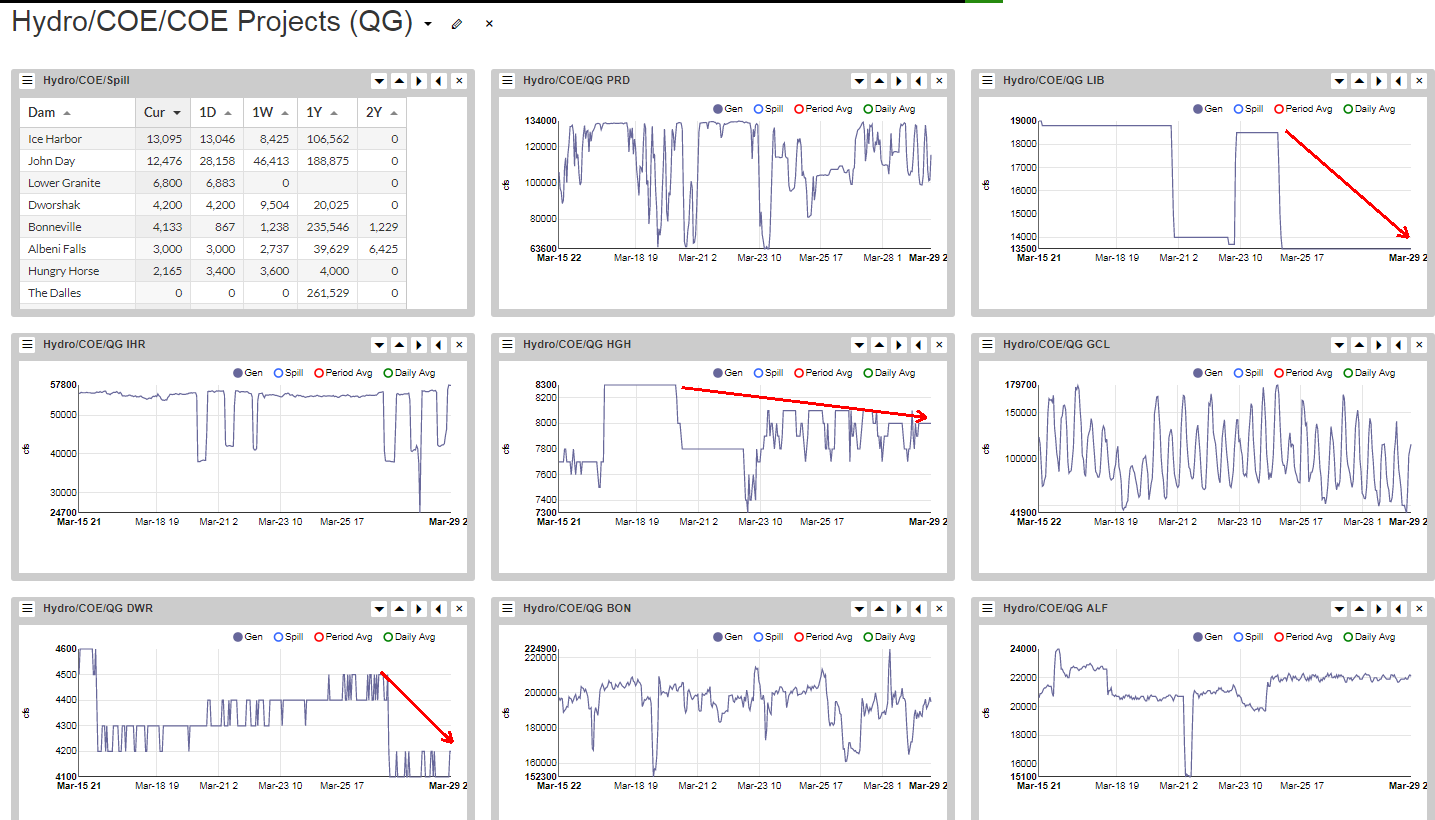 Aside from those regulated changes at Coulee, not much else is going on the Corps projects. 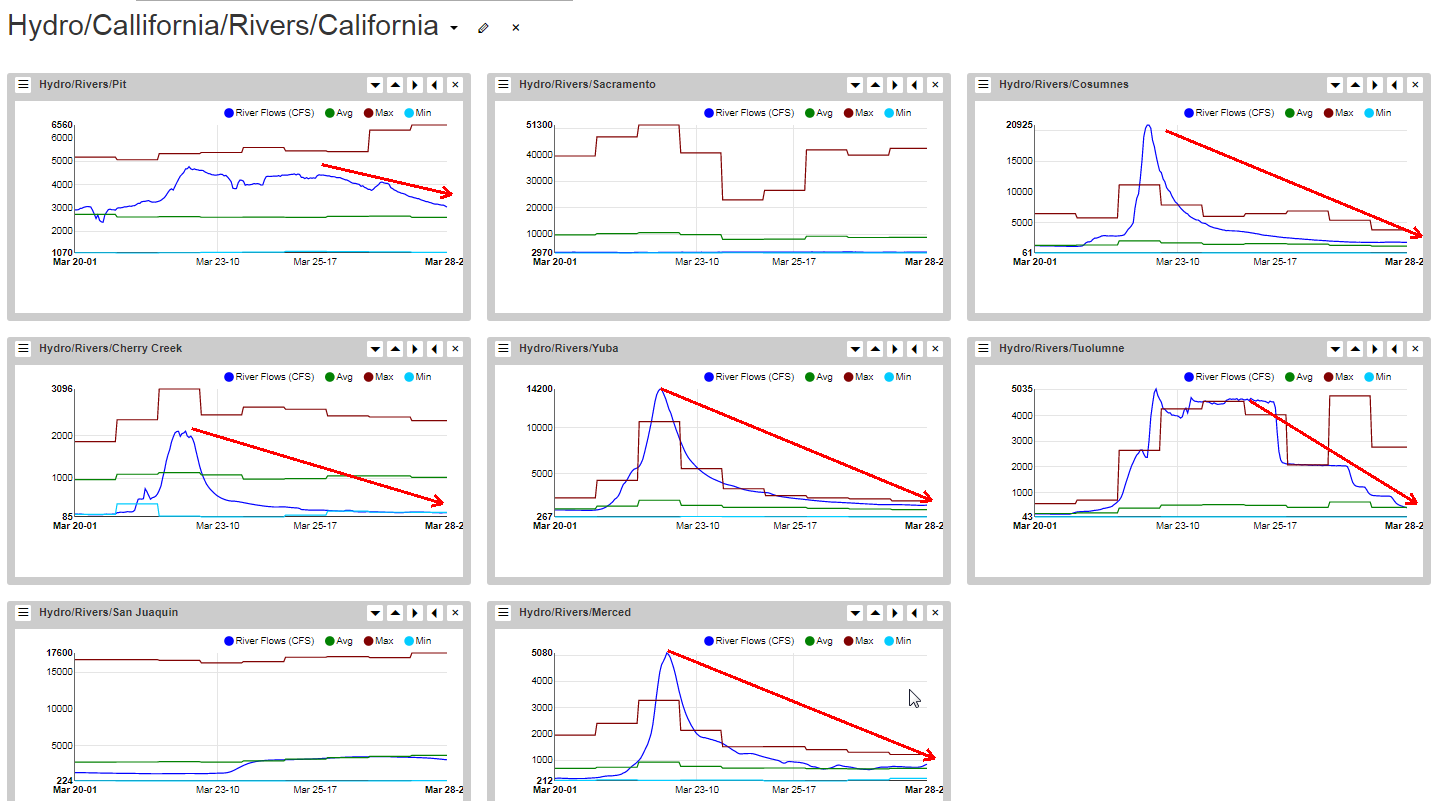 Not so in Kal, all the stations are down following the “big” rains, though energy hasn’t taken as big a hit: 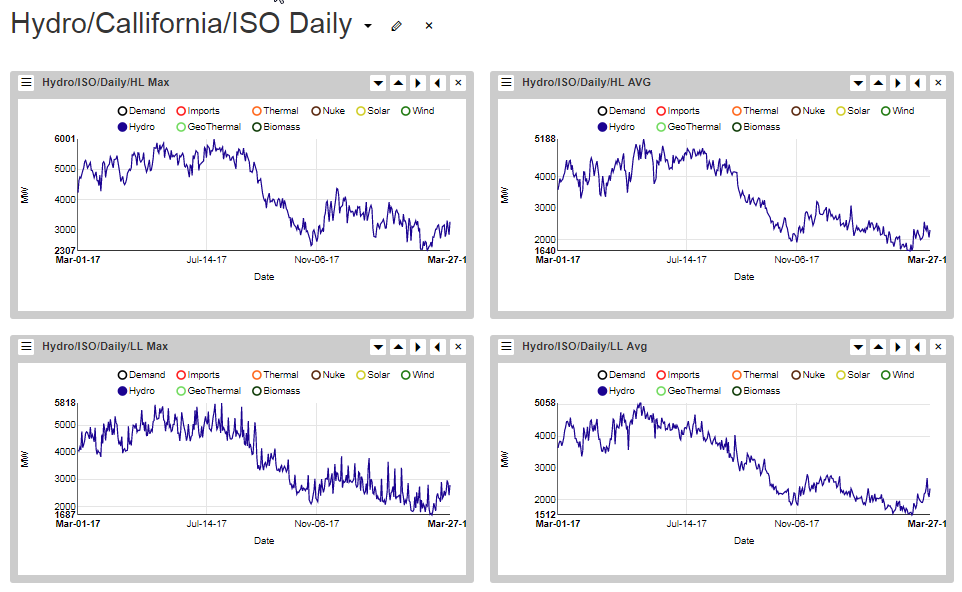 BPA must have fed the NWRFC some new regulations as its ten-day went nuts yesterday: 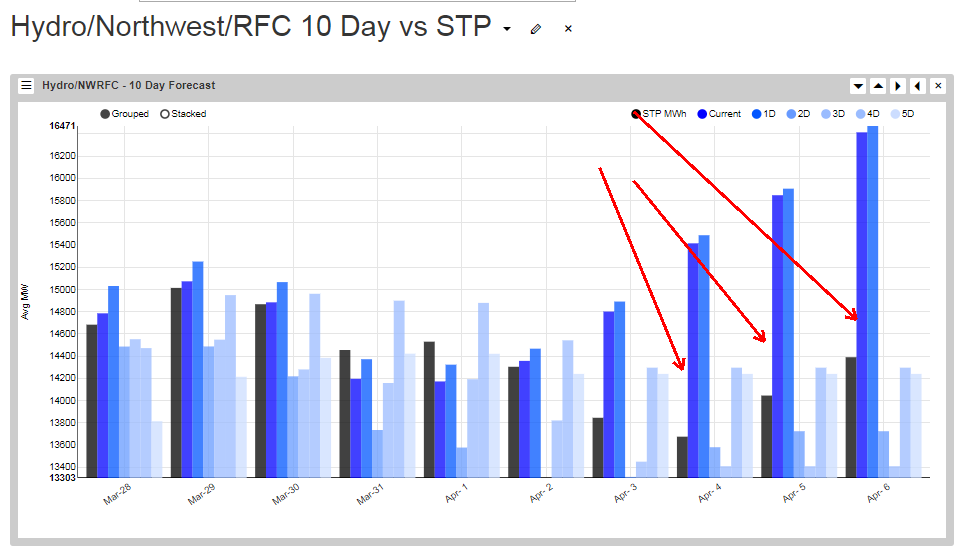 Massive rallies, relative to Monday’s STP. Not sure what’s driving those, it isn’t melt, too cold to kick off the freshet. Could be the new trend where the water isn’t added in the STP, just in the 10 day. if true, bearish for the new BOM.

Sometimes its a good thing to step back and look at a “big picture”; that is what this dashboard is, a big picture of reservoirs across the WECC. Cal is near its 10 year high, BC and NW are near lows. 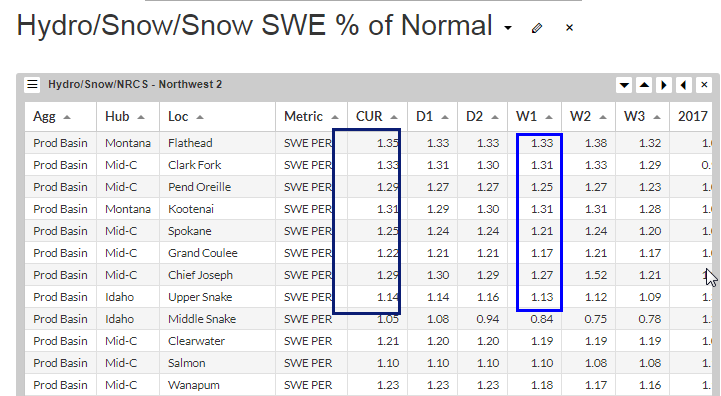 The SWE anomalies actually saw builds, week-on-week. These could see big builds next week off of cold and wet.

NWRFC’s water supply anomalies are holding steady, about the same numbers as the March flood control; that suggests no big changes in the draft which will be released a week from next. But, if our suspicions about big builds plays out, maybe the draft goes deeper? 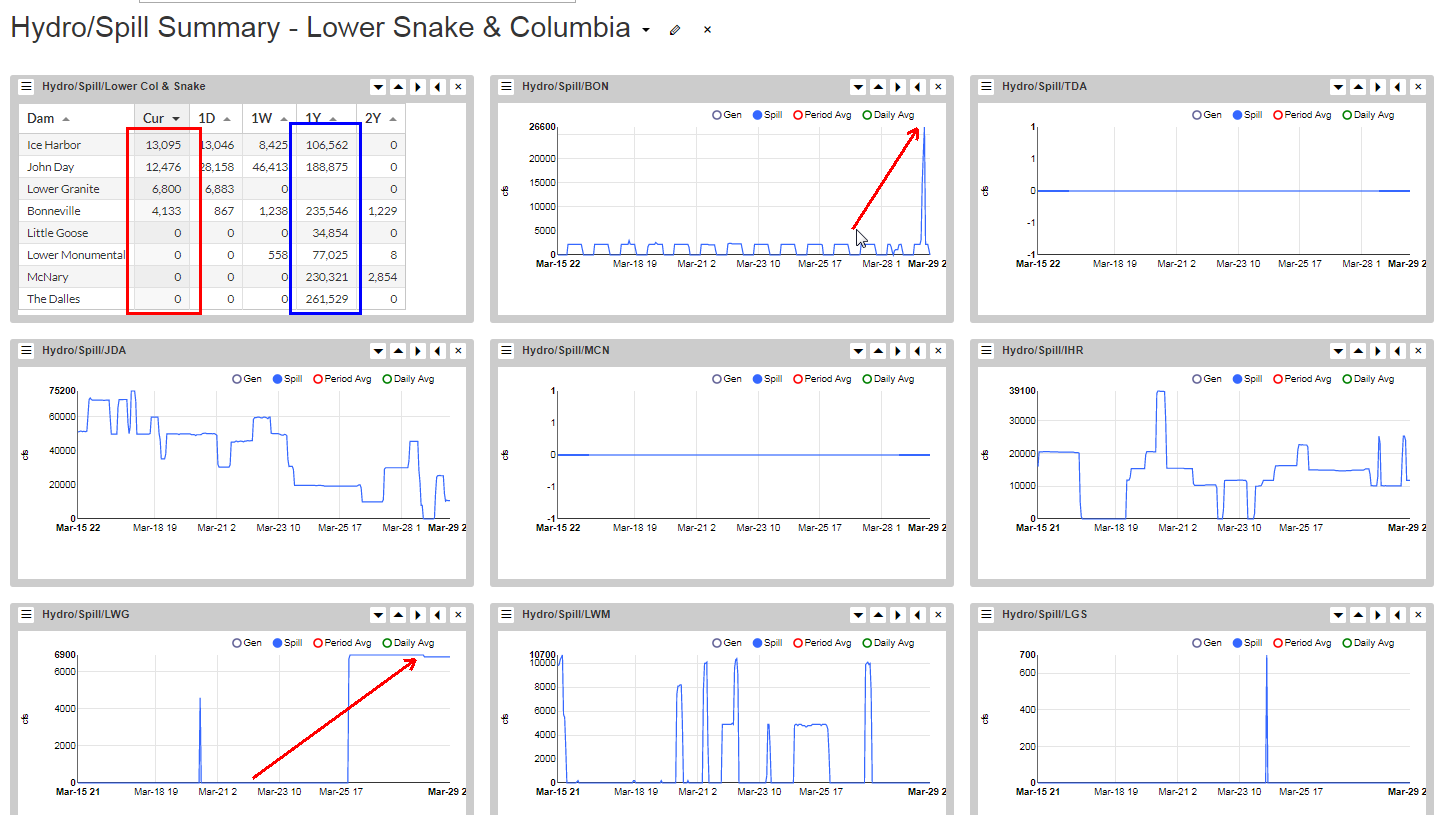 Last hydro babble, this is on Spill, which commences (fish-driven) over the weekend. Already seeing a couple projects “test spill”. With tight water and steady demand, it could make for some interesting cash next week. In fact, the most bullish week of April should be next week, so you might want to hang on to your length and see what happens. Final comment, check out the spill last year v.s this year.

Lots of changes on the AC, starting with a new two month long outage on the ISO side of that line resulting in derate of 1700 MW. That is material and bearish for Aug-Sep, I’d expect both to get pounded today.

Flows on Path 26 are mostly northbound while flows into the ISO from Mead and Palo are backing off – all of which speaks to the bearishness of cash inside the Cal. But, not so bearish that the DC backs off.

More bullish outside of the ISO than inside. The spring has further compressed off of cold Northwest, but when it releases you might want to get out of the way.