We’ve made a few subtle changes to our STP reports.  The least subtle change is likely the addition of all years dating back to 2000 in the Year on Year report.  If you want to share any feedback, please don’t hesitate to do so.

Every month not named March saw wild swings this week, mostly in the downward direction.  January fell 929 aMW after several consecutive weeks of increases.  February made its mark as the only month with increases, jumping 1,249 aMW.  March dropped a paltry 63 aMW, while April was the largest mover as the forecast plummeted a massive 1,970 aMW week-on-week.  May continued its helter-skelter forecast, this time decreasing 999 aMW.

January’s differences are punctuated on the 28th where this week’s update shows a 1,700 aMW decrease.  February quickly reversed that trend however, as every day beyond the 3rd was significantly increased.  March continued those gains until the 13th where projections took a sharp dive.  April began the month behind and that gap only increased, eventually leading to a 3,300 aMW difference by the 30th.  May began with a 4,900 aMW difference before seeing the trend quickly change course before eventually leading to a week-on-week increase during the latter days of the month. 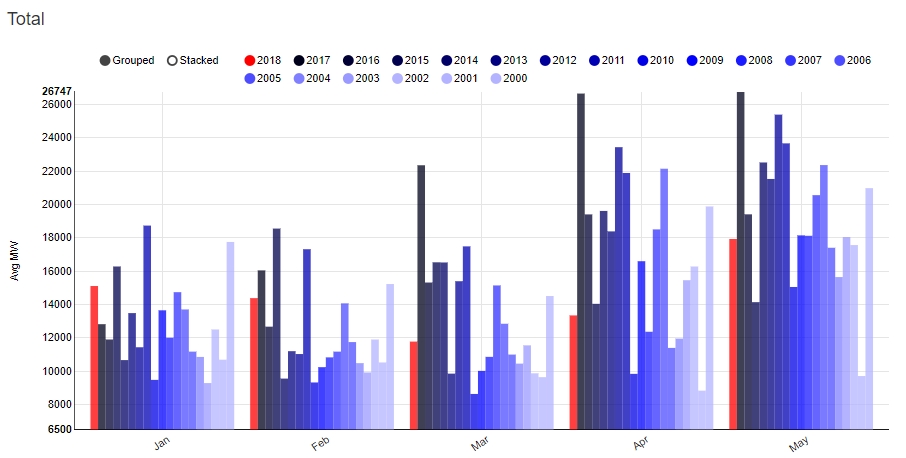 Despite January’s cuts, it still shows up higher than all but three years dating back to 2000.  March and April are moving the opposite direction, especially compared to last year’s massive numbers.