Today is a choppy outlook, no definitive nods toward bullish or bearish, but please draw your conclusions.

This is the hourly DA markets and what struck us was the lack of congestion, even at Palo. Another takeaway, the very low prices being posted inside the ISO.

Same plot, just extended out for a week and SP traded premium nearly every hour, but not at all over the weekend, unlike last week’s weekend.

These are Daily averages for DA HL; again, take note of the weak prices which may explain why Palo exports to SP fell off a cliff: 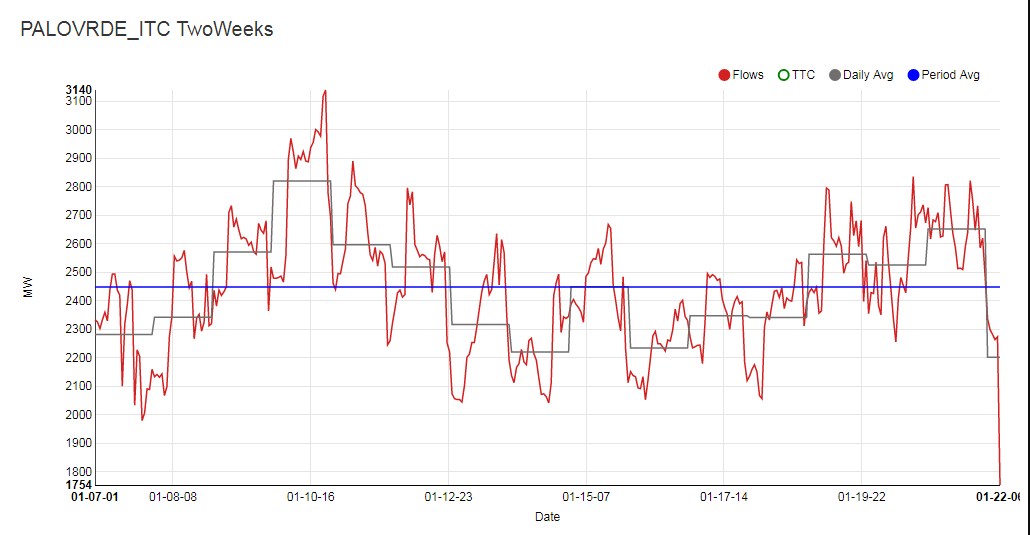 Some of that drop may be explained by a 300 MW derate (Devers-Red Bluff No.1 500 kV Line overlapping with Liberty PS), but doubt that since the line doesn’t even come close to TTC.

The Feb Socal Citygate contract is soaring for Feb and going nowhere in March. All hubs saw an uptick, week-on-week.  SCG’s strength must be explained by the Needles issues:

With the most recent “fix” re-broken, the LDC is down about 750 mmcf/day. Despite the return of the outage, spot gas is relatively weak:

Relative, we say, when compared to where spot traded in December with the identical Citygate supply fundamentals, except the LDC had about three bcf more in storage then, than now. 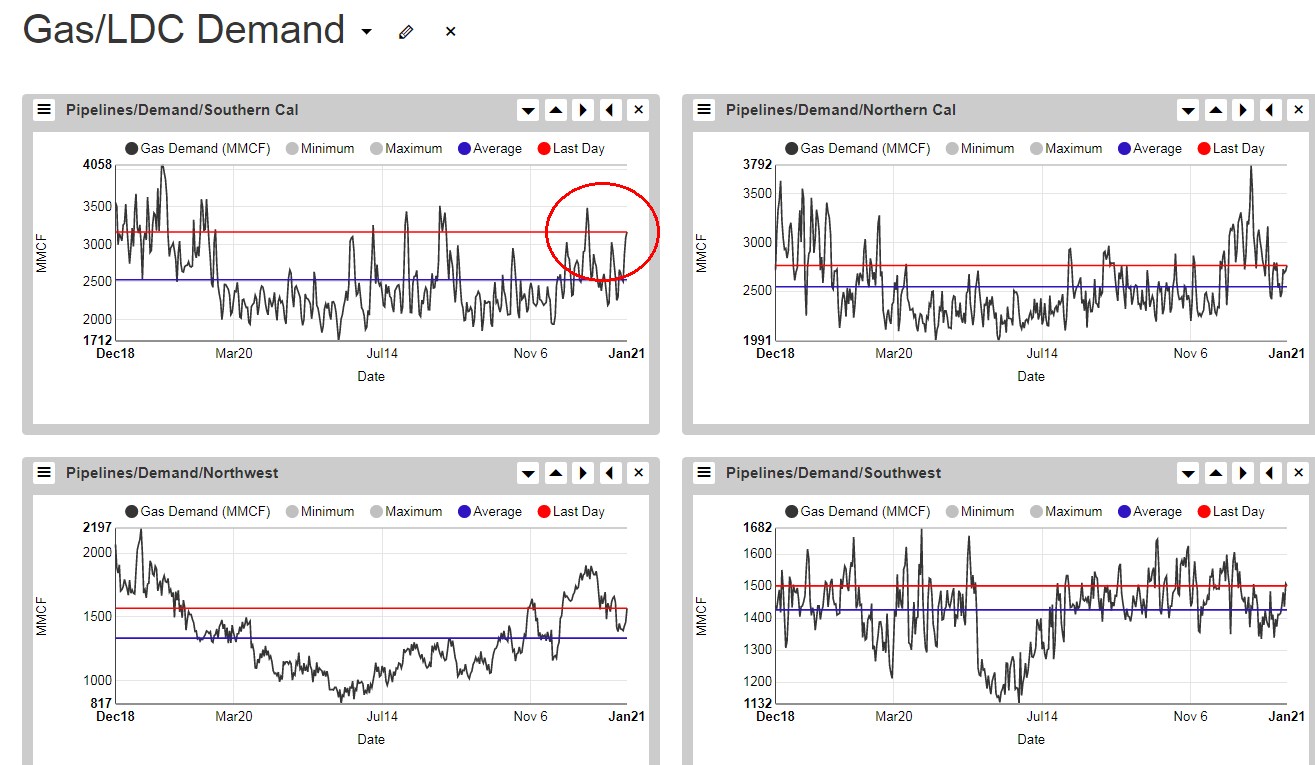 SP was the only zone that showed a core gas demand rally of note; both NP and MidC are down, the latter is way off from a month ago. The Southwest shows a slight bump.

This report stacks the two California LDCs side-by-side and is useful for getting a quick snapshot of what is happening inside the Golden State, gas-wise. PG&E’s storage is down 3.5 bcf in just a week and now is below last year. Socal’s storage is off 1.8 bcf in a week but remains nearly 12 bcf ahead of last year. 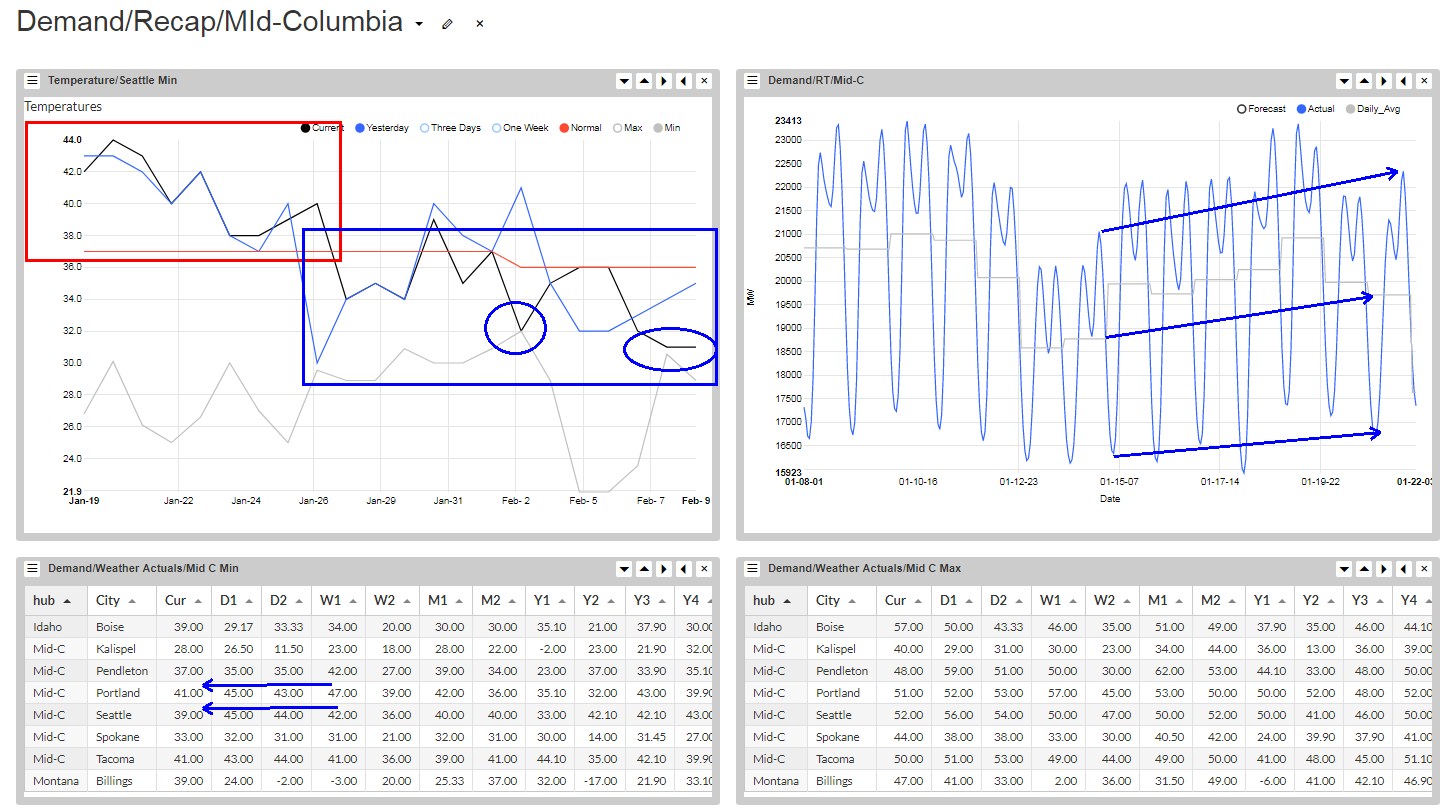 The Mid-C is a tale of two forecasts; warm in the front and cold in the back. So cold, that a couple of Seattle days are projected to touch ten-year lows. We think there is as much chance of that coming to fruition as Trump passing a polygraph. Sunday loads, week-on-week, are up but remain weak. Seattle’s lows are lower, but its highs are about the same as last week. 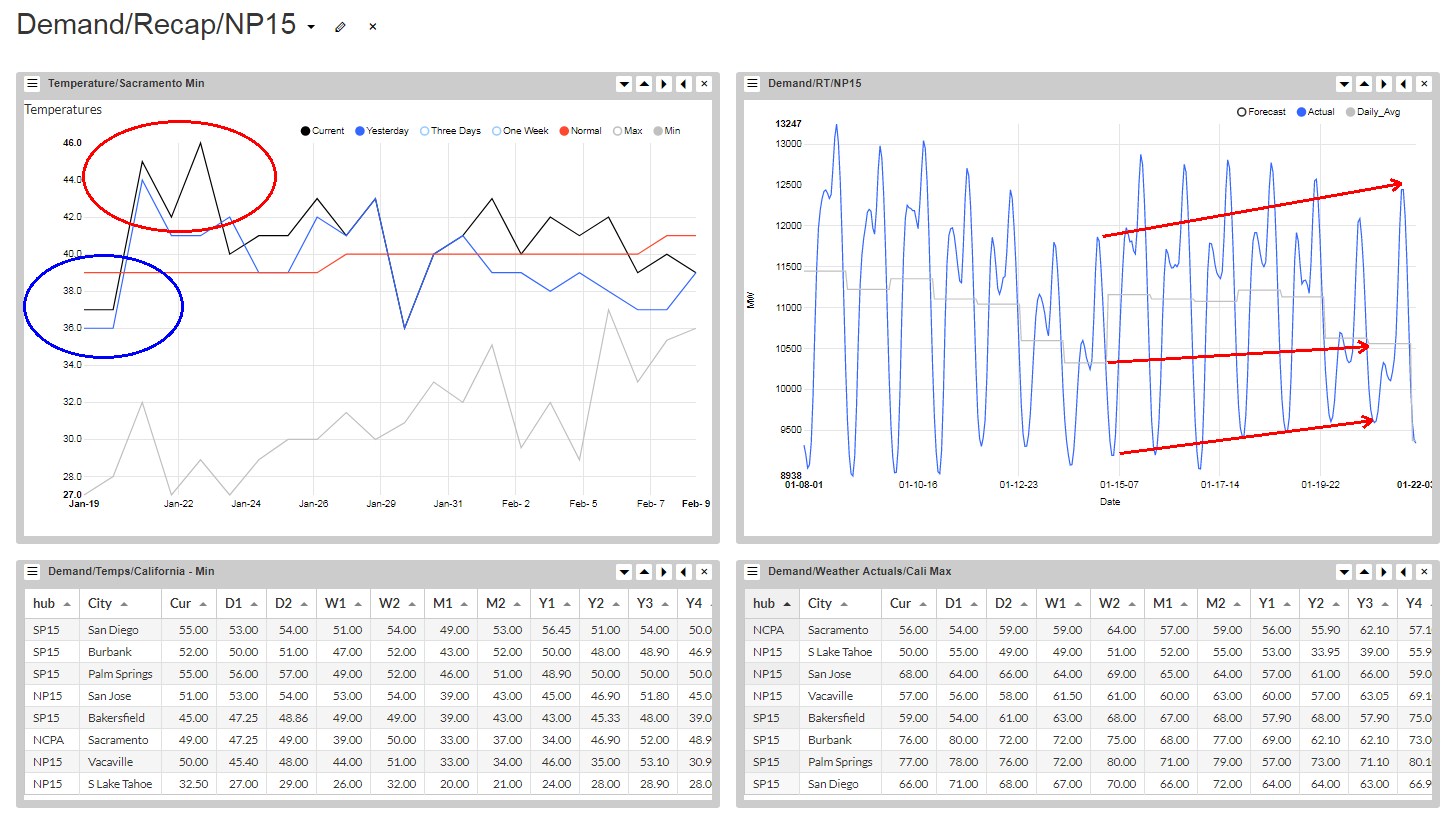 Where NP was a touch chilly over the weekend, it will grow quite warm this week, but not warm enough to fire up anyone’s ACs. Like Mid-C, loads are up week-on-week. 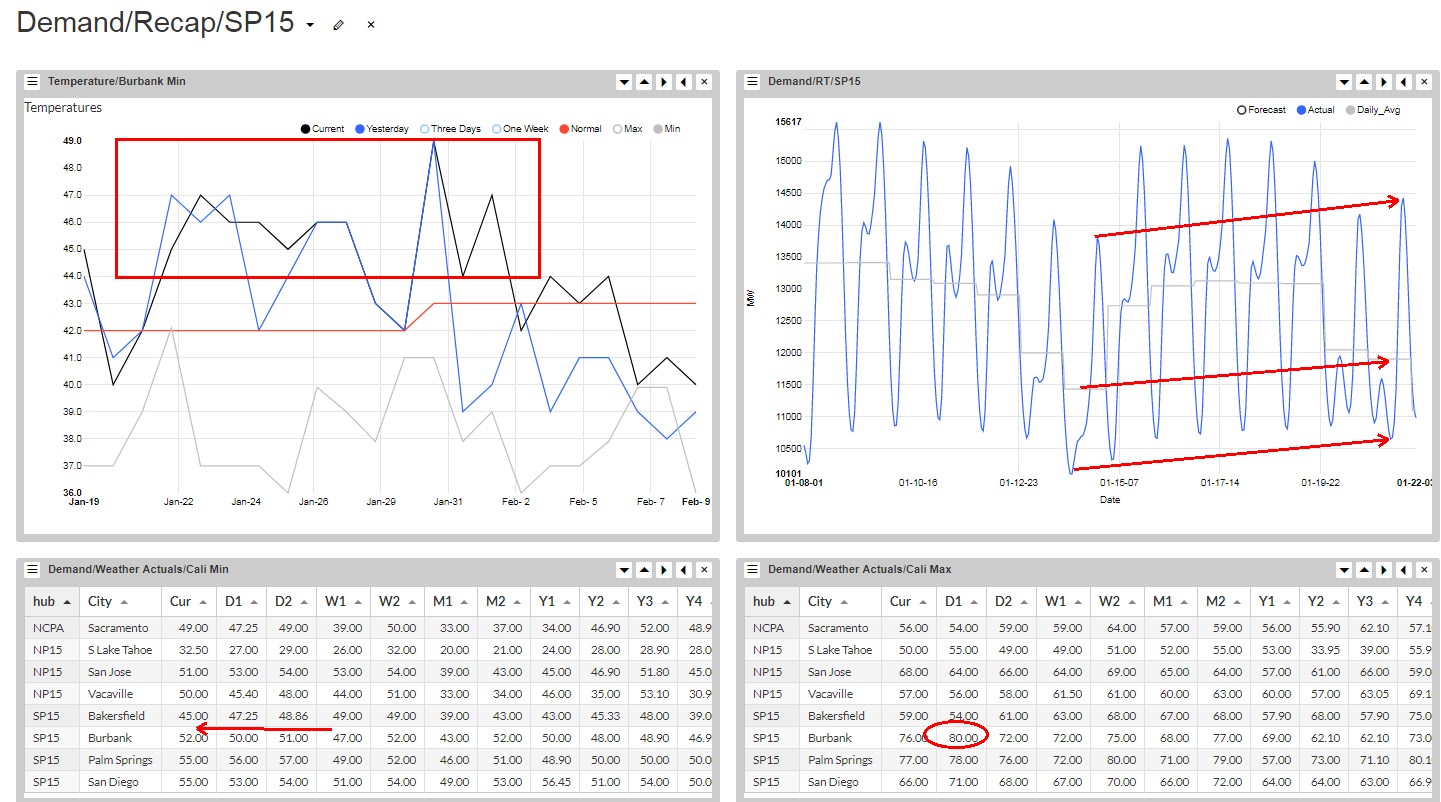 Burbank touched 80 on Saturday which is a sign that maybe I should swap out the Min Temps for Max because Min is growing increasingly irrelevant as spring approaches. Loads were up, but most of this week-on-week bump is due to last week being a 3-day weekend, we think. 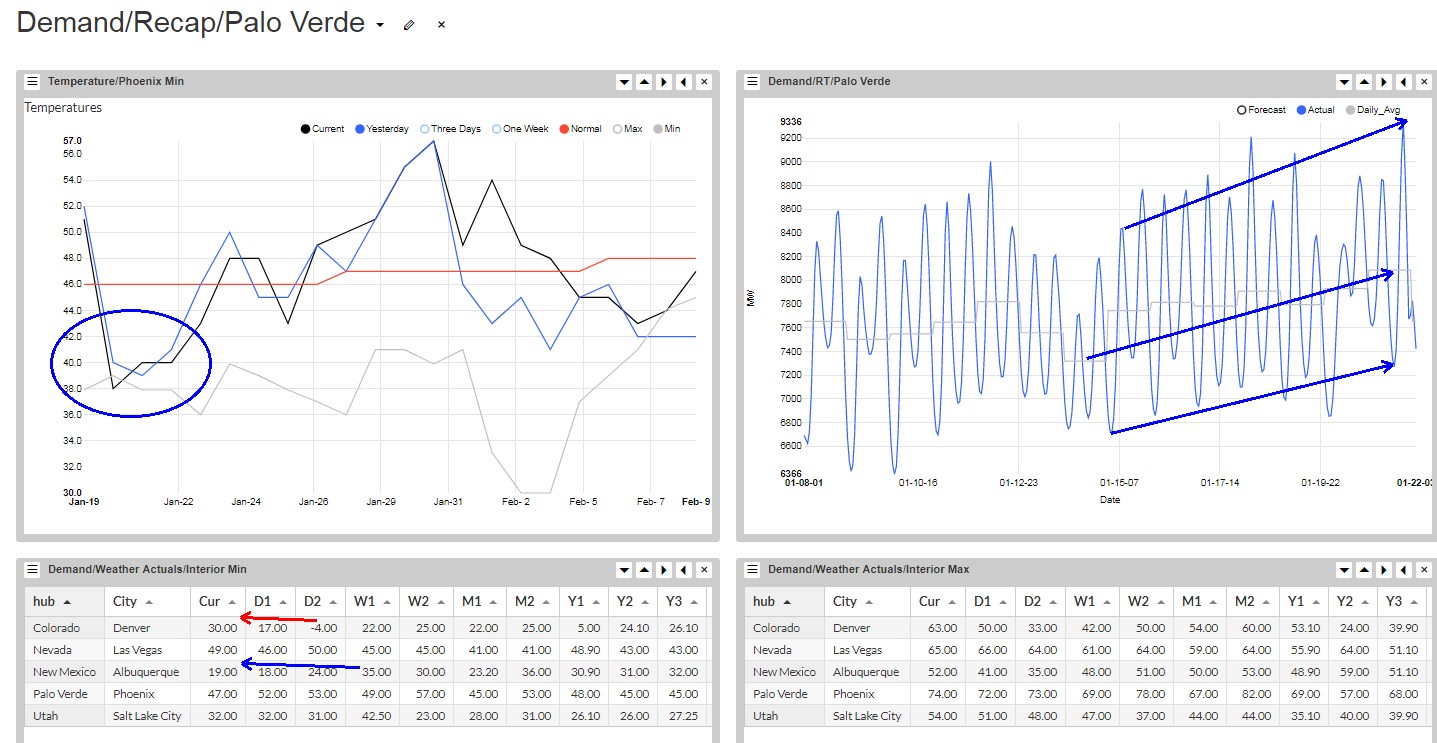 Phoenix is poised to set a new 10-year low this week, and its loads soared over the weekend, which is the real reason congestion is gone, and exports have tumbled.  This week’s cold will be worth watching to see its impact on forward markets. 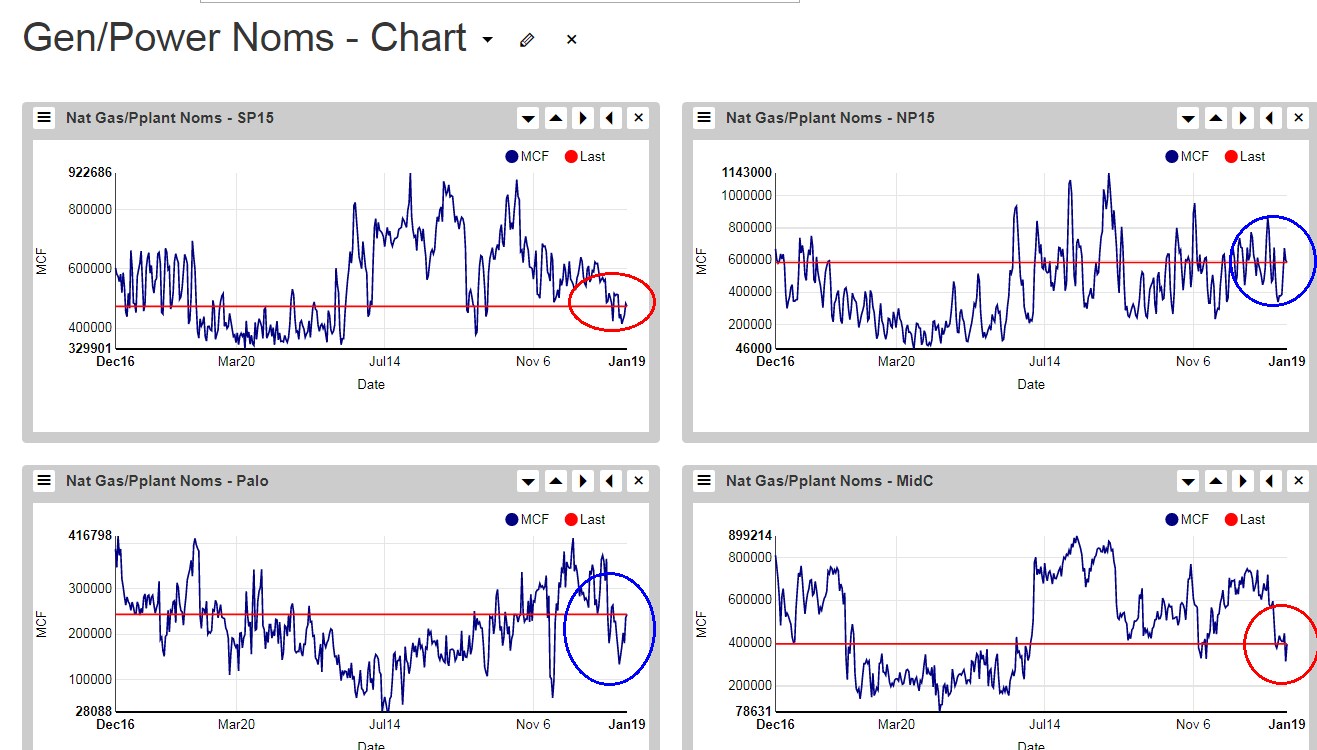 SP’s noms are dropping, but not as fast as the Mid-C’s. Both Palo and NP saw a bump in total gas nominations for power, neither, though, are anywhere near their winter highs. 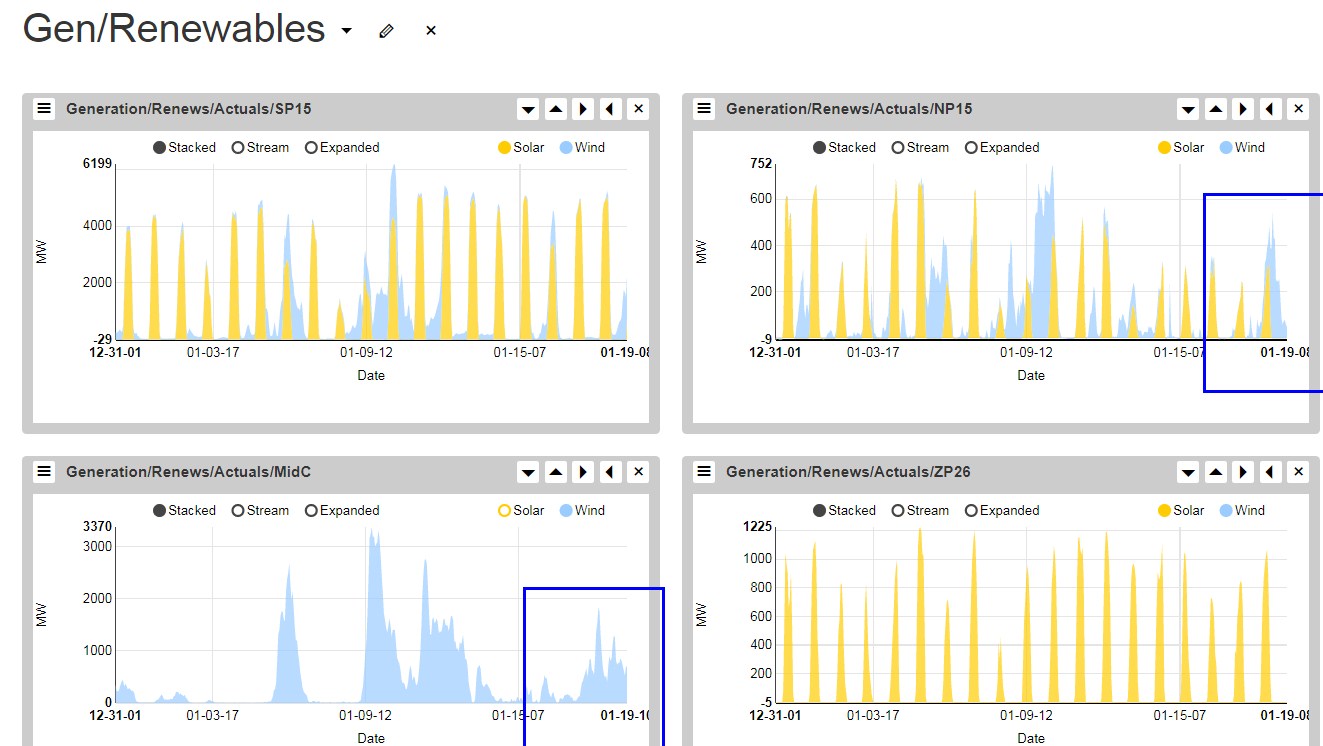 Both NP and MidC saw a modest amount of wind energy yesterday; even SP registered a few watts. NP’s solar has been shuttered over the last week, but SP’s is robust. 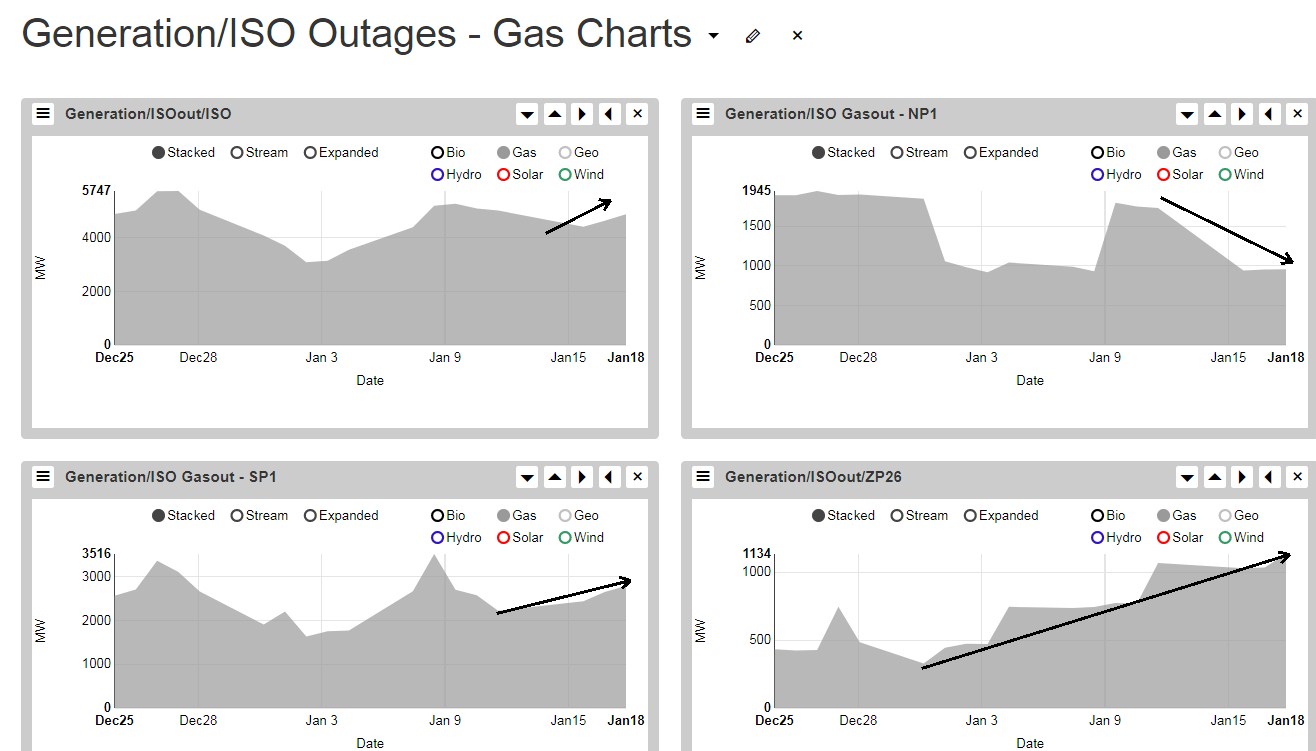 Total ISO gas outages are up, but NP’s are down while ZP’s are way up and SP’s are just up. The ISO’s peak outages occur in April so expect more planned outages added to these plots over the next couple of months.

The Northwest will realize a “wet” week, which means it will realize about 50% more precip than normal. But, the week beyond is almost completely dry, check out Spokane with nary a raindrop on its far horizon. Of course, these 8-21 day forecasts have performed abysmally this year, but let’s watch it.

Coulee continues to draft its reservoir, having pulled nearly four feet over the last ten. Outflows, during this drafting, have not budged underlying the overall tightness of water in the Upper Columba. Bear in mind, those drafted feet in January are non-drafted feet in April. Perhaps this big storm drives a rapid refill, doubt it. What will drive a fast refill will be the Upper Columbia flood control drafts.

The big drafts are scheduled for February; five plants will be pulling water with Duncan dropping 27′ per the latest COE guidelines. In other words, there will be plenty of bullets to fill Coulee, but these are not massive drafts, aside from Duncan.

The Canadian flows are remarkable for how unremarkable they are — very little volatility as the system is 100% under regulation. Even the Peace isn’t cycling.

Flows on the Pend Oreille have picked up but are still below normal; that river will crest close to 100kcfs this year. All the other stations are at or just below average.

Flows on the lower Snake were cut last week and remain at those low levels despite a slight uptick in discharge at Dworshak. Drafts at Libby and Horse are light. 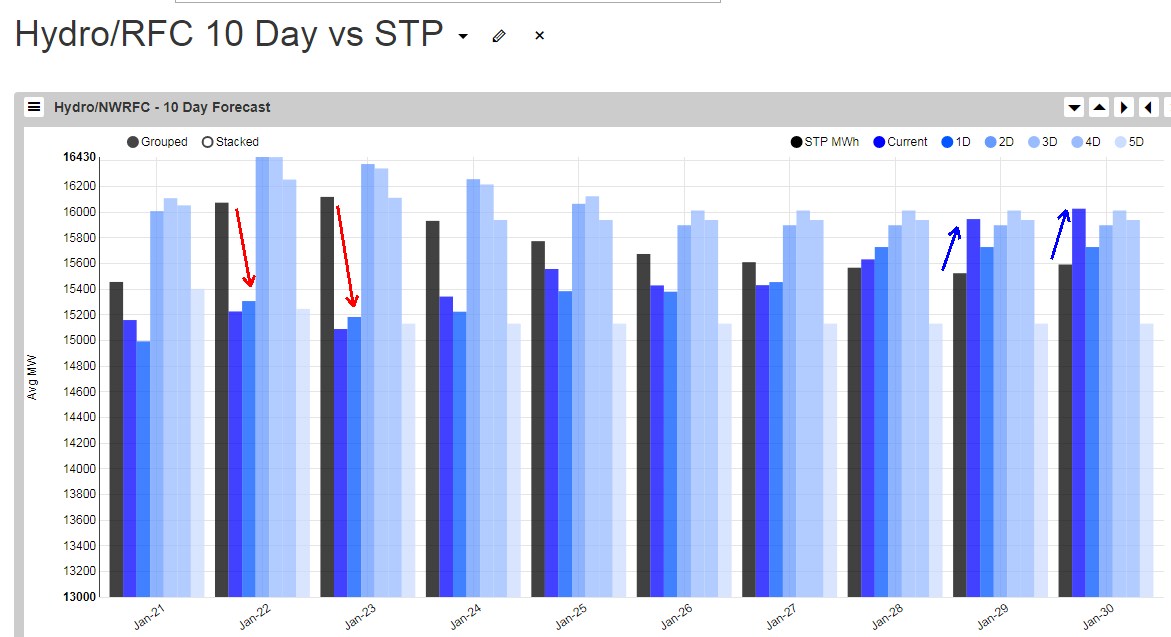 Friday’s ten day offered more cuts against both last week’s STP and Thursday’s forecasts, though in the back (days 9-10) there is a slight uptick. We’d think the March will realize more water today, perhaps Feb, too.

BC was a seller over the weekend, reversing a trend of steady buying. The south-bound flows hit TTC most hours, which is the same as last week. Intra-California flows are weak as evidenced by ZP26; very little energy is flowing south, or north. All you have to do is look at those DA LMPs, and you’ll know why. Prices are flat across the ISO; no one can afford to pay for losses.