Temperature anomalies are climbing in Mid-C, especially east of the Cascades as Spokane shows a 6+ degree variance from average.  Three out of four of SP’s stations show anomalies greater than 3.8 degrees, especially Burbank as Spring looks to come early.  Just one station in the West reports lower than normal daily average temps — Vacaville, and even that is just a half a degree.

While most stations hover either at or below normal for precip, the Northwest is set to get dumped on, though the question is how high in elevation do we need to see that fall as snow?  The temp anomalies above suggest pretty high. 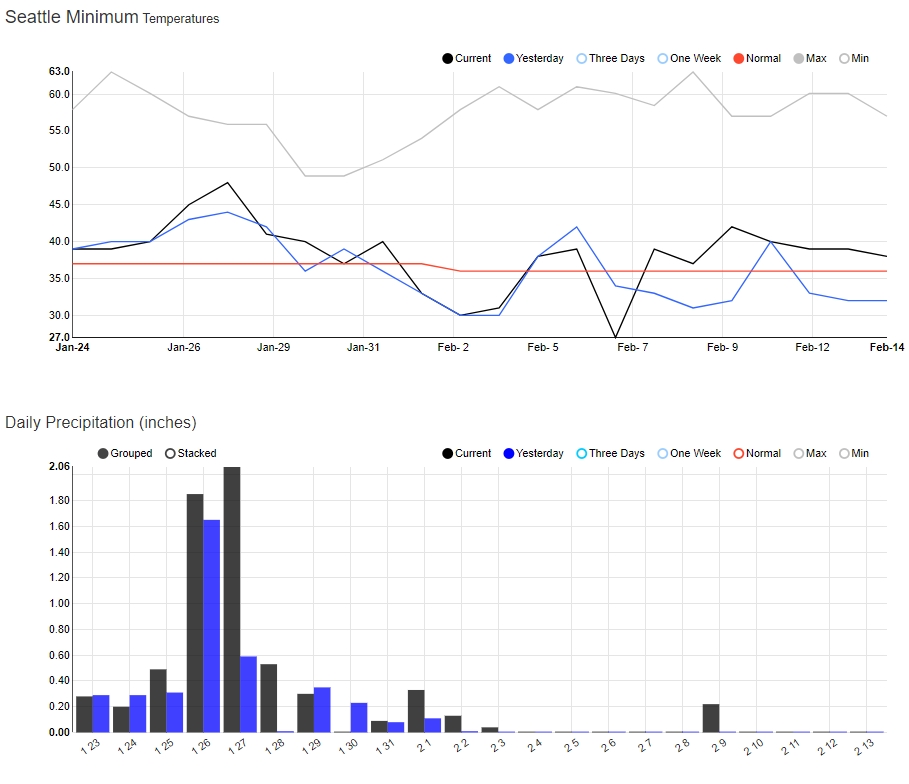 Seattle’s minimum temps will climb as high as 48 by the 28th, but with that comes nearly 2″ of rain on back to back days.  Those mild temps are likely to work their way up into the lower elevations of the Cascades, likely causing some serious runoff in the process. 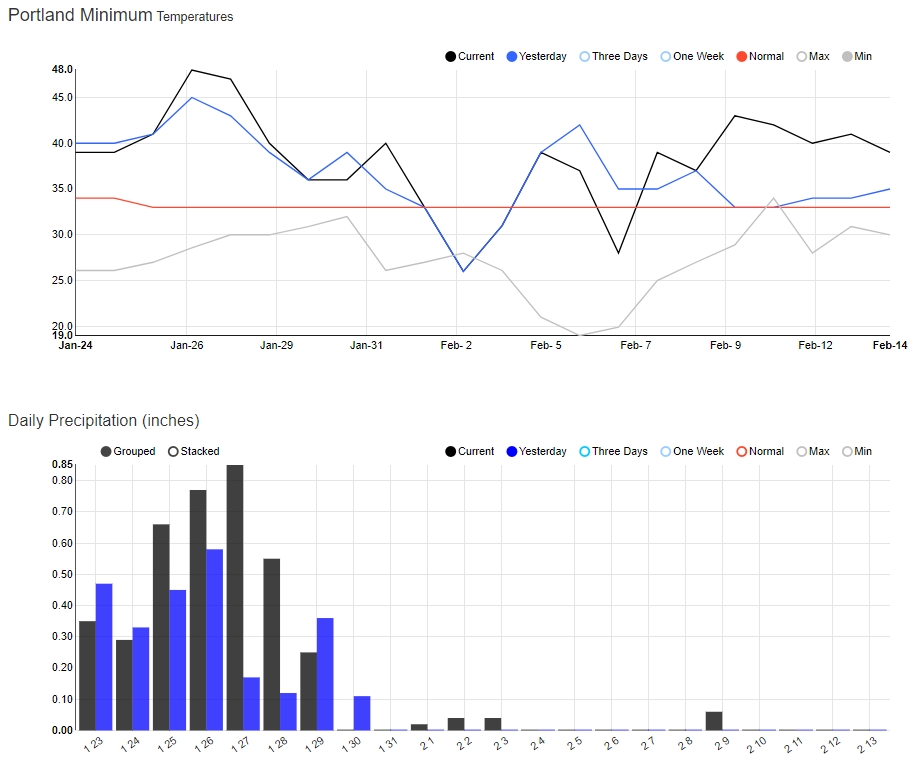 Precip isn’t nearly as heavy in Portland, but there are still several consecutive days with more than 0.50″ of rain.  Daily lows climbed higher than yesterday’s forecast and are expected to stay in the 40’s over the entirety of the weekend, also coinciding with the heavy precip. 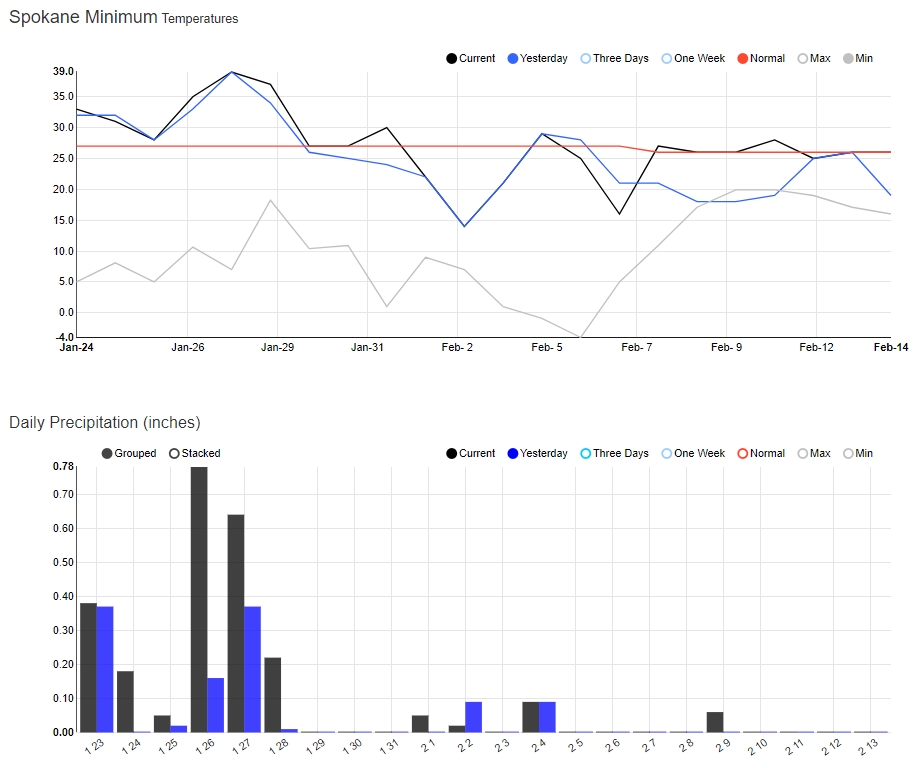 If you’re chasing snow in on the east side of the Cascades, things are looking up a little precarious.  Spokane will get a couple days of heavy precip over the weekend, but combine that with expected lows of 39, and highs in the low 40’s, and we might see most of that precip fall as rain outside the highest elevations.

San Jose should get a brief drop below normal on Friday as daily lows are projected to fall to 38, five degrees below normal.  The cooldown will be short lived however, as low climb back into the mid-40’s a couple days later.

Essentially the same forecast in Sacramento as well.  Watch for lows to drop to 36 on the 26th, three degrees below normal, and one of just a handful of days expected to drop below average over the next three weeks.  Minimum temps are forecasted to climb as high as 46 by the end of the month.

The beginning of next week calls for a return of 80-degree highs as the 29th is expected to climb to 83, 14 degrees above normal, and well above the previous 10-year high of 78.  Just one day over the next 21 is projected to fall below normal.

Burbank looks much less stable than Phoenix as temps fall from 76 today to 63 tomorrow before climbing to 83 by Sunday.  Next week saw highs push well above yesterday’s forecast as the 31st climbed 17 degrees higher.  Watch for daily highs to stay above normal through at least the end of the month following tomorrow’s cooldown.

Frigid temps aren’t expected to return to Denver until February as minimum temps are set to climb as high as 39 by the 29th, 20 degrees above normal.  Temps could potentially fall back into the teens by the 1st however, as a low of 16 is currently forecasted.

STP continues to trail behind the 10-Day forecast, especially on the front-end where the difference is as high as 410 aMW.  Though even the most recent 10-Day updates falls well short of forecasts from over the previous weekend.

While many of the smaller basins continue to pace below average, the largest sit comfortably above that line (though with warm wet weather on the way, we’ll reevaluate soon).  Spokane is nearly two inches (SWE) above normal for the year, while Clark Fork sits at 2.7″ above average.  No basin above 10,000 CMW is below normal, in fact the largest basin to fall below average for the year is Rocky Reach at 7,844 CMW.

After setting new 10-year highs from the 12th through the 19th, Grand Coulee slowed it pace slightly and sits at 85% as of today, still above the average of 84%. 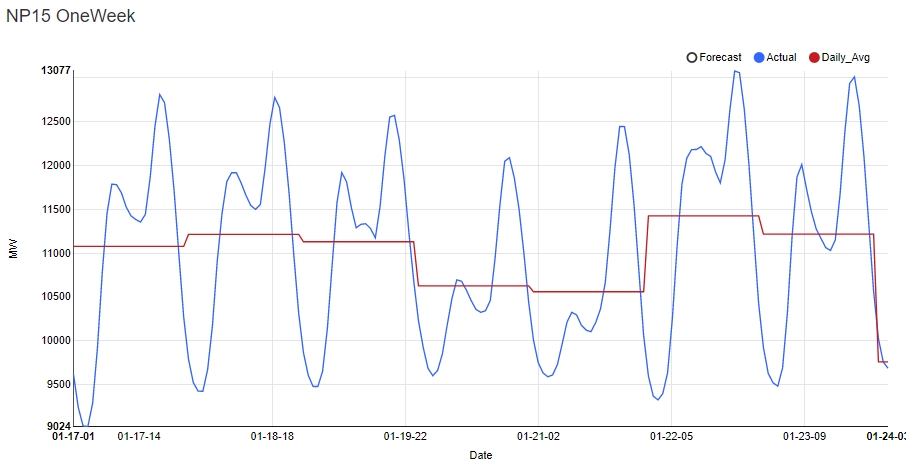 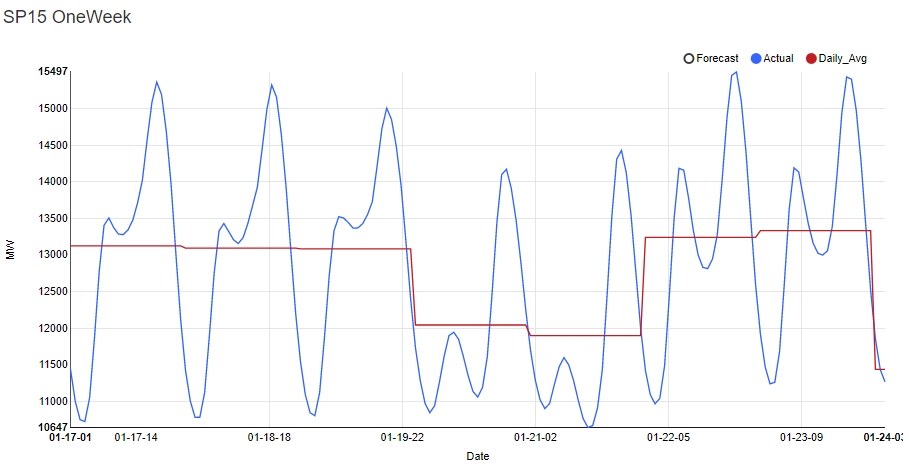 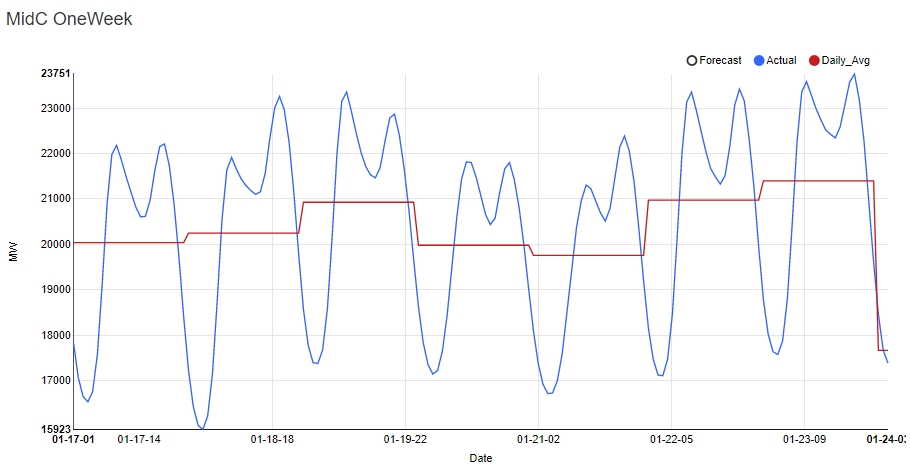 Mid-C loads climbed to 21,399 in average daily loads yesterday, an increase of just over 400 MW day-on-day, and an increase of 1,400 MW week-on-week.  Peak loads also grew yesterday, climbing 350 MW higher than the day before. 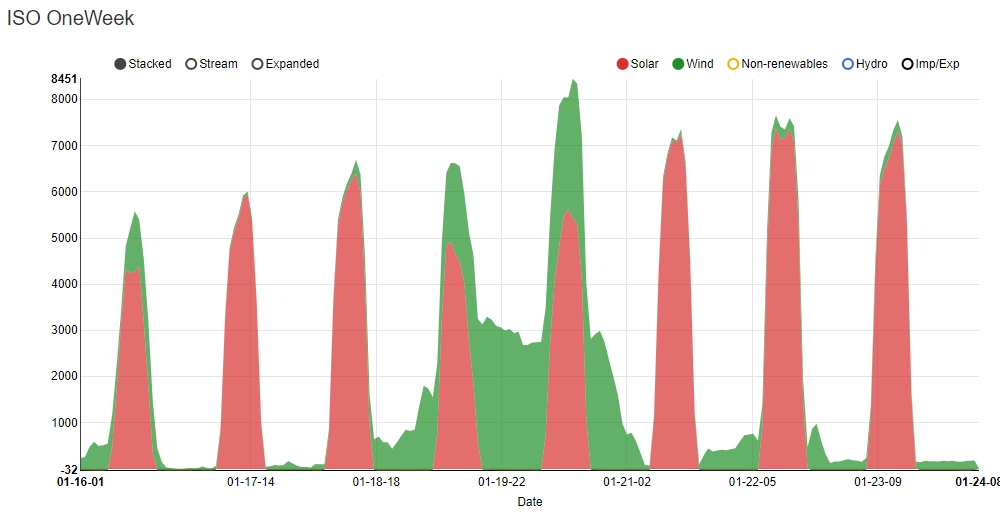 Wind and solar combined for a weekly generation high of 8,451 MW on the 20th, but as wind as trailed off, solar has failed to make up the difference.  Yesterday saw a combined generation total of just under 7,600 MW, down slightly from Monday. 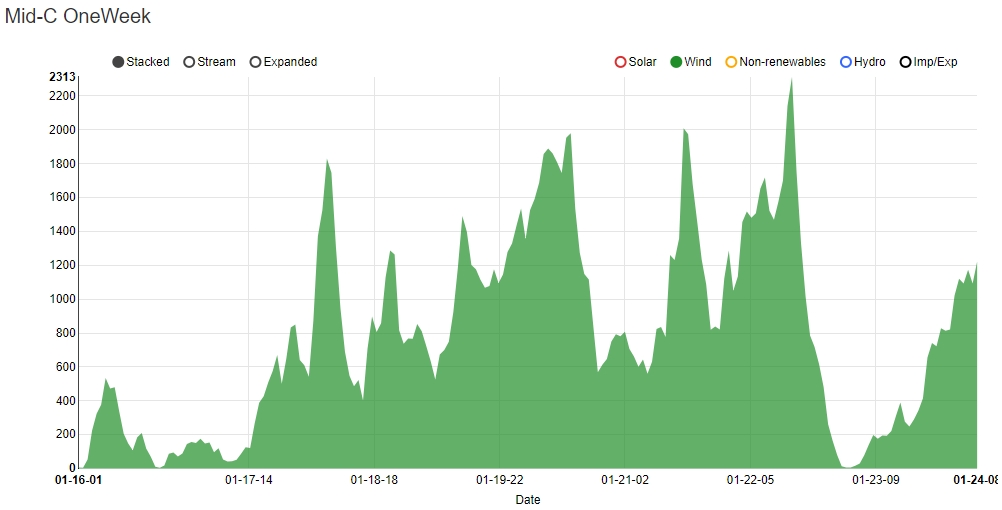 Wind picked up late yesterday after spending most of the day with negligible totals.  That momentum has carried over into this morning, though at just above 1,200 MW, it’s still a far cry from the 2,300 MW peak we saw earlier this week.