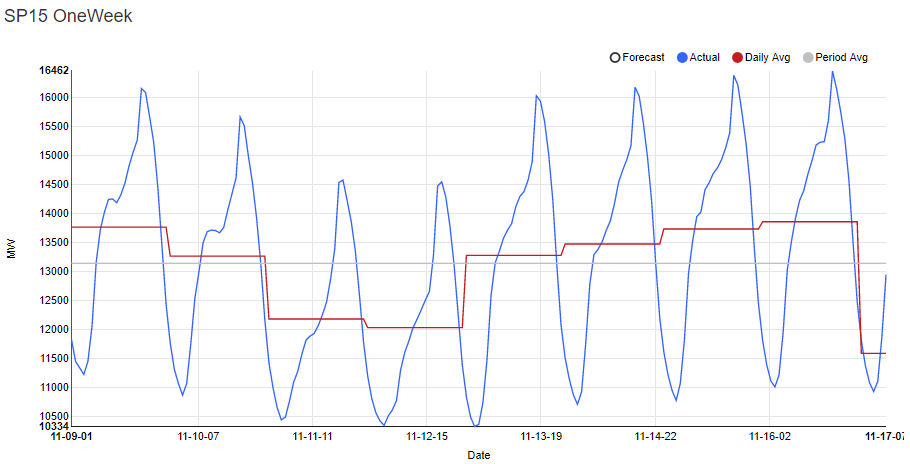 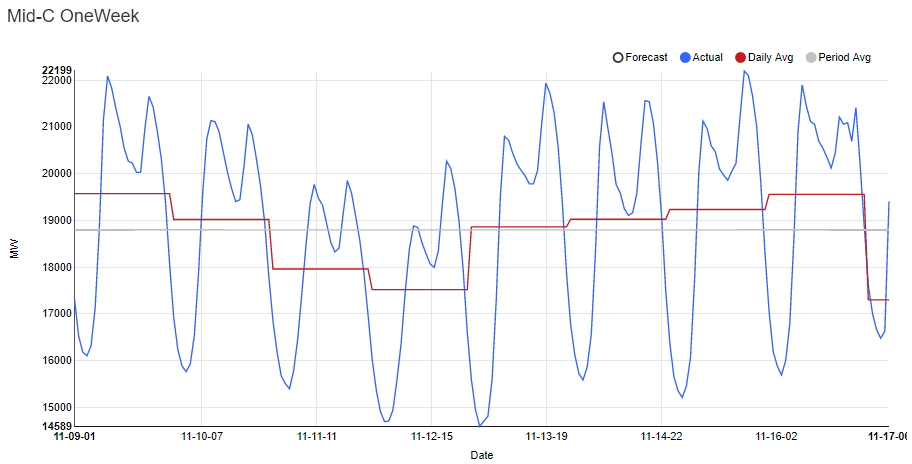 Mid-C showed similar growth as it too marked its fourth consecutive day of increased demand.  Loads finished the day up 330 MW in daily average, though peak demand fell nearly 300 MW. 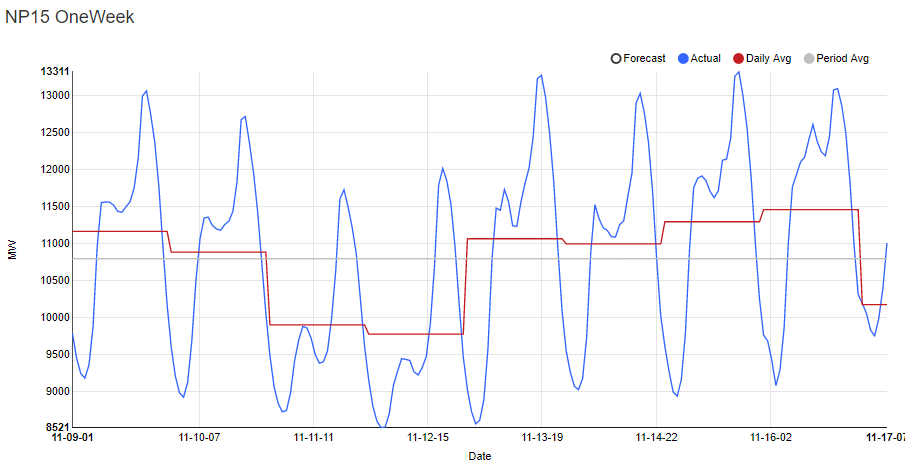 The 10-Day forecast took a massive cut across all ten days, but fell the furthest on the front end where a 1,300 aMW reduction was shown for today, and nearly 1,500 aMW for tomorrow.  The forecast picks up once again beginning next week, but remains well behind the previous forecast.

Early season snow has pushed anomalies (SWE Per) well north of 200% of normal for all but one Grand Coulee snow basin.  In terms of actual SWE, Upper Columbia and Grand Coulee had the largest week-on-week increases with an additional 0.68″ and 1.67″ respectively.

It’s warmer than normal for all observed stations over the next 10 days, especially in Denver and Spokane as temps hit 7+ degrees above normal in terms of average daily temp.

San Jose has potential to reach new 10-year highs for three consecutive days beginning on the 21st as temps climb into the mid-70s and 12 degrees above normal.  Highs should stay above normal though the 25th.

Burbank gets its own warm-up as well with temps climbing well into the 80s by the beginning of next week and culminating with a high of 87 on the 22nd, 16 degrees above normal and six degrees higher than forecasted yesterday.

Phoenix is maintaining its higher than normal highs through at least the remainder of the month.  Temps will peak at 86 on the 23rd, 14 degrees above normal and slightly higher than shown yesterday. 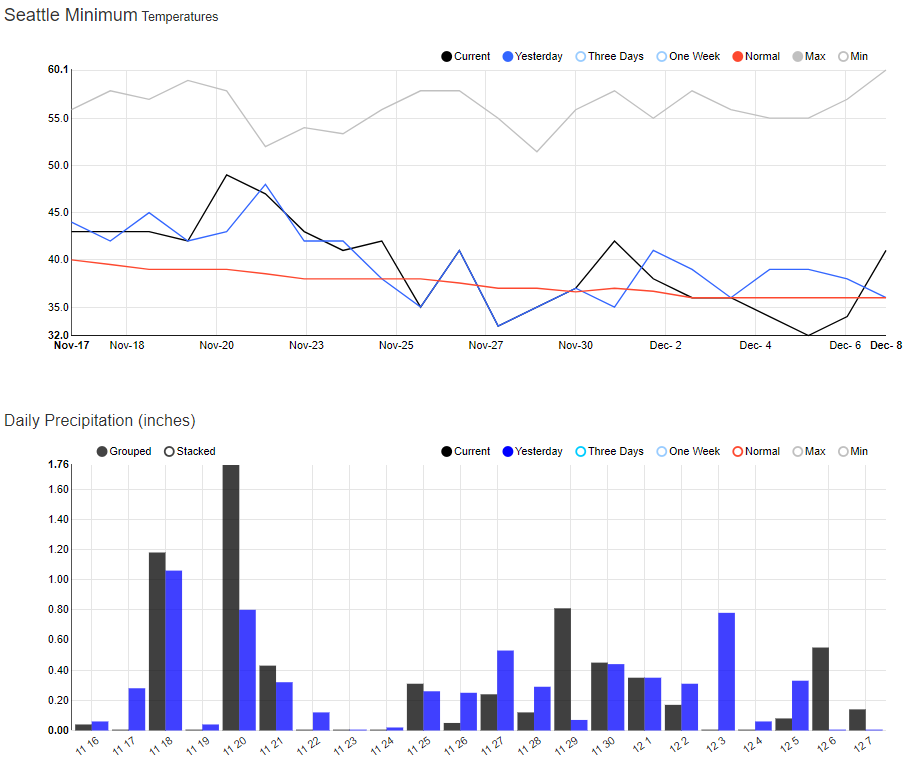 Seattle’s minimum daily temps could reach as much as 10 degrees above normal by the 21st, but will be bringing significant precipitation with the system.  Over three inches could fall from today through next Tuesday.

Spokane’s 7+ degree average daily temp anomaly is aided by daily lows sitting 14 degrees above normal on the 21st and 22nd.  Spokane should stay above normal through the end of next week.

Denver’s daily highs will jump above and below the daily average over the next two weeks with a trough of 48 on the 18th, and a peak of 67 on the 23rd (16 degrees above normal for the latter).

Denver’s lows look even more dramatic with temps reaching 19 degrees above normal on the 22nd and 23rd, and never dropping below 40 degrees. 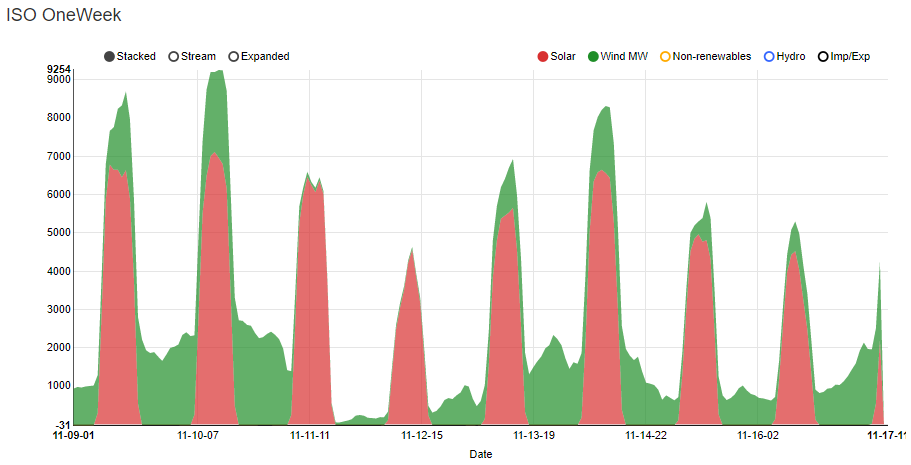 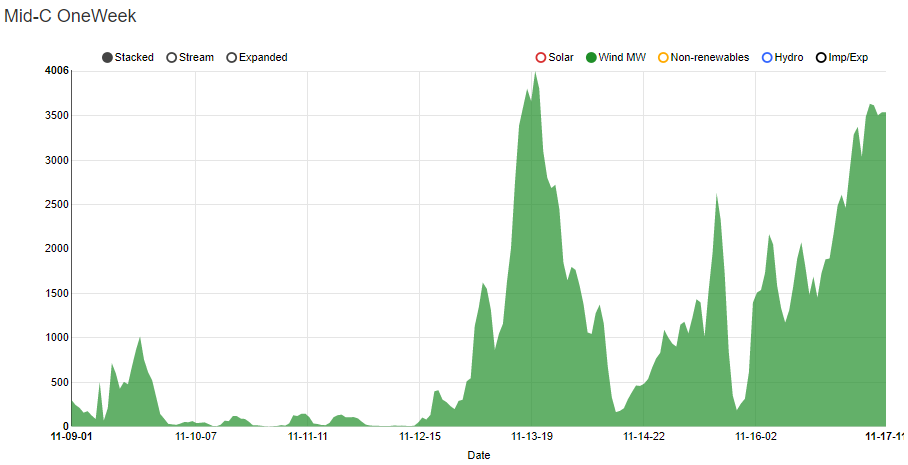 Mid-C wind shot as high as 3,636 MW earlier this morning, the second-highest level of the week, and just short of Monday’s hourly high of 4,006 MW. 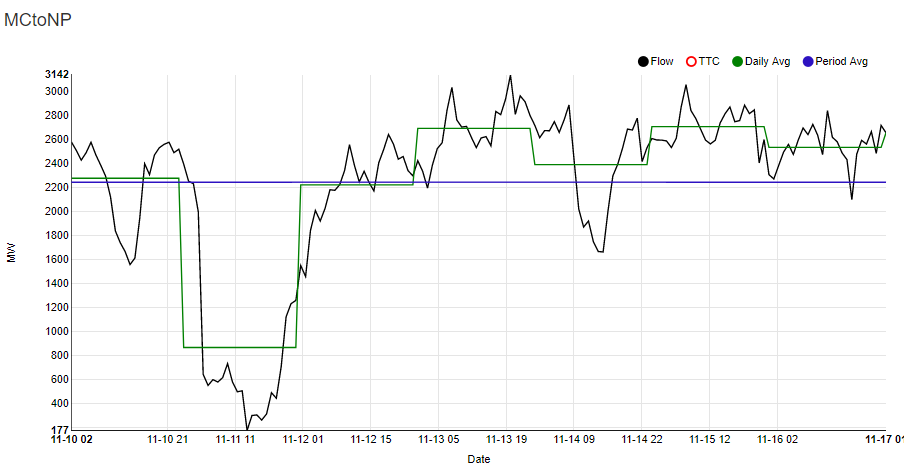 MC-NP daily average flows fell 180 MW yesterday in part due to a sharp decrease in flow during the 6PM hour.  Despite the drop, the daily average remained well above the weekly average (by 290 MW). 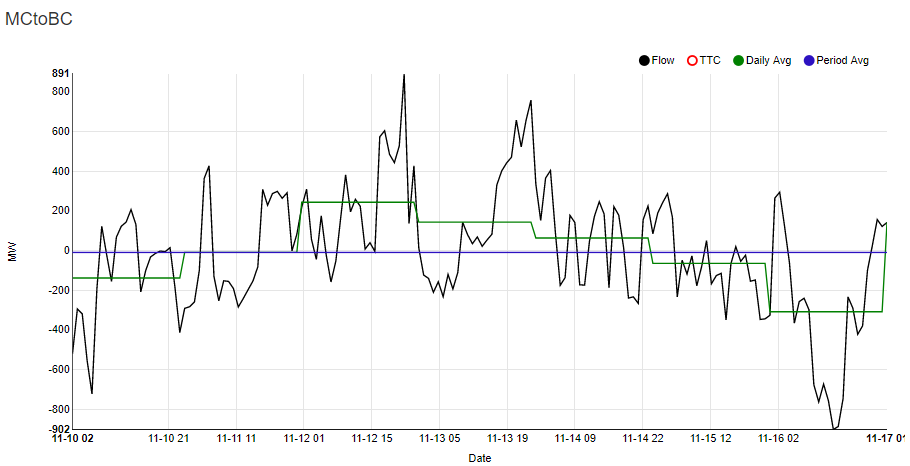 Big swings of hourly flow were in effect yesterday as flow moved from 295 MW north in the early morning to -902 MW south by the afternoon.  The afternoon declines were enough to decrease the average daily flow by -240 as an aggregate, marking the second consecutive day of average southerly flow.