The news of the day is the mid-90s in Burbank, a crazy hot day in the LA basin this deep into November. Will no doubt get Hollywood’s tree huggers screaming global warming and Bel Aire’s pool chillers cranking in overtime. Aside from those LA anomalies, there are other events of note to report … read on.

Surprisingly, for us, was the collapse of the SCG to PG&E spot gas prices; we’d have thought the LA heat would put upward pressure on that spread, we were wrong. TCW’s Needles intertie is still down, but it seems the LDC has found other ways to meet demand: 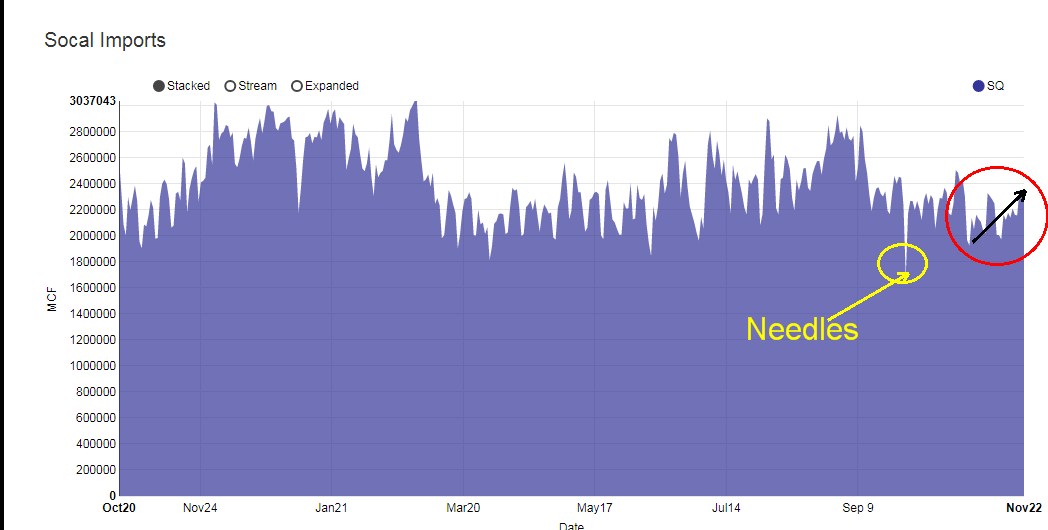 Imports are up 400 MMCF in the last few weeks, though they were still off 200 MMCF from the same date the previous year. If anything, being the contrarian that we are, we’d think this Needles thing is bearish. When it comes back another 600 MMCF of import capacity is thrown into the mix. I’ve always figured outages were bearish once they became known, and priced in, because the opposite state of an outage (the next expected state) is a return to service.

We also think the ever-growing SCG storage may have a bearish impact on the spread:

SCG pulled hard from storage the day the TWP tie went down, that is to be expected. But note the string of recent injections; averaging around 200 MMCF/day. Now the LDC is sitting on 7 BCF more storage than the same day last year:

That increase is in the face of the TWP outage. Perhaps gas markets are feeling more downside than up? We do.

The week on week DA LMP’s is off, at least the peak hour is off. We are also seeing increasing congestion on the Palo nodes and surprised there isn’t more on the Northwest points. After all, the DC has been down, and the region has been awash with water. That DC should be energized this week, today in fact, though we have not seen a kwh flow on it yet.

This is the same chart, just zoomed in on the weekend prices. SP still commands the premium over NP and everywhere else, and you can see the Southwest congestion during HE19-20. Prices should get more interesting with the impressive heat heading towards LA this week. 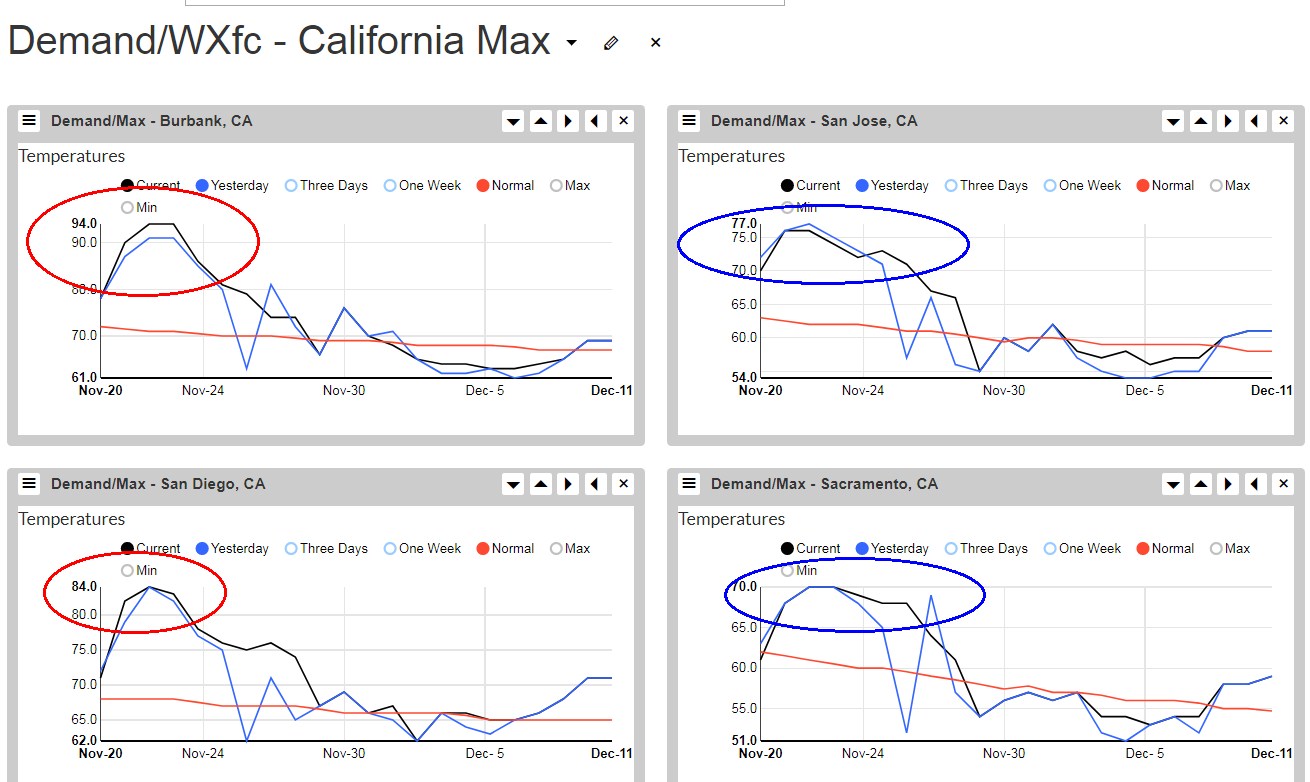 This late LA heat is singular, so is the degree day spread between NP and SP. NP has next to zero degree days; SP has about 20. Also unique, no other hub has any load event whatsoever, so LA should be the beneficiary of massive imports. 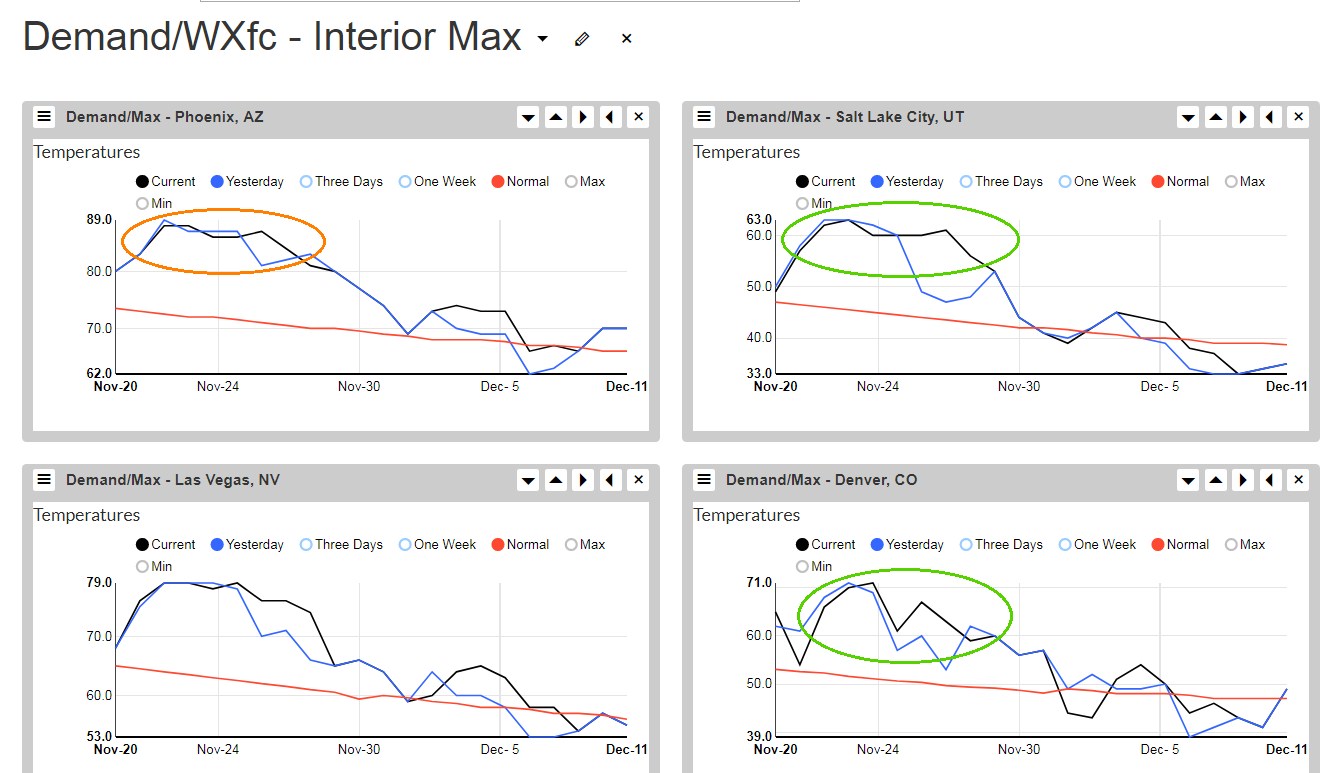 There is a first – Phoenix sports “normal” forecast days, though not for ten days. We mentioned the bearish state of the rest of the WECC, look at the mild weather in Salt Lake City and Denver. All hubs will be flush and long and eager to pounce on any SP rally. 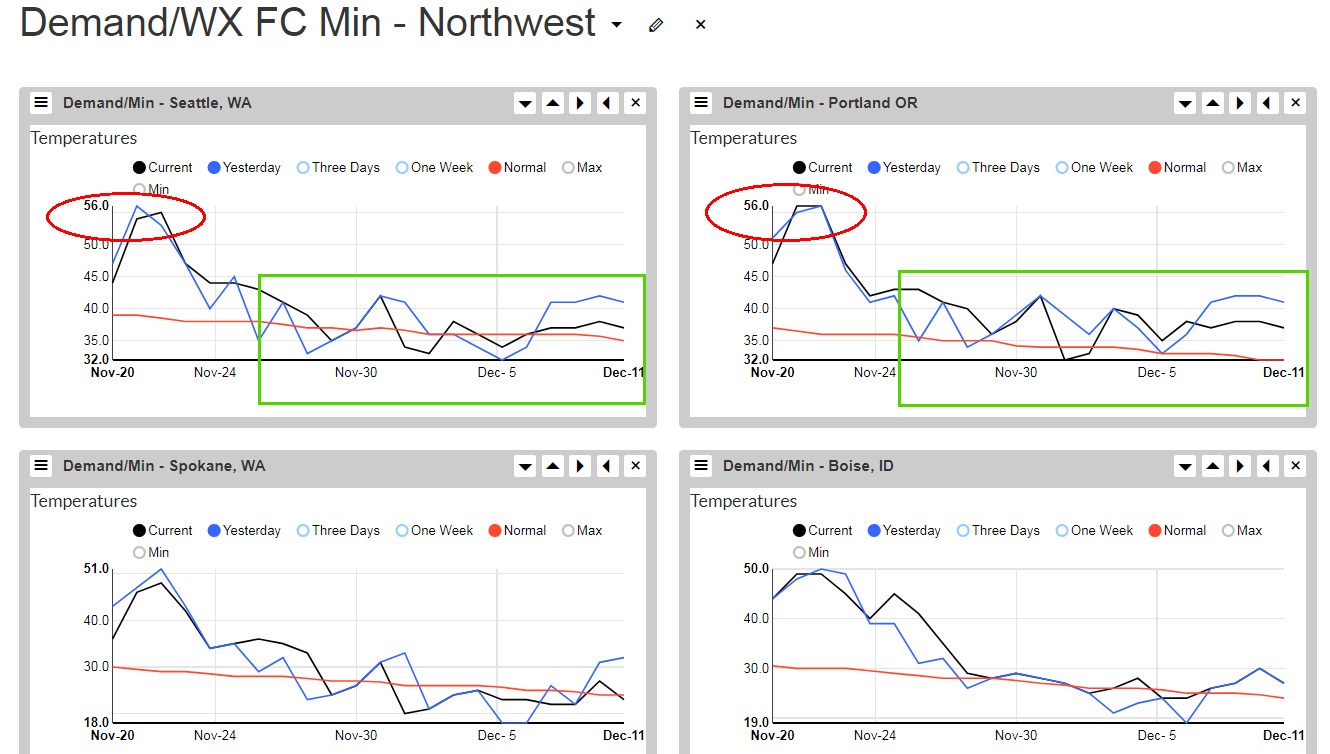 The Northwest is basking in its own heat wave, but the warm weather up there is just bearish. The backend of this forecast shows cooling but comes with a high standard deviation.

Sacramento was chilly over the weekend while the LA basin was just mild; so was the Northwest, though lows are nearly ten degrees lower in Portland than last week. 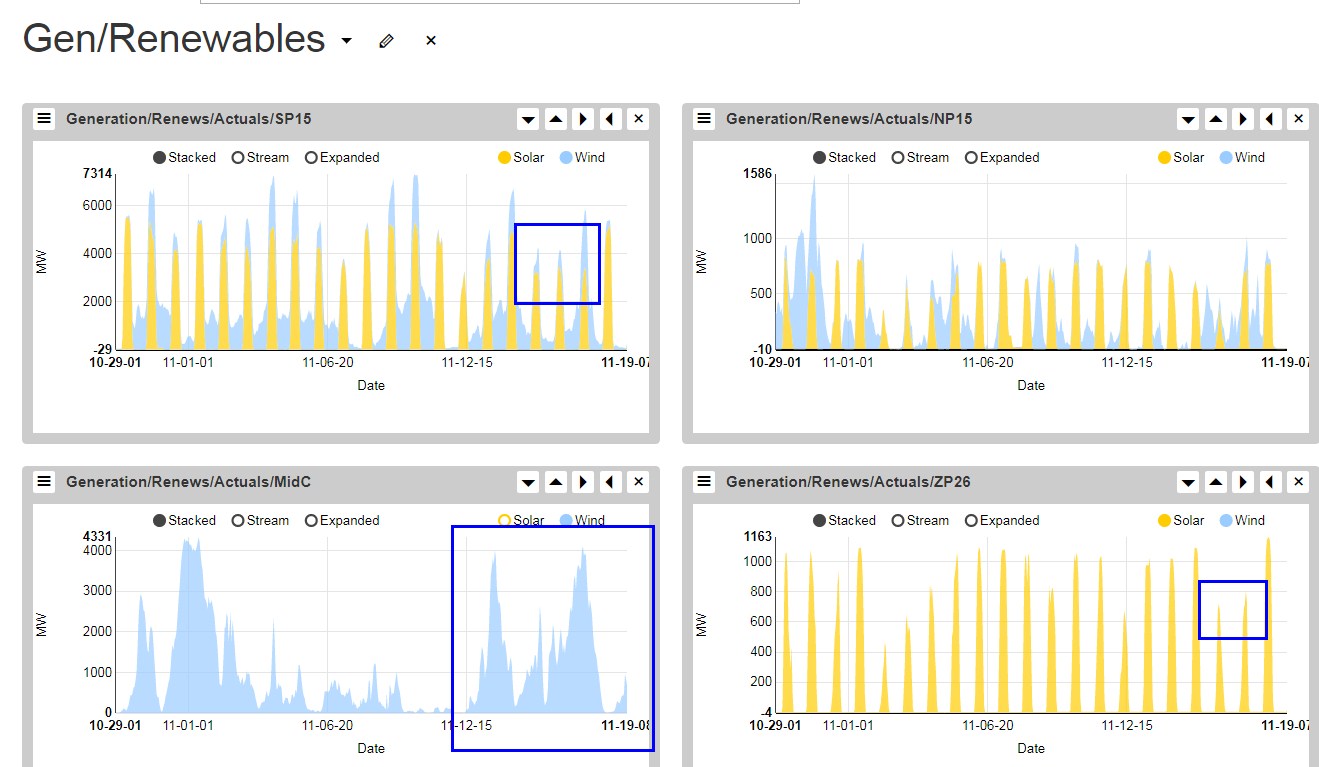 It rained hard in California, look at the solar haircuts from that rain. Also take note of the 4000 MWs of peak wind realized over the weekend in the Northwest, all the while the DC was down. That could be a 7000 MW net demand swing, assuming no wind and the return of the NOB line. 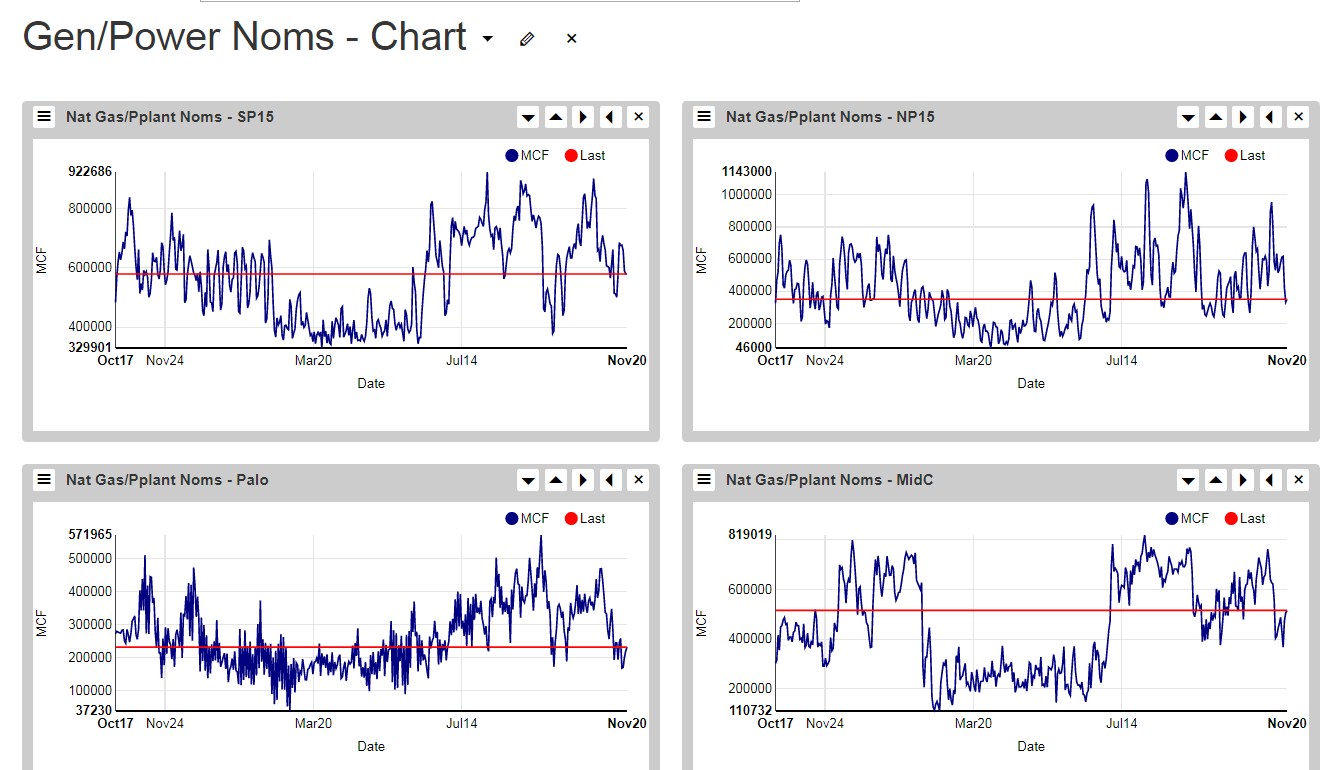 All hubs have seen their gas nominations come off, even the Mid-C’s which were most resilient for so long. NP’s noms look like a bearish spring day, and Palo’s have entered the winter doldrums where they’ll stay till spring. SP  should sport a rally; the question is how big of a bump will they get. Everyone might be surprised by how little they move, what with a rally in hydro energy, the return of the DC, and increased imports. 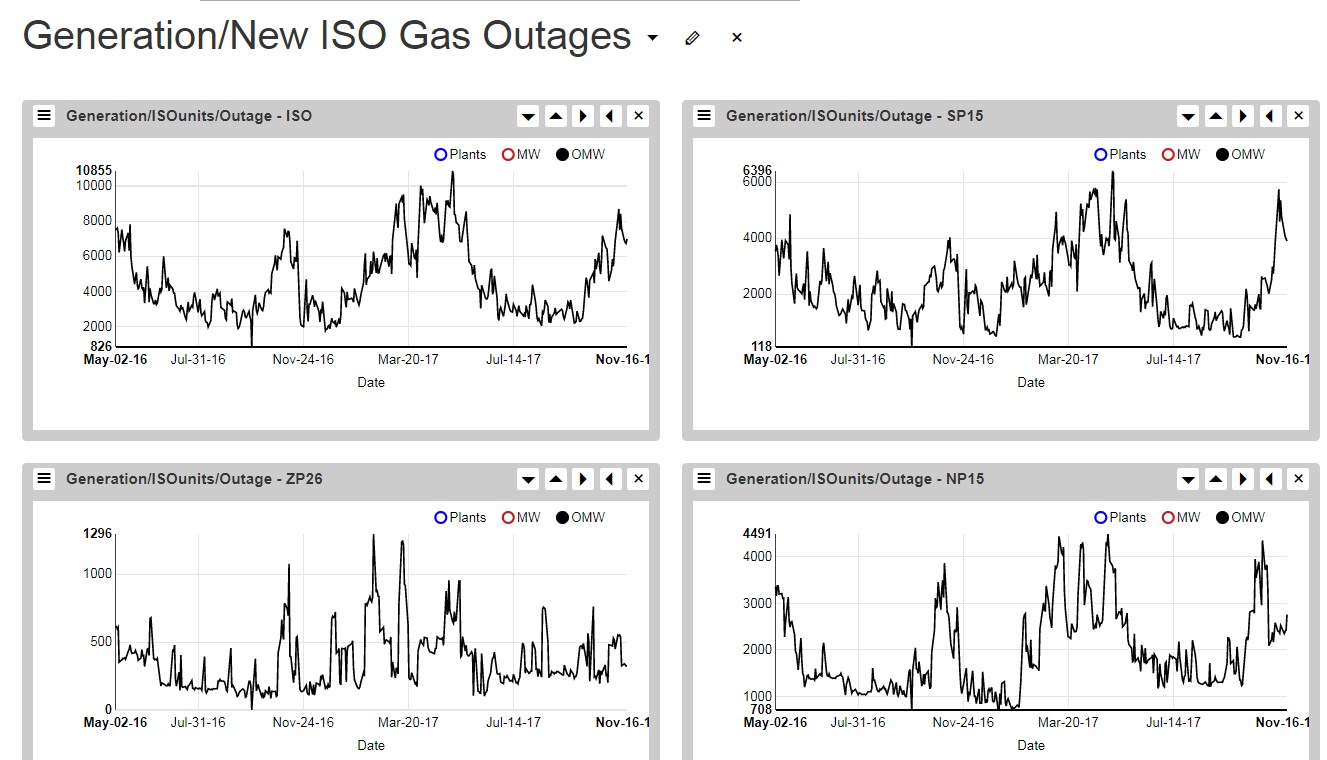 Planned gas maintenance inside the ISO hits its peak last week; now more units are returning to service than not. On top of that, all the nukes are at 100%.

The ISO’s WY17 decay appears to have ended; both On and Off have seen rallies:

Peak energy output surged over the last couple of days off of the significant rain the state realized.  There is another “event” out five days that will trigger another surge; then the ISO goes dry:

These plots are a collection of six USGS stations inside California – note the rallies at all points, but the regulated flows out of Shasta. The state indeed is a big run of river plant, right? Just as these flows find their way into the bay, another storm lands, but not a big one. The cumulative impact of these storms is to put the state into an above average water year: 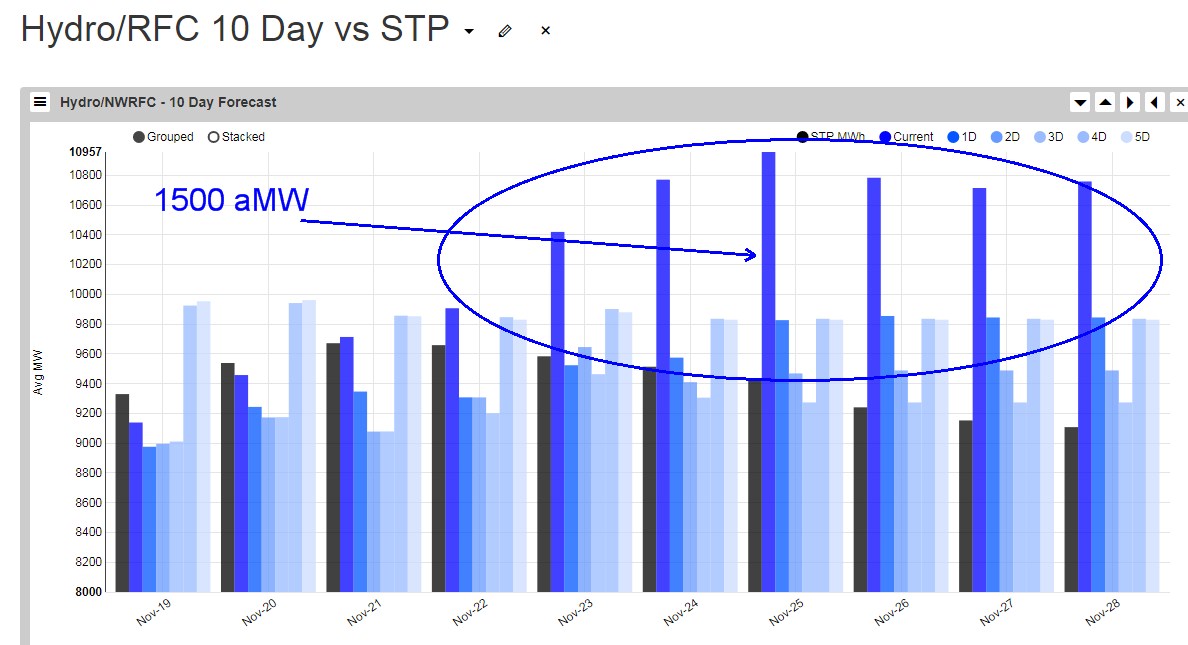 The feds most likely saw this week’s rain, perhaps that is why their forecast rallied. Beyond the ten-day, there are strong hints of a drying out, though back-end forecasts come with low validity.

Capacity outages are off 1000 MW from a week ago, but energy output is down.

Speaking of down, both the USA Northwest and British Columbia reservoirs are below average; not a lot below. That fact is bullish, albeit probably reflects the realization of above average precip and snow for the first seven weeks of WY18:

It’s early in the water year, these anomalies can quickly swing negative with two weeks of dry, but every passing day makes them more relevant.

All of those reservoir anomalies can be explained by Coulee, and just a couple of days of refill can put the pond back to full. Still, the chart is “kind of” bullish.

BPA pulled more water out of Arrow which might explain the RFC’s rally on Friday.

Offsetting the return of the DC line will be a new planned outage on the AC – what giveth is often taken.

BC is back to exporting, impressive that this took place while the Northwest was generating four gigs of wind.  While that took place, the AC went unused in a big way over the weekend, all of which shows how bearish the ISO was. Palo, meanwhile, is begging the ISO to take its energy at any price, exports are up week on week.

LA may set late November records for high temperatures; the question is: will SP15 also approach LMP highs? Our gut says it won’t, mainly because all of the outside hubs are so bearish, but the hype is bullish, and prices are not often set off of rational fundamentals, like a production cost model sets them, and so there very well could be irrational exuberance at SP15 this week. We’d be cautious about shorts there for that very reason; instead, we’d use the anomaly to get a better price on Wed or Thursday.

More on all of that when we release the APT-FRONT post later this morning.