It’s Thursday; we do the back of the curve on that day. Let’s start with the highest ranked opportunities:

In this view, APT is sorted by Rank Ascending, which puts the best-ranked products at the top. We not only look at Rank but also the change in Rank (WoW). If the WoW is low it means the market hasn’t moved much and we probably reported on the opportunity in an earlier post; big WoWs implies a change and warrant a closer examination. The highlighted PIDs (Product IDs, used for querying history) are discussed below. 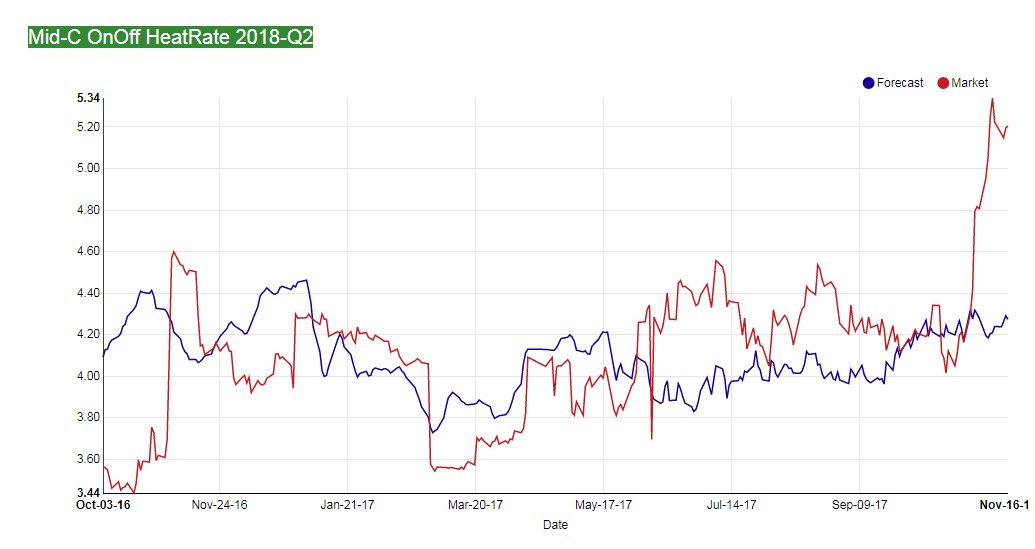 The market loves the MidC Onpeak, or hates the Off (run each TradeRank to see which is the case); we only know the On|Off is off the charts high and has barely come off the contract high that was set last Thursday. APT especially loves slight corrections to tops and bottoms as this implies an imminent correction. Past results don’t necessarily support this cautious approach:

This is a recap of APT’s performance broken out by Sentiment; the “Caution” calls are contract highs|lows while the “Strongs” is just off the highs and lows. Selling the tops and buying the bottoms have both higher win/loss % and margins, but we are conservative and would prefer waiting for a correction before piling on. That more conservative approach is still generating a 65-70% win-loss ratio, whether the recommendation is buying or selling. 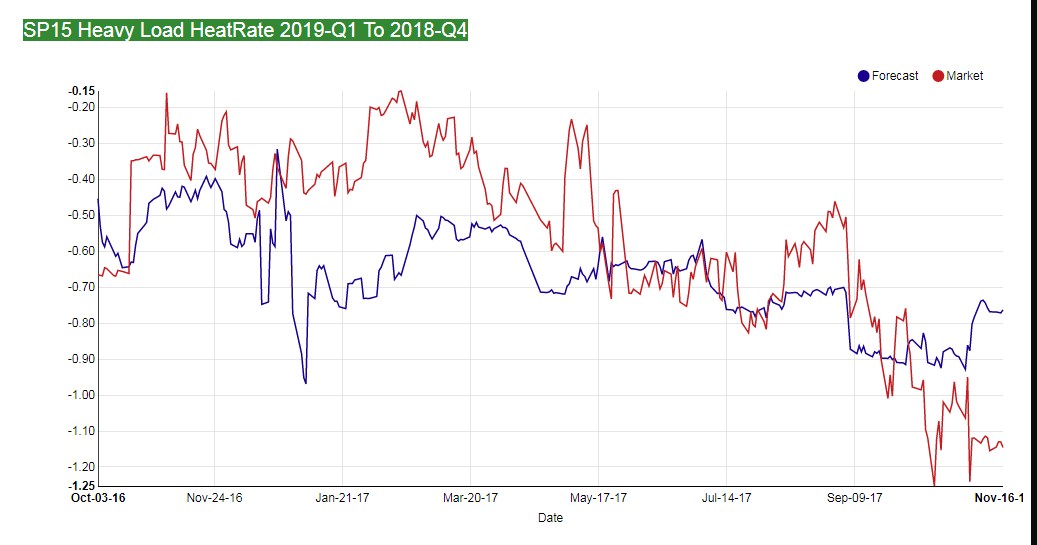 The roll between Q1 and Q4 has been battered of late, driven off of strong 2017 Q4 cash. I’d be cautious about expecting the past to replicate itself into the future; some of the recent cash strength is gas-related. Socal Gas is working feverishly to resolve its supply issues, don’t underestimate the power of a capital budget to fix problems. We’d like to see another contract low before jumping in, but that may not happen given the sharp bounces off both previous lows. 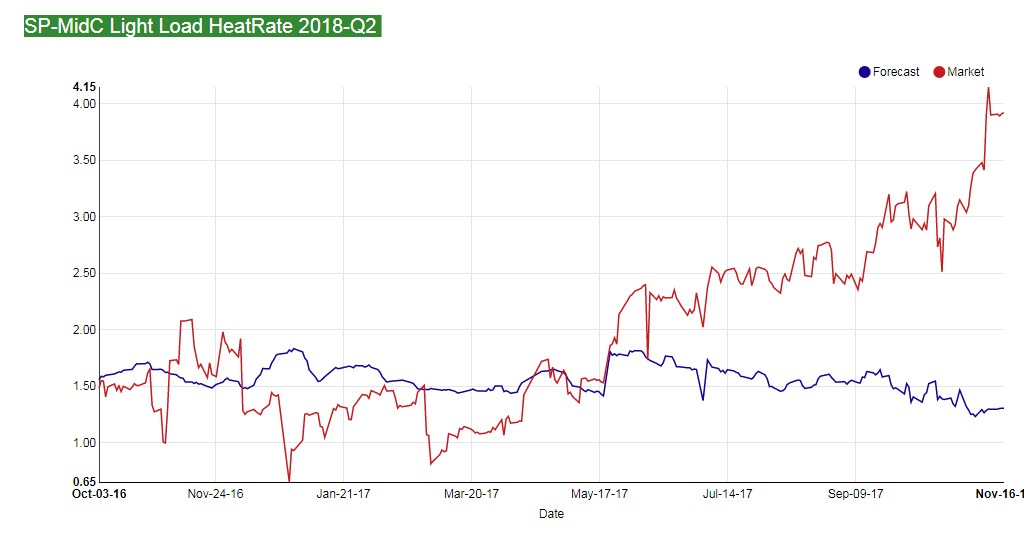 The Q2 spread has blown out to crazy levels, and we think much of this is driven by recent cash spreads. Sure, the Northwest has a positive SWE anomaly today, and should that hold the Q2 Mid-C will be facing some bearish days, but don’t think the ISO will escape winter unscathed, it didn’t last year. Needles outage will get fixed, there is more gas in storage this year than last, and loads didn’t miraculously grow from 17 to 18. The problems we saw last winter at SP will more likely repeat themselves sometime this winter; when that happens, this spread is going to collapse. Or, when the MidC finally gets some frigid weather the same thing will take place – the cash spreads will drop and so shall the term spreads. 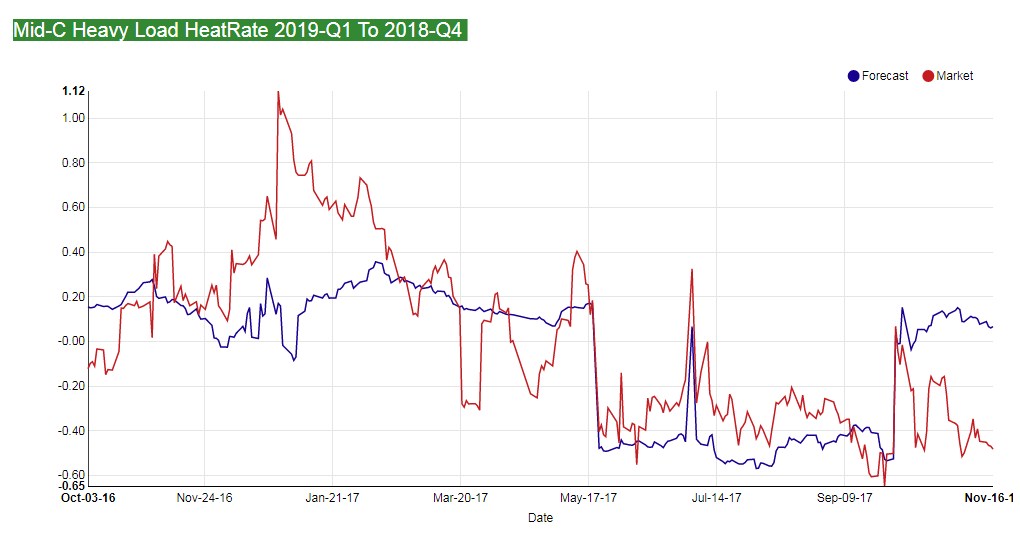 This roll has been on a death spiral since last January; it was battered in sympathy with extremely weak Feb-March 2017 MidC cash — which was driven by massive low-elevation snowmelt. Doubt we see that again, and at some point, we’d expect this roll to recover, but you may need the patience of Job to realize again here. 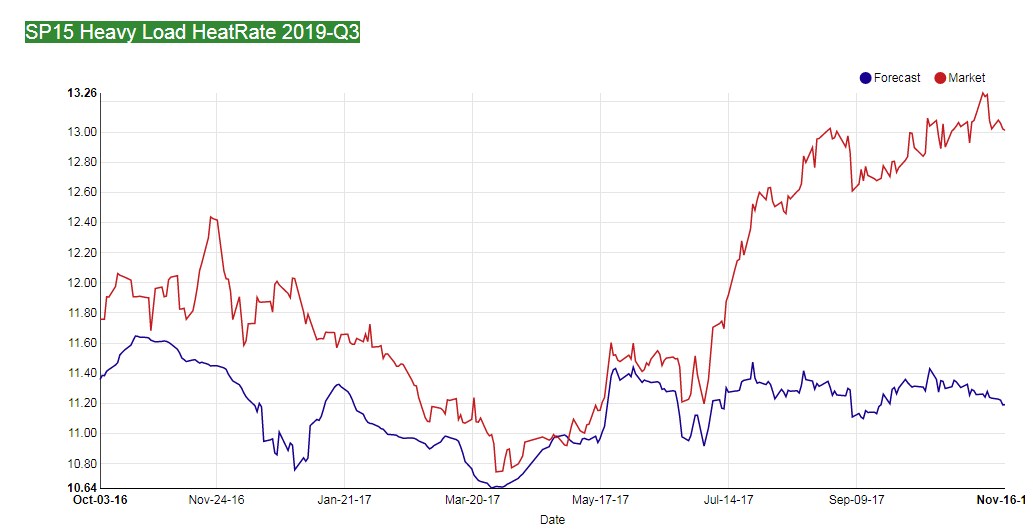 This is so far out in the curve you’d not think cash would impact it much; you’d be wrong. The market felt an SP15 paradigm shift took place this last summer and has put a massive premium on all things SP. A strip of bearish cash will pop this bubble, but those are not coming in the foreseeable future; if anything, SP will rally next week off of the high 80s in LA. We wouldn’t put our shorts on just yet but will be watching this. 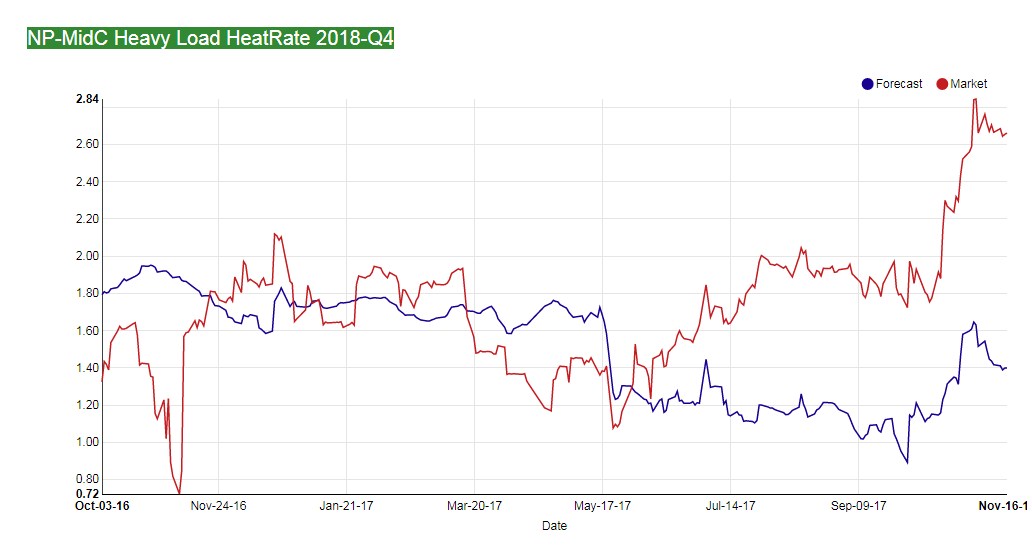 We’ve talked about this spread before, it hit a high and came off a touch, yet there remains a lot of juice left to be squeezed, the question is when SP will feel pain? Not next week, if anything the spread may blow back out off of LA heat.  Offsetting that fundamental is the return of the DC which will tighten cash spreads. Maybe that is the event that drives this down?

Enjoy your weekend. Ansergy will be taking Thursday and Friday off next week.