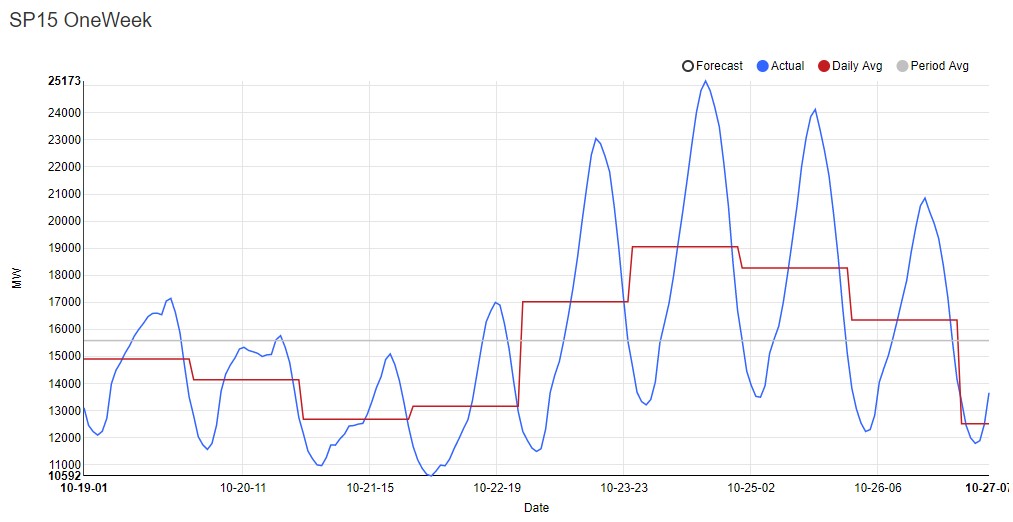 While still comparatively elevated, SP-15 loads came off 3,300 MW day-on-day at their peak, and 1,900 MW in daily average.  Despite the drop, yesterday’s daily average finished up 1,400 MW week-on-week. 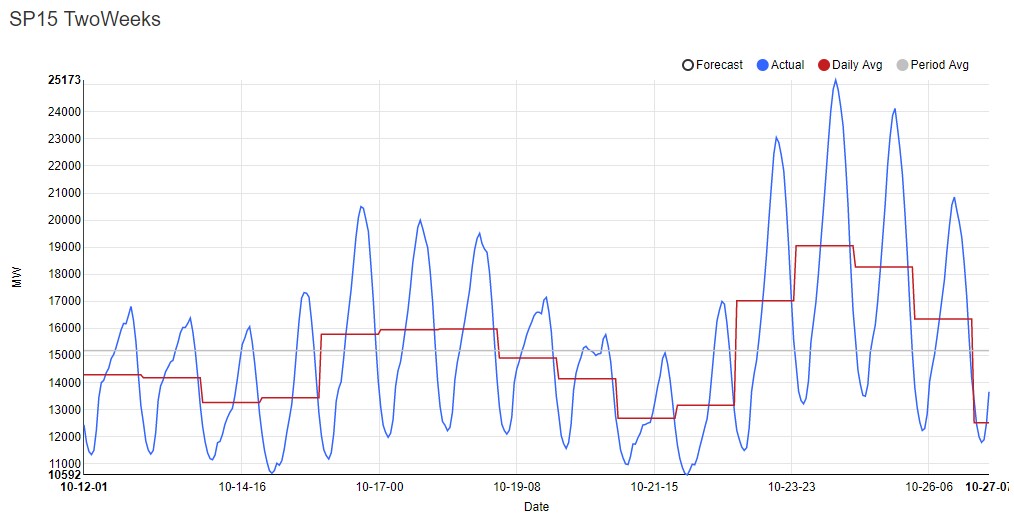 The two-week chart gives more detail in how high this week’s demand reached, where even yesterday’s subdued loads would have been the top day from last week. 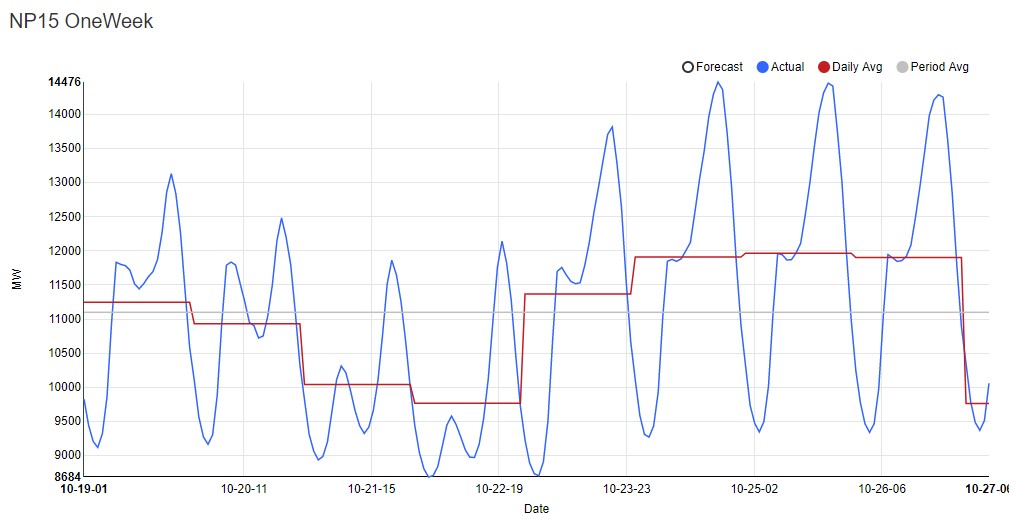 Heavy demand for the fourth consecutive day in NP-15 as loads topped out at 14,290 yesterday evening.  This peak was up 1,150 MW week-on-week, though down slightly from Tuesday’s high of 14,476 MW.  Light loads remained relatively unchanged at 9,368 earlier today. 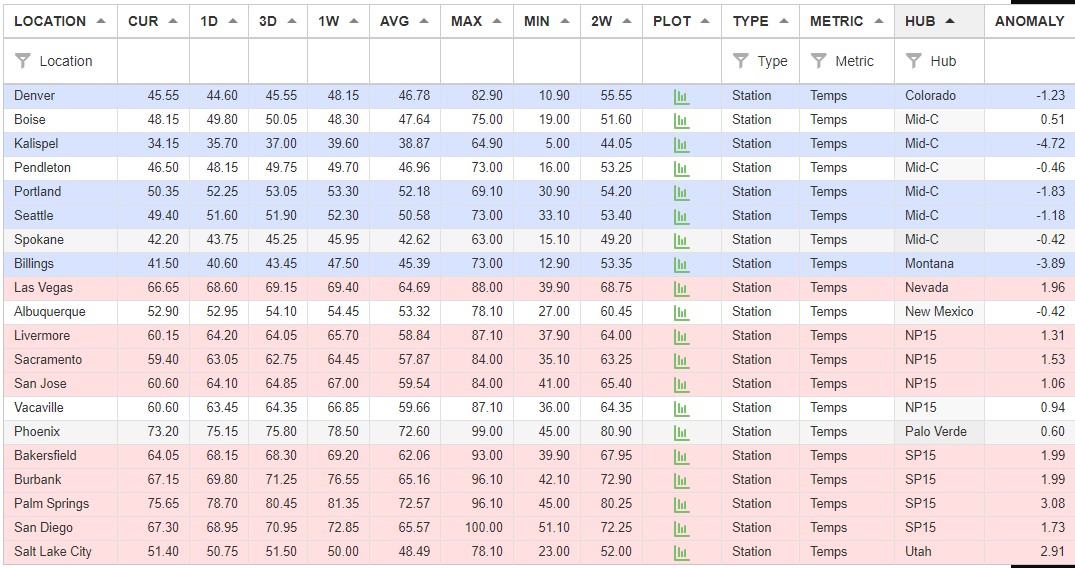 Slight shift in the forecast as Mid-C and Colorado begins to cool down, particularly in Montana where Kalispell shows up with more than a four degree cooling anomaly.  SP-15 should retain a bit more of its heat, enough to stay positive in the 10-day aggregate anyway, as Burbank and San Diego each push north of 1.5 degrees.

Just a couple more days of well-above normal daily highs for San Jose as today should top out at 88, 17 degrees above normal.  Look out for a dip below normal on the 30th as highs fail to reach above 70.  Another cooling period is on the horizon at the beginning of November as well, particularly on the 4th where temps fall six degrees below normal.

Two more days in the 90s for Burbank as both today and tomorrow forecast a high of 92, 14 degrees above normal and a new 10-year high today if the forecast holds true.  Much like San Jose, however, temps are set to freefall down to the 60’s by the end of the month where Halloween shows a nice high of just 69.

Phoenix’s forecast for next week saw a four-degree reduction across the board as highs fell mostly in line with historical average daily highs.  Despite the drop, the majority of the next three weeks should be spent above normal, especially the first week of November as highs climb ten degrees above average.

Seattle should stay above normal in daily highs through the end of the month, but in a change from yesterday’s forecast, the 3rd and 4th mark a sharp drop in temps as highs fall into the 40s with a high of just 47 on the 3rd.  Tomorrow has potential to reach 65, nine degrees above normal.

Portland’s temperature curve was adjusted steeper than Seattle’s as its highs move from 68 today and fall to 49 by the 3rd.  November is pacing cool as all but one day (the 1st) is forecasted below normal.

Spokane’s minimum temps are pacing to fall well into the 20’s by the beginning of November with multiple days showing a low of 22 degrees.  The majority of the three-week forecast calls for a daily low below freezing.

Denver’s minimum temp forecast increased four degrees today to just break above the freezing mark.  That will be short-lived however as temps will sink into the 20’s over the weekend, dropping as low as 25 by the 30th.  The following week saw four to five degrees added for most days.

Today marks a high in the 10-day River Forecast at 7,841 aMW, as the most recent update calls for the forecast to fall to 6,351 by the end of the 10-days.  Alternatively, STP bottoms out by Halloween and holds steady for the remainder of the period. 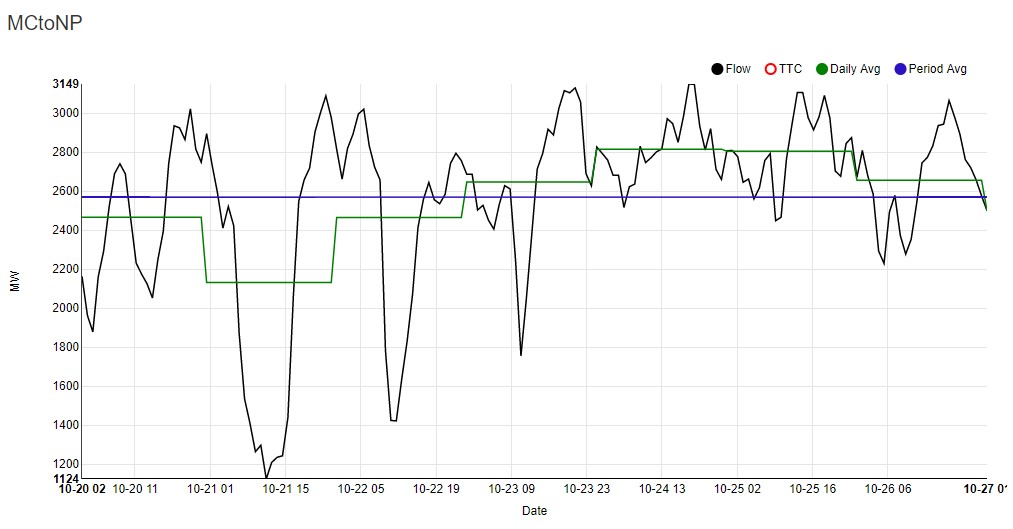 While still above the weekly average, the MC-NP line’s daily average fell by 150 MW day-on-day yesterday, and dipped as low as 2,229 MW in the early morning hours.  Flow peaked at 3,064 MW late yesterday afternoon, the lowest peak in four days. 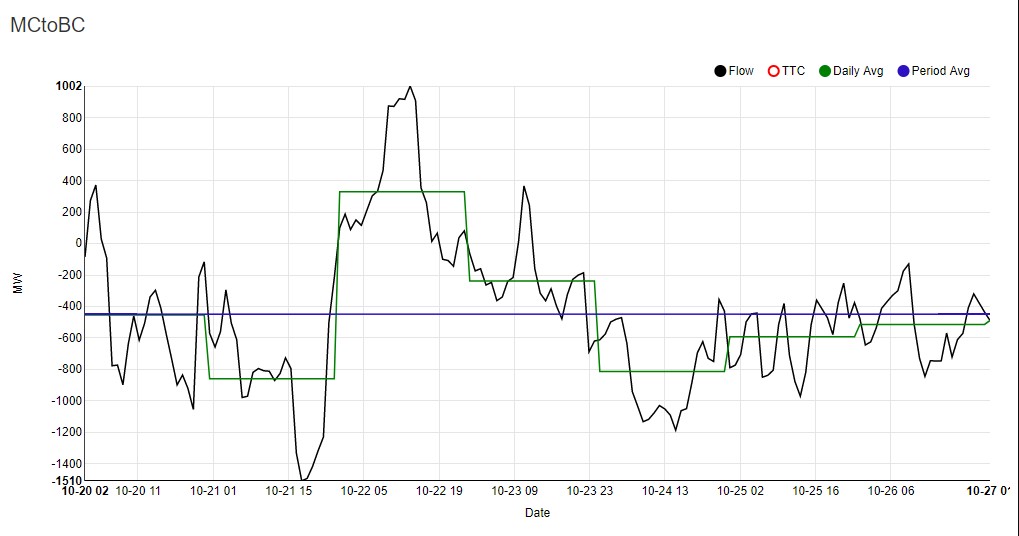 The daily average raised in the MC-BC line yesterday, settling at -514 MW, though that mark still fell short of the weekly average at -449.  Despite the average raising for the second consecutive day, flow failed to peak above 0, hitting just -130 at its highest point.