With the CA heat now relegated to the history books, what is the next hype factor to get the market buzzing? There isn’t anything until it grows cold and that isn’t in the cards, though there are hints of a mini-cooldown in the Northwest. Not a Siberian, but will set seven-month morning demand highs. Before we go to demand, let’s recap cash:

The spreads to both MidC and Palo remain wide despite a pull-back in Cal loads; call that the linger affect, fundamentally the forward-looking ISO is weak, weaker than those heat rates suggest.

Post-solar is peaking in the 60s in the HA, but the HE11 ramp settles a miserly mid-teens; should get even more interesting when the ISO sheds more loads. Offsetting load loss will be a ramp-up in planned outages and the continued decay of California hydro.

The Socal Citygate spread to PG&E has collapsed all the while the power spread hasn’t created a blow-out in the heat rate spread. That too shall pass as the market wakes up. 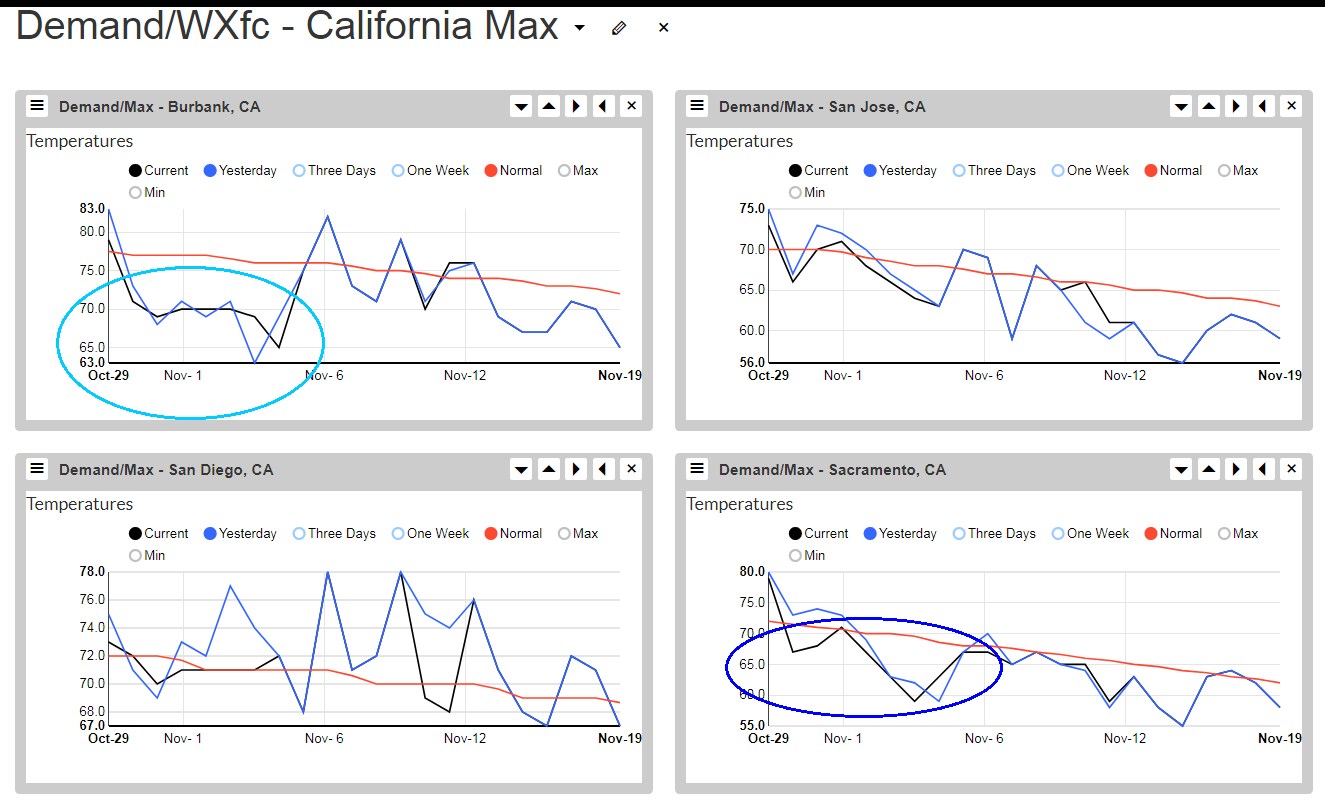 Check out those “highs” at Burbank; a whopping high-60s and a drop of 30 degrees from last week. Should make for a pleasant world series game, though you might want to bring a sweater. 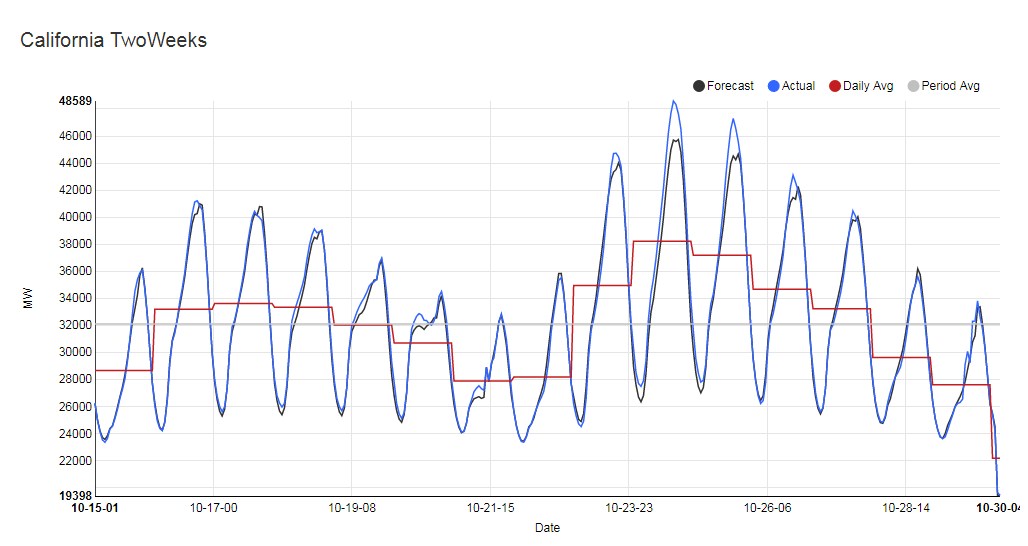 Yesterday’s peak loads were off 15,000 MWs from Tuesday high, but that is a Sunday vs. Tuesday, we’d expect the Tuesday vs. Tuesday to be off about 10,000. 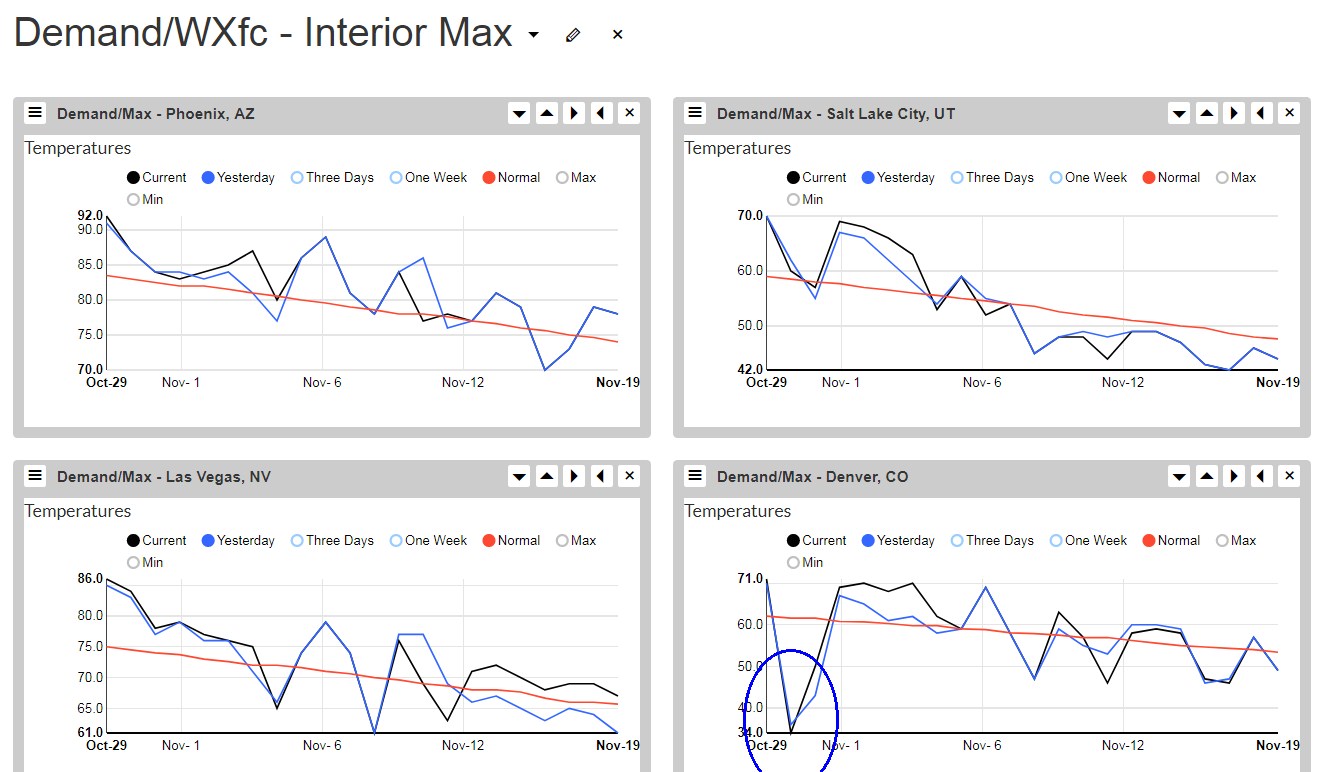 Phoenix, and Las Vegas remain above normal; maybe we need to redefine “Normal” since both cities have been above for about 120 days running. 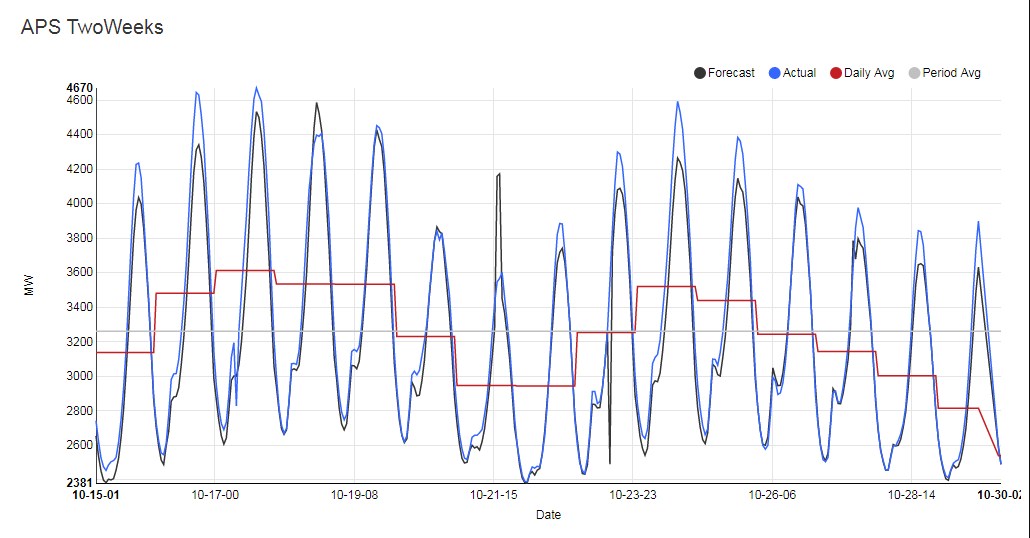 APS’s loads are off, week on week, (Sunday to Sunday) and no surprise given the fall in temperatures; also note the collapse in Thurs-Friday loads versus two weeks back. Palo is rapidly shedding AC load to be replaced by nothing for a few weeks, per the above forecast. 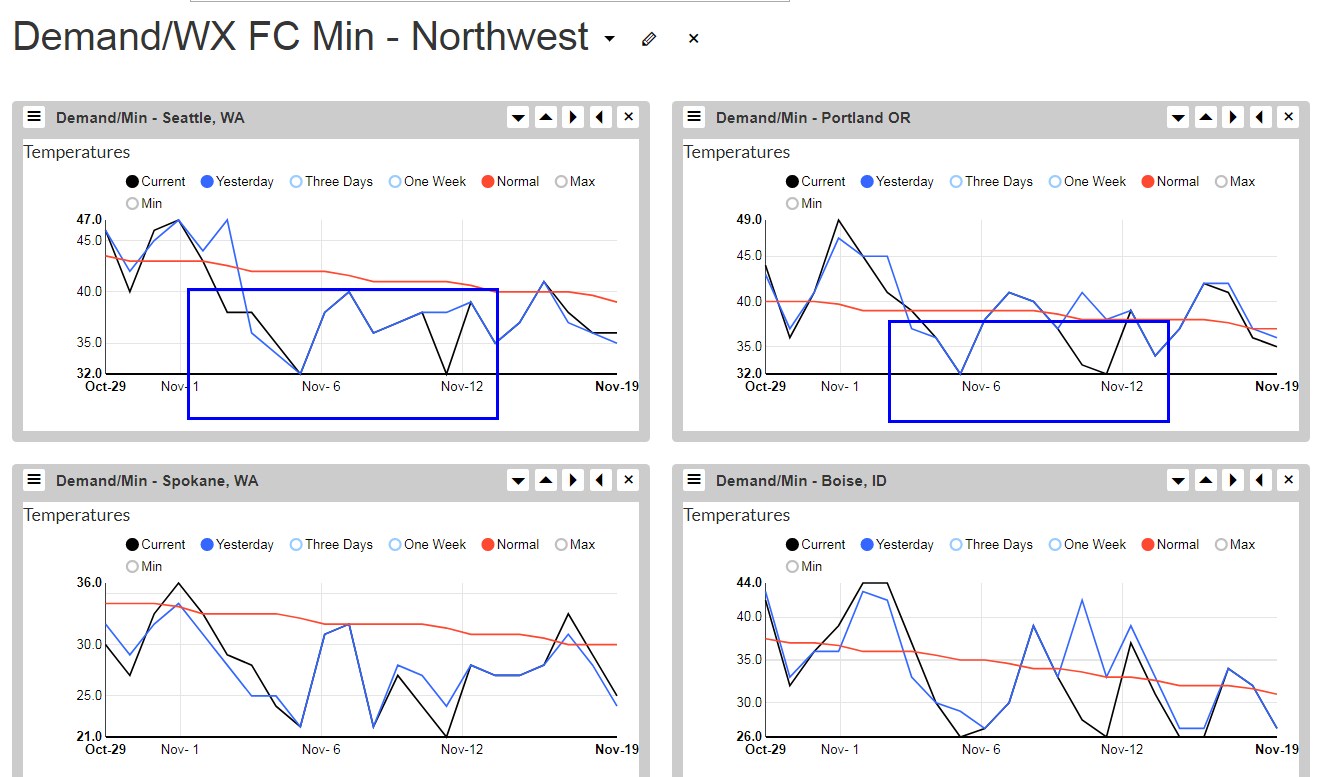 The Northwest preempts both the ISO and Palo with its first hints of winter. Both Portland and Seattle are going to be downright chilly later this week, and the cold lingers. Short spreads, anyone? 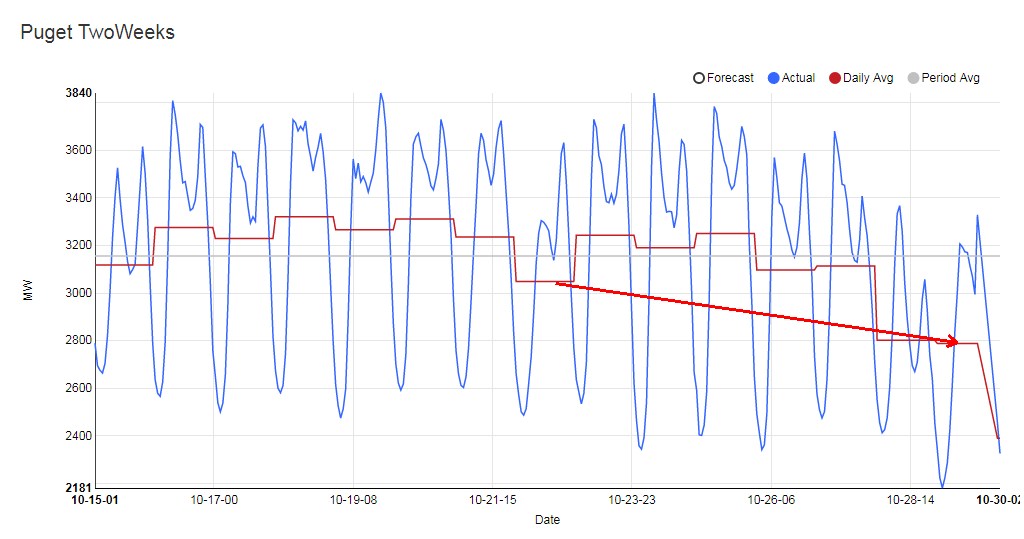 Puget’s loads have puked off of very mild weekend weather but expect the Utility to post seven month morning highs next week. The Northwest, to us, is starting to look increasingly attractive with just a few weeks left in the DC outage and colder weather and below average precip.

Actual temperatures are an excellent way to close out our Demand review. There are no red circles, just blue and light green all of which reflects the mild weekend weather. 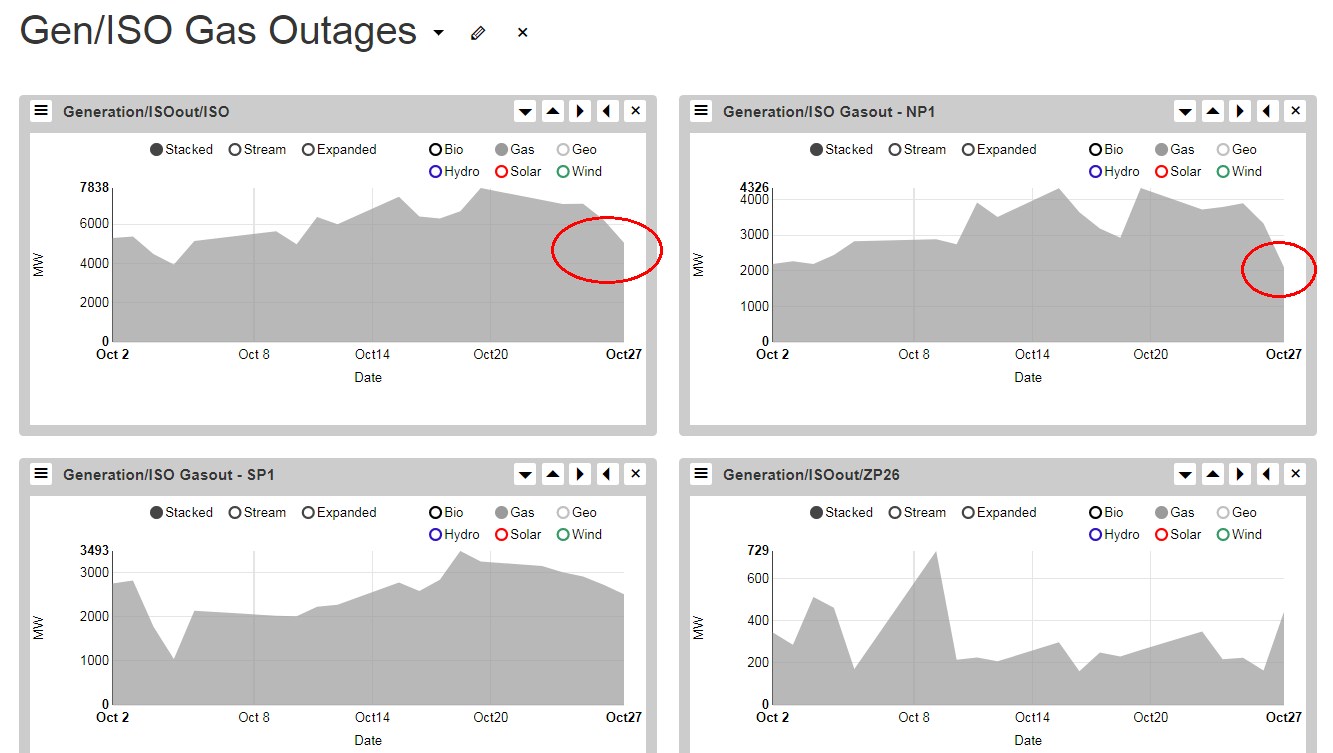 Ironically, as the ISO sheds load it is also dropping gas outages; one would think it would go the other way — one would be wrong. 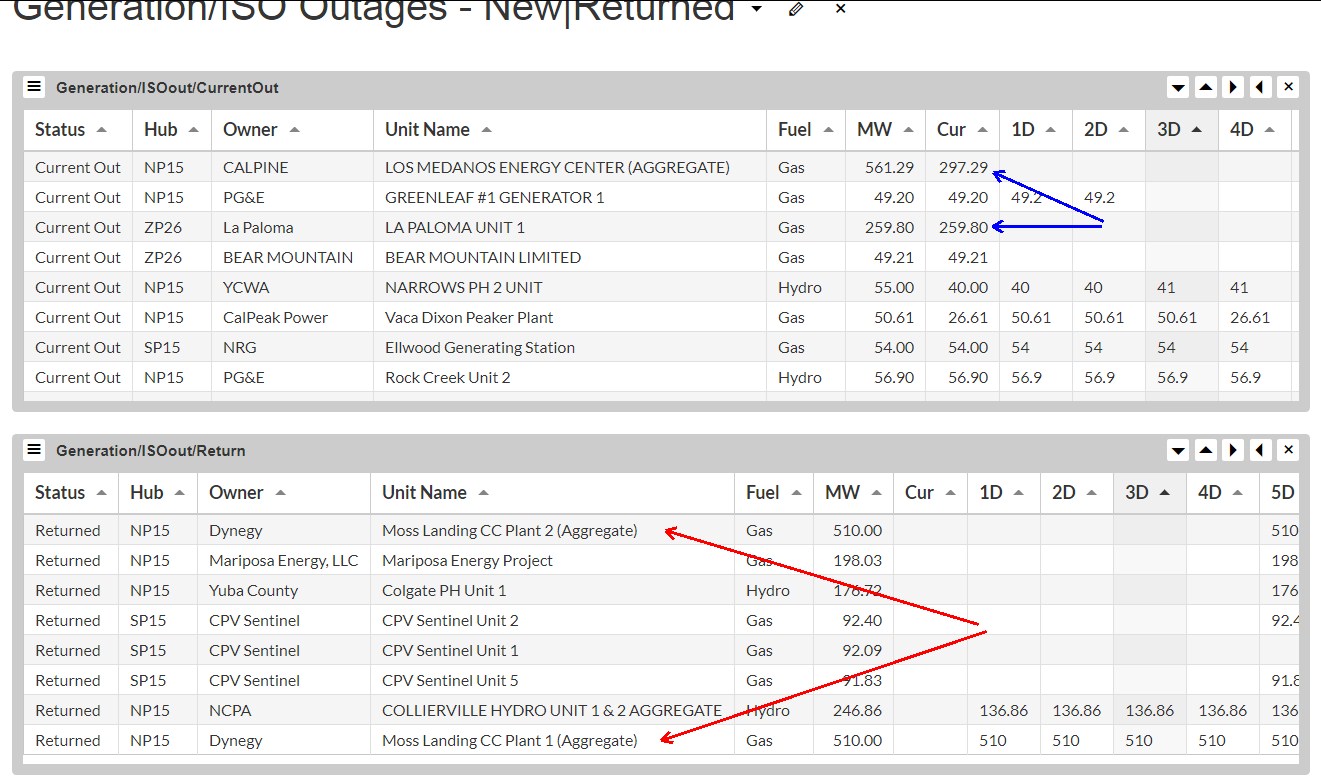 Moss Landing is to blame; both units returned to service. Offsetting those are a couple of new units out. Renewables helped support weekend prices: 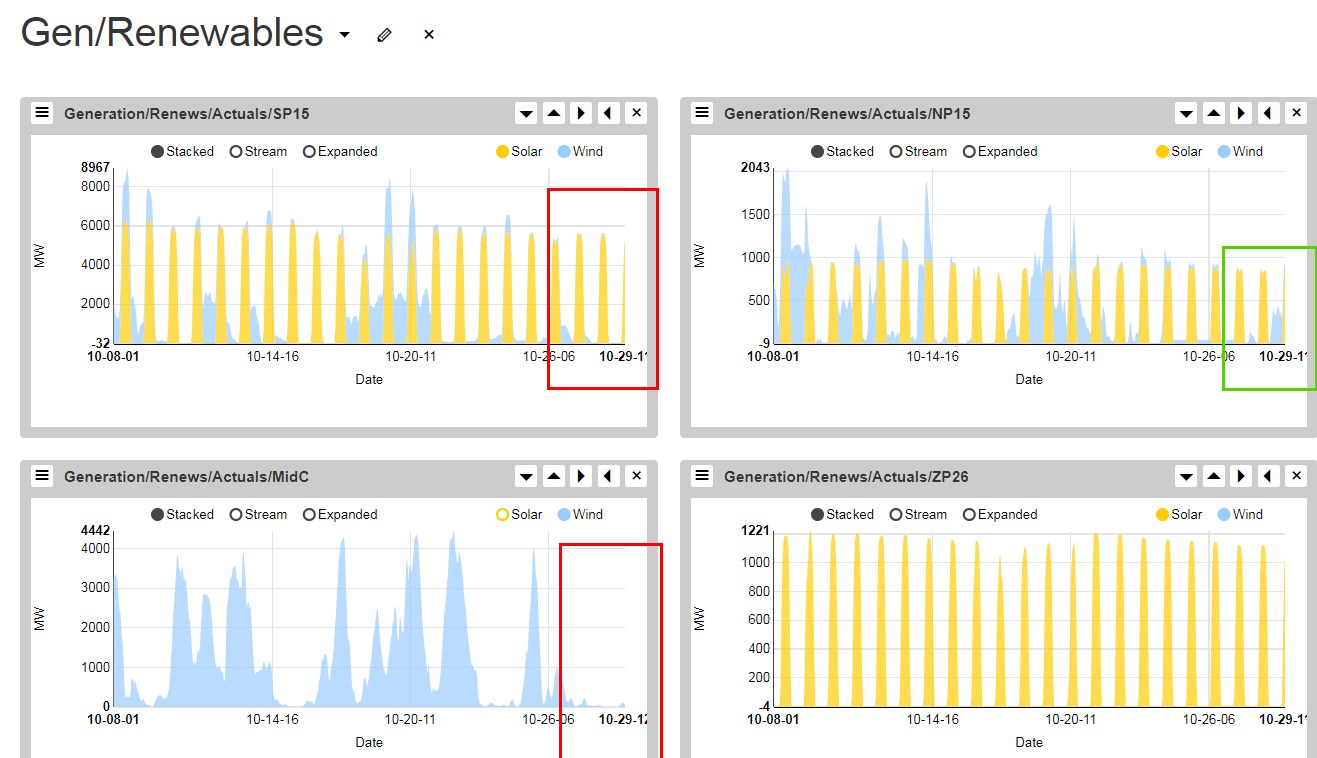 NP saw a smattering of wind generation; the Northwest and SP15 saw nothing, nada. That is a cut of about 3000 MWs from last Sunday; probably just enough to keep things from tanking. 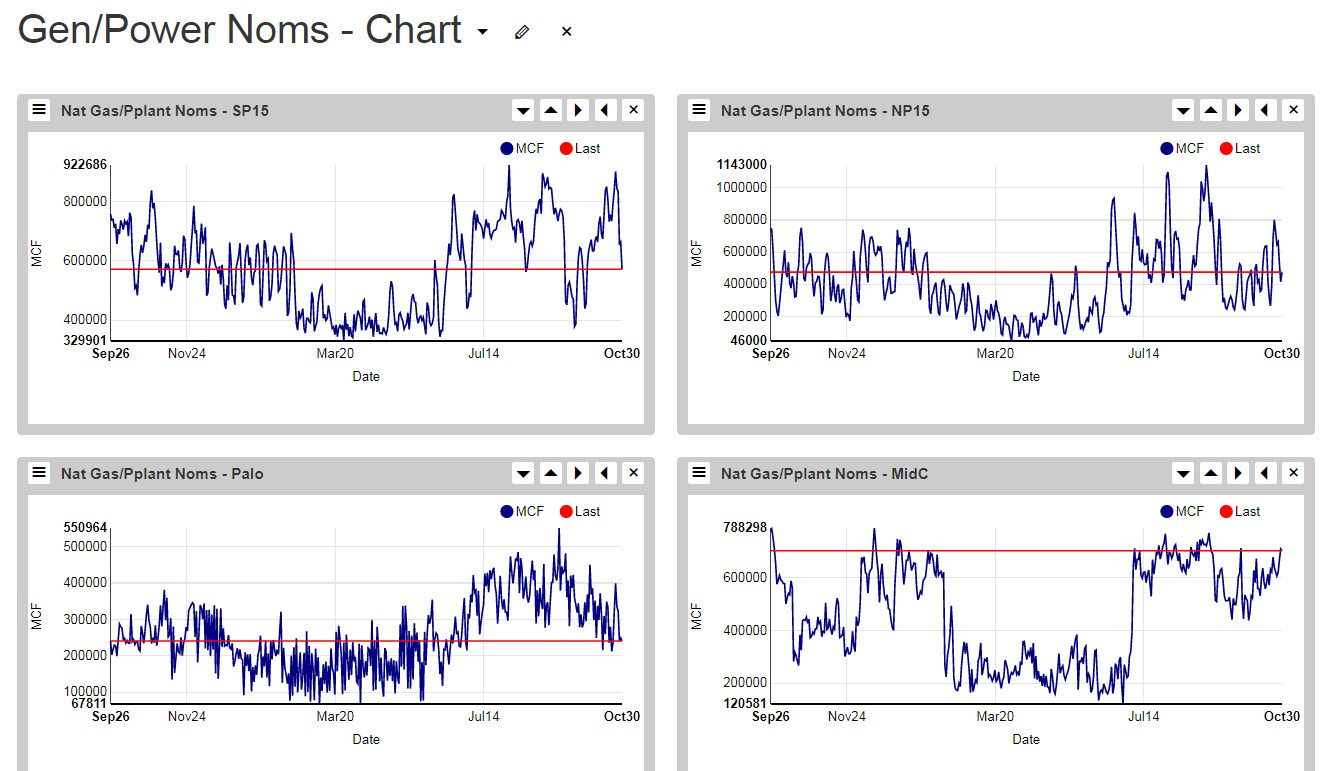 NP and SP are in a free-fall; Palo is poised to collapse too. Yet the MidC continues to rally despite losing 3000 MWs of export capacity (DC). Given cold weather on the near horizon, we’d expect the hub to turn on even more, gas, not that there is much left to turn on: 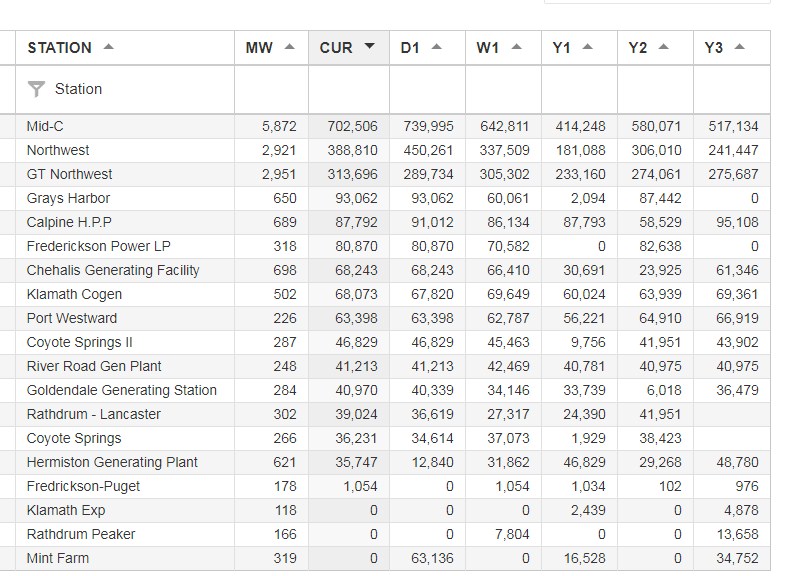 Just the peakers remain, but we need to look to transmission to get the full picture: 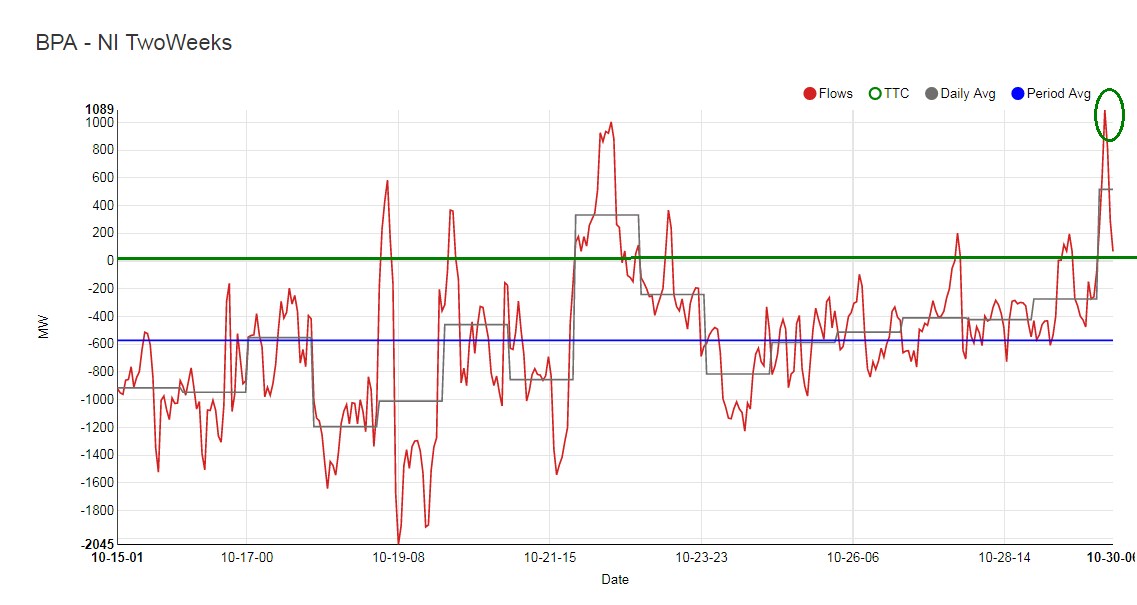 The Canadians were net buyers yesterday, swinging about 1000 aMW from the middle of last week. Doubt that continues given the cooling weather. 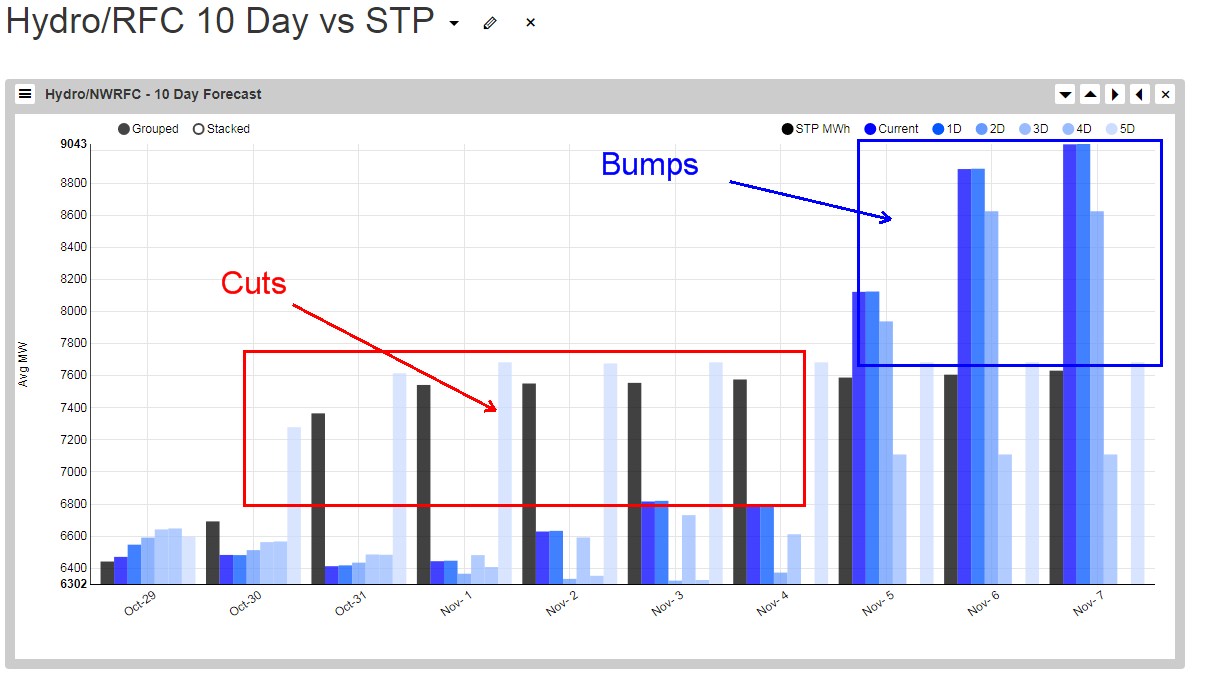 The above plot is a surprise — significant cuts (versus last Monday’s STP) for Bal Week followed by hints of “big hydro.” We suspect those bumps are driven by BPA’s need to generate into the colder weather, not from a change in supply. The Northwest will get a smattering of precipitation, but just about half of normal:

Yet it rains almost every day and that second storm will come down as snow everywhere north of 3000 feet. BPA is ready for this cold weather:

Grand Coulee’s reservoir is like “Fourth of July” full, and they were able to reach those levels without cutting generation.

It didn’t hurt the plant to have 1000 MWs of capacity return over the weekend.

The filling of Lake Roosevelt has almost pushed Mid-C’s total storage back to its five-year average while BC remains slightly above. 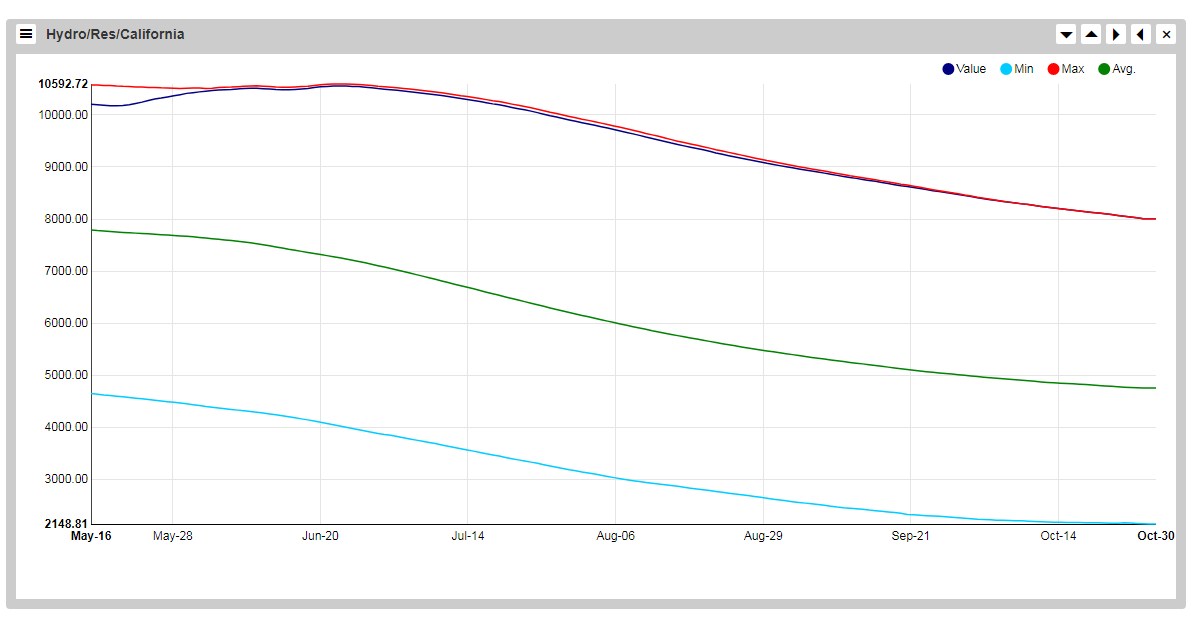 California’s storage is off the charts; every day is setting five-year highs. We thought they might have drafted into last week’s heat, they did a bit, but not enough to dent the reservoir anomalies.

Both HL and LL energy rallied just a touch last week, but both were more sideways than anything else.

The freefall out of WY17 continues, but the ISO is still producing over a 1000 aMW, in both HL and LL, than the four-year average. With a dry outlook, the trend will continue:

Recall last year at this time Lake Tahoe received 10″ of precip, now that station will be lucky to get an inch.

The above is a set of streamflow charts for Northwest west-side projects. We posted this dashboard to show the impact of the significant rain event from two weeks ago; now all three rivers are back to normal.

It’s a new water year, and Snow will make or break everyone’s PnL this year. It is way too early to make a bet off of an anomaly, but not too early to keep an eye on those. The above is a recap of Snow Water Equivalent % of Normal for most of WECC’s hydro production. We’ll be referencing this set of tables frequently over the next six months; for now, they show big anomalies only because it is so early in the water year.

These two charts compare Ansergy’s internal water supply forecast with the NWRFC – both are in sync, no surprises.

We already discussed the Northern Intertie; the AC continues to bounce off of TTC though the large cuts in flows on HE12 yesterday were dramatic and spoke to future issues with the ISO intra-day markets. Even the MidC with no loads and a DC offline could not get the ISO to buy its energy on HE12 which speaks volumes to Supply|Demand issues during the solar ramp. We think this is just a foretaste of things to come and at some point, these hours are going to clear negative, just like they did last year.

We don’t like the ISO, nor Palo for that matter, but are growing increasingly enamored with the Mid-C. However, all things are relative, and in markets one’s outlook must be referenced in terms of price, and in a subsequent post today we will take a look at WECC front-end prices.