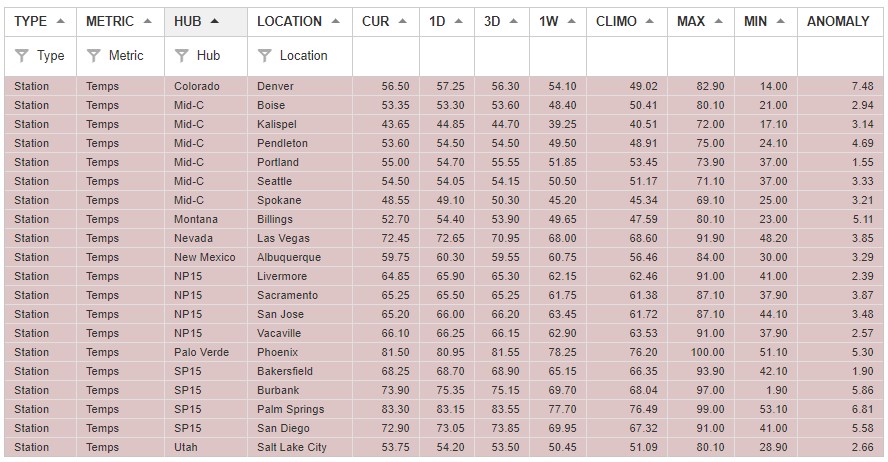 It’s warm across the board, a rare sight for October, as most stations show a two to three degree anomaly over the next ten days.  SP15 leads the way as San Diego and Burbank are both expecting more than 5.5 degrees above average, while NP15 and Mid-C are bit more muted though remain above normal. 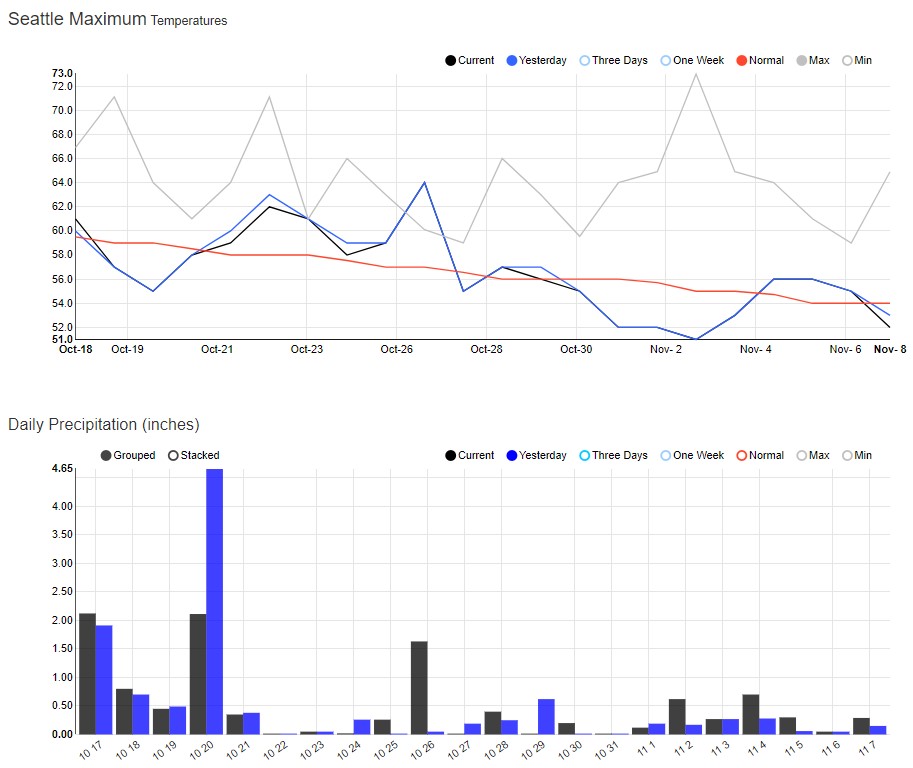 Seattle shows up with a few interesting notes, with the most obvious being the massive amount of precipitation about to hit the area over the next few days, including two inches today, and nearly 5.5″ by Saturday.  Temps are expected to drop four degrees below normal by the weekend, but will warm up soon after as highs jump back into the 60s, eventually peaking at 67 by the 27th. 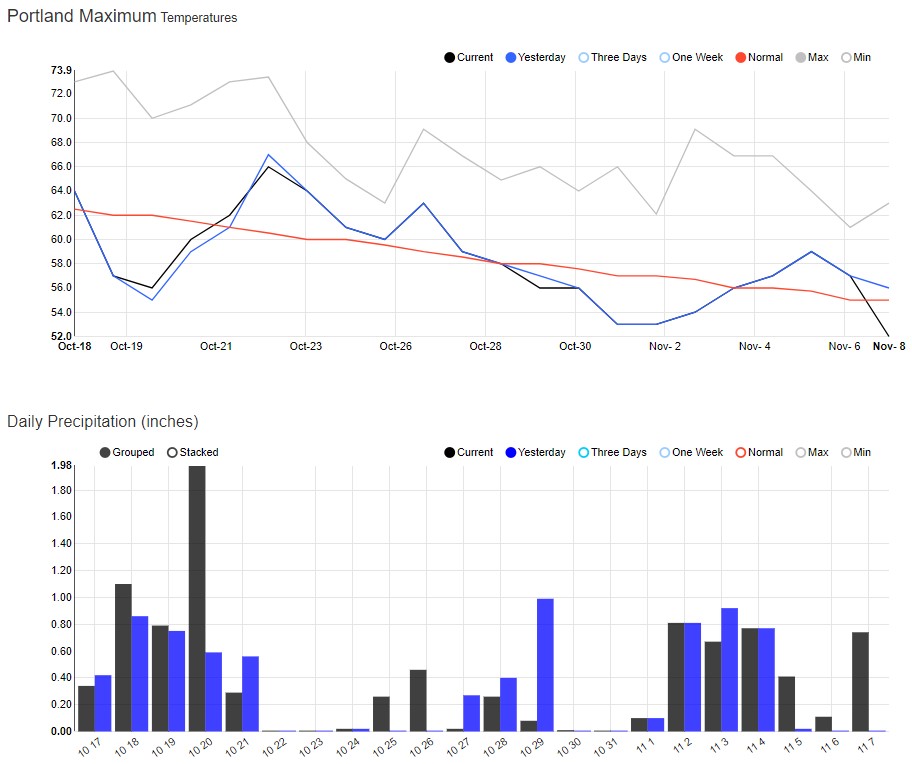 While Seattle’s precipitation forecast was reduced from yesterday, Portland is moving in the opposite direction as more than 1.5″ was added for Saturday, bringing the total rain over the next four days to roughly 4.5″.  Temps should follow a similar path as Seattle.  Highs will drop four degrees below normal by the weekend before warming up next week, culminating in a high of 66 by the 23rd, six degrees above normal. 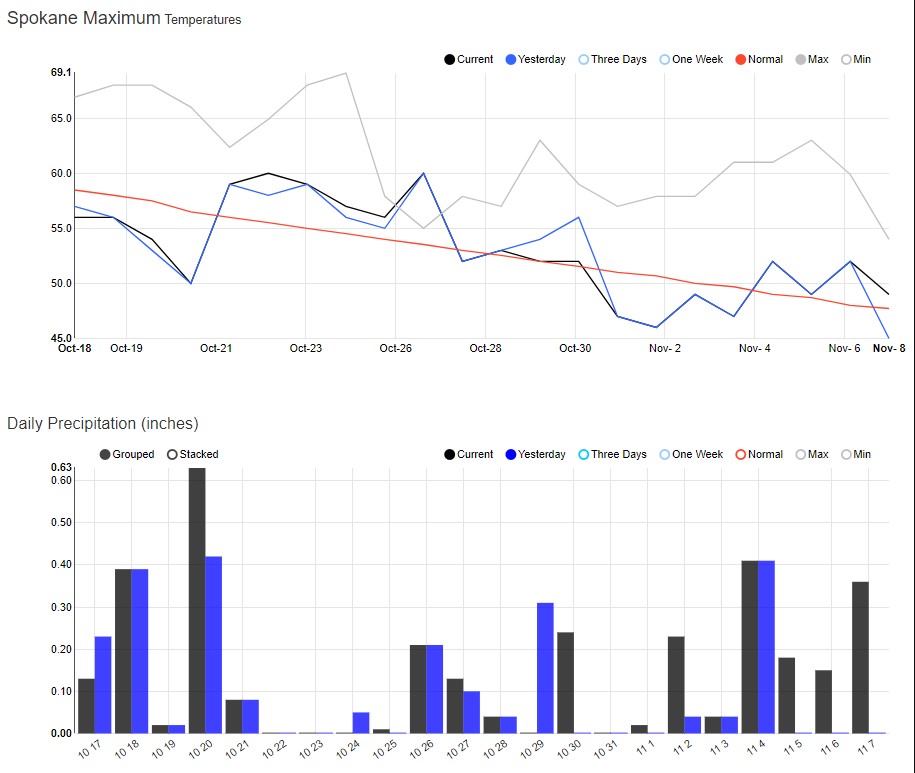 While Spokane’s precipitation is more subdued with just over an inch expected through the weekend, its temperature forecast looks to be more extreme compared to Seattle and Portland.  Highs are expected to fall 6.5 degrees below normal by Saturday, then shoot more than five degrees above normal by the beginning of next week and stay above normal for the following five days.

No precipitation to note for San Jose, just wild swings in daily highs.  Today is set to peak four degrees above normal, but will be followed by a drop to 67, six below average.  The wild ride continues next week as temps soar to 89 by the 24th, 17 degrees above average, and three degrees above the previous 10-year high.  Daily highs are forecasting above normal for much of the 3-week forecast thereafter.

Sacramento will follow a similar temperature pattern as San Jose, though the deviation from average is more extreme in the forefront as temps could drop as much as nine degrees below normal by Saturday.  A new 10-year high is expected on the 25th as temps jump to 86 degrees, 12 degrees above normal.

It’s a return of triple digits for Burbank and much of California as the forecast calls for a high of 101 on the 24th, a massive 24 degrees above normal and six degrees above the previous 10-year high.  It will take a few days to reach that point however as the high will drop below average on the 20th, just reach 77 degrees, two below normal.

Just a single day over the next 21 is forecasted to fall below normal as Phoenix is set to break several days’ 10-year highs, though no triple digits to note.  After today’s high of 98, temps should fall back into the 80s before jumping well into the upper-90s to begin next week.

Las Vegas’ highs are trending slightly cooler than forecasted yesterday, but temps should still reach upward of 13 degrees above normal at the beginning of next week.

As winter slowly approaches we’ll slowly work in minimum temperature charts, as is the case today with Denver.  Today marks a low of just 45, ten degrees above normal.  That anomaly looks to stick around for a while as lows aren’t forecasted to drop below average until the beginning of November.  These abnormally-high lows are affecting the daily average temperature table at a higher rate than the daily highs. 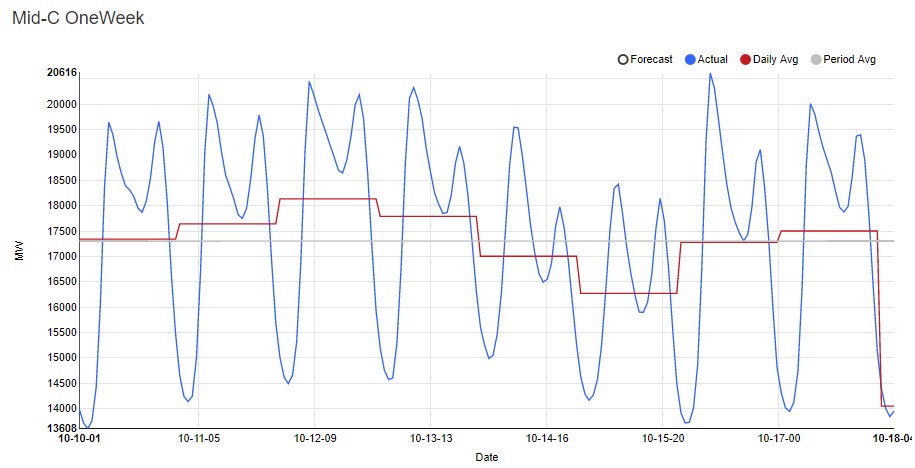 Demand peaked at 20,013 MW yesterday, roughly 600 MW short of Monday.  Despite the day-on-day decrease, loads finished up 170 MW week-on-week in terms of daily average, and up 350 MW at hourly peak demand. 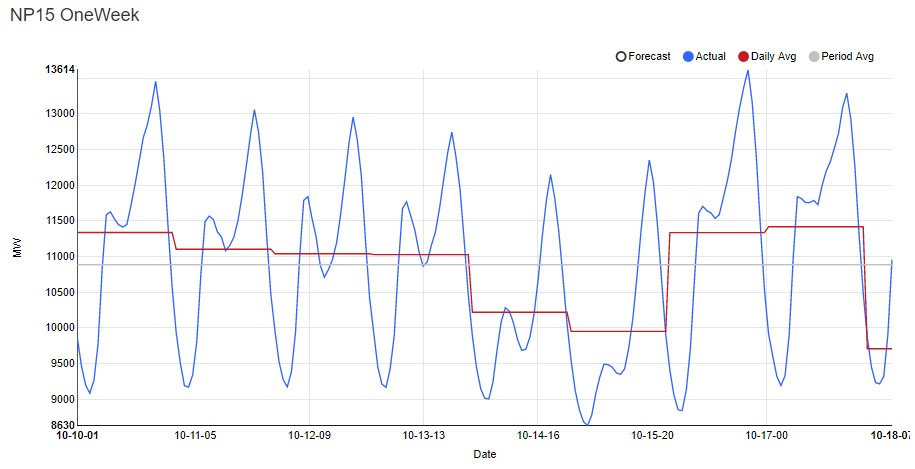 NP-15 grew its daily average by 80 MW day-on-day and week-on-week, finishing yesterday with 11,417 MW.  Despite peak demand falling 350 MW short of Monday, yesterday’s daily average managed to finish up thanks to a heavier light load that bottomed out more than 300 higher than the day before. 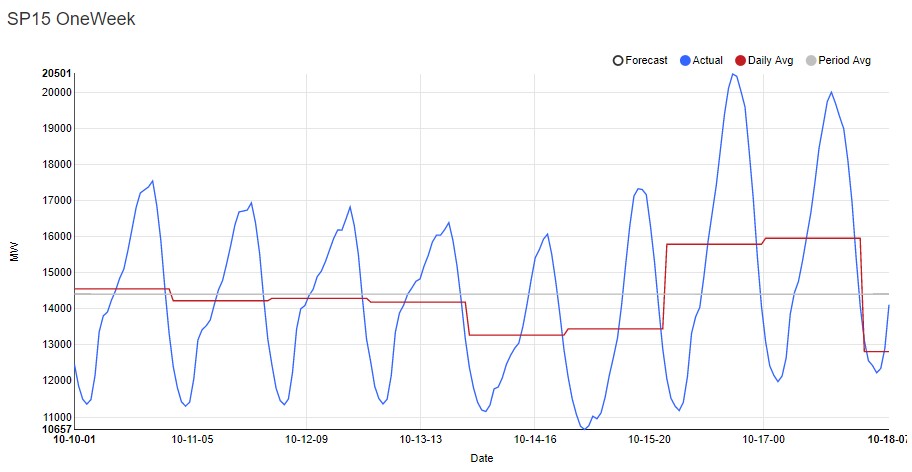 SP-15’s demand remained elevated for the second-consecutive day yesterday as loads peaked at 19,996 MW, more than 2,400 MW higher than peak demand one week prior.  Daily averages finished at 15,952 MW, up 180 MW day-on-day primarily thanks to higher light load demand.

Grand Coulee added nearly a foot of elevation over the past two days, bringing its current level to 1284.2 feet.  This elevation sits comfortably on the average compared to the previous three years.

ISO outages saw more than 1,000 MW of gas return online yesterday, ending the long streak of additional outages, though gas remains elevated compared to all other days of the past three weeks.  Hydro also had 300 MW return, while all other sources remained relatively flat.

The daily average flow increased 90 MW day-on-day yesterday as low-hourly flows dropped below the two-week average just three times.  The lack of low-hourly flow was enough to push the day ahead of all others in the past week. 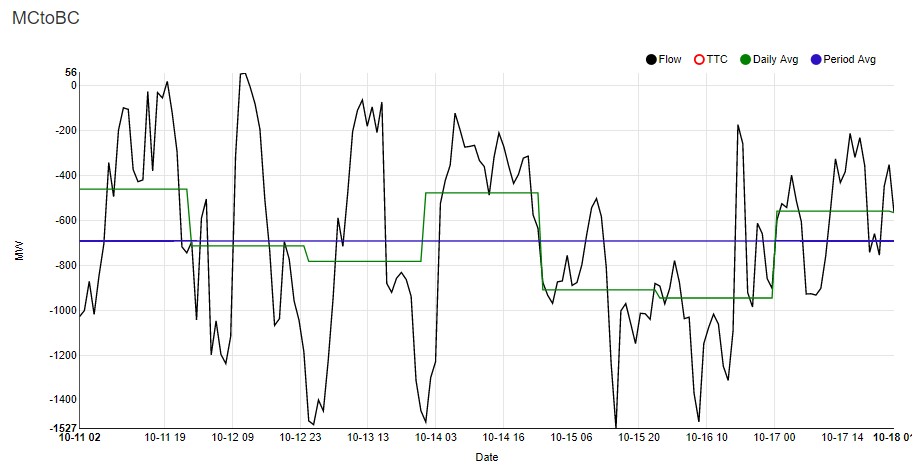 The daily average in MC-BC also rose day-on-day, bringing its total to -559, an increase of nearly 400 MW.  Hourly flows peaked at -213 MW, down 40 MW from yesterday’s peak.  The day-on-day difference in the lowest hourly lows sat at early 550 MW as yesterday never fell below -933 MW.