Many of us are in San Diego, some are unable to see the market as they are either still asleep or the hangovers obscure any vision of anything.  Here is the Ansergy take on the fundamentals that will drive WECC cash for the next week. First, that cash recap: 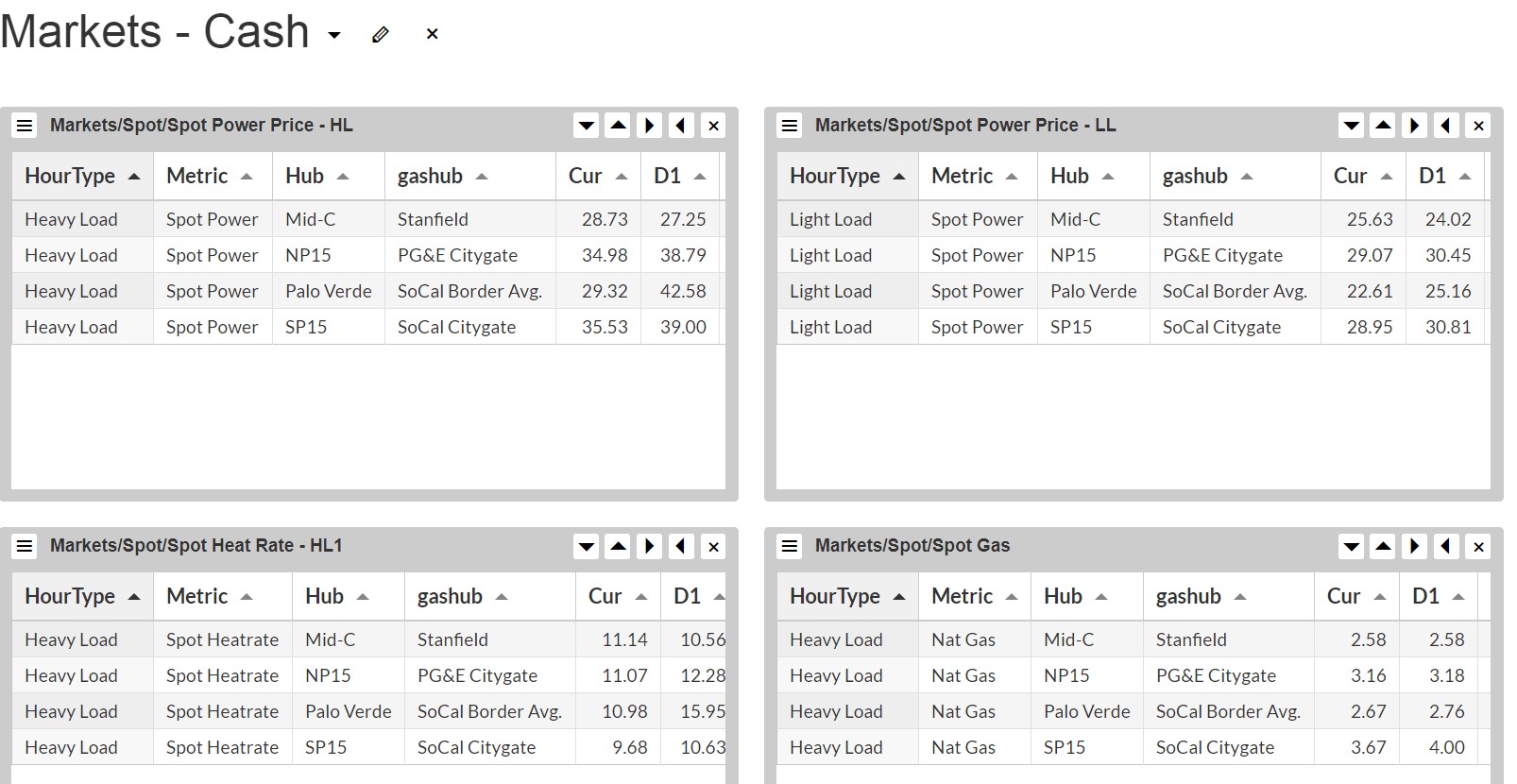 Where earlier, it was all doom and gloom inside SP. Problems with the gas system (Needles, Aliso, CPUC), hot weather, DC down, gas outages, and high prices. Some of that persists, but not the high prices. SP cleared at a bearish 9.68 heat rate and the Socal Citygate premium is not but $0.50/mmbtu.  All because loads have come off because temperatures cooled: 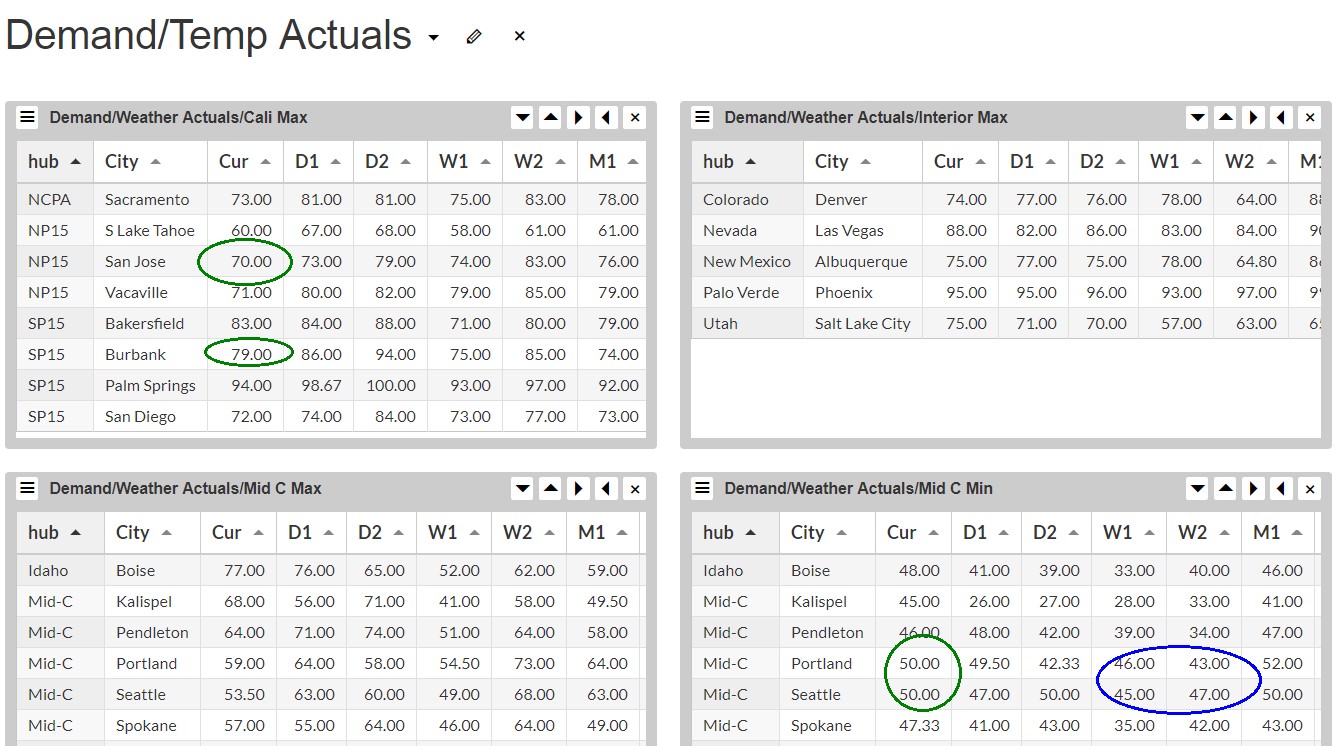 San Jose barely touched 70 while Burbank sports a 70 handle. Even the morning lows in the Northwest have tempered, now they are back in the 50s. Phoenix remains the hottest place in the universe, but its just 95. Next week is different … 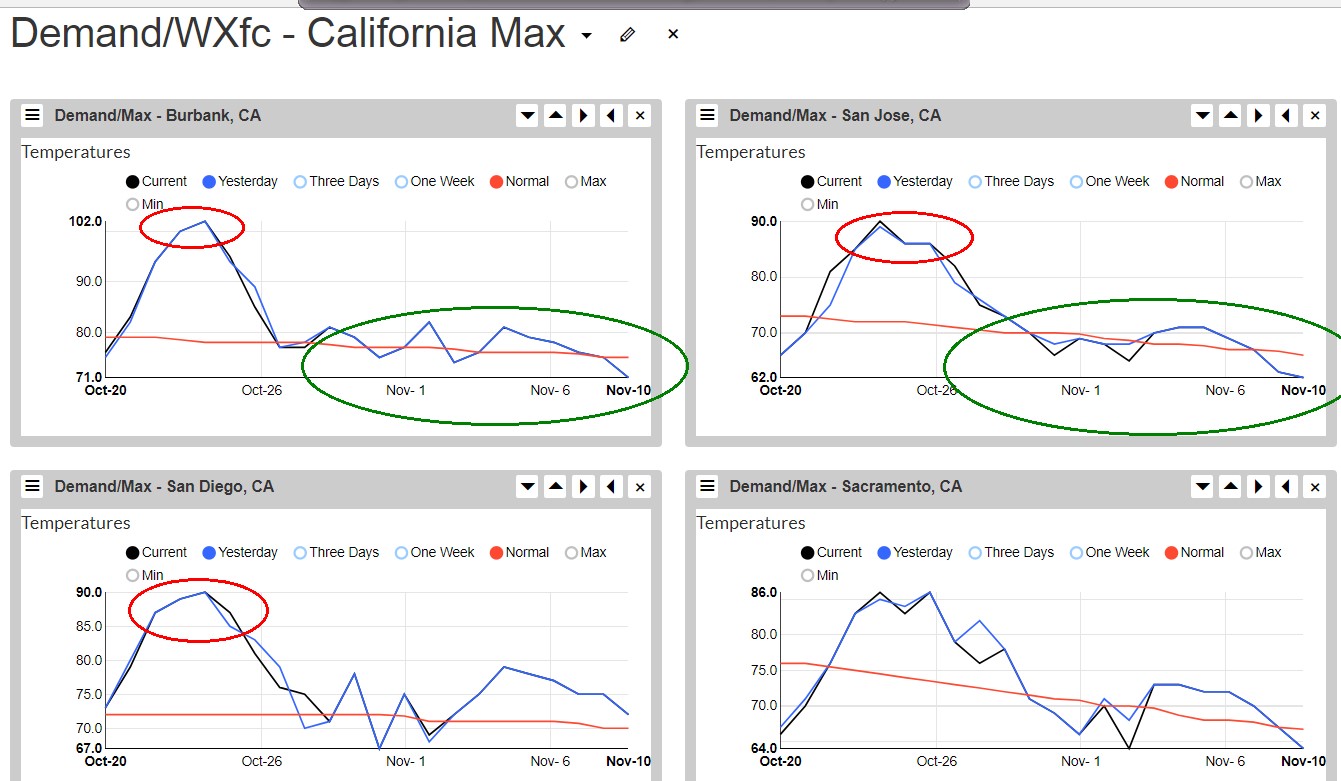 LA is going to roast for several days, so is San Jose and San Diego. The Burbank temperatures will approach records, probably surpass those, on Monday and perhaps Tuesday. All of which is taking place while the DC is down and Cal Hydro is plummeting.

The WY17 hydro energy premium is barely 500 MW today, where last month it was over 1000 aMW.  All of which should set up the entire ISO to post near CY17 highs, one would think. 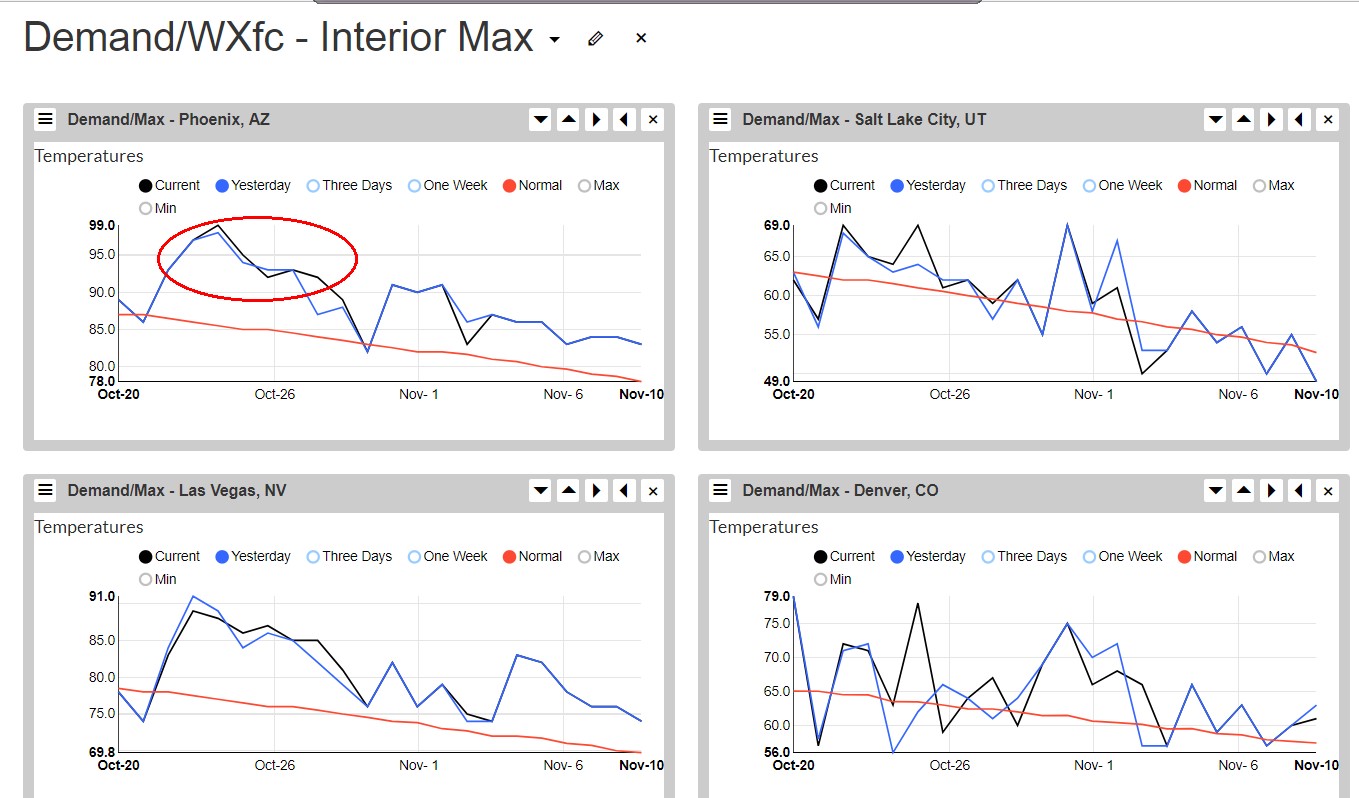 The Southwest stays hot, not like summer heat, but well above normals. The Northwest doesn’t: 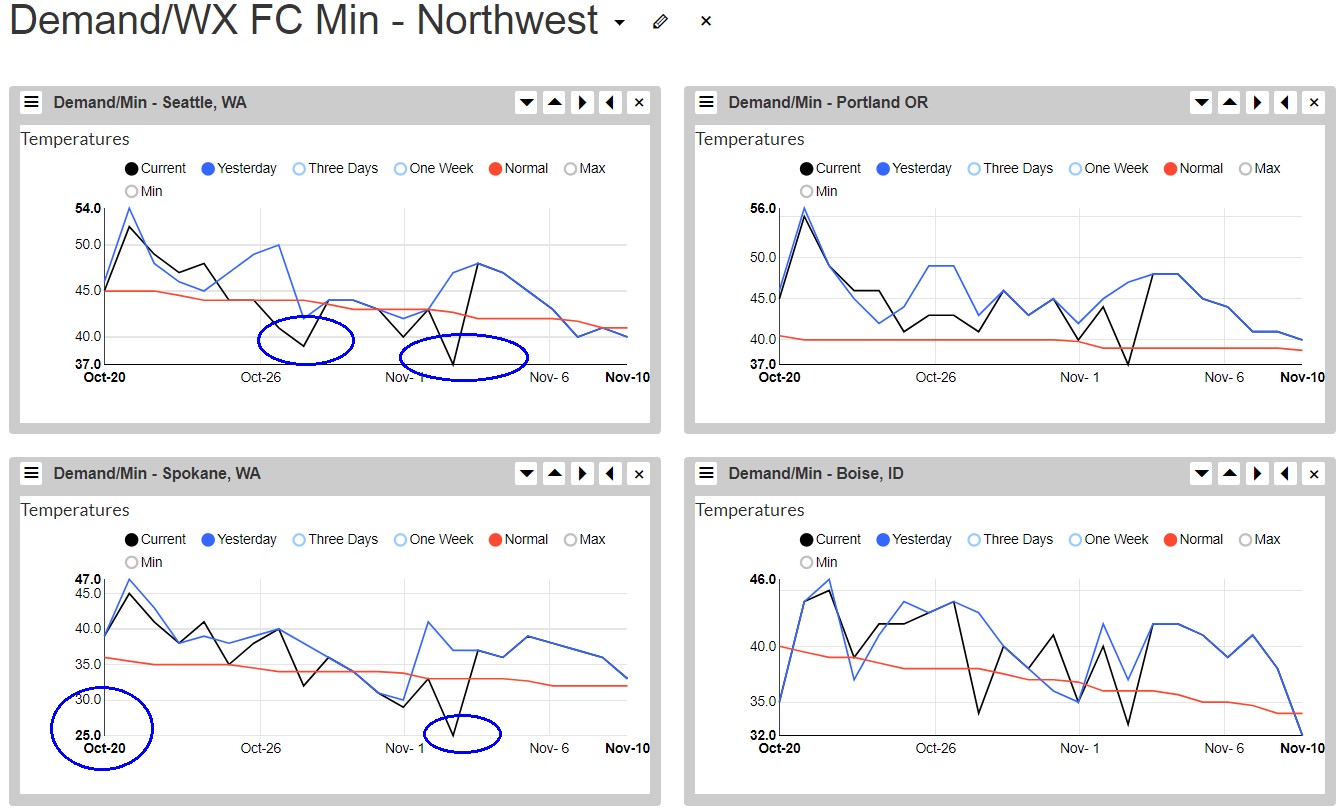 Temperatures there, the Northwest, are slightly above normal but later, in week two, we see the first signs of “cold” weather in the Seattle-Portland load centers; both have a few days with lows touching the 30s. We’ll be watching to see if those build, hold, or fade. 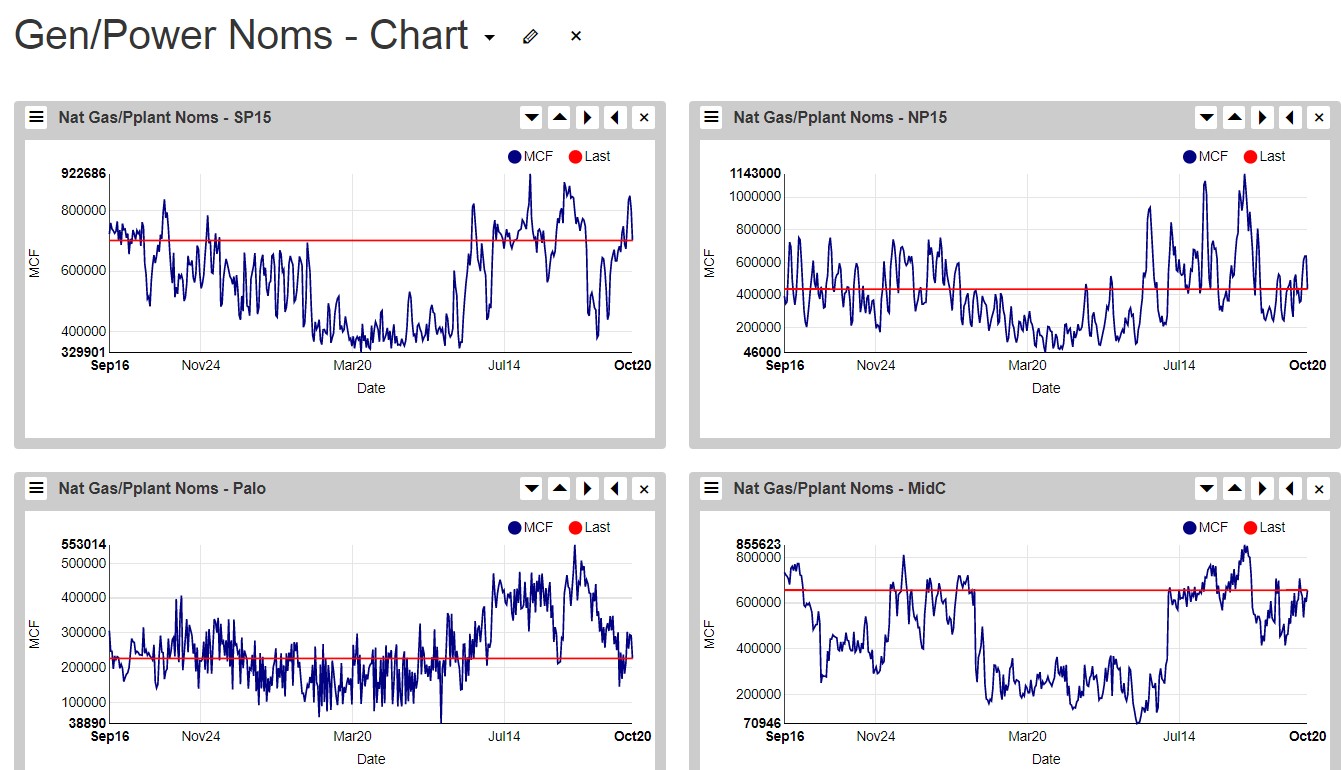 Both ISO hubs have seen noms come off, but those should rally hard to serve the Monday-Tuesday loads. PV noms are way off and refect those mid-90s while MidC noms are still at summer highs, driven there by relatively tight water. We would have expected a sharper drop once the DC went down, something had to absorb that loss of 3000 MWs, and it certainly wasn’t loads, those are off week on week: 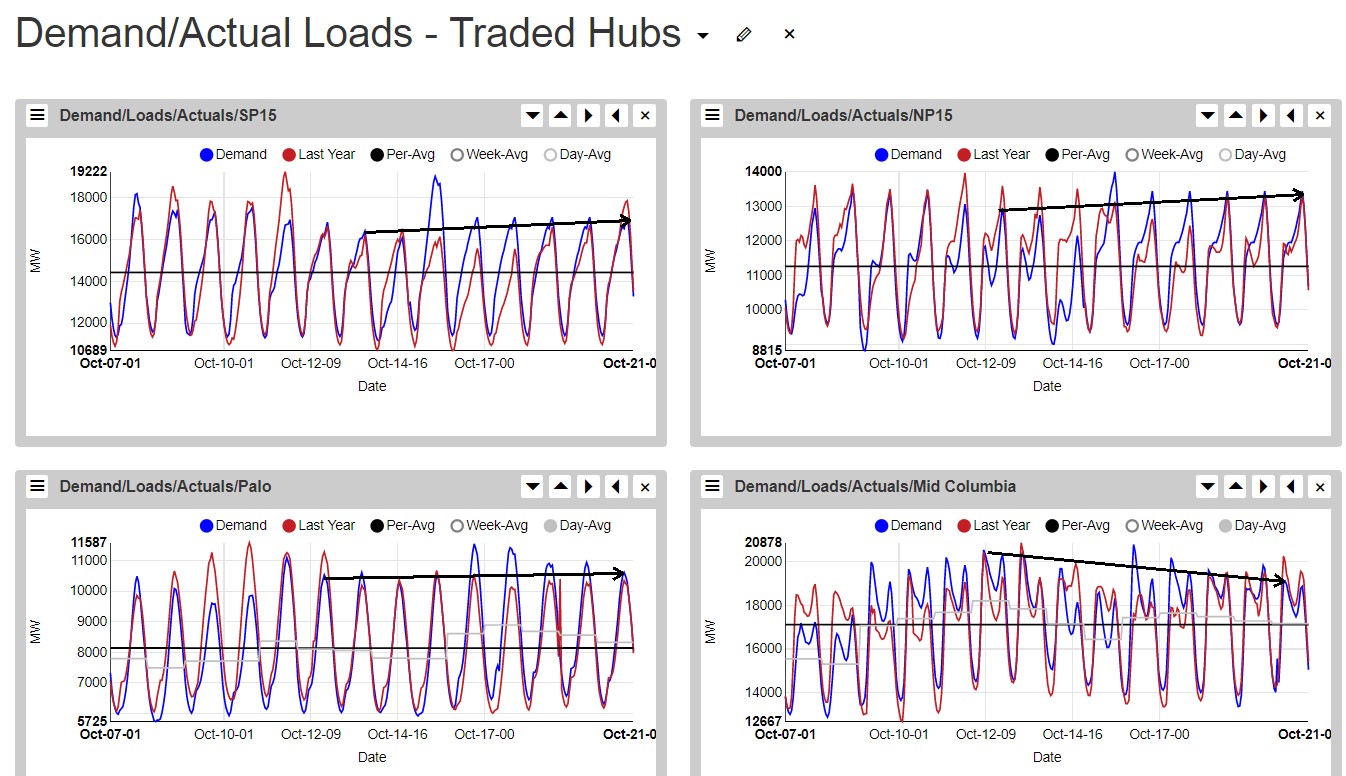 The ISO hubs are up slightly, week on week, but the Mid-C is down on its morning peaks from those warmer (and wetter) days. 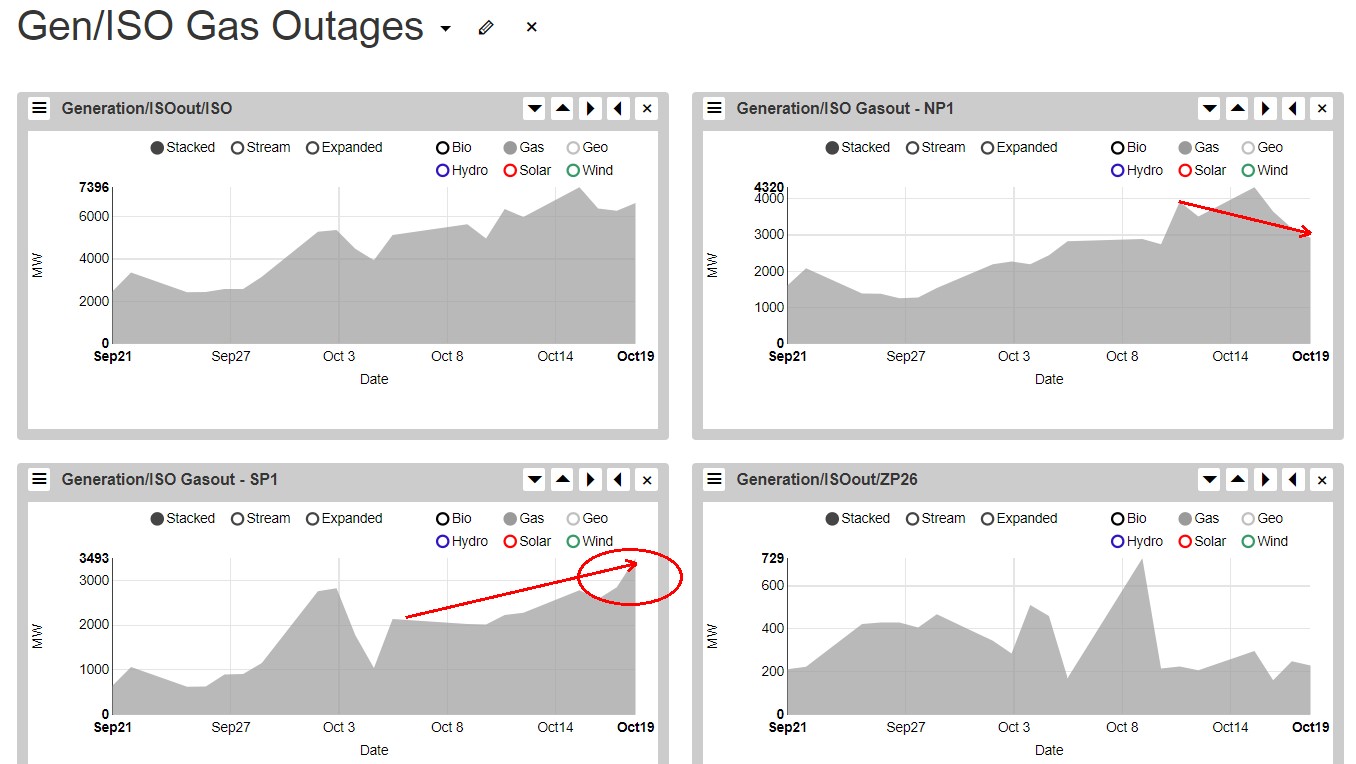 SP outages are up from last week while NPs are down; the breakout in Planned vs Forced is interesting: 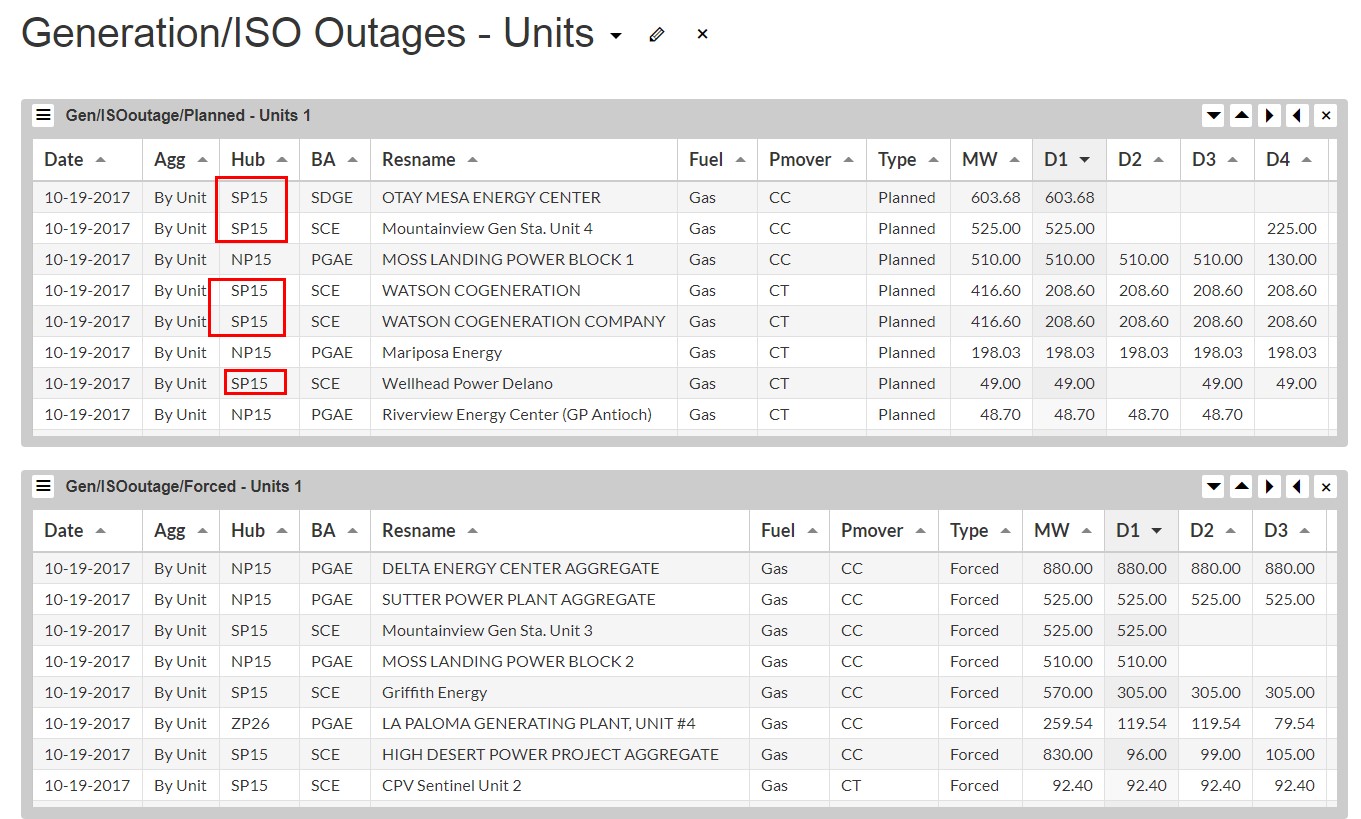 Otay Mesa and Mtn View are both down for planned maintenance, so is the Watson complex. NP has a few out for planned, but most of its gas offline is forced out. 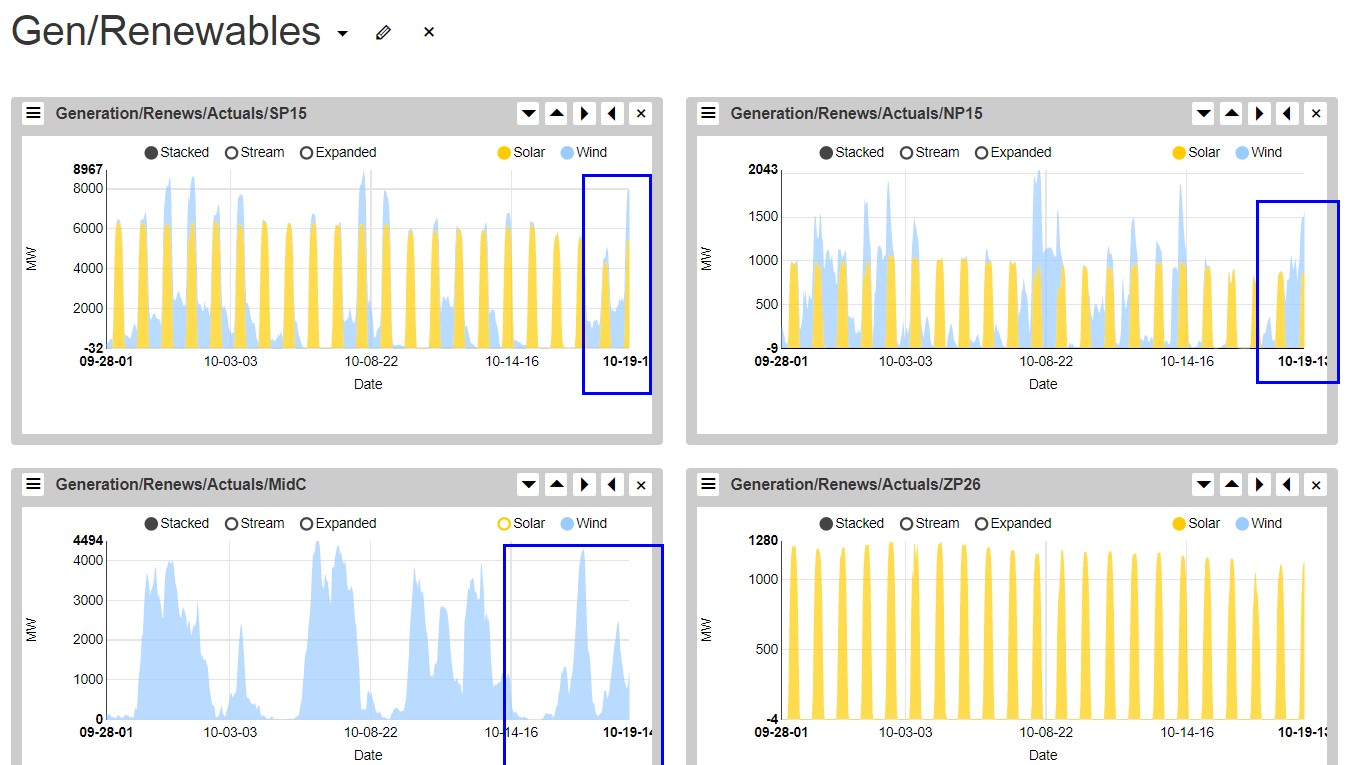 California wind posted a rally of sorts, so did the MidC, all of which contributed to the tempering in cash.

The Northwest is amidst its first storm of WY18 and beyond that is another that might bring even more precip and will definitely bring more snow. 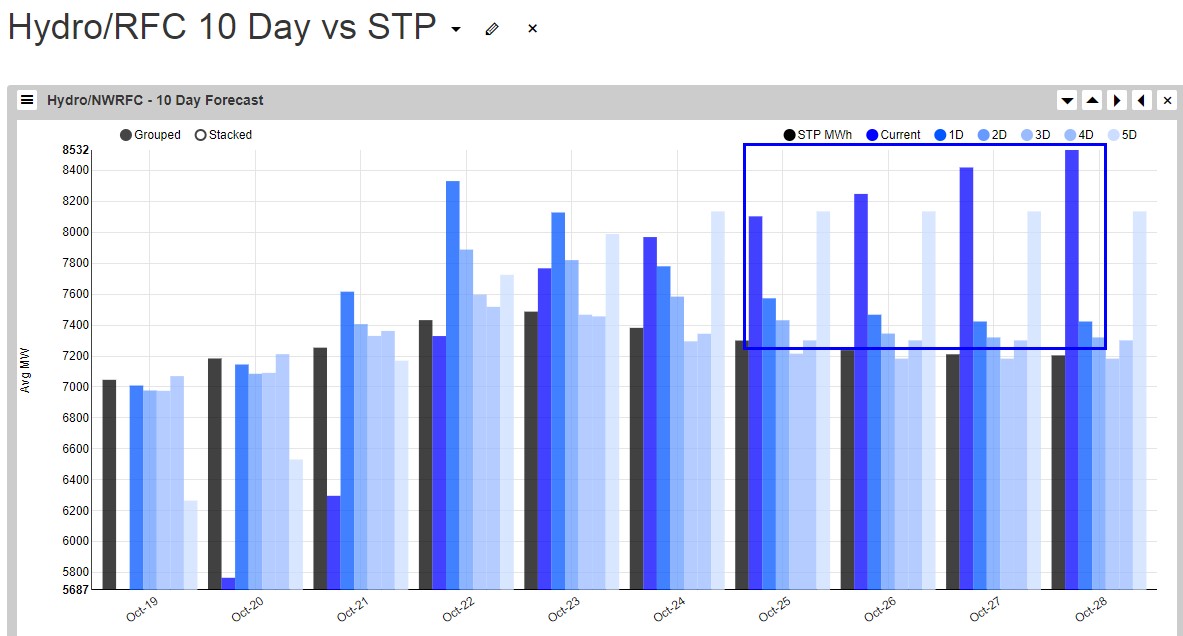 The River Forecast Center is picking up on this new rain and added over 1000 aMW to its back-end of the ten-day forecast. With the second storm now locked in the forecast, we’d expect next Monday’s STP to add some energy to November. 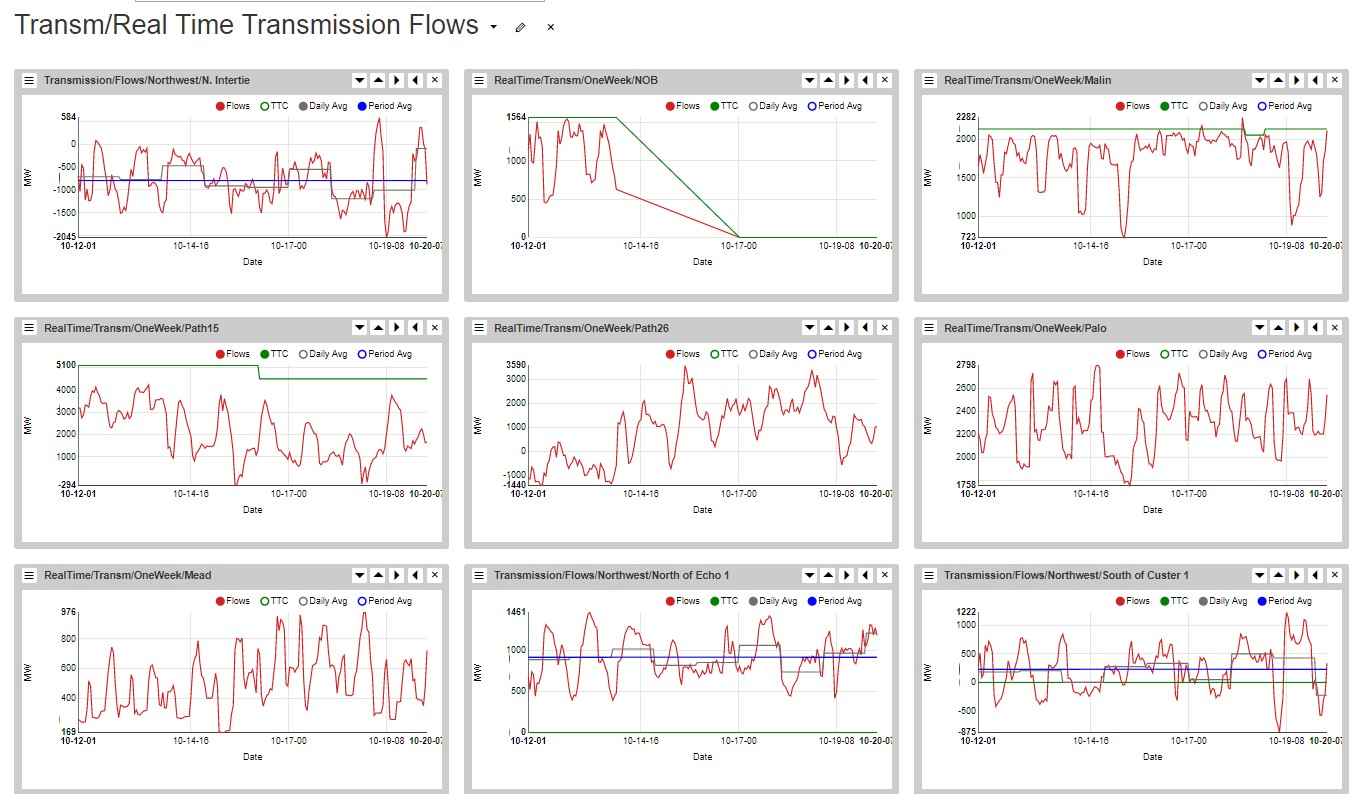 The AC is full because the DC is down. Some of that lost 3000 MW of Net Demand has been absorbed by BC Hydro, their exports to MidC are off a bit, but not close to 3000 MW. Given the increase in the NWRFC forecasts for next week and the mild temperatures, we expect cash to weaken in the Northwest all the while the ISO prices soar. Perhaps it is time to add to your South: North spreads?

Safe travels to everyone heading home.