Paint drying, watching it that is, is what the mid-January WECC markets are like. Weather is stuck in a warm, dry pattern; all the action is to the east of us where it’s bitter cold. But this extended dry will impact our markets but, like paint drying, it may take a while. 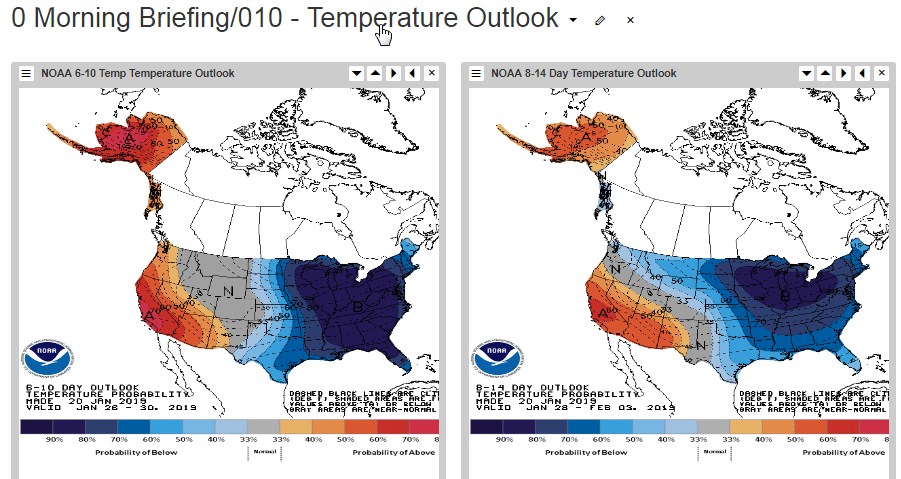 NOAA gives LA 14 days of beautiful and sunny weather. No gas issues there, perhaps that is why Socal Citygate’s spot price settled beneath PG&E for the first time in recent memory?

Even as Sumas continues its free fall to $2.00, the spread against Citygate collapsed on Friday – most likely off of very weak demand. Another takeaway from the above table – note how tight all the basis are to one another. Contrast the current flat spreads to October and November. 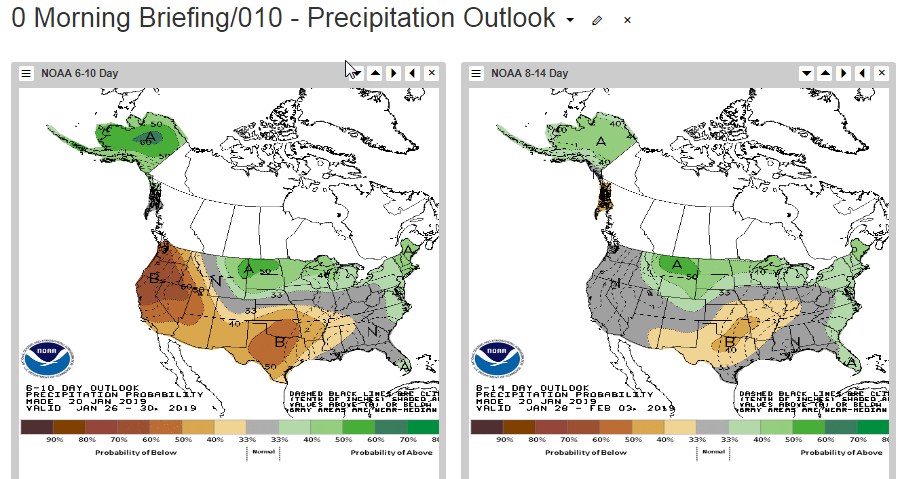 That’s a dry 6-10 day, on Saturday it was a dry 6-14 day. Mostly, the WECC reverts to normal around day 10, which is far enough into the calendar to give us low confidence.  Fortunately, the WECC got hit pretty hard over the last week, and SWE anomalies rallied: 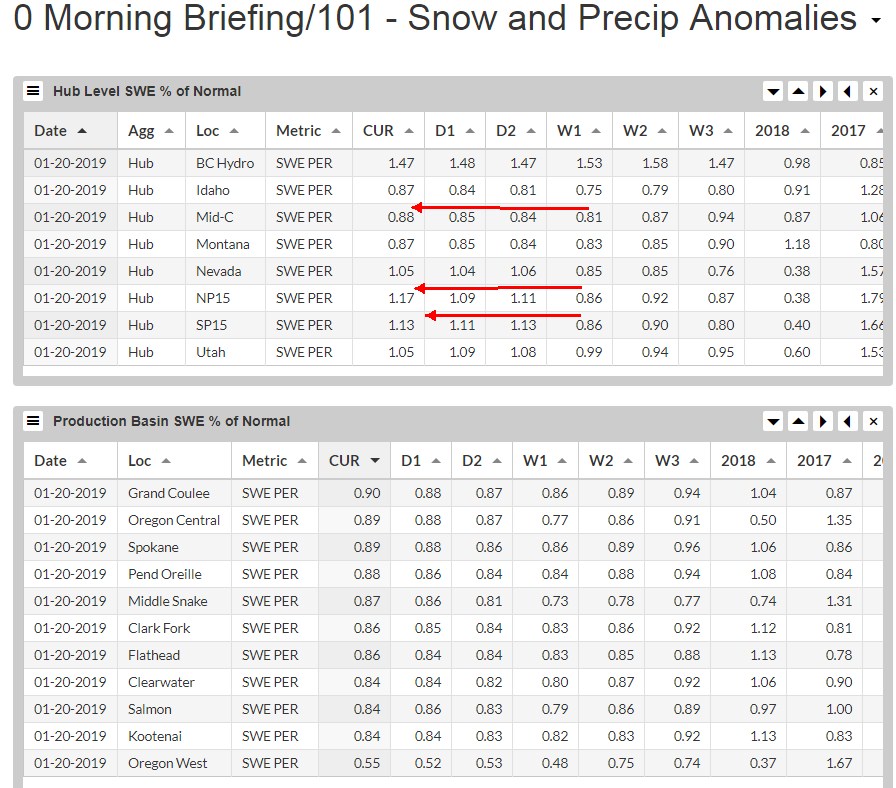 Ansergy’s MidC index is back to 88%, and the California indexes are well above 100%.  Those latter ensure an extended runoff, we just don’t know when, though given a warm bias we’d expect April and May to bear the brunt of the unregulated inflows. 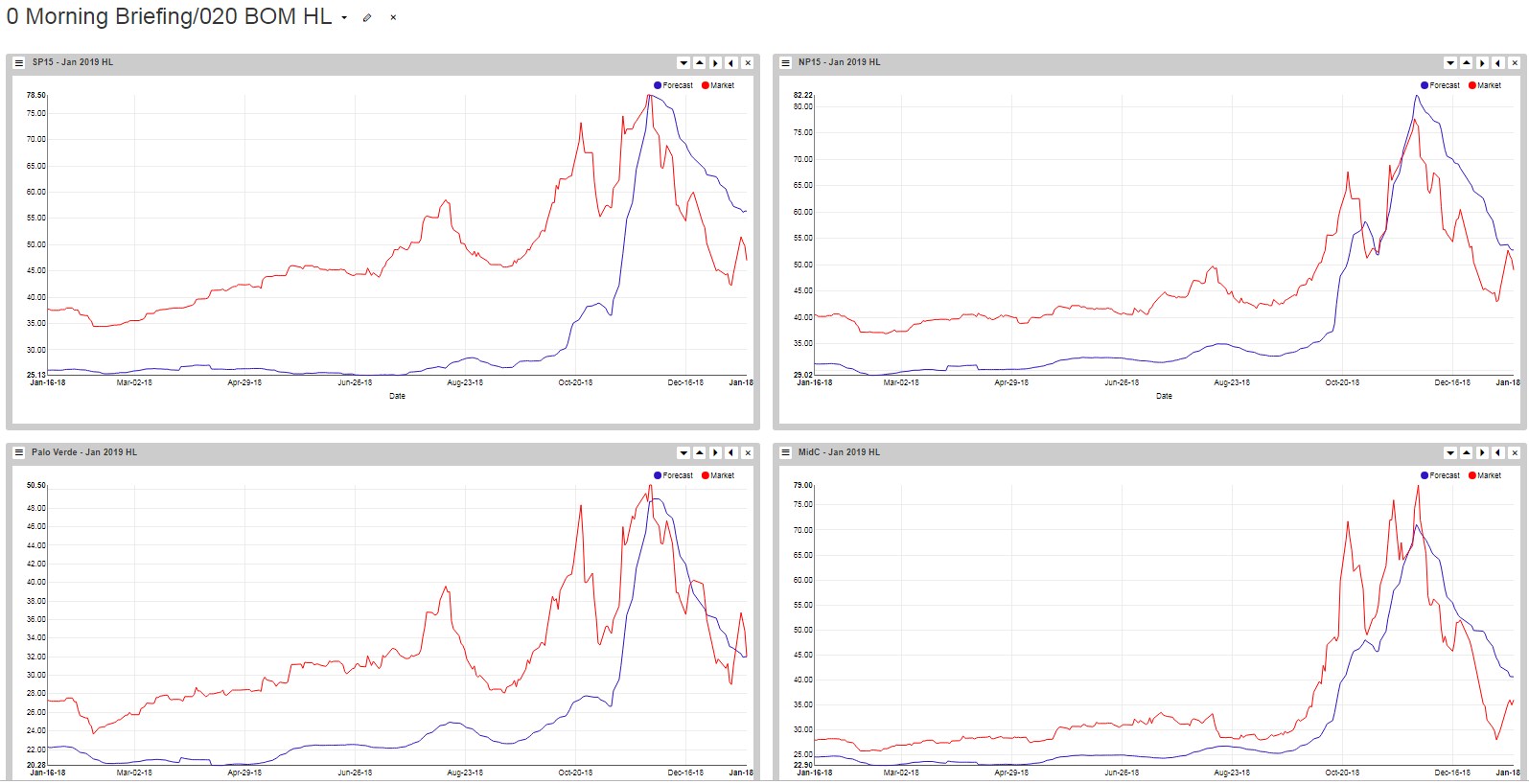 BOM pulled back, rather sharply, but why wouldn’t it when the weather forecasts pulled back even more?  Now we can cover all of BOM with the 6-10 day and it is ugly. 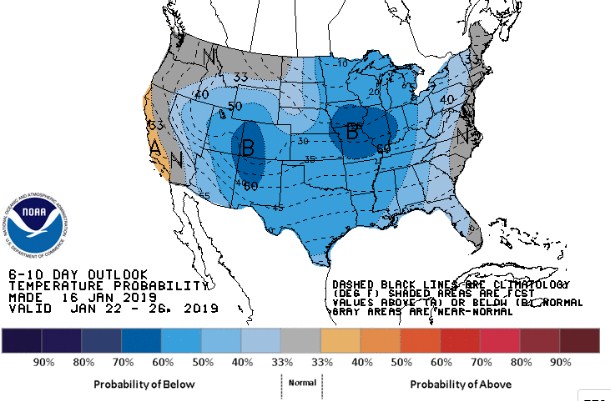 That’s what we knew as of Thursday morning; then the outlooks just grew more bearish for WECC while more bullish for PJM and its brethren. Oh well, you’d expect the sell-off to continue in a thermal system, but the WECC has hydro, lots of it, and water is tight, or tightish. So not sure you see everything collapse. 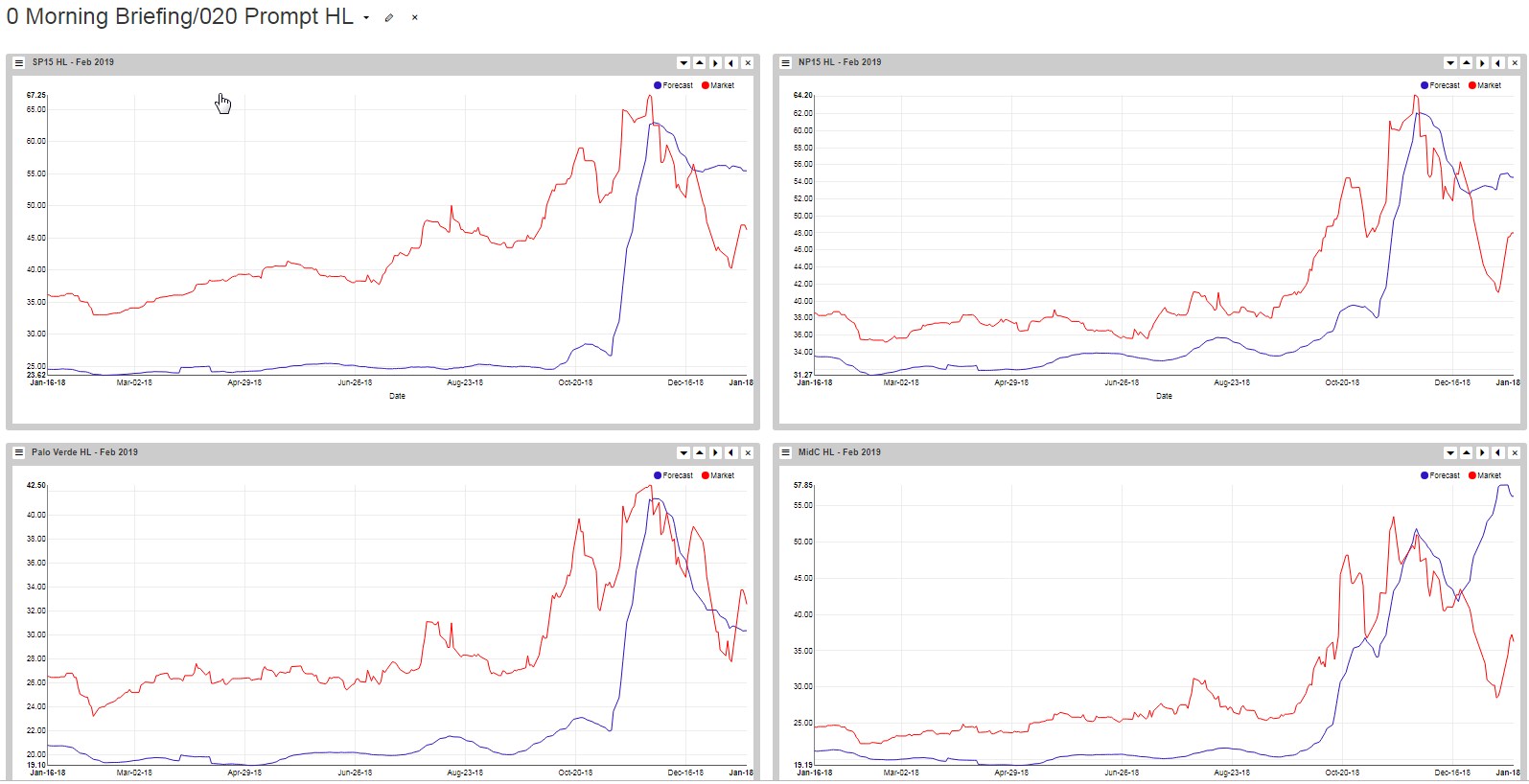 Prompt didn’t pull back like BOM; I guess because the back of the forecast wasn’t as bearish and we have less confidence in it. One of the weather gurus on that Enelyst chat board got all hot and bothered over the 30 day, or maybe it was a 90 day, cold outlook. I could only laugh. Trade off of those extended forecasts if you are looking for a new career. 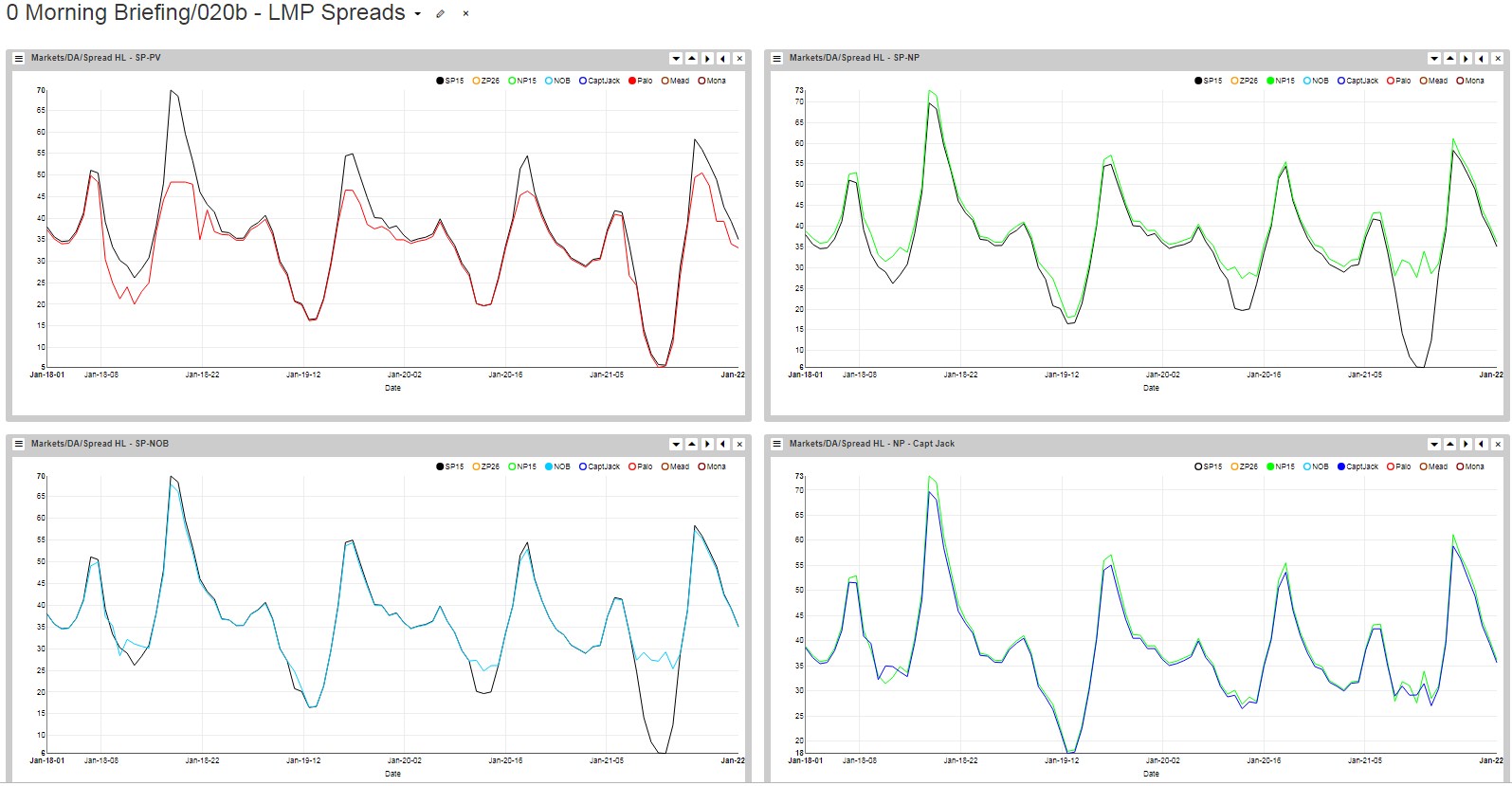 LMPs are weaker than not but more telling is the lack of spreads between any of them. Even Palo tightened up to SP. 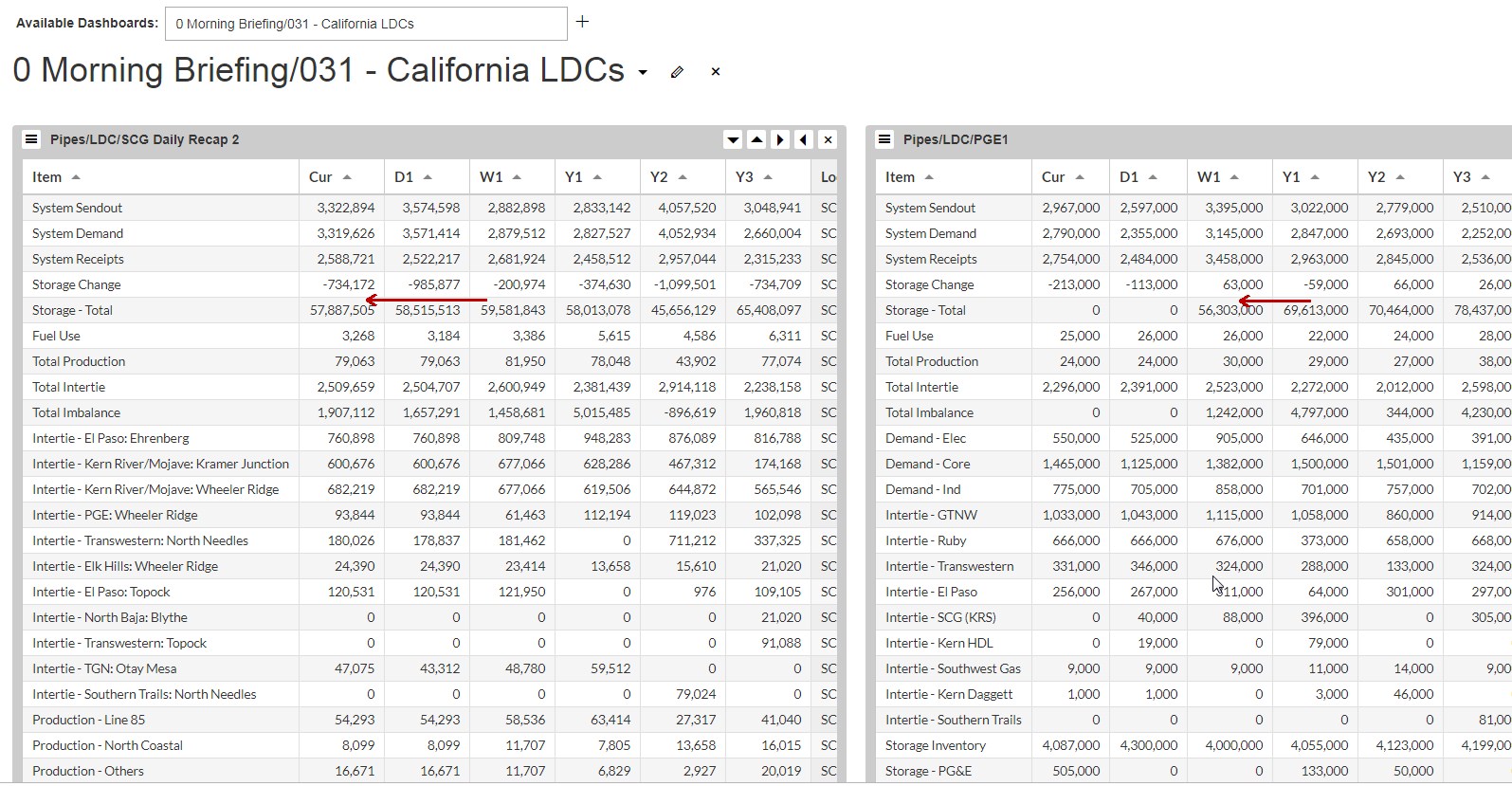 Both Socal and PG&E are drawing hard on their storage, especially the latter. It’s almost like they know Socal will restore its import capacity and summer refills won’t be a problem. Just a guess, but Socal repairs remain the WECC’s biggest summer wildcard. At this point, if I were to bet, I’d guess they restore 600 MMCF by mid-April and another 400 MMCF by June. Should that come to fruition, we could see another significant selloff across the WECC. There are still massive Socal Citygate premiums embedded in every roll, outright, on/off, and location spread. All of those will dissipate, just like they did when the Sumas capacity was restored. 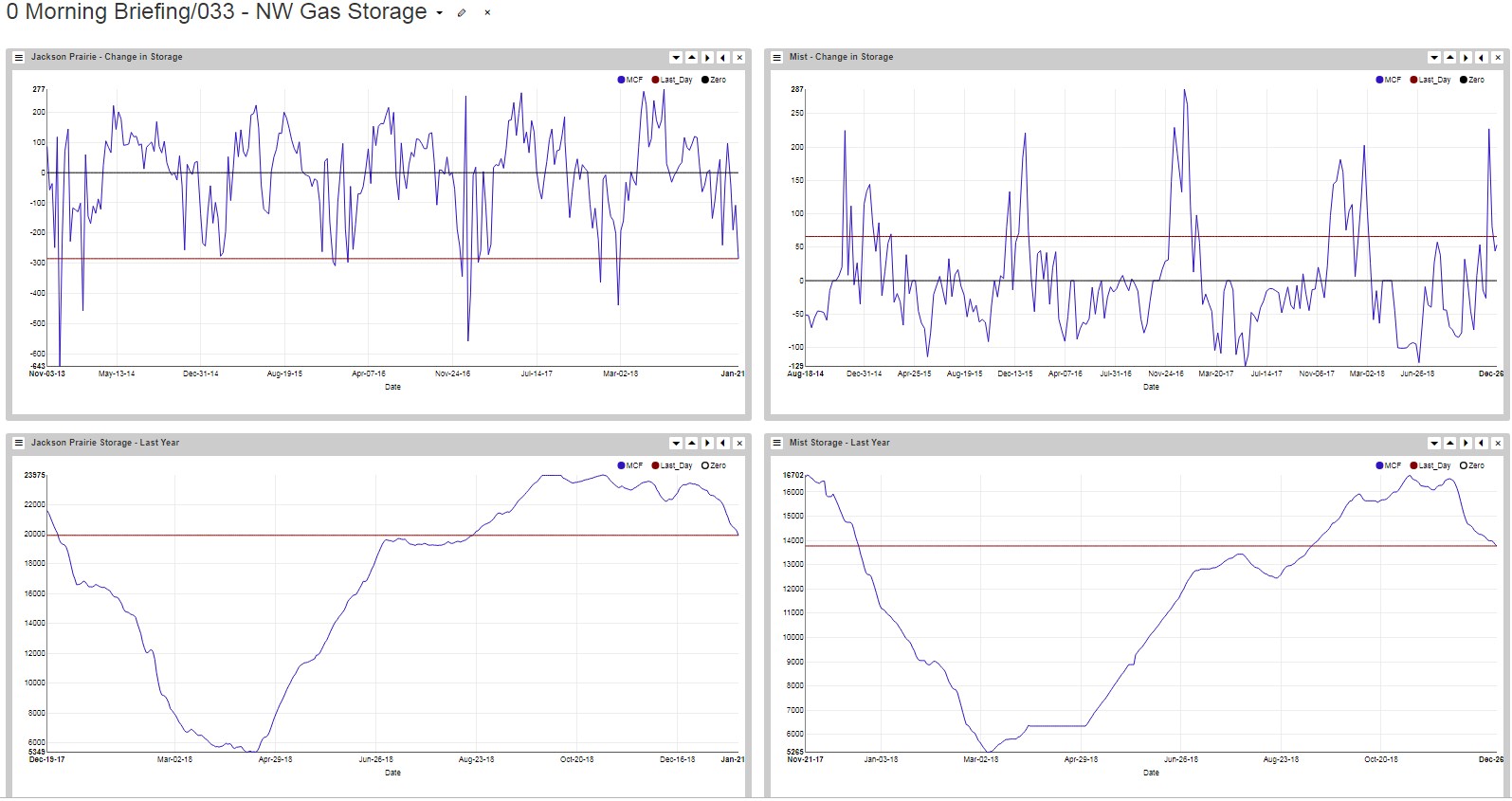 Adding to the Northwest’s woes are these big drafts at Jackson Prairie. Gas demand is soft, but now Puget has a new problem – too much gas. They husbanded the storage to prepare for a Winter Armageddon that never arrived; now they are puking it out to make room for the summer injection season.

The storage project is between 300 to 500 MMCF fuller today than any time in the last six years. Does that mean there will be 500 MMCF less room for injections this summer? That’s a fair amount of gas sloshing around the MidC trying to find a home and Sumas will be back to chasing $1.00 handles. 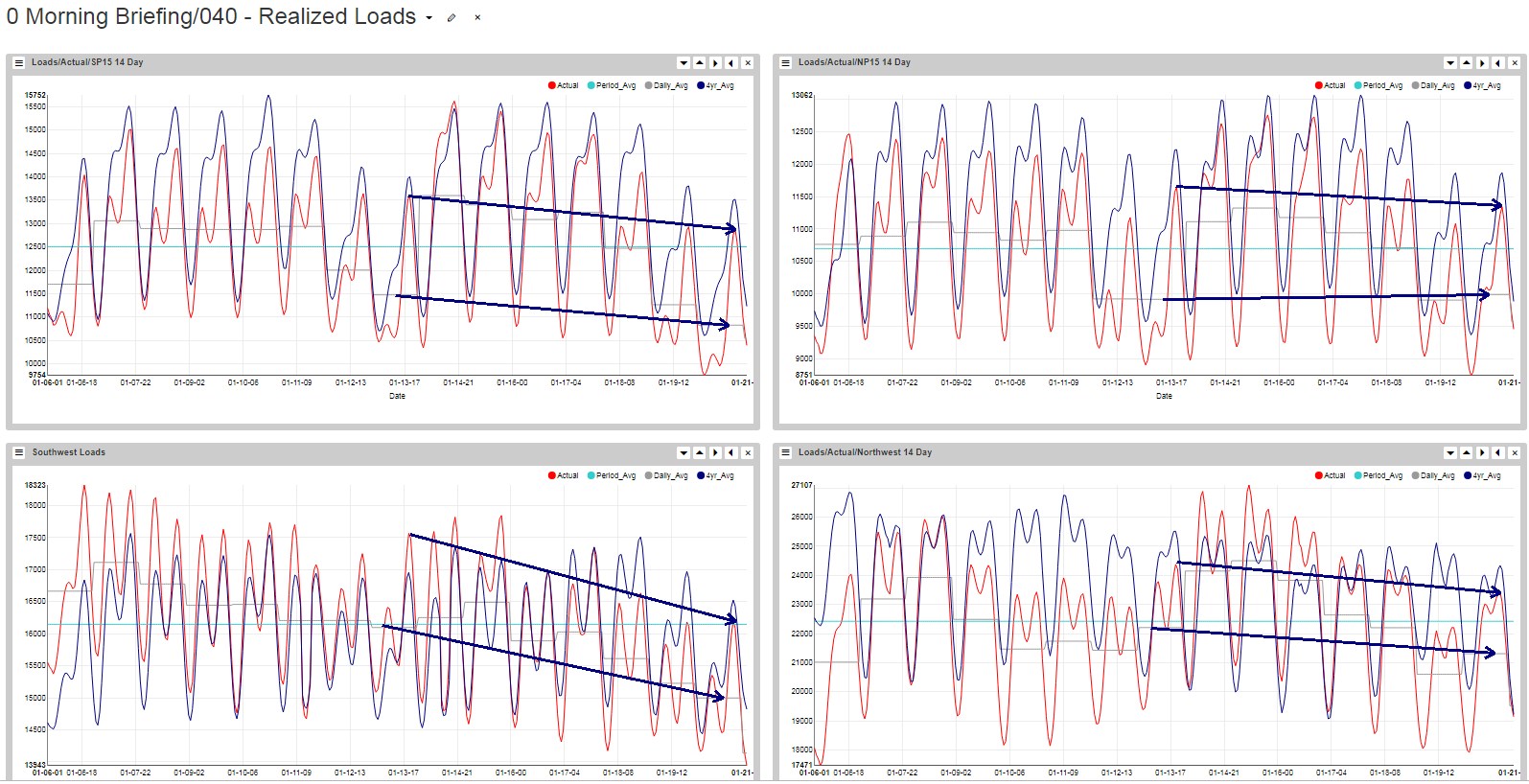 Not much to add to that chart, the arrows say it all. Loads are abysmal. 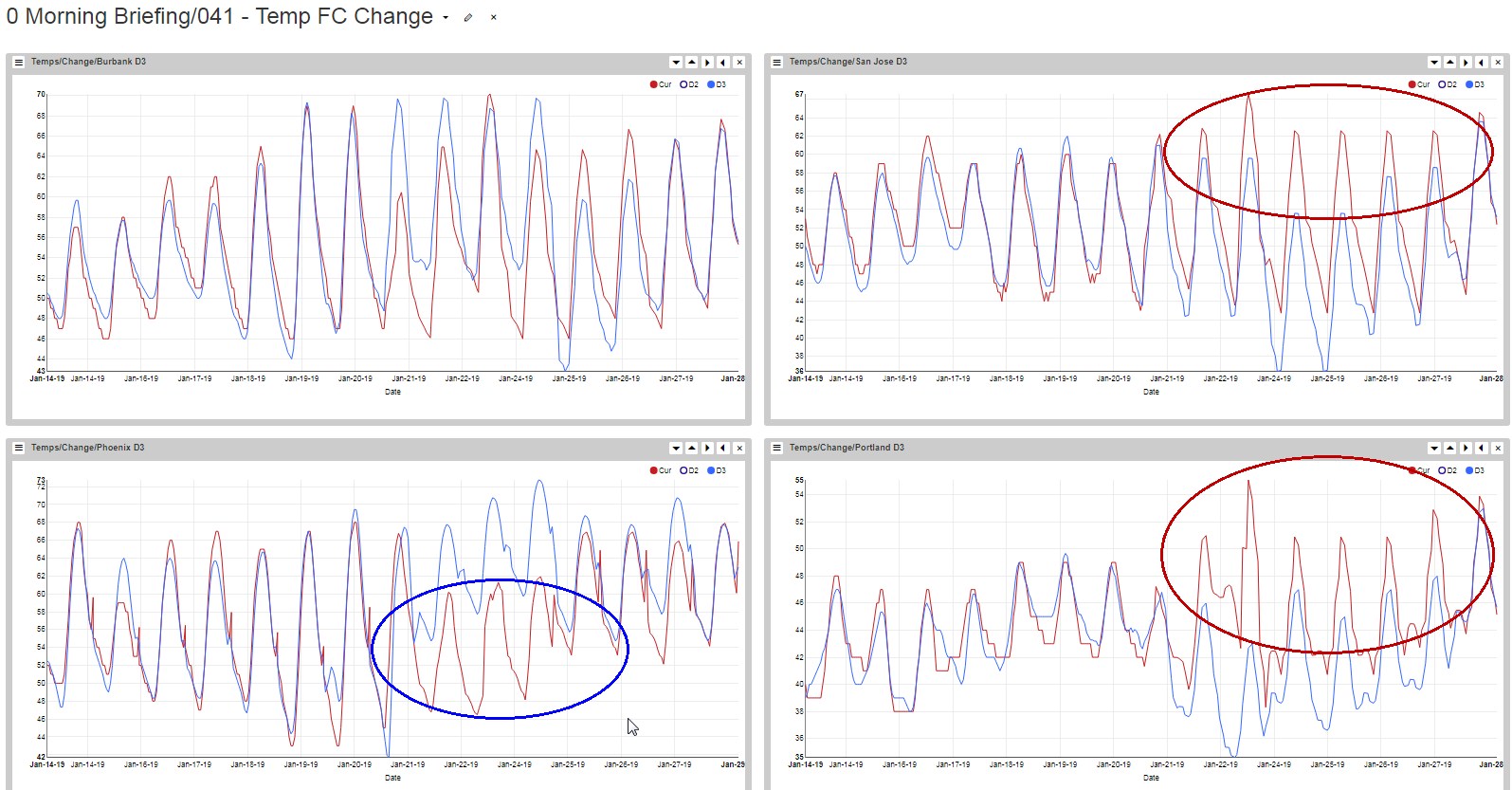 This report looks at changes in the weather forecast, todays versus three days earlier. The front is quite stable at all four traded hubs, but the back has San Jose and Portland warmer and Phoenix cooler. 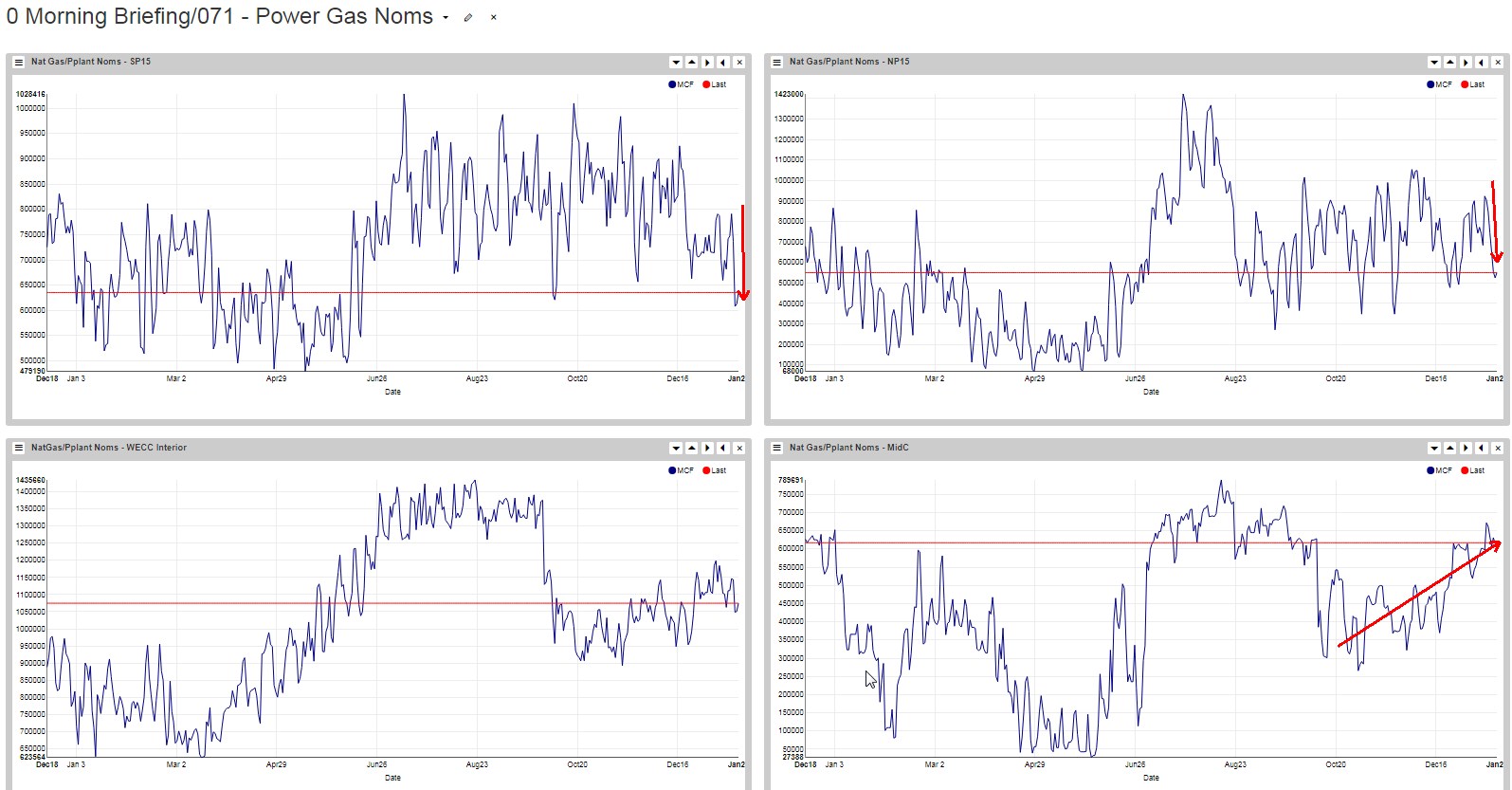 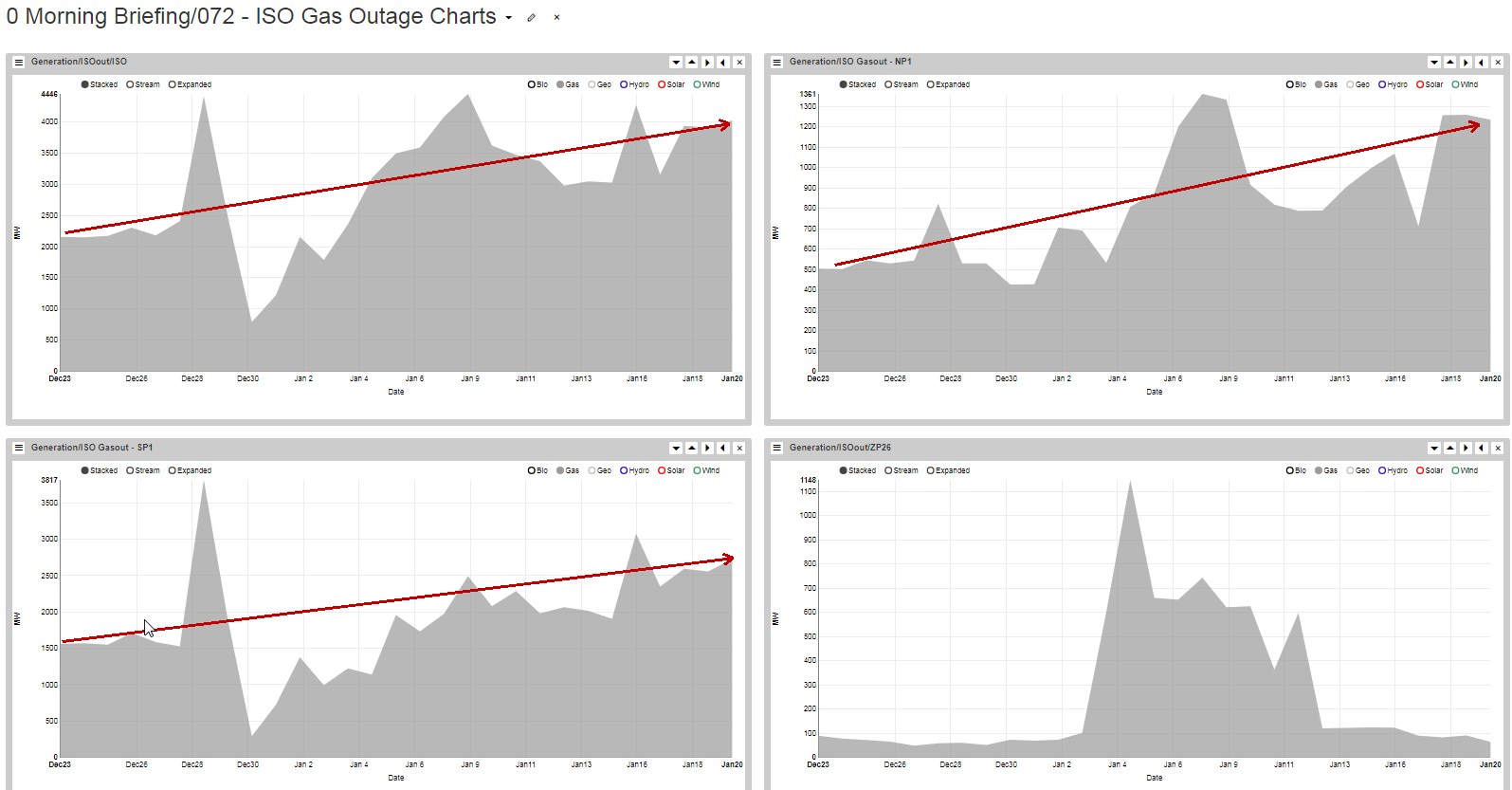 Gas outages in the ISO are up since the start of the new year; the late winter outage season has begun. Not that it matters, there is plenty of idle capacity when Burbank settles in the 70s. 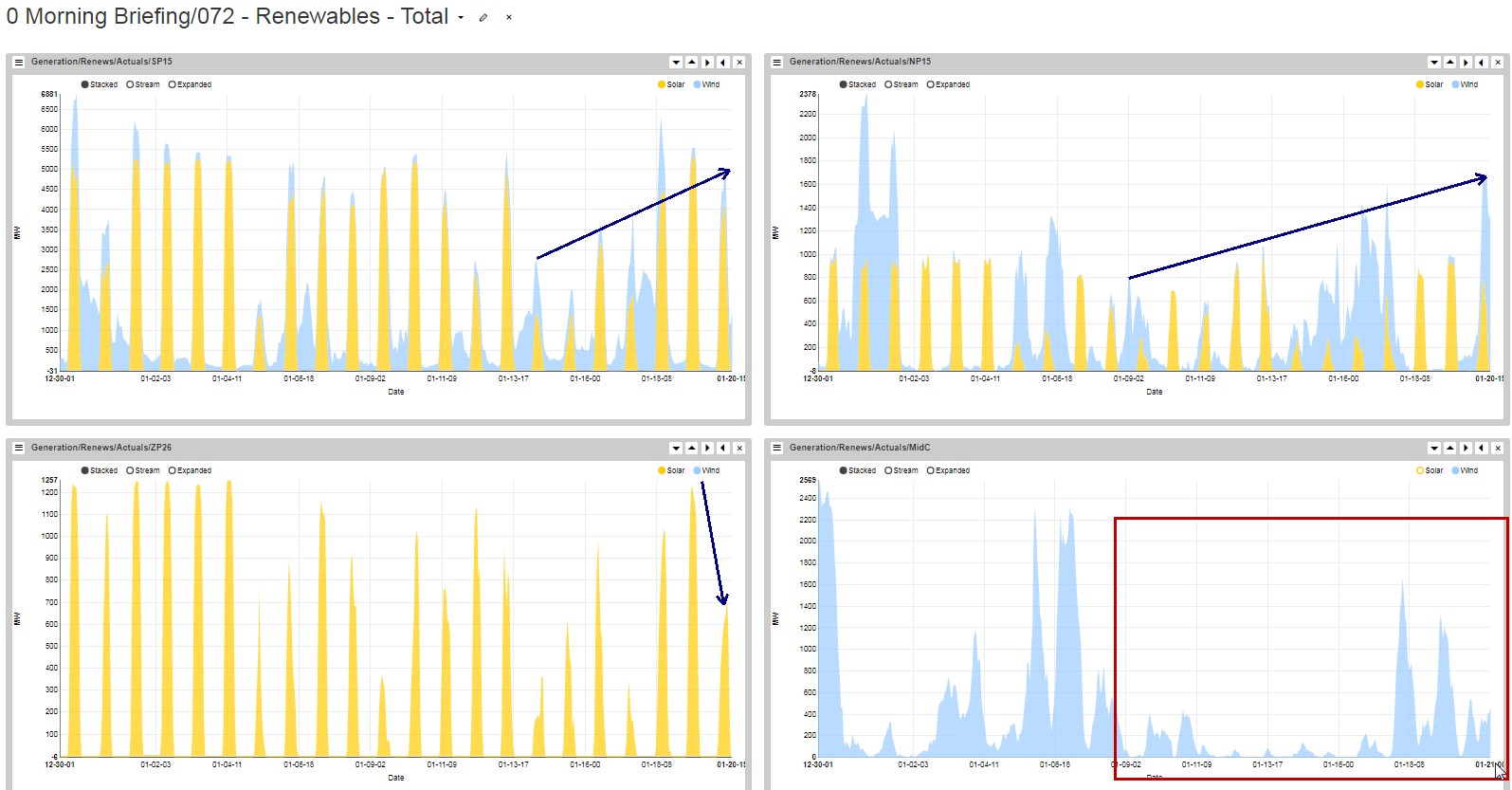 Renewables are up in the ISO; they were down because it rained hard and cut the solar. The wind at the MidC increased but remains well below average.

Prices are up, week-on-week, at the MidC because hydro and wind are down, not because demand is up, it isn’t.  Check out those year-on-year hydro numbers (2nd table); crazy tight right now. 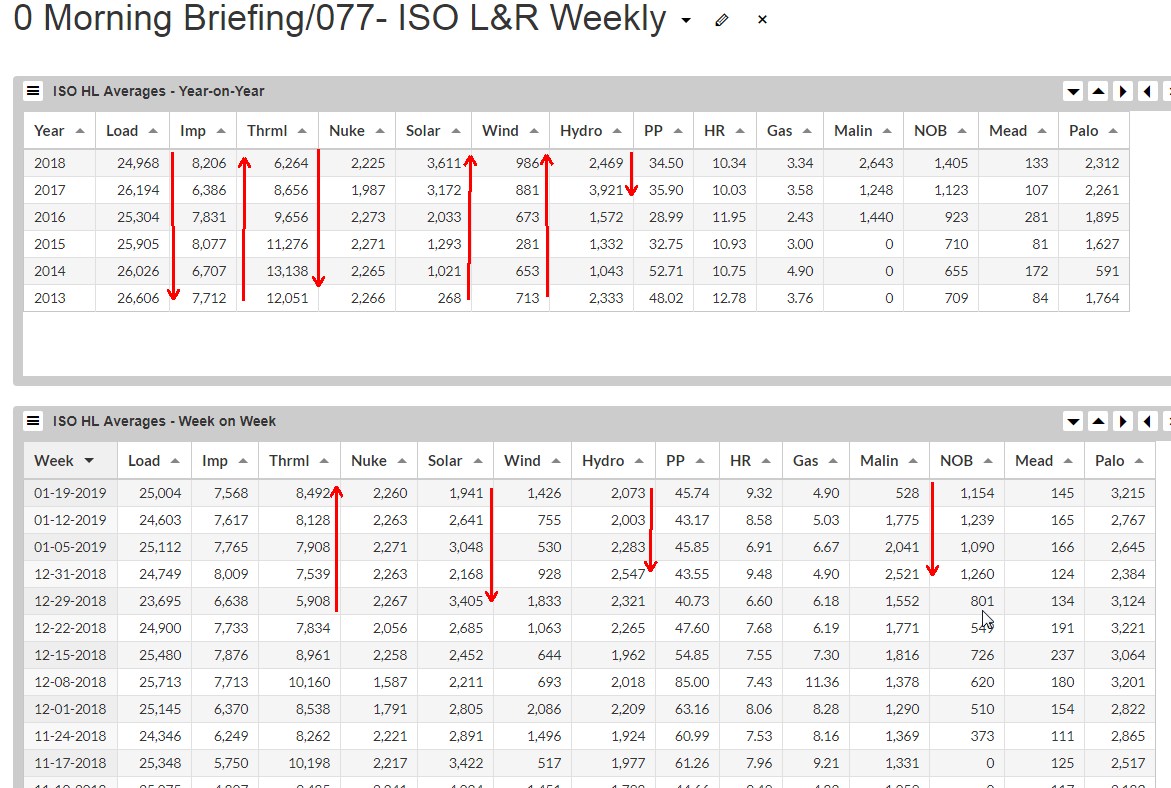 ISO’s loads are way off, year-on-year, and imports are up. I like these tables; they summarize the fundies in an easy to see perspective. 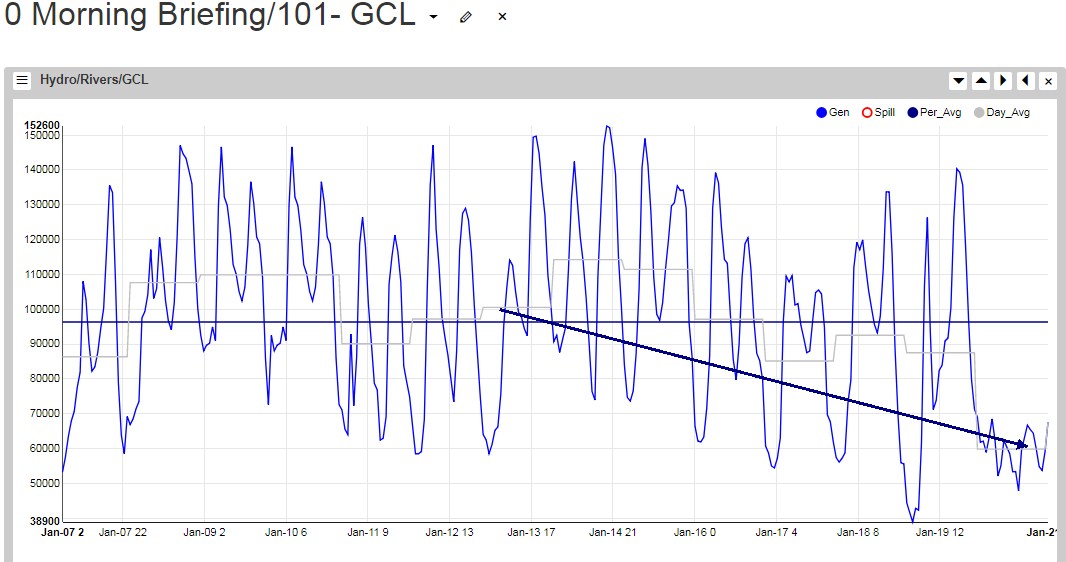 BPA cut power at Coulee, week-on-week. Yesterday’s average output was the lowest in weeks. Maybe the STP is right and Feb and March will be the tightest in years?

What Coulee giveth, lower mainstem taketh. Flows across the latter were down.

Inflows at the international border are well-below normal, in fact, all six guages above Coulee are below average. Worse, there isn’t any low-level snow to melt; nothing to fuel natural river flows in Feb and March. 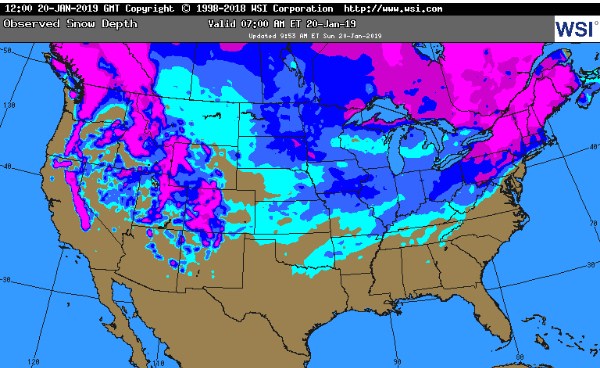 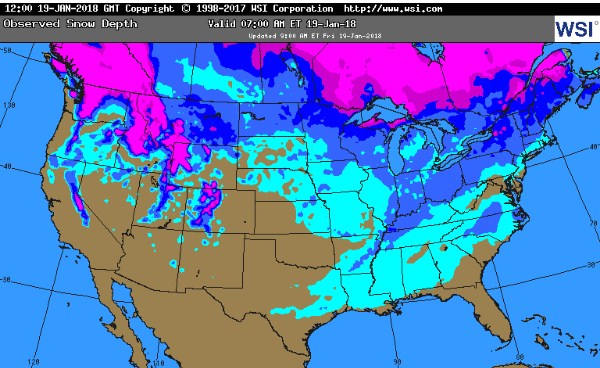 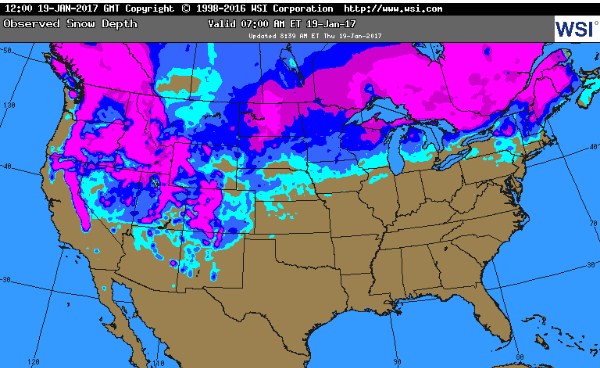 You see the difference, especially against 2017 versus 2019. There just isn’t much to melt below 4000 feet which is the range that drives the season’s first freshet. This year, there may not be a “first freshet”; at least that is what appears to be driving the very tight STP Feb-March outlooks.

At least the Northwest reservoirs are mostly full; the biggest hole in the Columbia are at Mica, and we’ll argue its storage matters the least. That massive reservoir can hold multiple years of water, while everywhere else is on annual cycles that can’t vary. And besides, the swing in discharge at Mica is not very big, like around 15 kcfs.

Average peak discharge at Mica is about 18000; max discharge is maybe 30 kcfs, leaving around a 12kcfs swing. The Spokane River has more volatility than that which is why we suggest the hole at Mica is not going to be a major MidC driver.

All that rain has forced most of the primary storage projects in California to release water; we suspect some of that water is spilled given that the ISO’s hydro energy is not moving up. 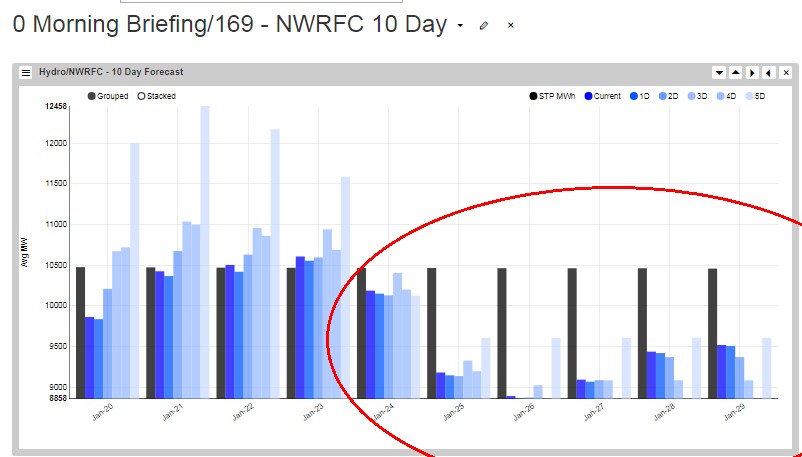 It’s Monday, time to play the STP whack a mole game. Which month gets bumped, which gets cut? 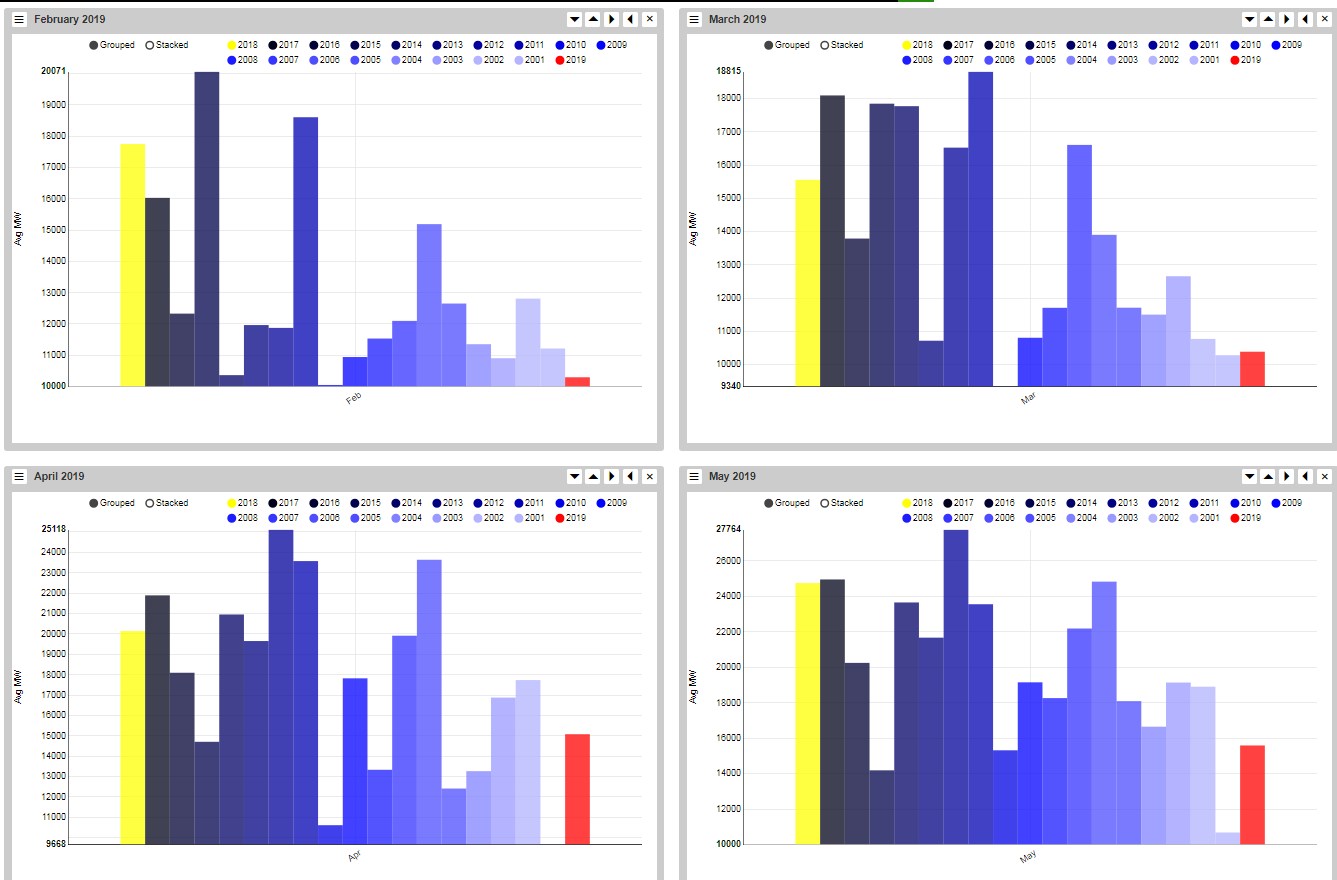 Hard to see how the NWRFC could cut either Feb or March any more than they already did. If anything, they might raise both if the Corps elects to do more drumgate work this spring. Should that be the decision, then Coulee must be pulled to 1255′ by March 15 and we suspect there will be little to no flood control draft. So, if the STP doesn’t soon bump Feb and March, we can conclude there won’t be drumgate work.

As the Northwest gets longer, more energy flows northward. Flows into SP on the NOB are off and the AC remains derated.

Weather is bearish, but Northwest hydro is tight. It appears the plays are more in the backend of the water year than the front. Cash is not going to change much off of this forecast, but the dry weather makes the spring ever tighter. More on that in a post to follow.