We left the fundies bearish in the front but it is all relative to not just supply and demand but also price. Today we’ll examine the MidC curve through September, just onpeak; one of these days we’ll look at the off but today isn’t one of those days. On Thursday, we’ll do SP15.

As usual, we’ll work off of the APT tables; this one was filtered for MidC months, HL, and outrights and rolls. 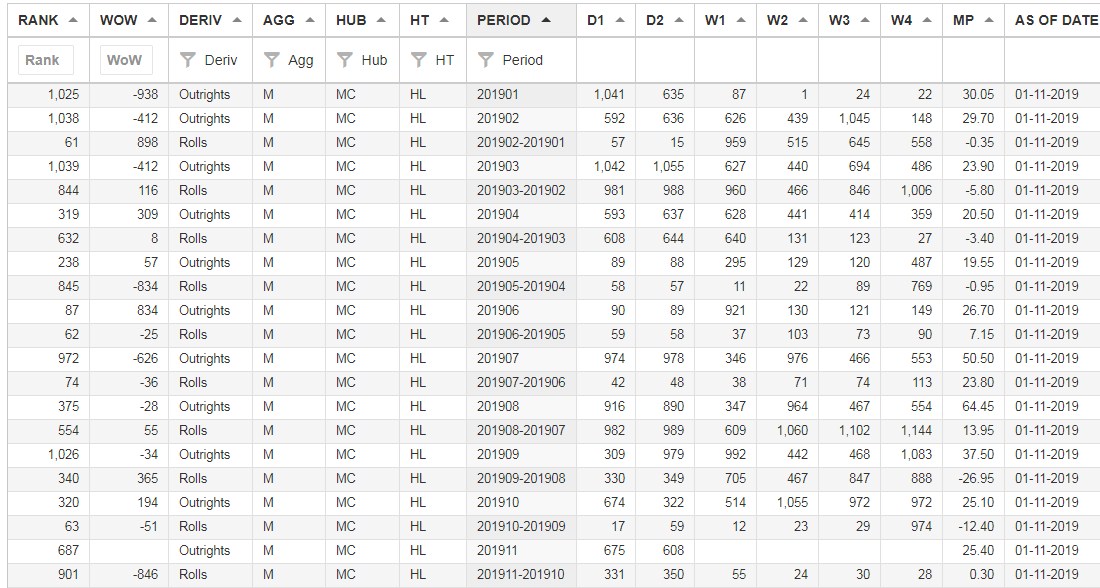 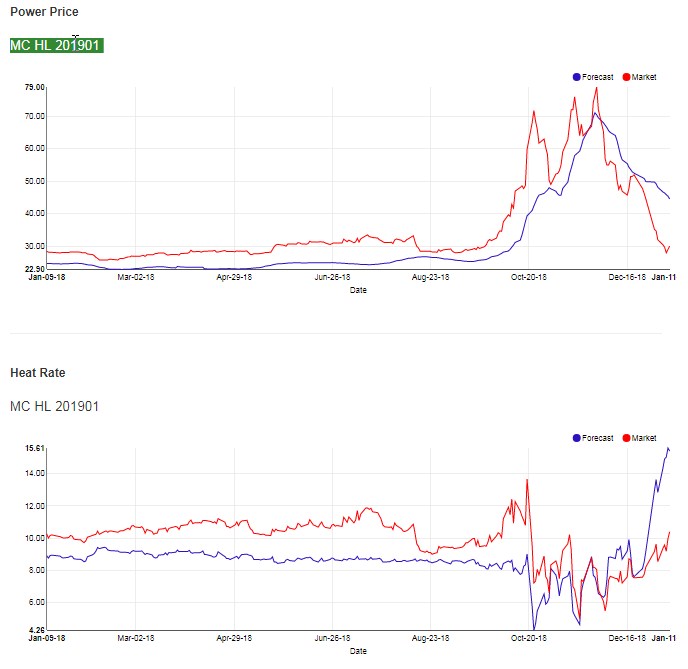 First, a word on the forecast. It is overly bullish in my opinion and driven by a tight hydro forecast which is driven by an insanely tight STP forecast. We aren’t willing to abandon the STP, but just want to point out why the forecast is so strong. The dilemma of using STP or Ansergy’s forecast is historically an ongoing debate. Since the market uses STP, we elect to do the same.

Caveats aside, BOM is cheap historically for both Power Price (PP) and Heat Rate (HR). Fundies are bad so it should be cheap and there is more gas to be added at Sumas, though not much more. Still, this is cheap, and the market concurred on Friday. With a dearth of realized wind (both ISO and BPA) over the weekend we might see cash firm; if so, owning this might be like a cheap call, but doubt it rallies much, if at all. Still, at these current levels, I’d own it, like one piece at best. 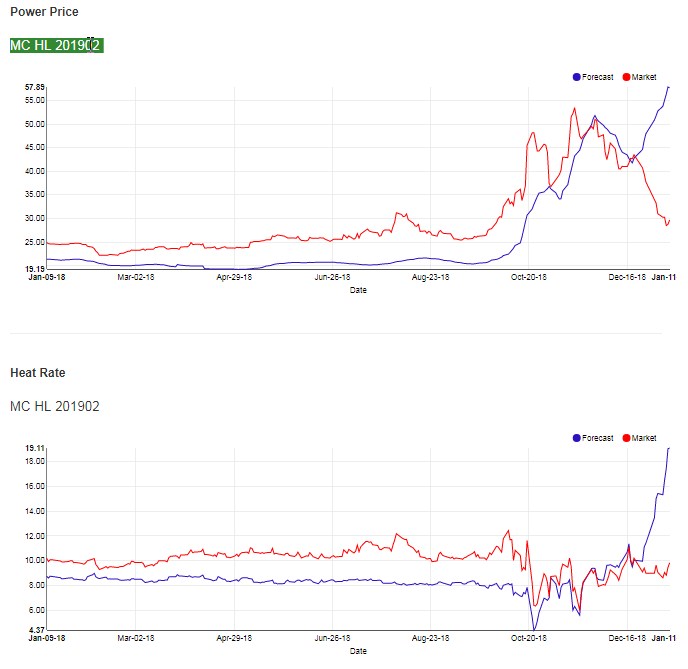 Prompt is the same chart and the same fundies, mostly. One solid bullish fundy is that it has been warm in the forecasts for two weeks. What is the opposite of warm? Cold, and weather seems to oscillate in weekly cycles; now that NOAA has painted the mid-west and east cold, perhaps that system slides west as it has in the last two cold events? At these cheap levels, a long position might pay. If you’re willing to eat a few bucks, you can own the cheap call. Plus, we like that there will be little draft and no low-elevation snowmelt. LONG 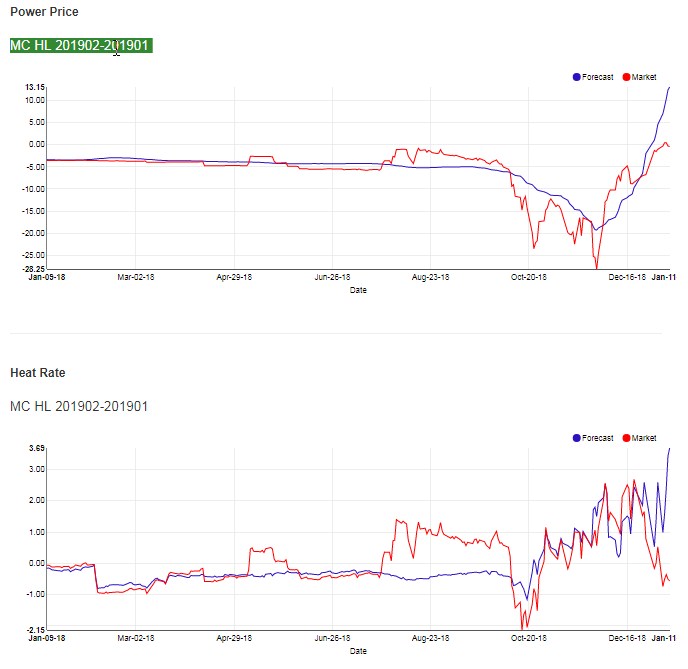 The roll is richish PP and cheapish HR. The forecast prefers the Prompt over the BOM, but that’s because of how the NWRFC sees it in their STP.

Last week’s forecast put 1800 aMW more water in Jan than Feb, no wonder the model prefers the latter. But what strikes me, even more, is when you compare the Feb to prior years:

They have it as one of the lowest Febs on record, but the SWE anomalies don’t support that, nor does the 6-14 day forecast. The risk of going long off their forecast is they change their forecast, and the 8-week trend has been to jack the front and keep the back tight. But, we’re long both BOM and Prompt so will ignore the roll and its Feb bias. 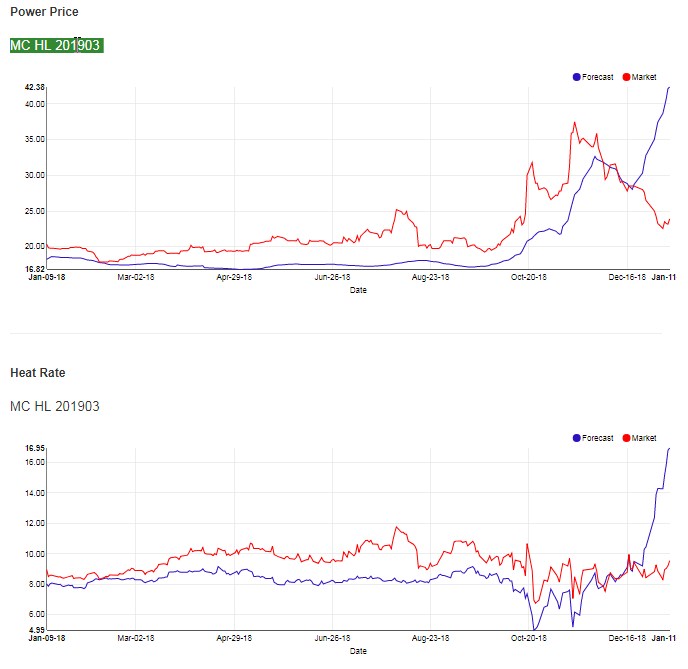 Ignore the forecast; it is driven by STP which is 12,000 aMW lower than last year’s forecast for the same week: 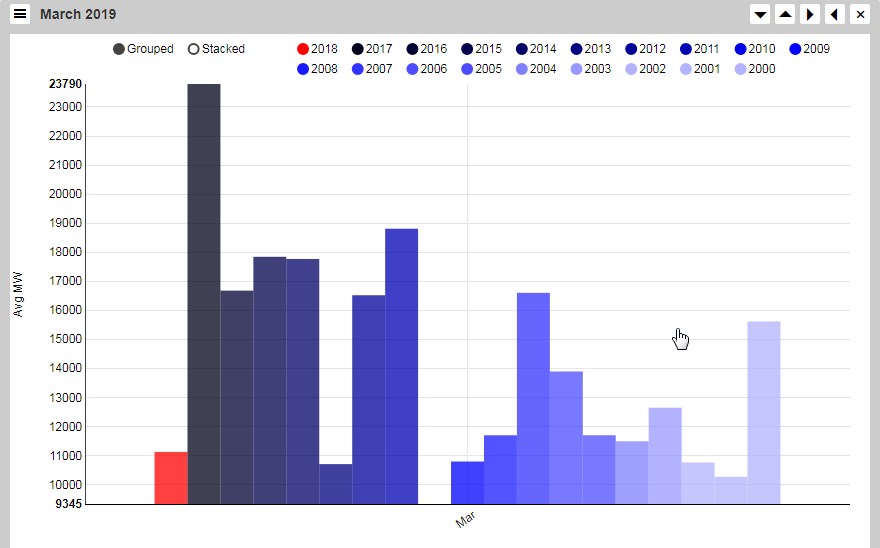 12000 MWs! Compare this year to the previous four-year average the delta is still around 7000 MWs. We’ve caveated our forecast enough, let’s focus on the market, and it is cheap, way cheaper than modeled by the NWRFC. What if the feds are right? What if this is the third tightest March in the last 20 years? Long ain’t wrong until it is. BUY 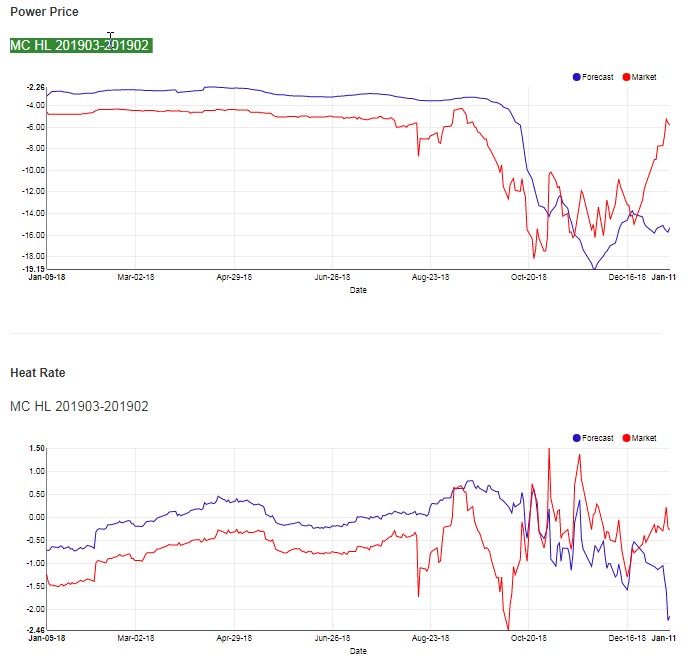 The forecast heat rate on the roll is plunging while the market is soaring and is now approaching contract highs. If there will be a cold-induced MidC rally it will more likely happen in Feb than March; if there is a catastrophic early melt, it will more likely happen in March than Feb. If the Corps orders drum gate work the draft will be in late Feb and early March, not early Feb. SHORT this roll. 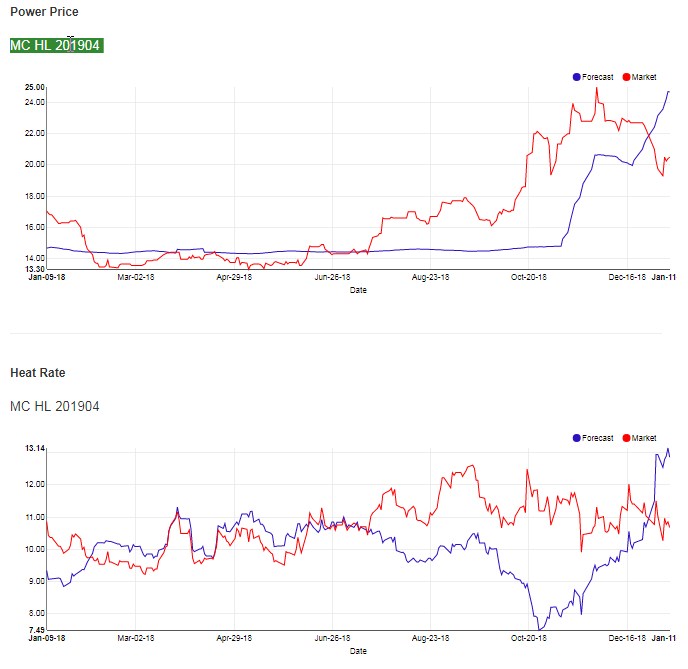 April isn’t cheap; it is just cheaper. If you get long Bom and Prompt, I’d be nervous about being too long anywhere else. We know nothing about the timing of melt, though we do know there will be minimal April draft and same is true for low-level snowmelt. If I had no other position, I’d own this too. 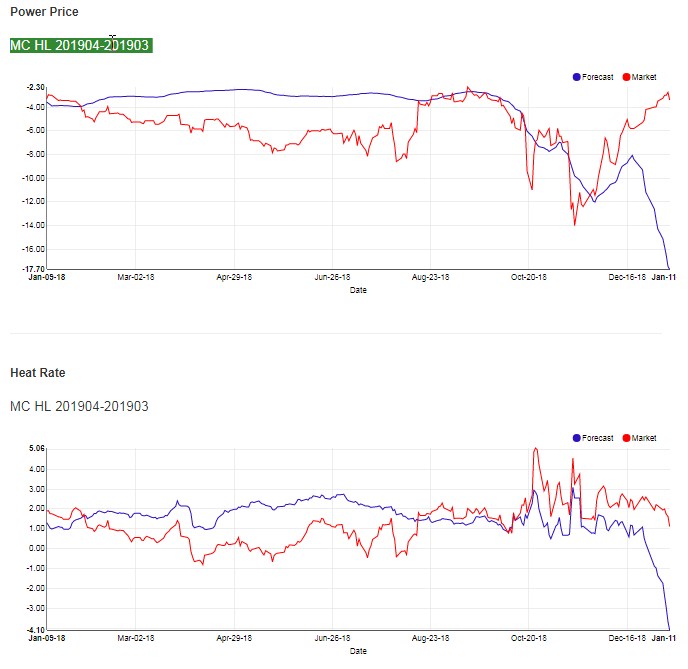 The roll is priced at historical average levels, though the forecast is massively biased towards the March. Trading the roll given our directions in the outrights would just clutter up the book…PASS 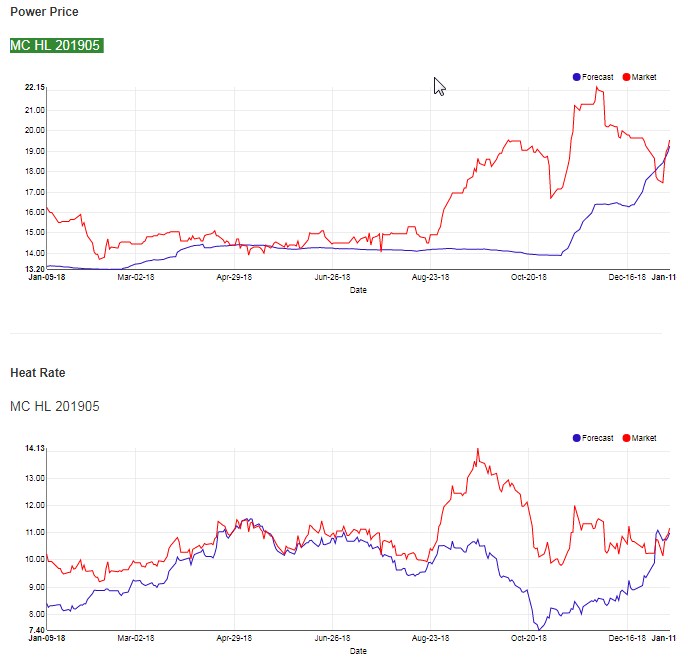 The market is starting to like the May, that’s a nice rally over the last week. It is too early to trade timing, and there aren’t prominent anomalies here … PASS 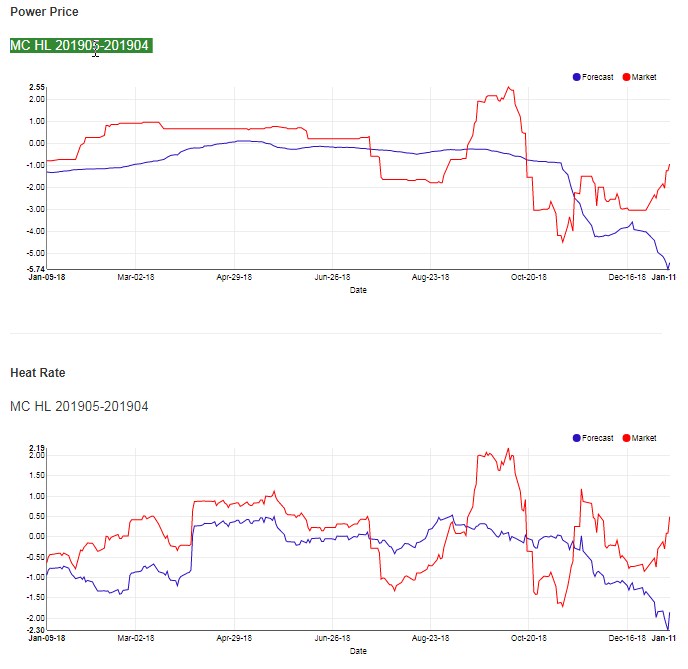 A low draft means an equally low refill. If spring is cold, any melt will be deferred into May-June and April might be the play. That’s what the forecast is thinking; we are leaning that way, too. 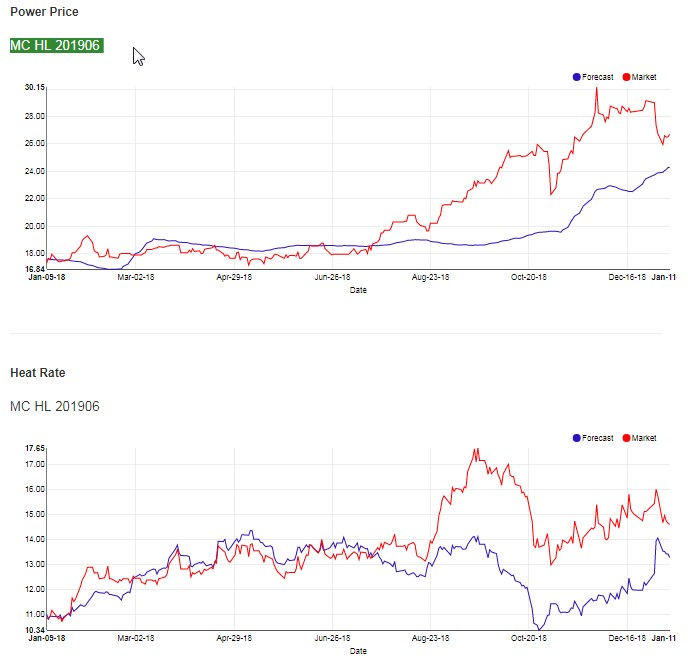 The market sold down while the SWE anomalies plummetted, just the opposite of what should have happened. The Market-Forecast delta is now at a four-month low, that is a buy signal. Plus, I like the Socal Citygate call option embedded in long June MidC. If water is tight and gas is on the margin, which it most likely will be, and Citygate blows up because Burbank hits 100, and the pipe fixes aren’t in place – lots of ifs, right? – this is a must own. 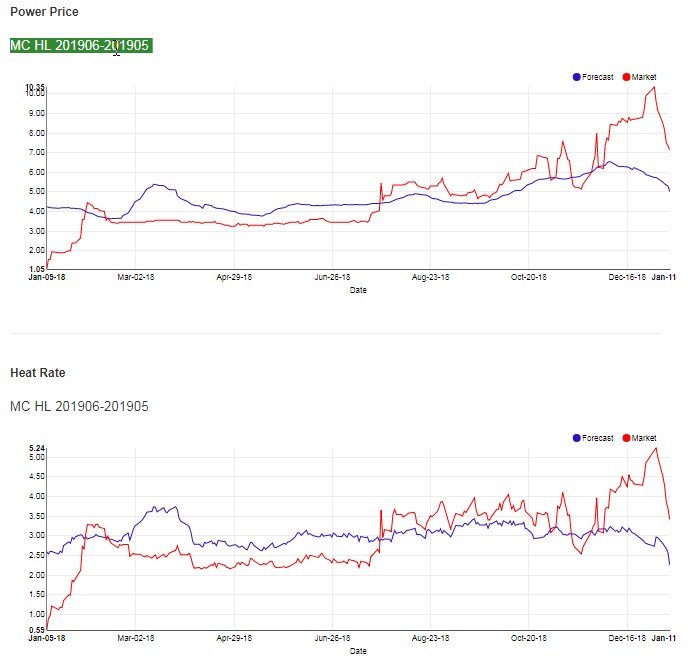 Now the market is liking the May more than the June, relatively speaking, and we disagree, somewhat. At these new levels, I’d buy this. 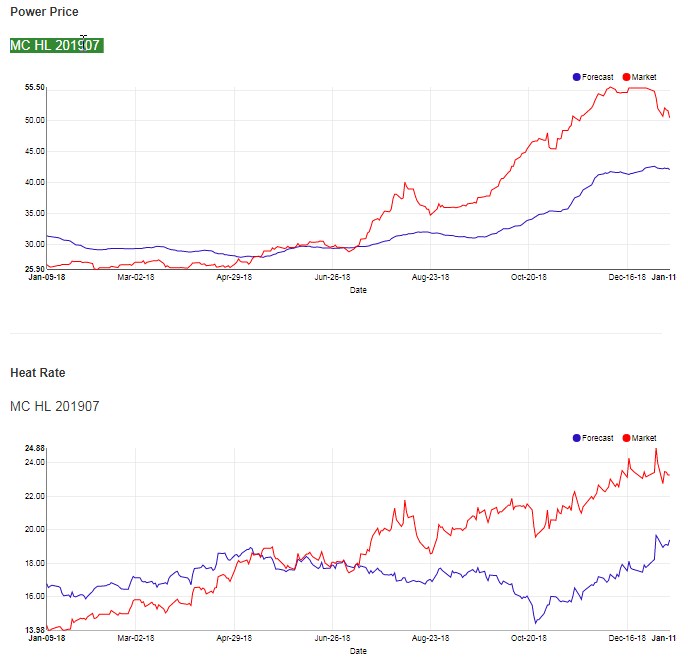 July hasn’t budged, much, while the rest of the MidC curve sold down. Let’s look at the roll before drawing our conclusions. 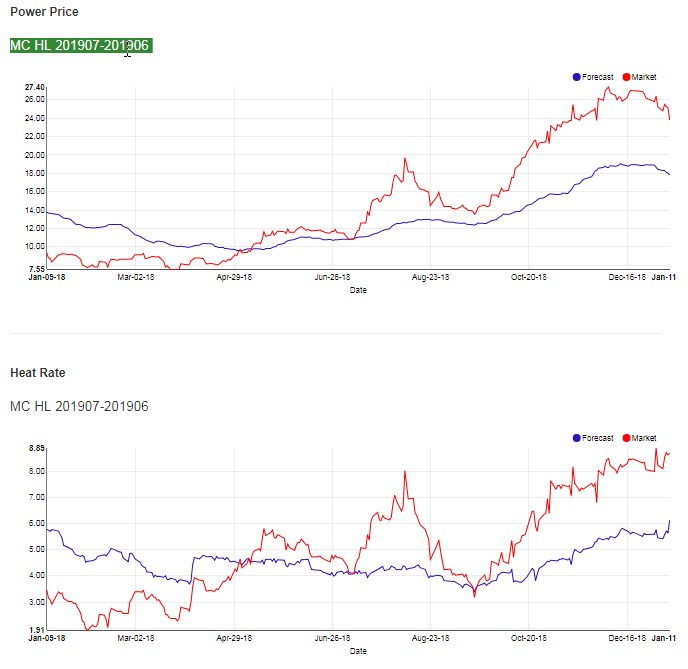 Not cheap in HR or PP. The problem with selling this is it’s a dry year, and both might be tight. Shorting would leave you exposed to a hot July, though if Socal fixes its problems in April, like they claim they’ll do, any embedded Citygate blowout premiums will melt away as those Westcoast Pipeline ones so recently did. 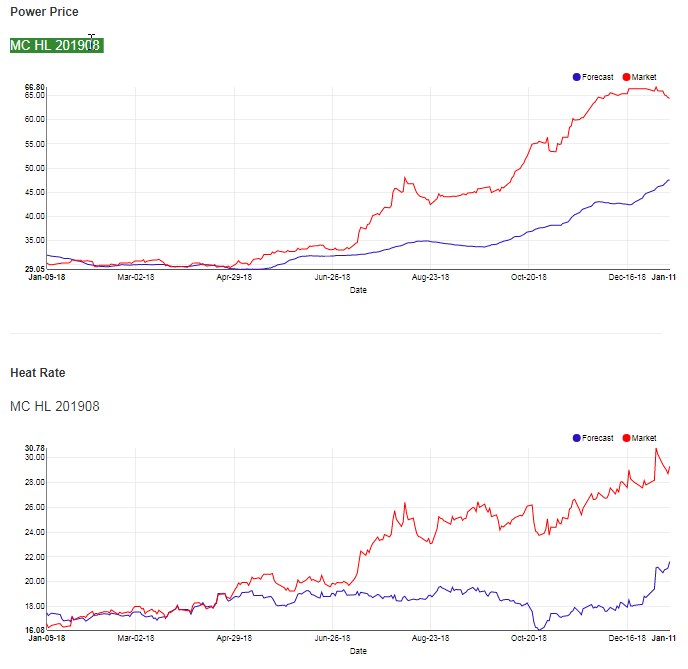 August isn’t cheap, it is rich, in every sense of the word. Too far out in the curve to care about in mid-January. Pass. 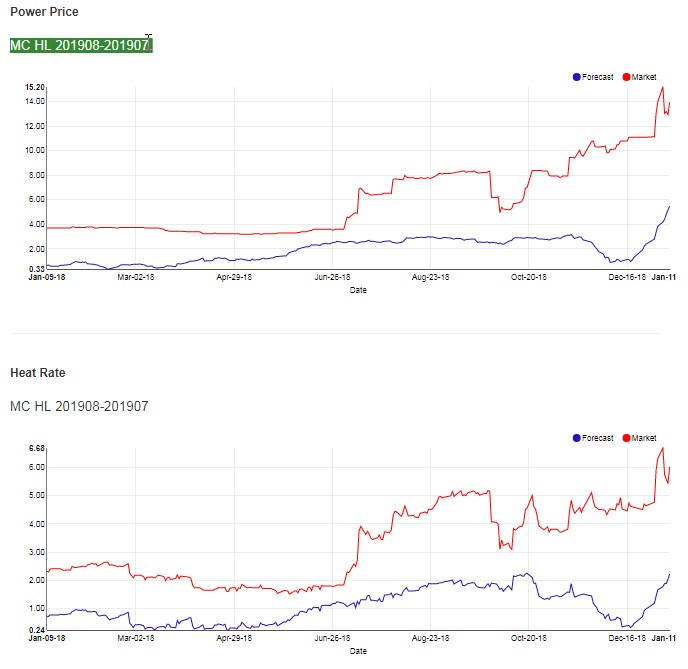 I do care about this in a dry year. The chances of snow-melt in July are low meaning the two bullets should trade closer to flat; this roll is rich HR and PP, and we’d short it. 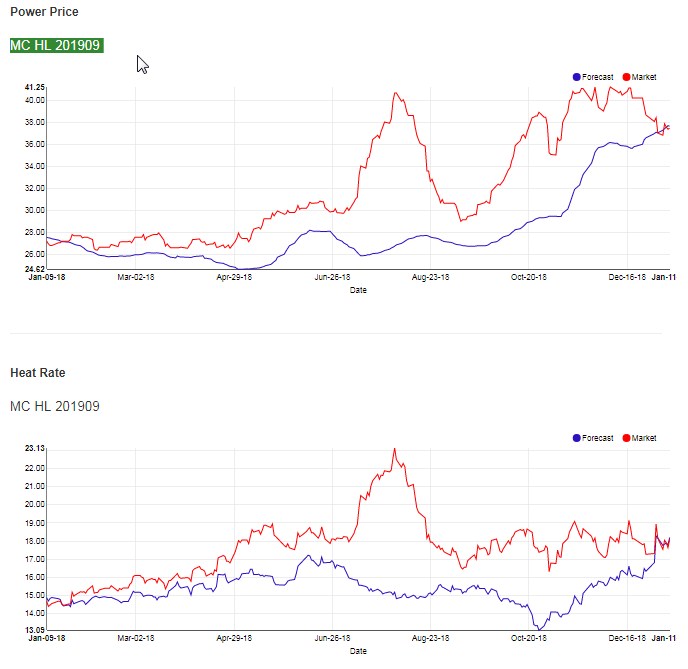 Sep’s slipped and priced more reasonably than not. PASS