It is nice to be back on a regular schedule, sometimes. The markets are back on schedule, very bearish in Winter with hopes of screaming high summer prices. Right now, we only see weakness, though the front of the curve found a bottom late last week after a torrid four-week slide: 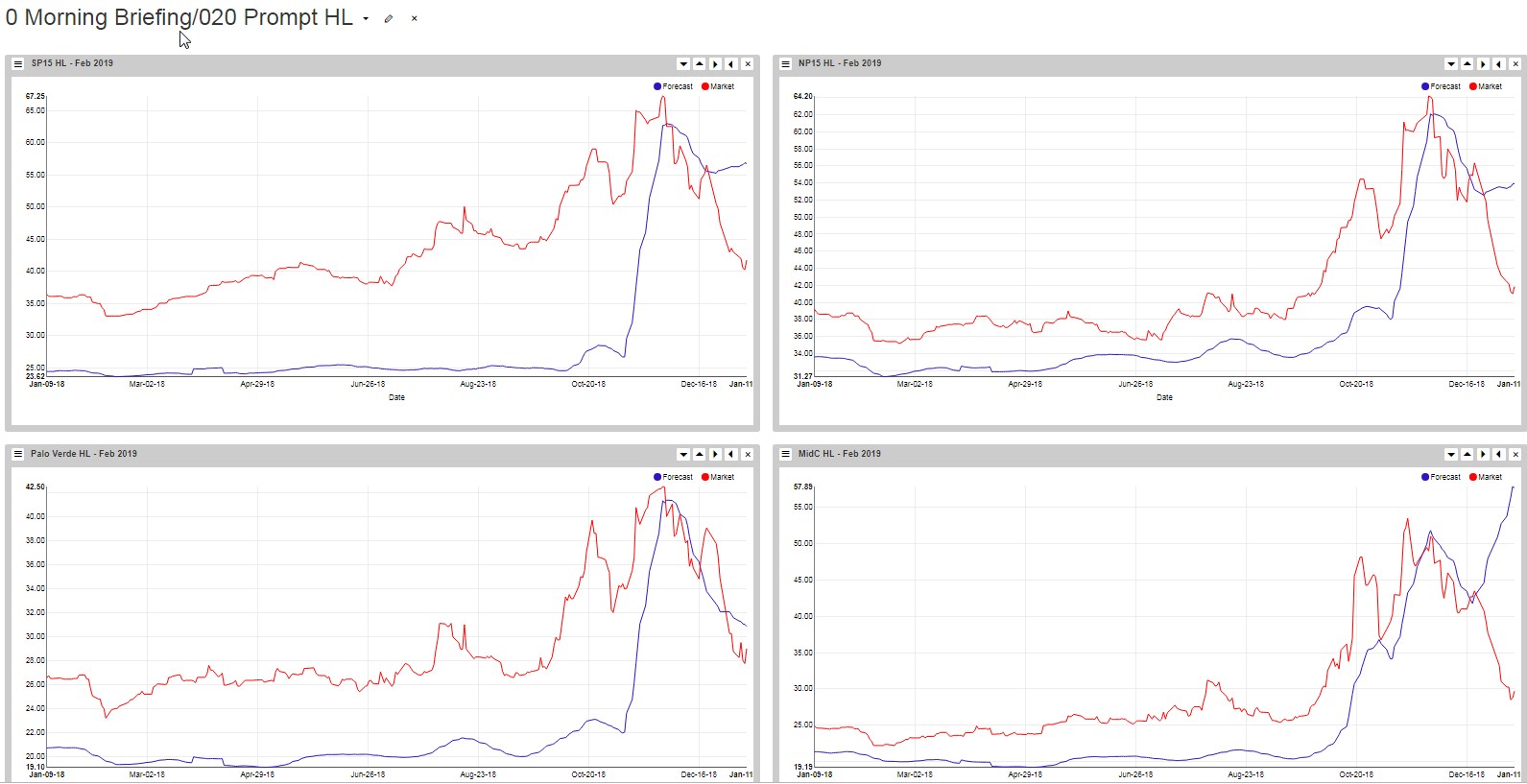 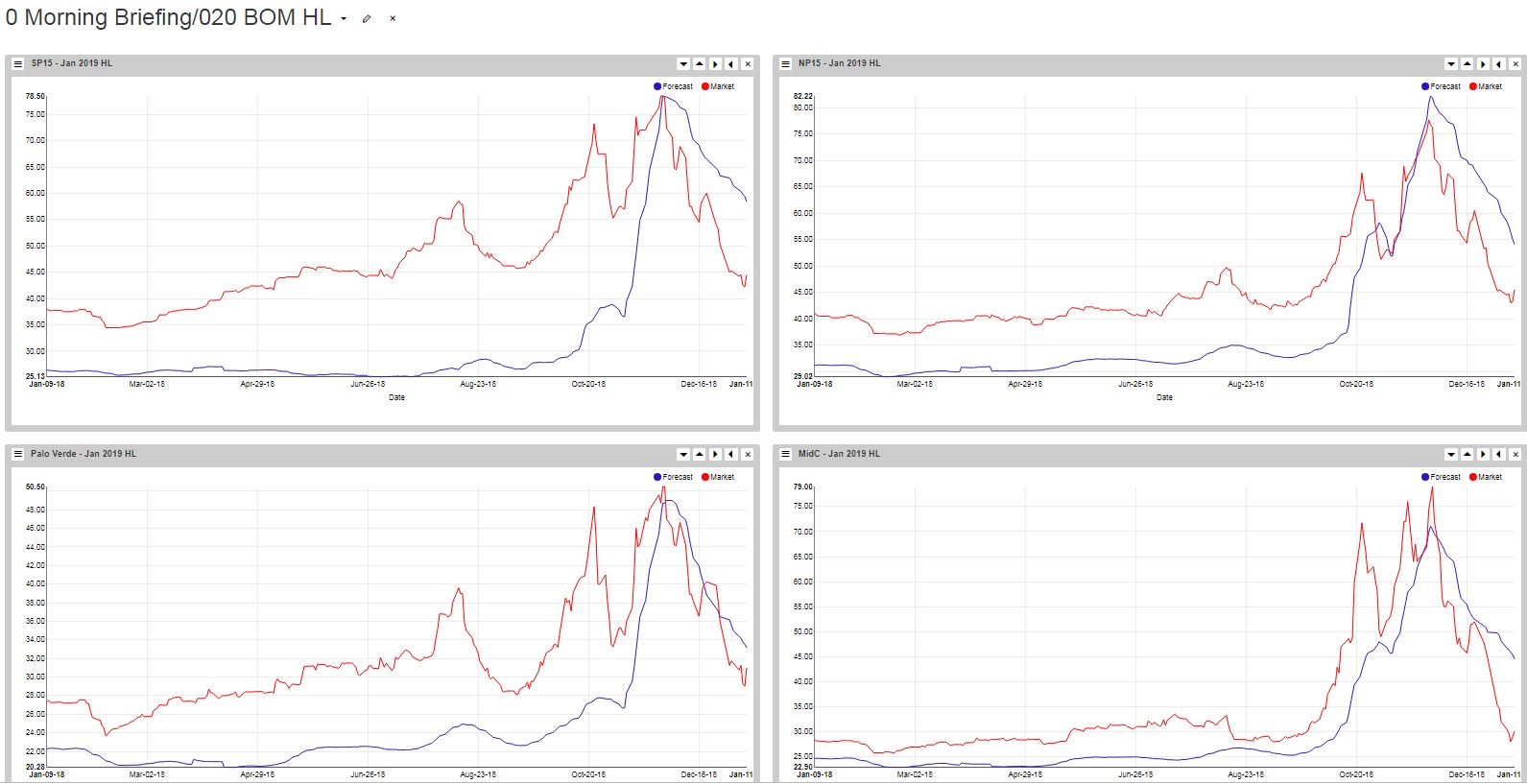 Not much of a bottom, but after the Holiday Selloff it seems significant. That was an epic bear market, and much of the reversal was driven by an early restoration of Westcoast’s pipeline operational capacity. Here is are the posts for imports into Huntingdon from last year and the most recent. 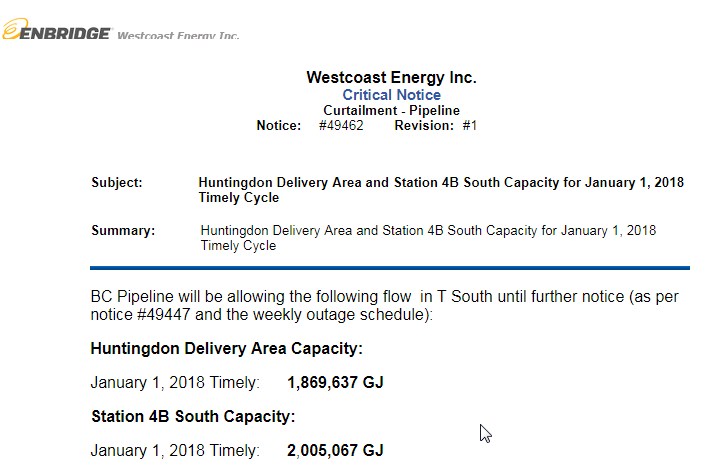 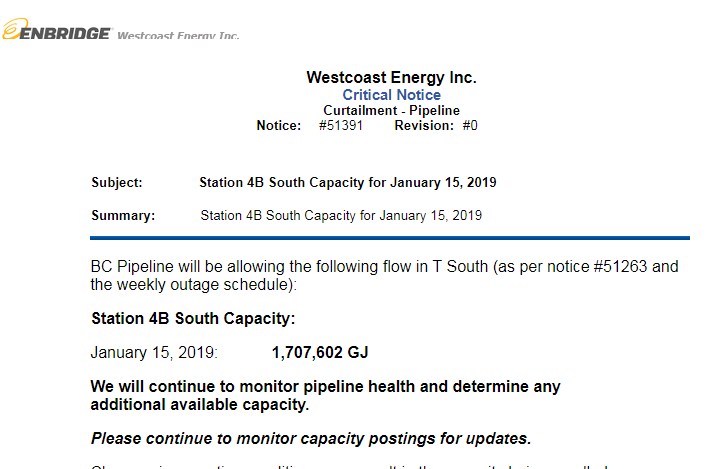 Last year, the Huntingdon Area delivery capacity was just 162 GJ higher than today; in other words, the Westcoast debacle is one for the history books.

The spot gas markets reflect the overall weakness; Socal Citygate is off $3.00 in ten days, and now PG&E Citygate is trading just $0.80 beneath. 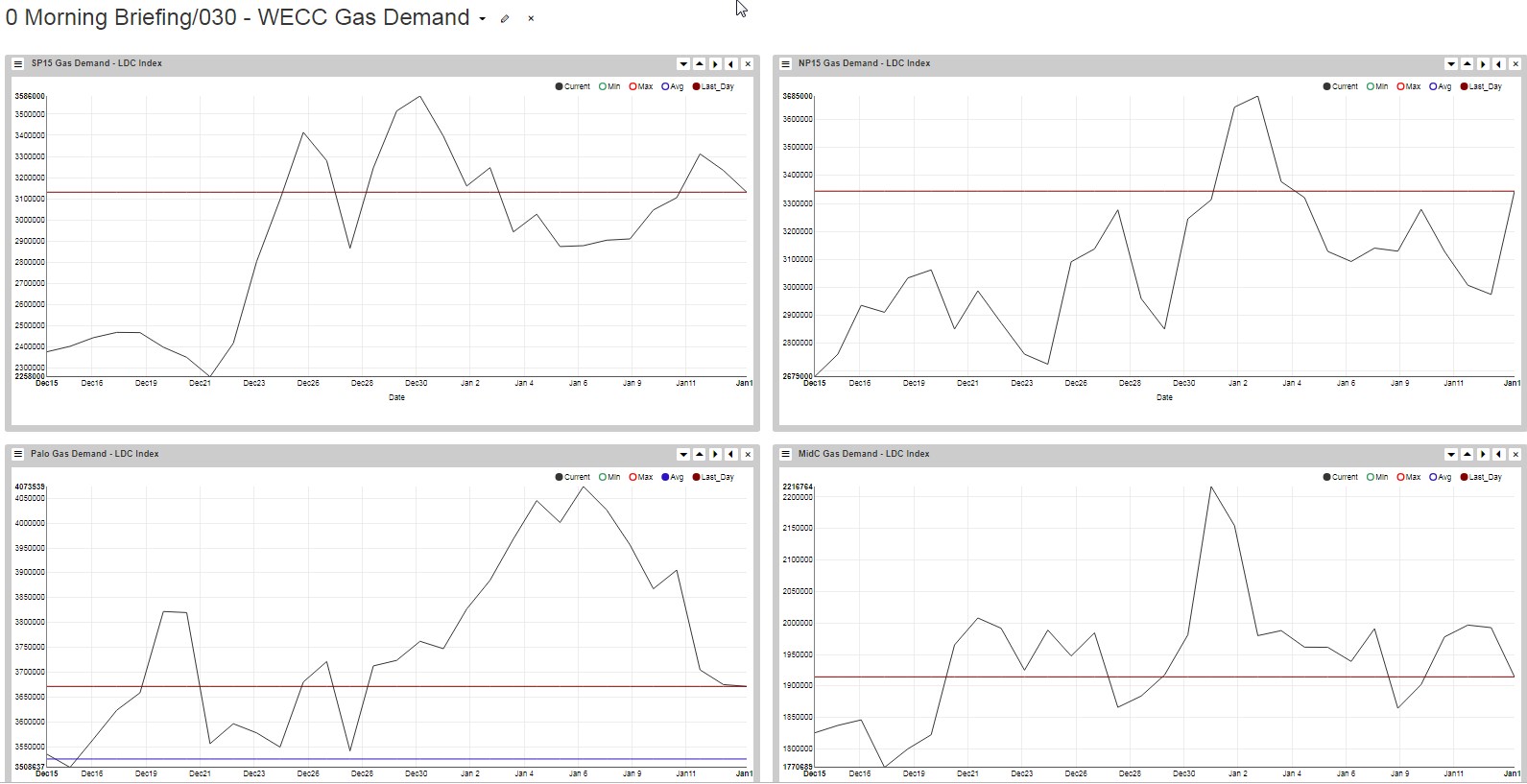 The west’s gas demand is off hard in the Southwest and just weak everywhere else, driven by warm and wet weather – both realized and projected. 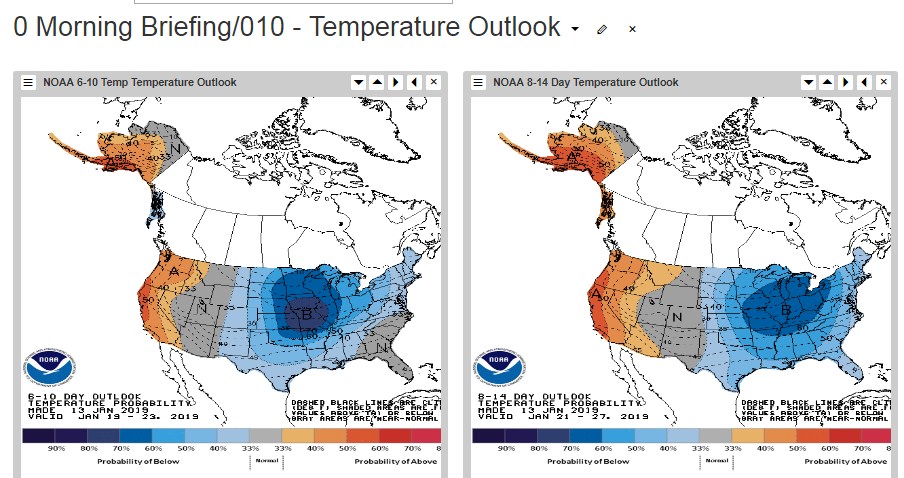 Sunday’s NOAA made a bullish turn for the mid-west and east coasts; the load-center WECC remains mired in above average temperatures, though this forecast was cooler than Friday or Saturday’s. 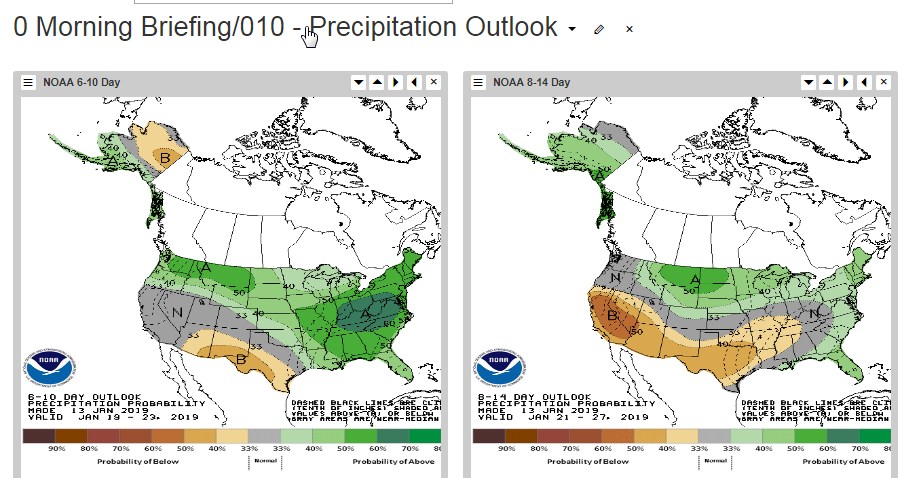 It isn’t as wet, either. California goes dry while the Northwest stays above normal through the 14-day outlook, though Sunday’s forecast was dryer for both than Friday’s.  But warm only means snow in the higher elevation which leaves the lower levels snowless in January. A few years earlier we wrote of low-level  snow, and its big impact on Feb March flows; this year is just the opposite, very little low-level snow, which is the first to melt, all of which suggests weaker natural river flows in March and April since it takes much warmer temperatures to melt the higher elevation snowpack. Toss in a very low draft, and maybe there is a sleeper buy out there? 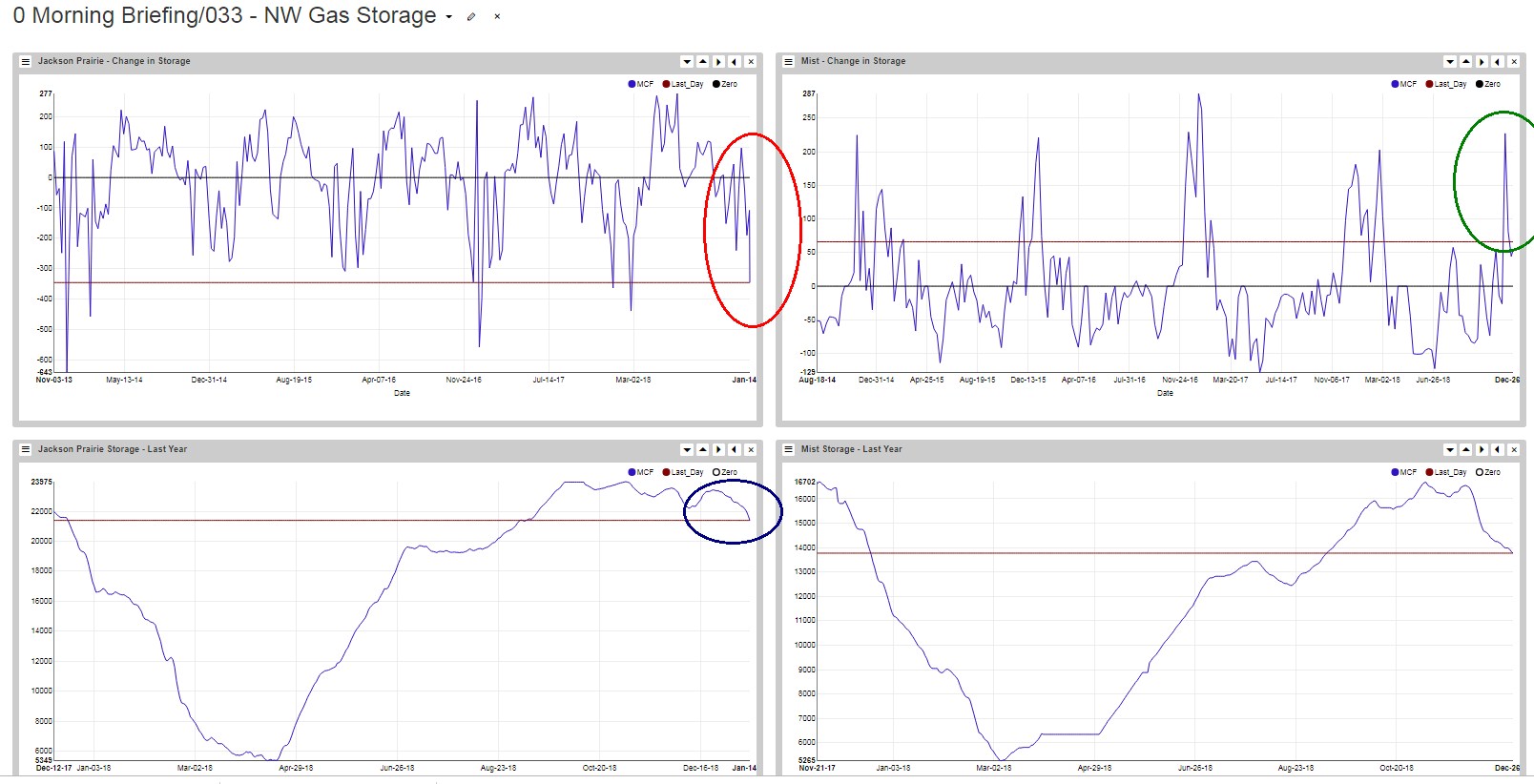 Jackson Prairie is finally pulling gas and seems to be working with Mist. Where Mist drew down its gas throughout the Westcoast pipeline constraints, Jackson did nothing. Now it seems the operators are pulling gas, even when it isn’t needed. Call it gas lending, JP draws, and Mist fills, but doubt Mist needs to put much more back in, not given current weather outlooks. 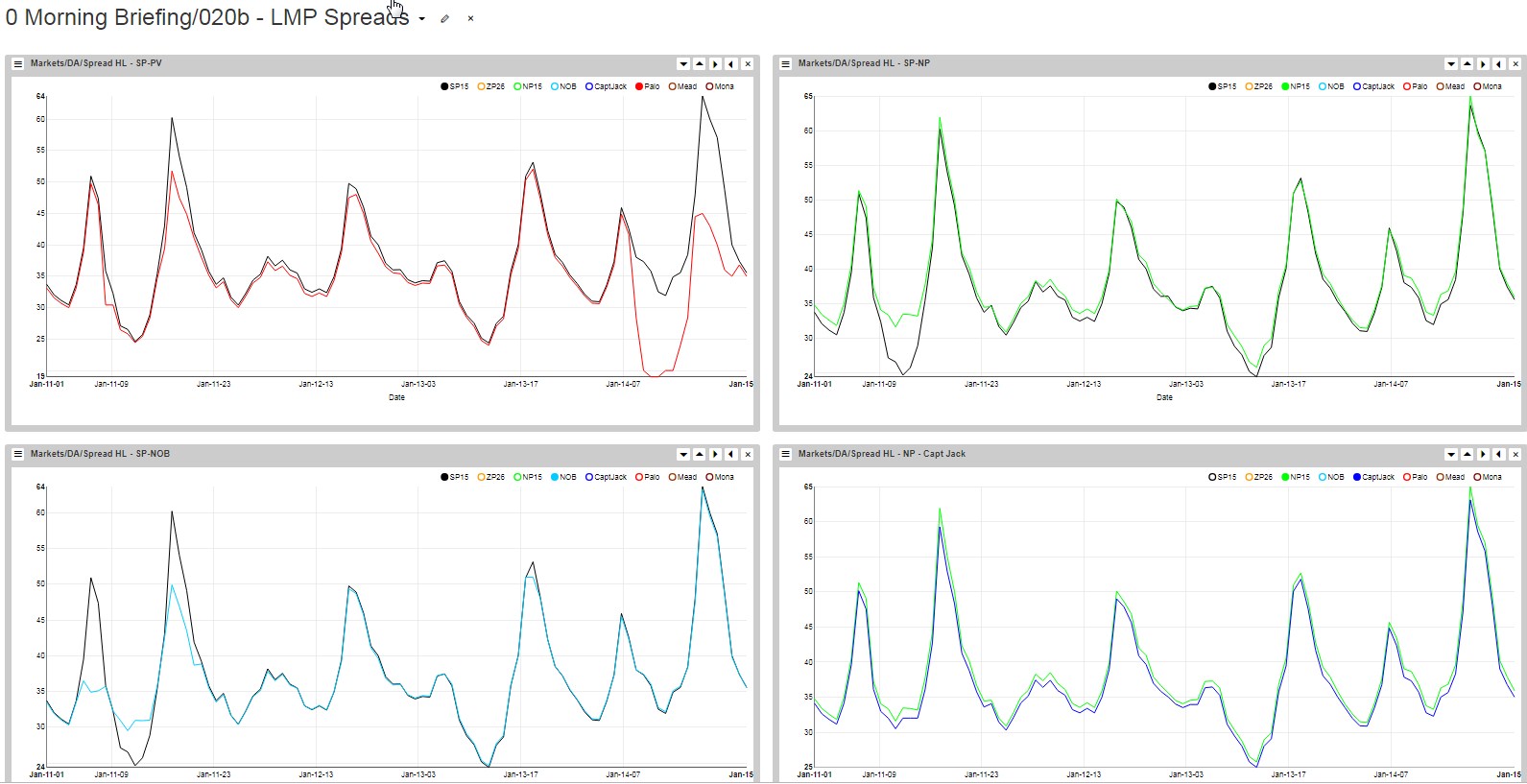 Aside from weak overall prices, the only thing that jumps out of these four plots is the massive Palo congestion to SP — not seeing any of that at COB or NOB, or congestion pricing between SP and NP. Not surprised at the latter, not given the $3.00 collapse in the two citygate cash spreads. 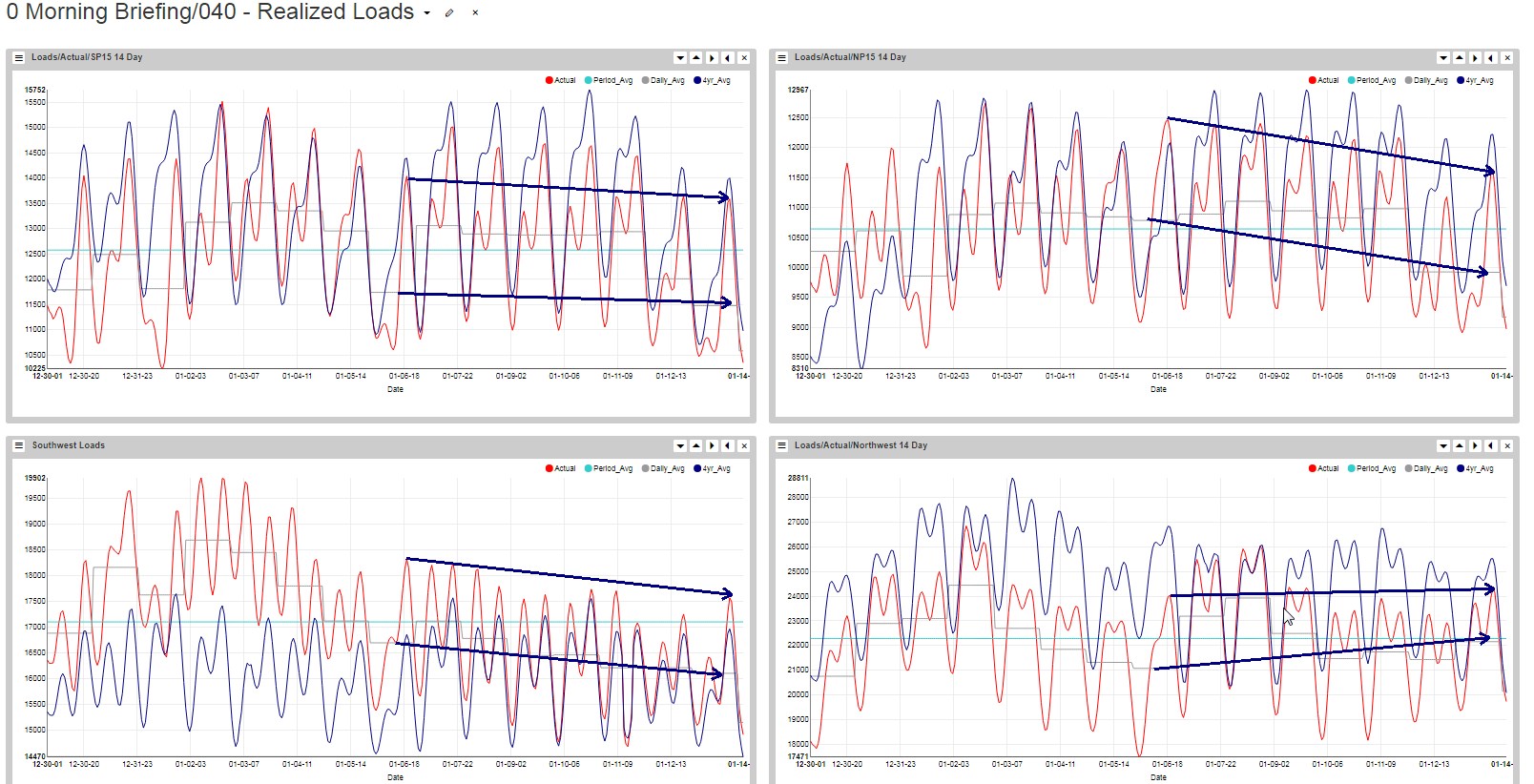 Power loads are off, except at MidC which saw a slight bump, week-on-week. A rally off of a very warm day last week. Yesterday, in Seattle, it was sunny and warm, one could have played a round of golf. 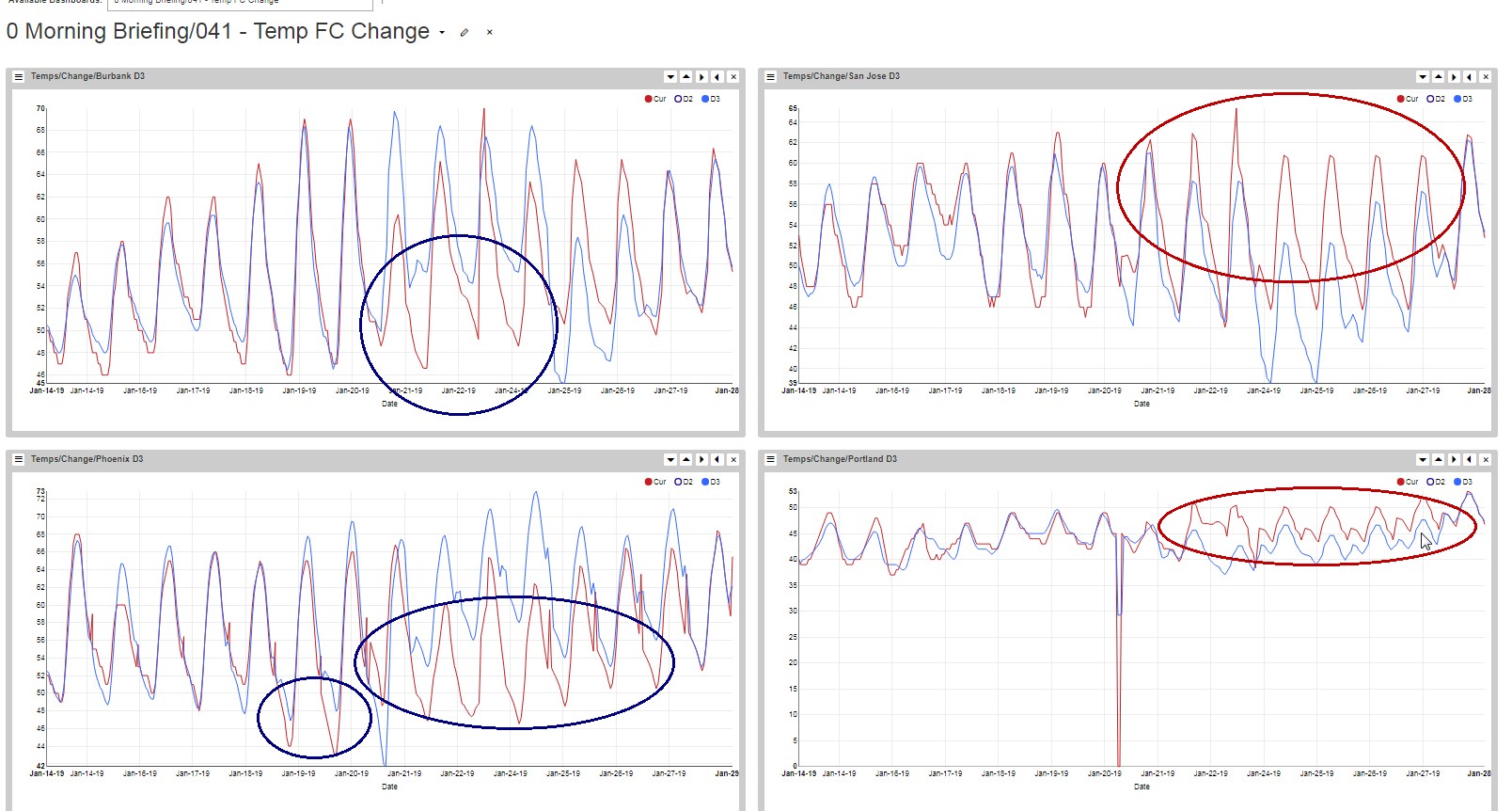 We know it is warm per NOAA, here is the hourly version. The forecasts in Burbank grew a shade cooler in days 7-10, warmer at San Jose, colder in Phoenix and warmer in Portland. Nowhere is it cold, no sign of a demand-driven rally. 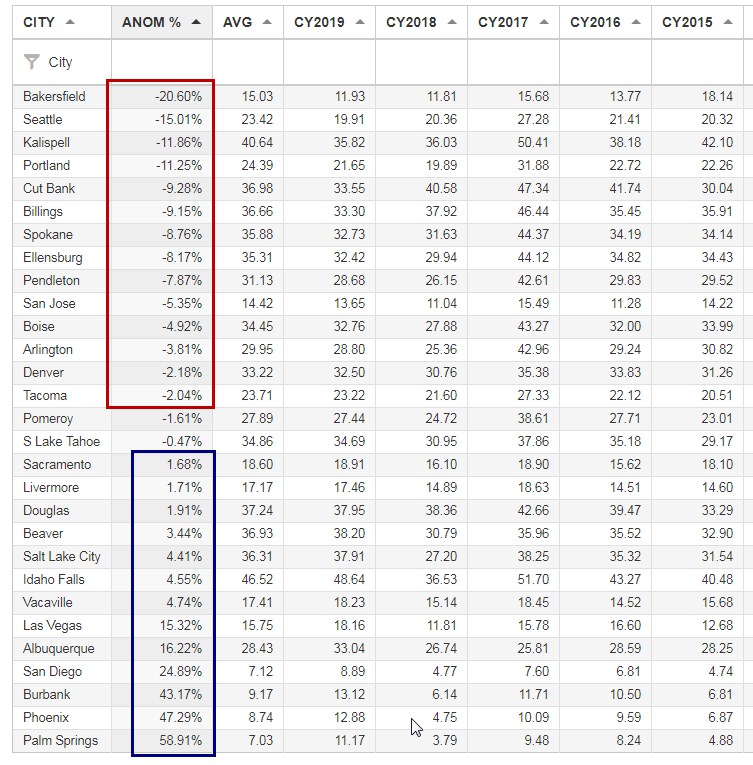 It is almost the middle of the month and time for a degree day recap, month-to-date. I would have guessed all cities were behind average and would be wrong; instead, half the stations have positive anomalies, half negative. The south positive, the north negative. 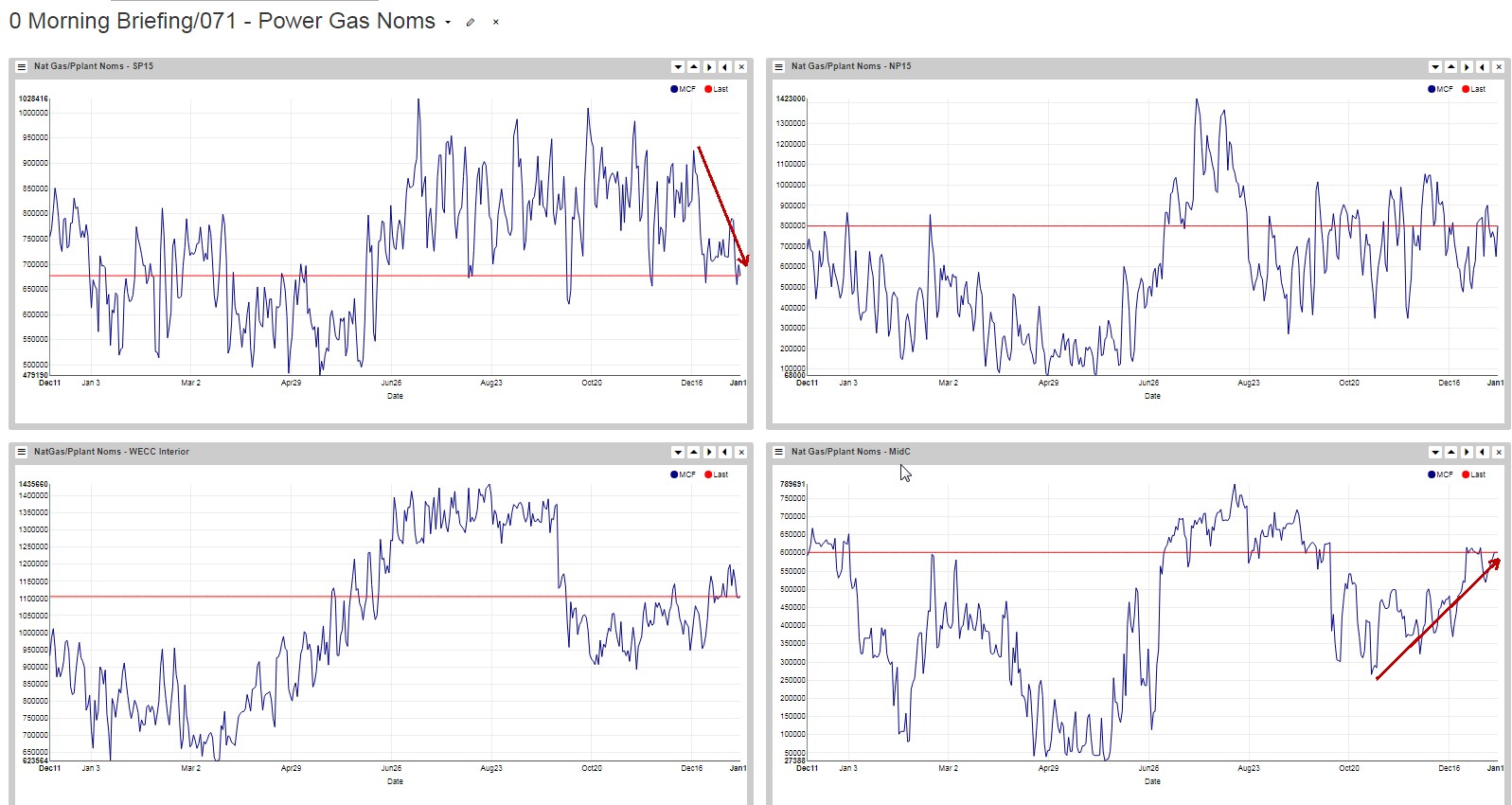 SP15’s gas noms are off, NP’s sideways as is Palo’s, and the MidC’s have rallied but only because the I-5 turbines are now burning that cheap Sumas gas. 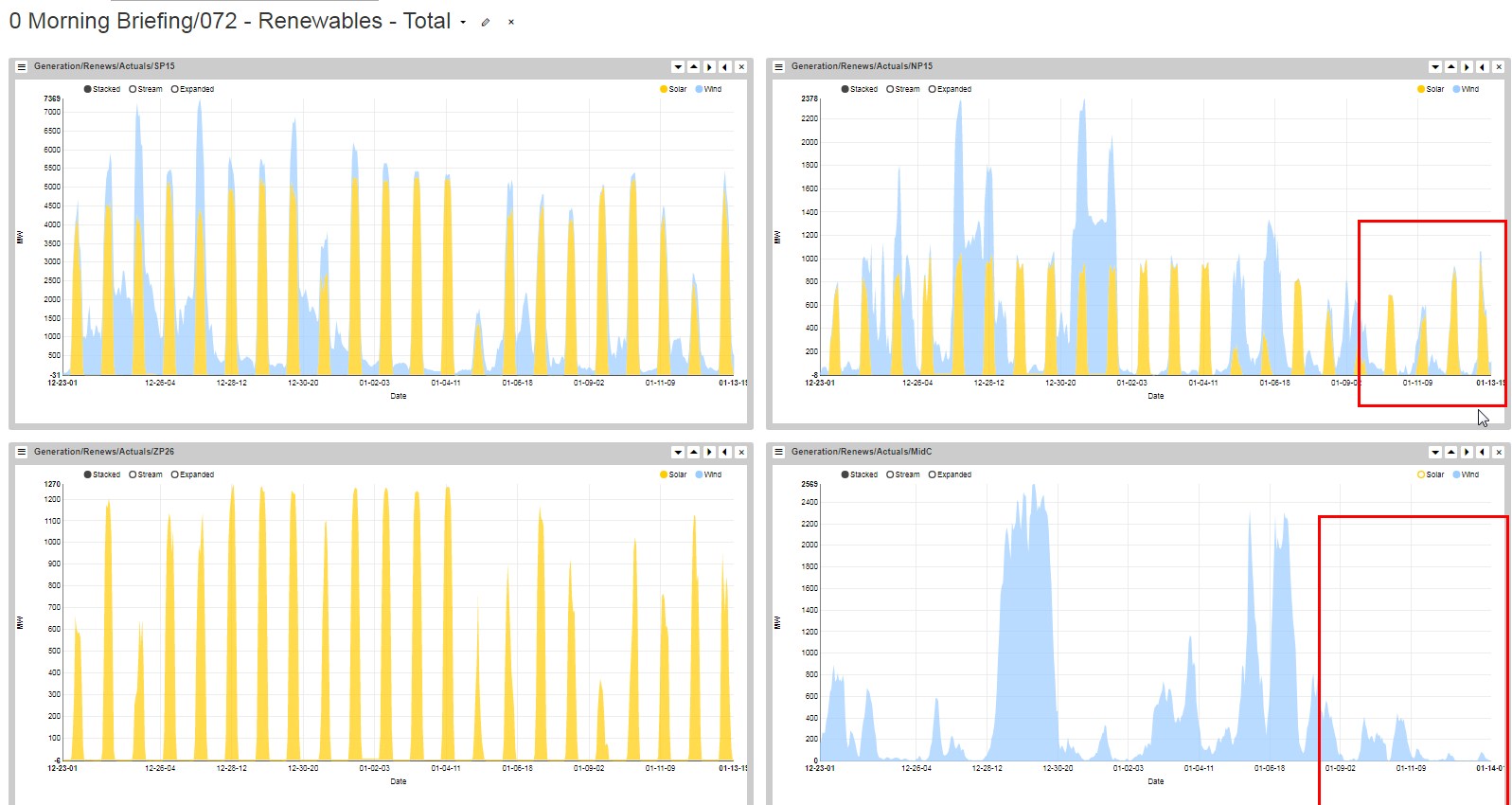 NP and MidC were becalmed the last few days, and the ISO’s solar has mostly recovered from the rain which pounded that fair state.

The top two tables summarize the MidC on a week-on-week basis while the bottom two are the same, but year-on-year. Both hydro and thermal are up versus three weeks earlier yet each is lower when compared to 2017 or 2018. 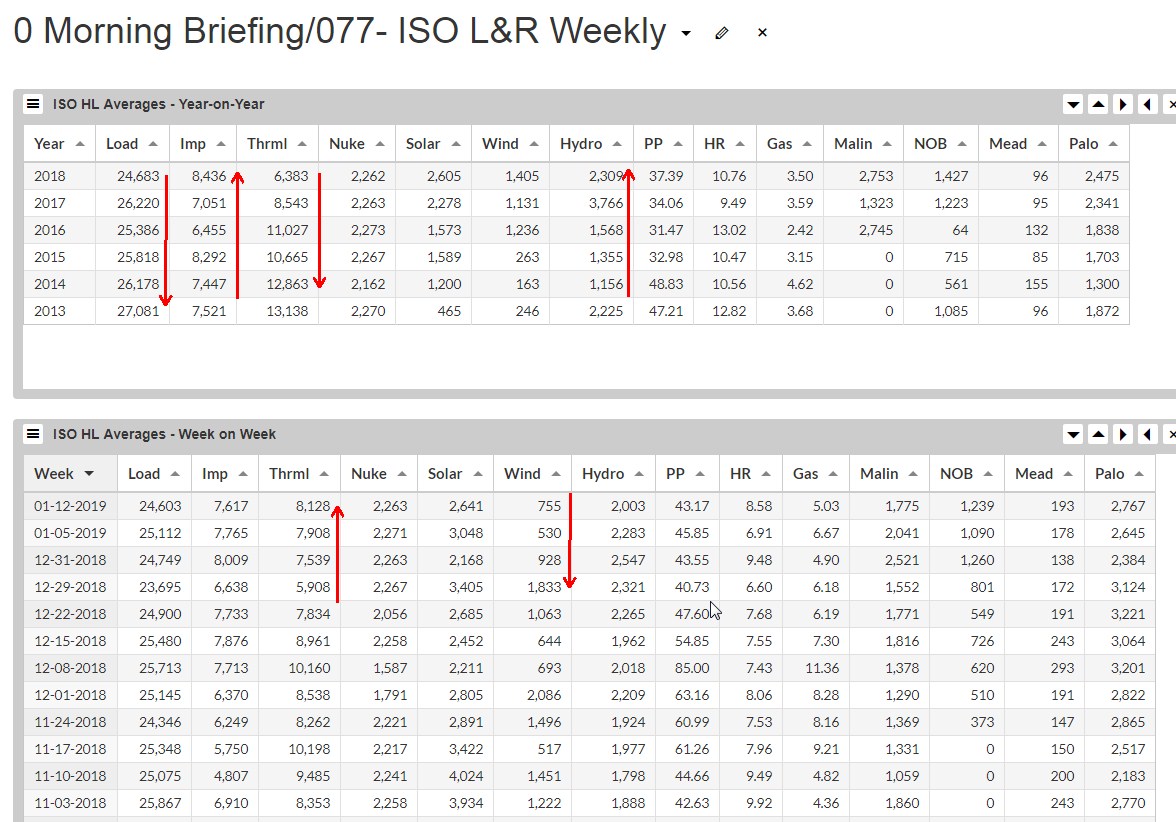 A similar report, this is for the ISO. The top table is the year-on-year, and the bottom is the week-on-week. The dashboard has the LL if you want to see it. Loads and thermal are off when compared to any of the previous six years, while imports are up; hydro is up compared to the 2013-15 periods and off slightly from 2017-18.

California’s water supply is up in the north and down in the south; the latest storms had a northerly bias. Still, the state is in an average water year which is anormal given the ten-year drought and suggests sometime between April and June a runoff-driven surge of hydro will be realized, and it won’t be just a few days. 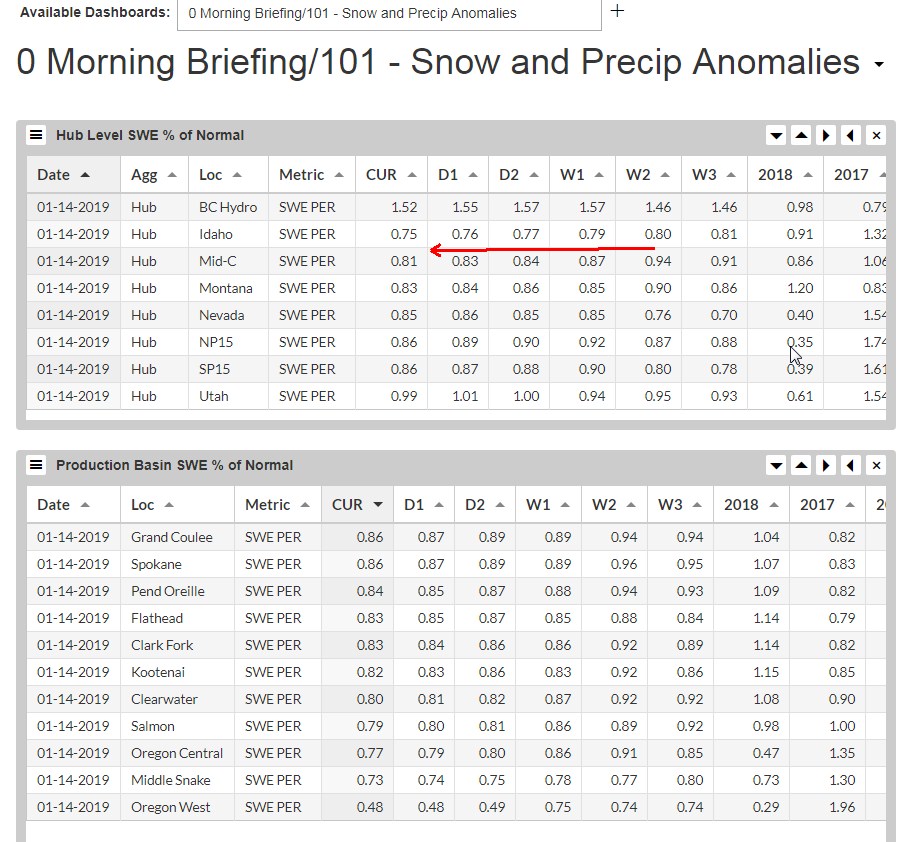 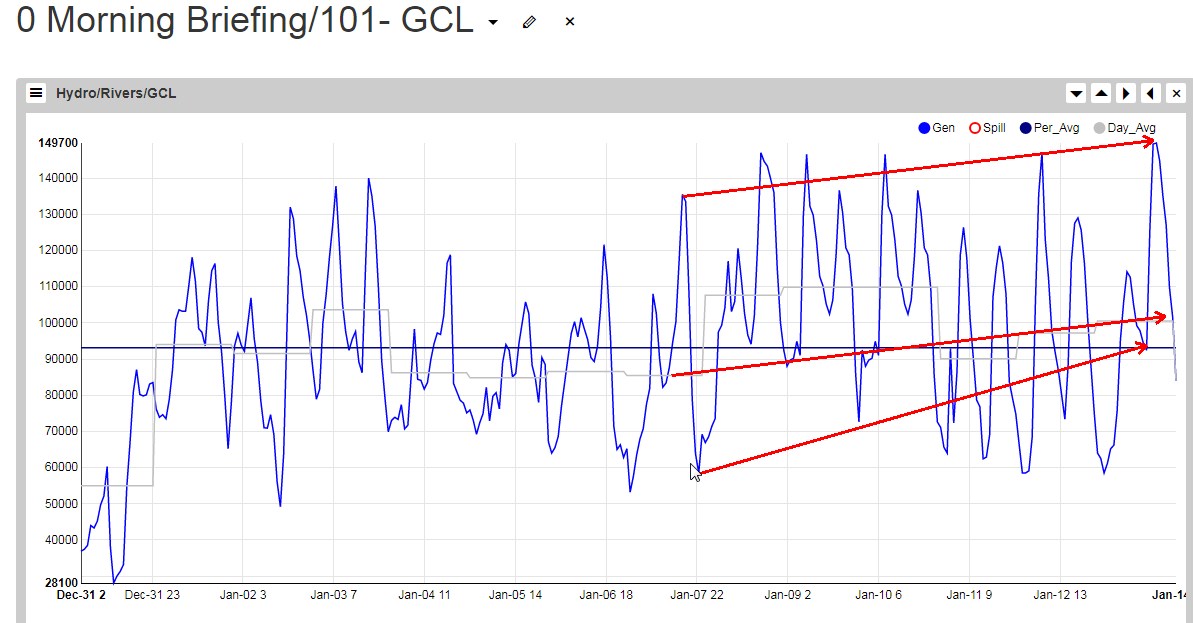 DIscharge at Coulee is up and camped within the historical range: 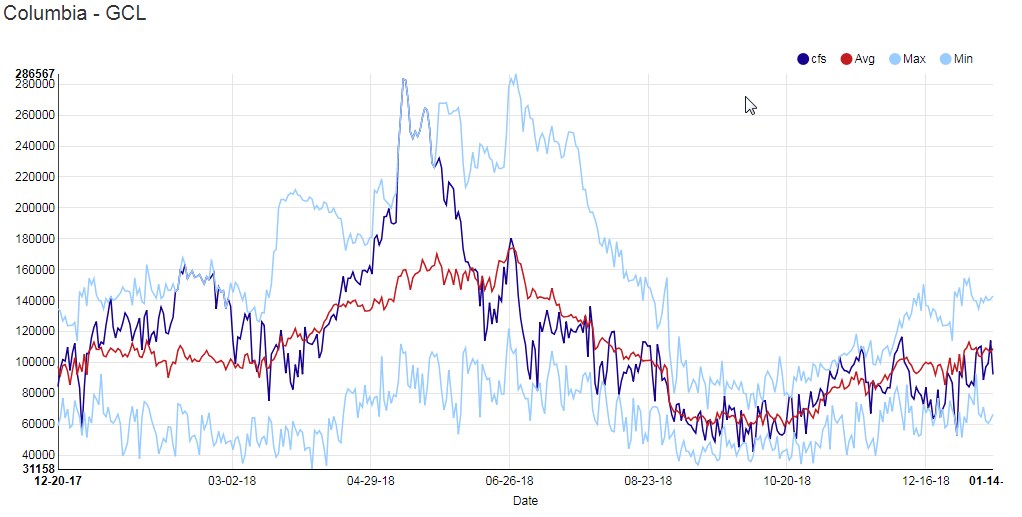 After several wet years, the MidC is about 10% behind 2017-18 and lends a bullish feel for how the runoff may play out.

Discharge below Williston (Peace) is up and not sure why? BC loads are sideways to low and the ute is not exporting to the USA.

The storage (water) outlook has brightened, the MidC’s aggregate reservoirs are converging back to normal after lagging as much as a MAF; BC’s remain below average and California is above. 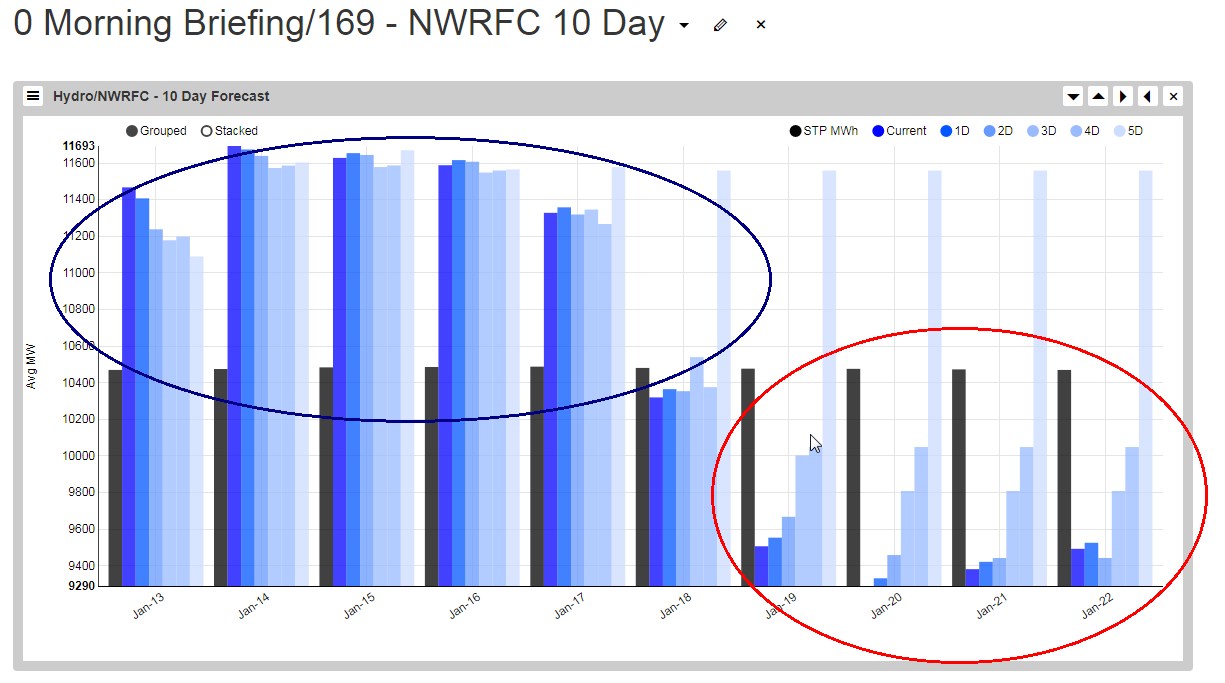 Today is the STP and we look to the 10-day for a tell and we get none; expect another random forecast. The front of Friday’s 10-day is bearish and seems it’s a case of render to Paul to pay Peter. 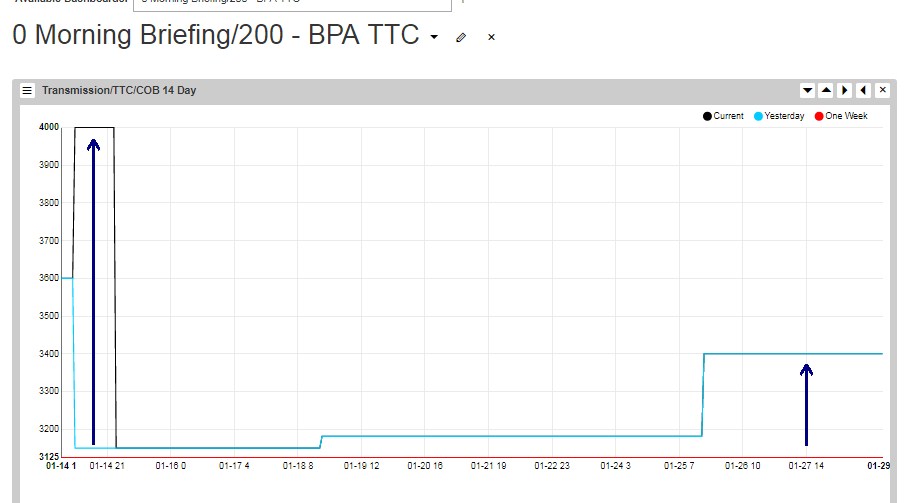 A few tweaks to the COB TTC; both uprates.

The Northern Intertie has grown dormant, nothing flow north or south. The DC has been full but is off, week-on-week; so is the COB but that’s because of the TTC derates. The IPP line is amidst a big derate rendering PacEast long.

Nothing bullish except cheap term prices. Given a bounce (dead cat?) on Friday, perhaps it is a sign to go long? Hydro-wise we’d be long-biased, even in the ISO, but we’re months away from seeing melt-driven streamflows. Now it is all about regulation and timing, so we fall back to the tried and true – fade anomalies. More on that in the next post.