Hard to believe many of you are working today, but I am and there are some new developments to consider. Let’s start with the weather – where would we bloggers be without weather to feed our blog fodder? 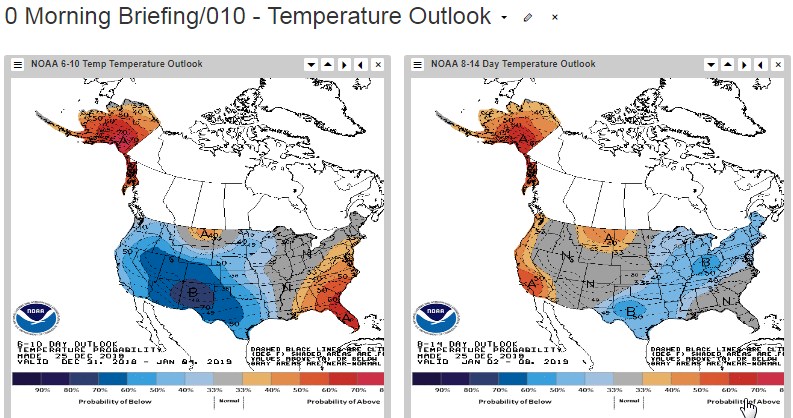 Earlier in the holiday break we saw both the 6-10 day and 8-14 post cold anomalies; now just the 6-10 day has them. It’s cold in Four Corners and mildly cool everywhere else in the WECC. The sky’s not falling with this forecast but demand will rally across the WECC and Socal Citygate will get another test.

With the high-pressure cold comes dry… 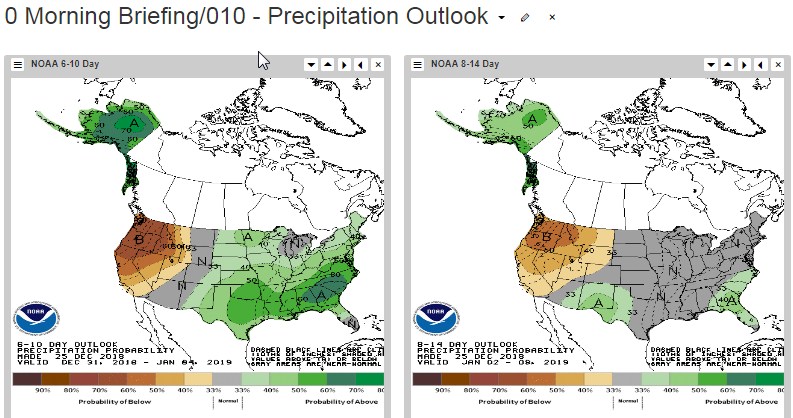 Seems the MidC wet trend is broken, let’s see what that cumulative impact has done to the snow and precip anomalies:

The MidC went from the high 50s (SWE % of Normal) to 92%, but now its poised to start dropping right in front of the first Flood Control release (Jan 10? – the date’s not published yet). Still, we’d guess the Apr-Aug TDA posts around an 88 given the draught:

What  that suggests is minimal drafting in the Northwest which is bullish for Feb-March; the reservoirs already have holes:

Mica is at a 10-year low; Coulee is seven feet behind last year but filling. Things are still tight, water-wise, but not in gasland; in that world things have turned a bit bearish. 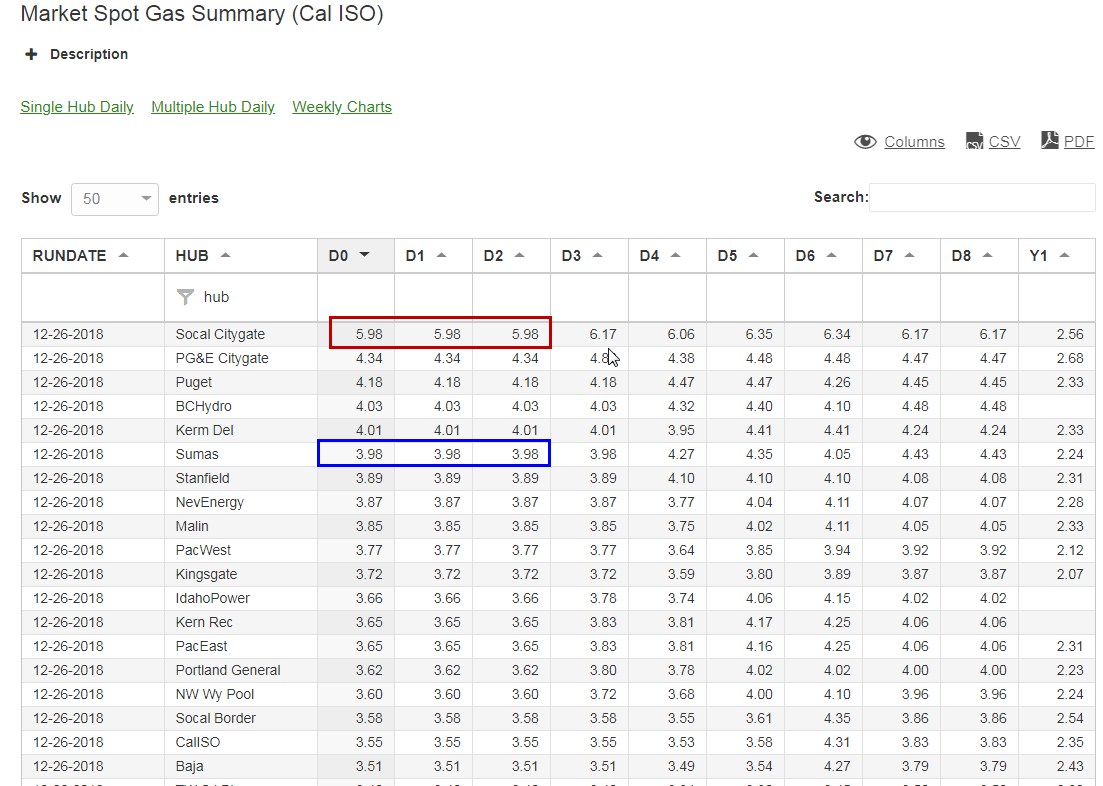 Sumas is now trading $2.00 under Citygate and we doubt the hub sees double digits any time soon, or at least not until Westcoast blows up its pipe again. Citygate (Socal) is interesting, the forecasts are showing Burbank toying with a 30 handle for lows: 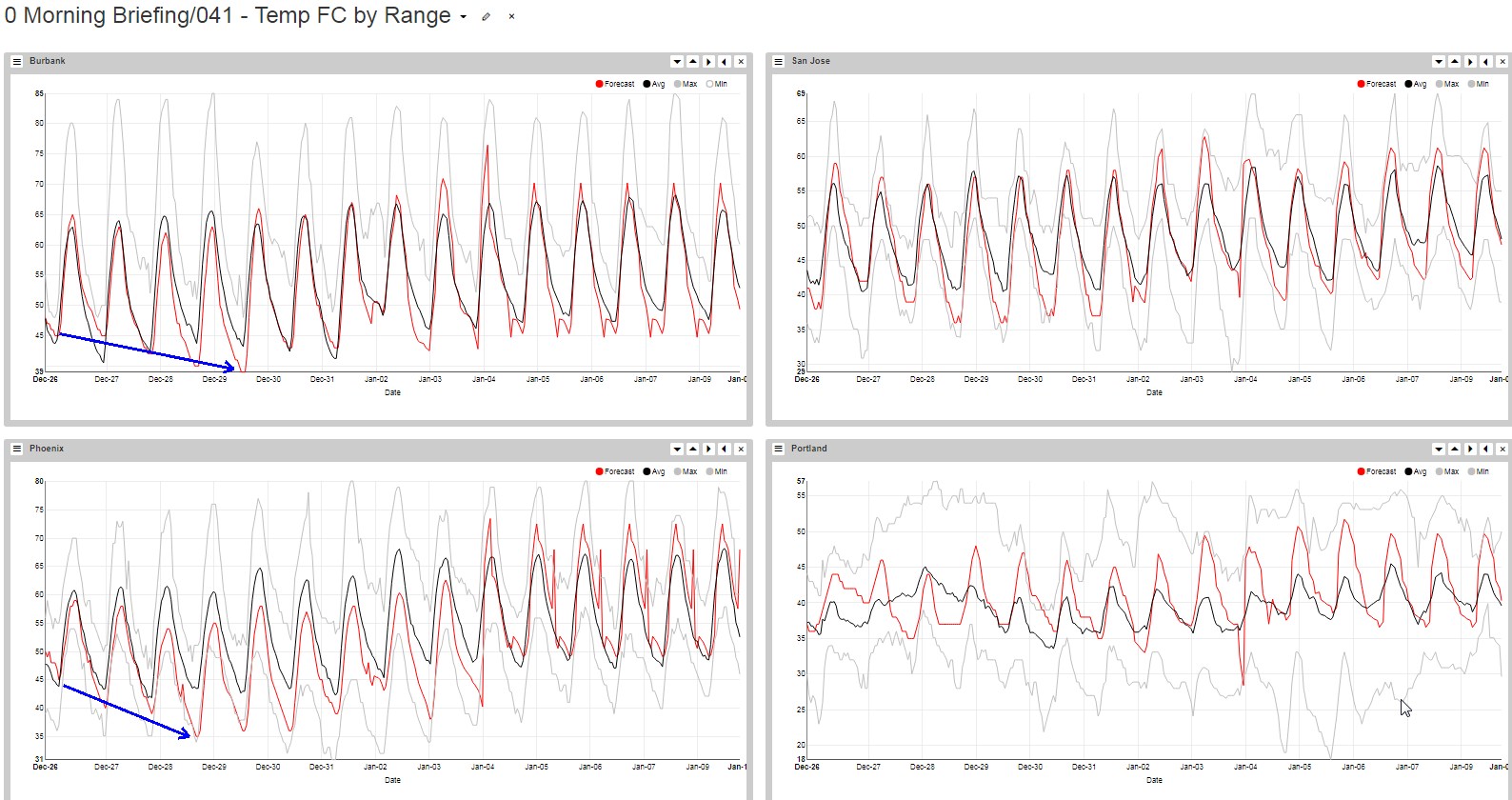 38 degrees over the weekend, that is colder than the last cold event and we should see Sendout soar, we already are! 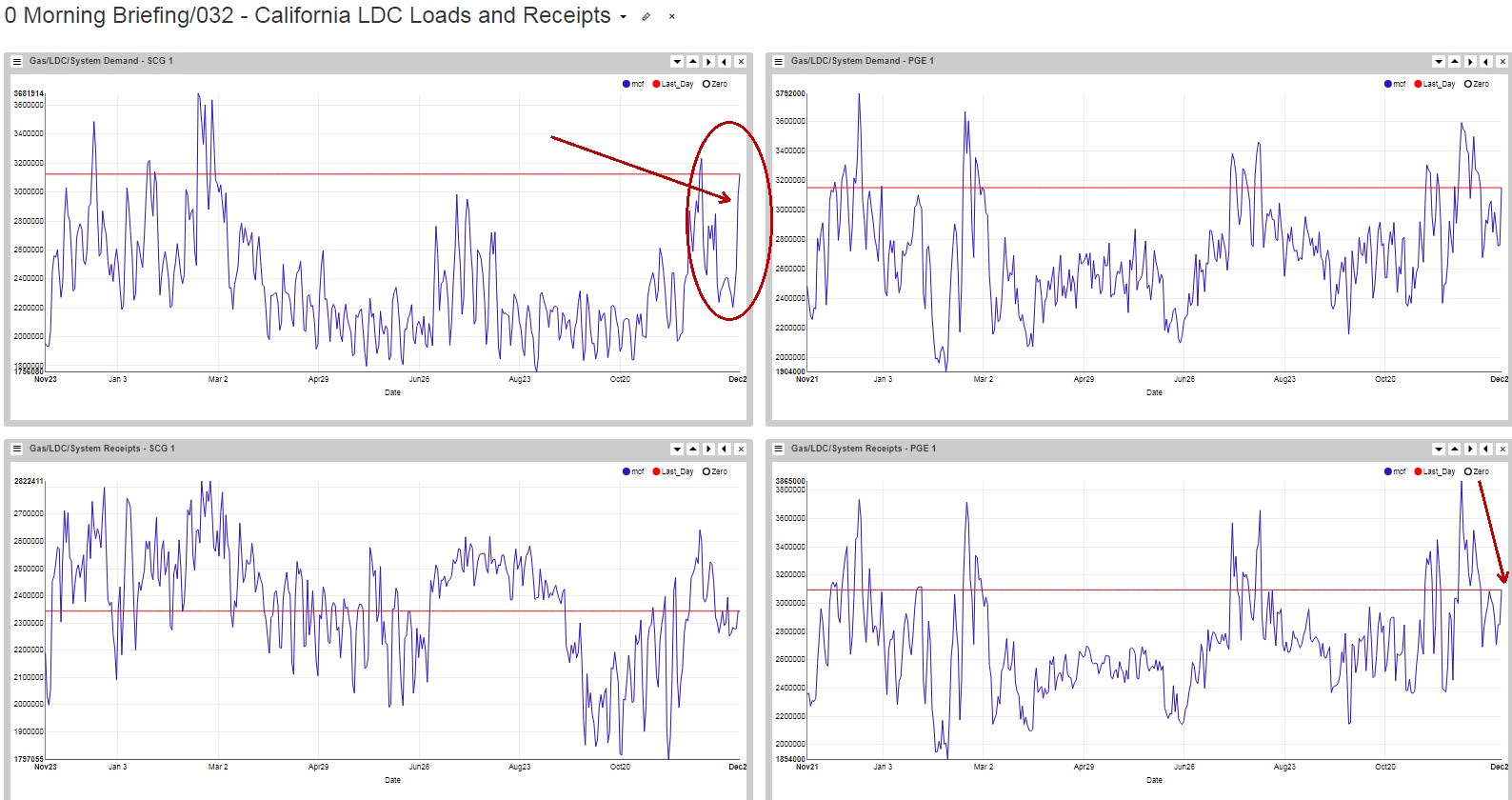 Check out the gapping going down in Socal Gas’s system;  total sendout is up 900 MMCF in a week and only a few days last winter had higher demand, and it is growing colder. Back to the Sumas debacle; we don’t see how it can rally hard without constraints on imports and we’re not seeing big ones any longer.

Sure, the pipe isn’t flowing at the same levels as last year, we’re still short about 400 MMCF at Station 4 which leaves Sumas 200 short. That is kind of bullish, right, until you realize that Enbridge has the capacity to fill the pipe and will fill it should demand demand the gas. In other words, there is a 200 MMCF long put at Sumas should things grow bullish.

Another bearish bullet in the long’s back are the storage levels at Jackson Prairie: 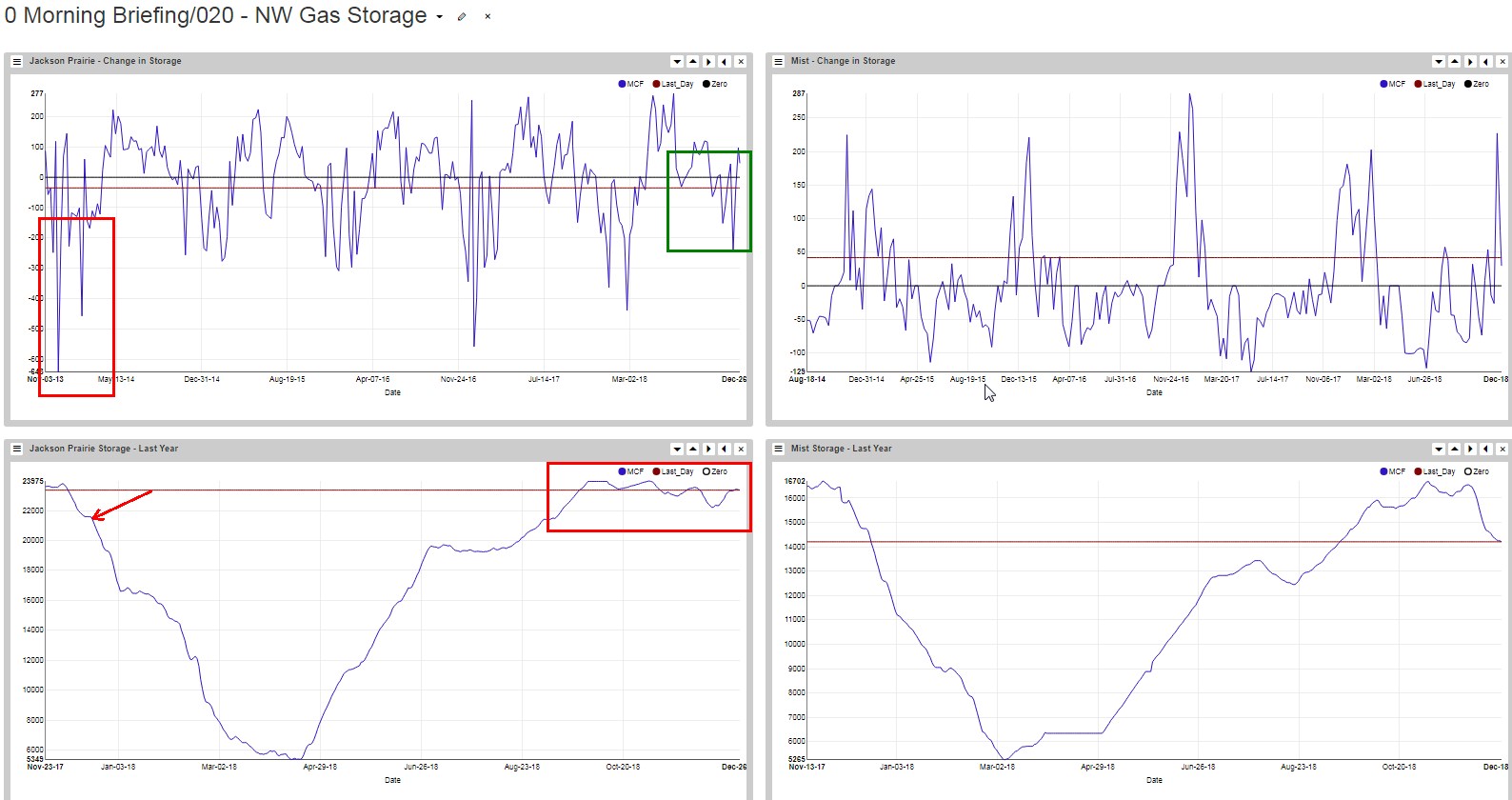 You’d expect JP to have pulled hard during the Westcoast curtailments but you’d be wrong. Total storage is higher today than the same day last year. Mist pulled, but not JP. Two reasons for this:

Regarding #1 – not that cold – check out these December cumulative degree day anomalies: 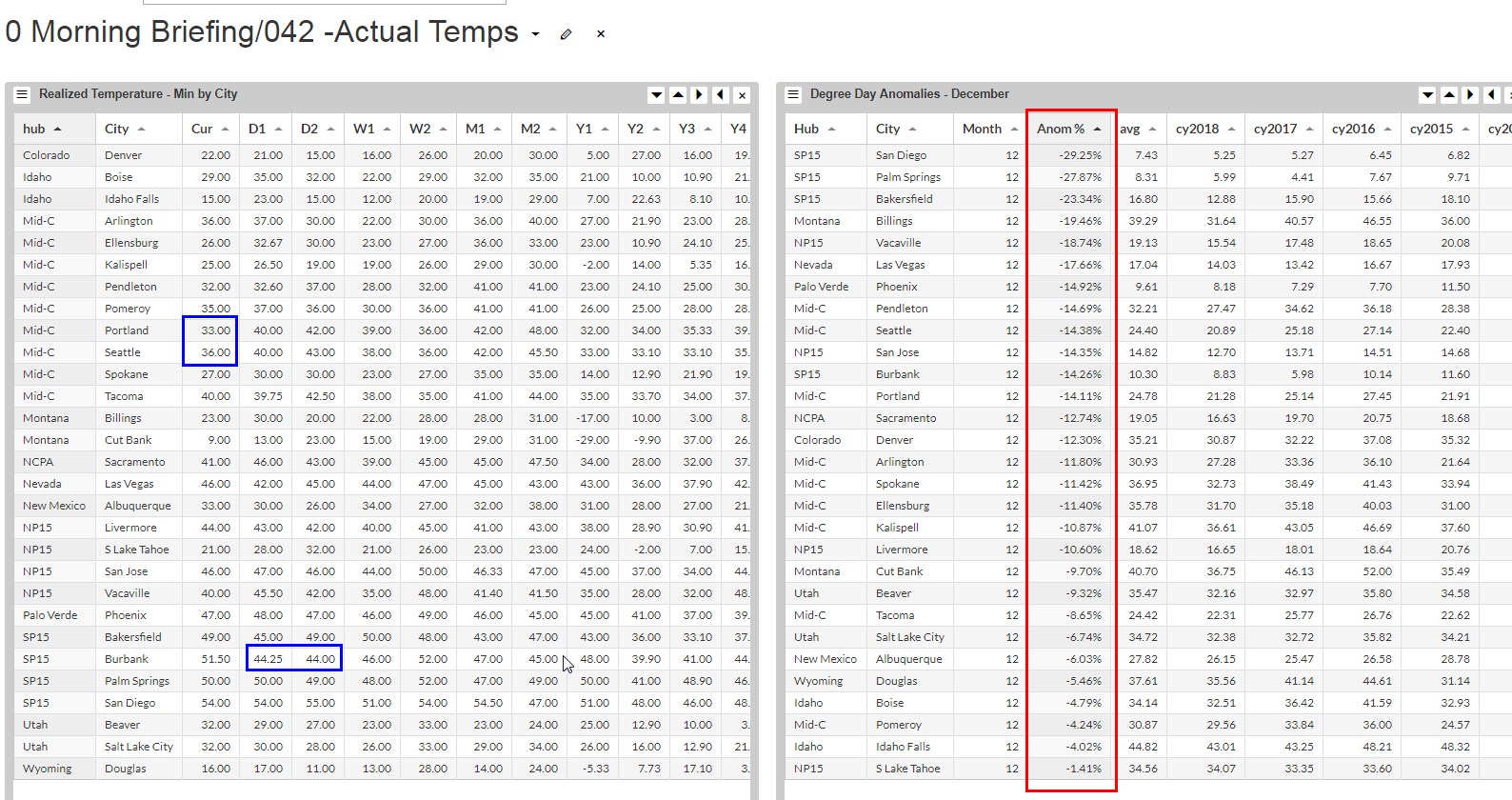 Every station in our WECC group is below normal, degree day-wise. Every station. So, the Northwest dodged a massive bullet by sheer luck and provident prudence. 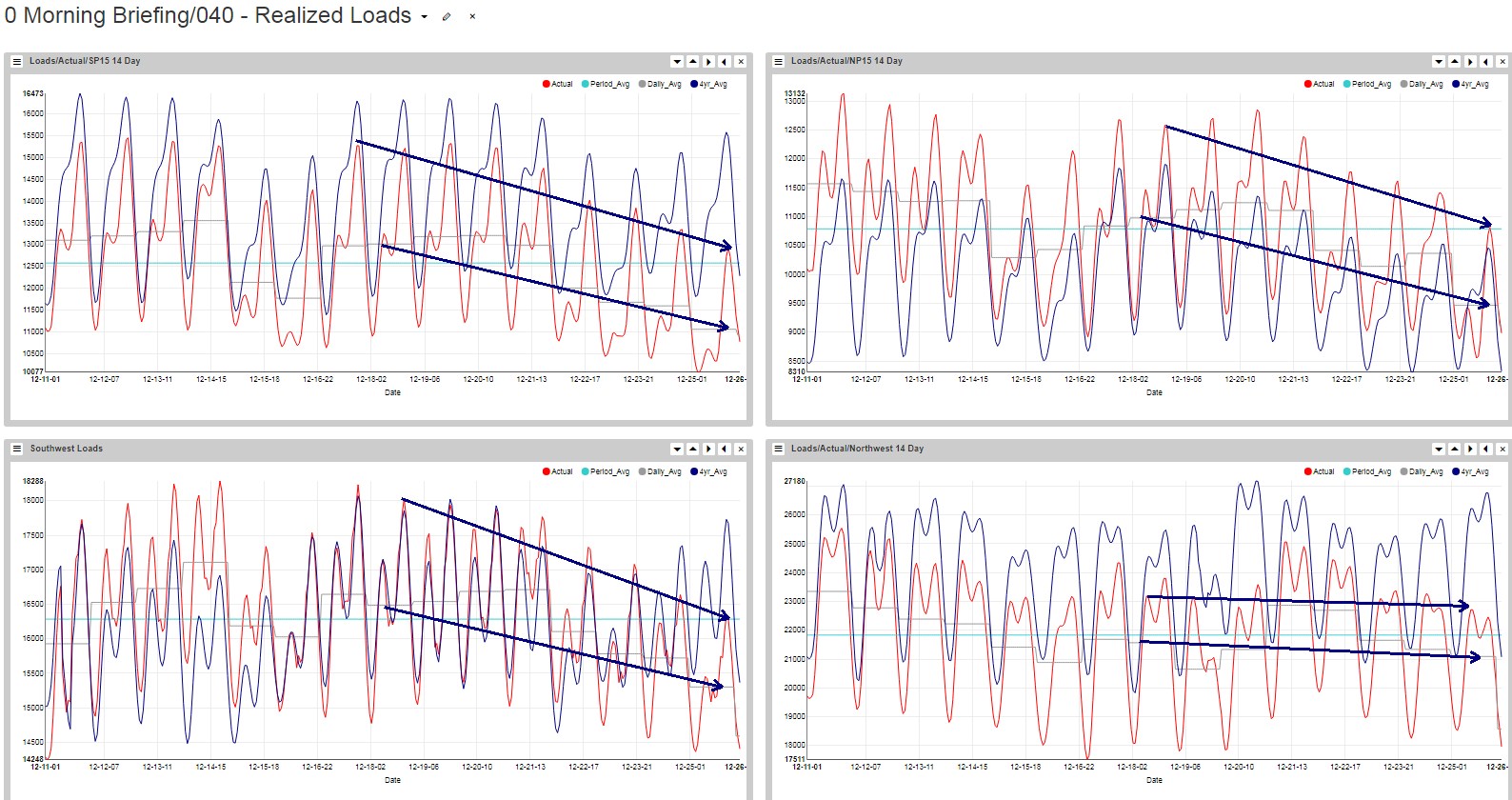 These power demand plots make you think everyone left the west, but the deltas are a biz day versus Christmas so somewhat meaningless, though interesting that the MidC’s demand was almost equal to last Tuesday. 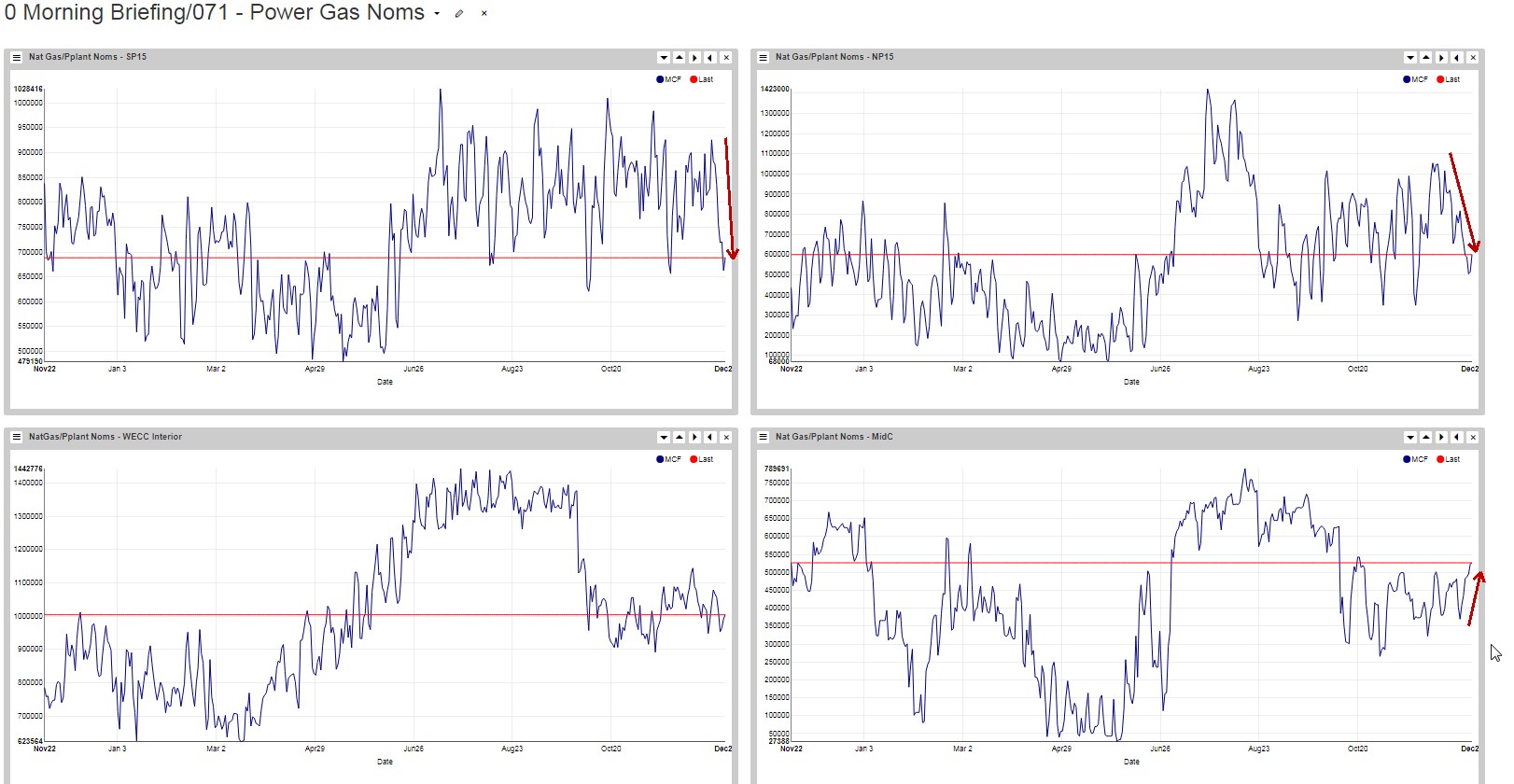 Power demand for gas is down in California and sideways everywhere else; reflective of the warm weather and holiday loads. These should rally as the 6-10 cold descends upon the coastal load centers.

Recall point #2 above – Sumas-based turbines curtailed. Well, that’s one for the history books, now all of them are running at full capacity, even though the power really isn’t needed. I guess its payback time, now the turbines will run while the reservoirs fill.

One surprise gift in Santa’s bag was a whole lot of wind energy; check out NP, it’s combined renewables nearly doubled on hour 14, SP was blustery and bearish, too; so was the MidC.

Coulee discharge approached a ten-year low for this  time of the year; not that inflows are that low, it’s because the water is refilling the reservoirs.

Well, let’s restate that- some of the inflows are not that low; the flows on the Columbia at the US border tanked over the last couple of days.

The feds published the STP on Monday which caught us by surprise; we weren’t sure if they were on shut-down furloughs, I guess not. Monday’s numbers were also a bit surprising, I think their 120 day forecast is too low. Recall, the MidC’s SWE anomaly is 92% and the precip is the same. So how does the NWRFC get to a record low 120 day forecast? I’d say their numbers are short 1-2 gigs of energy and will be revised upwards.

Meanwhile, they are revising downward, at least in their 10-day forecasts. I don’t get this, either; the weather is growing colder. BPA is going to resume drafting to serve loads, so will BC Hydro. Maybe someone spiked the eggnog on Monday?

The AC has a small uprate and in a few weeks a material derate; no changes on the DC.

Energy flowed north, into Canada on the Northern Intertie. Flows into the ISO dropped across all major interties. Both of these changes reflect the overall bearishness of the recent cash markets.

I’m bullish ISO, especially SP, given the cold weather and continued Citygate issues. It is really hard to get bullish the MidC, though the dry weather will pull the anomalies back down, but they’ll also cut the amount of water drafted for flood control. More on market sentiment in a post to follow.