What’s a better Christmas present than a fresh STP update?

This week’s update is highlighted by a massive 1,895 aMW reduction in December (though it comes with only a week remaining).  The 1,895 aMW decrease places the month well below each of the previous four forecasts.

January through March also saw cuts to their forecast, but all came at comparatively muted levels as March’s 385 aMW reduction topped the scale among the three forecasts.  April added back 998 aMW after last week’s 2,000 aMW cut.  Not to say we told you so, but Ansergy hinted that last week’s heavy cut seemed premature.

December fell off the charts immediately as the 25th showed up with a 2,700 aMW reduction, and the difference peaked again on the 31st at 2,200 aMW.  January through February held a 100-200 aMW difference through the entirety of each month, while the beginning of March introduced progressively larger differences, eventually leading to a 550 aMW difference by the 31st.  April brought immediate gains, peaking at 1,200 aMW by the 3rd, and maintained smaller differences through the forecast. 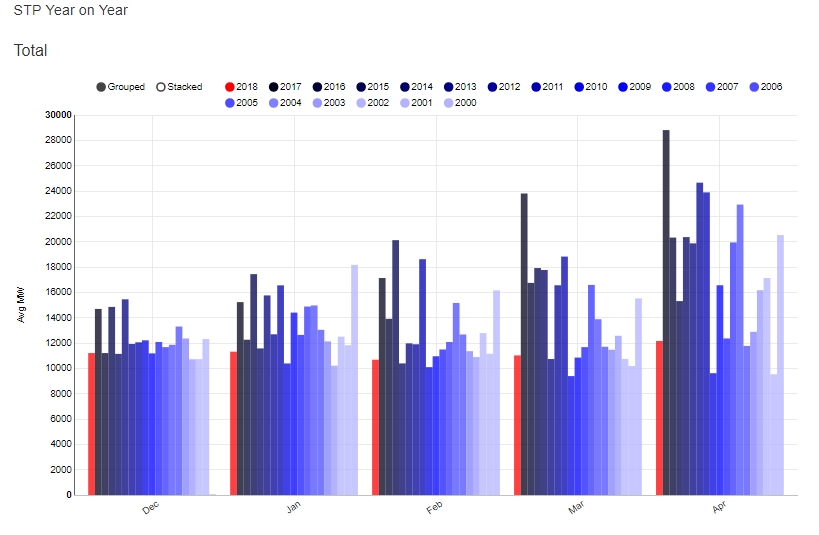 Cuts to December’s forecast has left the month mostly average compared to the rest of this century.  January through March, on the other hand, continue to pace behind their peers, while April shows the largest difference between its forecast and some of the heavy outliers (particularly 2018).