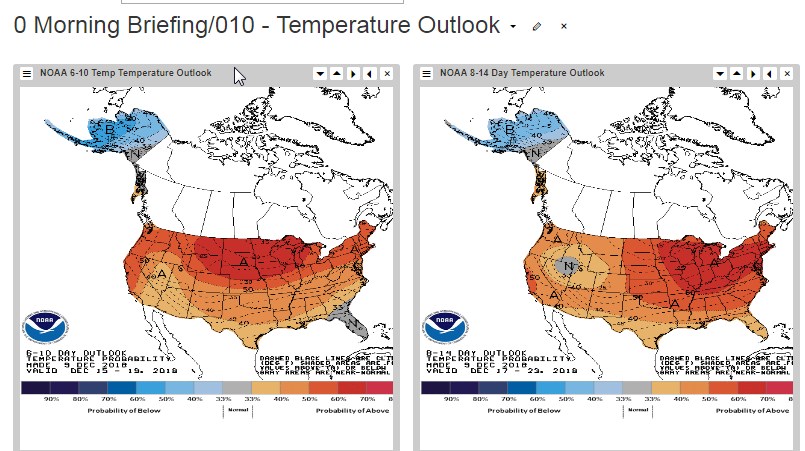 Hah! Not just the west is warm; the entire frigging country is blanketed in above average temperatures; all except for that den of LDS iniquity – Elko Nevada. Not only will WECC loads plummet, now the Nymex is going to collapse and give back that buck it so proudly added to its curve.

We did say warm and wet, right? 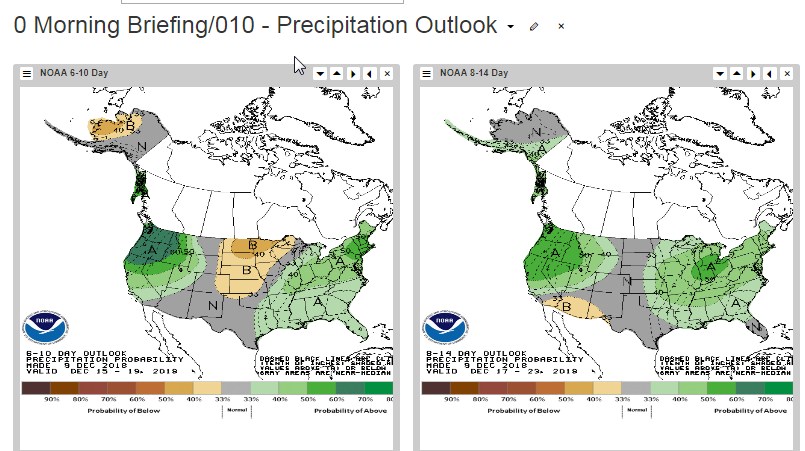 OMG, and look who’s wearing the bullseye – the MidC and it isn’t just the westside; the production basins are all at ground zero. NCEP shows it better, in my opinion. 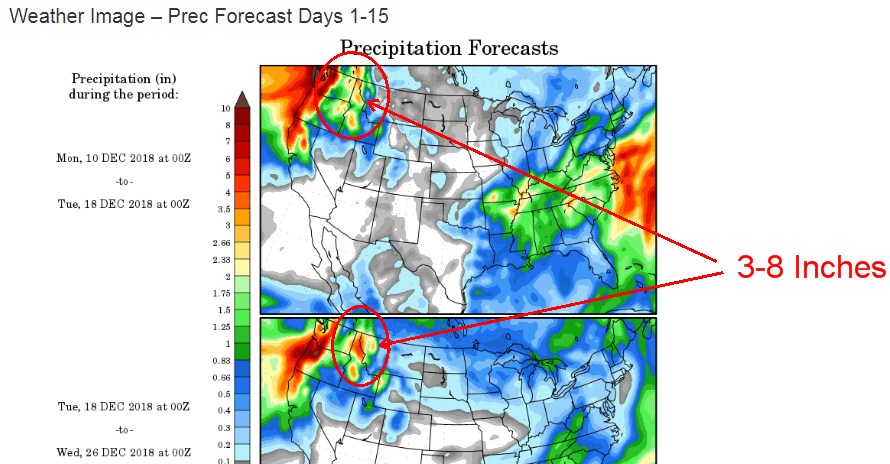 One solid bullish bullet, cuts at Hungtingdon on Westcoast:

OK, but we’re a glass-half-empty shop, and we’ll turn even that bullish nugget to a bear indicator. Think, why are these cuts showing up now? Easy, the rallies were in response to demand, to that moderately cold weather last week; that has passed and Westcoast is backing down its pressures (flows) to a “safer” range. Hah, they already proved the flows were quite safe at nearly fully pressurized, just how long do you think they’ll pass on those lost profits? Even if they idle at these levels, we now know that the next cold snap will see an additional 500 MMCF flowing into Vancouver and 250 MMCF into Seattle. The “Fear Premium” has just taken a haircut; not even sure Sumas deserves any fear premium any longer.

LMPs have stumbled, all points are about half of what they were a week earlier. To emphasize that point, NP cleared over SP yesterday for today in both on and off-peak.

These spot charts are rendered less useful due to those spikes, let’s zoom in on the table.

Sumas is now $3.00 under Socal Citygate, but still over PG&E, and off by$4.00 from last week’s levels. All MidC gas hubs are still carrying premiums; interesting how supply issues at Sumas have seeped into GTNW’s hubs. Both pipe’s premiums are at risk; all depends on when Westcoast is given the regulatory nod to take the pipe to 100%. We now know they can safely do that, this was proven last week. One must conclude the argument to be made to the regulators will be that much easier now.

All winter Sumas strips have tanked; they ran up in sympathy with that “Siberian Express” which turned out to be more Saharan than Siberian.

Citygate pulled back some, too, but not near as much as Sumas. You see, the Canadians actually fix their broken pipes, the Californians yawn, talk, and fiddle away years on theirs without actually accomplishing anything. So Citygate is still the long’s wet dream come true and doubt that changes through summer 2019.

California demand is off about a half a BCF from last week. Storage is off nearly 3 BCF and where Socal carried a significant premium (15 BCF) over last year, now that buffer is just 5 BCF while PG&E storage lags 2018 by 27 BCF. This would be a more significant concern if it were cold, it’s not. Still, winter is early; it’s not even officially winter yet. 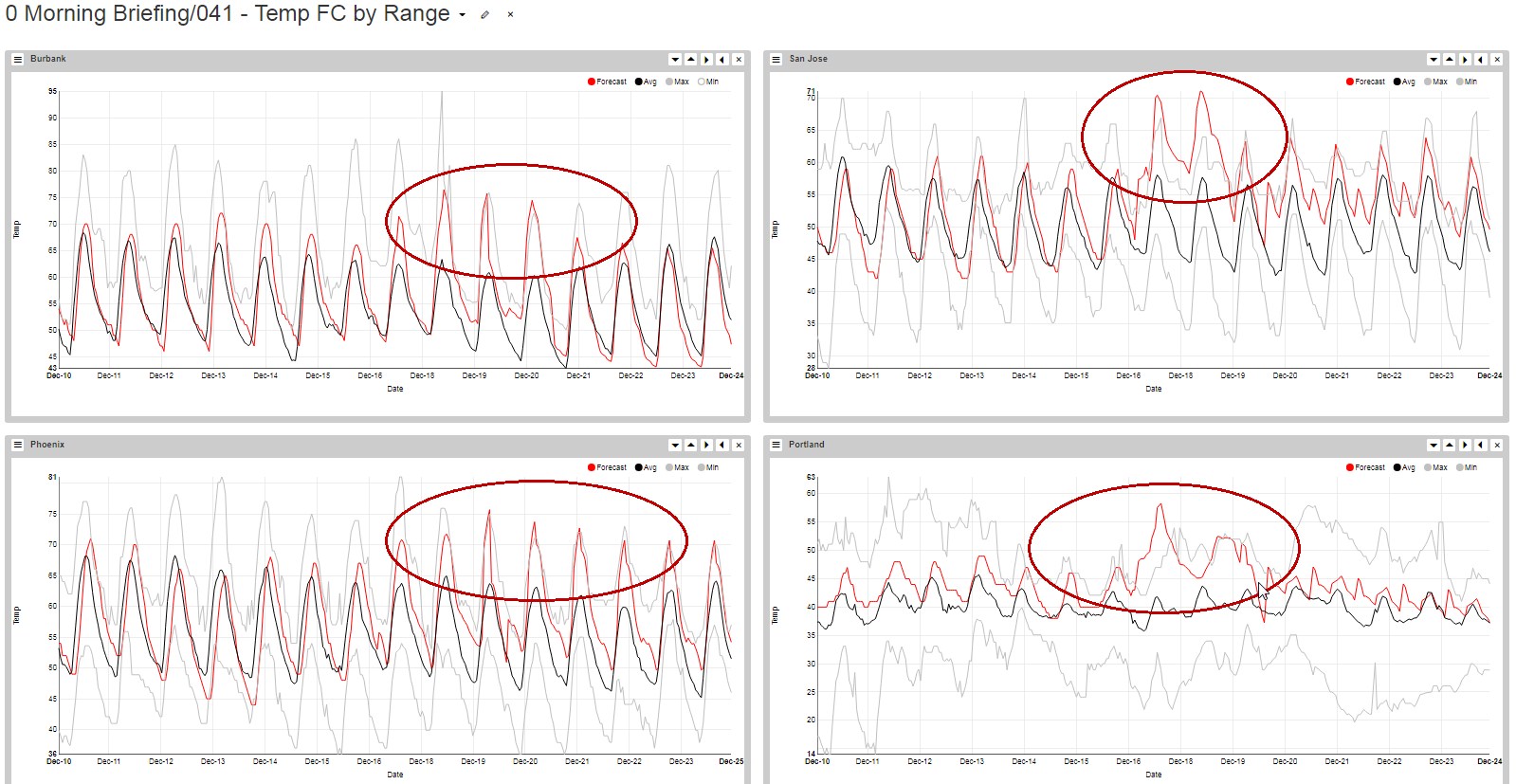 Mostly, temperatures are at or above average, though in the 7-10 day there are hints of record warm weather; Burbank actually might realize some AC load during that period. The Bay Area will bask in the low 70s, in Dec!. Where’re The Donald’s tweets mocking global warming now? 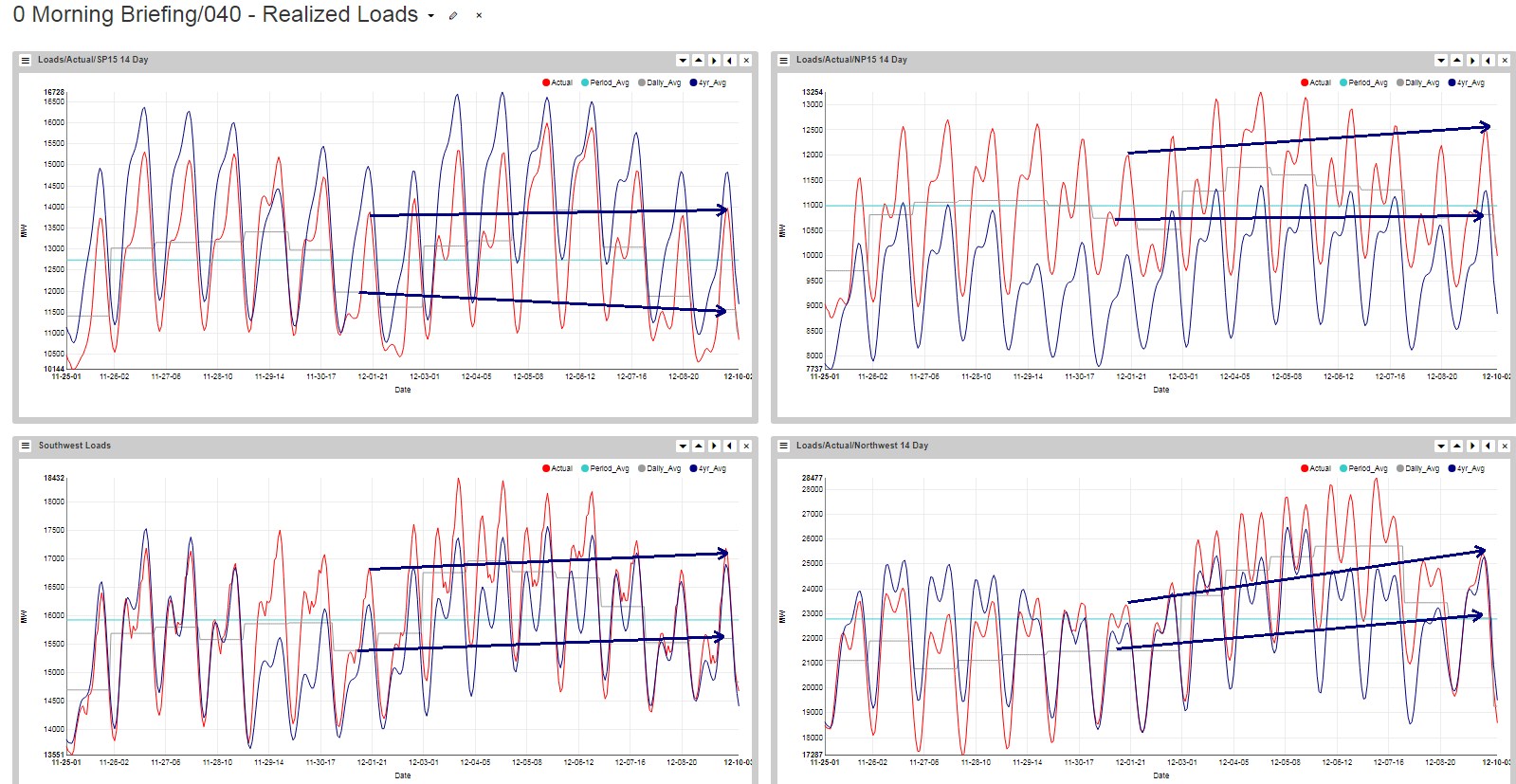 Mostly Sunday’s loads were higher than last week; we expect these demand plots to show a massive week on week decay by week’s end. 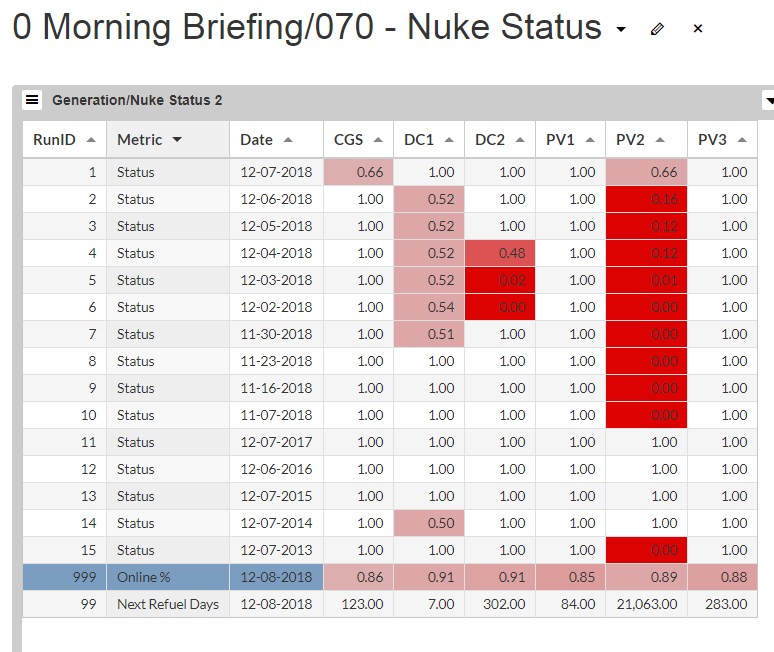 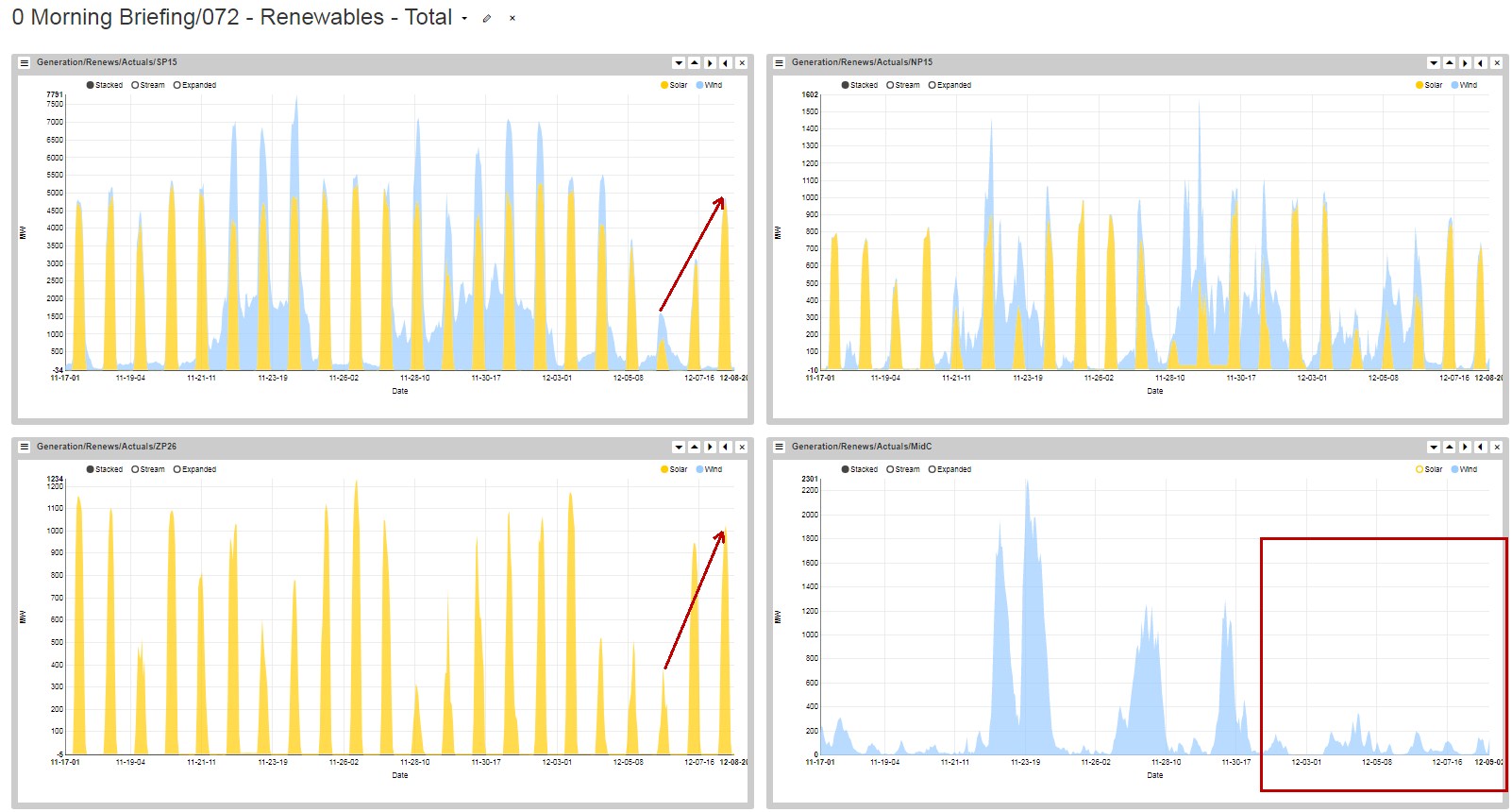 The WECC is becalmed, wind gen tanked, though solar rallied, yet total renewables are off.

Loads weren’t that high last week, and it wasn’t that cold; there were two years colder (2013 and 2009).  Though BPA ramped up its hydro production, those higher levels weren’t even close to what has been generated in past years. The most telling stats are the thermal and wind, both record lows. The former is Sumas related; the latter is random. One other great equalizer of last week was the Northern Intertie imports; BC saved the day. Not only are the Canadians taking all of our China heat by arresting our enemies, but they are also keeping our lights on.

Wind didn’t help Kally balance last week, but imports from NV and AZ did. Hydro is off from the last two years, though these storms might jump start winter production next week. 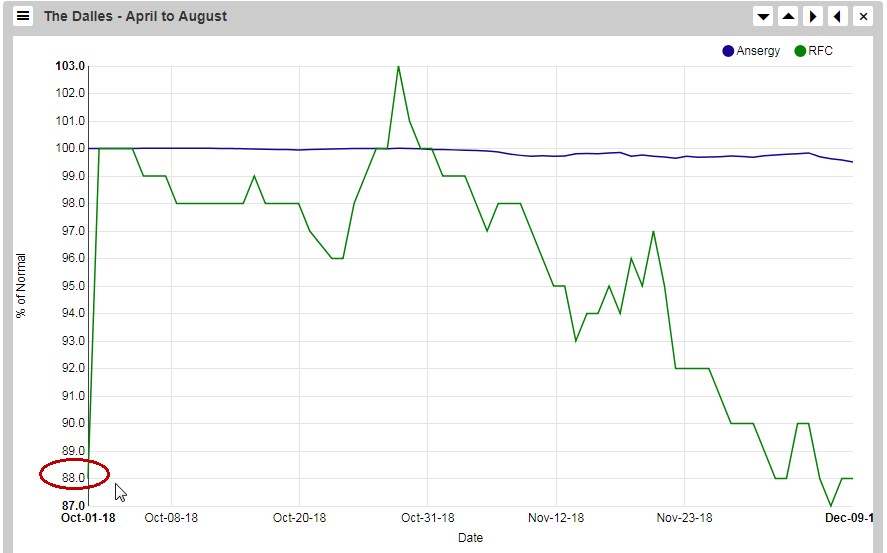 Hey, it’s time to play “Flood Control.” How deep will the Jan targeted draft be? The correct way to phrase that question when the water supply forecast is 88% is “How Low will it be?” Using our handy Flood Control tool, we can make an educated guess.

The Corps will use the April-August value as of around Jan 5th; if we use today’s (88%) we can predict the draft at all the projects. In the tables above, I’ve included the last twenty years draft requirements by the end of April as of the January release. The ranges are broad, the January number is less meaningful than the Feb and March, but it makes great blog fodder. The numbers: GCL to 1259; Arrow to 1414; and Libby to 2440.  Click here to see all reservoirs. 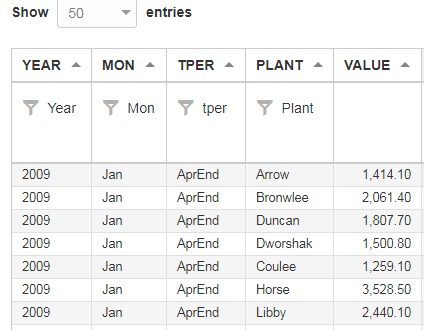 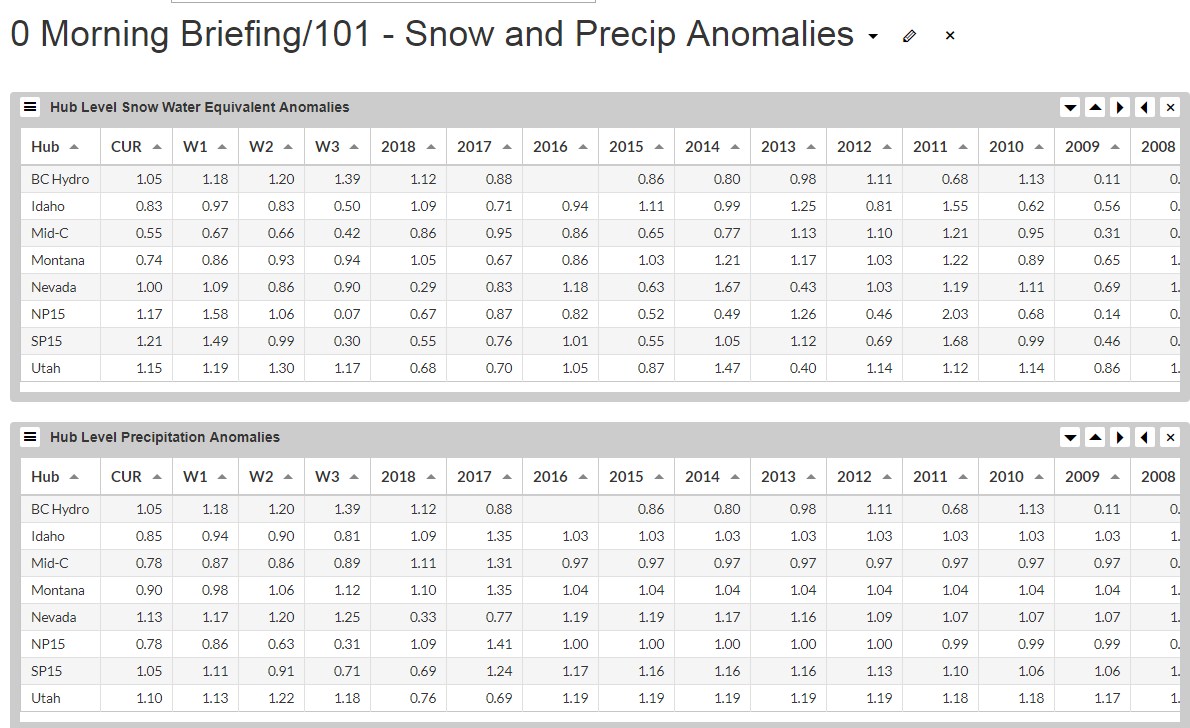 This report is fun; we’ve created hub-level precip and SWE anomalies for the WECC. Just how dry is the MidC? Well, the answer is

Ouch, you say; yawn we do. It is early in the water year; these anomalies don’t mean a lot. Here is our Day of Water Year weightings: 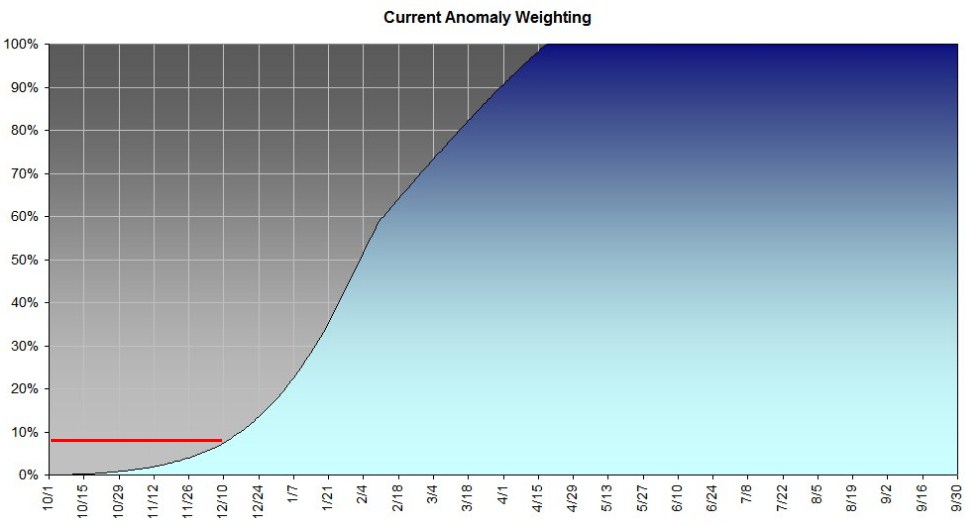 These are based upon the last thirty years daily accumulations of SWE; as you can easily see, the next 60 days make or break the water year. It looks like they’ll start with a bang. 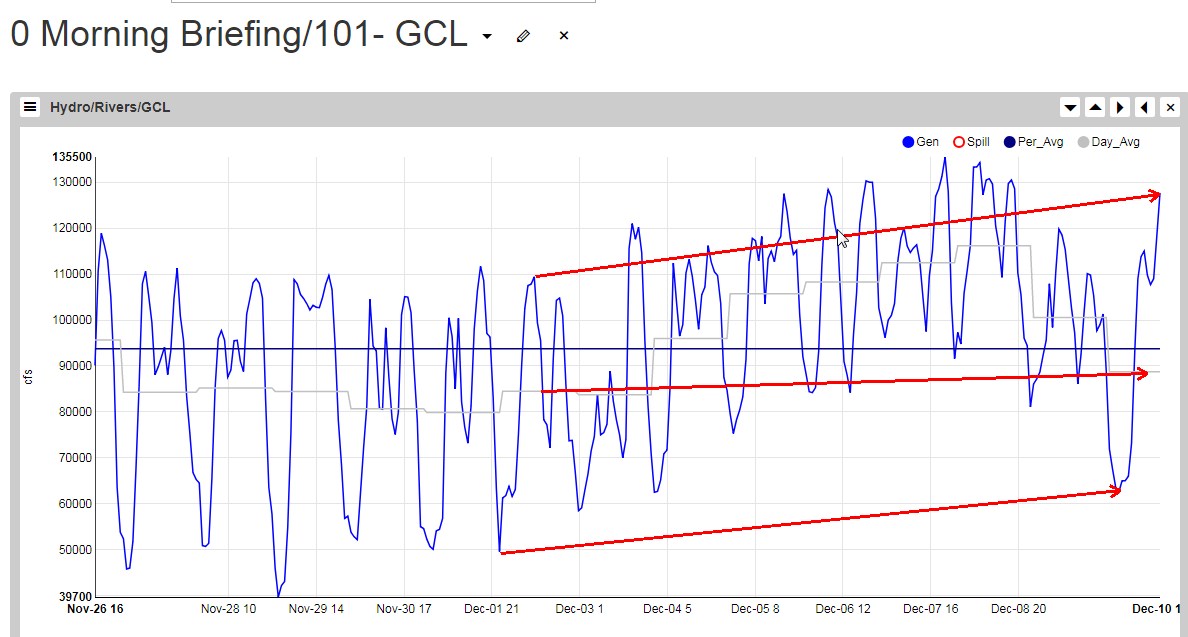 Coulee discharge is up week on week, but we suggest you focus on the levels from last week. Those were higher (daily averages), and that water is still working its way through the system:

Check out the lag at BON; yesterday was its peak while GCL’s peaked on Thursday. All of the gauges above Coulee are on the upswing:

Most of those new flows are from regulation – aka draft. But, if the Clark Fork basin bags eight inches over the next two weeks, you should expect flows around the mid 20 kcfs, and more on the Pend Oreille. Easily, we could see the MidC add another 3000 aMW of natural river flow energy under the worst-case scenario.

Offsetting those new flows will be a dire need for BPA to recharge the reservoirs. In a month, BC and BPA have pulled 3 MAF to serve load and are a collective 3.3 behind last year’s levels. Much of this new water will end up in the reservoirs, but not all. 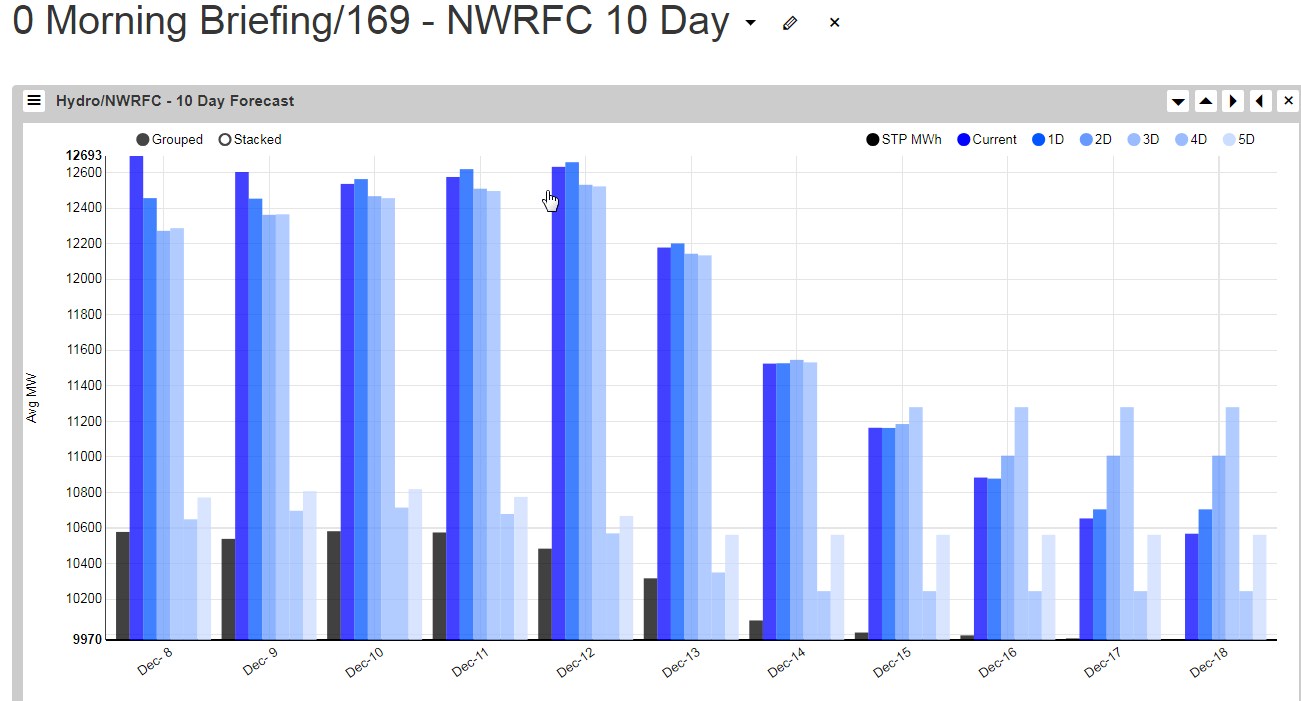 This is an astounding plot, but we’d suggest most of those bumps are the effect of drafting to serve last week’s loads; now everyone got long and this is just a visualization of the water making its way to the Pacific Ocean.

Some new cuts to south-bound transmission; we’d have suggested these were moot last week, but given falling loads and rallying water they only make the MidC ever more bearish.

BC is back to its buying ways, expect more of that. Palo blew past its TTC in haste to chase ISO prices; the hub is long and getting longer.