Today, I’ll walk through some Qs; not for any valid reason, just because we haven’t recently looked at the Qs. Given all of the recent front-end volatility, perhaps the back-end contains some nuggets to be mined by the diligent prospector. 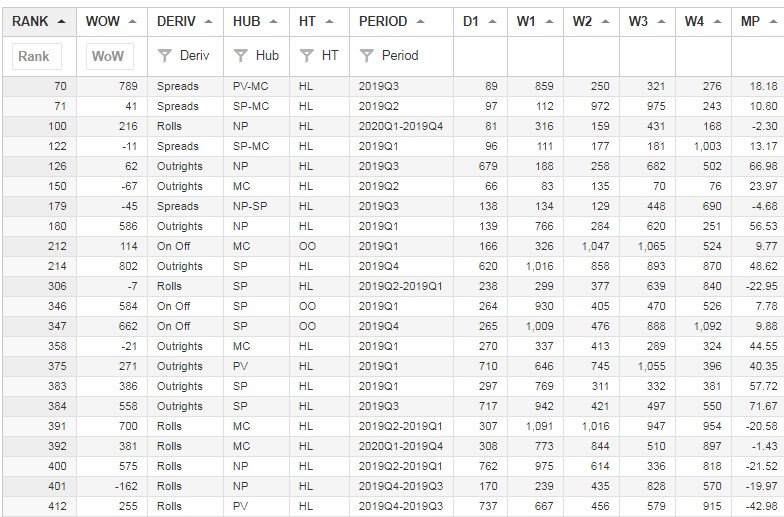 These are reported per the above order, sorted on Rank. 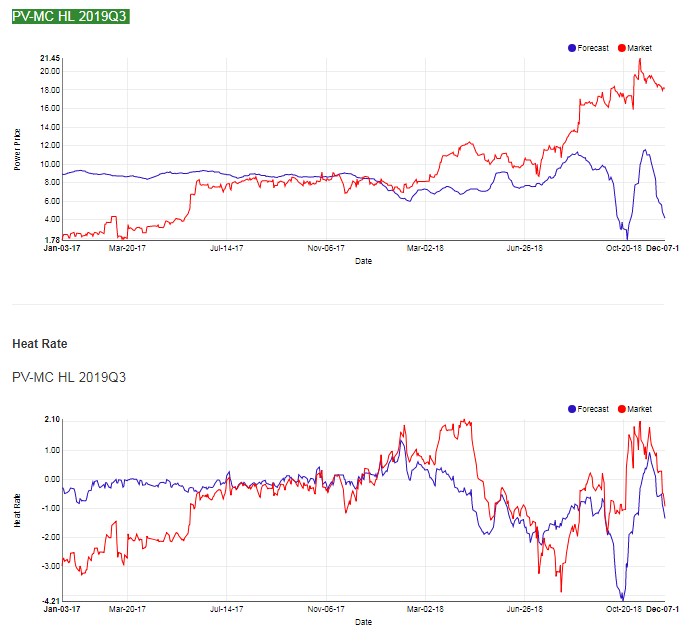 The forecast model has been very bearish on Palo of late, that’s reflected in the above Q3 spread. The market heat rate has collapsed, mostly off the MidC incorrectly rallying off a Sumas issue that will have long since been fixed by Q3. Fundamentally, MidC is technically bullish Q3 given the dry conditions, but the weather crystal ball suggests that is changing. With the nukes returning, the WECC growing weaker over the next few weeks, we’d be reluctant to get long rich spreads; if anything, we’d probably sell this, but there are better trades to follow, so we are PASSING. 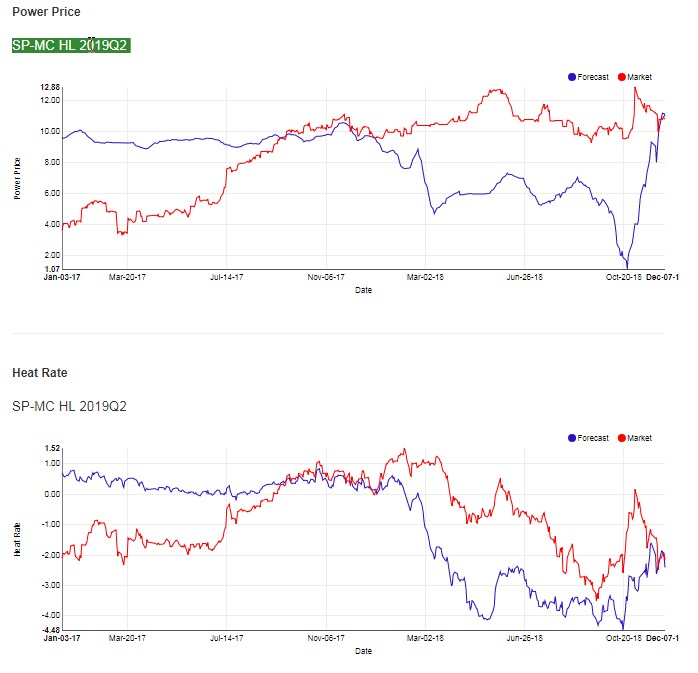 Alright, this is the spread between SP and MidC for Q2 and it’s really not priced that rich, we’d be buyers off of: 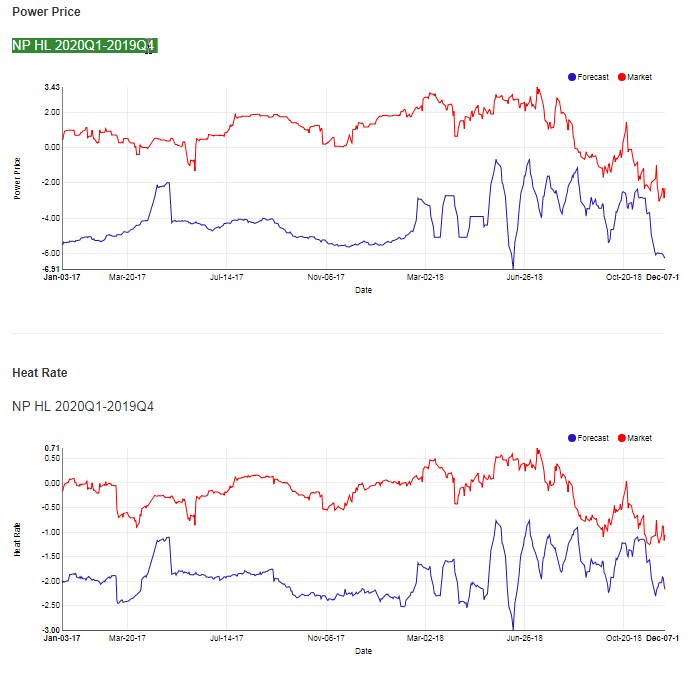 This is the roll at NP for Q1 vs Q4 and it’s cheap heat rate and price. Much of the cheapness was off of very high Q4 cash in 2018 and we haven’t seen anything of Q1 yet. Since this is a year out we’d be more inclined to fade extremes; cheap is the extreme as of today, therefore we are …. .BUYERS. 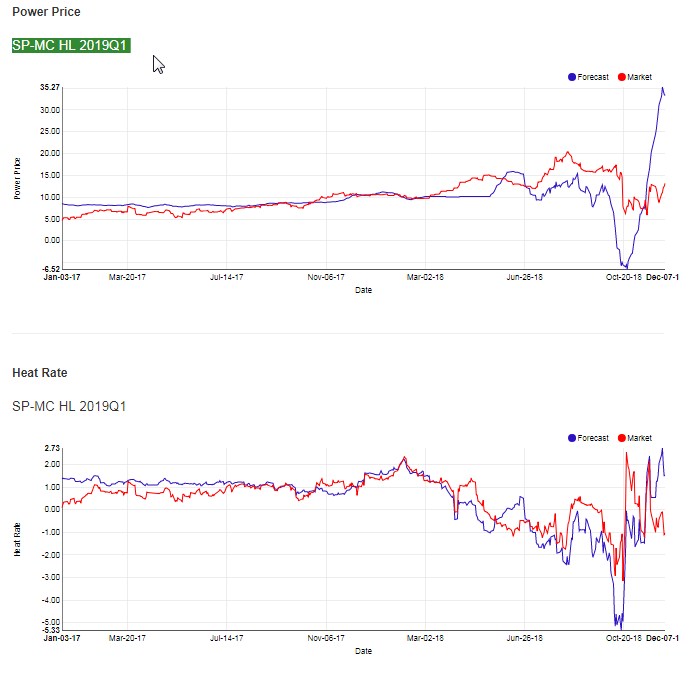 This is the prompt Q spread for SP-MC and it too is cheap for both HR and PP; the forecast looks stupid, but the model is what it is and we don’t disagree; this looks cheap and we are …. BUYERS 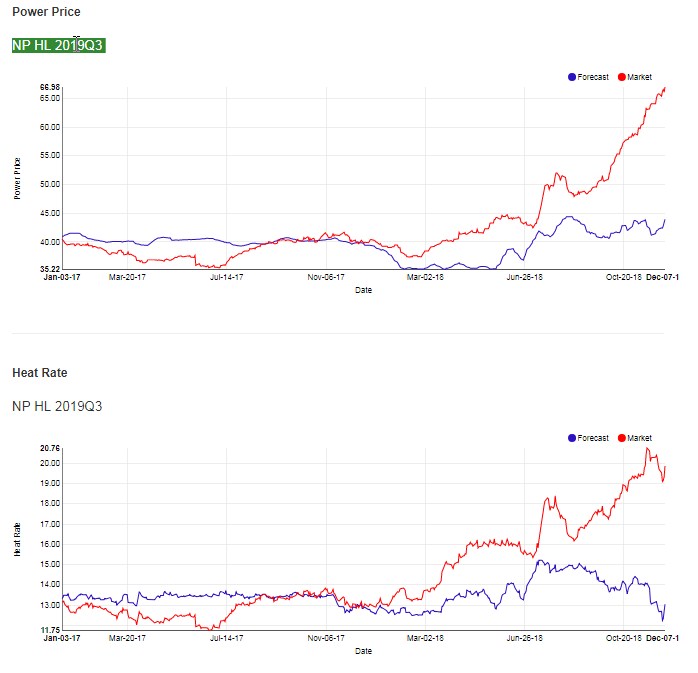 Oooh, summer NP. Nothing cheap here, priced high for both HR and PP, but HR came off a touch. Still, this is rich and there is plenty of time to get long the Q3; why not find a time when the ISO starts posting some negative hourlies? That said, we aren’t selling Q3 as we’d like to keep our Virtual Trader job (and keep you as a client).   PASS 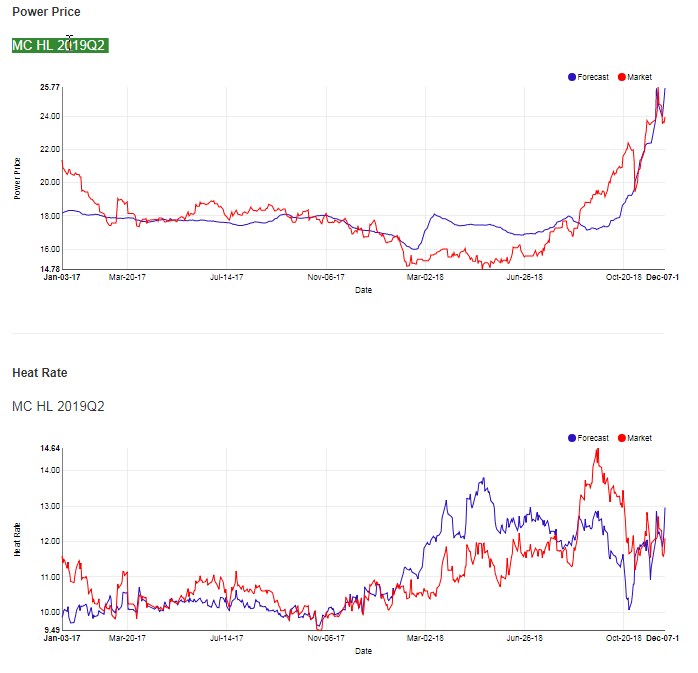 I like selling this because I don’t really like MidC. I live here, should like it, but don’t like owning record highs, not in the face of big wet and a soon to be resolved Sumas problem. SHORT 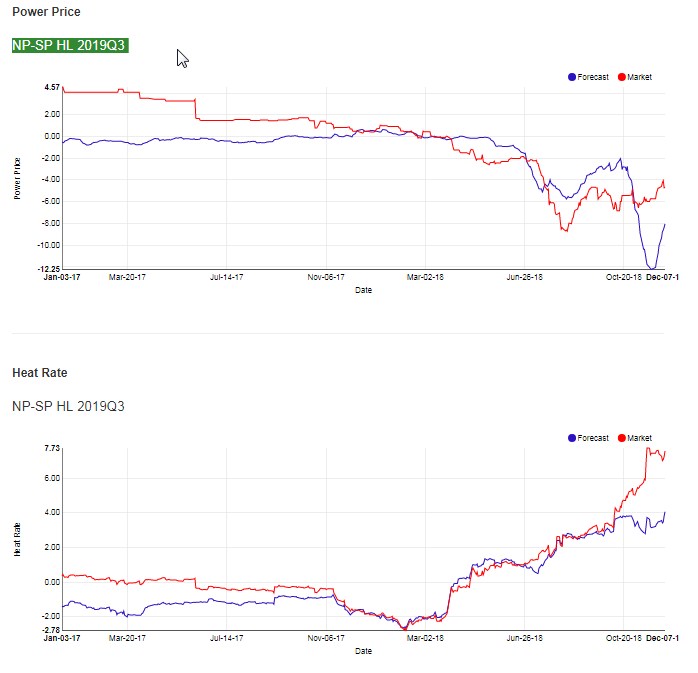 The summer spread between the two ISO hubs; on a heat rate basis it is pricey. Only because the market correctly assumes Citygate is a trainwreck again and steals all of ZPs gas gen leaving NP scrambling to serve its own loads. If this is priced off of last year it may be cheap; recall that NoCal was not hot last summer, SoCal was. If NoCal hot and SP is in its import mode, NP could be the sleeper Q3 hub. LONG 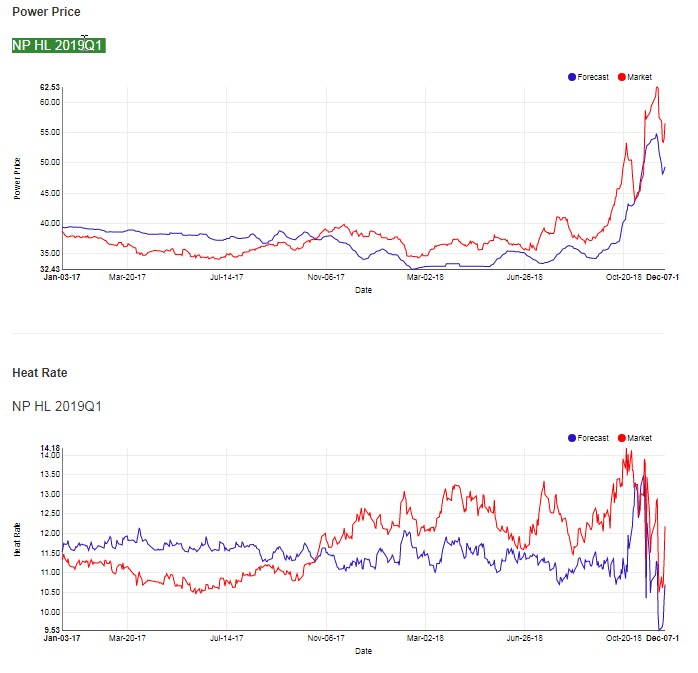 Prompt Q for NP and it’s rich PP and cheap HR. The trend is down, PP-wise, and we’d chase it down some more given the overall weak WECC outlook.  Modestly Bearish. 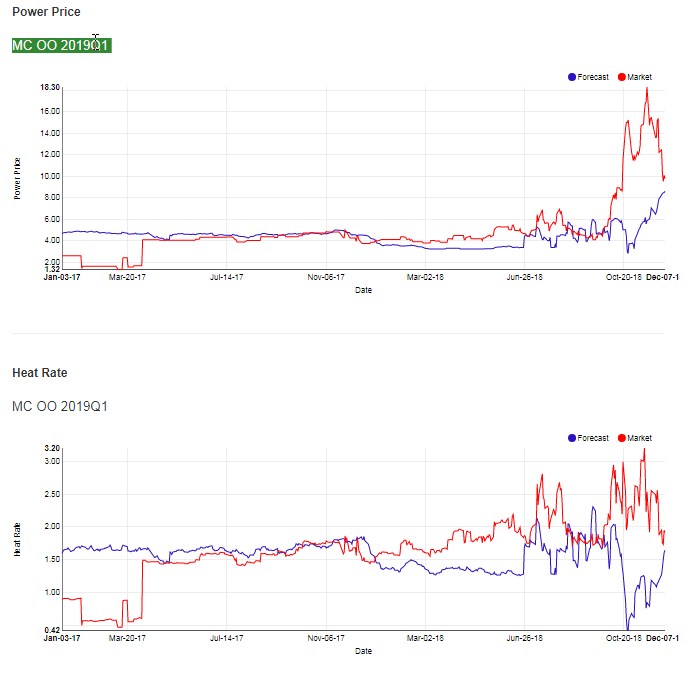 Get creative, try an On|Off. This one is Prompt Q at MidC and, though the market has tanked, we see more room to tumble given that it is winter. After all, evening loads are more stable than day time and BPA is going to store as much of this new-found water as it can. Take away that Sumas premium and this falls back to the 5-7 range rendering the lucky short a $5 win. Sell. 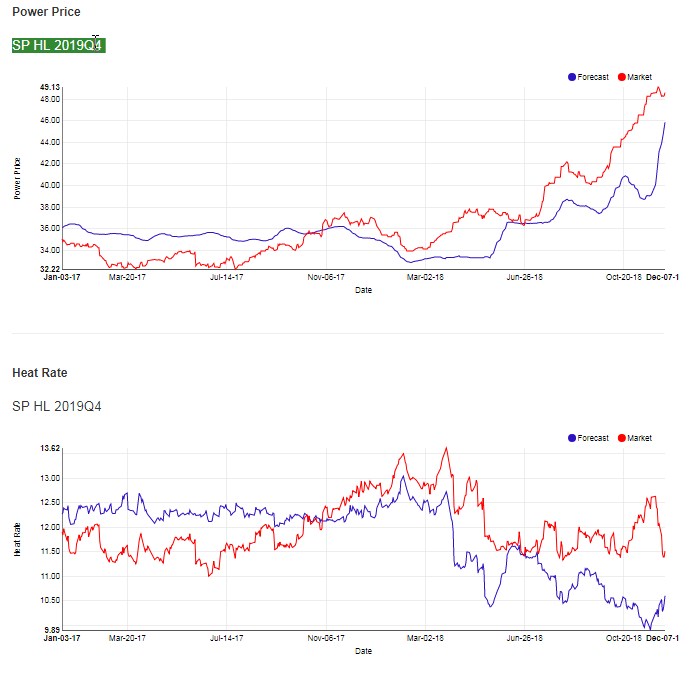 Out there a ways in the curve, the Q4 SP, and this is sky-high price-wise and fairly priced on the heat rate. If I sold anything naked short it would be the Q4, but not sure you need to short SP if you are selling MidC. PASS 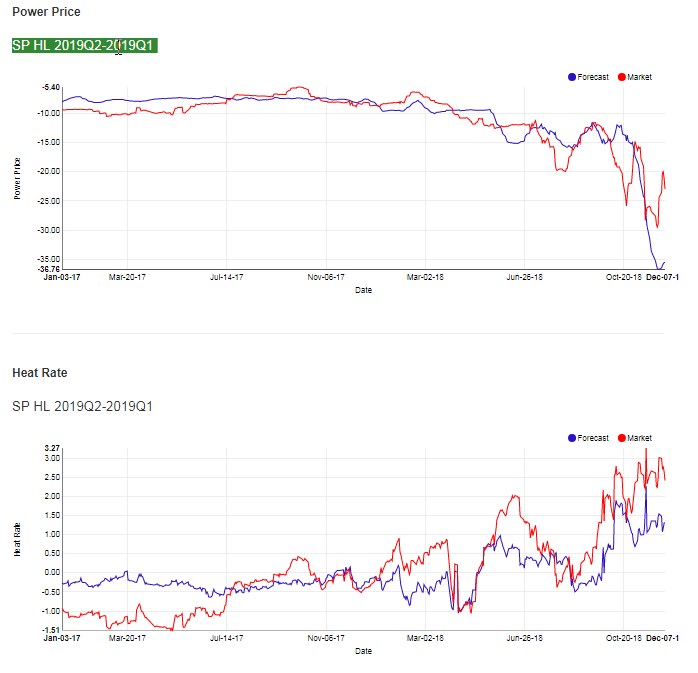 This is the Prompt Q Roll at SP and it is cheap PP and rich HR, but PP is rallying and if there is another cold day in LA the roll has another $10 to move up. Plus, you get a summer month in Q2 (June). BUY 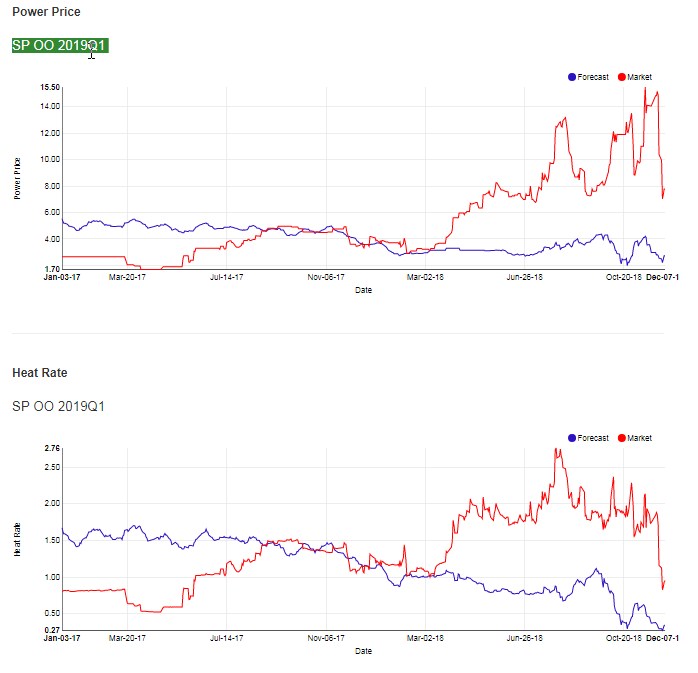 On|Off fodder, here at SP; the train left the station last week, your short opp is gone; we’d be more inclined to buy this as hedge against cold. LONG 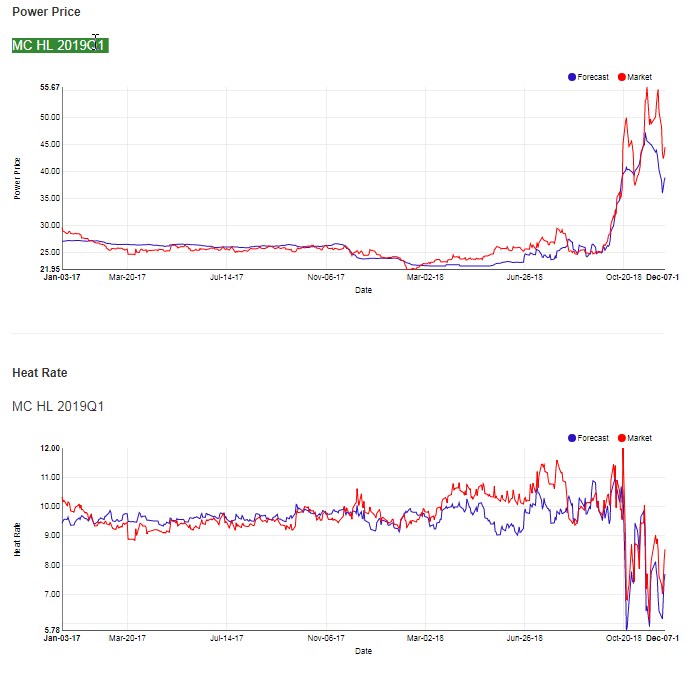 Prompt Q outright at MidC and the market is correcting, but it isn’t done. SHORT