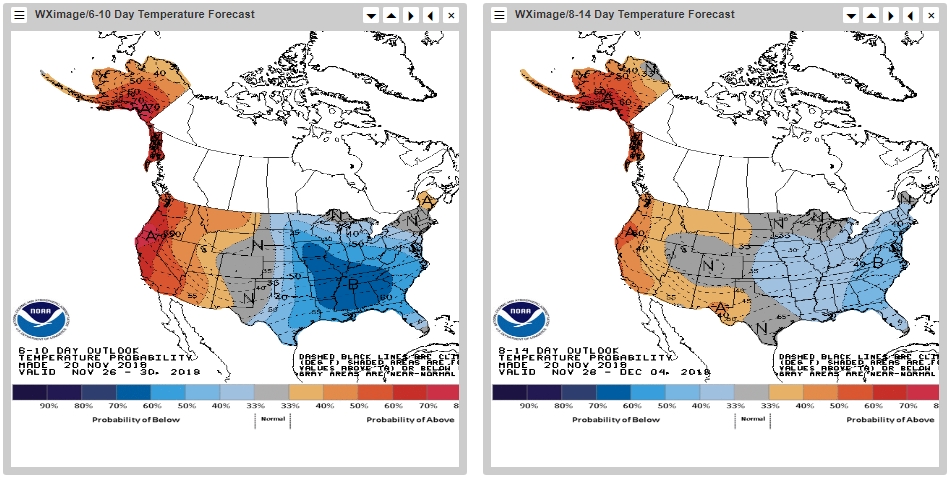 Warmer than normal temps are blanketing the west coast this week though that trend spill as far east as Utah and Montana as well.  The following week looks less abnormal as temps differ from average by just a few degrees in most areas with Northern California the lone exception. 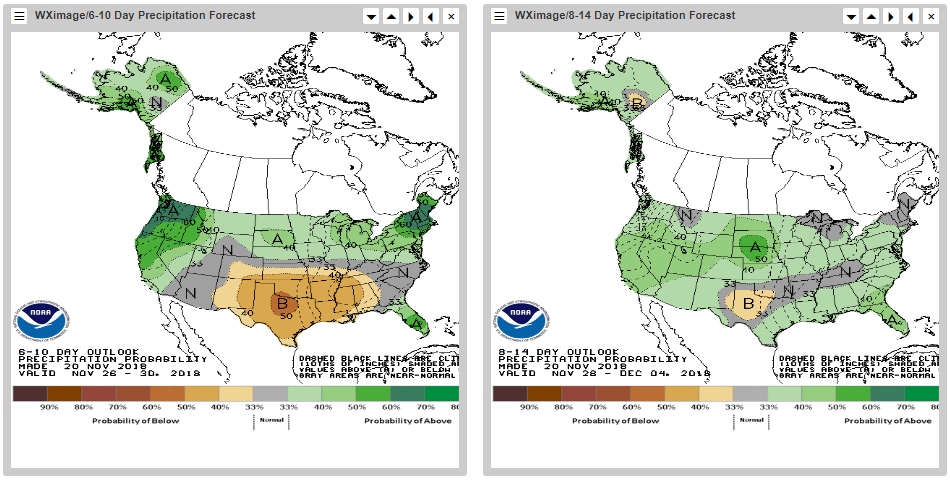 The West is looks wet this week, especially the Cascades.  Next week looks to bring more of the same across the entire WECC. 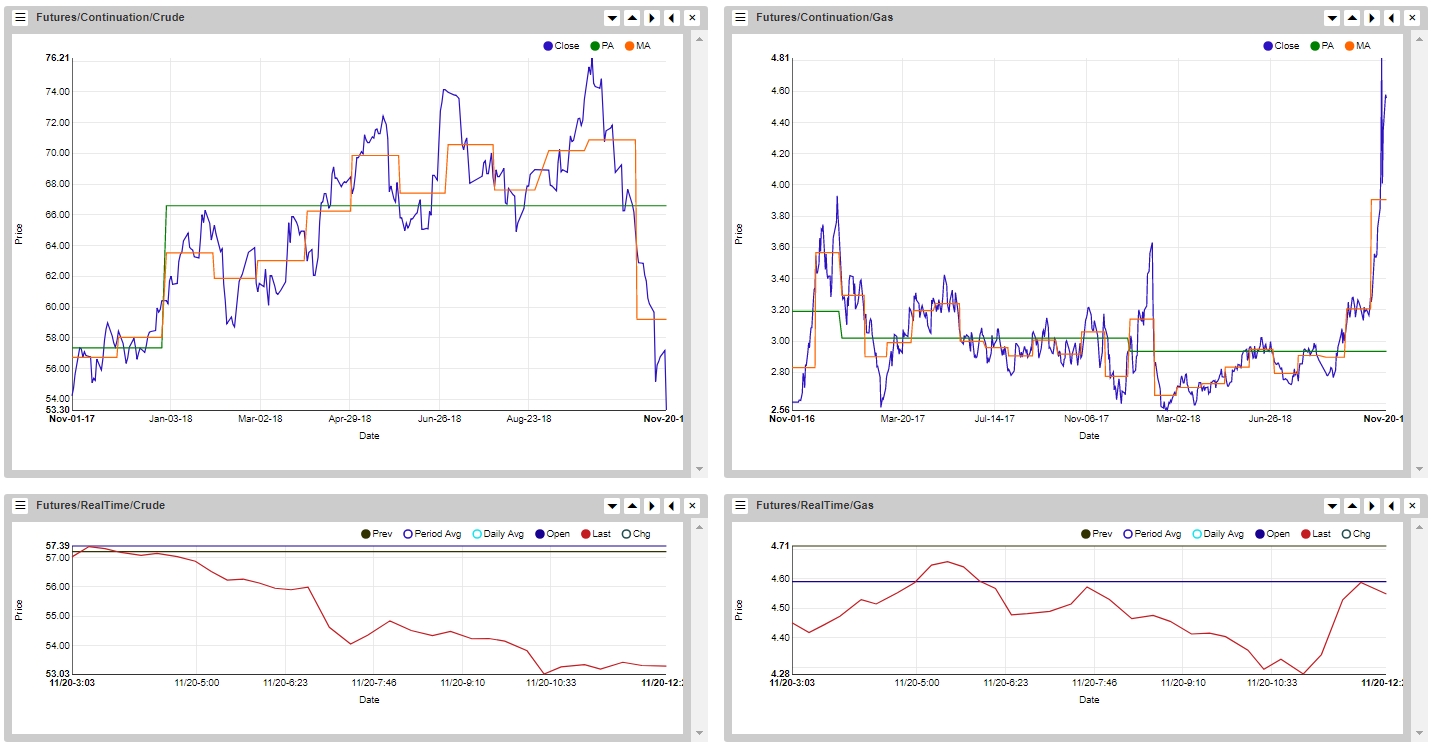 Crude is still tanking after having dropped to $53.30 in the futures after shaving off another $0.70 today.  Gas is back to $4.56 after dropping two cents day-on-day, though the day had plenty of volatility with prices ranging from $4.28 to $4.66. 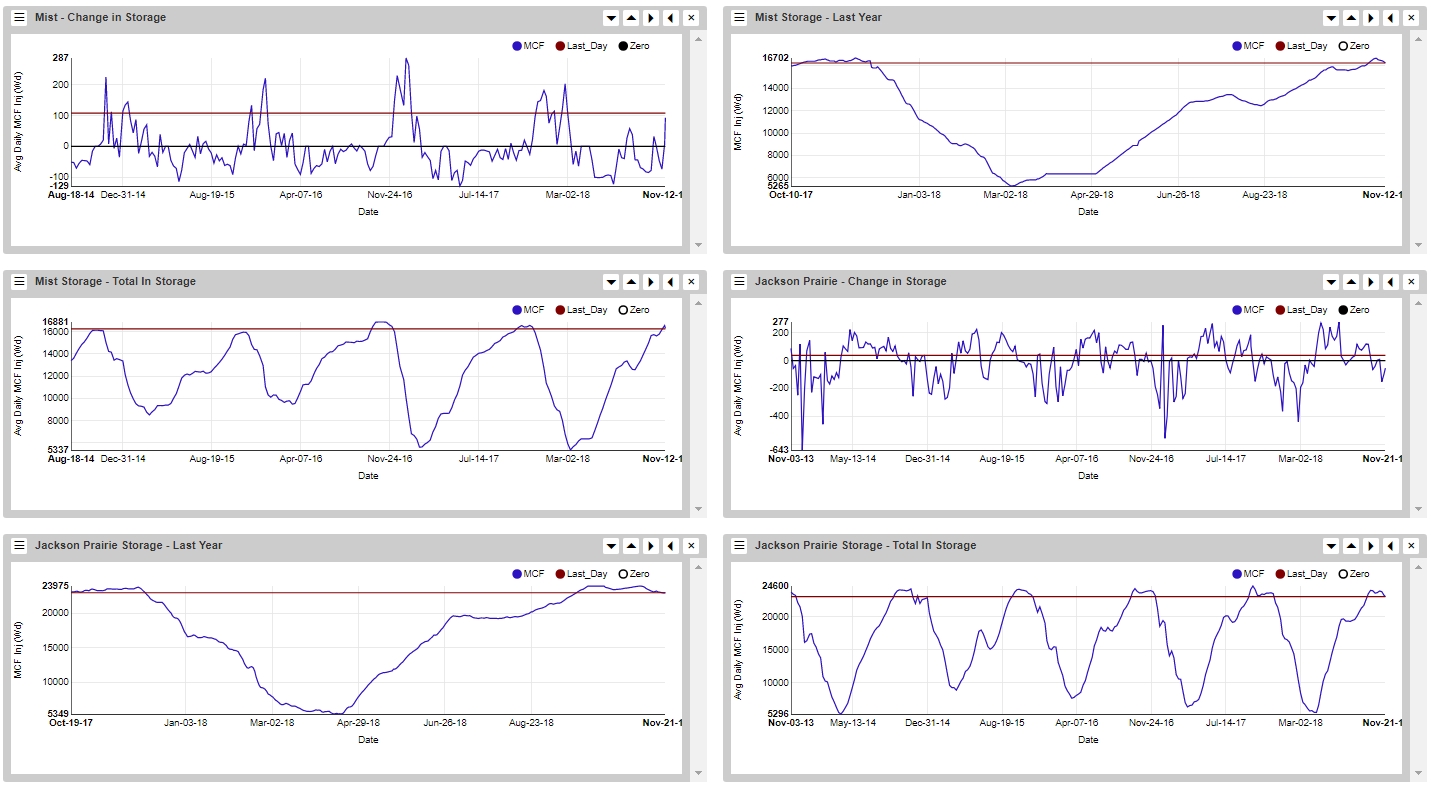 Jackson Prairie storage has been running negative since the 3rd with reserves taking their largest hit on the 10th at -152 MMCF. 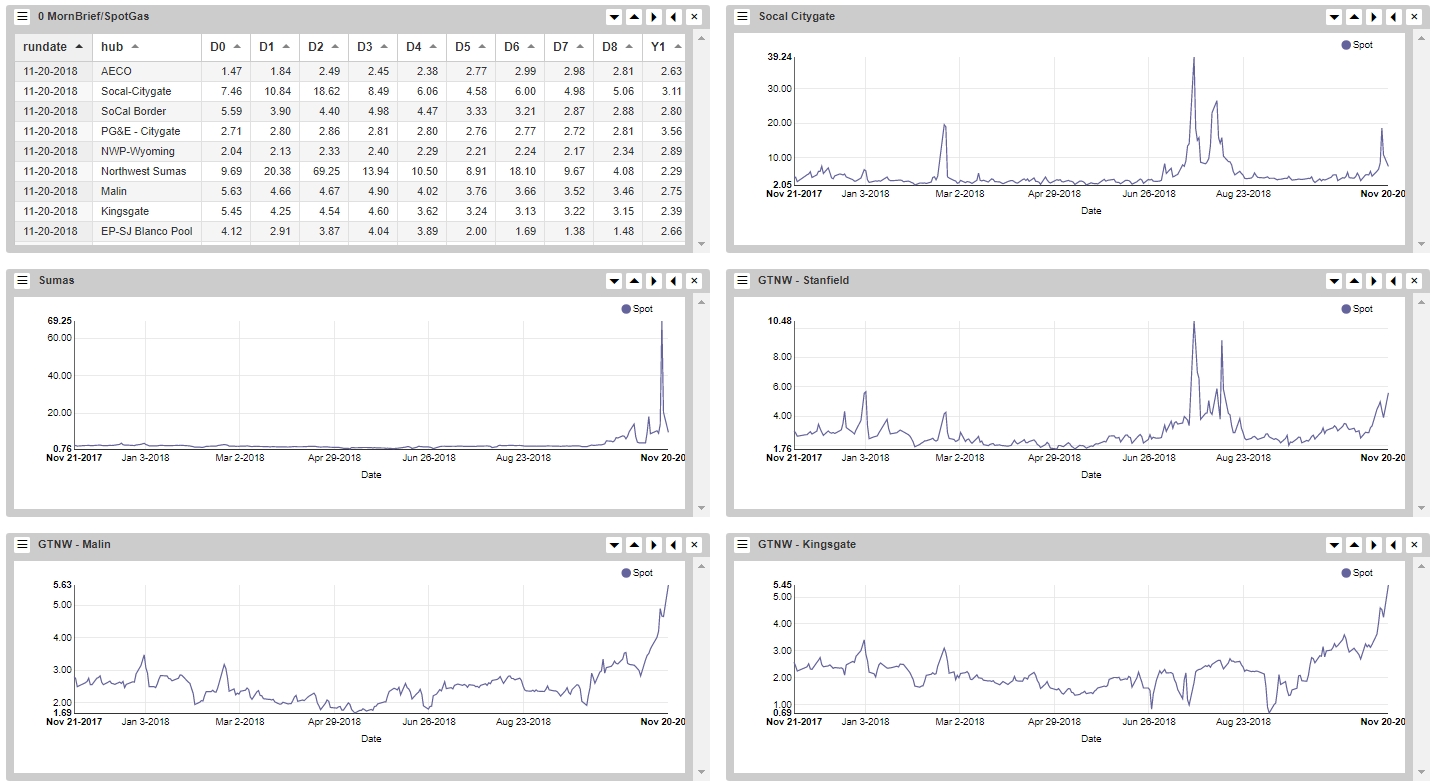 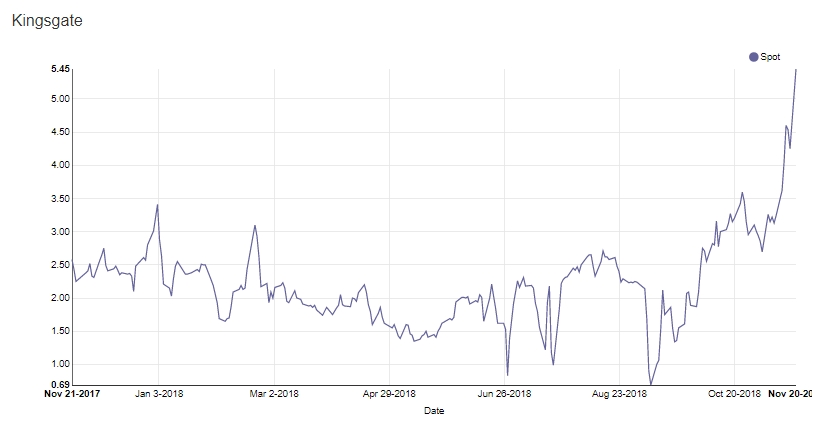 Kingsgate is following a similar path as Malin as prices reach $5.45, a 50% increase week-on-week. 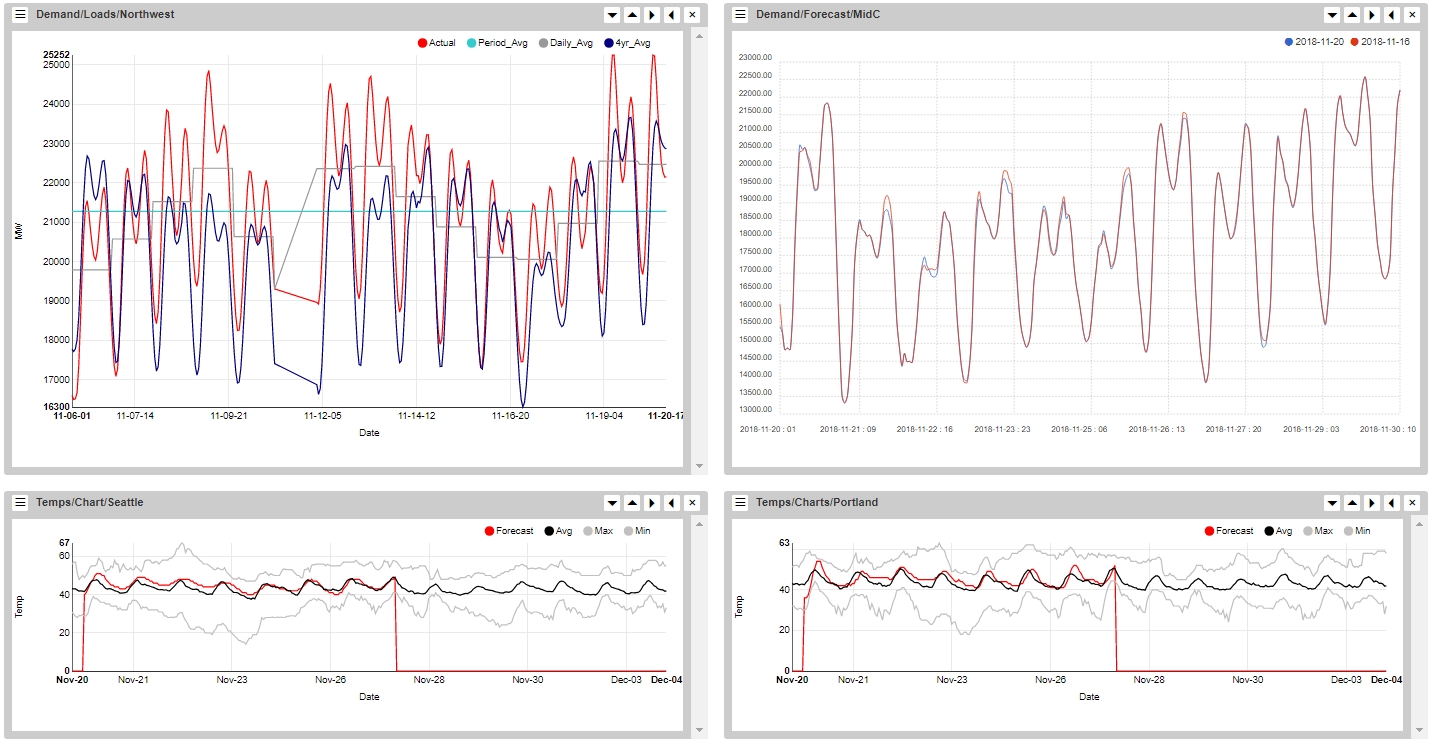 Seattle is hugging the average line through the next seven days with just a handful of highs rising as much as three degrees above normal.  Same story in Portland, though much if its variance is coming in the overnight hours where temps are staying comfortably in the 40’s.

Loads were nearly identical yesterday compared to Monday though daily low demand was up 300 MW.  Peak hours followed a similar schedule and topped out at over 25,000 MW. 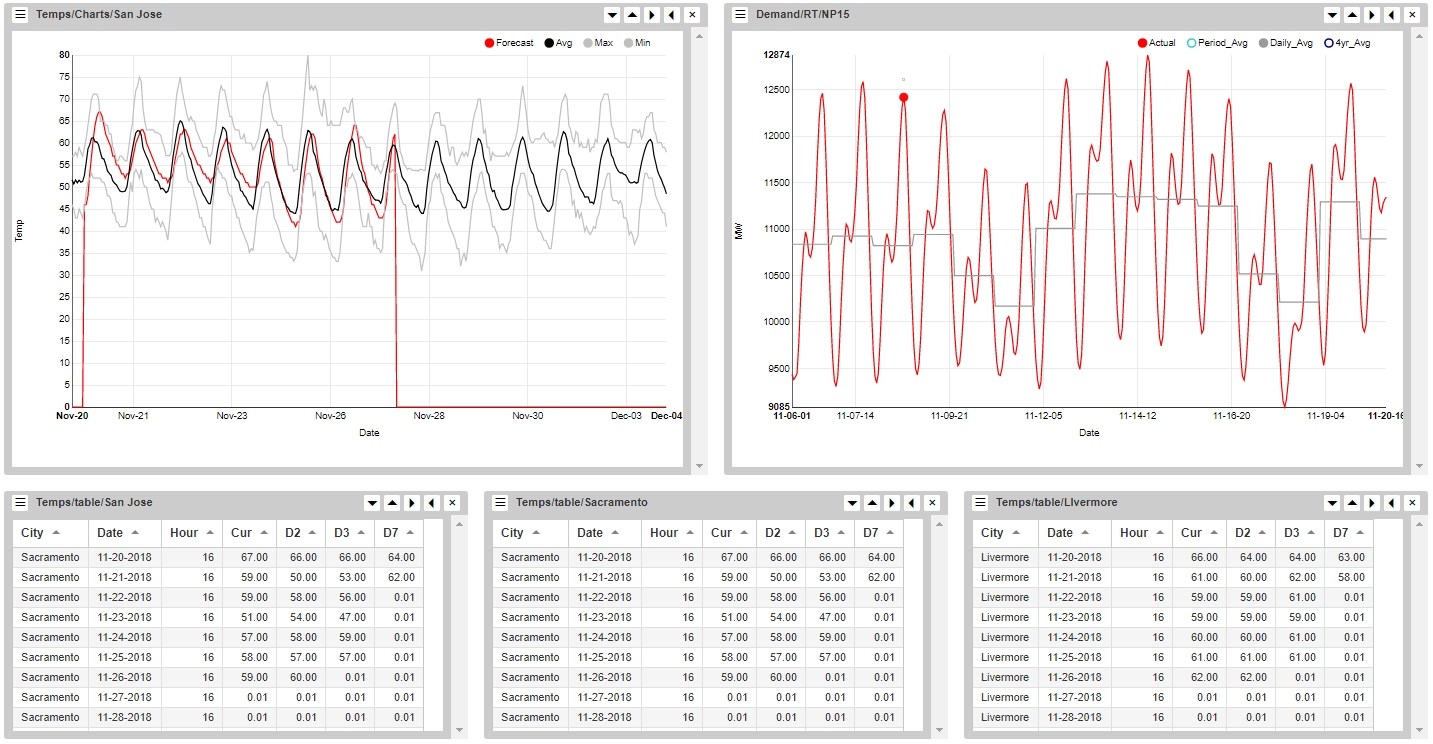 NP peak demand was down 300 MW yesterday compared to Monday and was down more than 600 MW compared to the previous week.  Off-peak loads managed a 400 MW increase day-on-day.

San Jose is projecting highs in the mid to low 60’s for the remainder of the forecast, a far cry from the 70+ high we saw yesterday.  Watch for temps dipping into the low 40’s by the weekend. 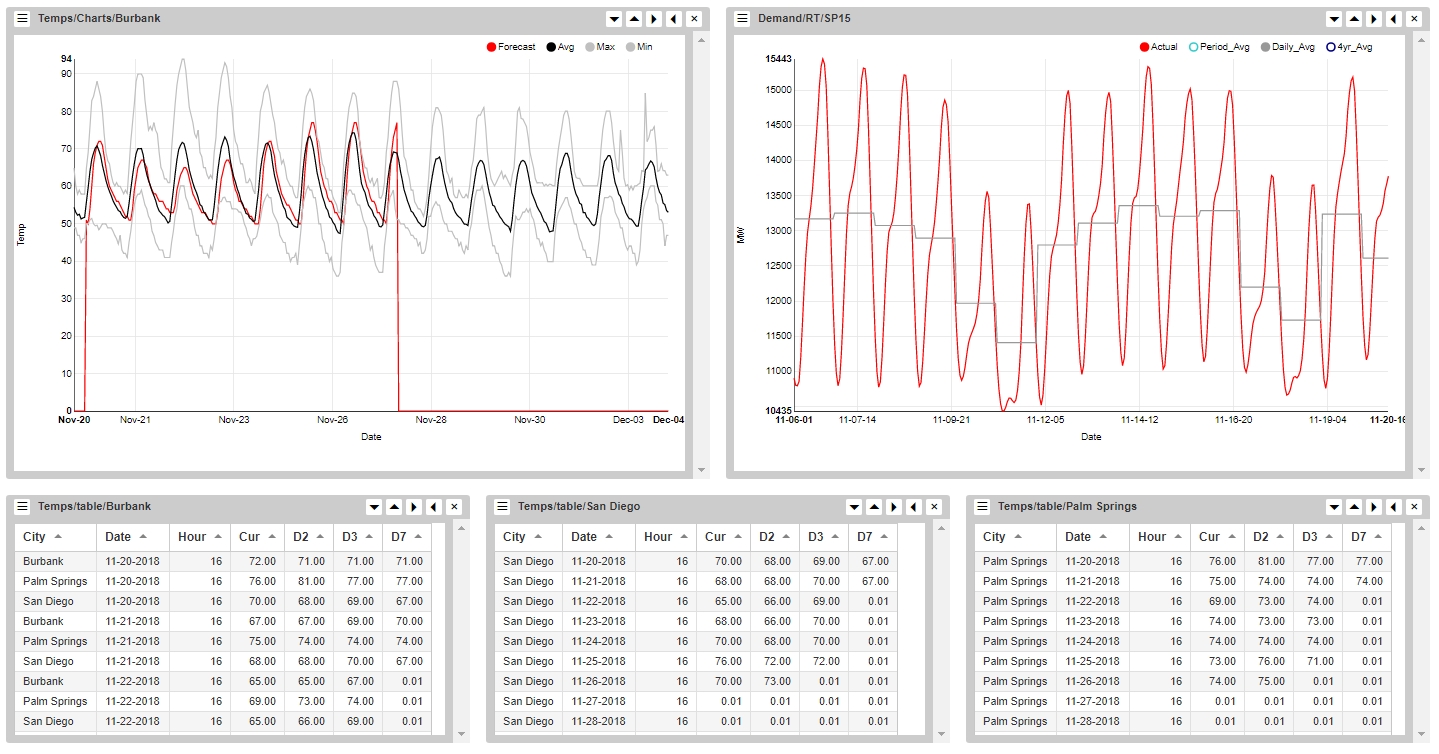 Burbank is looking perfectly mild moving into the weekend as temps top out in the mid-60’s.  Sunday shows a return of the 70’s with a high of 77 for each day Sun-Tue.

Phoenix is pacing six degrees below normal for its highs beginning tomorrow and extending well into next week.  Lows aren’t projecting that extreme but still dip four degrees from average in most cases. 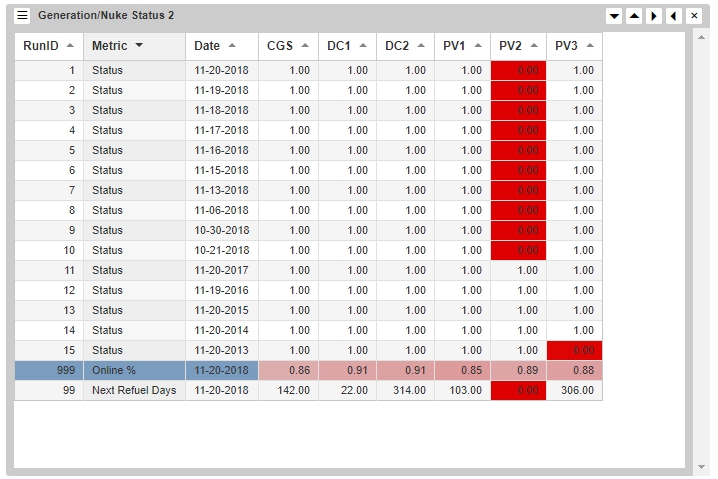 SP-15 solar has dropped 20% in generation over the past week as yesterday checked in at just 4,100 MW.  Each of the previous four days failed to top the 5,000 MW mark.

Mid-C wind is working with peanuts during most days of the past two weeks though the 14th and 16th each managed to top 1,000 MW.  The high of this week peaked at just 314 MW on the 17th while the following two days only managed two hours above 100 MW.

470 MW of gas outages were tacked onto the ISO total yesterday, reaching 4,733 MW.  Still well shy of the totals we saw in late October, however. 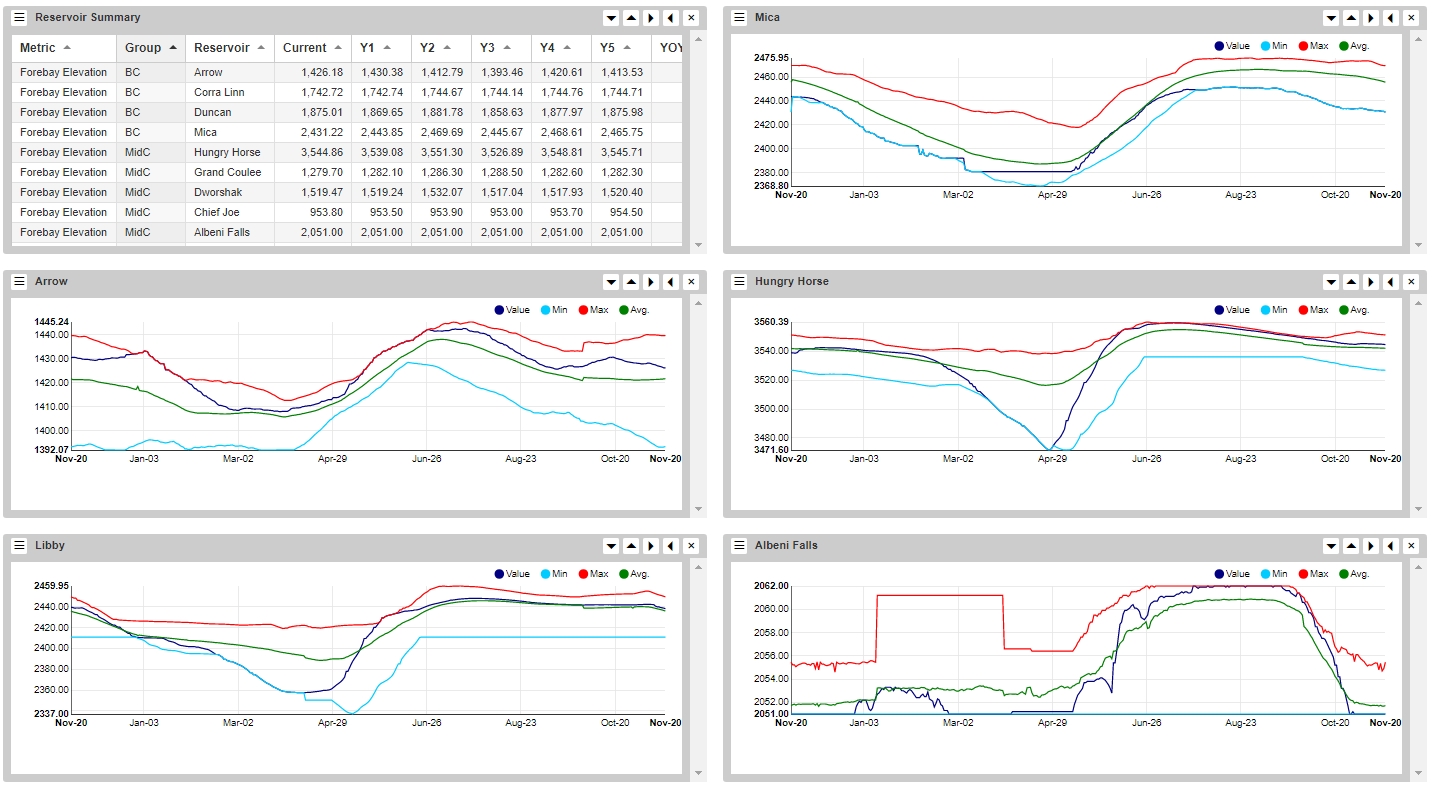 Mica is still setting new 10-year lows as it currently checks in at 2,430′.  Hungry Horse and Arrow are reporting elevations slightly above normal while Albeni Falls remains at a low 2,051′.

Here is another week-on-week look at how the snow pack is building, or in this case, isn’t building.  Aub-25% anomalies are creeping their way north through the Cascades due to a lack of early season storms coupled with mild weather.  The East side of the Rockies, especially in the north, are keeping pace so far this season. 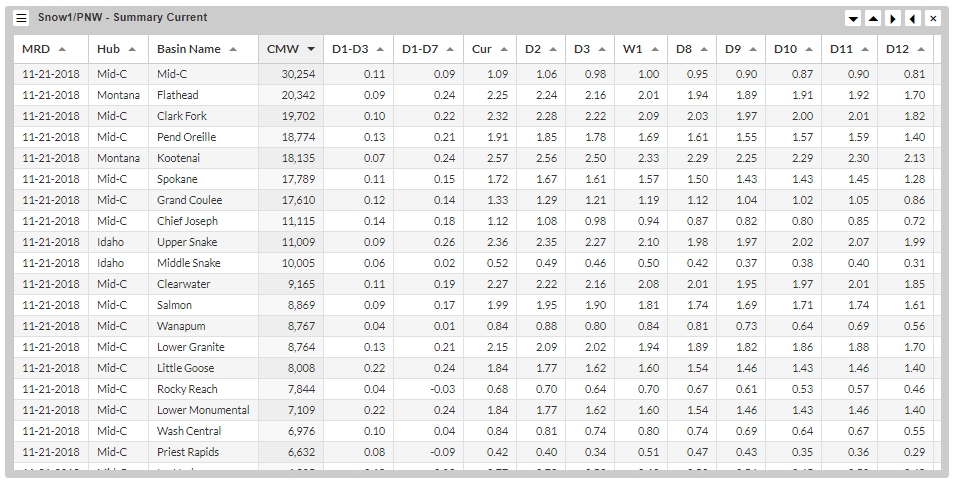 Rocky Beach and Priest Rapids are the only two basins to show a week-on-week decline in snow depth, though each amounted to less than a tenth of an inch.  Still, just a handful were able to add more than 0.2″ over the past two days.  Upper Snake led the way with a 0.26″ build. 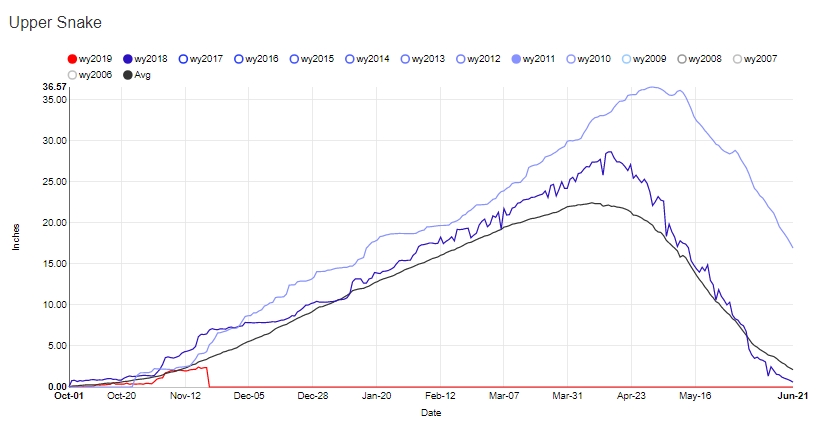 This water year is getting a bit of a slow start in the Upper Snake as it currently sits an inch shy of average and more than 4″ from last year.  2011 had a similarly slow early season snow build, but as the chart shows, it finished well above even 2018.

The COI line shows just one day-on-day change beginning at 1800 tonight and running through 1600 tomorrow as 125 MW is added to TTC.  The line is forecasting 325 MW lower than what was shown last week.