We’ll resume today’s post by looking at the MidC term markets, both outrights and rolls for HL. These are reported in period order. 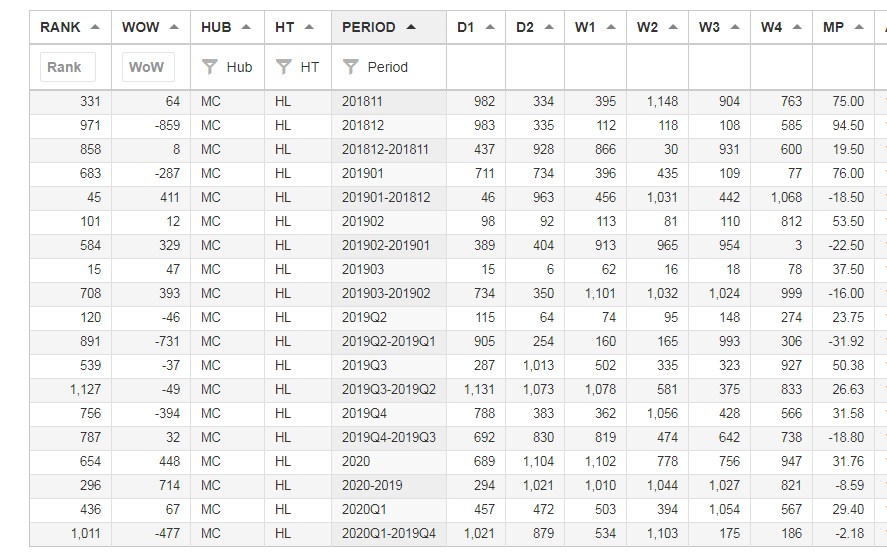 The WOW (Week on Week) is a good flag for finding the biggest moves, but we’re not looking for big moves in this post. Instead, we’ll just crawl the curve through the next year. 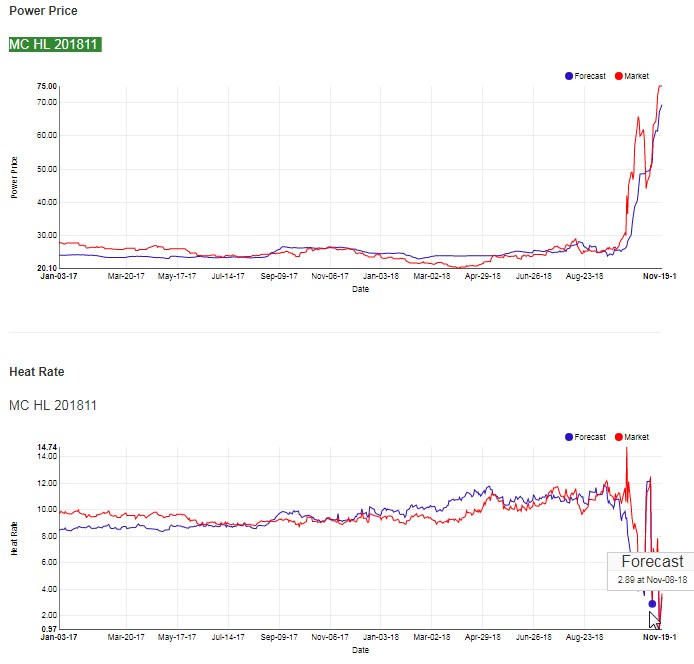 BOM’s about done and it is going out with a bang. Check out those heat rates, now its clearing at nearly a zero heat rate. Huh? The problem here is there are no fundamentals supporting these levels; it is all the fear of running out of gas. Given the warm outlook, which will take us through the end of BOM, there is no chance of cold-driven blackouts. Perhaps, over the long holiday weekend, these markets may soften up off of lower loads and maybe higher flows at Sumas.  I’d be inclined to short, as long as I was long the Dec. 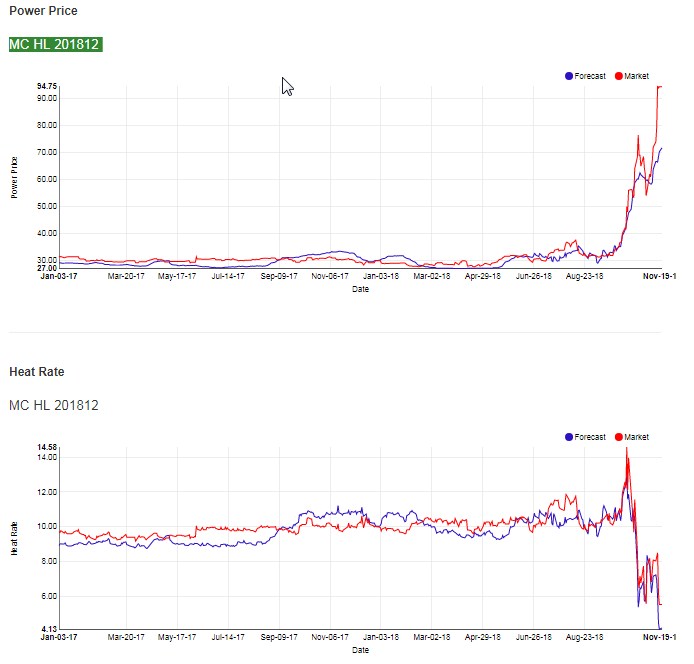 All the collective fear and loathing is being pushed into Dec; this is setup to be a massive bust should Westcoast prematurely restore flows on its pipe. About the only way you lose shorting at these levels is cold weather and even though we see no cold today, I’d not even think about being short going into this long weekend.  If anything, I’d buy this and sell the Nov, but let’s look, not speculate. 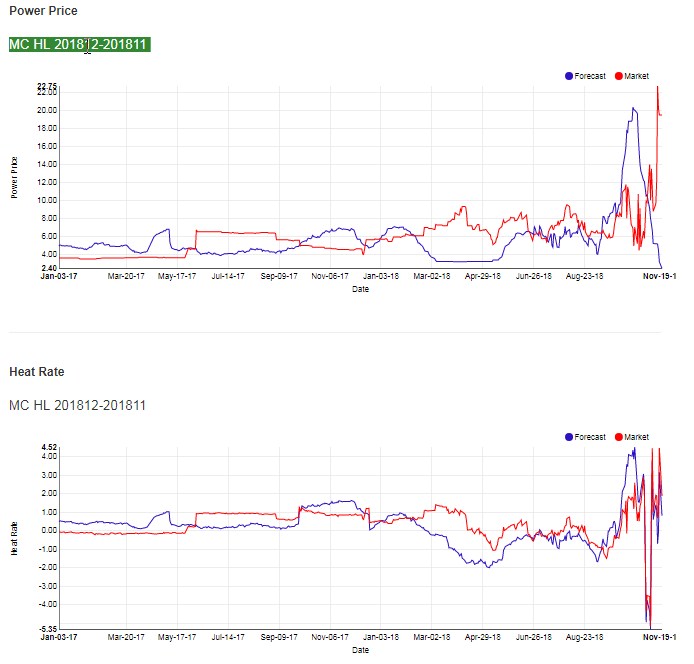 Wow, there’s some volatility, especially in the heat rate. Makes you dizzy just looking at it. This isn’t cheap, that’s for sure; it was cheap when we put out our first buy on it ten days ago, now its kind of rich, but it kind of needs to be given all the uncertainty in Dec. If I had bought this roll ten days ago, I’d be more inclined to sell it, take the profits, and go into the holiday flat and happy. 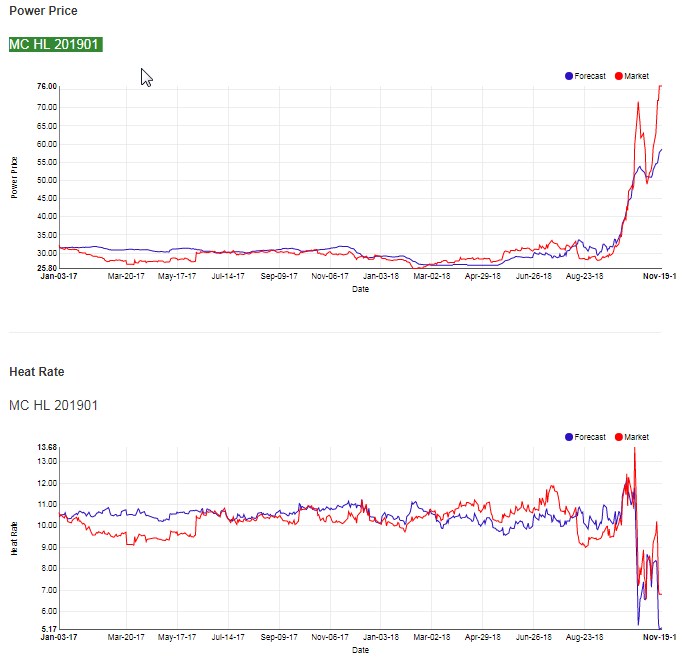 Jan looks like Dec until you price it against the roll, which is what we did.

And now you see just how rich Dec truly is. I’d be tempted to roll length out of Dec and into Jan at these levels. This nasty warm weather trend has been in play for months, what if it continues well into Dec? I know what the market will do in that scenario – it will sell the Dec harder than the Jan and you’ll bank coin on being long this roll. The problem is cold weather; if and when it arrives the Dec will gap $50 in a day while the Jan moves up $5-10. Don’t see cold, so if you want some action buy the roll and camp out on weather channel over the long weekend. 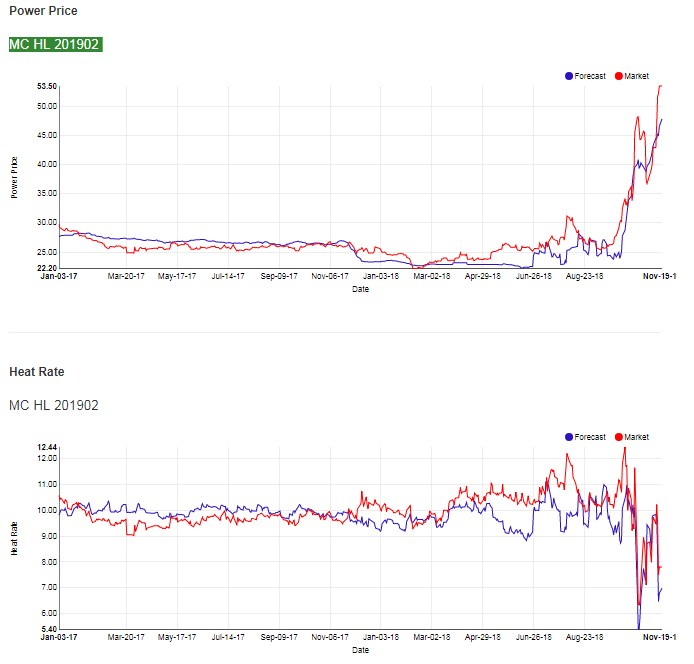 Feb, like Jan, looks rich until you price them together.

This roll’s been all over the map, too; these are $10 oscillations; now its back to contract lows. If you think the pipe returns to full capacity early, you’d buy these rolls because they will pay $20.00. Your fear is cold, but further out that fear is diminished. I’d buy this one. 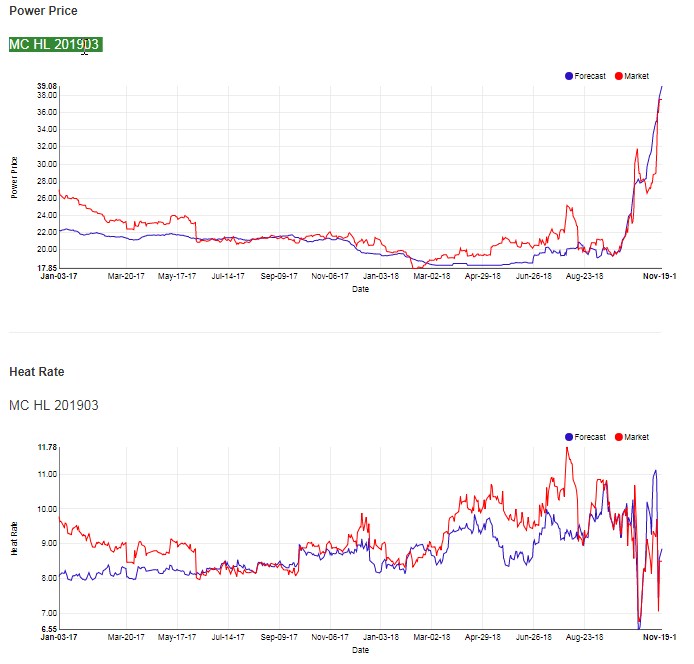 Pretty pricey and this is post-winter, usually. Does anyone really think Westcoast will keep its pressure at 80% for the entire winter? I don’t and would be tempted to short here, as long as I had some length in front. 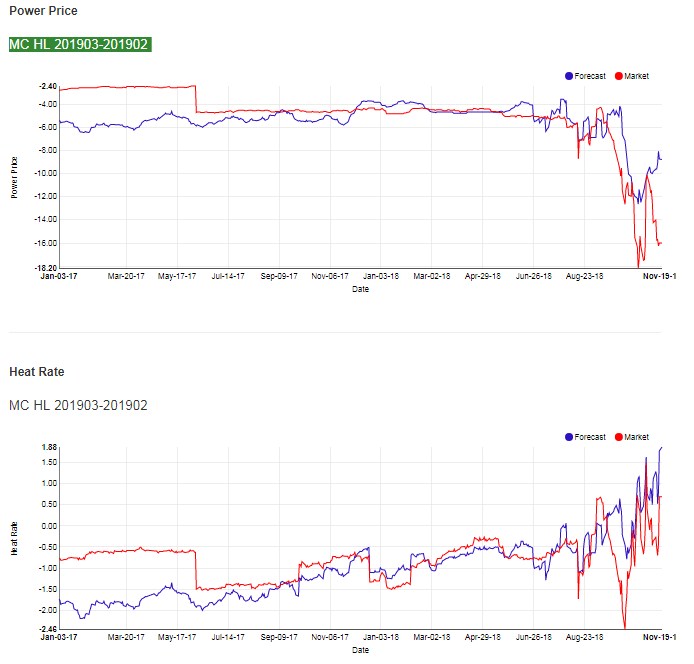 Like the other rolls, at or near contract lows. Not sure I’d play this far back, I think there is more liquidity and volatility closer in. 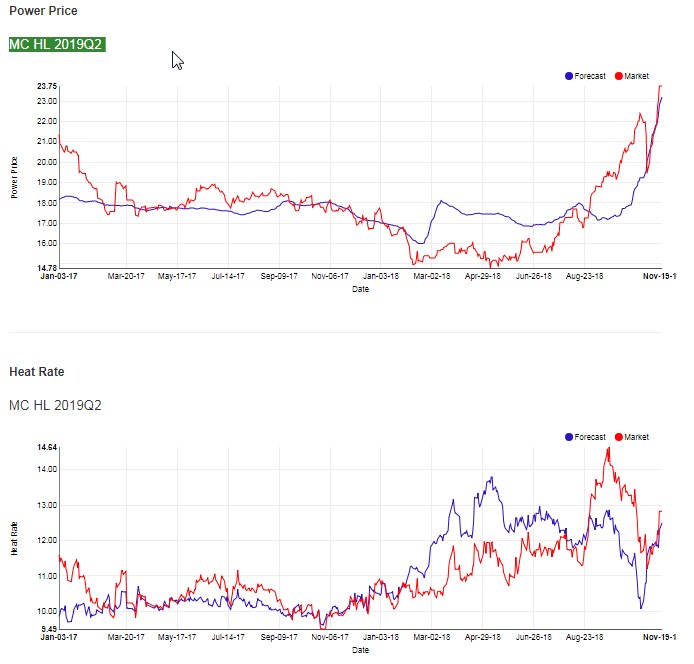 Look at the price, it is still cheap – like $22 and the heat rate is off 2k. We are staring at a very dry year, though that can change quickly with a big storm. Still, this seems cheap. 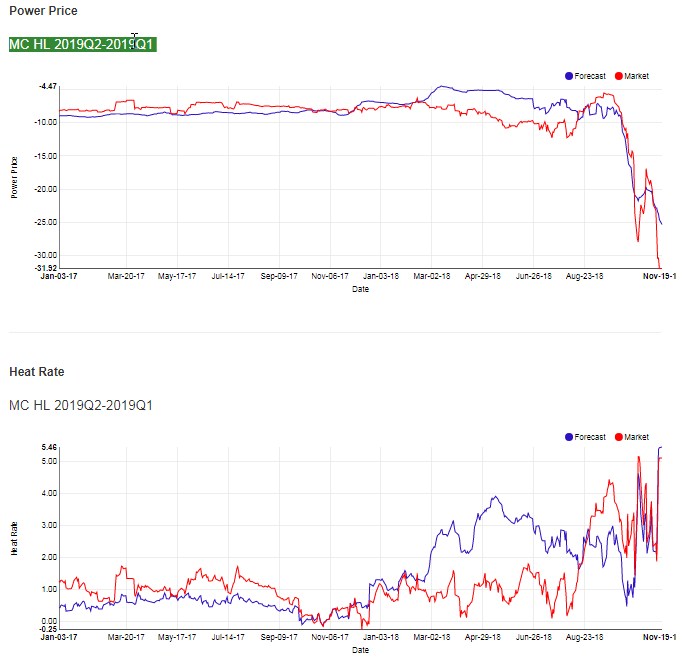 A solid contract low on the roll to the Q1.  Any hint of restoration to Westcoast and this will soar $20-30 up …on a Q. Any hint of cold weather and it will plunge another $10-20. Russian Roulette with six bullets, anyone?

Q3 is rich, but it is a dry year, yet will it stay dry? Doubt that, not given the recent forecasts which suggest a changing of the guard. Still, shorting here is a risky play if it gets cold (cash will scream) or the pipe isn’t restored to full capacity or both. 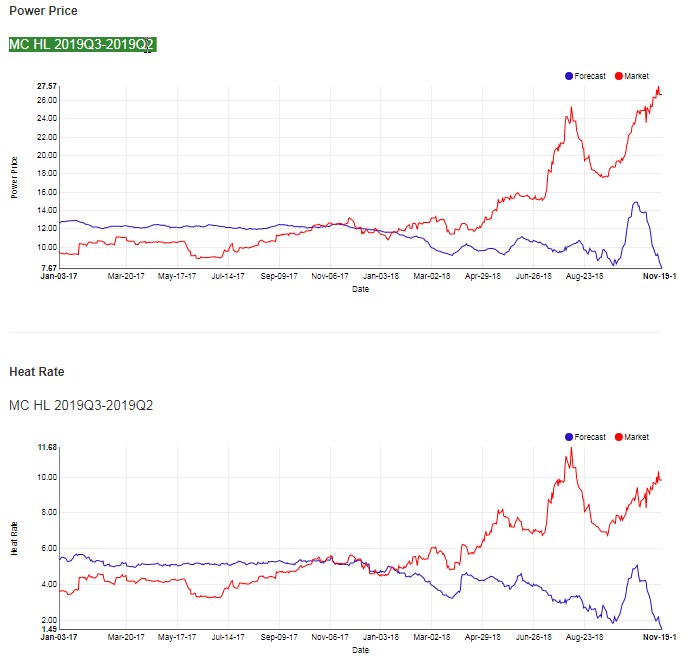 The roll is at a contract high in a dry year; I’d be inclined to sell this, but you might need to be patient as it has been moving up for three straight months. That said, the odds of Sumas issues affecting MidC in Q3 are much lower than Q2 ..and it is a dry year. 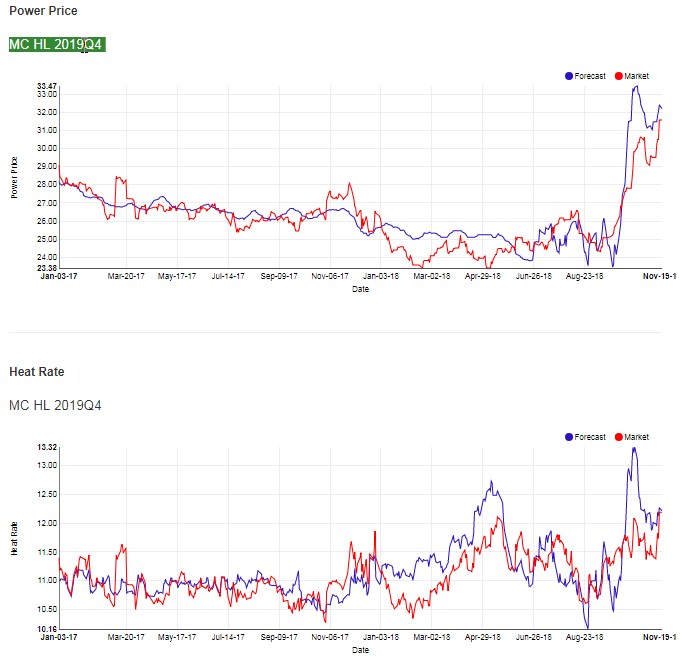 Heat rate isn’t that high but the price is at a contract high, but then so is the forecast which confirms this is more fairly priced than not. 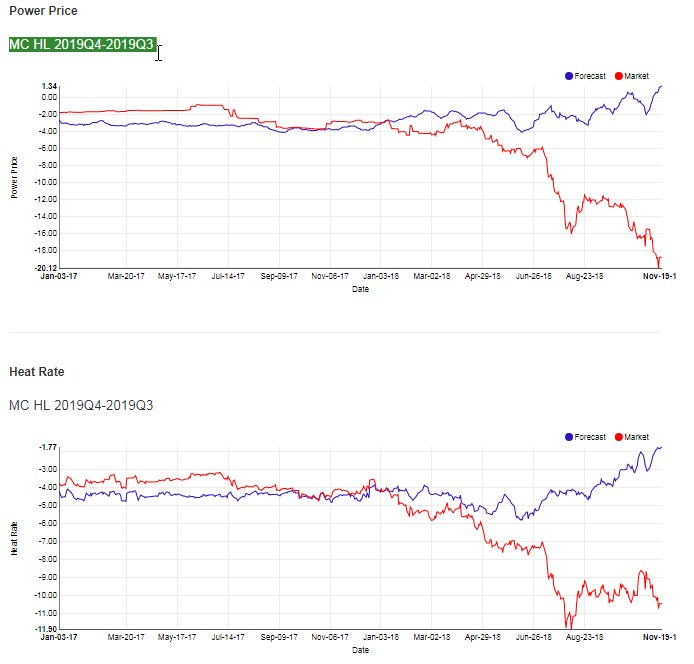 Wow, this looks miss-priced given that there is no Sumas influence other than mistaken hype; what drives this? Perhaps this reflects summer Socal Citygate issues more than Sumas; the bear market started last summer and its just been a steady sell ever since. One thing that might rally the roll would be a big water year but not seeing that today. 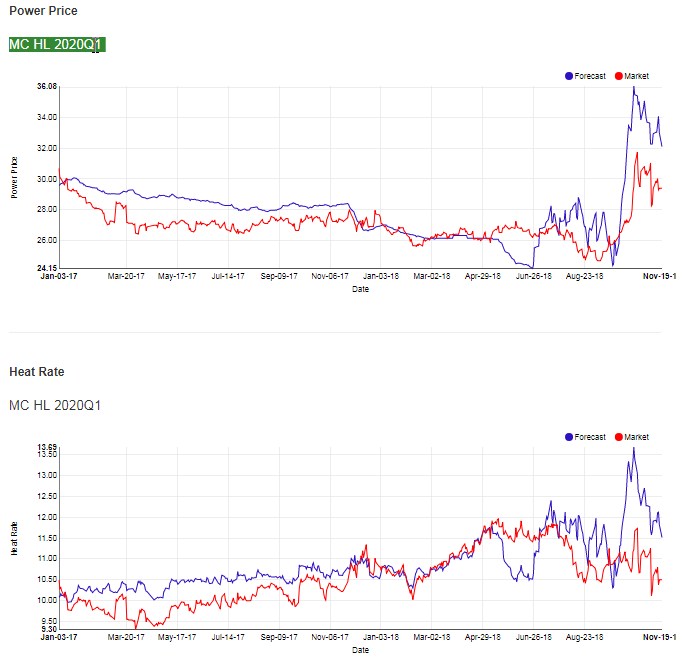 This looks cheap, at least relative to the forecast. I’d be tempted to own it and hope cash goes nuts and all ships rise in the flood tide. 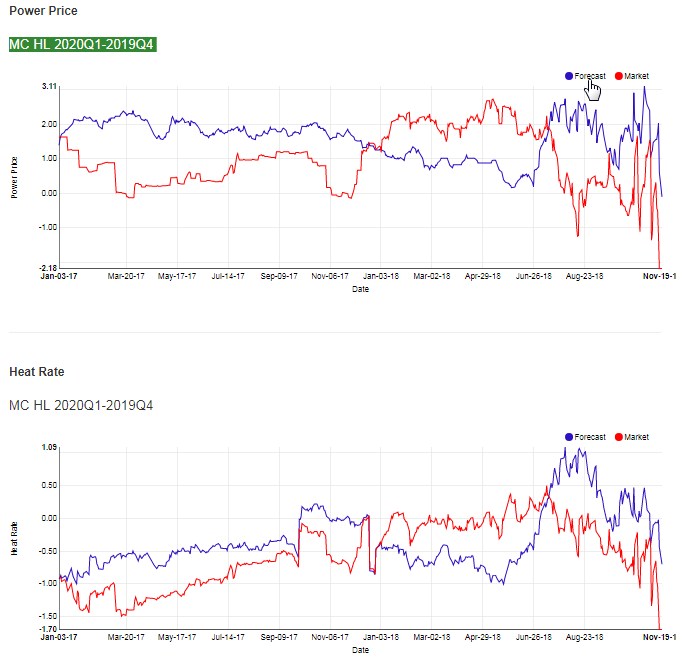 There isn’t any reason that this roll should be trading at a contract low; Sumas won’t impact either strip; if anything, the Q1 might get more love than the four if Dec stays warm and the gas isn’t restored. I’d buy it.