NOTE on HOLIDAY – Ansergy will be open through Wednesday and closed on Thursday and Friday. We will post to the public chat if we anything interesting. 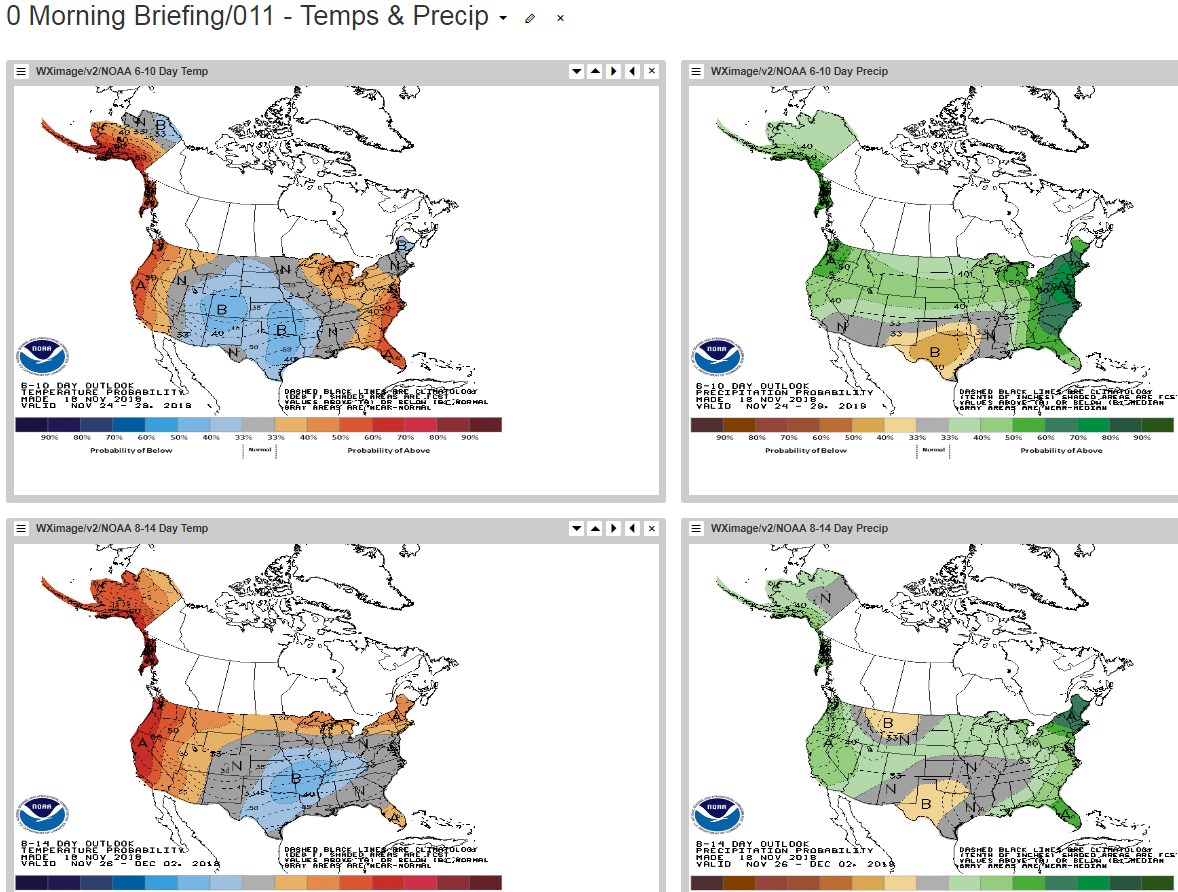 Warmer in the load-center coasts and now its wet in the Northwest in days 1-5. Both will help a tight gas market; just imagine where spot would clear if Portland were in the low 20s! or Burbank in the mid-30s?

This dashboard inspired a new virtual – Huntingdon minus Sumas; this would measure the allotment of gas to the US; we noticed Fortis pulling a more significant share over the weekend. Check it out, Huntingdon receipts were up but Sumas unchanged all of which means Fortis was up. We’ll add that this week.

These Sumas term charts are crazy, now the back of the curve is starting to move which suggests the market is less-confident Westcoast will be back to normal by March.

Citygate, too, is a  bull in the LA china shop. There will be pain should the City of Angels (haha, if ever there was a misnomer) get cold. Well, it’s not looking cold in the next ten days, but the gas market hasn’t seemed to notice. 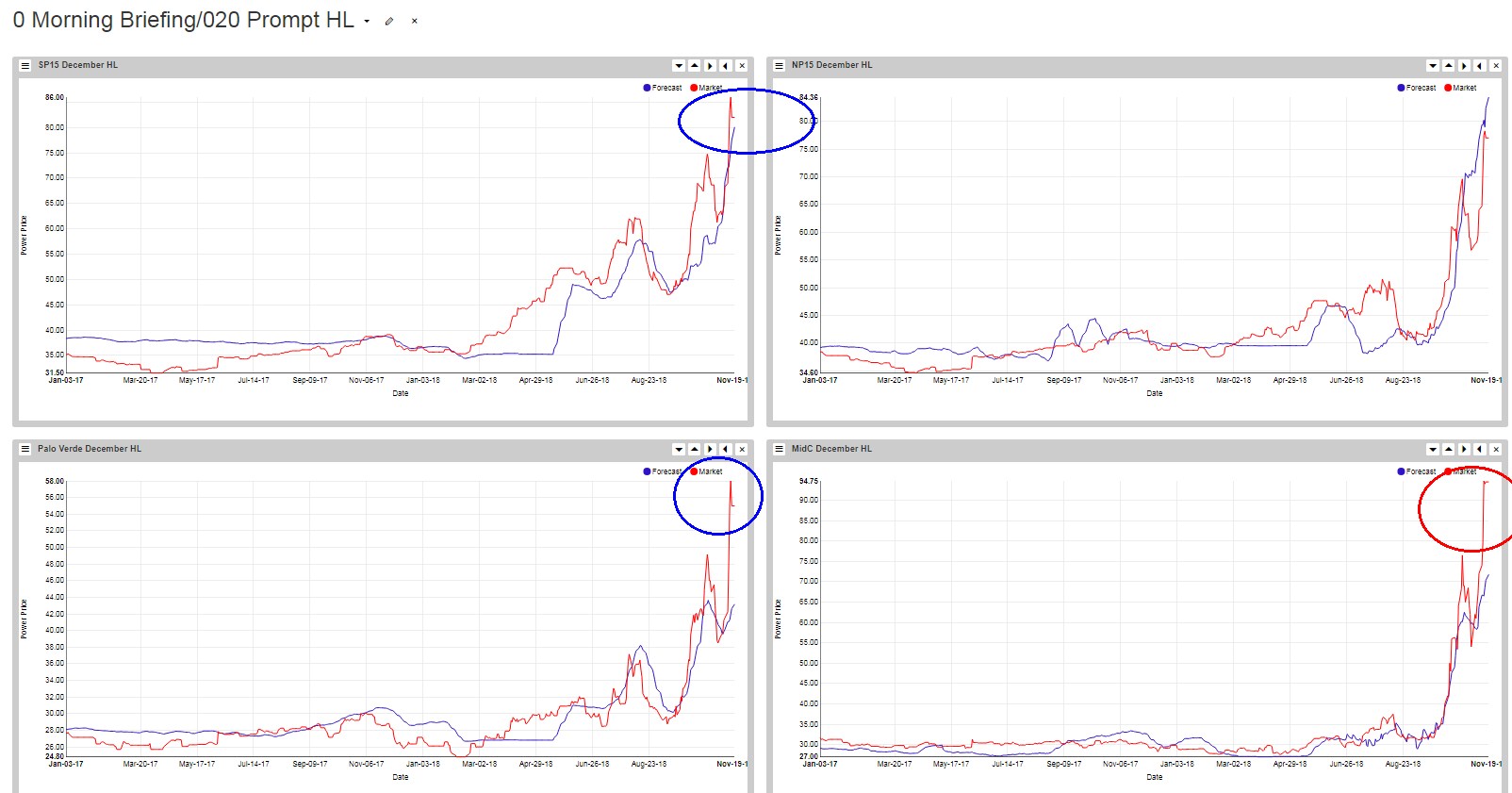 We’re writing about the Mid-C’s term market today, but had to post these Prompt Month prices; the MidC has not stopped to breath, it’s still climbing while Palo and SP pulled back a bit. 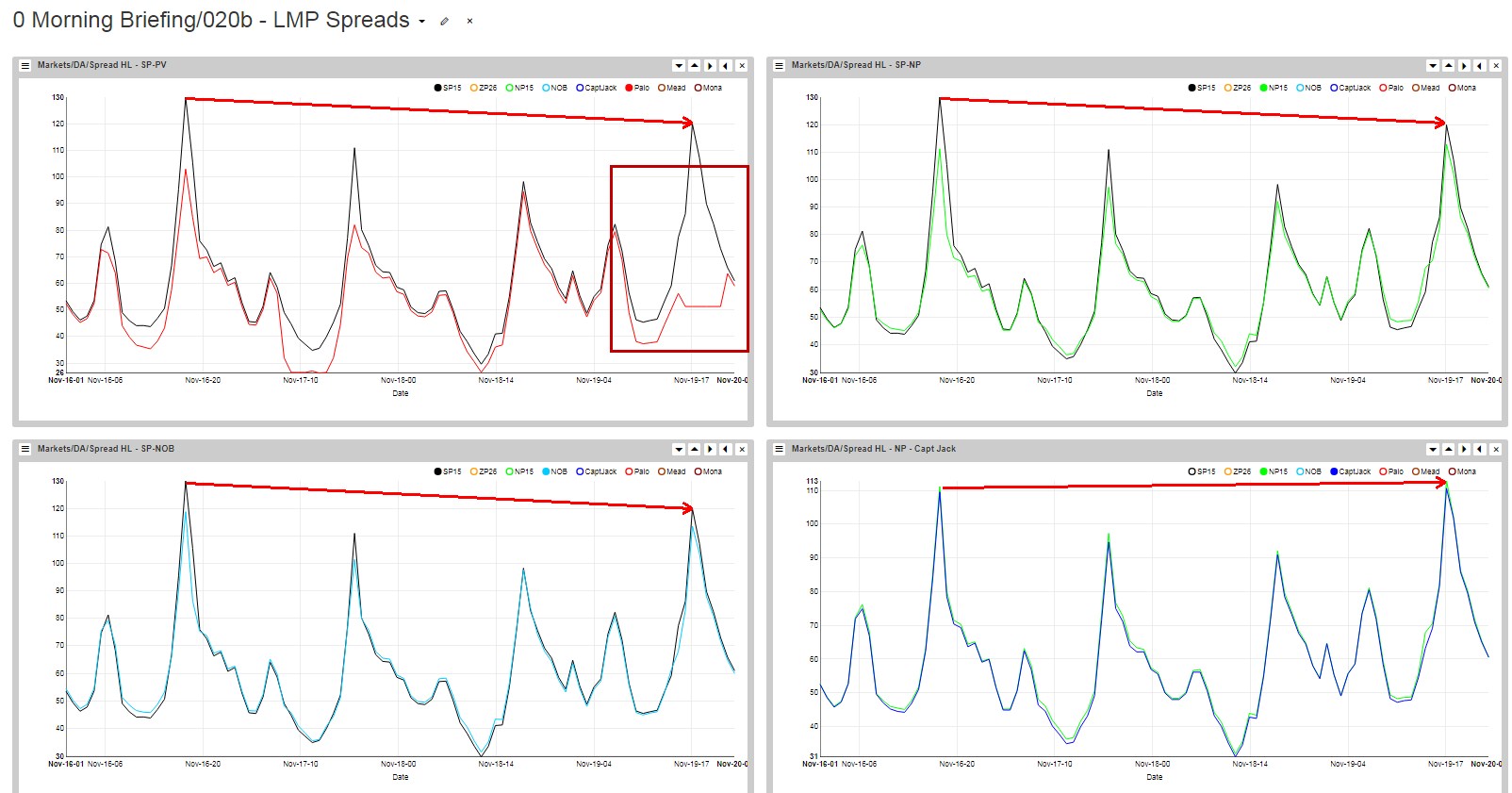 LMPs are off from Friday’s clears, except at NP which is up slightly; the bigger takeaway is the levels – all triple digits. Spreads between Palo and SP blew out in today’s DA market. 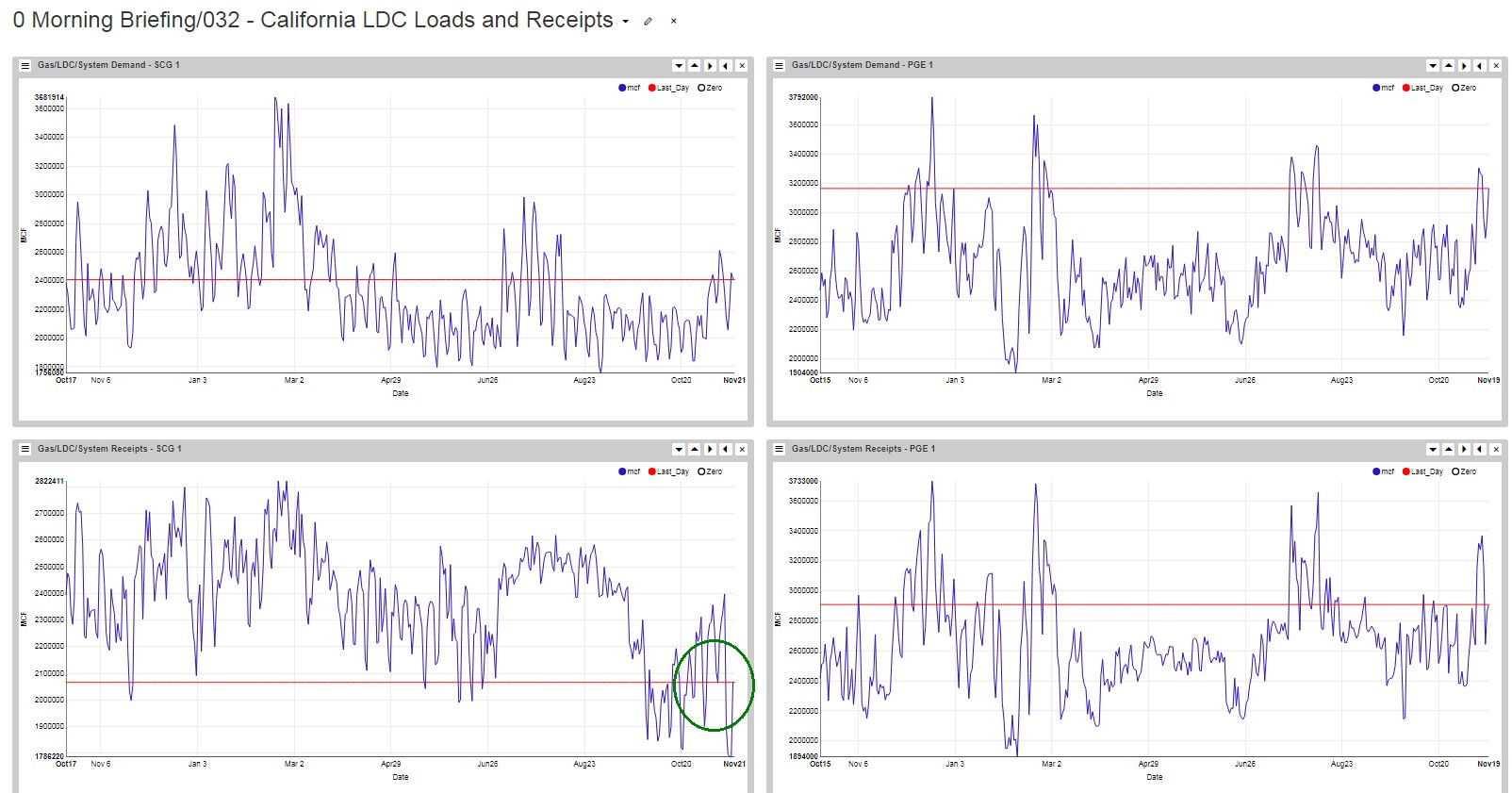 Socal’s receipts rallied hard over the weekend, but that isn’t because Wheeler Ridge is back; instead that bump is from a big draw in storage.

Nearly 400 MMCF was pulled, though the cuts at Wheeler were 600 MMCF. Socal’s site suggests Wheeler Ridge should be back to full capacity today, though we haven’t seen the flows in Envoy, yet. There is another outage next week: 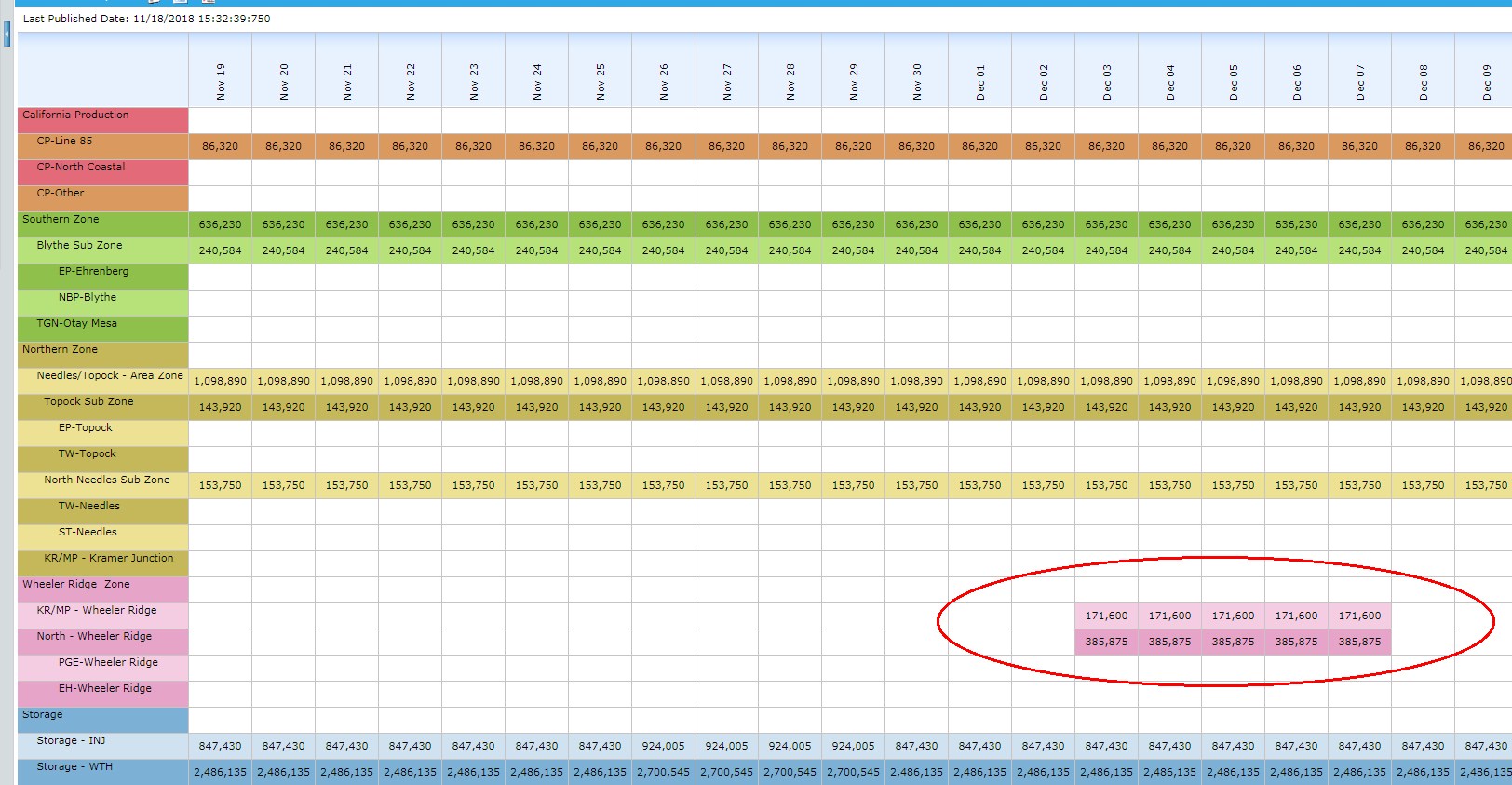 This next one is smaller, just 550 MMCF, but lasts four days versus three.

We mentioned how warm it was; these plots underscore how cold it could be; that bottom line is the ten-year low by date; the green line is the ten-year average and the red line is the current forecast. Heck, most cities can’t even post an average, let alone get close to a min. Just shows how much-deferred load (gas and power) is at play. 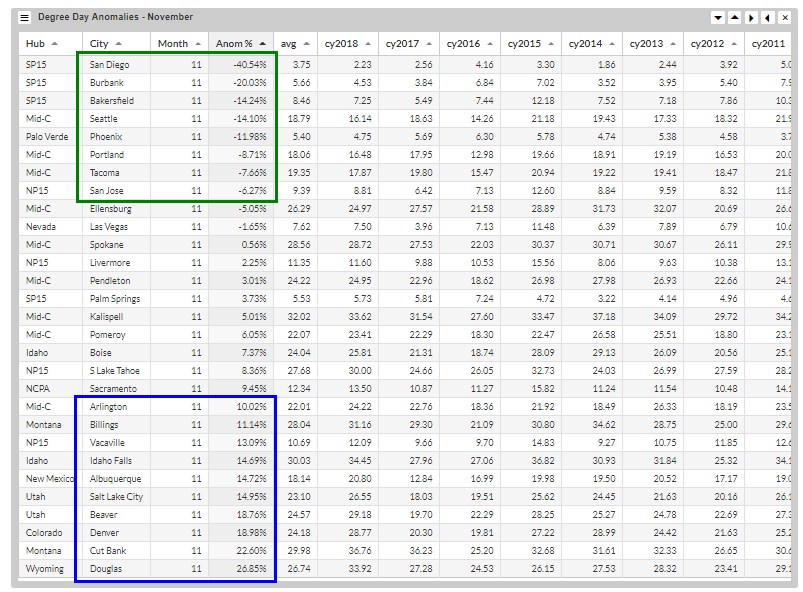 These are degree day anomalies by city; note something odd. All the large population cities (aside from Denver) have negative anomalies, and all the tiny, hillbilly towns are positive. Not sure what moral lesson to draw from that observation. 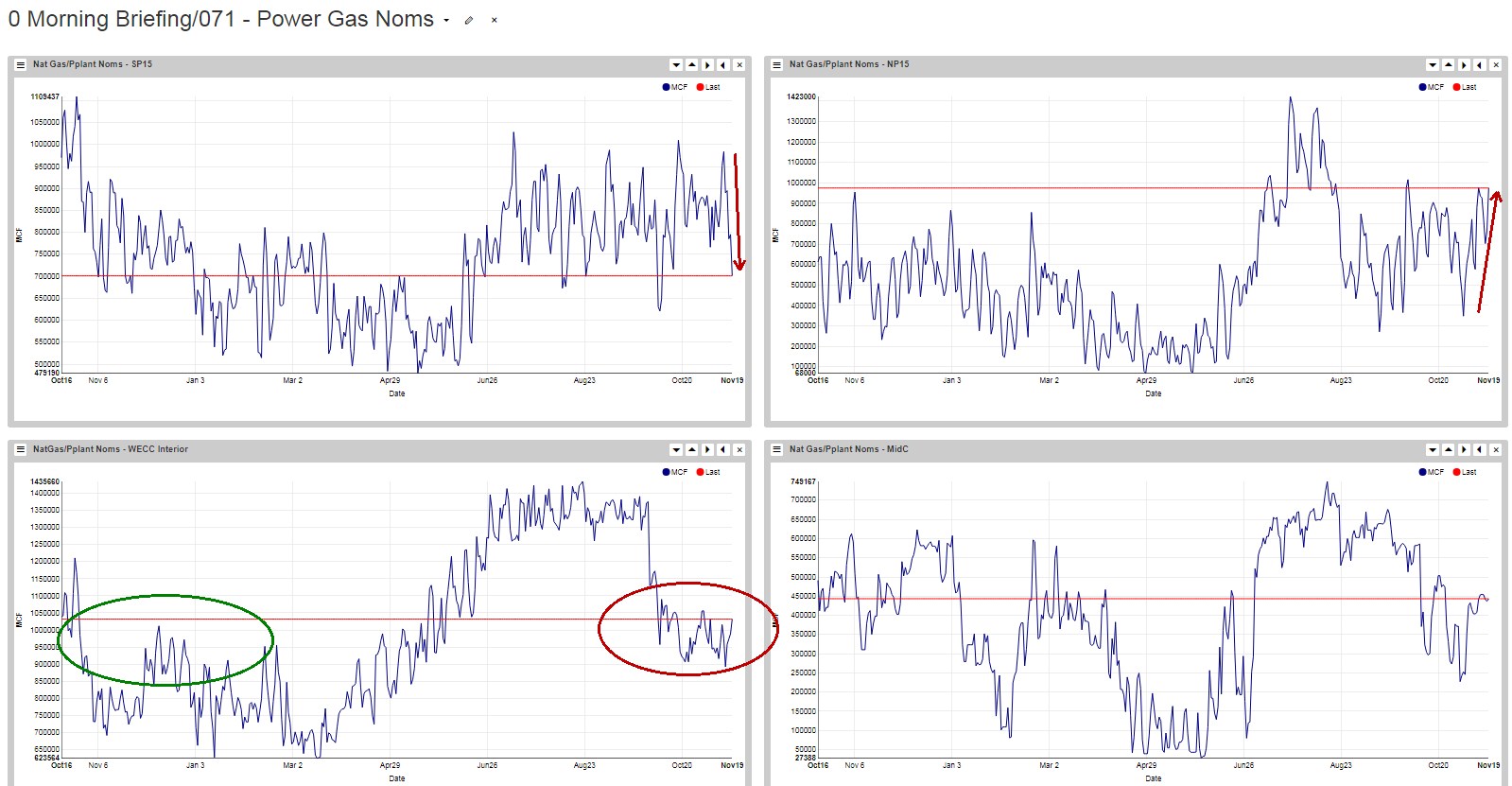 Socal’s gas noms took a nosedive, but that’s probably because the Citygate price hit double digits and the ISO shifted generation to ZP. Also noticed that though Palo’s gas noms are off from summer, they are above last year. 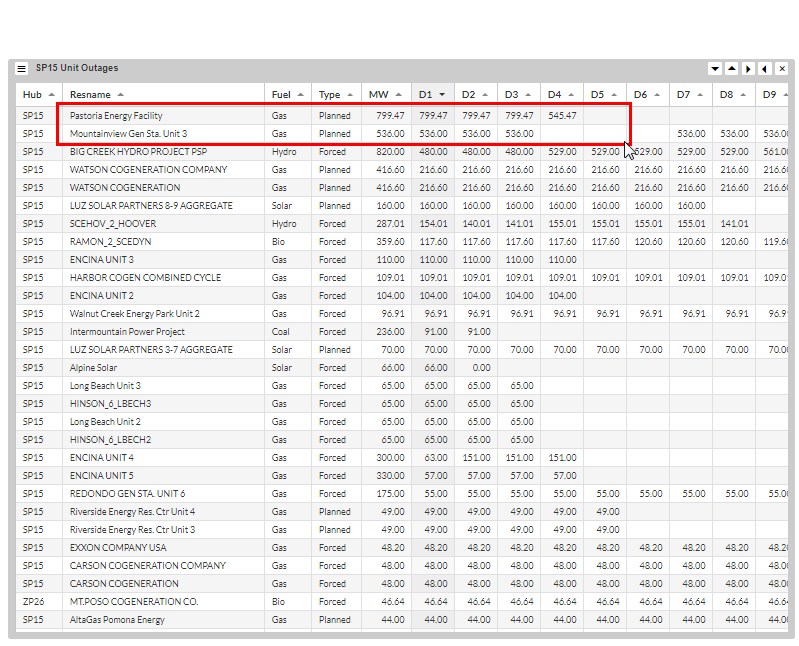 A couple of big gas units have been taken offline for maintenance over the weekend (Pastoria and Mountainview). I guess that’s good timing given the fuel costs for each.

All that smoke is keeping the solar radiation from striking the solar panels and total solar production is off. It is going to come off even harder when Kally gets this rain that is heading its way. Also, the wind is nowhere to be found at any of the reporting hubs.

This is a new dashboard that we made off of the MidC Load and Resource table which incorporates two views. The top two compare the current week (the last seven days) against the previous ten weeks. The bottom compares the same week against the last ten years, same days of year.  Note how much more hydro is being generated than in past weeks. 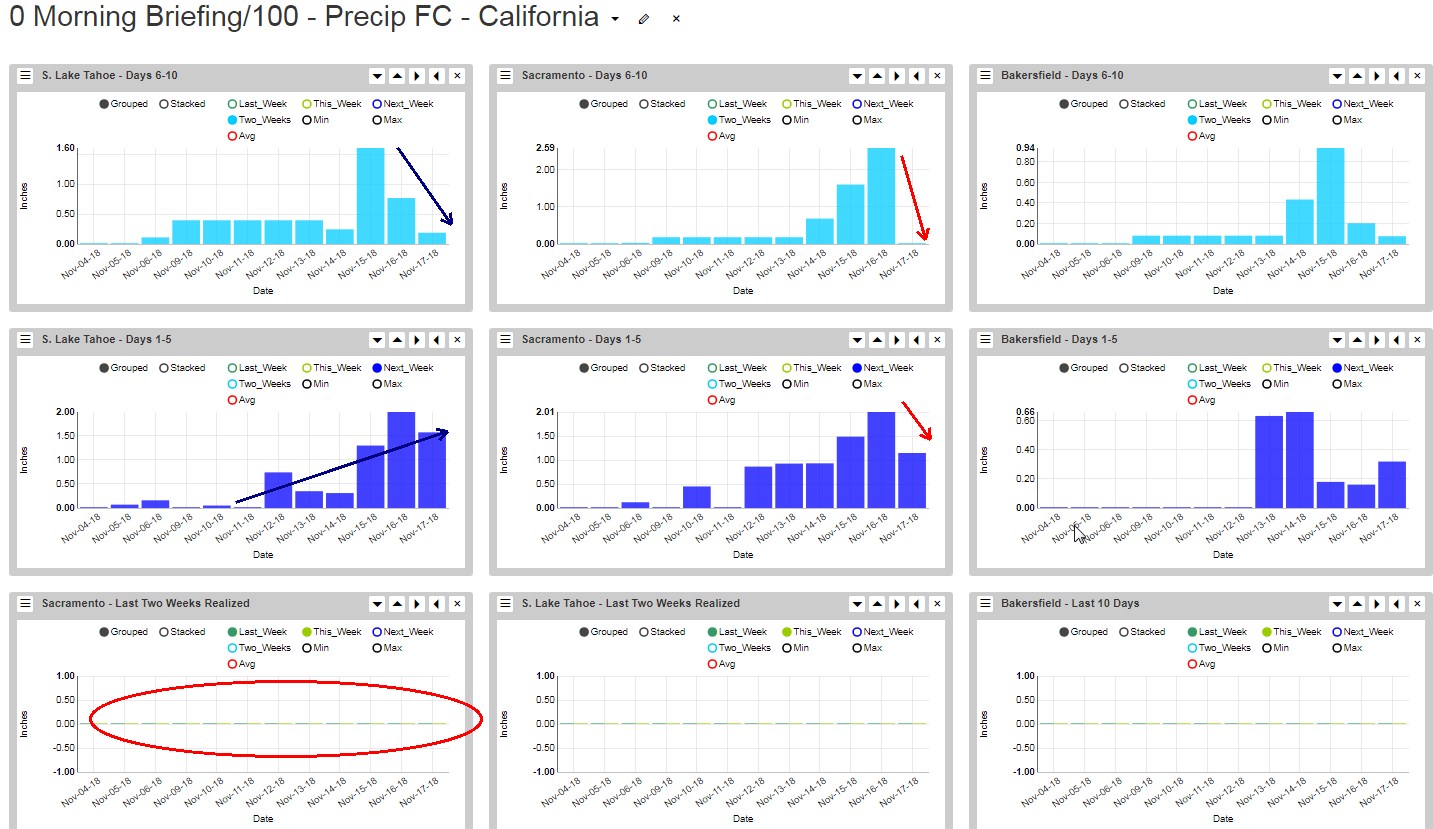 Another new dashboard, this one warrants an explanation. The top plot is cumulative precipitation for the next five days; this is a forecast. Each date on the X axis was the forecast on that date for those five days. The purpose of this is to show how the forecast changes across time. The second row is days 6-10, same format; and the last row is the realized precip over the last ten days. 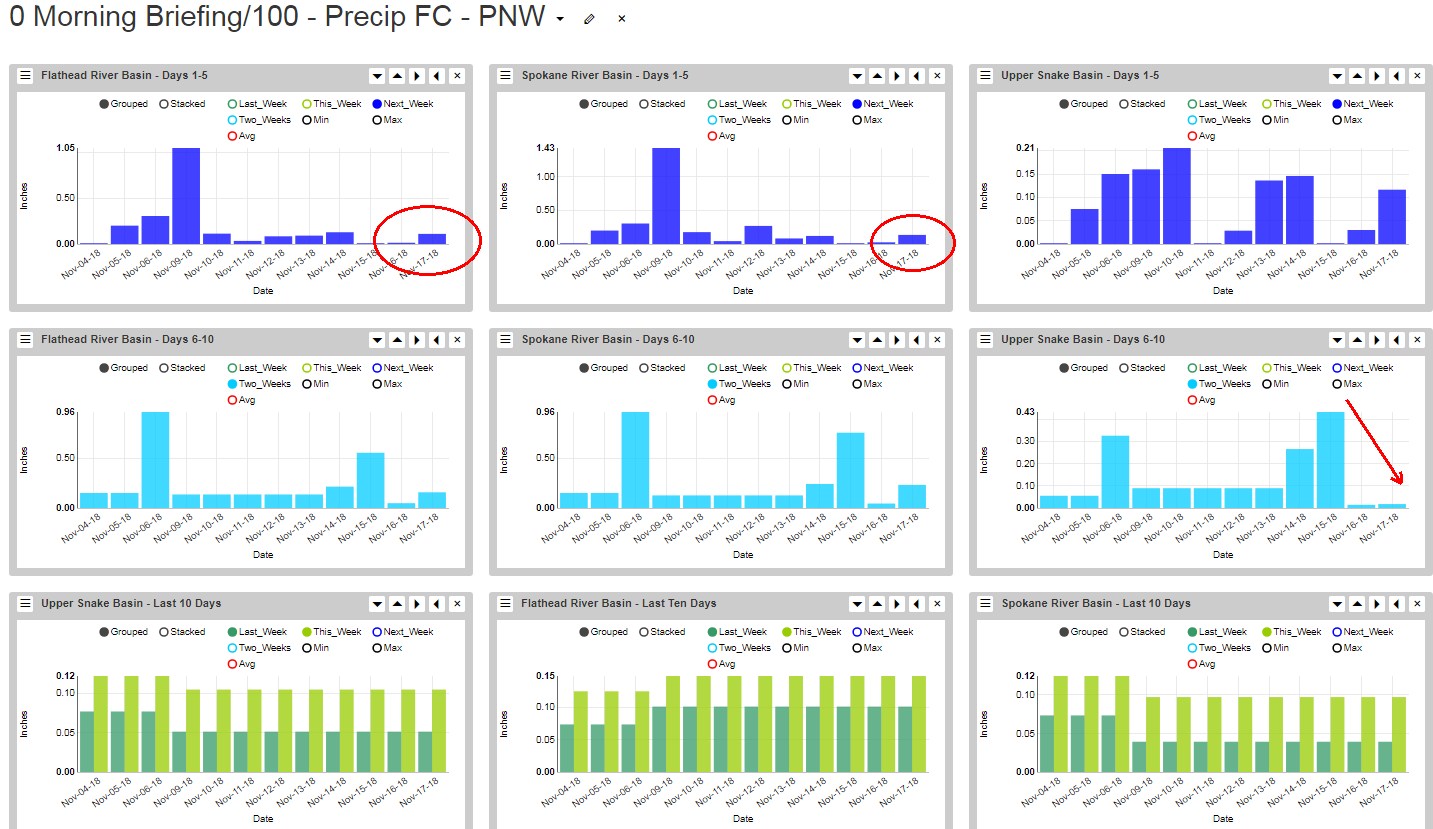 The above is for the Northwest, and we carved out three stations – the Flathead, Spokane, and Upper Snake. There are about 40 stations you can plot, click here to see those. 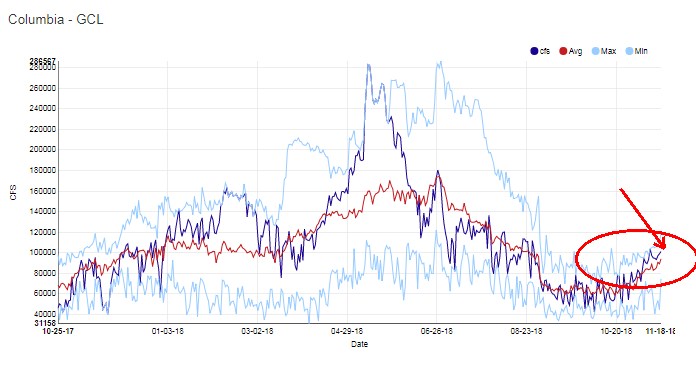 Coulee’s discharge is upward sloping, but that is just normal, though the current flows are approaching a ten-year high. That isn’t because of all the rain above the project; it’s due to the Westcoast pipe issues. Check out the L&R’s thermal cuts.

Some of that extra water coming out of Coulee is from a drawdown in the reservoirs; BC was already 2 MAF behind normal, now the US is falling below the ten-year average – and it isn’t even cold yet. 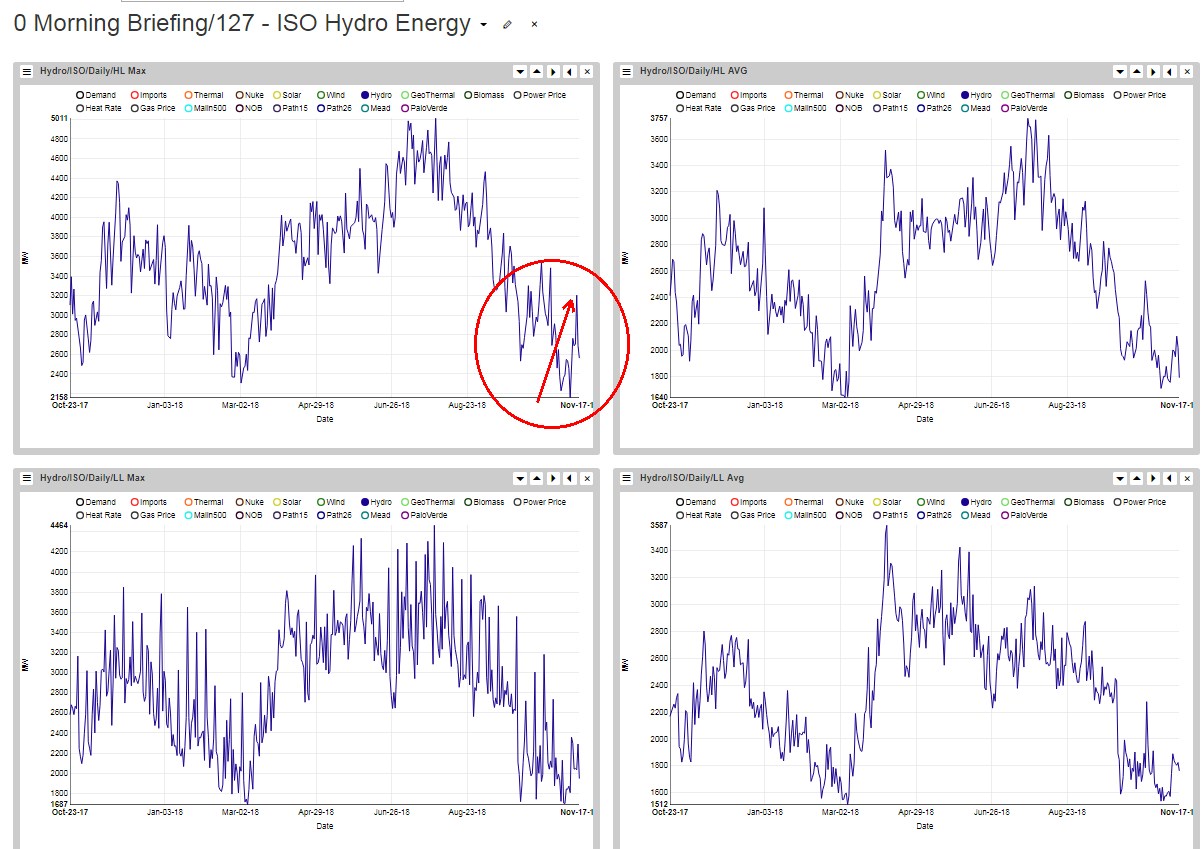 Peak hydro energy soared over the weekend as the ISO drafted its reservoirs to avoid those double-digit gas prices. Perhaps they feel more comfortable pulling water now that some storms are coming? 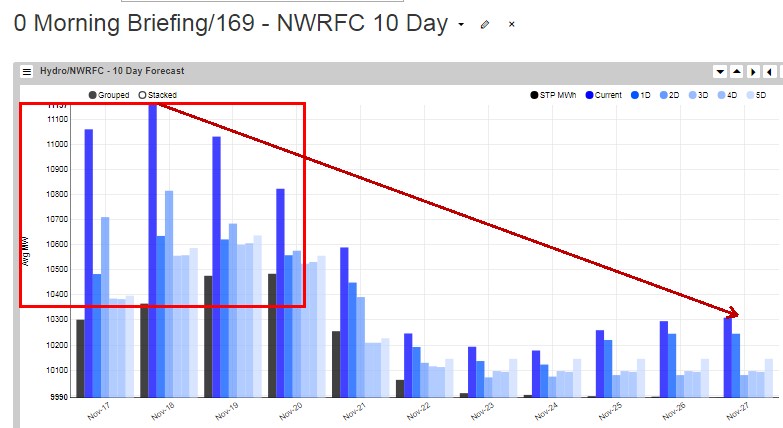 Friday’s Ten Day massively jacked Northwest flows adding nearly a gig of hydro, for a few days, then the forecast craters over the holiday weekend. Don’t think it suggests anything for today’s STP but the positive precip anomalies might incline the NWRFC to bump the entire strip. 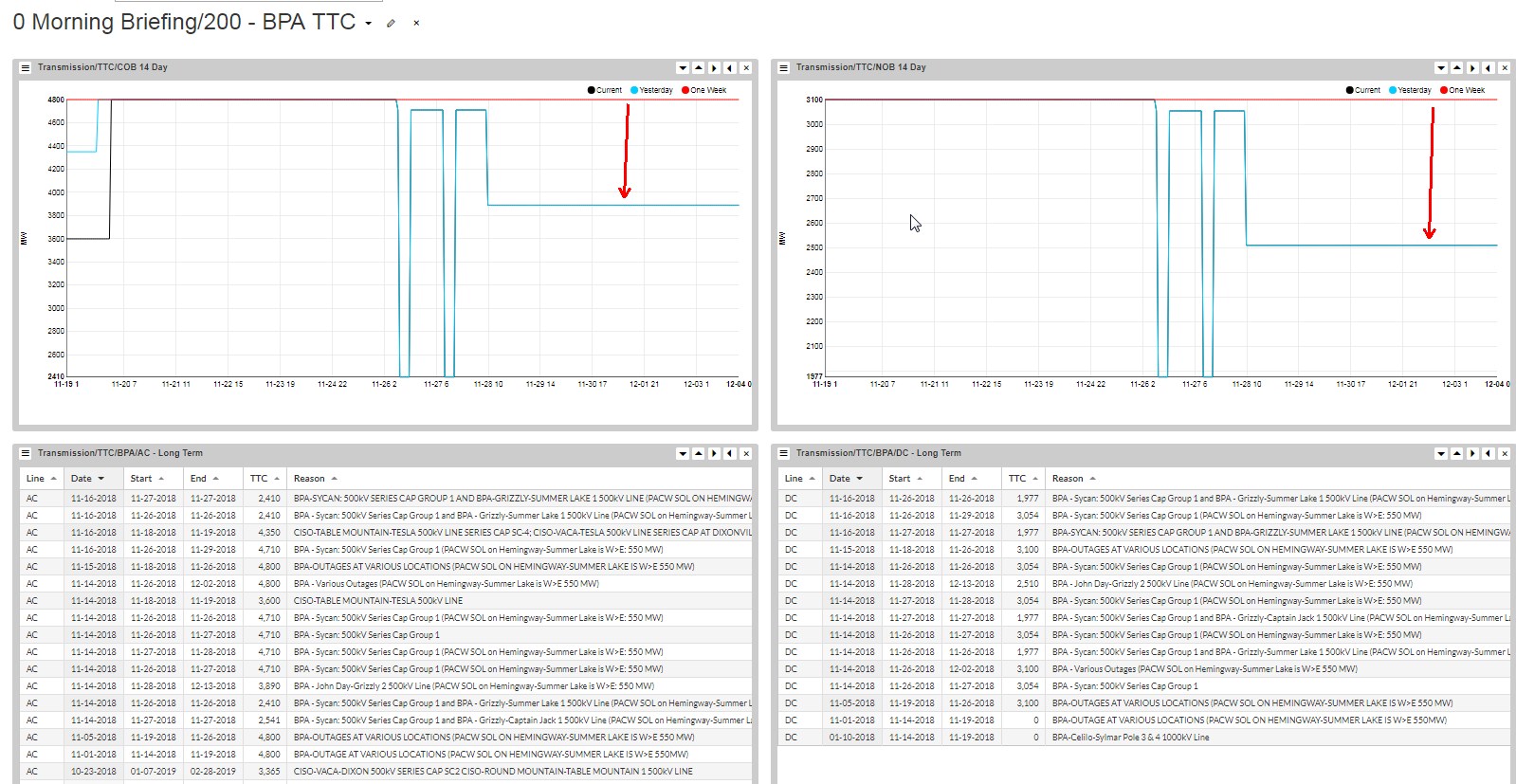 DC is back, flows southbound started yesterday. Both the DC and the AC have capacity derates next week.

The DC mostly flowed test power; it should be back to normal by this afternoon.

Near-term fundamentals are bearish, warm and wet, but the gas cloud hanging over the market should keep the short-biased bears hiding in their caves. We wouldn’t short much without gaining some confidence in gas; we need to see higher flows at Sumas. Meanwhile, how long will this warm weather hold out? Once it gets cold, things could get ugly bullish. More on that in the next post.