Before launching into the trade ideas, let’s briefly glance at the fundies. The theme today is near-term bearish, very much so. It is neither warm enough in LA to drive cooling load nor cold enough in Portland to drive heating load. For the gas-starved Northwest, this weather has been a complete blessing. However, it has come at a price – no rain. October snow stations are mostly at zero; river flows are all from regulated drafts. 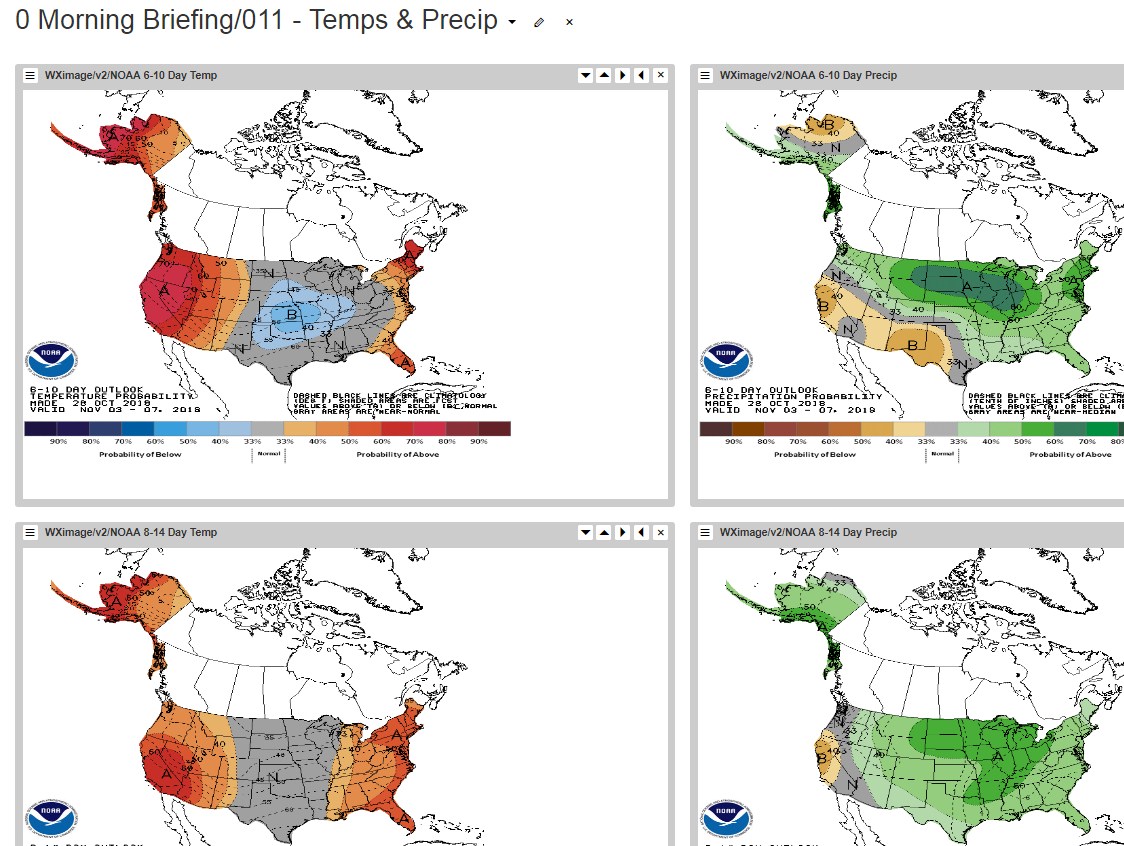 NOAA sees more of the same – warm and dry. November should begin with a loud thud; these aren’t the colors to drive a rally.

Sumas went out at $10.00, but we saw the GTNW hubs pull back and Socal Citygate remains relatively weak. No cold weather.

The term traders remain bullish on the Citygate, not sure how long that lasts given that storage is full and withdrawal capacities just rallied.

Now the LDC can pull up to 1.2 bcf/day out of storage, a level not entertained since a year ago. This 250 MMCF bump probably would have prevented Citygate from trading $39.00 last summer and may very well avert high prices this winter. Recall, Socal storage is way ahead of the previous two years.

Socal is 19 BCF ahead of 2016 while PG&E is 24 BCF “BEHIND” the same year. Doubt either runs out of gas unless the winter is bitter cold and lasts forever. So far, it’s looking like bitter warm. The issue for Socal was never how much gas was in storage, it was always how fast could it pull that gas out; now, after the bump, it can now pull another 250 MMCF.

Sumas, on the other hand, remains bullish and faces an uncertain future that will be decided by HDD; for now, there are very few HDDs and the system can efficiently serve load; in fact, it doesn’t even need to draw down storage to meet demand, despite the Westcoast Pipeline curtailments. 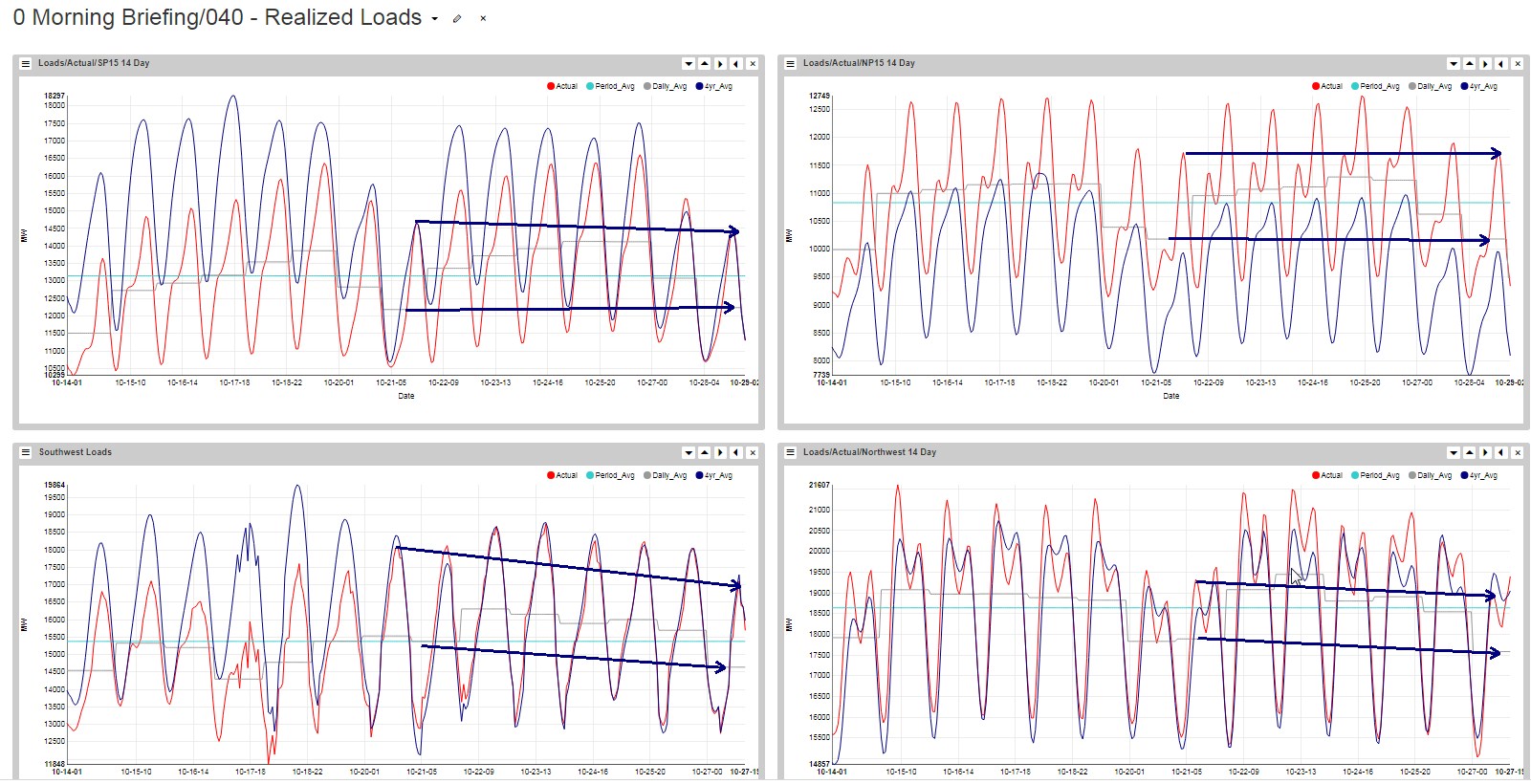 Power demand is either sideways or falling.

The trend for temperatures is to drift lower, all the time hugging normals; check out the deltas between the ten-year lows and the forecast. These are about 10-20 degrees, that faded blue line is the trip wire, and we’re nowhere near it. 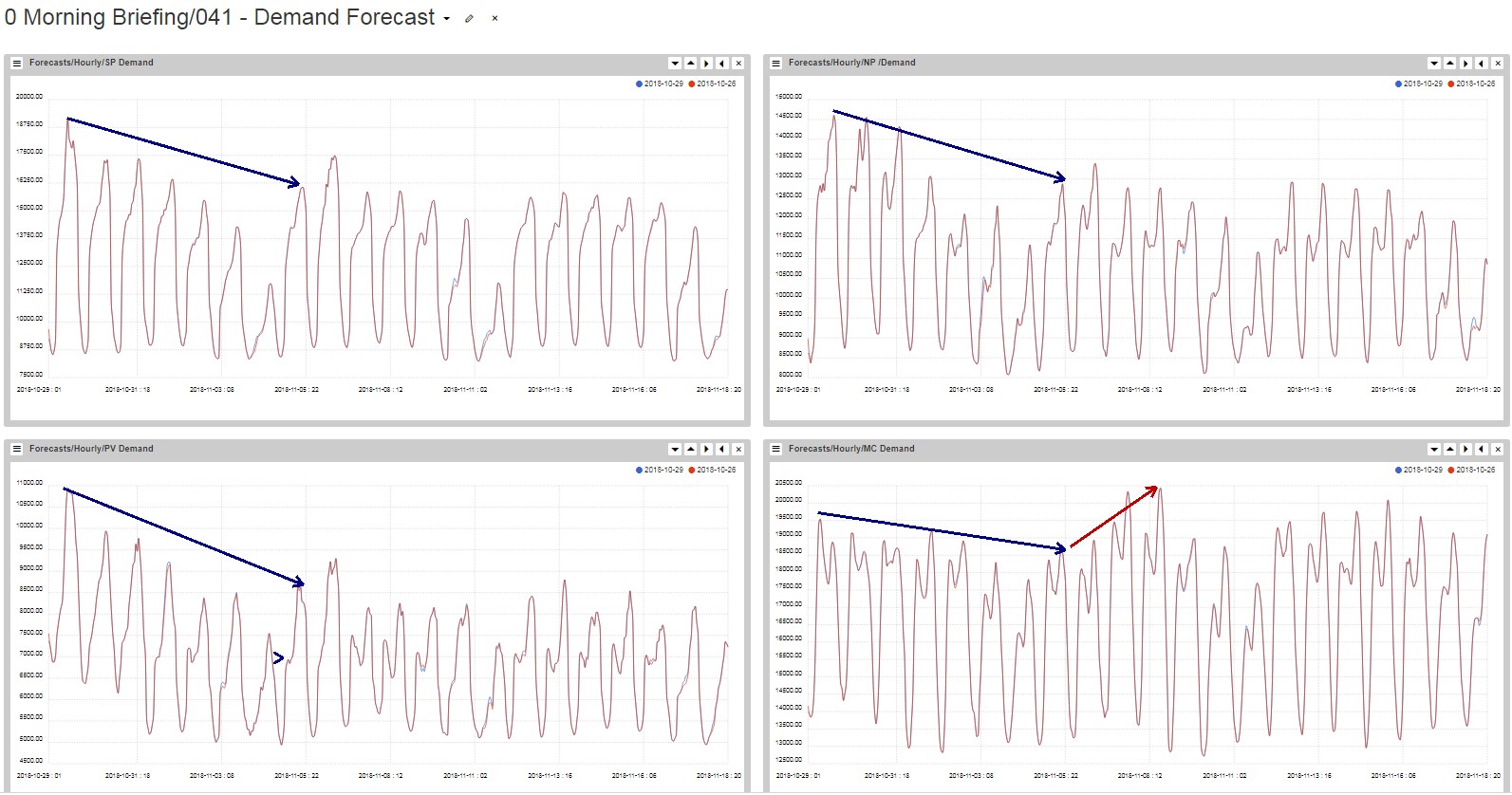 The Ansergy Load Forecast extends the drift down, except at MidC which shows higher loads out in days 8-12. 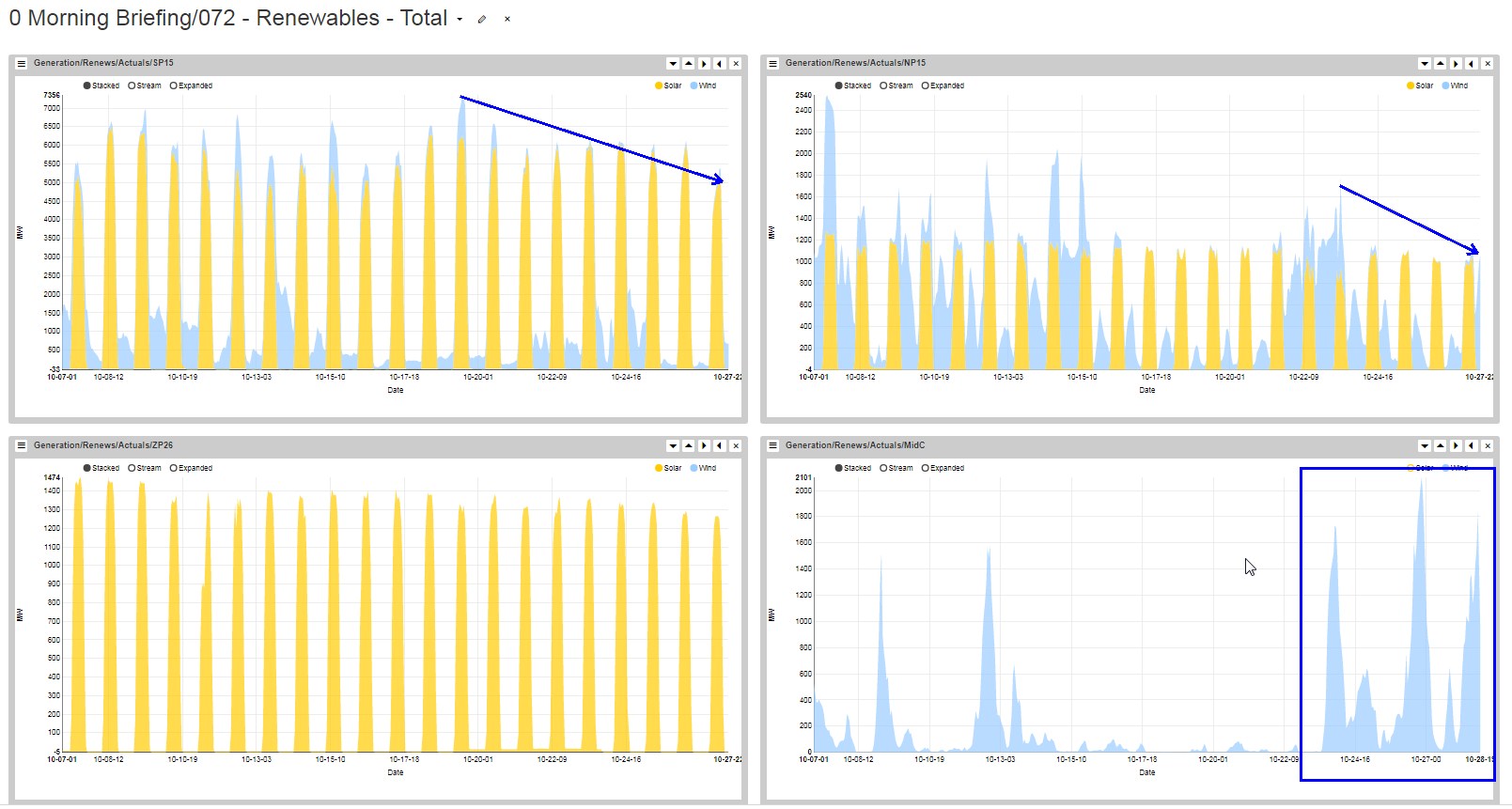 It’s starting to blow at MidC; the last few days posted a three-day high for the month. Now that the week (#43) is over let’s look at the recap.

Loads were not any different than prior years, nor was it warmer or colder. The big difference was gas price and thermals, every other element is in line with the ten-year averages. Thermals are the mirror of gas price, the I-5 gas units are off, replaced with GTNW units.

The Precip forecast is notable for its missing precip. Missing as in compared to Friday’s forecast; Kalispell and Spokane each lost nearly an inch of rain.

A new dashboard which plots the water supply forecasts for GCL, IHR, and TDA for the Jan-Jul and Apr-Sep periods. The takeaway here is the massive NWRFC volatility when compared to Ansergy’s forecasts. We find their numbers surprising, perhaps disturbing, given the deficient levels of cumulative snowfall. 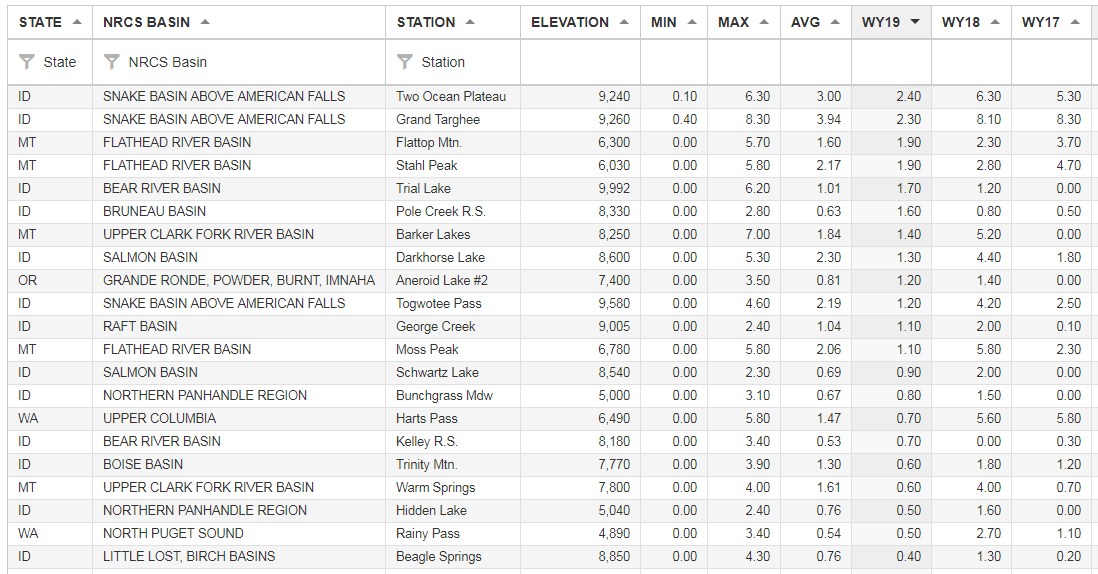 This new report (see Hydro / Water Supply) was sorted descending on 2019; so these are the stations with the “big” snow; the rest are at zero. Take note that the “big snow” is below average snow, so not that “big”. 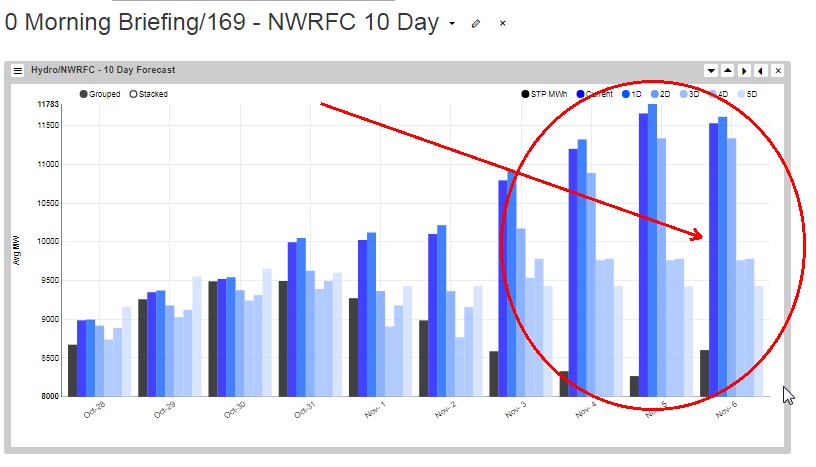 Meanwhile, our friends at NWRFC are tossing sliders and curve balls at us in their 10-day forecast. Yeah, you read that right, that is another three gigs of new hydro energy they’re planning for the first week of Nov. Assuming they don’t whipsaw themselves today, expect Novy to take a big bump in today’s STP. 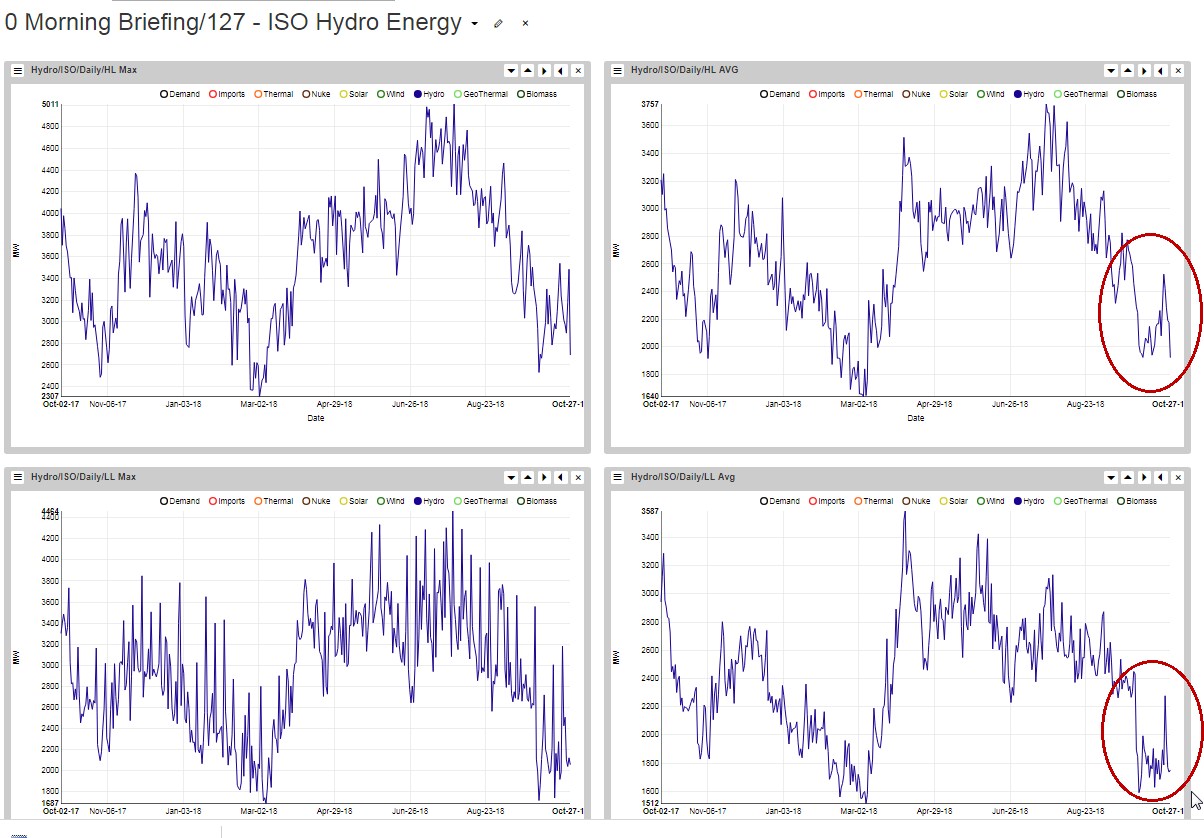 And the ISO is cutting their hydro energy as they are running out of water. 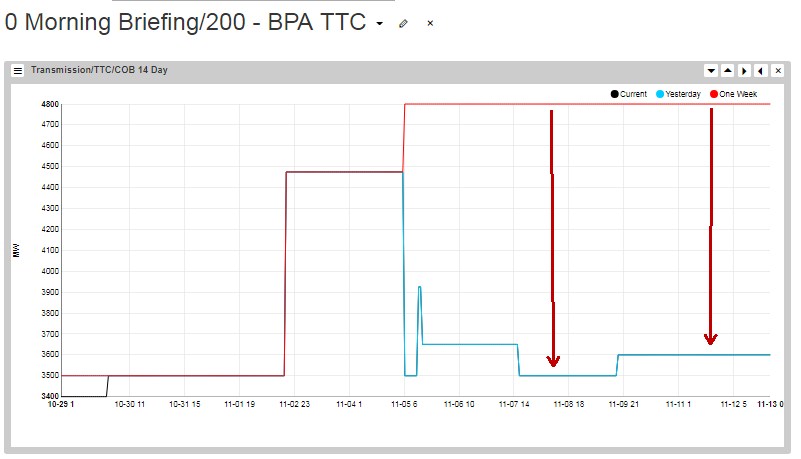 BPA has cut the AC’s TTC, not that it matters, the line doesn’t come close to TTC anyways.

We’re a bit surprised to see energy flowing north, into Canada, given that there isn’t enough gas to fire up the MidC’s Sumas-based gas turbines. We’d get it if BC had a fleet of its own turbines, it has none. I guess the province fears this winter as much as the rest of us and is cutting drafts by importing power.

We’ll look at a few trade ideas (hedge ideas, if you prefer, it’s the same thing) by first sorting on Rank; then we’ll sort on WoW (Week on Week) and cull a few more. 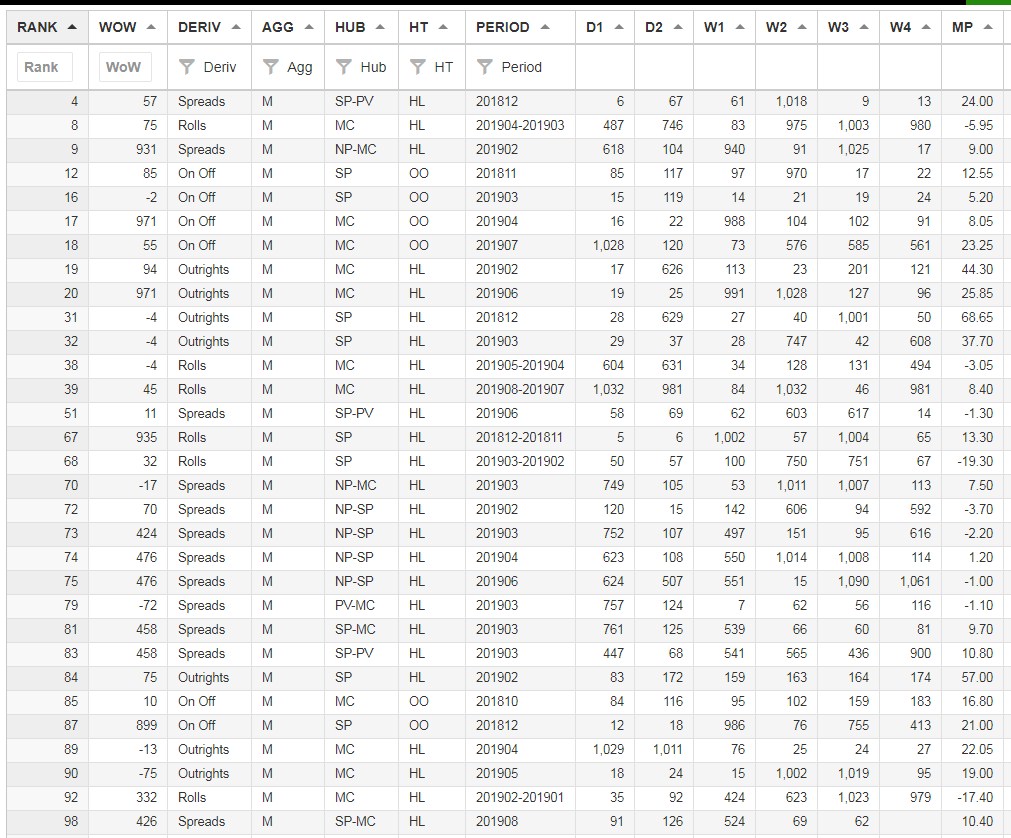 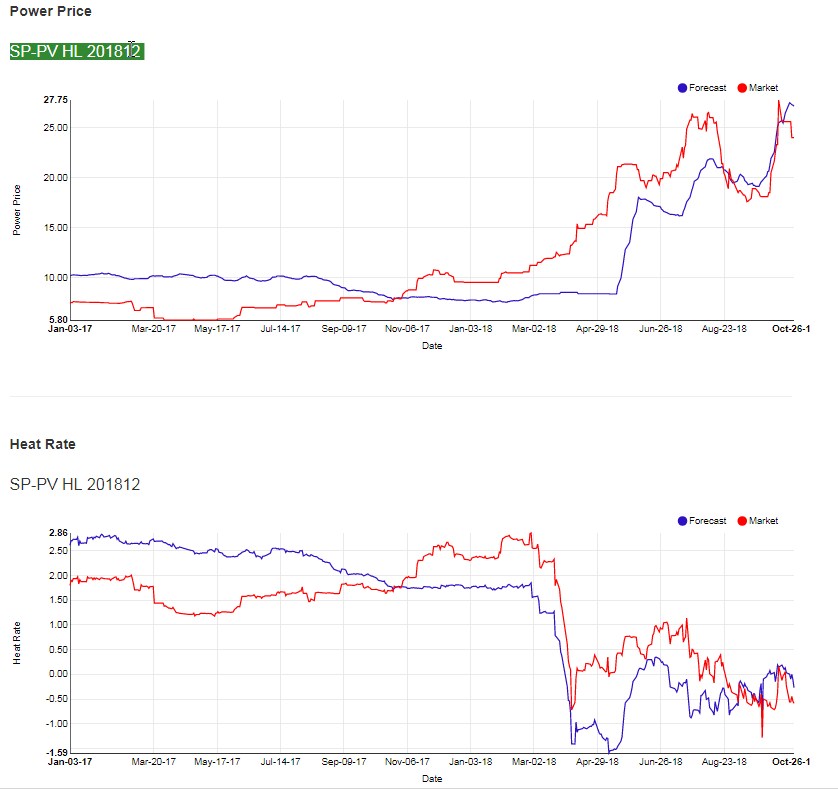 As a reminder, the product is highlighted in green at the top; the naming convention is HUB Hour type Period; where its a derivative, it will repeat the type; in this case, it is the spread between SP and PV for December.

What is most amazing about the Dec SP-PV is the underlying price – $25.00 for a spread! Of course, this is driven by the Socal Citygate-Border spread, and we did see signs of Border trading in sympathy with City last summer; should the same happen this spread will collapse. It will also fall apart if November is warm which it most certainly will be for the first ten days or so. I’d be comfortable selling the spread and just camp out on the Temp forecasts – as soon as Burbank posts a low below 40, buy it back. 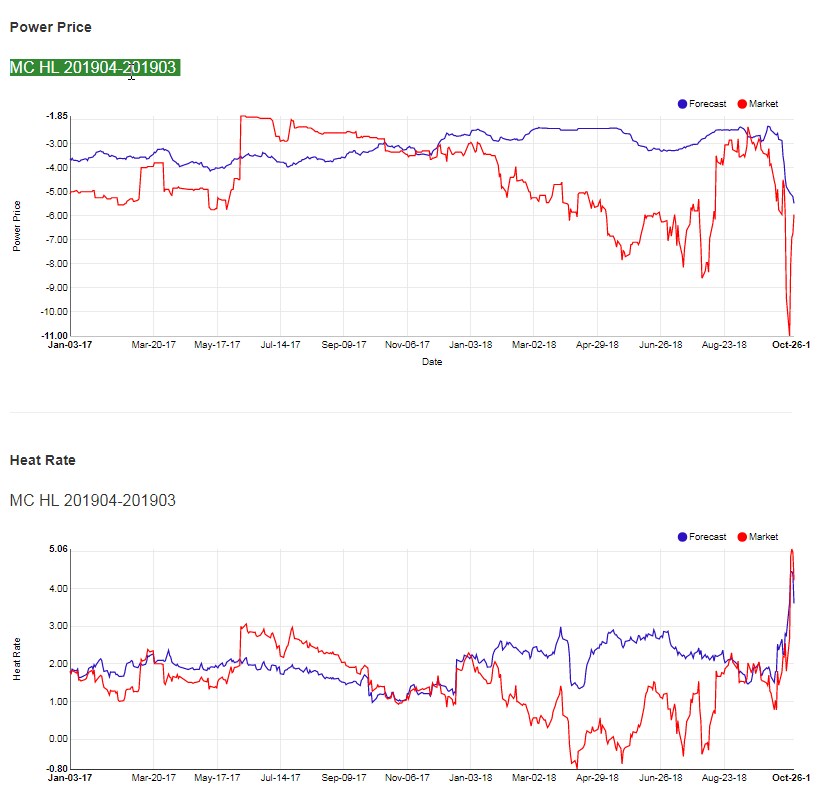 Note there are two periods. Hence it is a roll; April-March at the MidC. We wrote about this last week when it cleared March over by $11.00, and now it has screamed up to -$6.00 and is probably fair value. Both the heat rate and forecast are now in sync. PASS (after taking our $6.00 win). 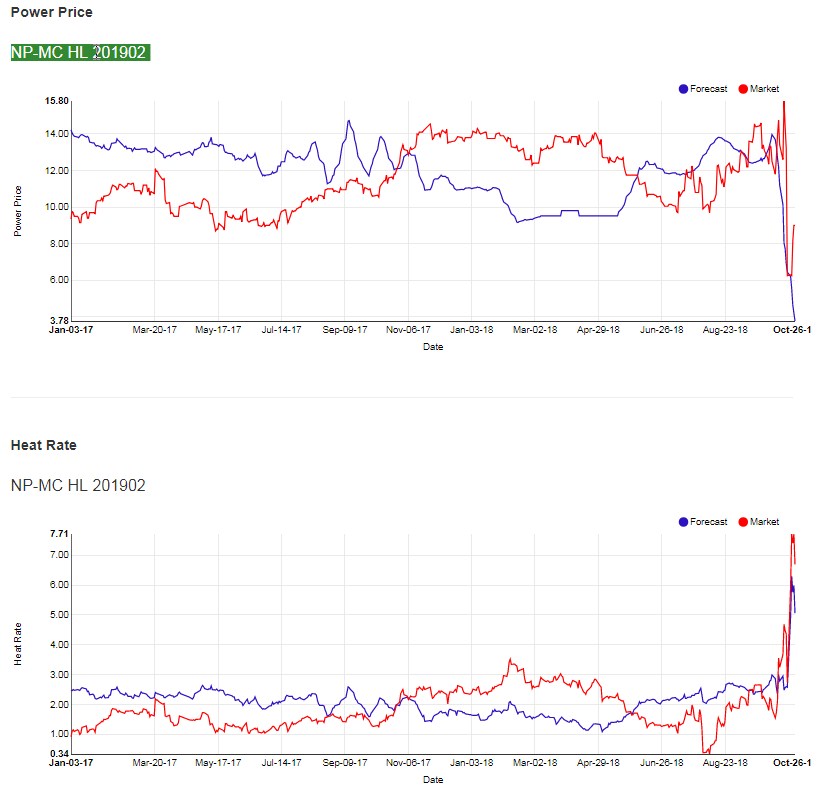 Another spread, this one is NP to MidC for Feb. The market ralllied off of contract lows, but the forecast kept tanking off of a rallying Sumas. Given that there is a reasonable chance of energy flowing northbound on the AC, and knowing that can theoretically only happen if MidC trades over NP, we’d be inclined to short this one, especially after the rally. Remember, NP is like Poland, sitting in between Hitler’s Nazi Germany (SP15) and Stalin’s USSR (MidC) and it is April 1939. Both dictators are aggressively eying NPs cheap gas.

This trade is the November  SP On-Off since the Hour type = “OO”. It carries an attractive rank because of the high prices, now re-approaching contract highs — but the forecast is higher. If this were the MidC, we’d be thinking about fading the on/off rally but not at SP. If they have gas disruptions, it will be during the daylight hours, not at night. 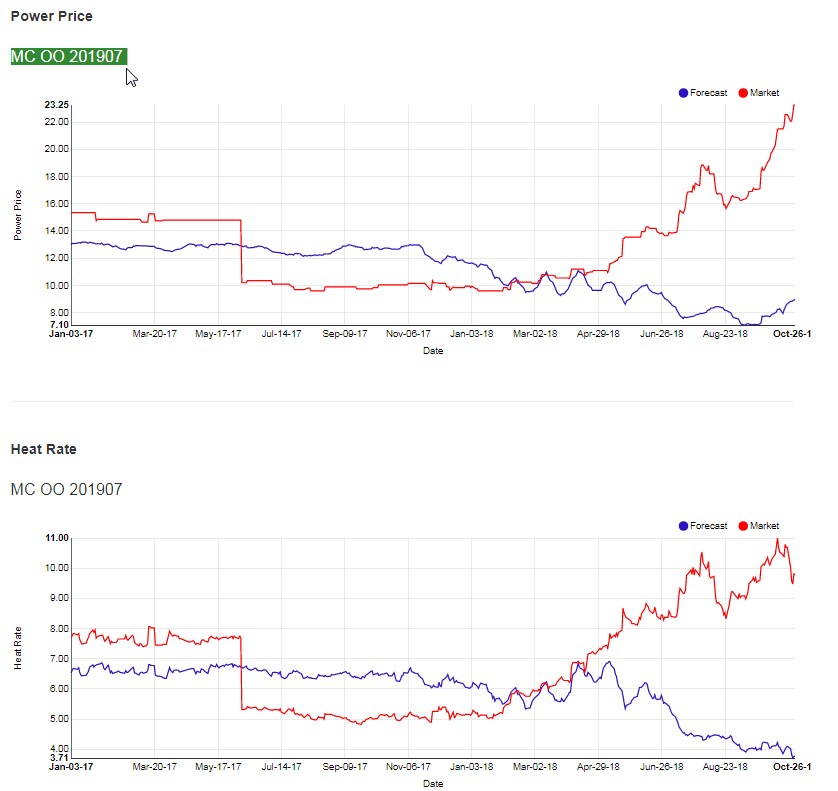 Looking deeper into the curve, to July, at the MidC July on/off. Notable given the massive Market to Forecast deltas and the lofty July price. About the only way this becomes a reality is for a blowout July, but seems a bit early to be banking on hot weather 9 months from now. Problem with shorting summer, in October, is there is a coming flood that will raise all ships. I’d pass. 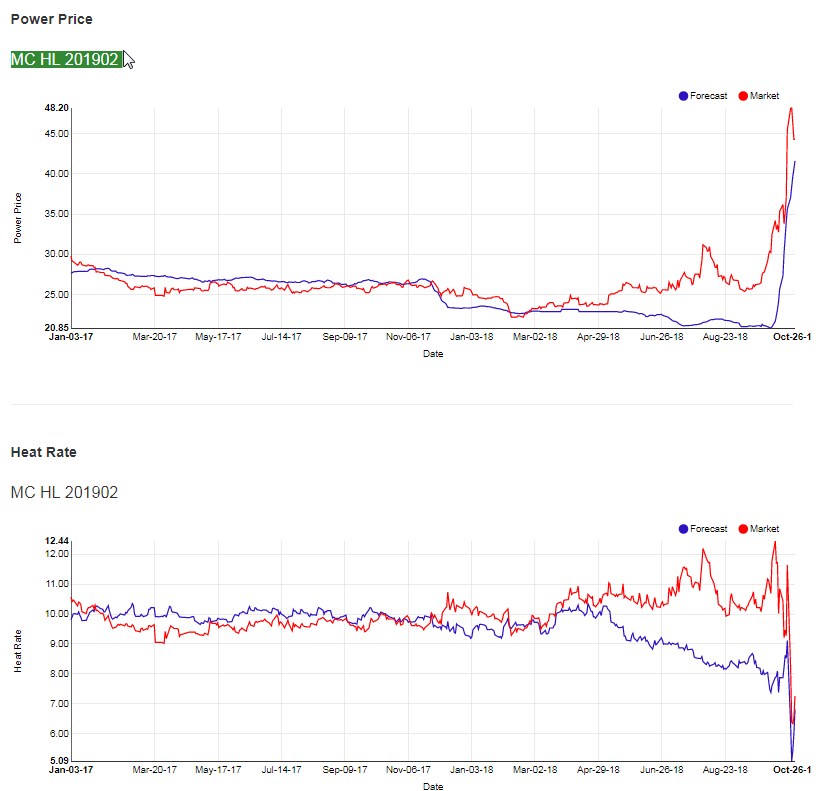 Feb rallied, then pulled back and is probably more fairly priced than not. Pass. 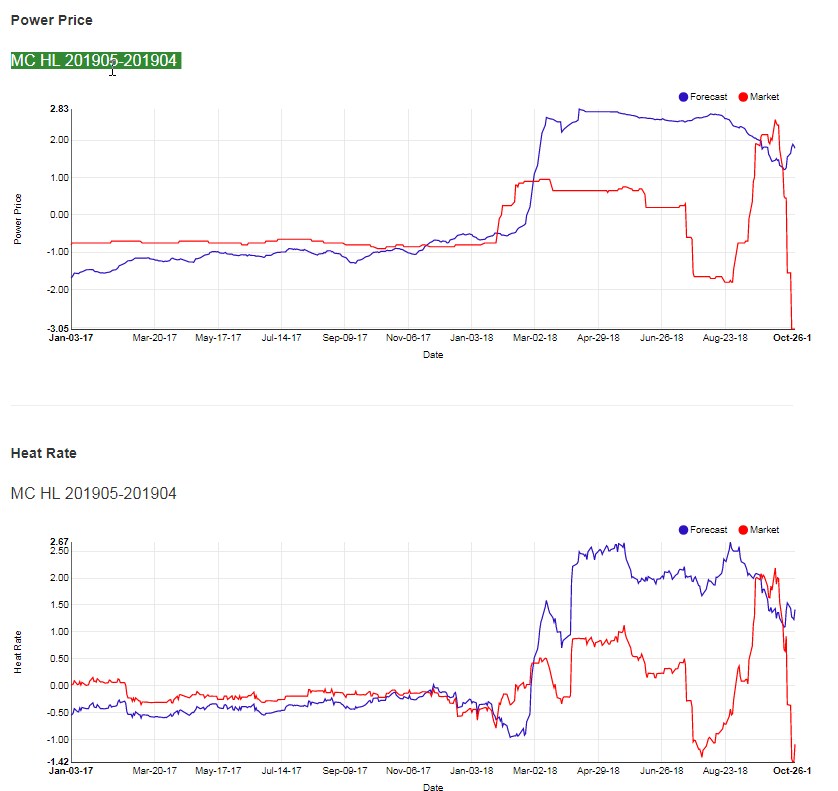 Now our dander is up; this is the May-April roll at MidC and has taken a wild $6.00 ride over the last couple of months; now it has ridden itself into an ultra-cheap price. Both the heat rate and the power price are at contract lows and this is going to be almost a pure water play; gas won’t figure into the equation unless Enbridge blows up another pipe. Assuming they don’t, then are you really that comfortable calling the snow melt for April/May in October? I mean really, there isn’t even any snow to melt …yet. We’d buy this all day long. 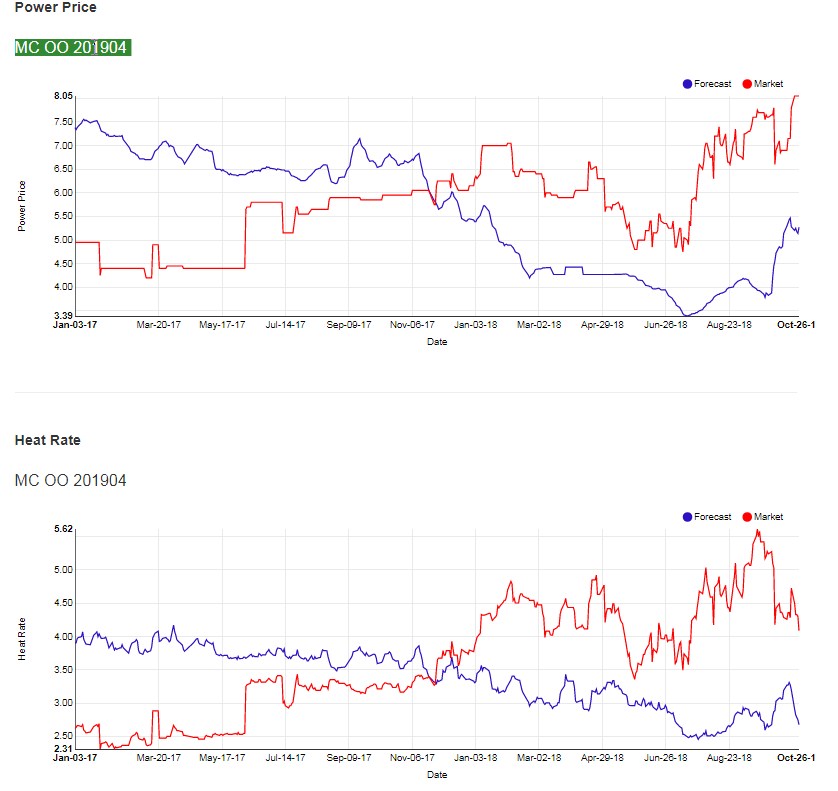 This is the April MidC on/off and just posted contract highs. April is a water play, we already said that but it remains true, and we (nor you) have a clue about what April water will look like. As such, and given that it is October, we fade highs and lows until we have more certainty, and today we have only uncertainty.  Sell it. 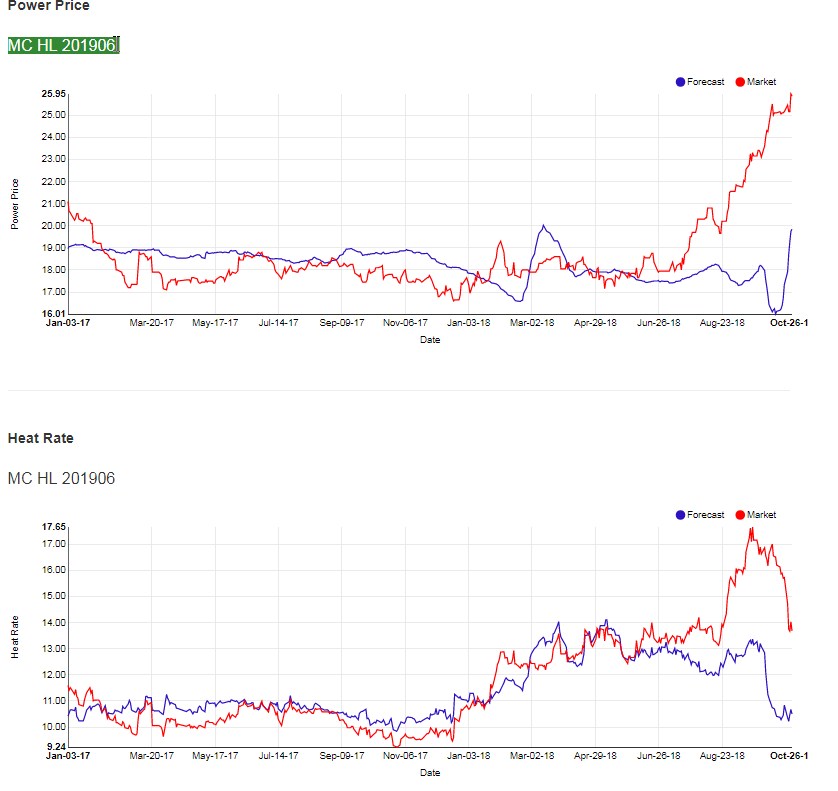 I’d rather execute a derivative than an outright given that there may be rolling blackouts in the MidC; all ships rise with the flood tide, even ones that are already riding high like the June MidC. Remember, the Enbridge fiasco should be in the history books my mid-March; this is June. Just not sure I’d be taking a big directional position today —- PASS. 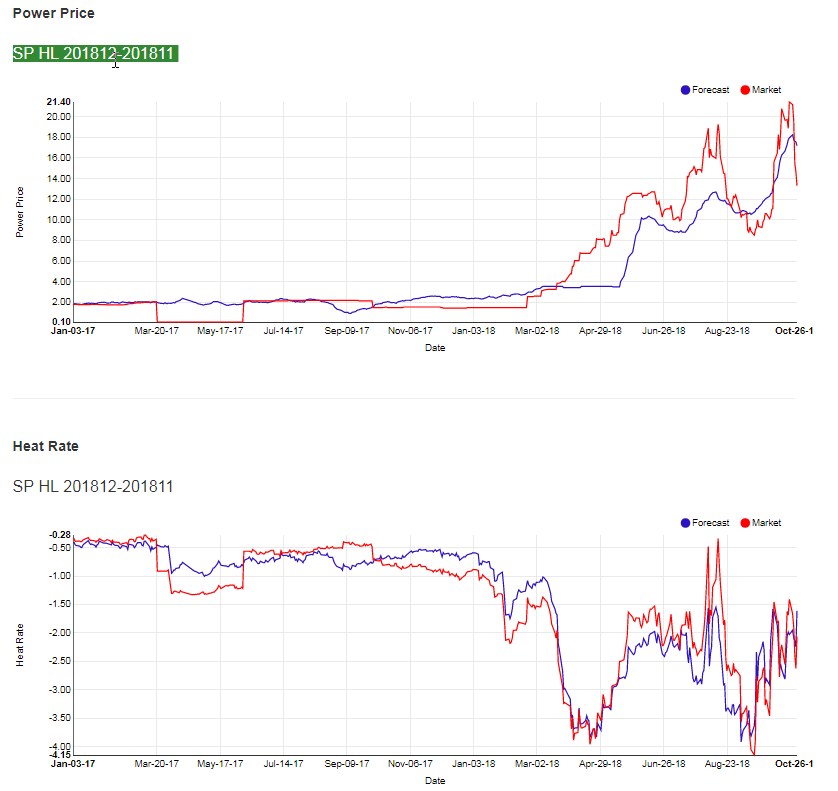 SP Dec-Novy, and it tanked last week; I’d buy it given the very warm first ten days of November. Citygate won’t blow out if Sendout is less than 3 BCF and there isn’t a snowball’s chance in LA of that happening when Burbank is in the 70s. 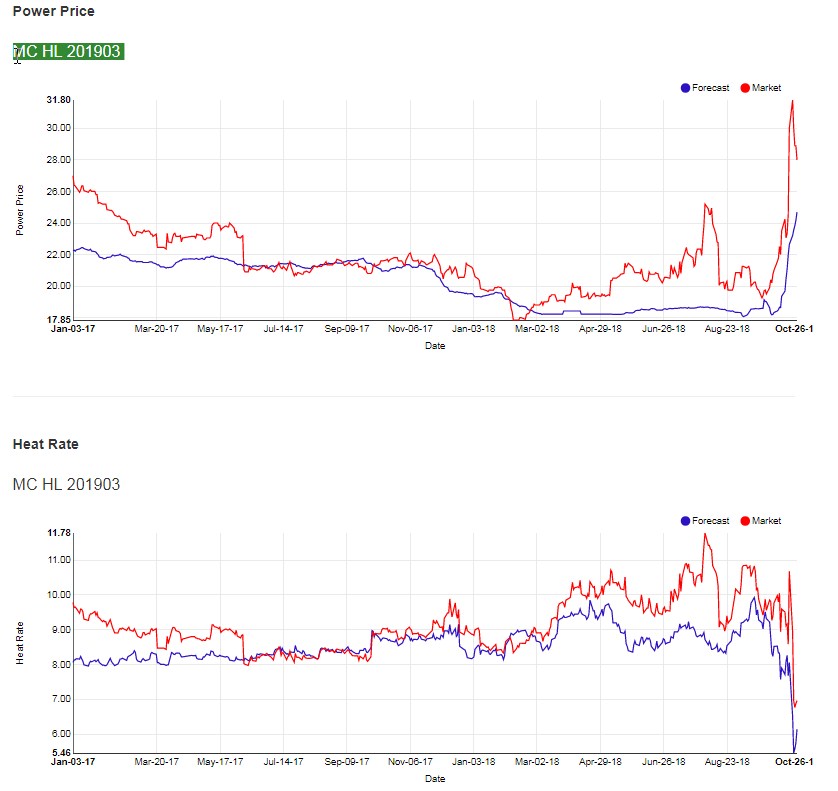 March is rich but we’d be nervous about outright shorts and will pass. 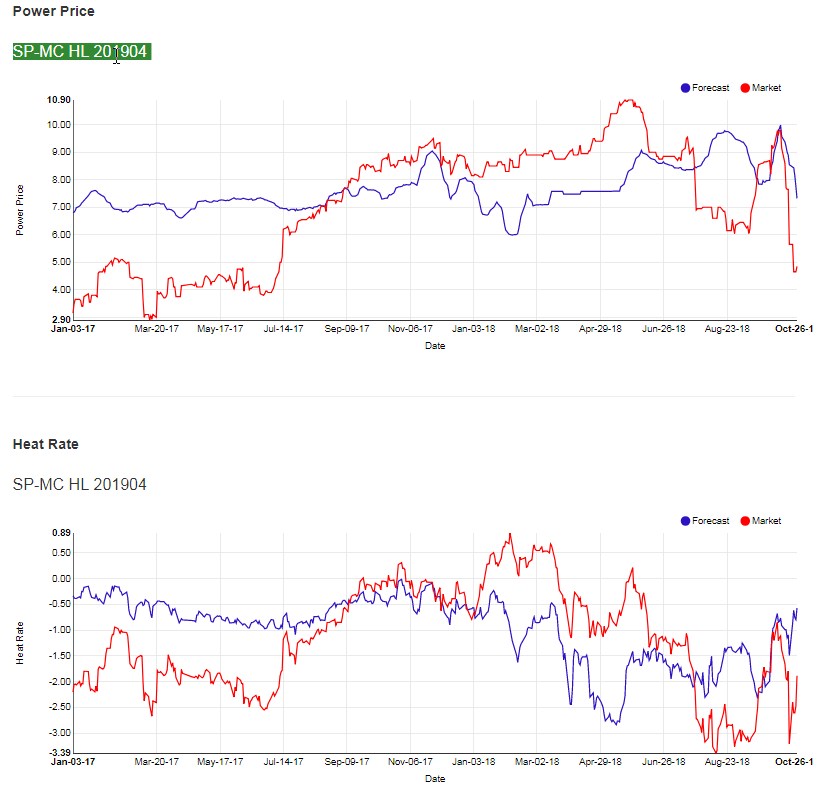 This is the spread between SP and MidC in April and is dirt cheap. Since April is beyond the Sumas Situation and we know nada about water we would have no choice but to load up on this spread. The risk, of course, is that MidC clears $1000 in cash at some point and everything ralllies. 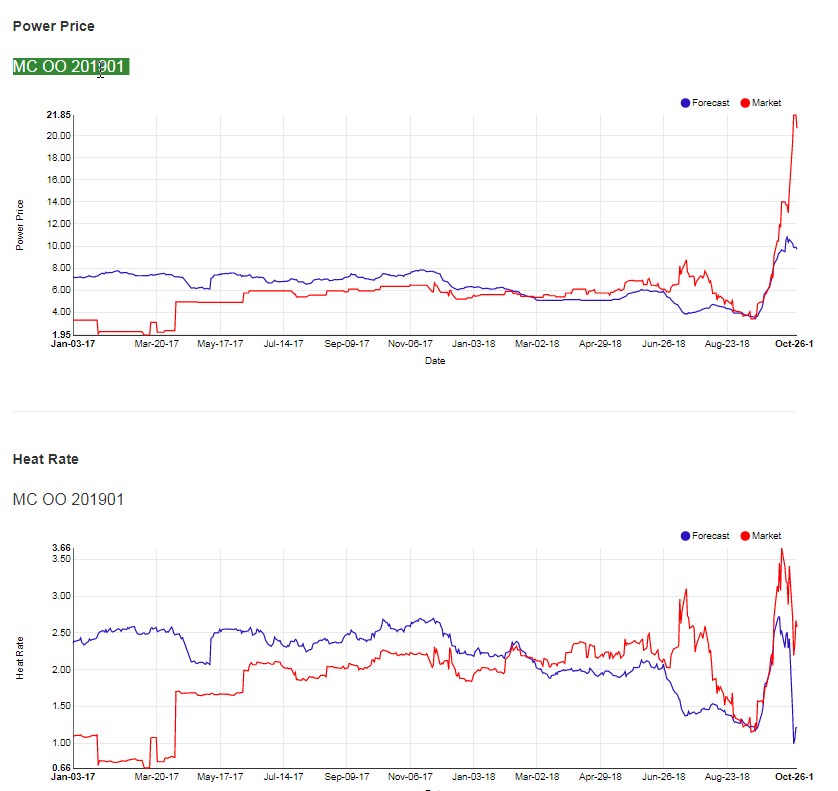 Same risk here, the Jan On: off at MidC; now a contract high and the forecast isn’t budging, in fact, the heat rate forecast is tanking. Without cold weather, this is massively over priced, especially given the weak snow build year-to-date; water will be tight, LL will be strong relative to HL. BUY but watch the weather!