Let’s begin with the weather … 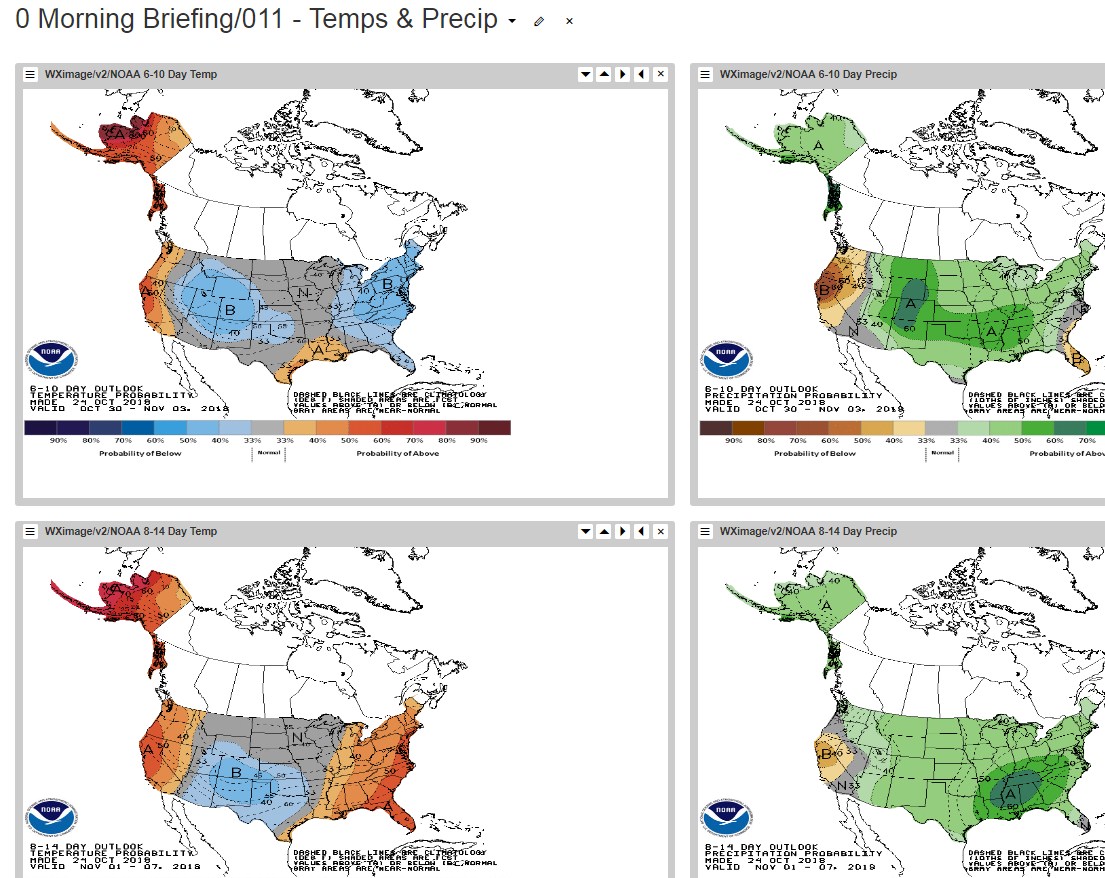 Bullish in the south, LA remains well-above normal, while the north is dry and warm. Warm is great for MidC, gas demand remains low, but the dry is problematic as the Northwest turns to water to solve its Sumas problems. Reservoirs will be pulled; Mica is already 2.5 MAF below average. Meanwhile, the markets are priced for disaster …

Dec through March are well above Henry, but there is a lot more room to go. If there are delivery curtailments, especially to the retail side, prices could approach Socal Citygate levels –

After all, what is the price of not serving retail load? In LA, they said it was $39.00 last summer, what will they say in the Northwest? Of course, not serving load only happens if demand exceeds supply and will that even happen?

Can the system squeeze out another 1 BCF of supply from today’s levels? Because that is what will be needed just to serve gas loads; on that same cold day power demand will soar:

In the past, peak winter demand has been 10,000 MW higher than today’s loads. Unlike Socal Citygate this past summer, where there was no heating load, the Northwest’s problem is coincidental peak power and gas demand. Jackson Prairie can pull nearly 1 BCF which may be enough to meet all the Northwest’s demand, as long as that demand isn’t too persistent.

The wildcard will be hydro; how much will be generated this winter?

That’s kind of what the Term MidC markets are doing; all winter bullets have gapped, though a pullback was seen over the last couple of days. Even the back of this water year is rallying, the period beyond the Sumas outage.

That rally can only be explained by the current draught, but its way too early to call a water year, so we can only conclude that those April-August rallies are probably over-priced and mistakes. 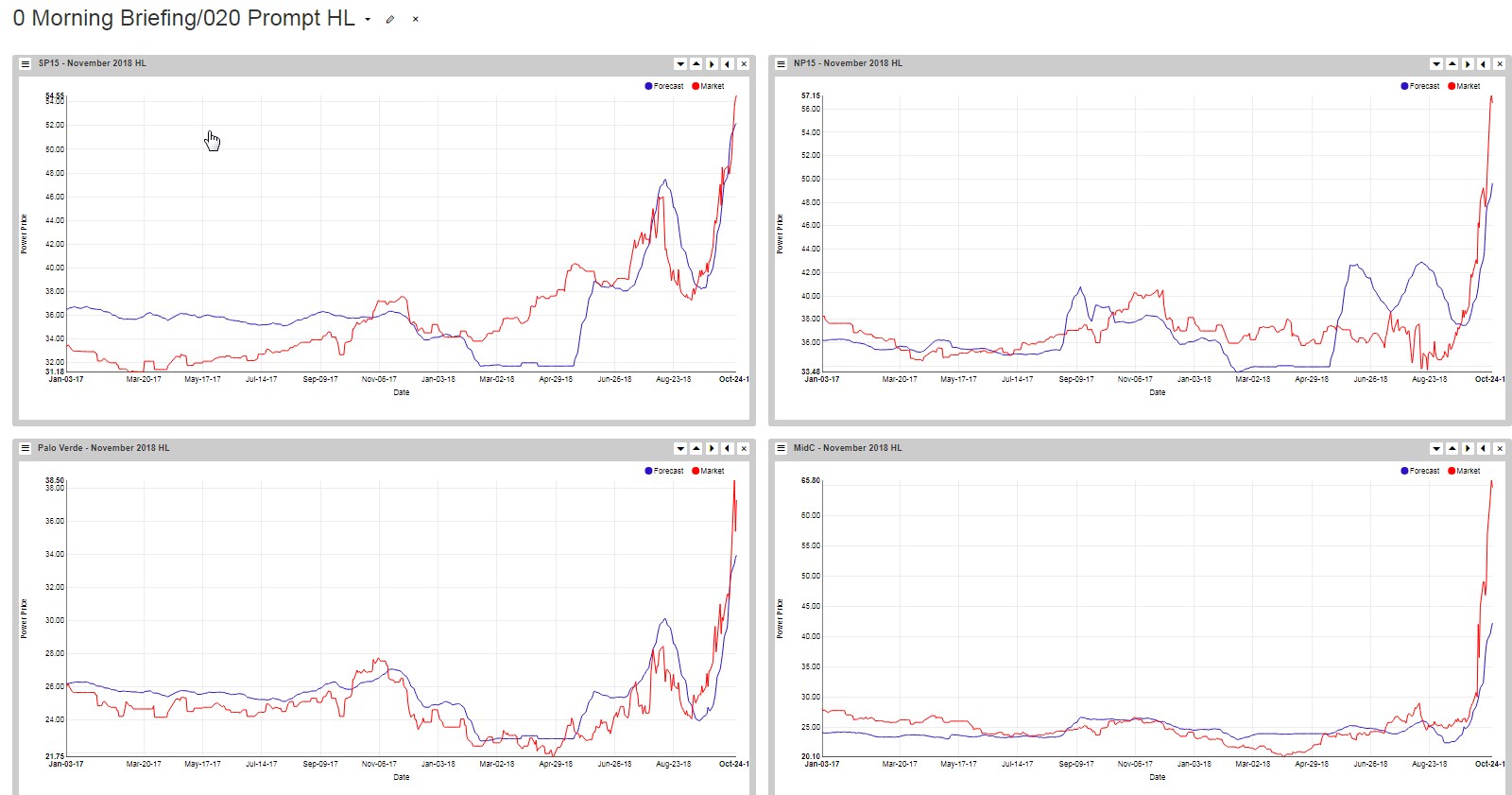 And it’s not just the MidC that is rallying; all hubs are up in Prompt, so is LL: 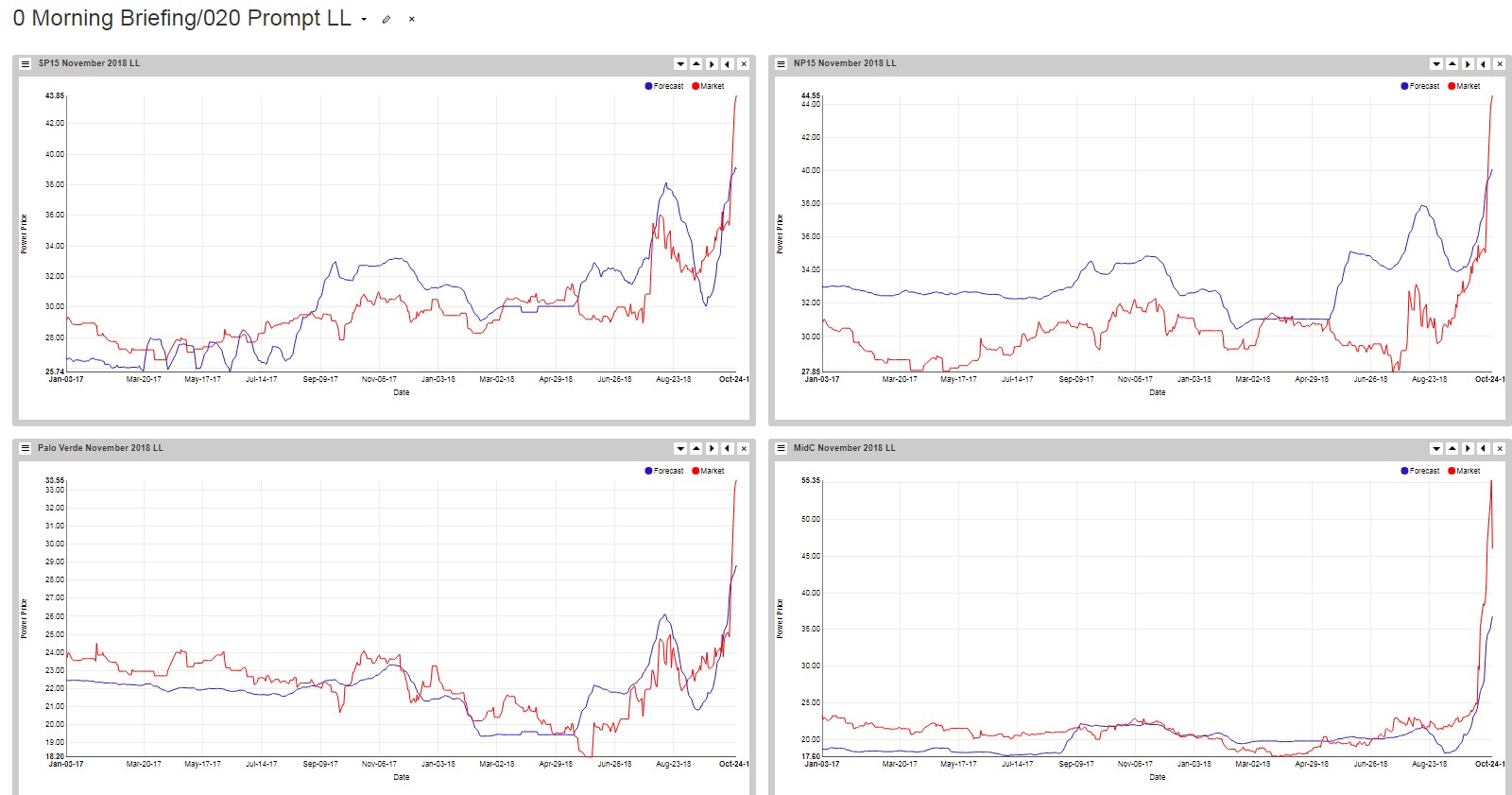 So are LMPs, but not much… 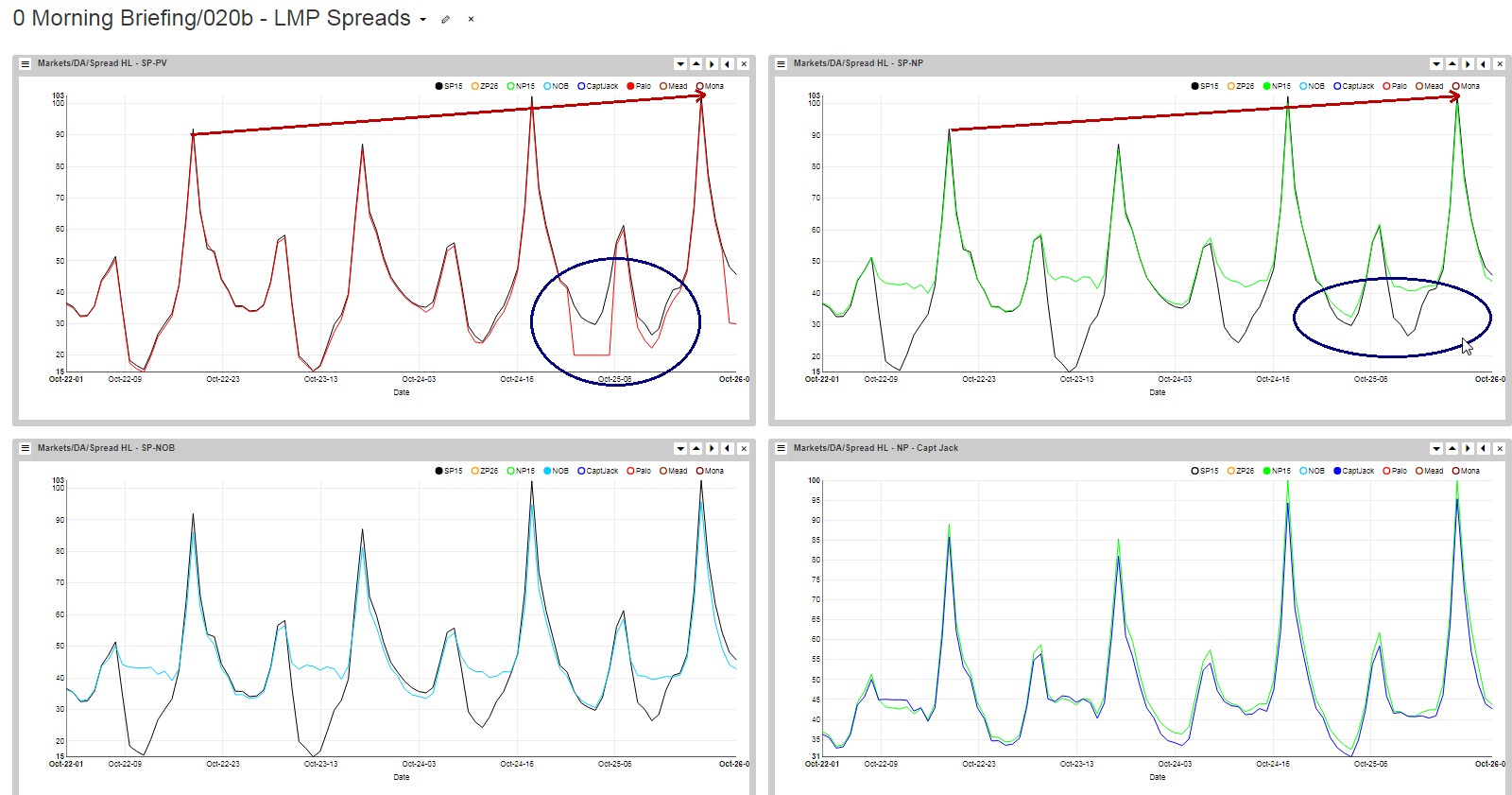 SP is congesting in the solar ramp but not as much as a week earlier, and there is little to no congestion between COB and NP.

Spot gas is odd; check out the PG&E Citygate spread to Malin or even to Kingsgate. Either those are bad marks or this is a bad market. Clearly, the Sumas fear has spread to GTNW, at least the northwest leg.

On an aside, we thought these deliveries at the Transwestern Topock tie to Socal’s system odd. The last time gas flowed there was during the summer crisis, but it has delivered gas the last couple of days. 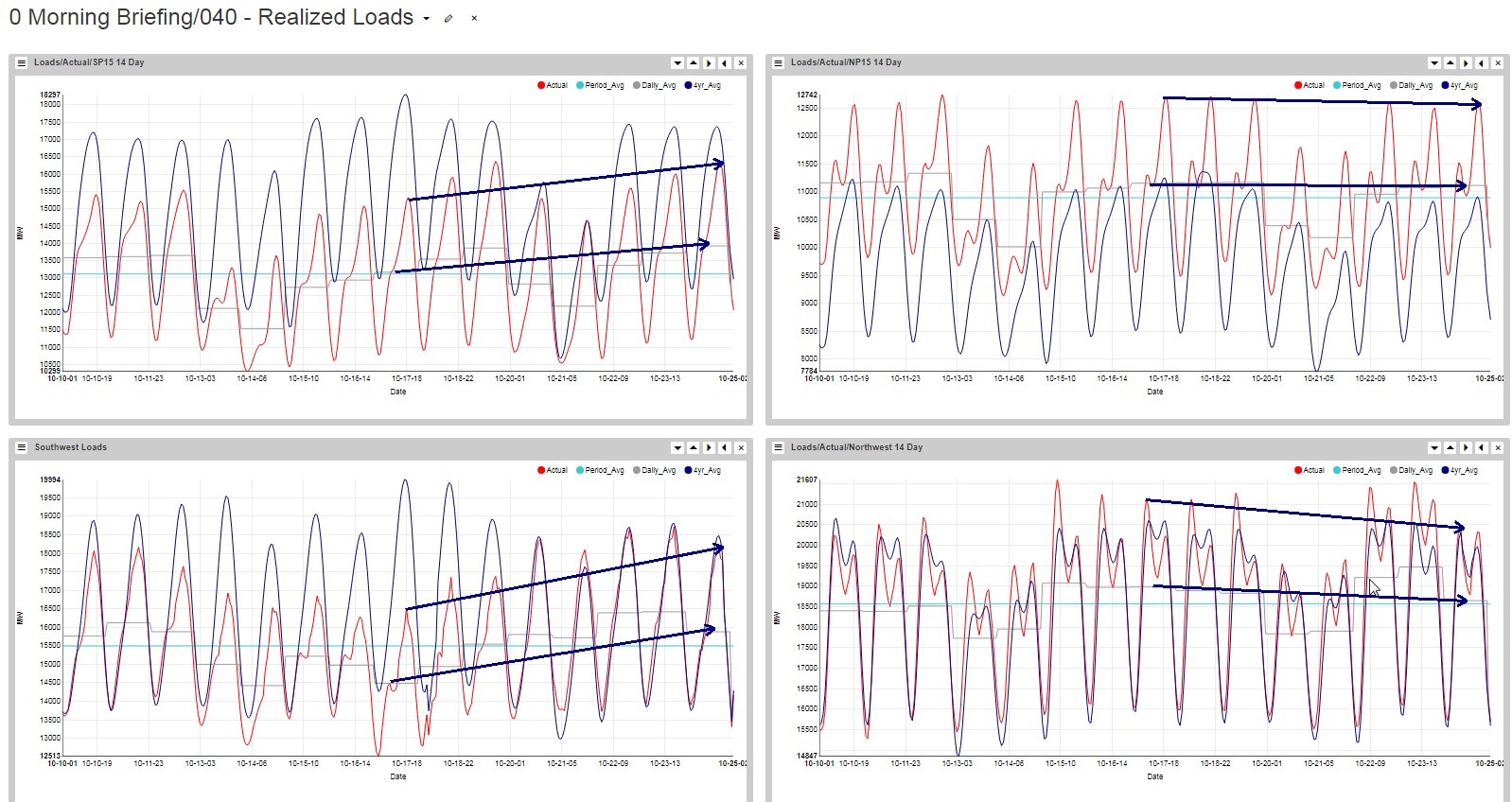 Southern WECC loads are up while the MidC’s are off and NP’s are flat.

Looking ahead, LA gets some more heat and will boast the 90s for a few days, it might even set a 10-year high, but then its back to normal, except for a few days where temps plunge. Seattle and Portland’s max temps are just falling. But it isn’t max we care about at MidC …

The Minimum temperatures are our focus, and those are not that minimum, these are closer to the maximum-minimum than the minimum minimum … all clear on that?

These are realized temperatures, and we highlighted the October degree day anomalies at Burbank and Phoenix; this was the year the Santa Anas stayed in the Santa Anas. 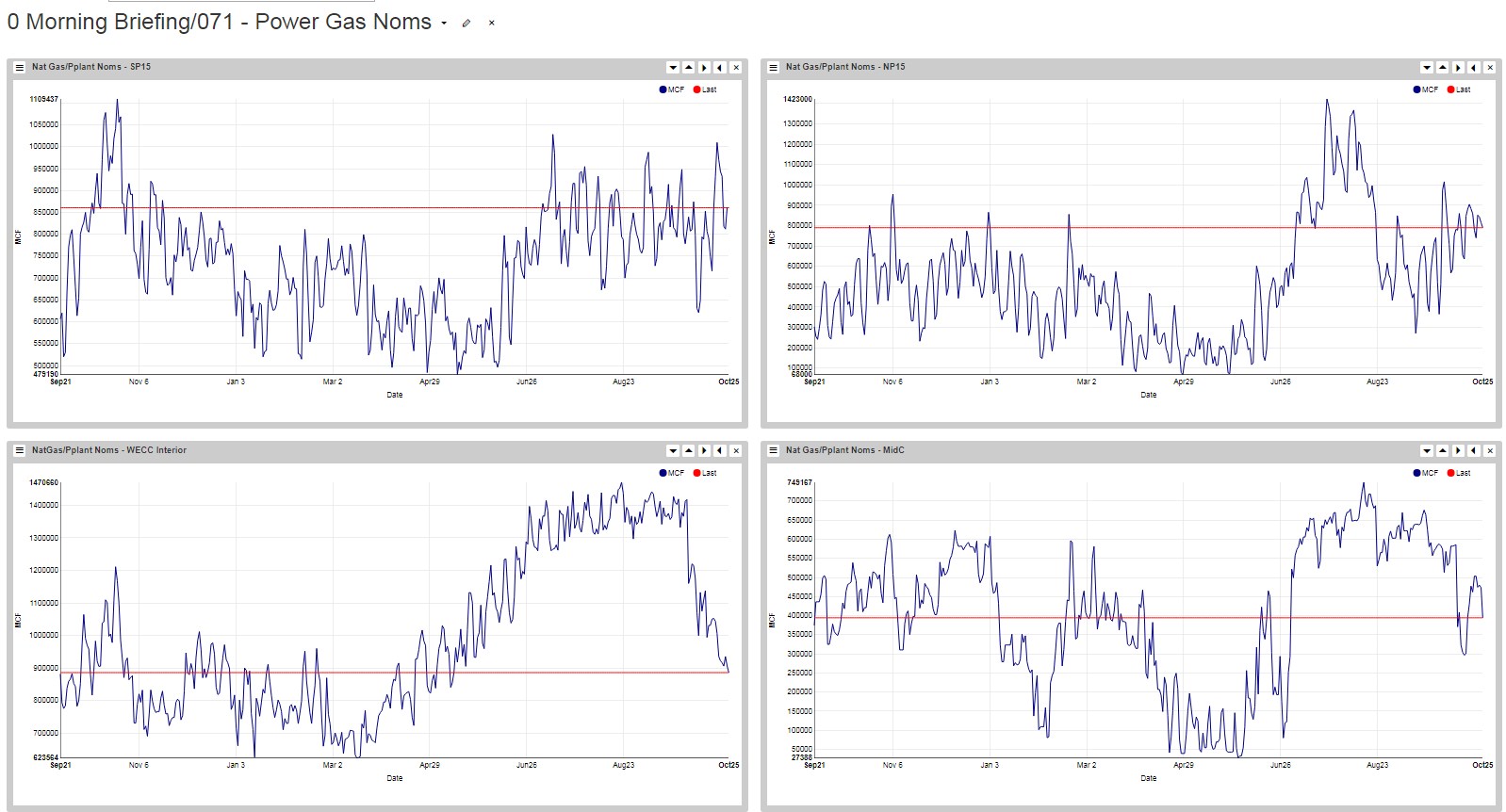 Gas nominations for power plants are strong in the ISO and less so at Palo and MidC.

Lots of new outages in SP, less so at NP. 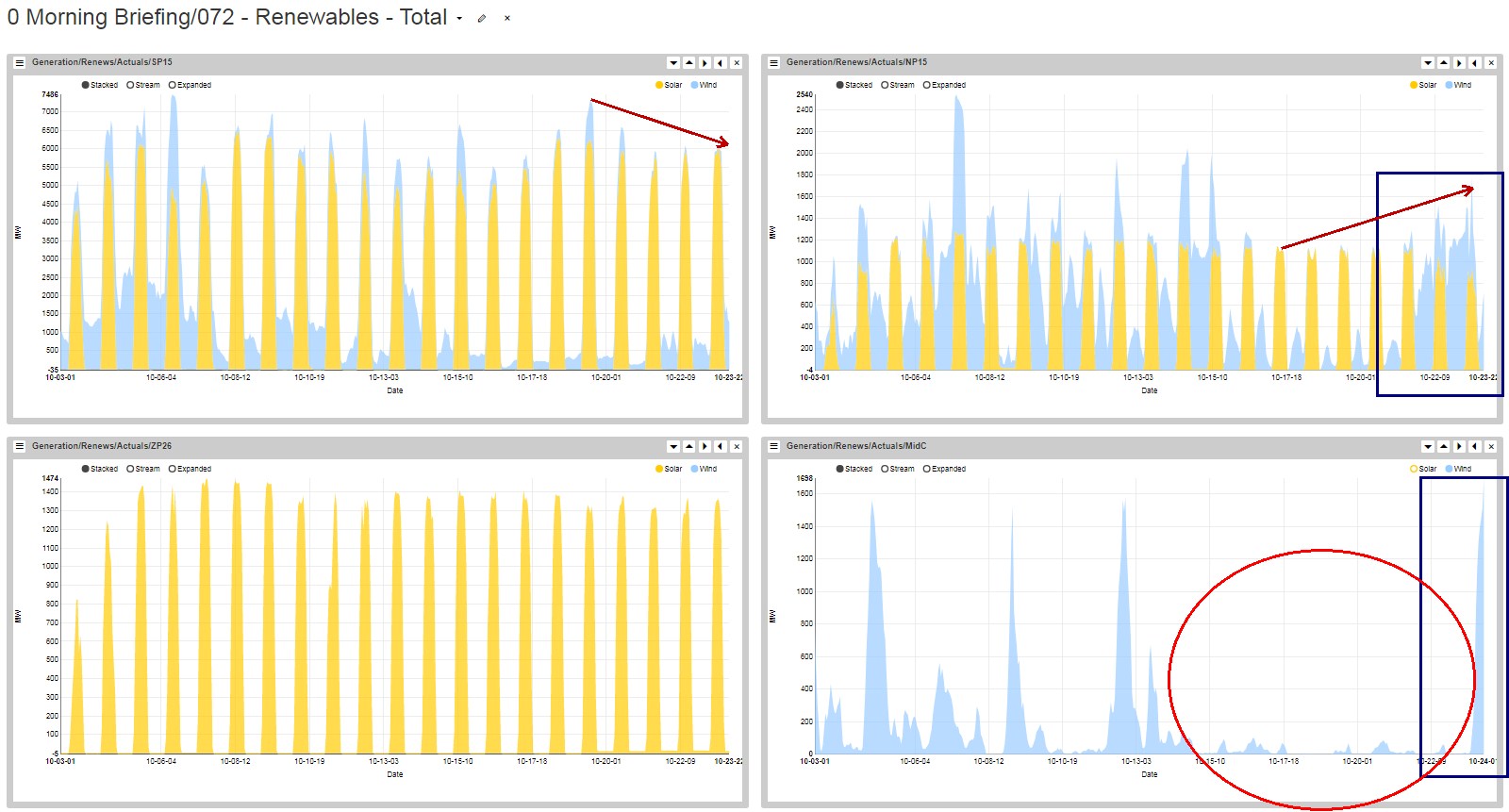 The MidC finally saw a gust of wind, for an hour or two. In fact, this week, #43, has realized the second lowest wind plant factor in eleven years:

The above is from our new “BPA” report that compiles actuals – this is the weekly aggregation version. A couple of 2018 highlights: 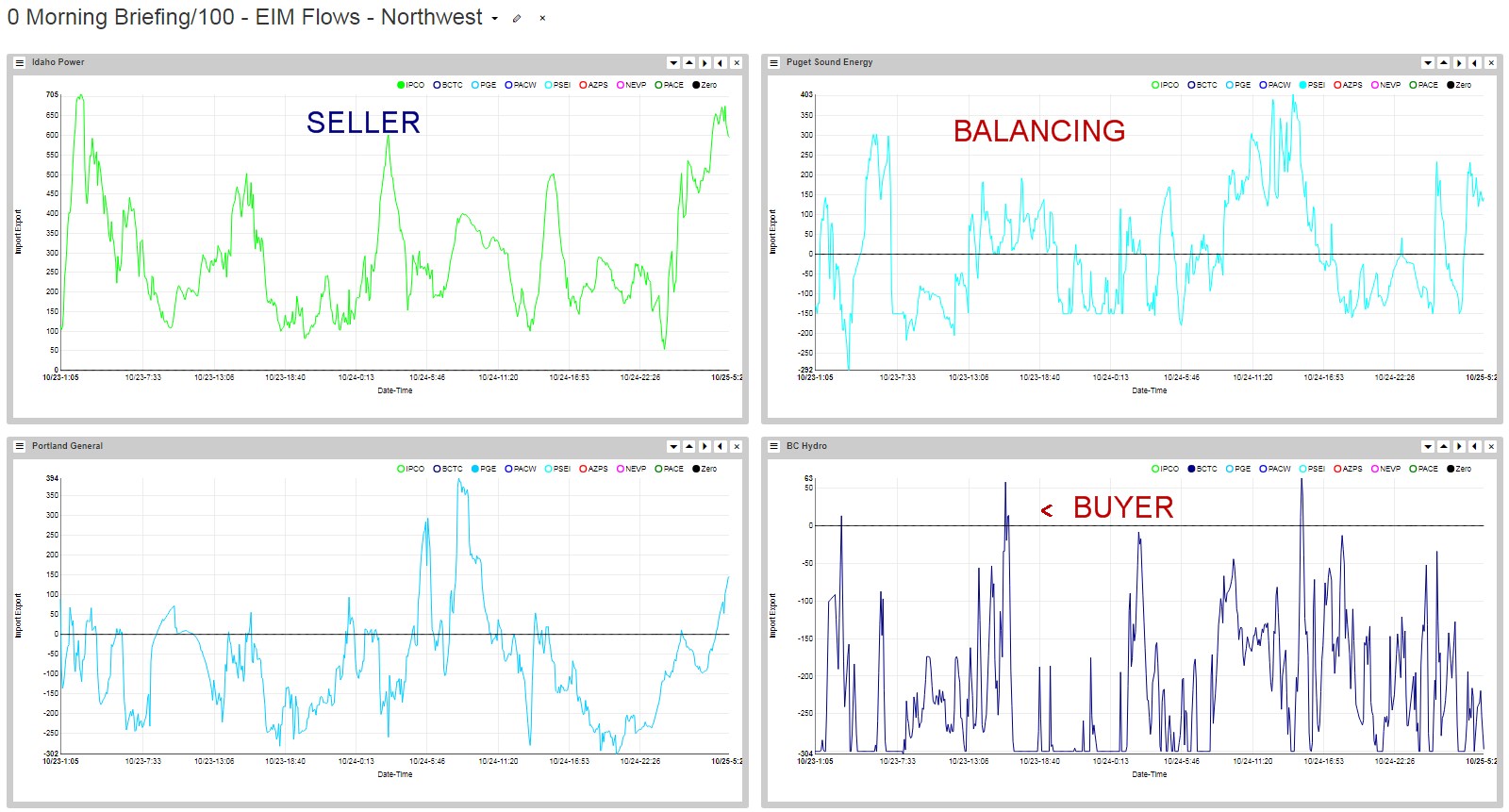 We also noticed Powerex has been a net buyer in its EIM nearly every hour while Idaho sold every hour and Puget and Portland are more balancers.

The northwest is going to grow wetter; not a lot but not zero, either. Perhaps the dry trend has broken?

Flows at Arrow are sharply up which has driven the Columbia River flows at the border to ten-year highs for this week. Merely a reflection of the Sumas issue and not being able to run those NWP Sumas power plants. 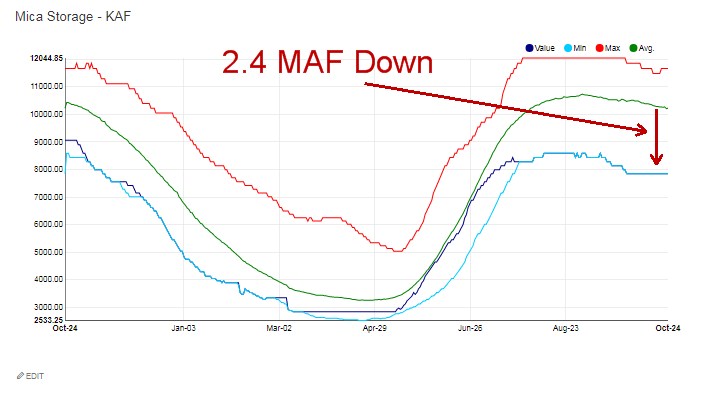 We mentioned that Mica’s storage was 2.4 MAF below average which has nothing to do with Sumas; this was BPA drafting to meet summer loads. Now it has a hole in its Treaty water heading into potentially the most disastrous winter in its history.  Ooops. 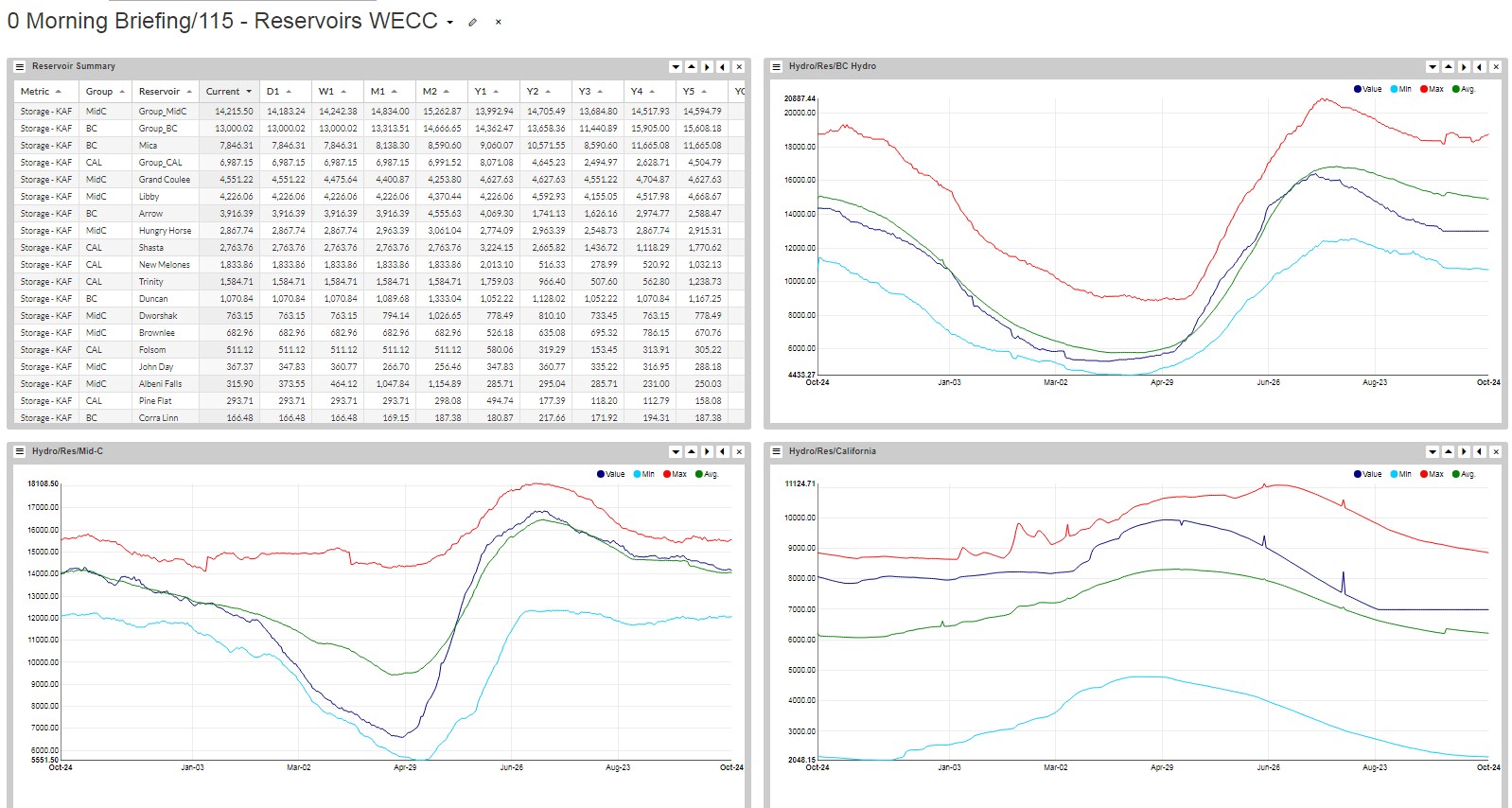 Its own reservoirs are fine; the US MidC is mostly at average levels, the drawdowns were all at BC while Kally res’s are slightly above normal. 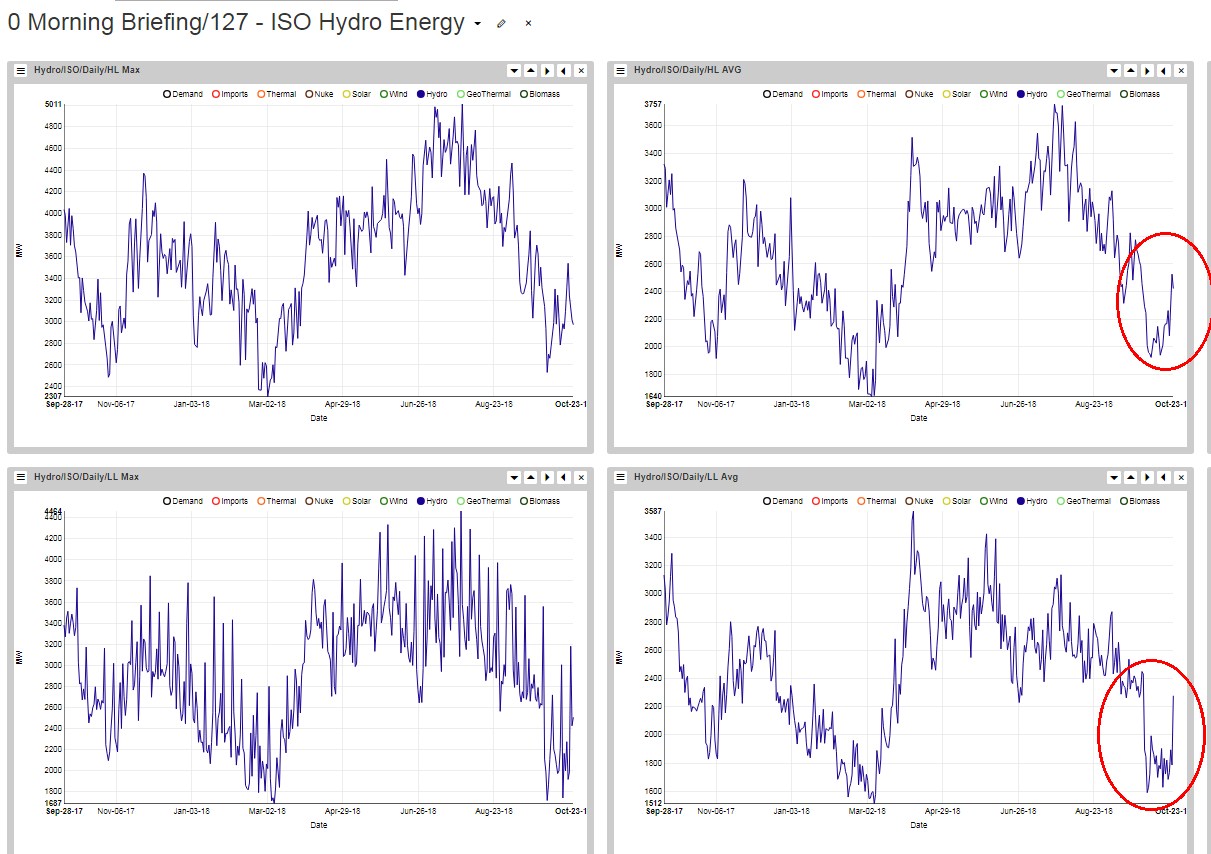 Speaking of kally, energy production has shot up; we wonder if that is in response to the lower flows on the AC? If that trend continues, its KAF surplus won’t last long. 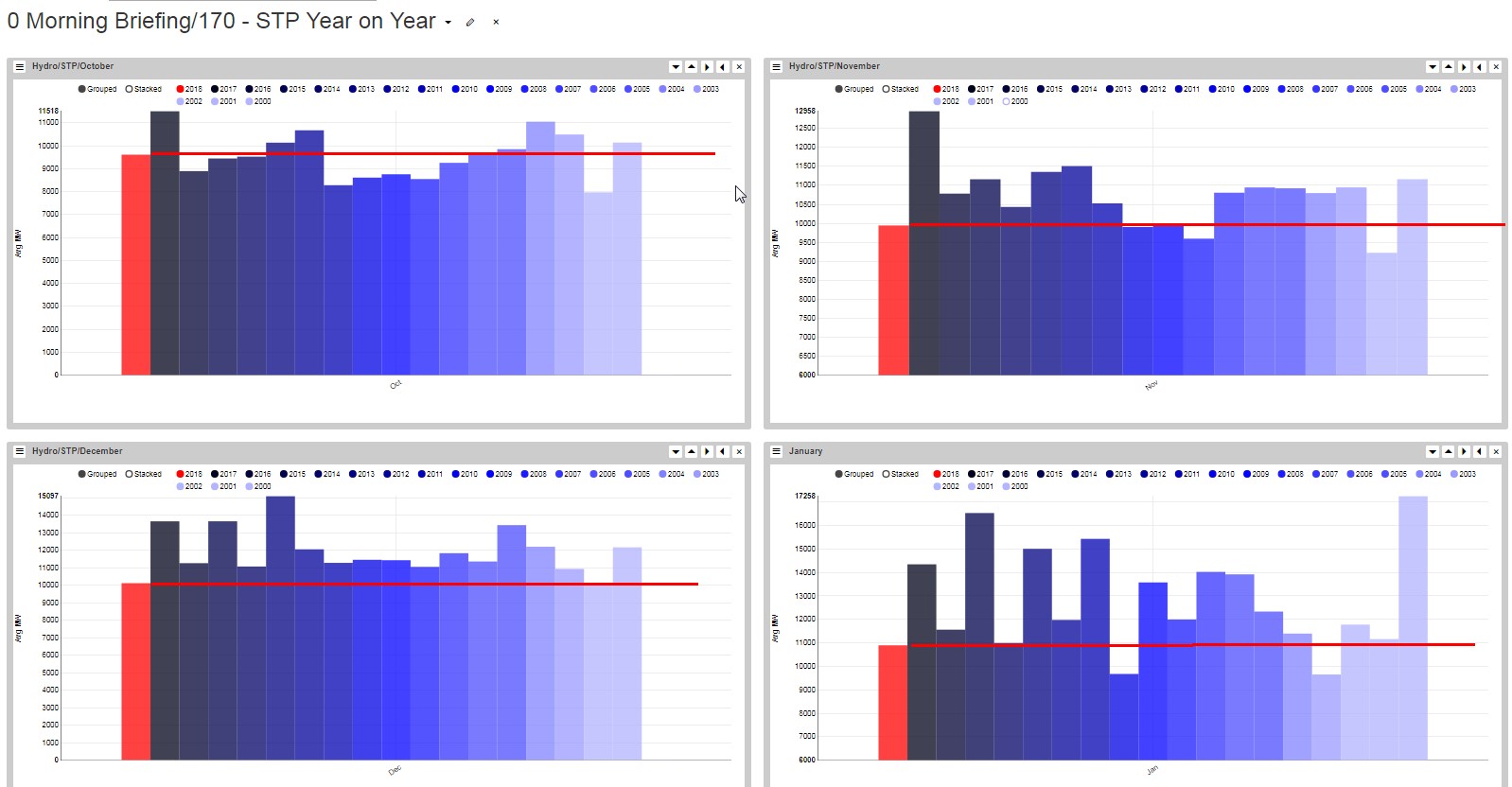 The above are 20-year plots of realized hydro energy versus last Monday’s STP. Note something odd here? Nov-Jan is either at record lows or near record lows; all the while Sumas imports WILL BE record lows.  Hhhhmmm. 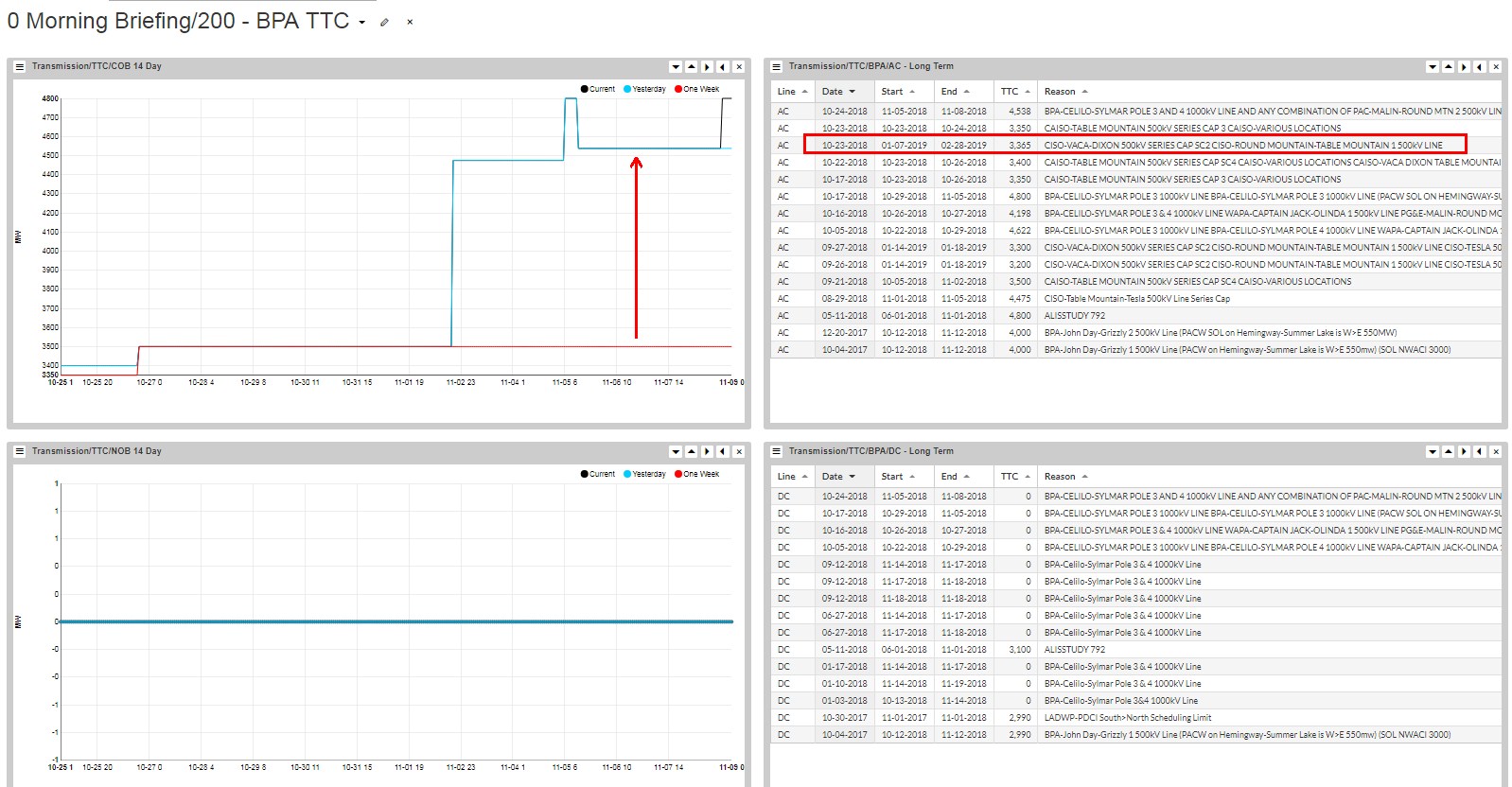 BPA jacked near-term TTC on the AC (week over week) but also added an extended derate in late Jan-Feb. We almost expected them to add another month or two of DC work; why not? One reason why not would be to return the line so the northwest can IMPORT energy from SP.

The Northern Intertie flipped directions; now the energy is flowing into Canada. All the other lines saw lower flows, and the AC remains under-utilized.

Hard to be a bear anywhere, even though loads (gas or power) are weak. Weather can turn quick, especially this time of year, and where Seattle and Portland bask in the 70s today, they could be shivering in the 30s in a few weeks. The instant the NWS posts that forecast, all of these MidC bullets (and the ISO’s, too) will scream up. We just couldn’t afford to take that risk and would remain modestly long in winter.