We got increases across the board in this week’s update, but the real news shows up in October where we see a massive 2,388 aMW increase, likely as a response to the pipeline explosion.  November and December show up with little more than white noise with just 84 and 53 aMW increases respectively.  January followed up last week’s sharp cut with a 263 aMW increase, though it remains far short of the forecast we saw even two weeks ago.

October’s increases run into November, at least until the 3rd, and show a week-on-week increase as high as 3,000 aMW (26th).  November early increase is immediately washed out by a sharp decrease from the 4th-8th, while the remainder of the month stayed flat week-on-week.  December showed little variance aside from the last two days of the month where a modest 200 aMW increase is shown.  January carried some of that late-December momentum through the entirety of the month, which amounted to the 263 aMW noted above.  We’ll have a decent picture of February next week, though you can see a sharp increase from what has trickled in thus far. 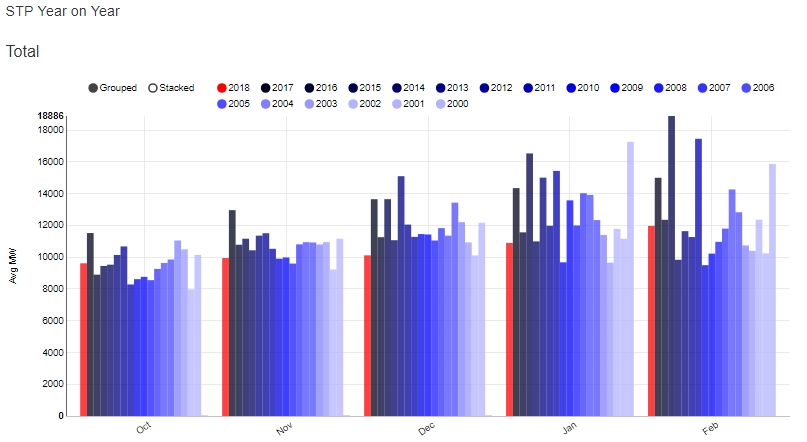 The 2,388 aMW increase to October was enough to push it ahead of the majority of observed years, a sharp contrast to last month which this year behind all others.  On the other hand, Nov-Dec continue to lag behind.