Without a doubt, the Enbridge situation is the single most important fundamental in the WECC, and its ultimate resolution remains uncertain. Here is a headline from yesterday —

A few quotes from that article …

“As the timeline for repair works on Enbridge’s ruptured gas pipeline remains uncertain, British Columbia may experience natural gas shortages for months and well into the winter,”

Weeks suggests maybe the 36″ resumes sometime in November, but at a limited capacity. Months indicates a very tight Winter in BC and the Northwest (western Oregon and Washington). For once, the east- siders of both those states can let out a collective sigh and be happy for where they live.

So when will the pipe be fixed? We’ve always been a believer in the market as the best soothsayer. Let’s see what Mr. Market thinks.

Using Henry as the base case, it looks like the market thinks Jan-Feb is when the pipe is returned, or at least the risk of blow-out prices has diminished. That more or less matches Enbridge’s statements; the market will always place a non-zero bet that the repairs take longer than expected. The great unknown is weather; when does it get cold and just how cold does it get? How much rain will the Northwest receive in the next six week? 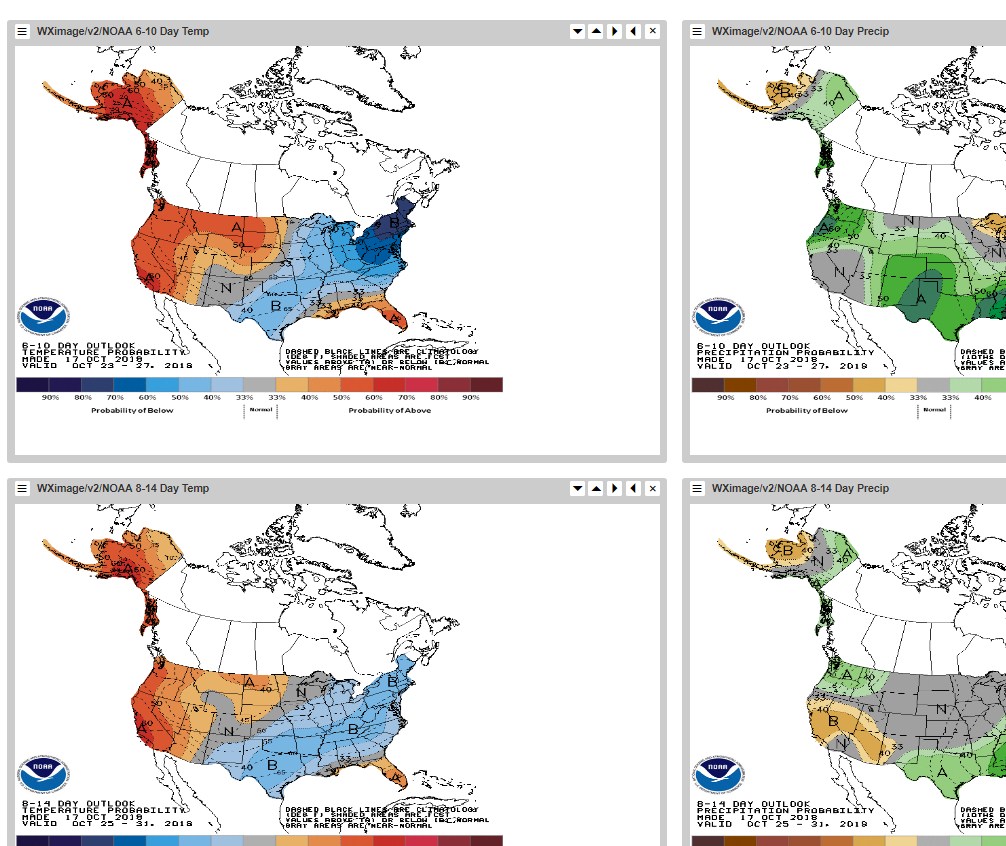 Loads at MidC will remain exceptionally weak for the next fourteen days, per NOAA, and the rains return, though the east-side is relatively dry. There isn’t enough rain in this forecast to make a difference, but the warm weather is a factor. A cold day, one where Portland drops into the 20s for a low will put an additional one bcf of Core Gas Demand onto the system, and we don’t believe there is enough gas to serve that load.

Flows at Station 4 are up 320 MMCF following the repressuring of the 30″ parallel line. More interesting is the return to service of Chehalis and Fredrickson turbines. In fact, total Northwest Pipeline gas noms for power are almost back to where they were pre-explosion. 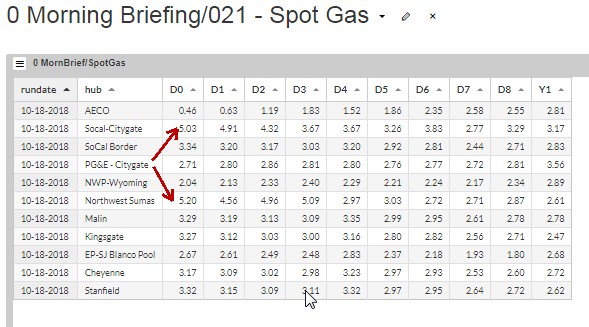 Meanwhile, Sumas spot is trading over Socal Citygate (and every other hub) on a no-load day. Just imagine where it will clear with another one bcf of gas load and 5000 MWs of power demand? 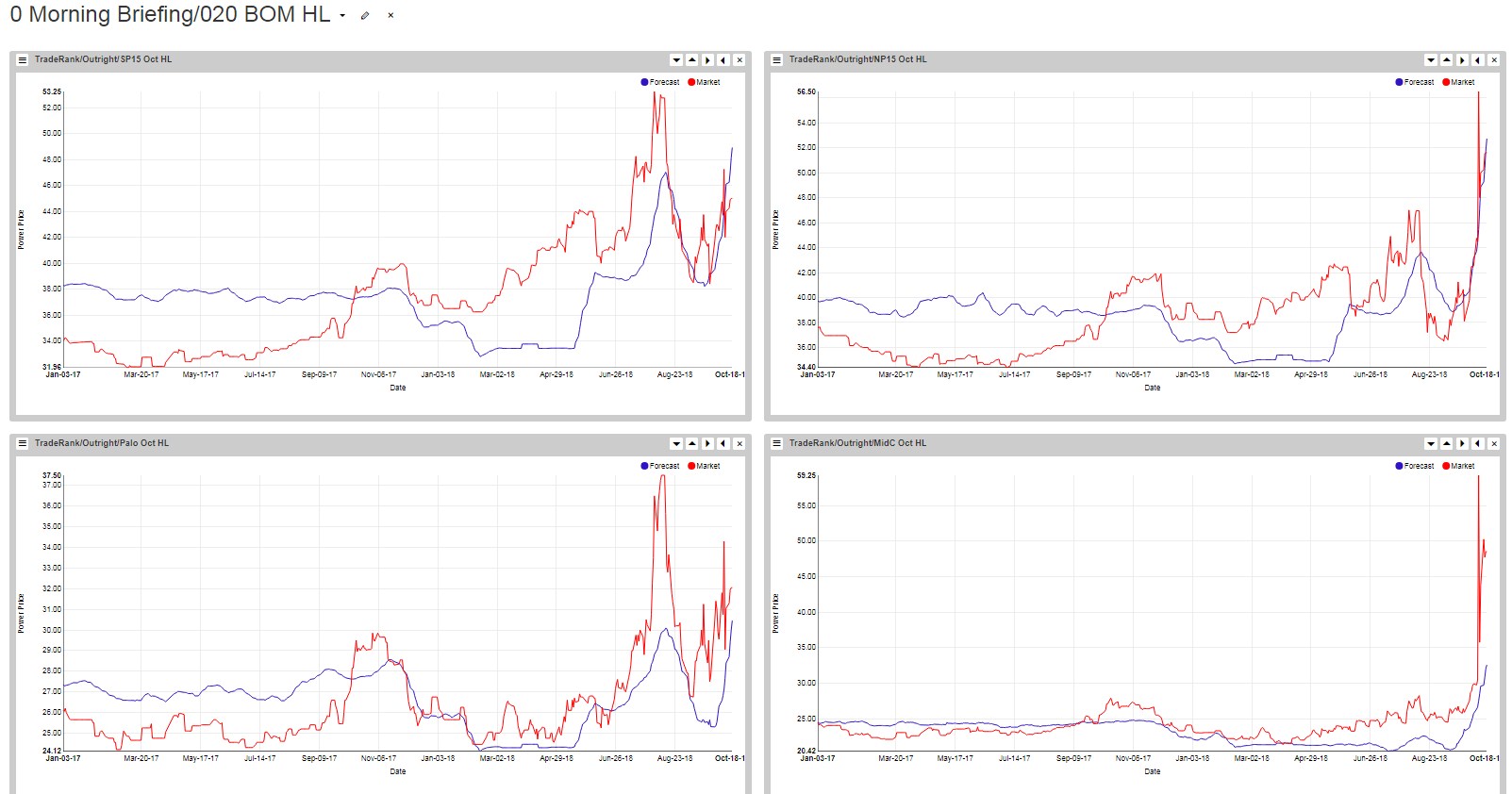 BOM’s up everywhere but the most at NP and MidC. Though NP15 is served primarily by GTNW, it may not come out of this unscathed. The Northwest typically flows about 2500 aMW to NP; that won’t happen again until the pipe is fixed. In fact, on that bitter cold Portland day (low 20s), you should expect to see 1000 flowing north, not south. Same on the DC; but the problem is that a bitter cold Portland day is most likely a frigid Sacramento day, too. Perhaps it’s a cold Burbank day. Yeah, now you get the picture. 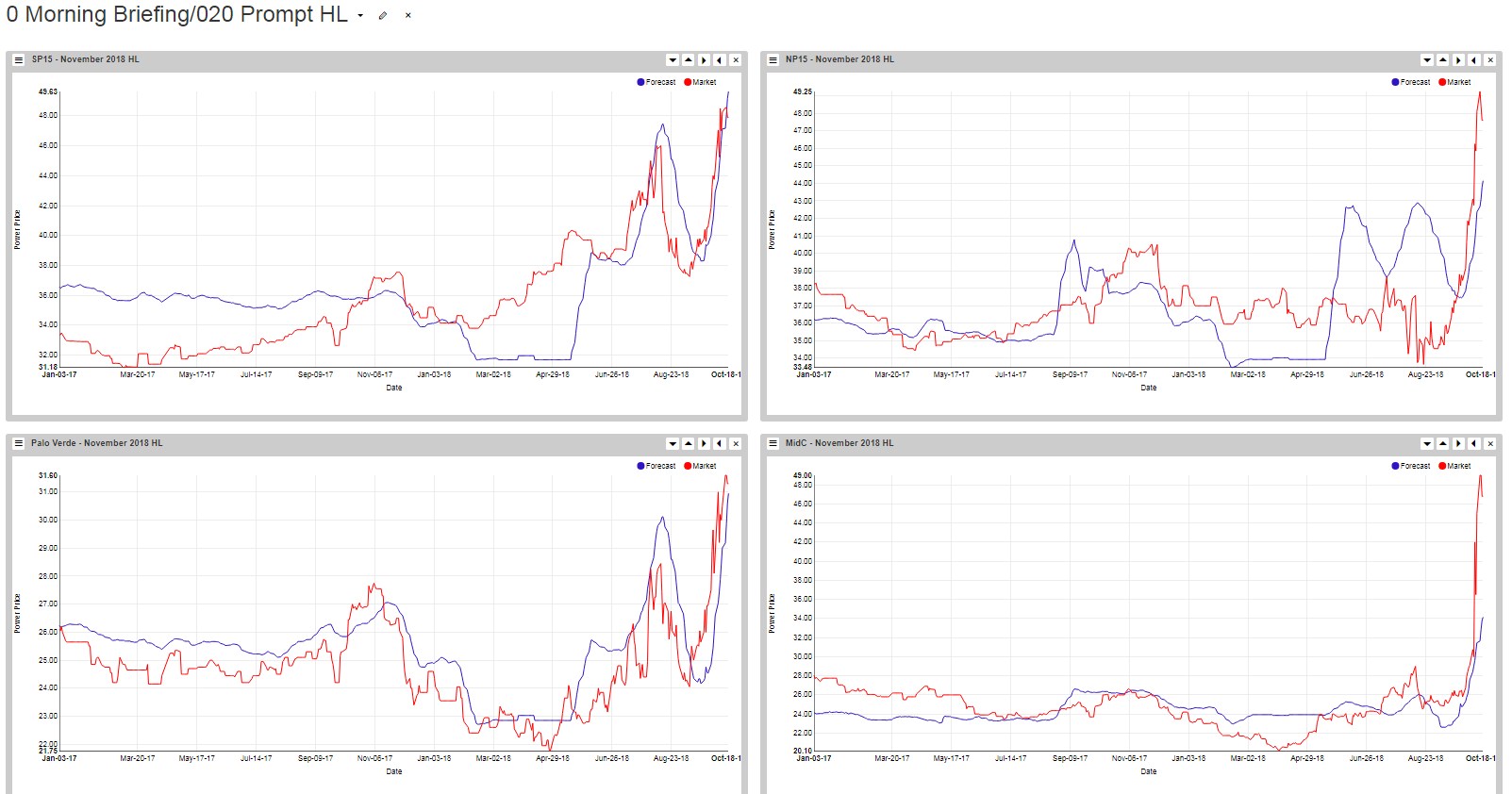 Prompt is up, too, and it should be. This is not the time to be fading and shorting; the downside could be career-ending. As long as the weather is warm, it’s hard to see how either BOM or Nov go up a whole lot more, but at the first hint of cold, these are gapping another $10-20 (or higher). Where would Sumas spot settle? Take a look at Boston and Algonquin. When they run out of gas, the price clears close to triple digits. So run a 12k heat rate at $100/mmbtu … 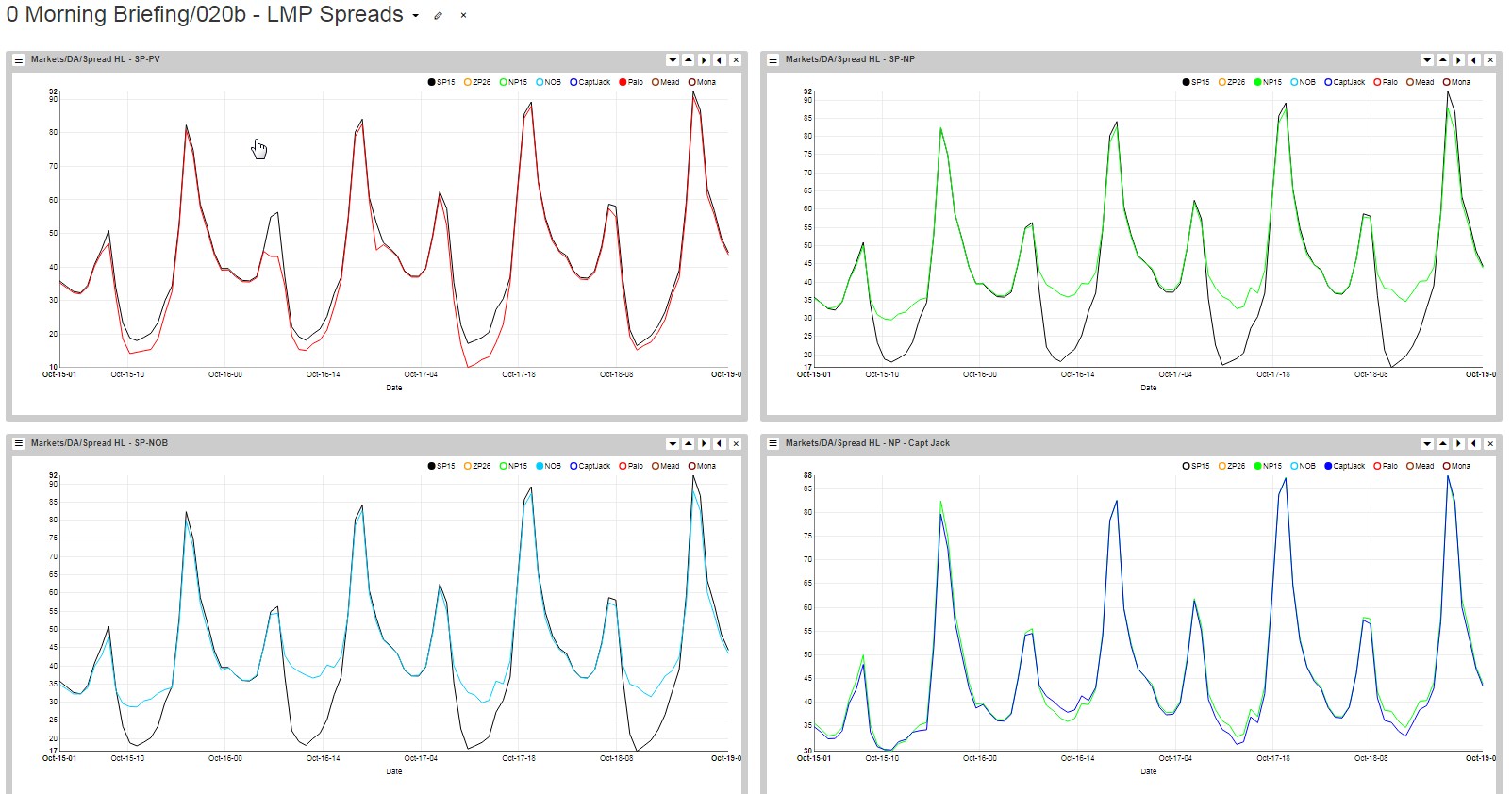 LMP spreads are quite tight, aside from SP’s solar hours.

Socal’s term gas has passed its previous contract highs, and it seems to have gotten some “Sumas” love. We scoured our reports for a reason why the Nov-Feb strips have rallied so hard and found nothing, aside from the simple fact that Sumas rallied about the same.

Power loads are either sideways (NP and SP), down (PV) or up (MidC). Also, note the dual-peak at MidC yesterday, and the highest peak is morning. The pressure on LL is going to be immense, BPA can’t play its shell game any longer. Nighttime loads are substantial and growing stronger, and there is no water. 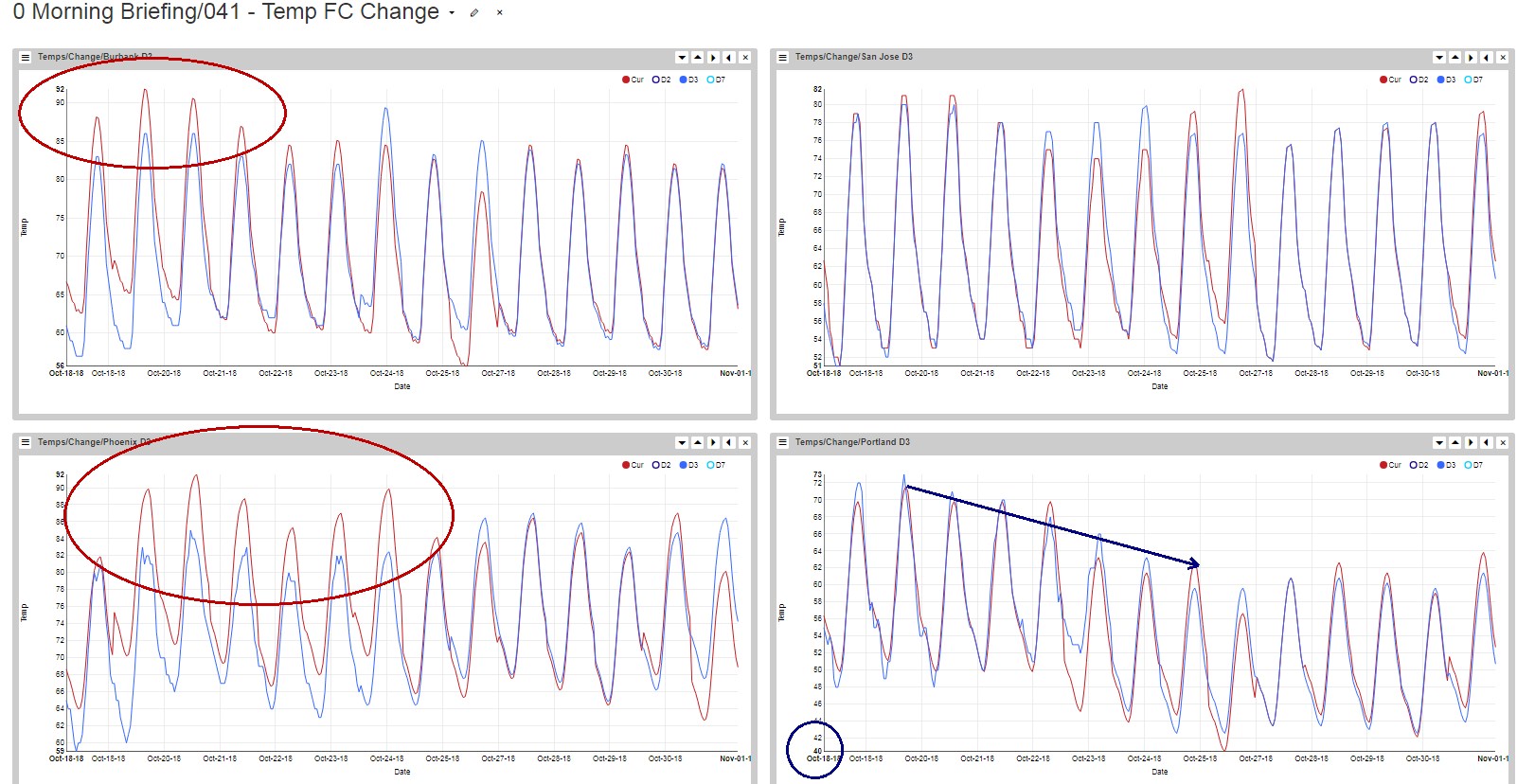 The forecasts for Burbank grew warmer; now LA is going to see the mid-90s this week. Despite NOAA’s pretty charts, the NWS is walking down Portland’s temperatures which will be walking up everyone’s loads. Now the City of Roses is projected to see lows in the low 40s. Residential gas demand, anyone? 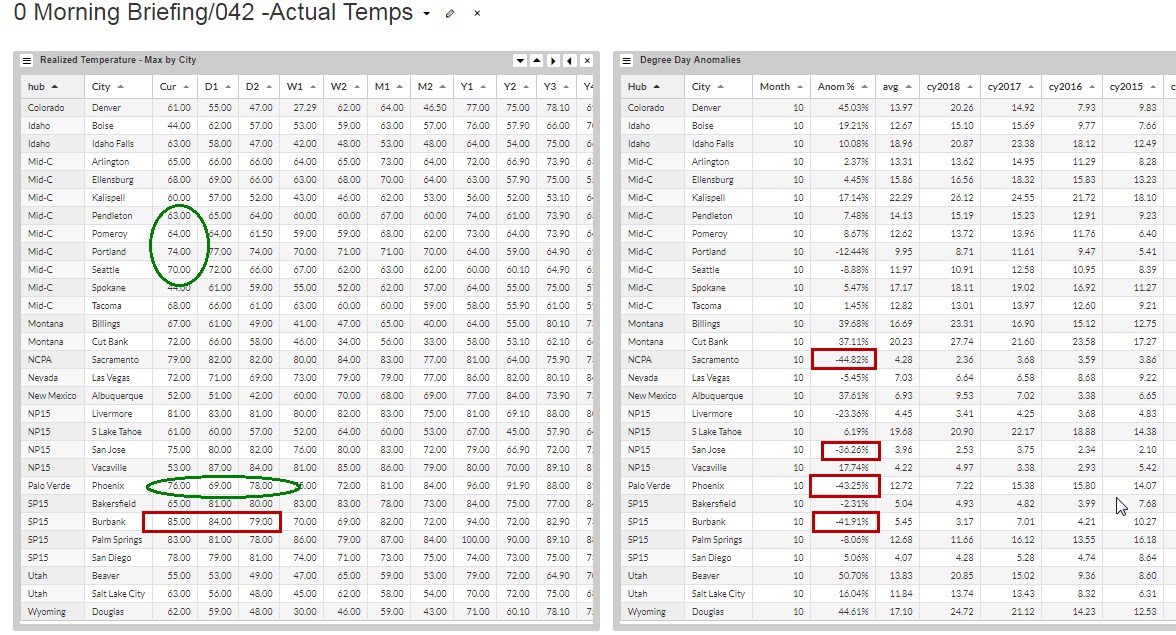 This was interesting. Burbank was warmer than Phoenix, and note the large, and negative degree day anomalies realized month-to-date in the WECC. 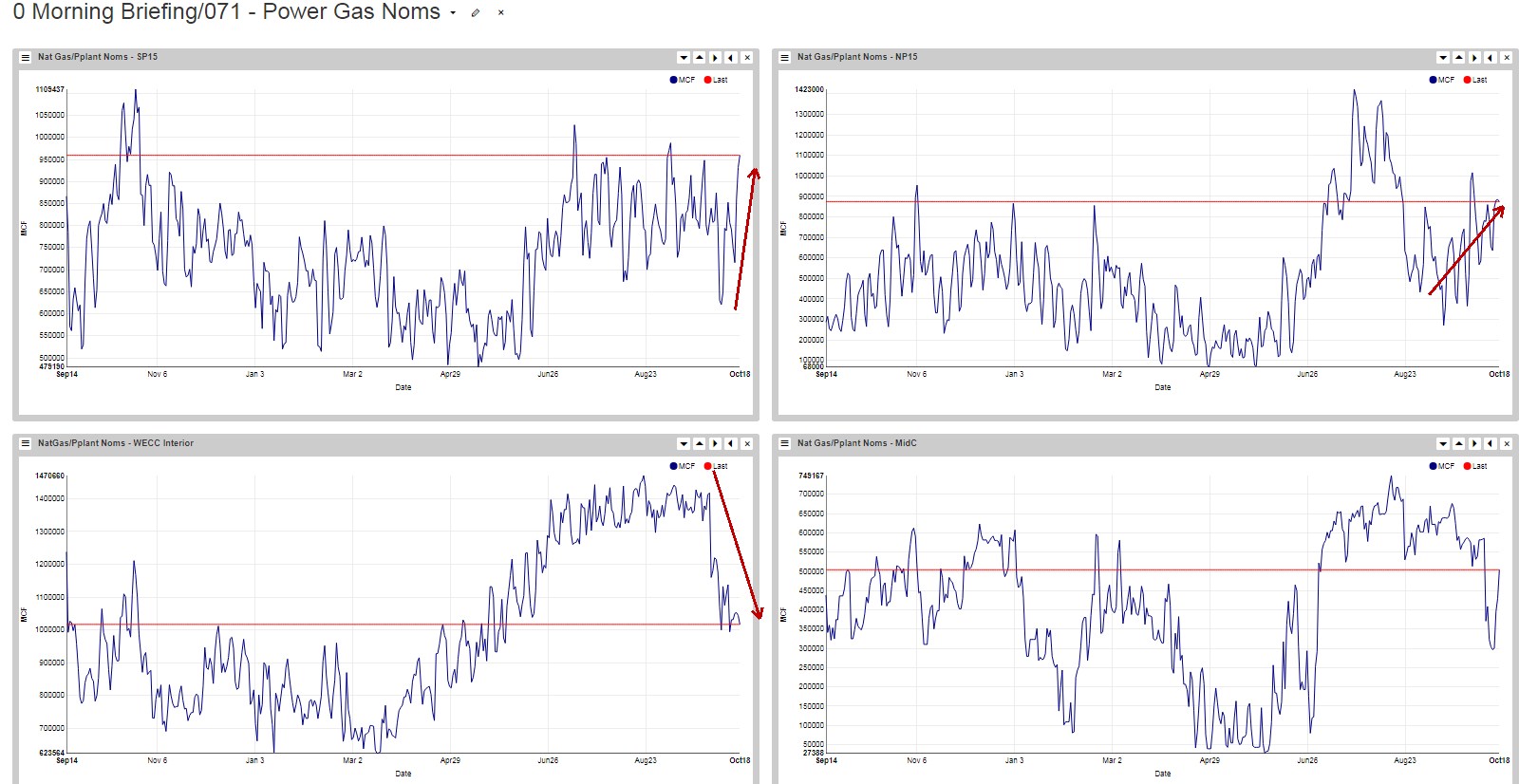 PV noms crater, SP’s rally as do NPs, and MidC’s recover back to pre-explosion levels. 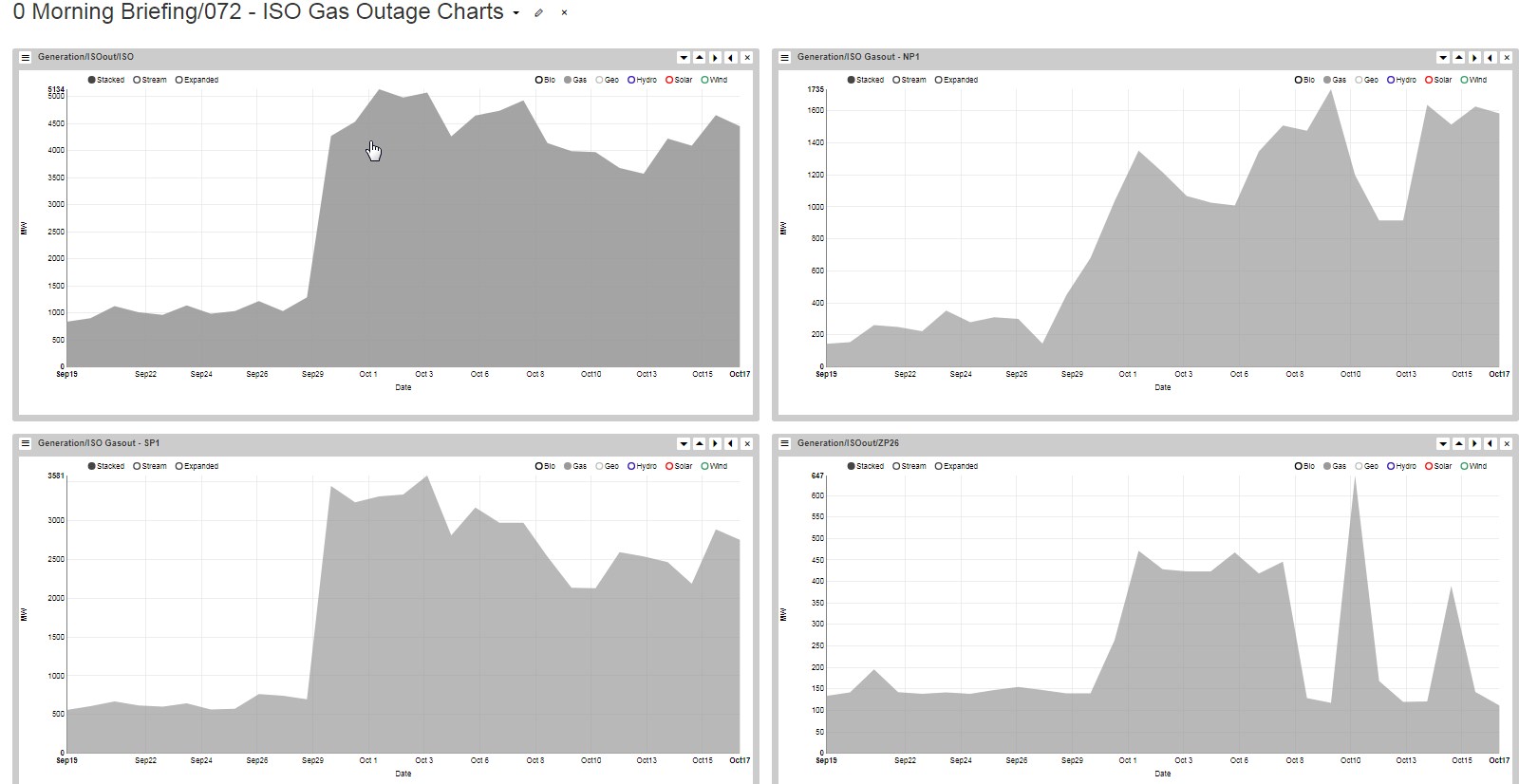 Lots of gas units out in the ISO, not a big deal given that most wouldn’t be running at these load levels anyway. 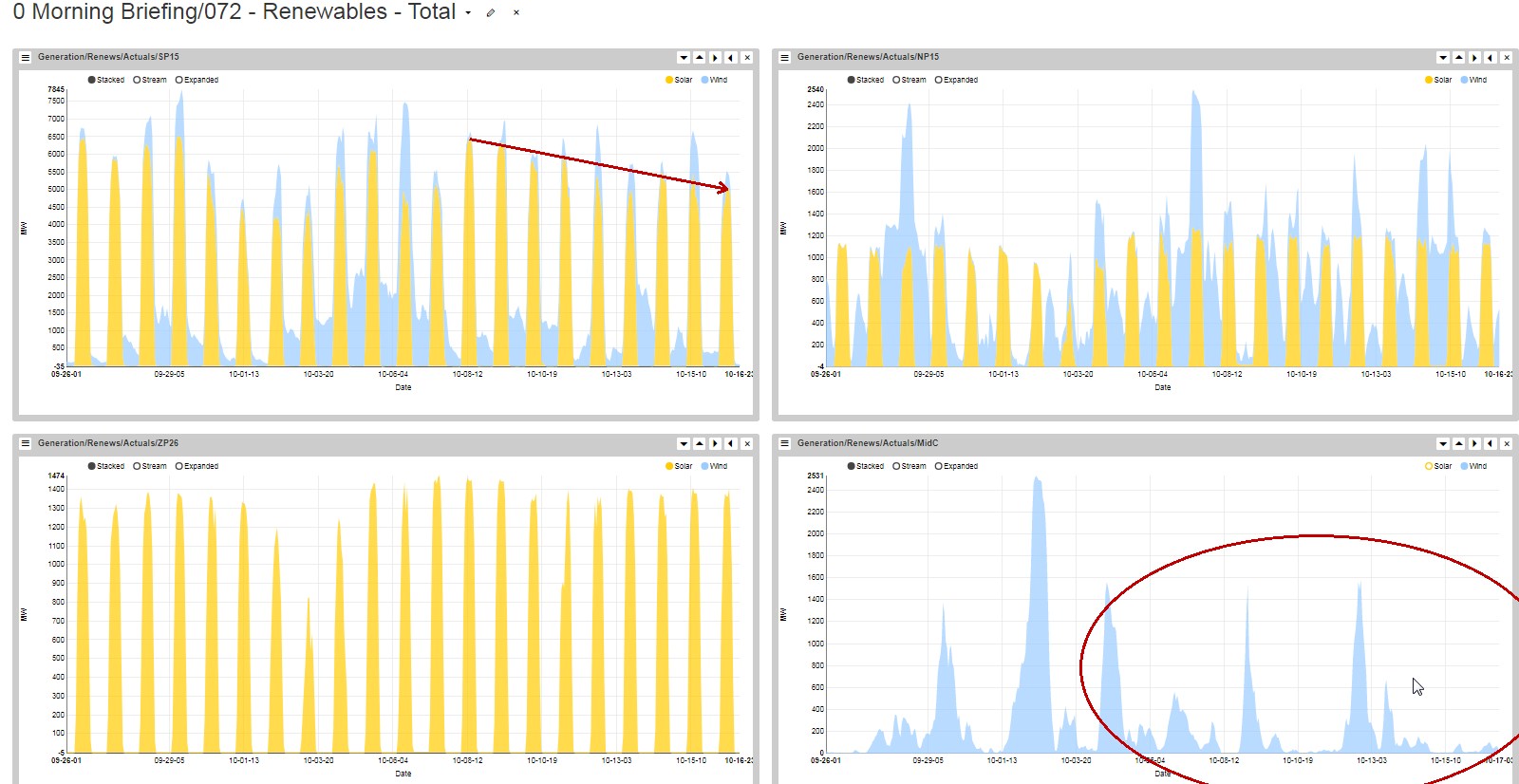 Solar production is off about 2000 MWs peak in SP over the last week, and there is no wind at the MidC which further exacerbates the Enbridge problem.

Energy production out of Coulee has fallen, week-on-week, and the reservoir is now at 1283.9 feet, which is exactly average for this date.

The Peace is base-loaded, Arrow flows rallied (drafts) and flows at the Border tanked earlier this week. It’s the shell game, without new water (rain) its pull from this reservoir and hold steady at the others.

At first, I thought the charts for John Day and McNary were broken until I realized they were just cycling for that new-found morning peak. 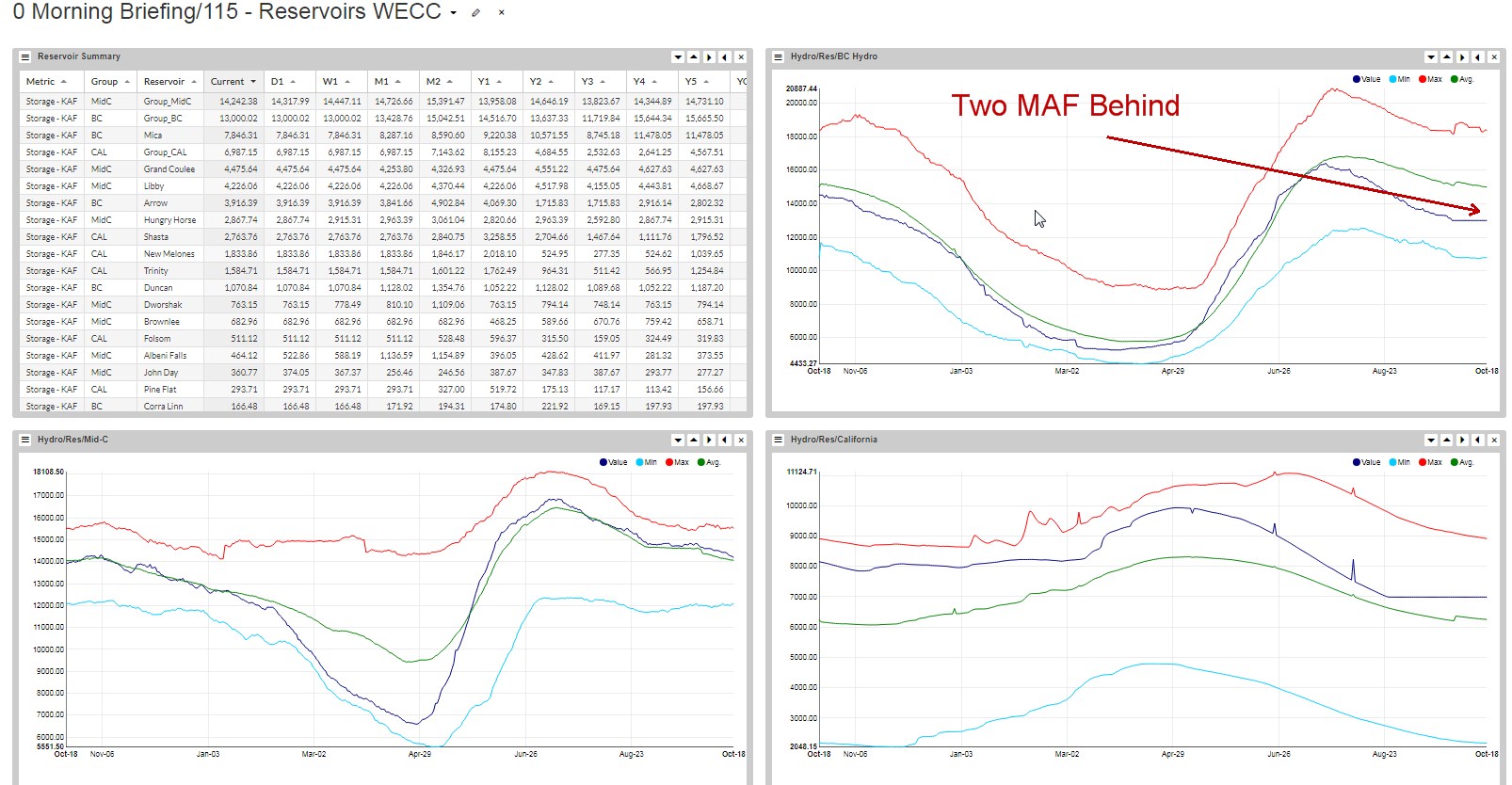 Reservoirs at BC are entering the heating season two MAF lower than average while the MidC is normal and California is a few MAF ahead.

Energy production in the ISO’s hydro system has cratered; not surprised since loads are off and it hasn’t rained since May. 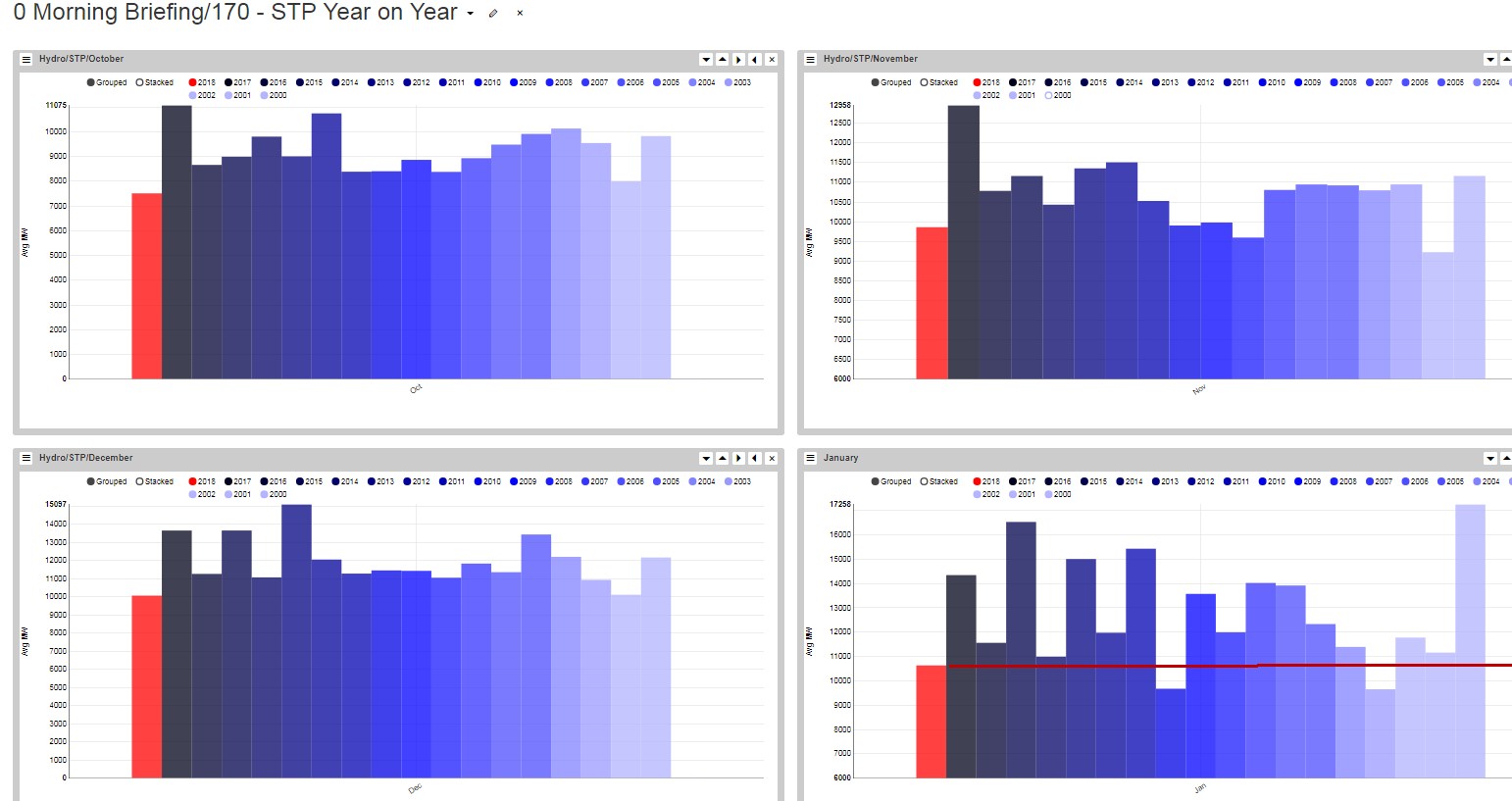 Those were massive cuts in the NWRFC’s January STP forecast – about 1300 aMW. That now puts Jan more in line with Nov-Dec, all three are close to record lows or are record lows.

BC imported energy from the MIdC – hey what’s up with that? Payback for taking more than our share of Sumas?  The DC is down and hopefully stays down through  March. Check those miserly flows on the AC, and that is when the DC is offline. In fact, all the line flows are falling.

Not the time to be bold and short; be long and strong until we get the word from Enbridge. Most likely, they’ll have a fix in place sometime in November but would guess they keep the pressure very low for several weeks while they monitor the pipe. Without understanding why it exploded, I doubt both lines go back to full capacity until next summer.