The impact of last week’s meltdown lingers upon the market; prices, as measured by the LMP market, remain surreal:

When we say surreal, we are referring to NP and MidC; both are trading at near-record high heat rates. On the surface, we tend to think the MidC is not as tight as the price would suggest, but perhaps it is. Take a look at this table:

Call it the BPA Loads & Resources tabulation, if you like. We queried out Week 30 (last week) for the previous 12 years and lo and behold, 2018 is the “tightest” of them all. Tight as measured by the Net where Net equals Loads minus resources. Last week we were saying these Northwest loads were not a big deal and as you can see, they weren’t a massive deal, though 2018 was the highest average load in the last 12 years, but not by much. What makes 2018 so tight is on the generation side, and we aren’t referring to Hydro (that was about average). It is BPA’s “Thermal” and Wind. The thermal was the lowest since 2011 and less than half of normal while the wind was the lowest in 8 years. Together, with high loads, BPA found itself, in week 30, the shortest its been since 2007. Interesting, huh!

August shows no sign of abating, price-wise, though we aren’t so sure these levels are supported by forward-looking fundamentals.

Even the LL is commanding a premium, and given BPA’s precarious position maybe the MidC is justified?  It isn’t if you look at NOAA’s forecasts: 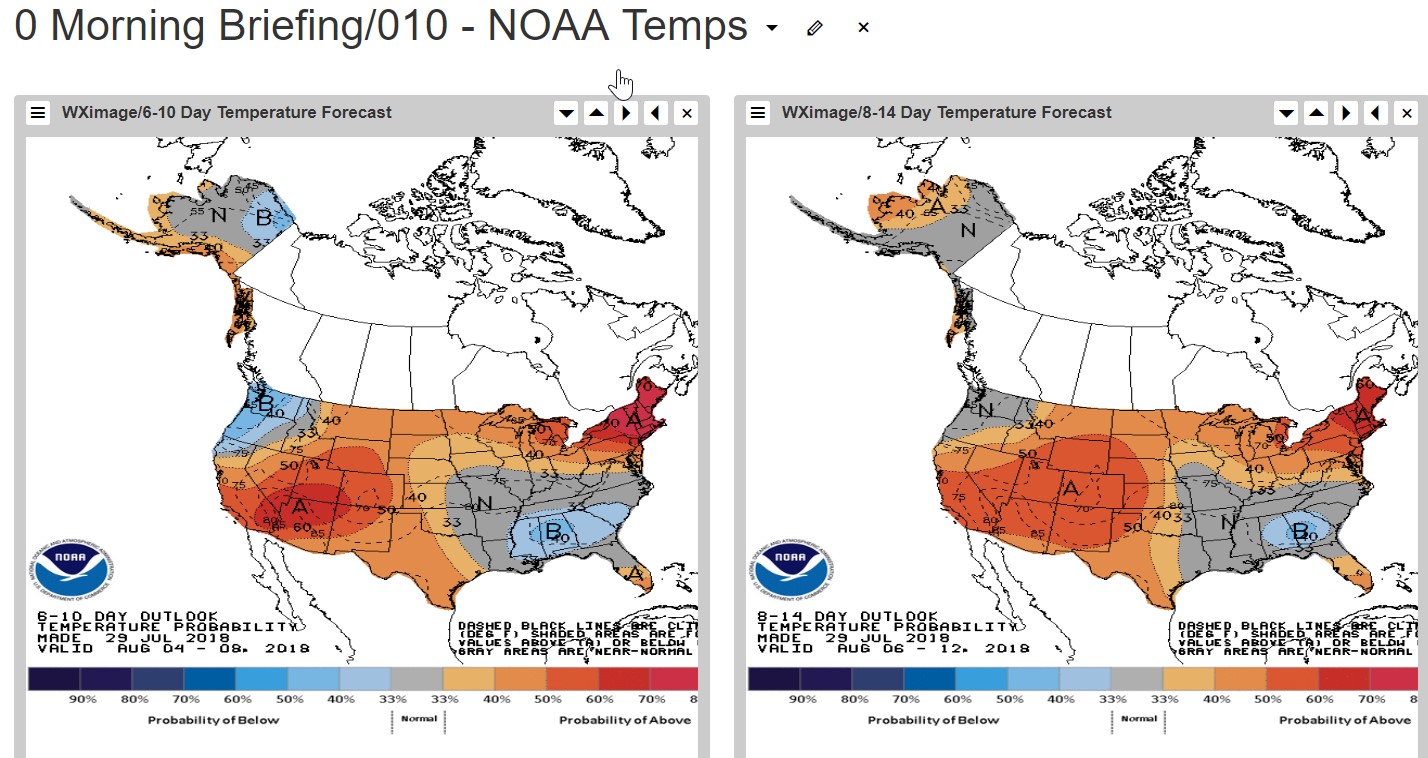 That’s blue in the MidC in the 6to10 and gray beyond. There is even a smattering of rain heading to the Northwest.  Hhhmmm.

The Citygate premium persists and has even spilled into Socal Border. California needed every molecule of gas last week, of course, it would bid up the southwest pipeline delivery prices, and as a consequence, the contagion spills into Mead and Palo. 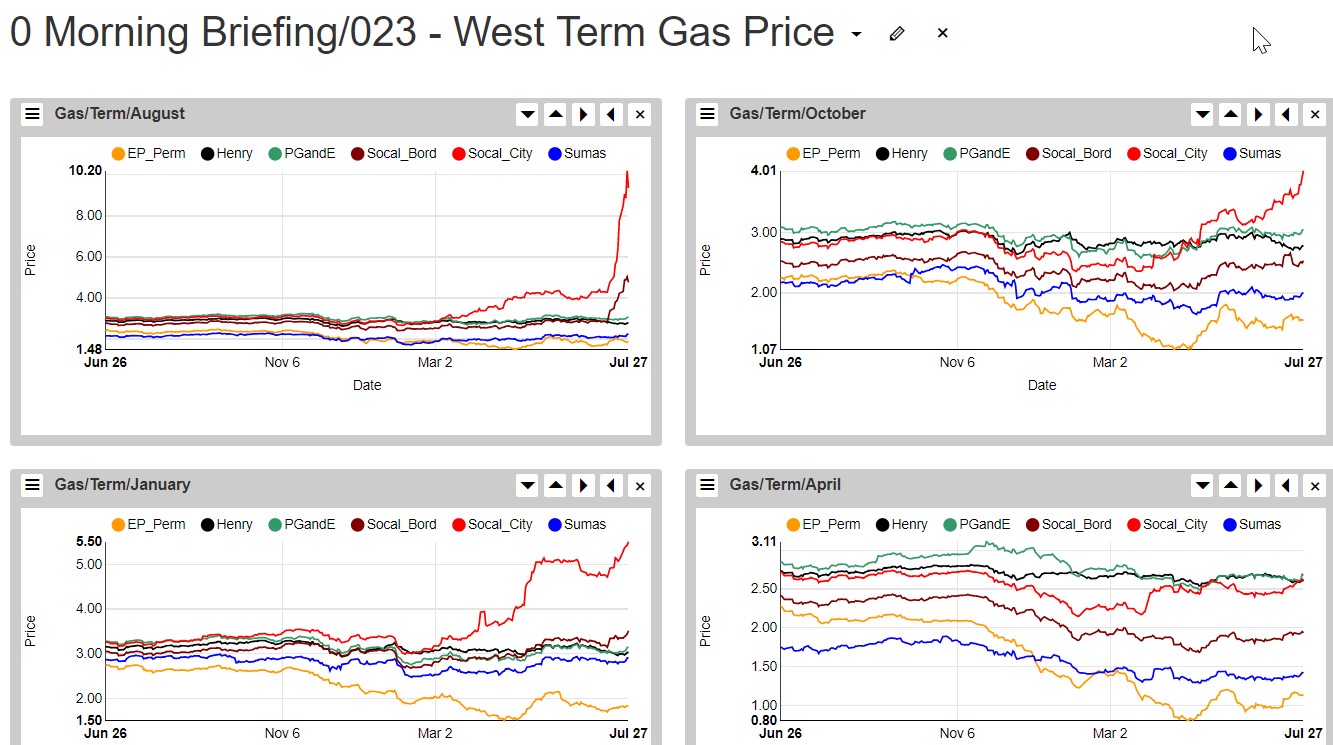 Those Citygate premiums are growing and extend into 2019. Not sure we get that given that 500 MMCF is returning on Sept 16. 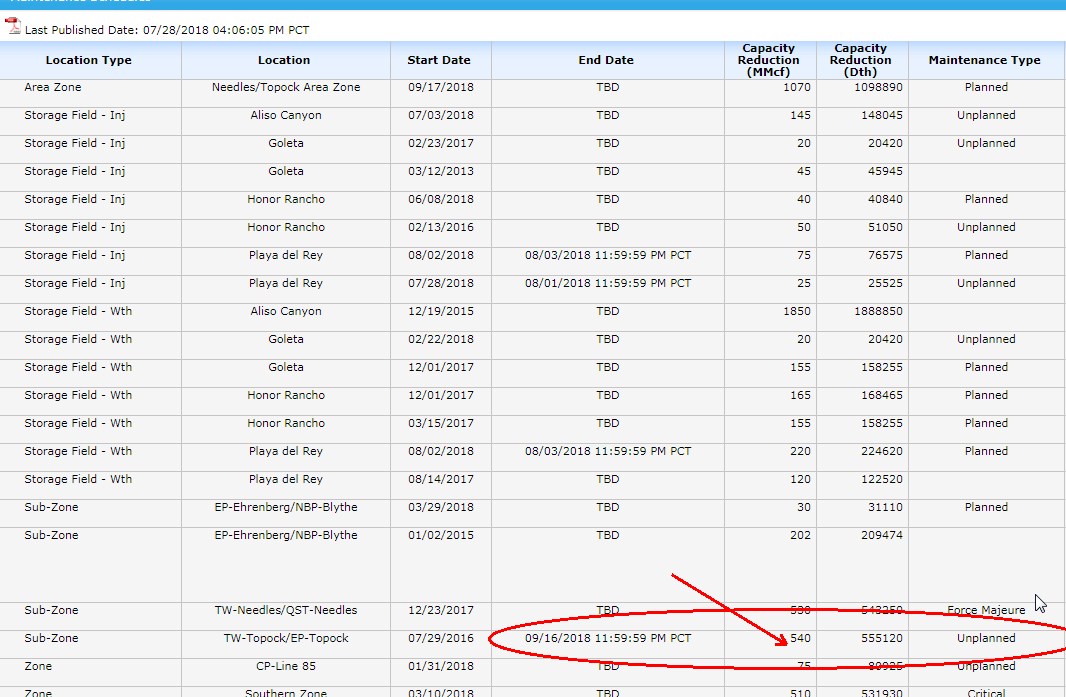 It seems about 99% of this latest “Energy Crisis” was a Socal Citygate crisis precipitated by a neutered Aliso Canyon and a castrated Transwestern Pipeline intertie at Topock. This Socal Gas maintenance schedule suggests half of their problem will be fixed by mid-September.  That should put SCG’s system back to where it was before Oct 1 last year – and shouldn’t prices follow?

Another oddity from last week was the relationship between HA and DA prices. SP15’s DA commanded a premium in every hour over the previous week: 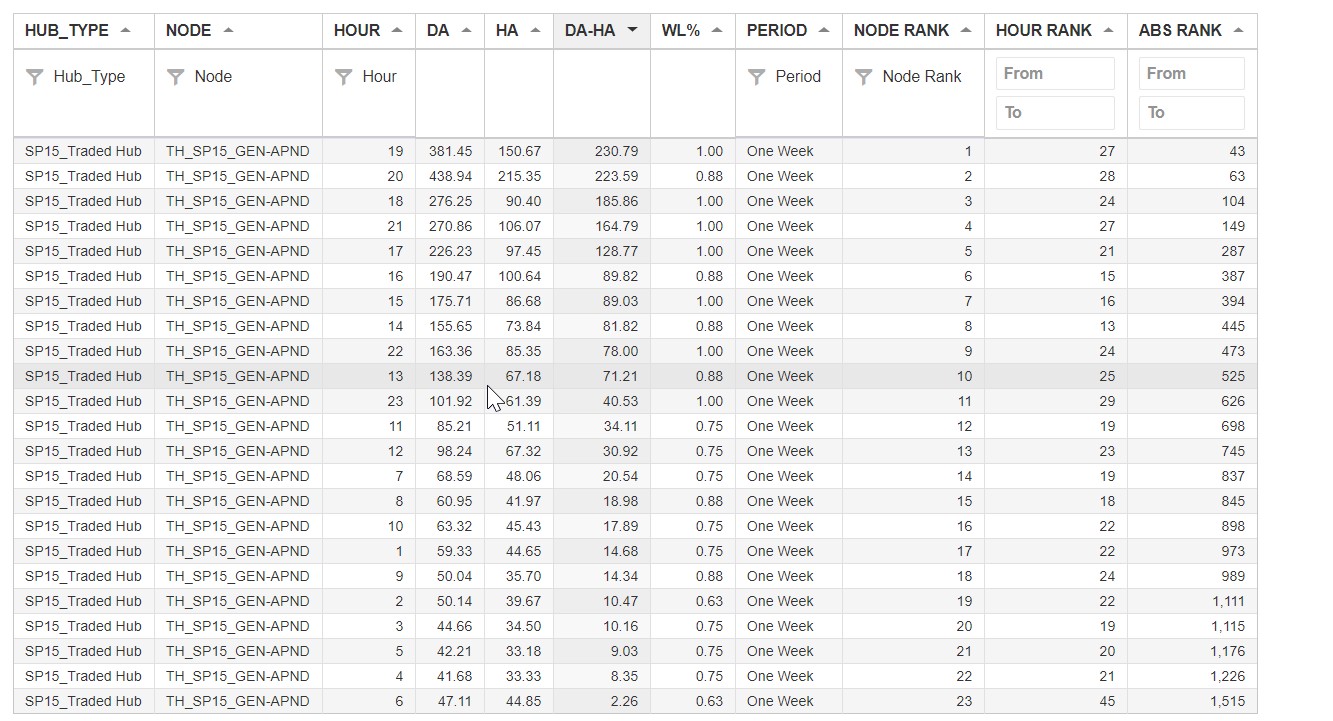 The premiums were much less, and in some cases, HA flipped, at NP15: 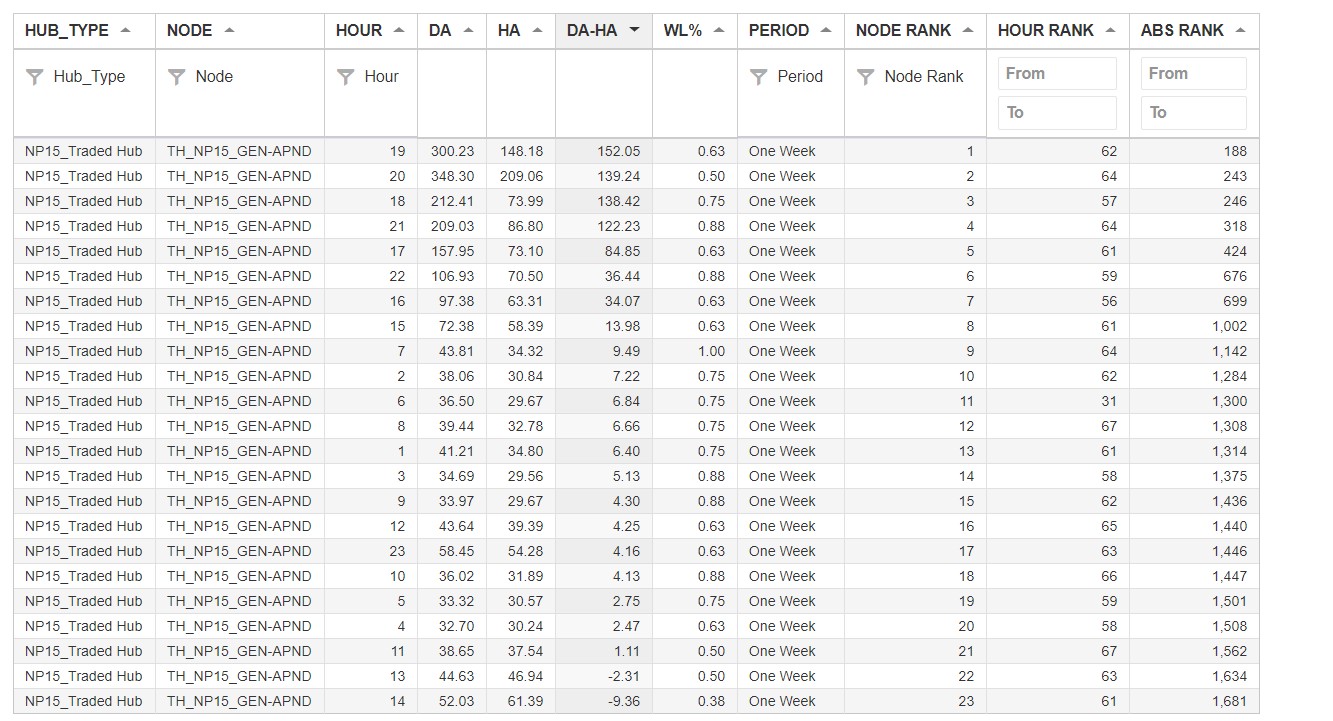 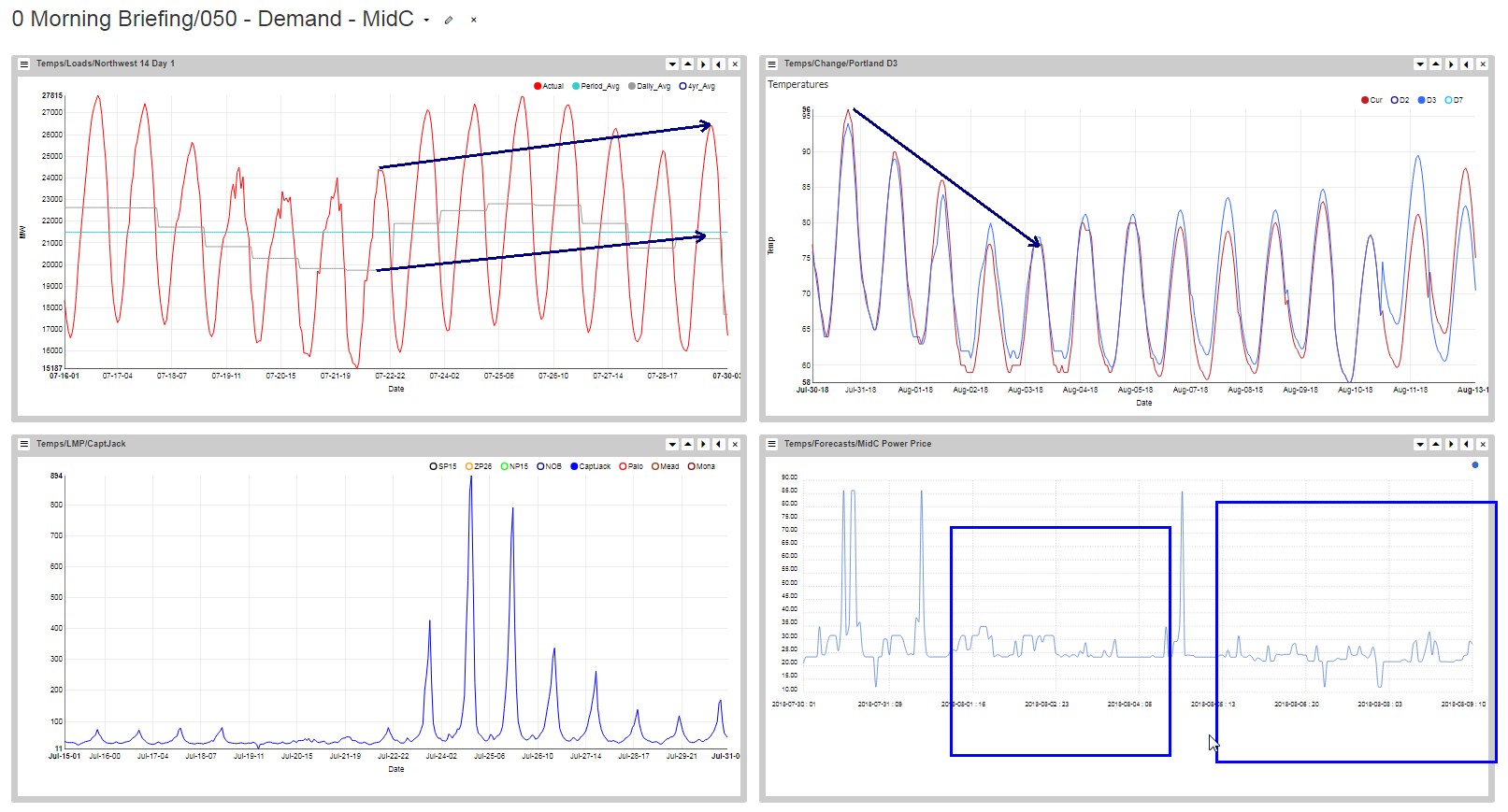 This is a new dashboard made up of some new reports. The first chart reflects actual demand for a region we call “Northwest.” We posted on this change over the weekend; there are several Balancing Authorities that either randomly report load or report incorrect load (forget about their forecasts, most are atrociously bad). We elected to create a virtual group called the Northwest that only includes valid loads; some days it might have 12 BAs, other days just 9; all depends on what the BAs report.

The second plot is forward-looking hourly temperatures and includes the forecast from three days back. The idea here is to not only report the forecast but also capture how that forecast is changing. Where you see “red” on top, the forecast grew warmer, blue on top, colder.

The third plot is the DA LMP for Captain Jack. Since the chart above is historical, we wanted to show the historical price. This might be helpful in lining up price moves relative to demand moves. The last plot is Ansergy’s hourly price forecast for the MidC and corresponds to the forward-looking temperature plot directly above. All four hubs will be reported in this format.

Enough background, let’s talk about what the charts are showing. First, yesterday’s loads soared off of very warm Northwest temperatures. Next, that won’t last through the week; temperatures are slated to plummet by week’s end. Note the price forecast loses its big price spikes by the last half, those are what is driving big dailies and appear to be going bye bye. 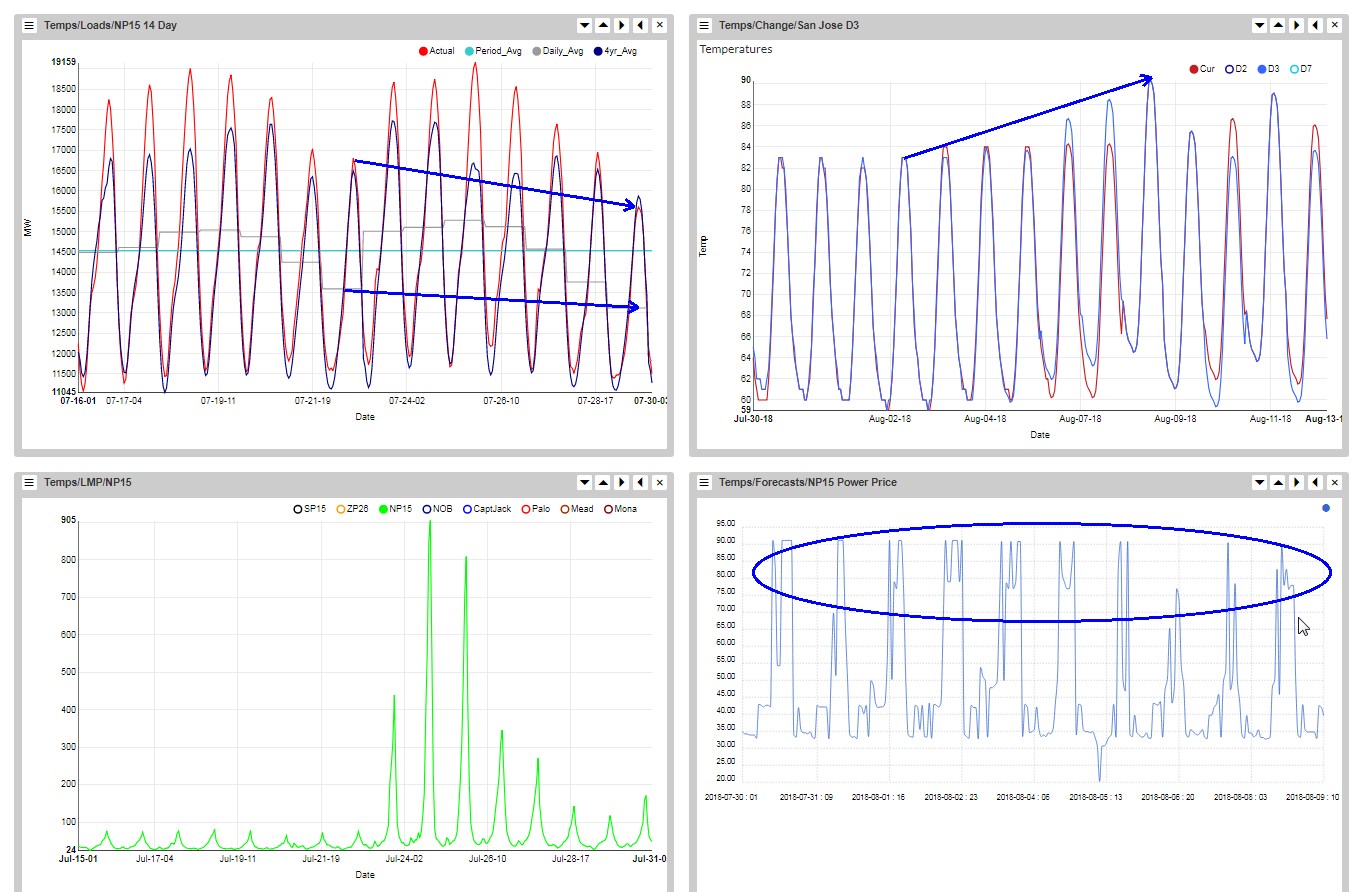 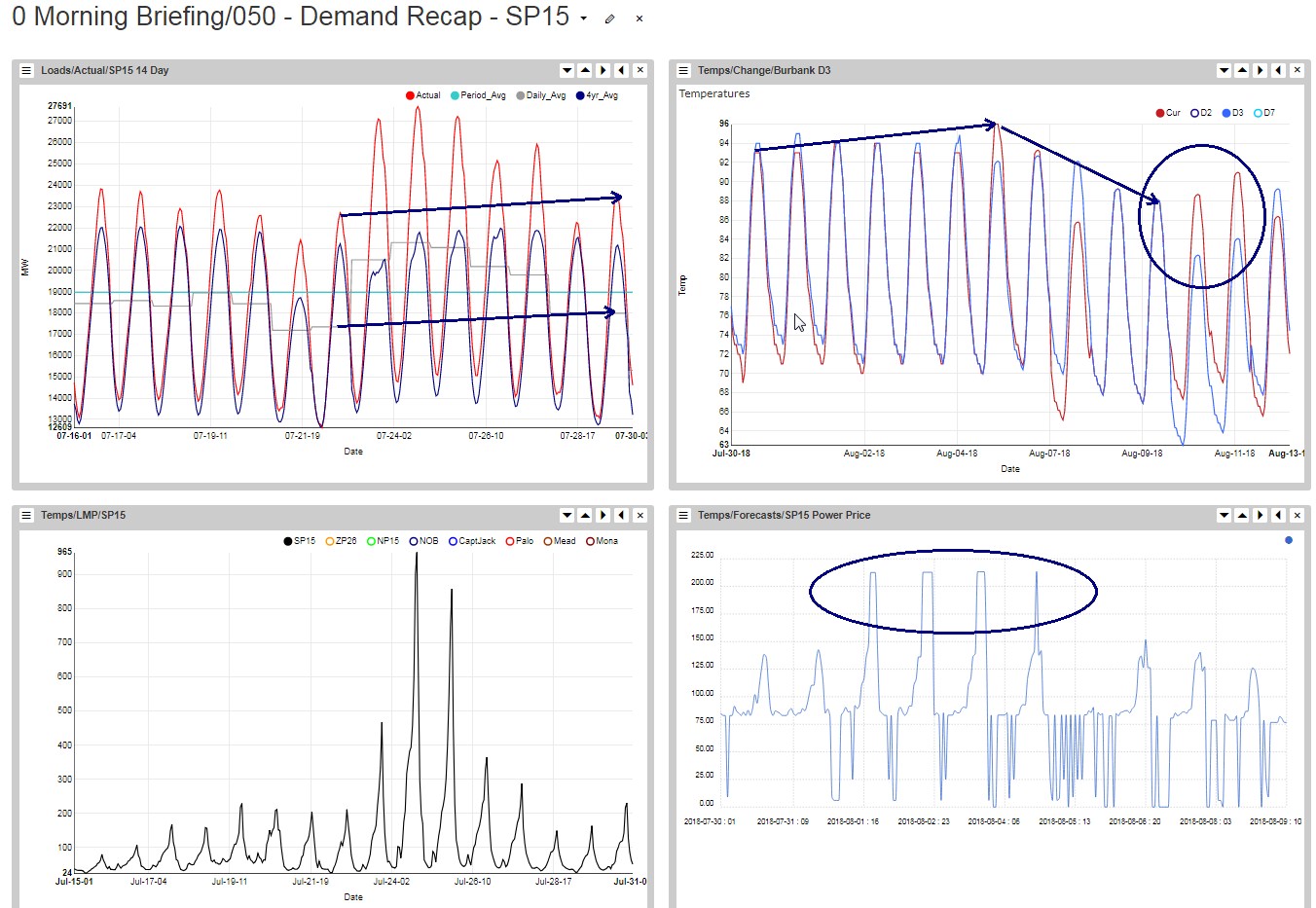 SP’s loads are up slightly, and temperatures remain hot until around day eight, then the hub cools down. The forecast suggests lots of price spikes through this week, then collapsing next week. 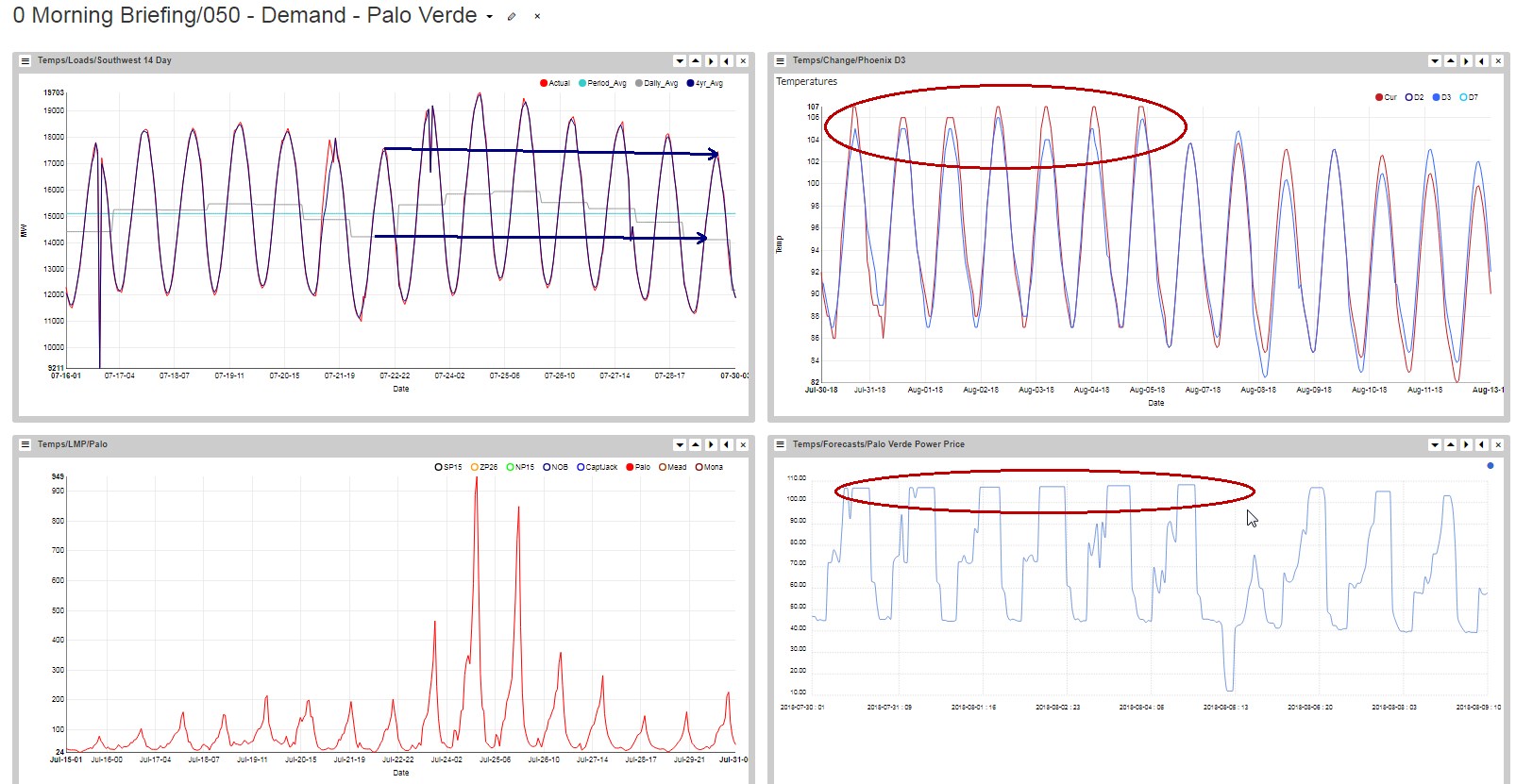 Palo weekend loads were sideways but the heat this week is real and really hot. There is no pause in the south; the heat will keep things tight everywhere. 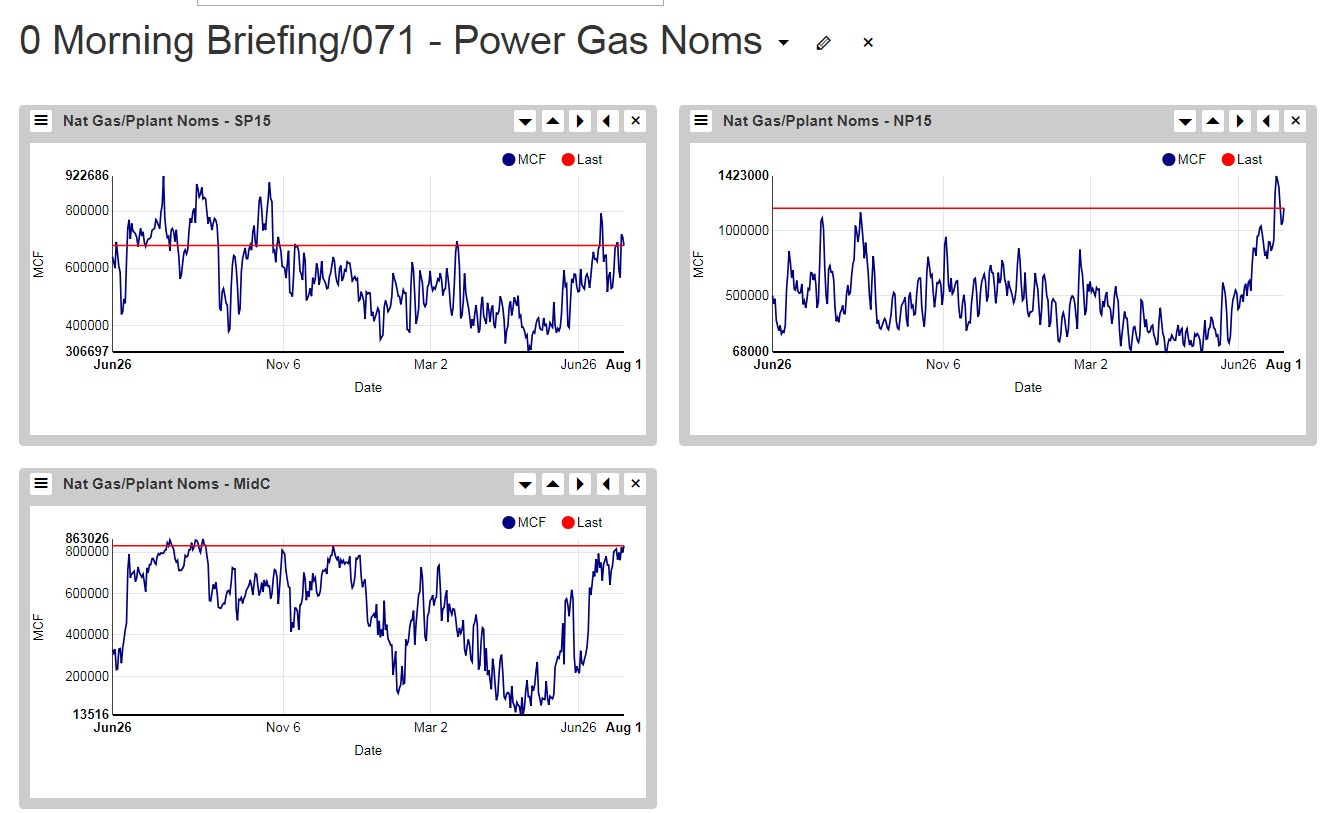 NP’s gas burn remains off the charts bullish, so does the MidC’s; the only hub with idle capacity is SP15 and only because no one can afford the insanely high gas prices or Socal Gas just interrupts the gas.

Look how tight the MidC truly is:

Every Honda generator in the Northwest is running, something you don’t see every day.

We already mentioned how Wind had been a letdown for BPA; you can see just how much of a letdown in the above plots. Solar in California is off, perhaps because of all the smoke? 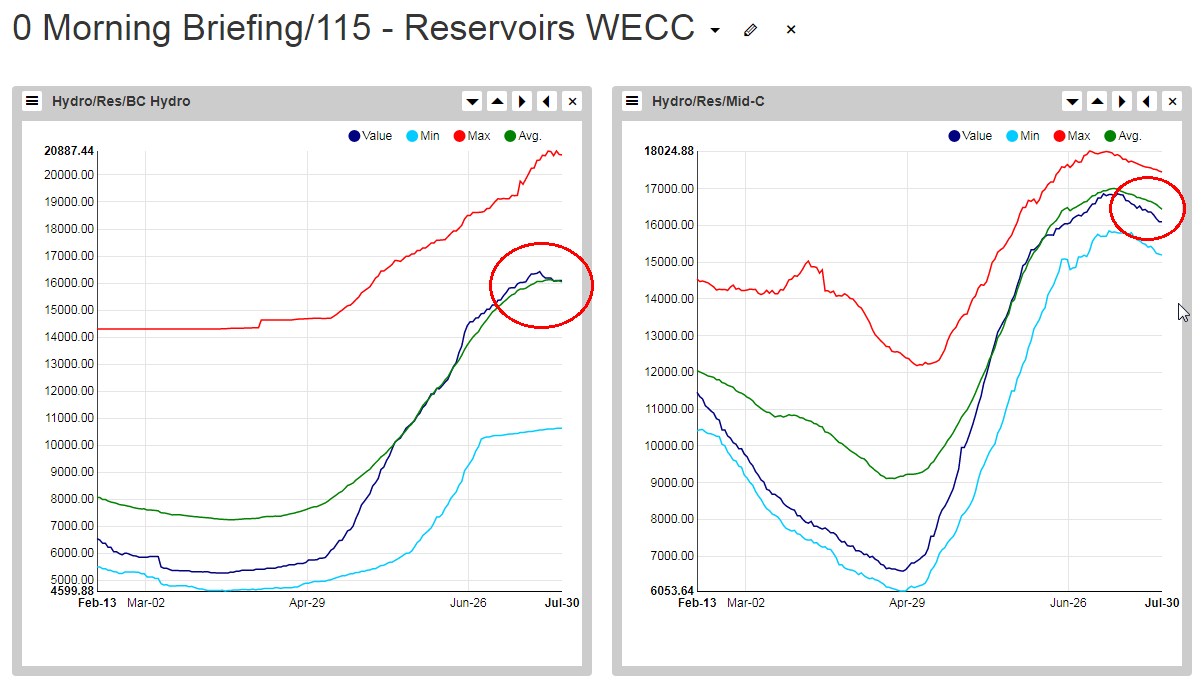 It might be time to grow a tad bit concerned about the health of the Northwest’s hydro system; MidC’s reservoirs are now below normal and trending to drop even more.

Coulee is sitting at 1284.3 feet, a 15 year low for July 30. Though it is only two feet below normal, there is a strong likelihood that BPA will pull more out this week. This won’t be an issue should things cool down as the current forecast suggests, but another heat wave will raise eyebrows. 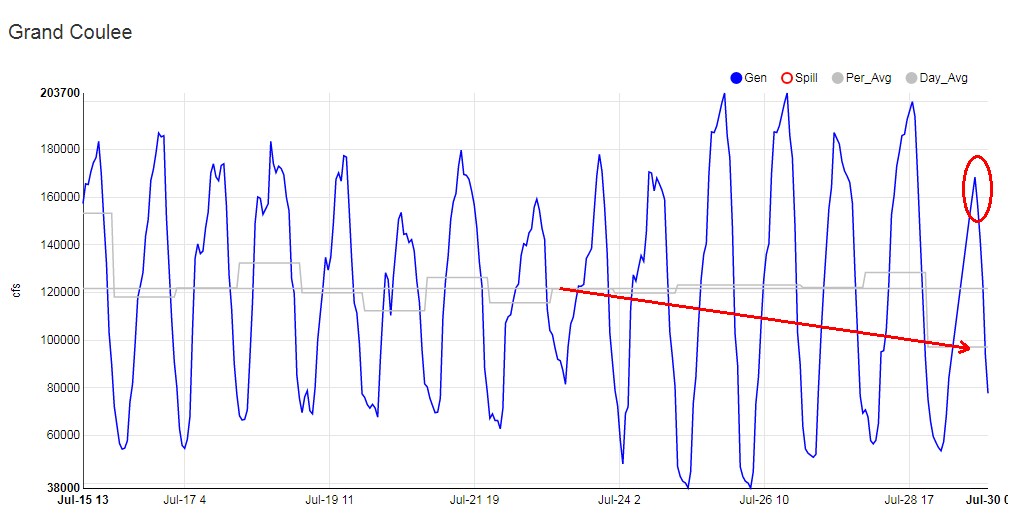 BPA is starting to husband its scarce water, flows at Coulee dropped 20k yesterday; the peak dropped 30k, all on a very hot Sunday.

Meanwhile, Arrow started cycling, and the total draft is up, putting further pressure on BC Hydro’s storage. Mica discharge is now at a five year low though the Columbia River flows at the International Border are now no longer at their ten-year lows, they are just above. 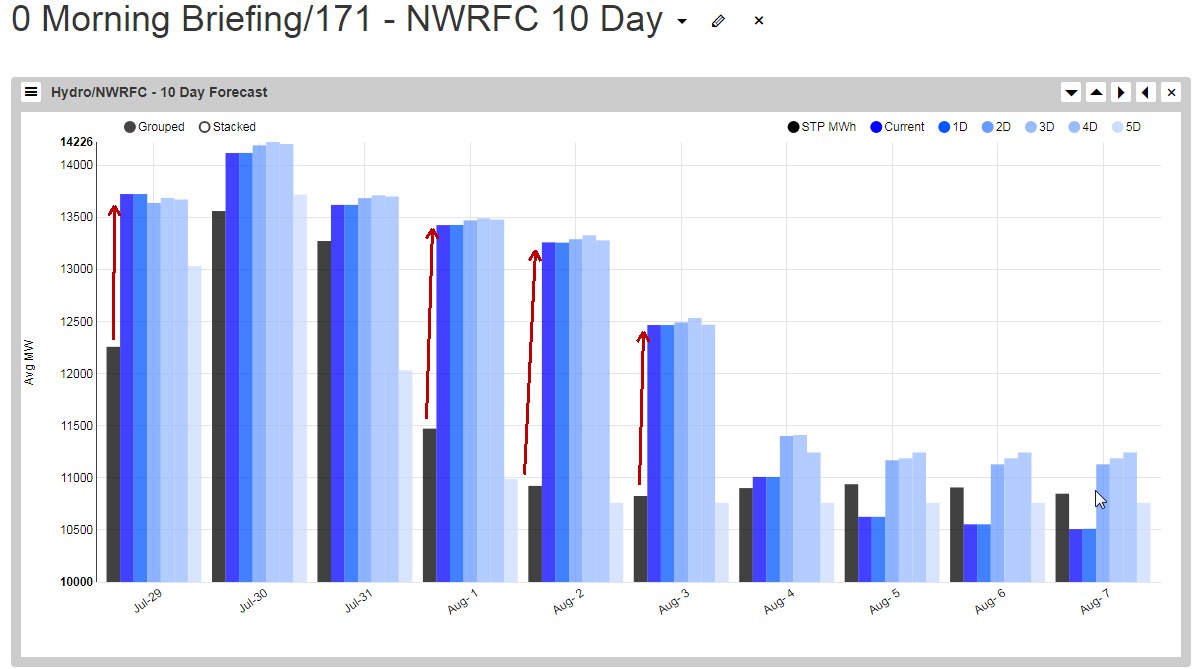 The Random Forecast Center is jacking flows – where is that water coming from? Should that sentiment hold, expect today’s STP to have a sizeable August bump. 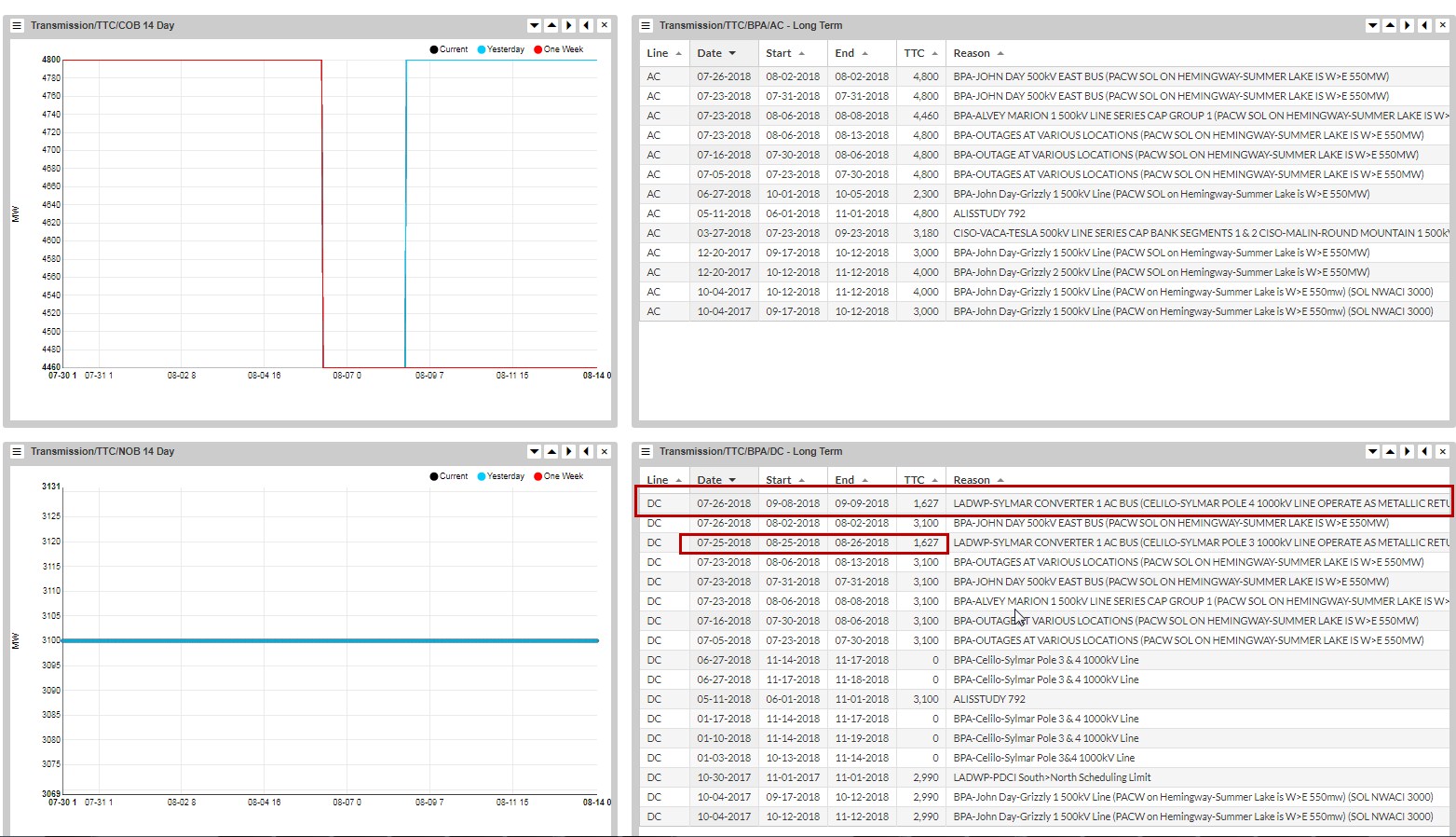 BPA slipped in some new DC outages for late August and  early September, just a few days but the line’s rating is cut in half.

BC is selling, and the NOB and COB are not even close to TTC, reflecting the tight energy markets in the Northwest. Nothing is flowing either direction on Path 15, but LA is sucking every kilowatt out of ZP via Path 26. Mead and Palo remain opportunistic sellers into the ISO but don’t count on anything flowing as it grows hotter in both hubs.

It remains hot and tight. Prices won’t collapse just yet, but when they do this may be teed up for the most significant short in the last fifteen years. Stay tuned.