This last week was a wild ride, driven by extreme heat across the WECC. All eyes were on loads, including ours, but we didn’t like what we saw. Not because the loads were high, or not high, mostly because the reported loads by the EIA contained either missing or invalid records for a few of the Balancing Authorities.

Though this is just data and doesn’t impact our forecasts, it is crucial data. It seems the EIA’s Open Source Project is missing an audit component, several of the Balancing Authorities either randomly submit their loads or submit bad loads. Forget about forecasted loads; those are even worse. Ansergy isn’t willing to abandon the EIA’s load data; there is no valid replacement for much of it. Instead, we have made the following changes.

On that last point, Palo Verde is the most impacted since Salt River, and Tucson are two of the worst offenders. Without those two, the Palo load aggregation is missing over half the load. So, instead of reporting Palo we report Great Basin which includes Utah, Nevada, and Arizona.

Mid-C has a similar issue, though it is not as bad as Palo, we are still uncomfortable calling it “MidC”; instead, we created a new group called Northwest. Interestingly, BPA’s EIA load data is incomplete and mostly incorrect. But, the load data scraped from its OASIS site is mostly accurate, so now we swap out the EIA and use the OASIS. Odd that the two federal BAs can’t meet a federal requirement and just goes to show how inefficient governments can be.

We made some other changes to the Load Group of Reports, which now includes Four Reports. 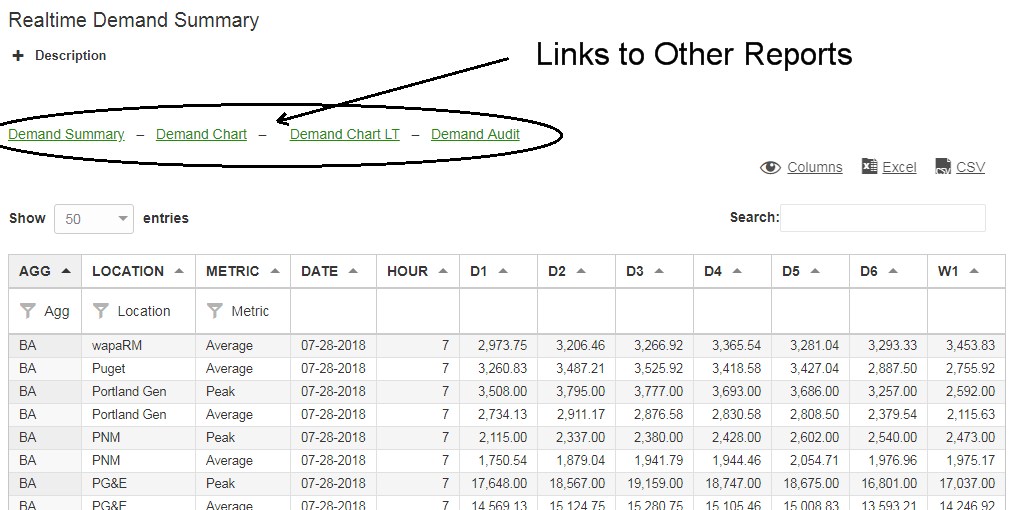 This is mostly the same as the old Summary except we have dropped reporting the BA’s forecasts, now the two metrics are Peak and Average Loads. The periods across are different; now we report only Full Days where D1 was yesterday, D2 two days back, etc. The Date and Hour fields are informational only; they return the most recent timestamp for valid data. For example, WAPA Rockies (wapaRM) most recent data was 7/28 HE07. 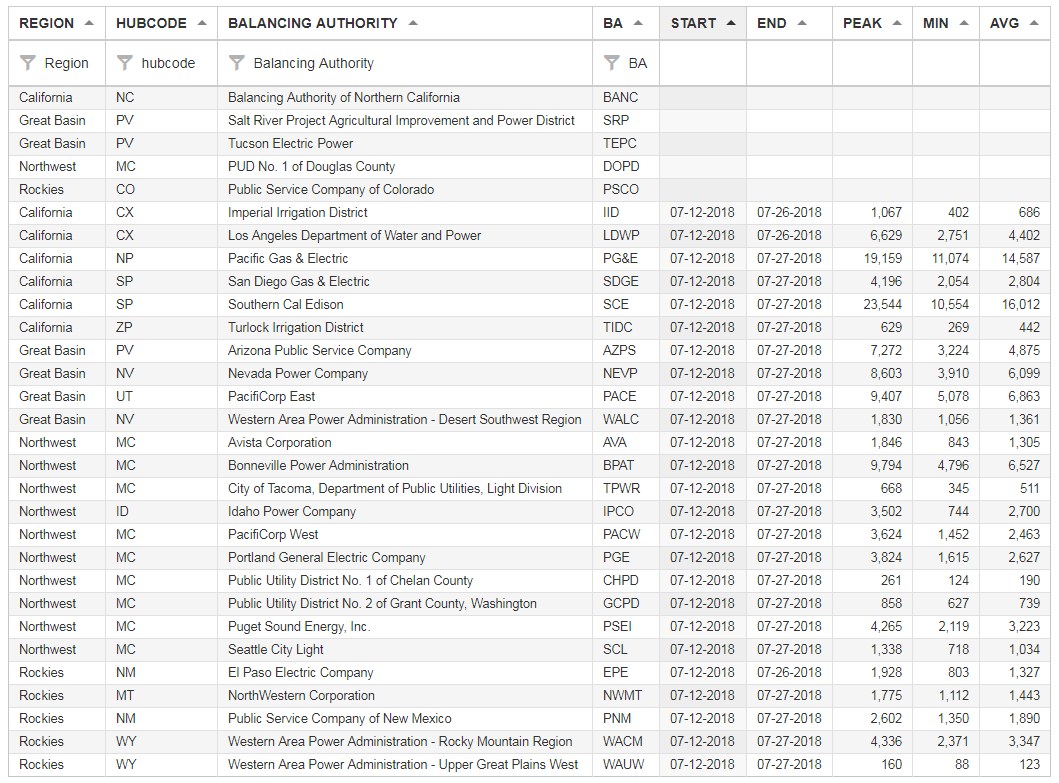 This report can be accessed via the Demand summary or chart URL and returns the status of each Balancing Authority. I sorted on START ascending which places the four Rejects at the top: BANC, SRP, TEC, and Douglas PUD. The rest of the BAs are listed below and include their two week Peak, Min, and Average loads. Use this report to see what is aggregated into the Regions. 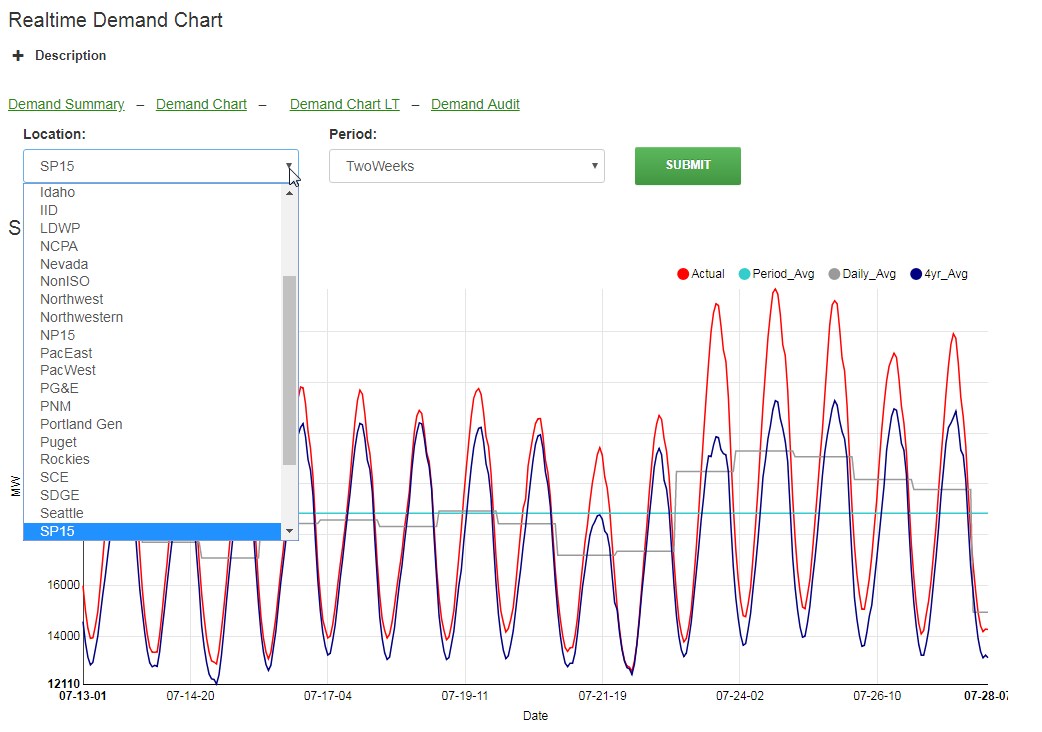 The chart is mostly the same except it only returns valid BAs. It also includes a Period Average which is merely the average of all the plotted hours. The Daily Average is the 24 hour average for that date. The 4yr_Avg is just that, the average load for that day over the last four years (the EIA reported period)

There are three chart periods you can plot: 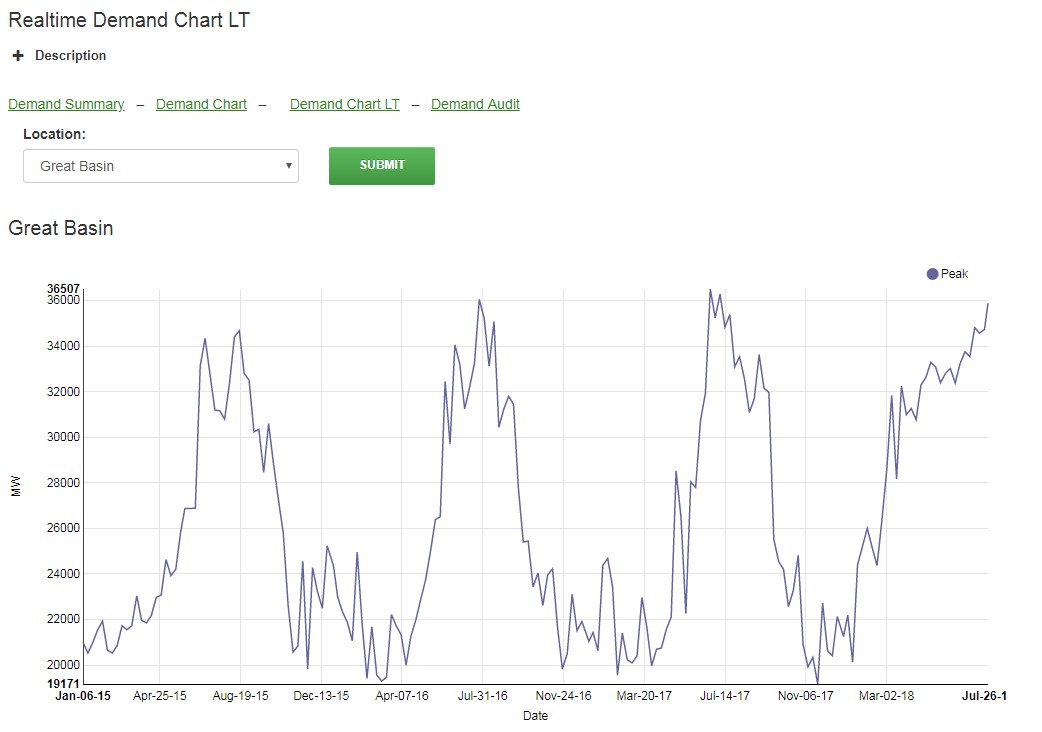 This is a new chart; it returns the Peak Load by week for the last four years. All BAs are included since Ansergy proxies out bad data. Useful for comparing current loads against prior years.

We will be updating our Morning Briefing dashboards to incorporate these changes. If you have any custom dashboards, or you are using any of the other Ansergy dashboards, you should make the necessary changes or contact Garrett or Bill to make the changes.