Everything is heating up, both market prices and weather. Let’s start with markets. 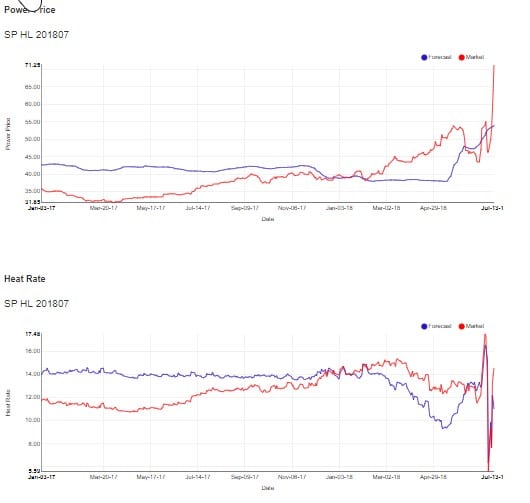 I can get SP after all the DA LMP cleared north of 100 during the last big heat wave. With more heat on the way, these prices seem not out of the realm of reality, especially when looking at the heat rates. Friday’s clear was just north of 14k, less than it cleared last March.

But it isn’t just SP that is trading in the stratosphere, check out the Mid-C: 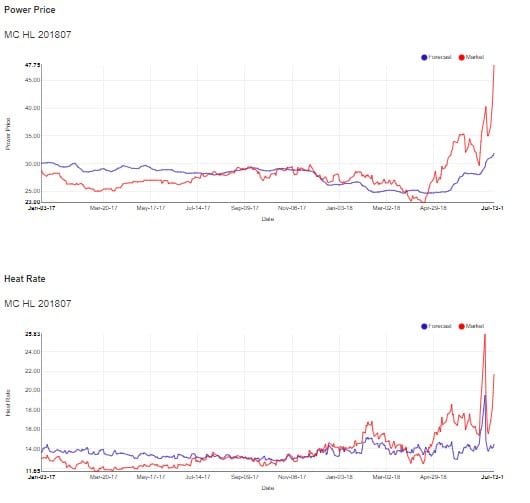 The market is up 30% in a week, and the heat rates are all over the map, settling just about 22k on Friday. This gets hard to rationalize, the 22k heat rates, but if you look at the state of things today, and compare against what is coming, perhaps these are “reasonable.” First, let’s look at the weather:

In a word, this is a 14-day scorcher, and the ISO load centers are at ground zero.  These pictures are misleading; they don’t tell how hot nor when it’s hot.

The Northwest cools off then re-heats; note the timing of when it warms back up as those dates correspond with heat across the WECC. Unlike the LA blast of a week ago, when none of the other hubs were hot, this next one will see all WECC cities well-above averages.

See those NP temps, slightly above average for a week, then significant heat at the same time as Portland. Loads at NP are up, week-on-week.

Same story, slightly above average this week and back to potentially the hundo’s next week. During the previous big heat wave in LA most other load center cities were below normal, not this time. Week-on-week loads are off due to mild temperatures – barely 70 in Burbank.

Check out those negative anomalies over the next few days in Phoenix. This mini-Siberian express has caused noon tee-time futures to soar in Sun City, but the power markets have just been yawning their way through it all.

SP15 Day Ahead LMPs jumped $18/mwh for Sat vs. Monday, and that was off a modest change in loads. Everything is testy in LA, gas is tight, and power responds accordingly, but the heat rates remain reasonable. Not true in any other interconnection point, heat rates range from NP’s 14k to Mona’s 22k as all hubs are sending power to LA. Why? To keep SCE’s ratepayers from buying $5.32/mmbtu gas to run LA’s turbines. 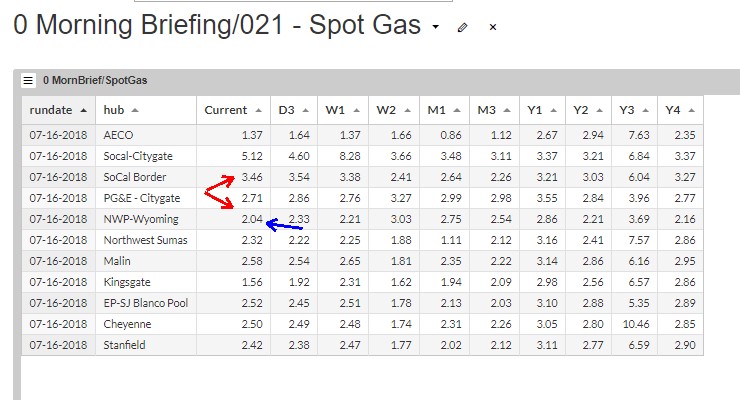 Even Socal Border gas is commanding a premium; now it is trading $0.70 premium to PG&E Citygate, it’s a brave new world. MidC gas mostly rallied, Sumas, Malin, and Stanfield were all up despite all Canadian points of entry being down AND NWP Wyoming off too. Futures haven’t supported any price rallies: 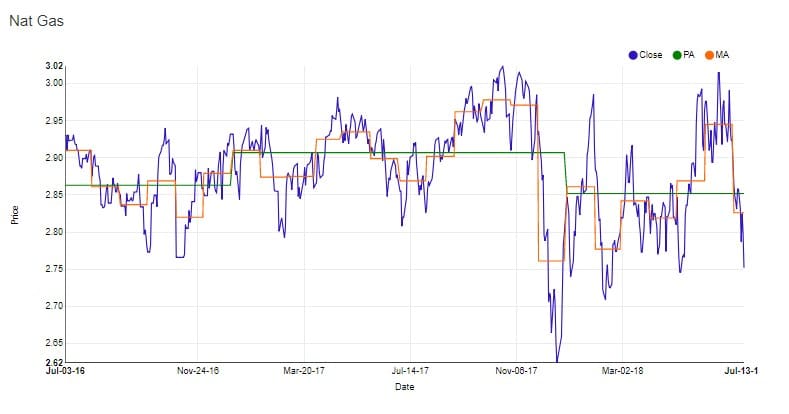 Natty has been a free fall for most of July and wouldn’t take but a week more of that to hit a one year low. With a big cooldown on the east coast it might just best that, but seems West Basis is its own commodity this summer. 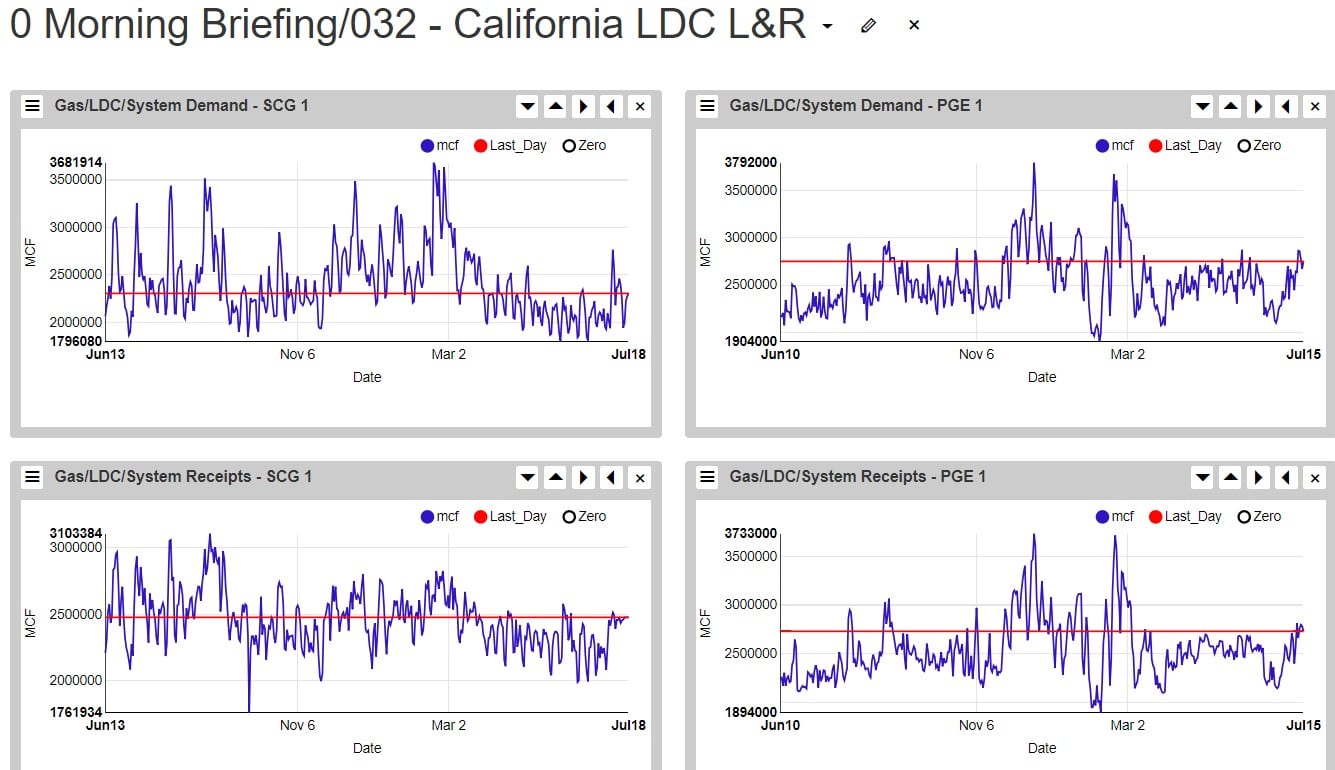 Now and then we like to dip our toes in Lake Reality, and usually pull them quickly out. The above plots are Socal Gas’s reality. Not demand has fallen since the big heat and supply has rallied rendering no impact on storage, Socal is still building. Not hardly a recipe for energy armageddon but don’t tell that to the natty traders.

SP solar is up 1000 MW from the dips of last week, now its back to full production. NP saw robust wind energy across the recent 24-hour block while it was windless in Seattle, perhaps the least amount of 24-hour wind energy in a month or two. 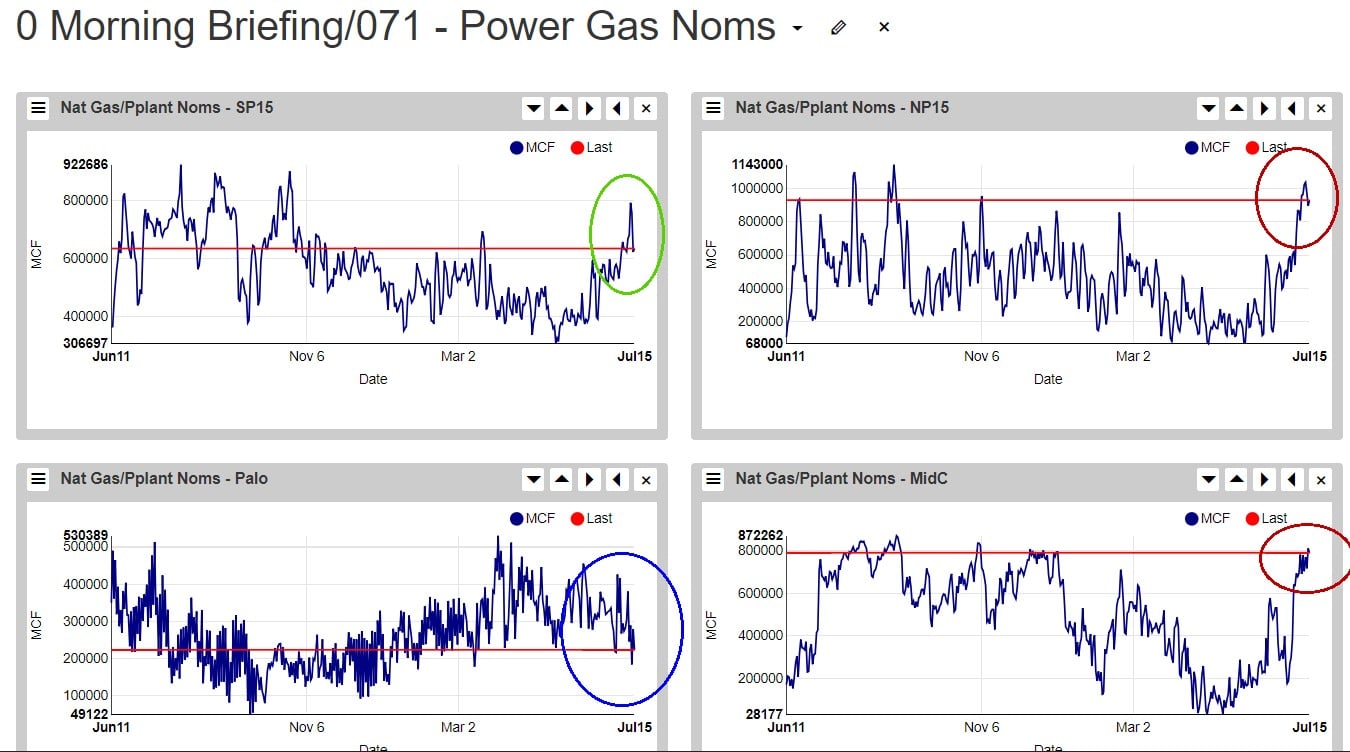 As expected, SP gas noms for power took a step back after the significant heat, but we were surprised at how strong, and resilient, NP and MidC’s noms are/were. What you’re seeing is the rest of the WECC serving SP’s load, so Edison’s ratepayers don’t have to buy $5.50 gas to generate their power. This also suggests there isn’t a lot of surplus juice left in the tank come the next heat wave. Most everything is running at both NP and MidC. 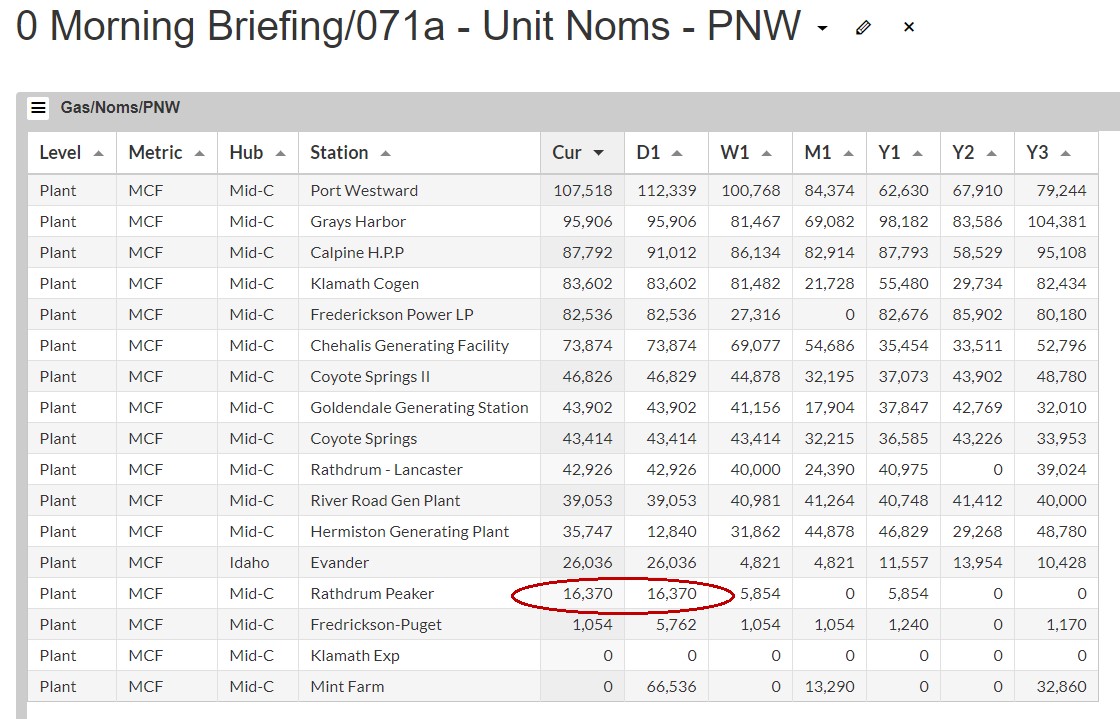 Most turbines are online, even Avista’s peaker is running. So how does an incremental 5000 MW of peak (or average!) load get served? Hydro, right? The system is running barely a 50% plant factor, that is another 15kmw of idle capacity, right? Wrong. Capacity long, energy short. There isn’t enough water but BPA can still draft its reservoirs and they probably will. Still, a hole in the pond in mid-July is not what the federales planned for last month. 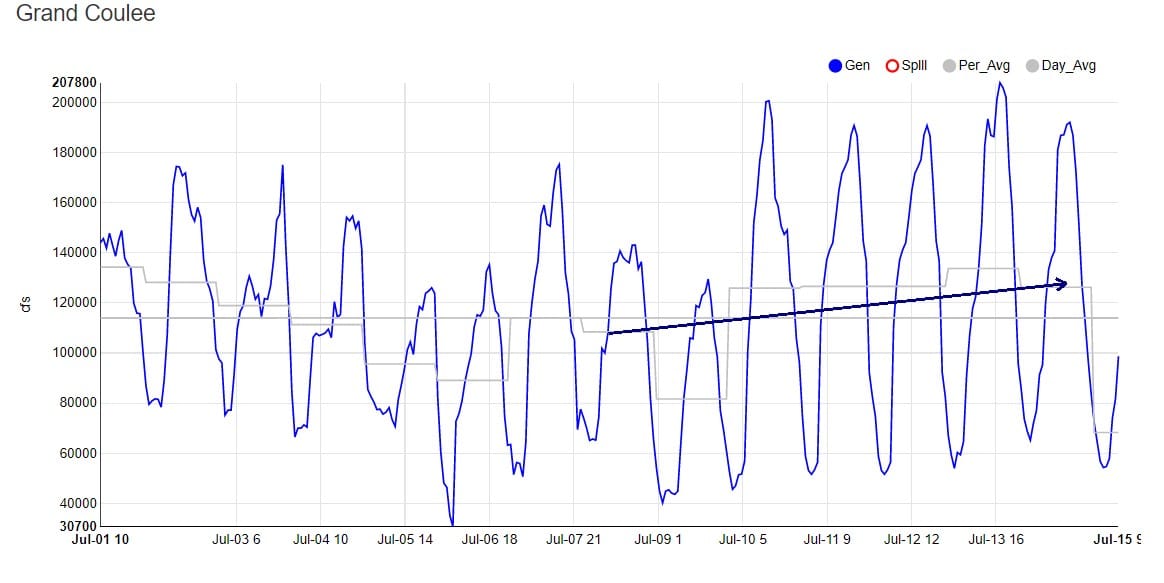 How much flexibility does BPA have? Just take a look at Coulee; they pushed 200kcfs through on HE18 and dropped to a low of 45kcfs on HE03. Assuming a peak WECC load from HE 15 to 22, BPA most certainly could draft at 200kcfs all through those hours, at least down to 1280′ forebay, but they won’t, and won’t need to. Ultimately, SP will need to serve some of its own loads, even if they must burn $6.00 gas, all of which suggests BOM SP might be cheap!

BC could draft Arrow harder, in fact, they already are drafting harder, up about 10% in a day. Note the Peace, barely registering, and 50kcfs seems about hydraulic capacity. Clearly, Powerex could generate a lot more power but is there room on the Northern Intertie?

Yes, maybe 1500 aMW more energy could flow south. Even the ties into SP15 are weakening. The NOB is at a six-day low and Path 26 is on a steady slide to zero. Only Palo flows are rising just because of the Ice Age in Phoenix. 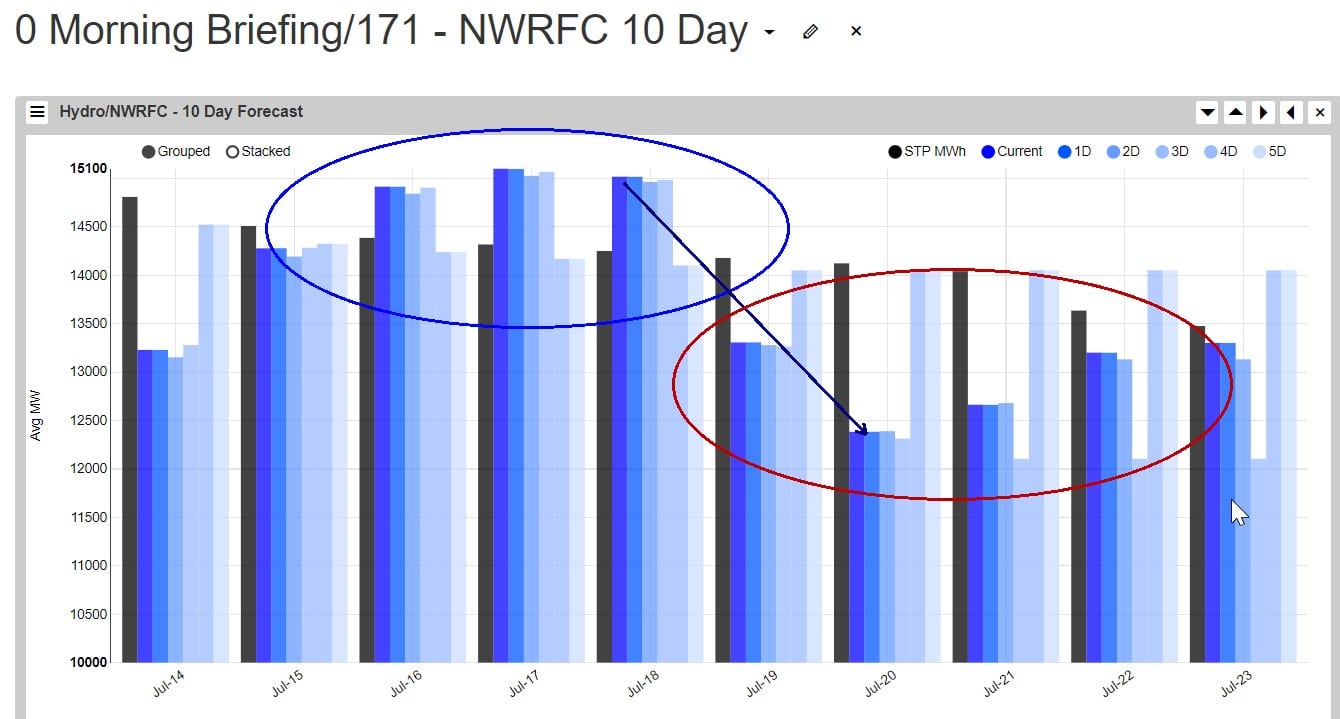 The RFC has bumped its 10-day for the next five days, probably to serve strong demand, but then has projected out dramatic cuts in days 6-10 day, perhaps to pay for those rallies in 1-5. The problem with this forecast is it ignores that next heat wave which lands around days 7-10.

The ISO will see a full week of above average, albeit slightly, but then there is the possibility of extreme heat. High-Pressure systems tend to build both in intensity and duration, and this one is camped across the WECC all through NOAA’s 8-14 day. This is not the type of event you want to fade, even though prices are sky-high. I recall the sickness I felt at covering shorts in May of 2000 thinking how stupid it was to buy back $30 short sales at $45. Two months later, those July contracts were trading at $500.