The shock of record heat in LA is still felt even though the heat has departed. Spot gas remains remarkable strong inside Socal despite moderate demand.

This is a new dashboard which returns System Demand and Receipts for PG&E and Socal Gas. Note Socal’s receipts are up, but demand is way below last summer’s levels. You don’t see that in SCG’s price: 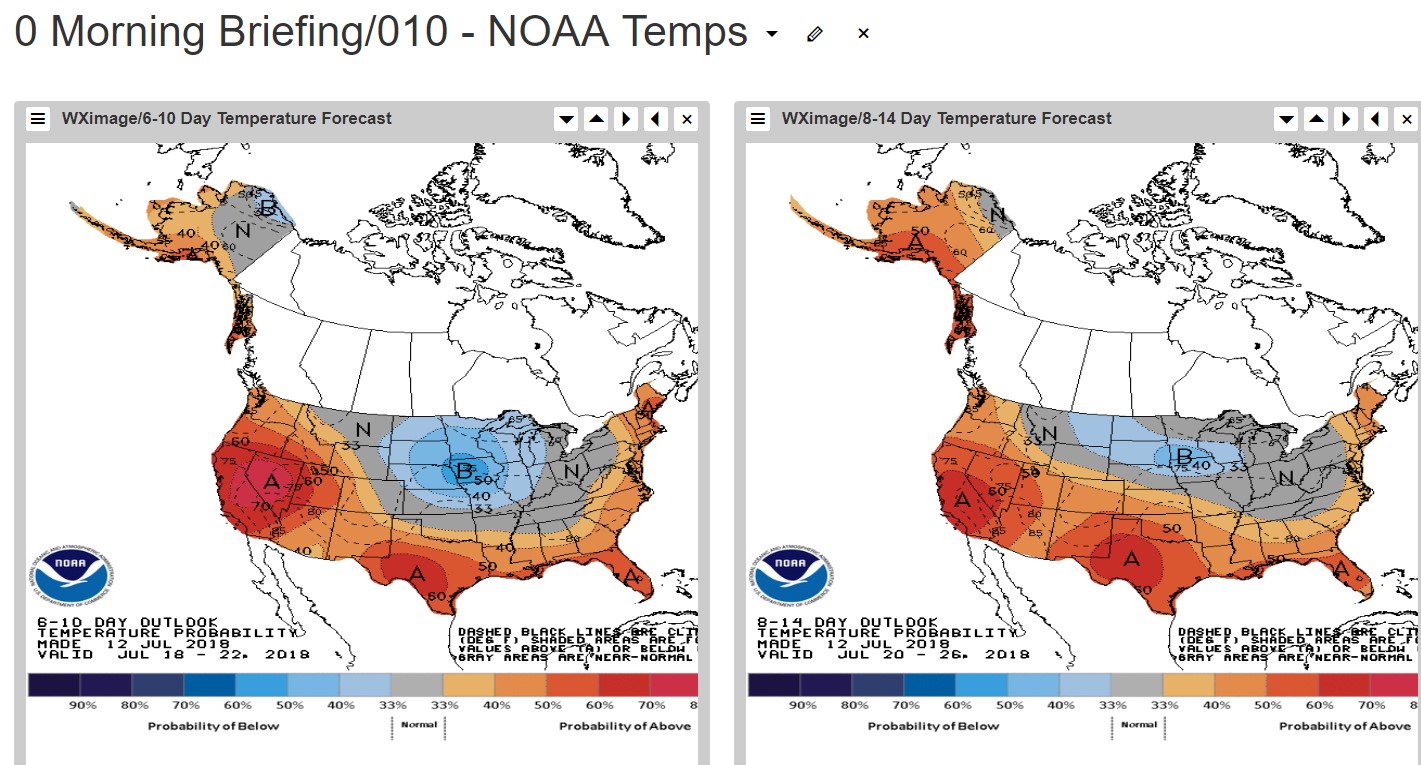 In the next go-round, the entire WECC will be warm, and the load-center cities are hot. Perhaps those gas price premiums are valid? 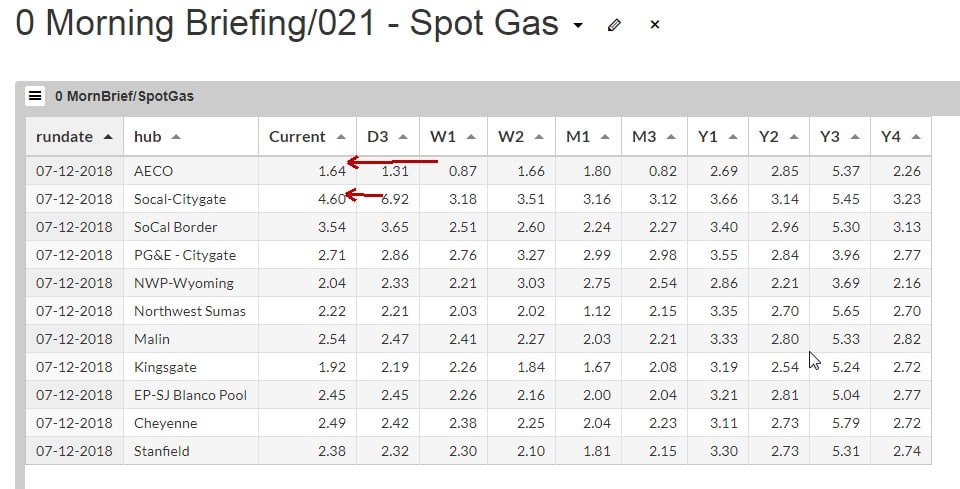 It seems the entire WECC spot gas has firmed, even AECO doubled in price from a week ago. Citygate remains the premium hub and with more heat en route that won’t change.

Even SP’s heat rate has rallied in the last couple of days, now it’s clearing at 13k, and the weather cooled. 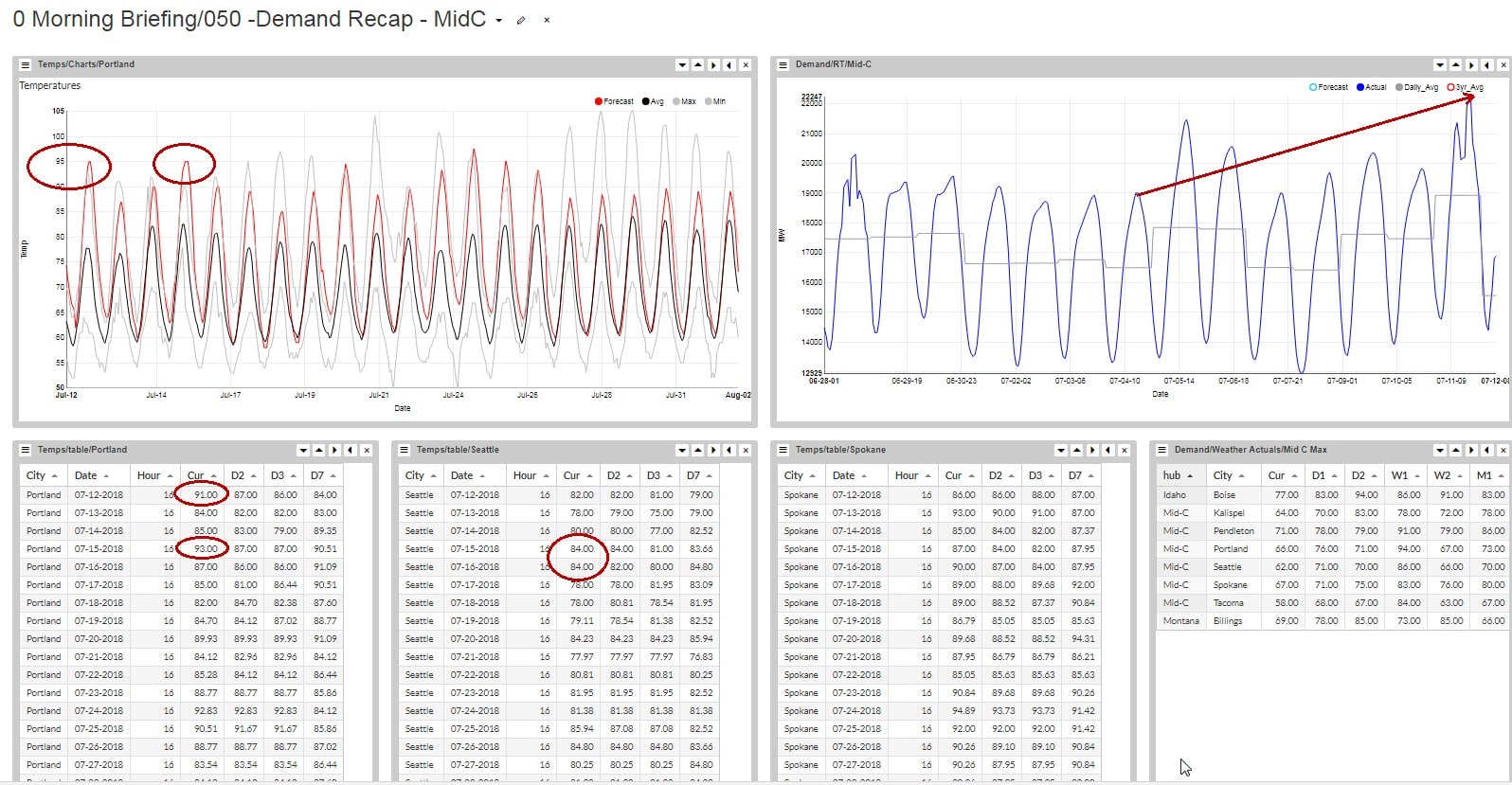 MidC’s loads rallied hard off of warm weather, and those temperatures will keep climbing and stay hot for what looks like most of the month. We’d be nervous about short BOM positions here, either LL or HL. 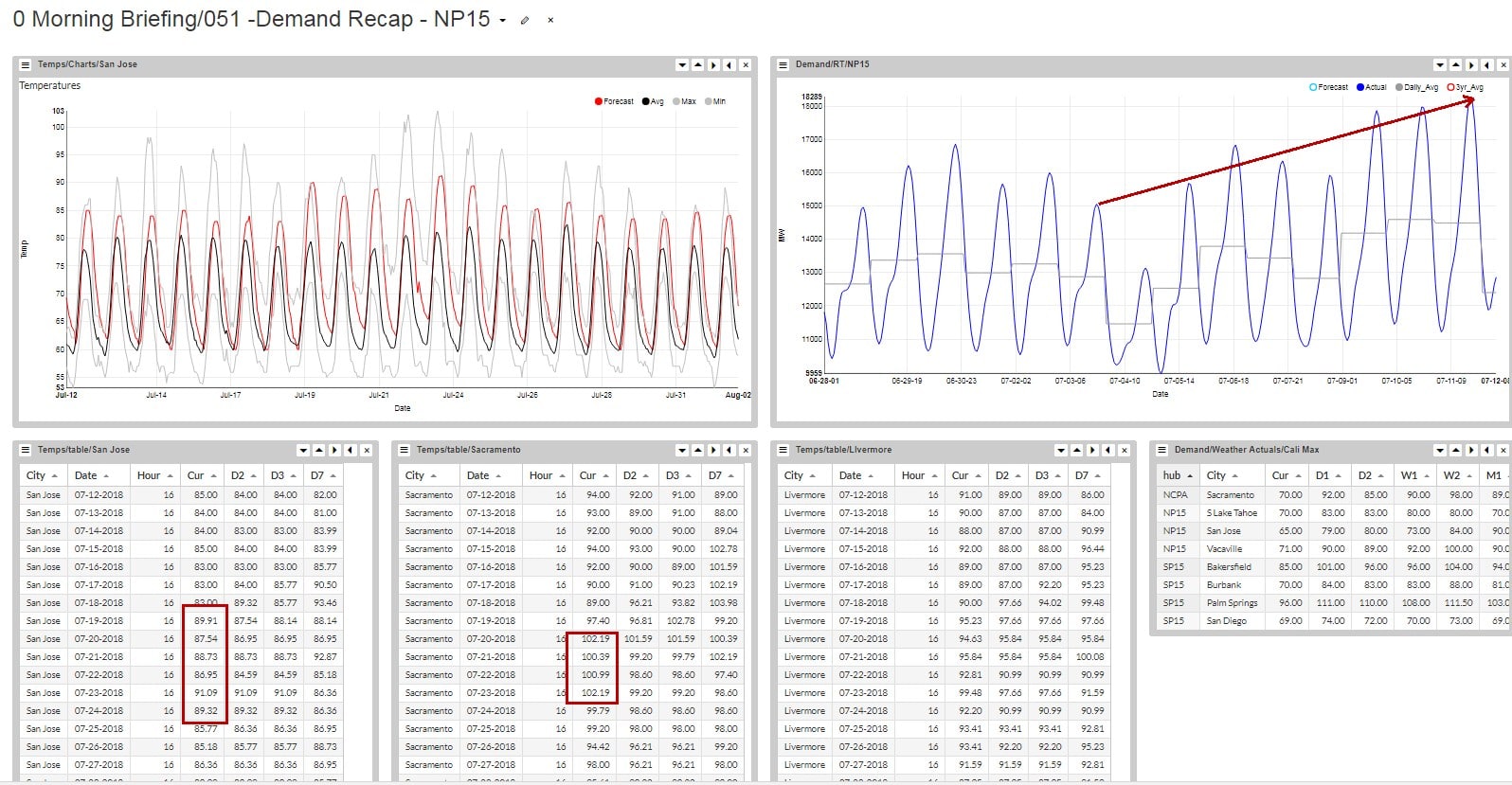 NP’s loads rallied off of last week’s quite cold weather. The seven-day outlook is slightly above average but days 7-12 have some very hot weather, potentially. 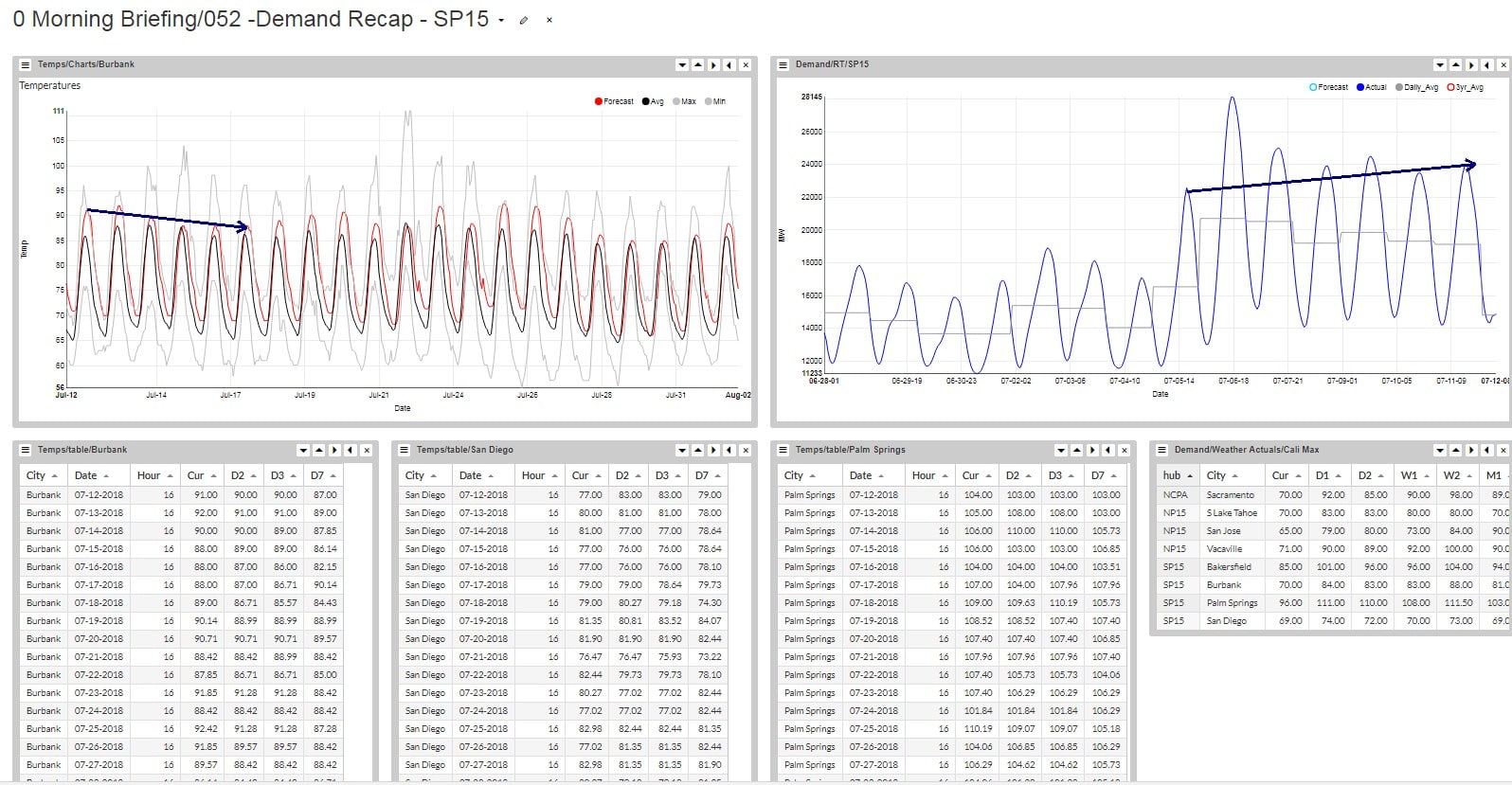 Temperatures will continue sliding at Burbank into next week, then stage a rally. This one forecast that isn’t in sync with NOAA’s 6-10 day; in the latter, the LA Basin bakes. 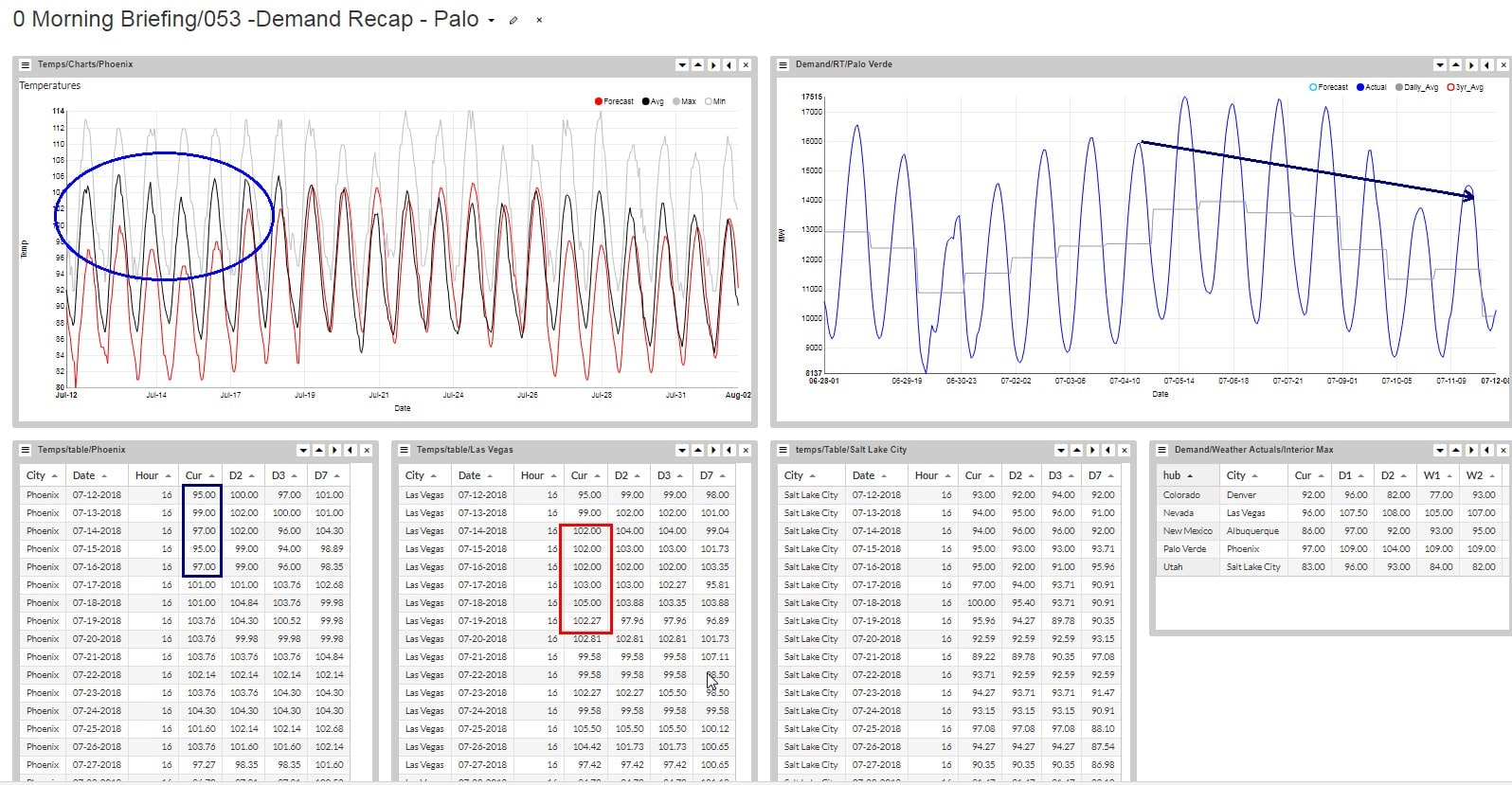 The Phoenix forecast is the most anomalous of all and is 5-10 degrees cooler than average. Vegas, on many days, is warmer than Phoenix. Week-on-week loads at Palo are also off and will stay weak well into next week.

Peak solar at SP is off 1500 MWs from a week earlier. Wind is sketchy, as usual. 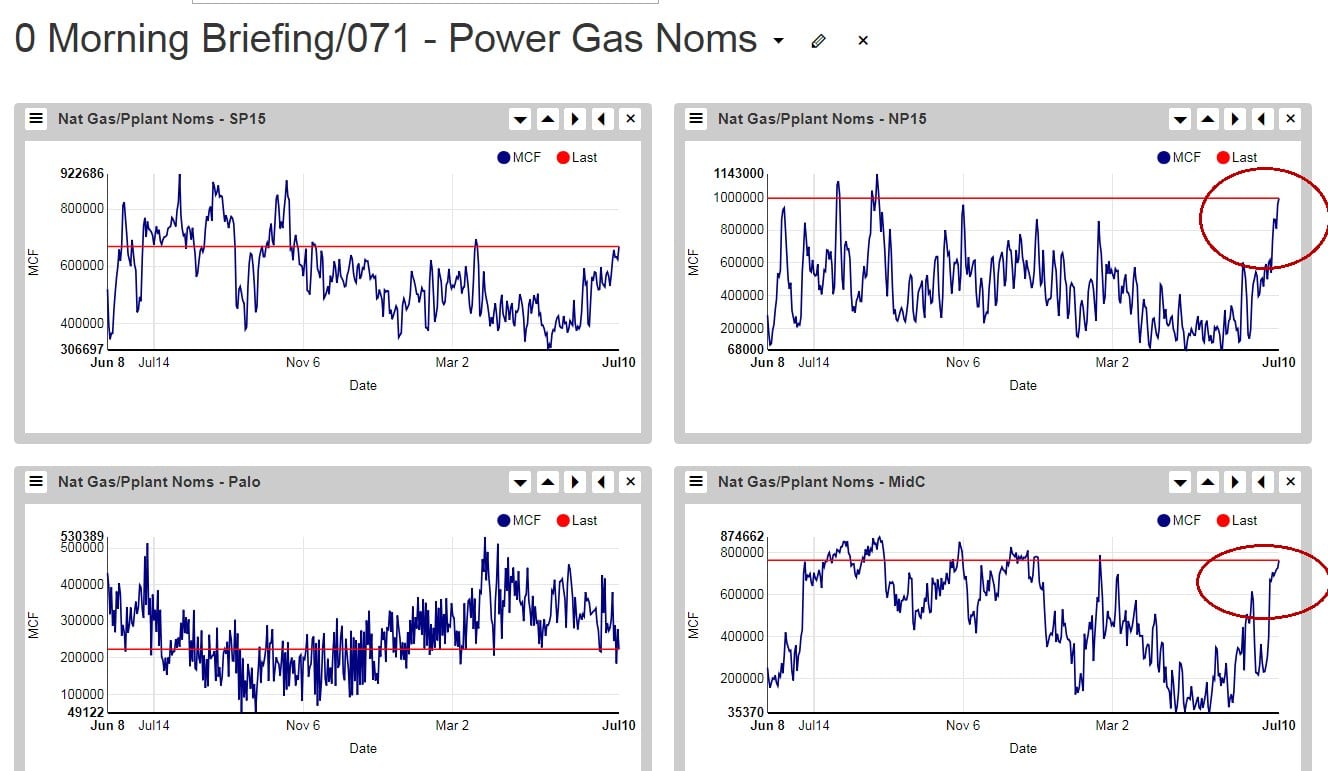 Note the huge rally in NP’s gas burn, and MidC’s, yet SP has barely returned to last summer’s levels. Though NP’s loads don’t reflect that level of gas burn, they do when you consider the amount of energy that is flowing into SP via Path 26. 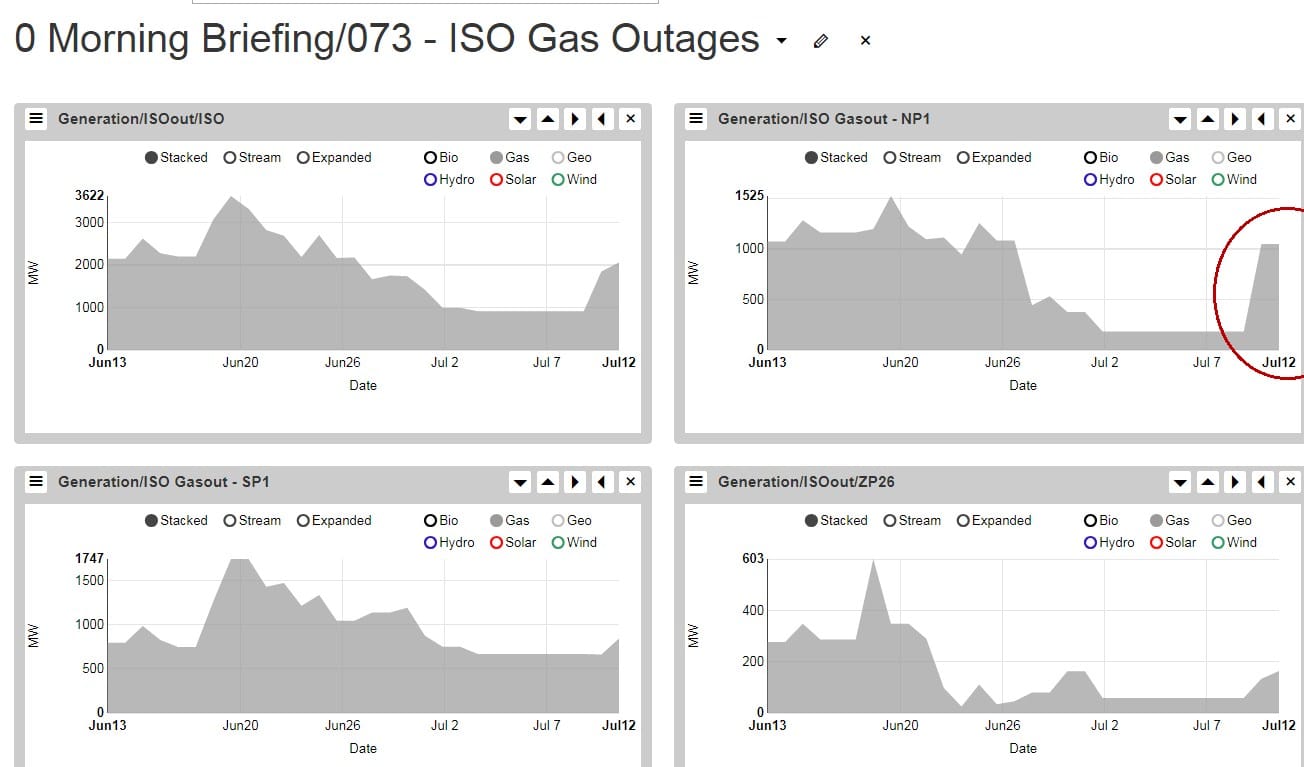 NP was the only ISO hub to show a change in gas outages. All of the change was the loss of the Russel Creek Energy Center plant:

Lake Roosevelt is full, so storage drama is over for the next six months. Shaping drama is just beginning, note the violent swings of the last two days.  On Tuesday, the plant swung 150kcfs from HE02 to HE14. All of which suggests further tightening in the off-peak markets as ever decreasing hydro is needed to meet peak loads. Remember, loads are rallying over the next week.

Arrow’s flows remain at 60kcfs while net flows at Brilliant continue to fall.

All inflows into Coulee are in freefall, but those rivers are soon to reach their base flows and won’t decline further. 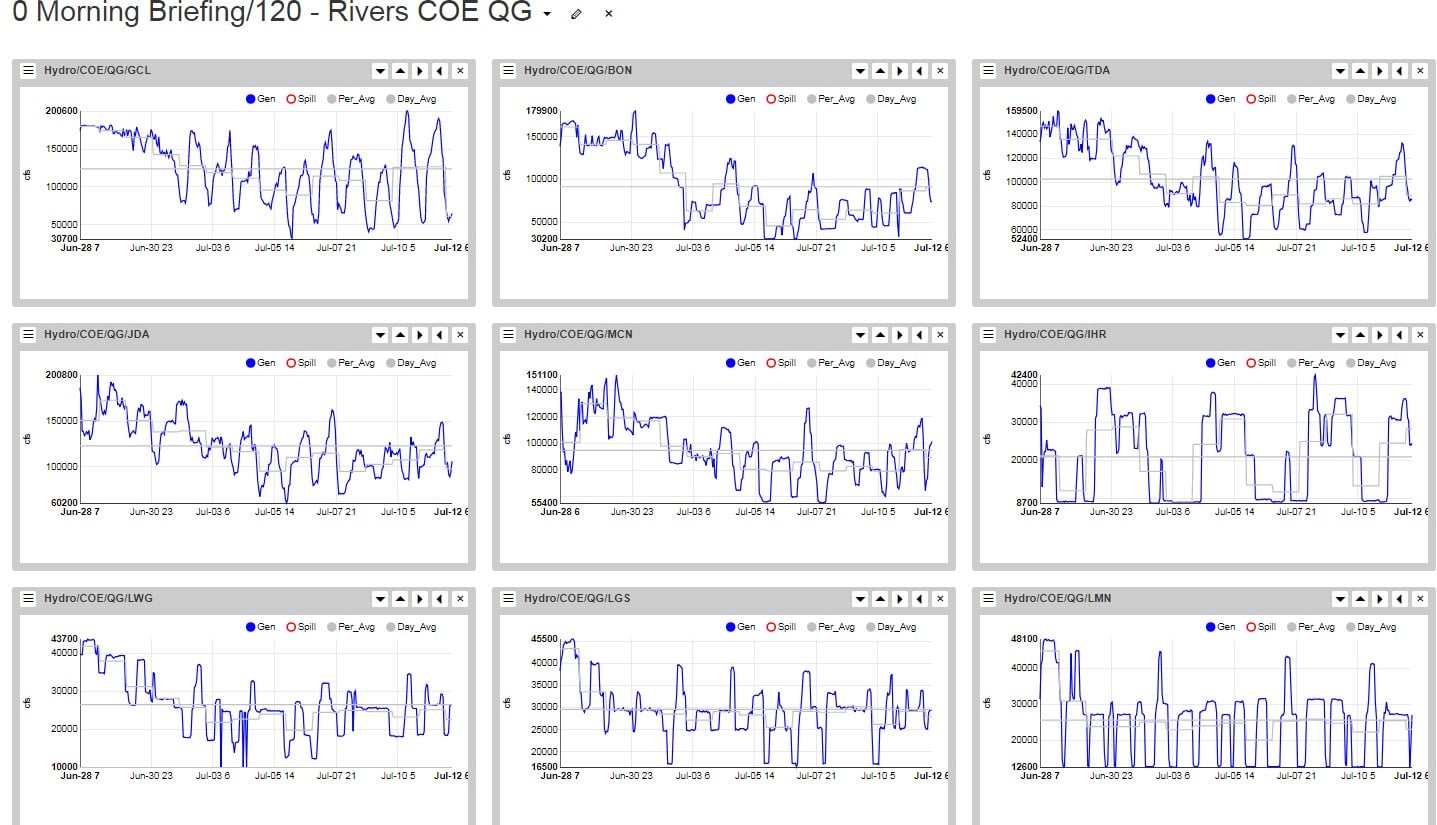 Flows on the Snake and Columbia mainstems are flat to slightly off, but we’d expect these to stabilize off of regulated flows. 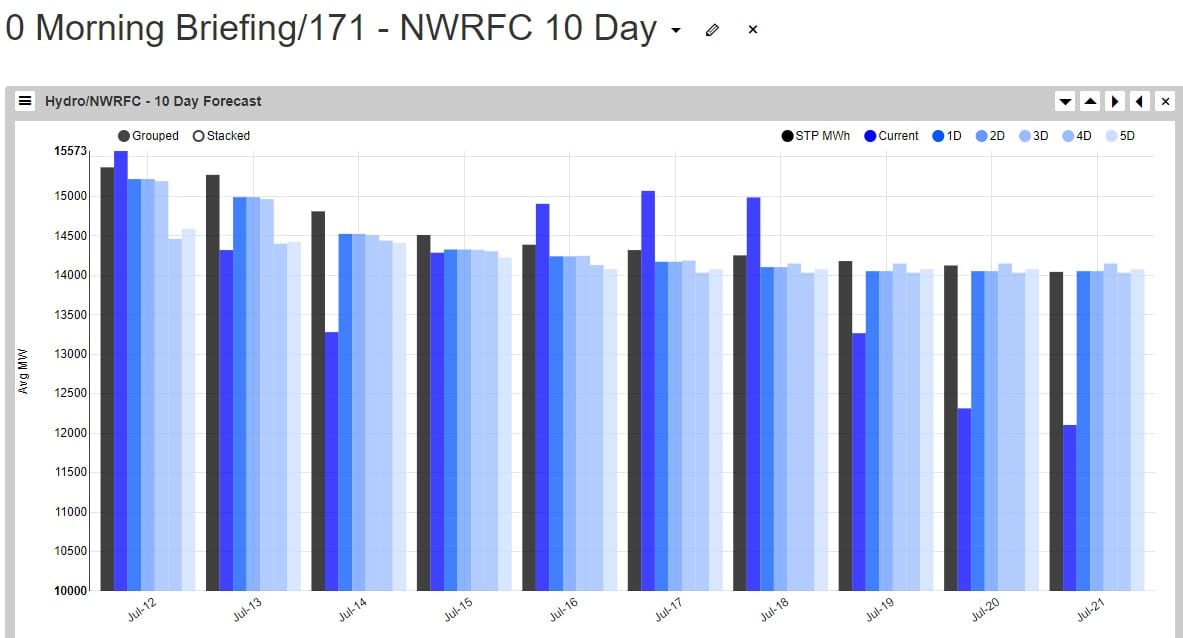 The River Forecast Center’s ten-day has some cuts in the back end, not sure if those are just shaping into the weekend, Not the general decline across the ten-day. 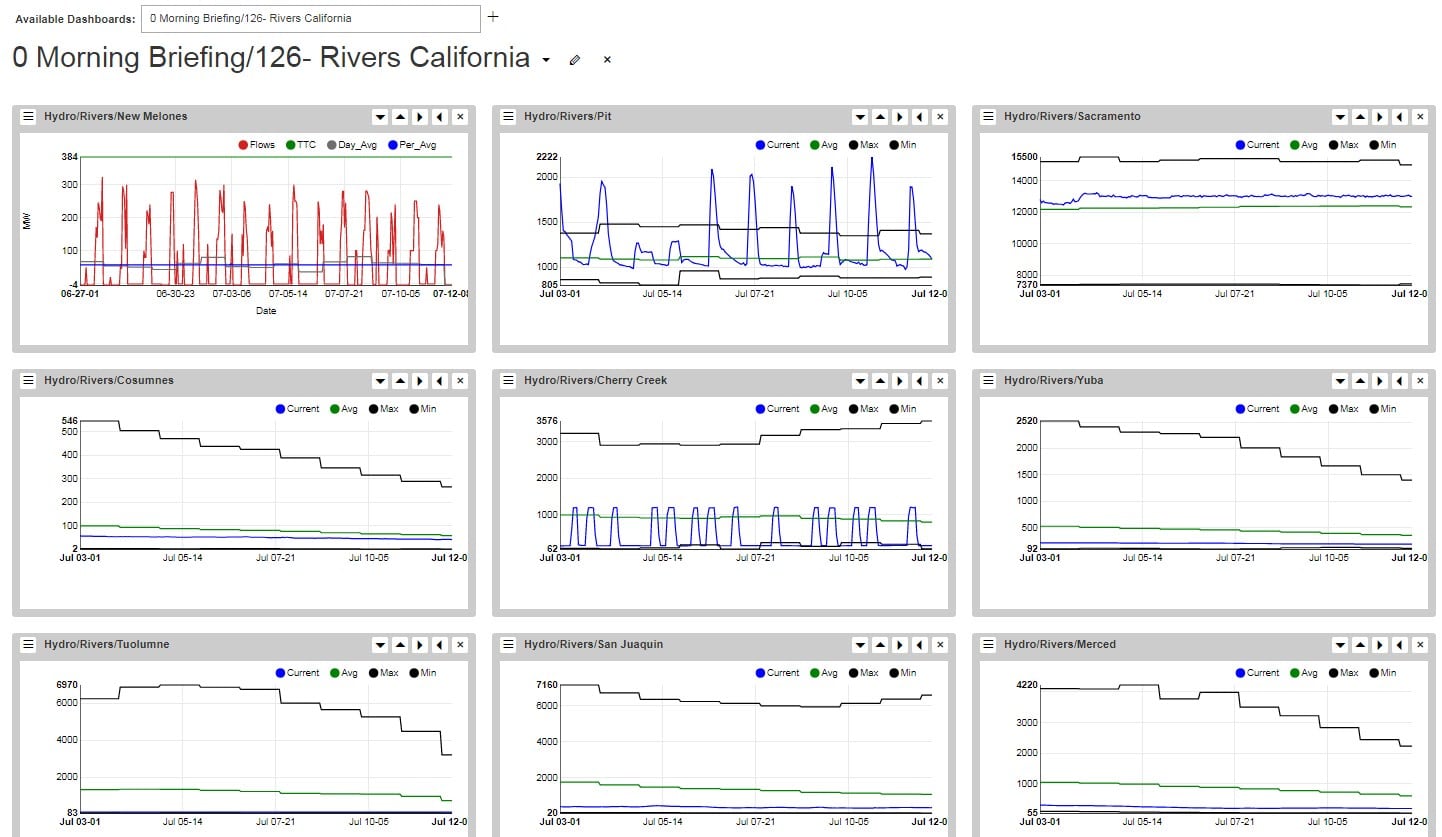 California rivers are low; most are well below normal. The Pit and Cherry Creek are shaping hard. 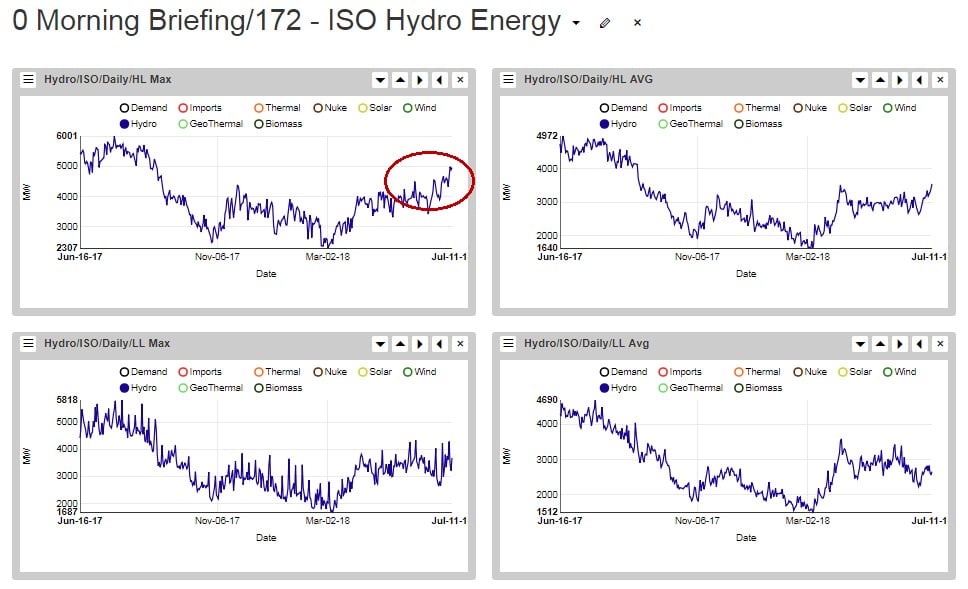 Peak ISO hydro energy is creeping up, note the steady increase in peak energy since March. This suggests firm shaping and reservoir drawdowns.

Flows from Canada into the USA are averaging over 1200 aMW and today hit yearly highs. Flows on the NOB are mostly maxed out while the COB hasn’t hit TTC in weeks. Path 15 flows are the lowest in months while Path 26 are at their highest. Even Palo is sending big energy into the ISO across all hours.

The WECC is tightening, especially at the MidC. The high-pressure systems are building which could bring extreme heat back to LA. This time, however, will be different because the rest of the WECC will be much tighter. Of course, everything is relative to price, but we’ll see stronger cash.