Our fundy takeaway suggested that the remarkably warmer weather in the interior Northwest would trigger the Mid-C’s first freshet of the season. Most likely, this freshet would not quit till the runoff was over, which will be sometime in July. We also took note of extended Southwest heat while the ISO only grew hot in its interior, the coastal cities remained milder than not. 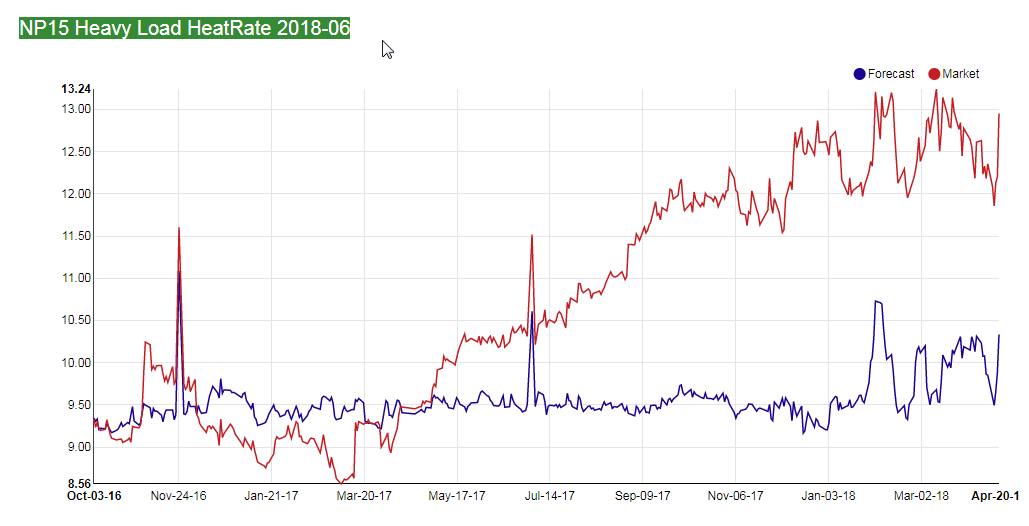 June NP HL realized a sharp spike after weeks of sell-off, we see that as a new opportunity to sell. There is nothing bullish in the near horizon for NP15, the bearishness to the north will spill into the ISO through fully loaded lines, even in the solar ramps.

Similar trade in the NP May LL, a decent rally late last week has set up new short opportunities. The AC and DC will completely fill, or ISO prices tank, should the Mid-C go baseload hydro, and prices tumble to single digits. Though many hours hit TTC, not all do, in fact, there was 1700 aMW and 1100 aMW of unused transfer capacity on the AC and DC, respectively, in April. That capacity will get used, or the ISO price will follow the Mid-C. 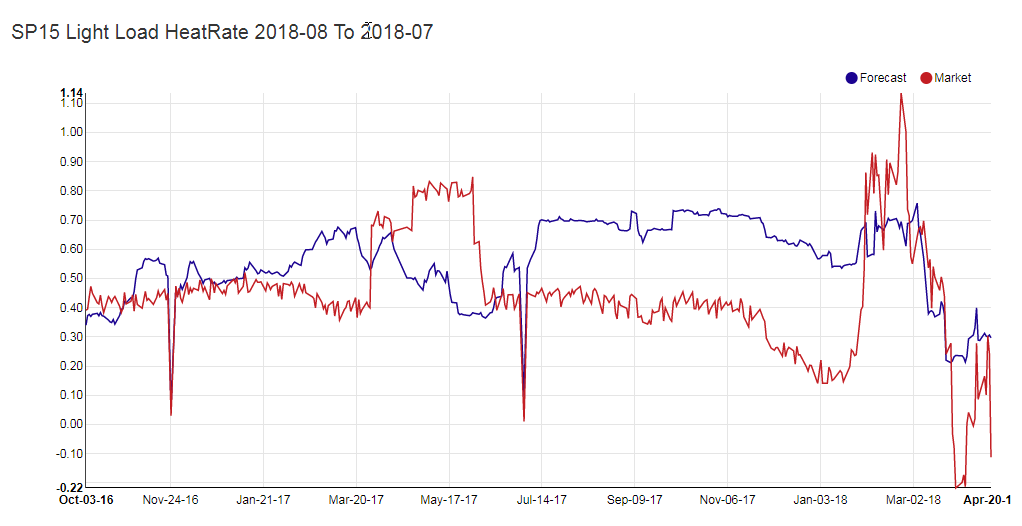 After a two week rally, the Aug-July LL roll at SP gave back most of its gains. Fundamentally, nothing changed, and now we’d be inclined to buy the roll, again. 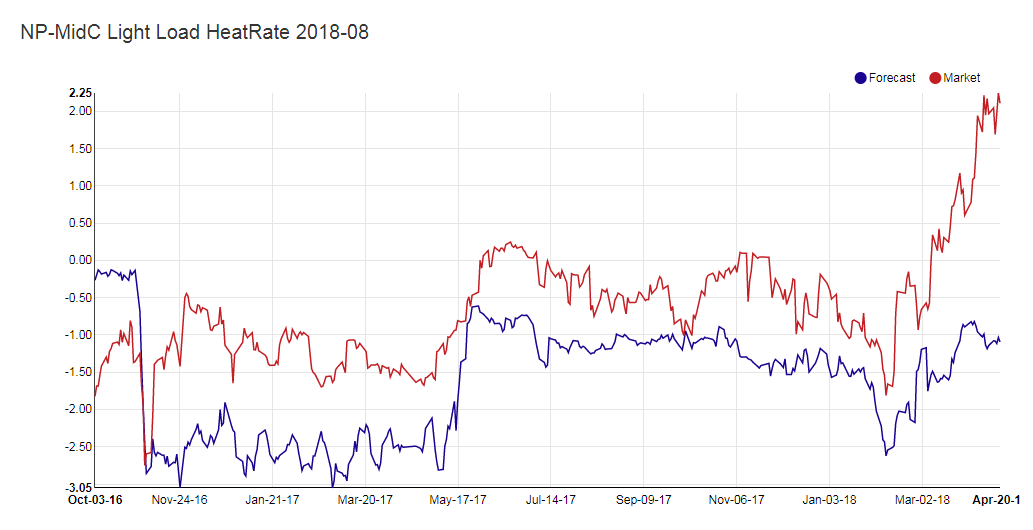 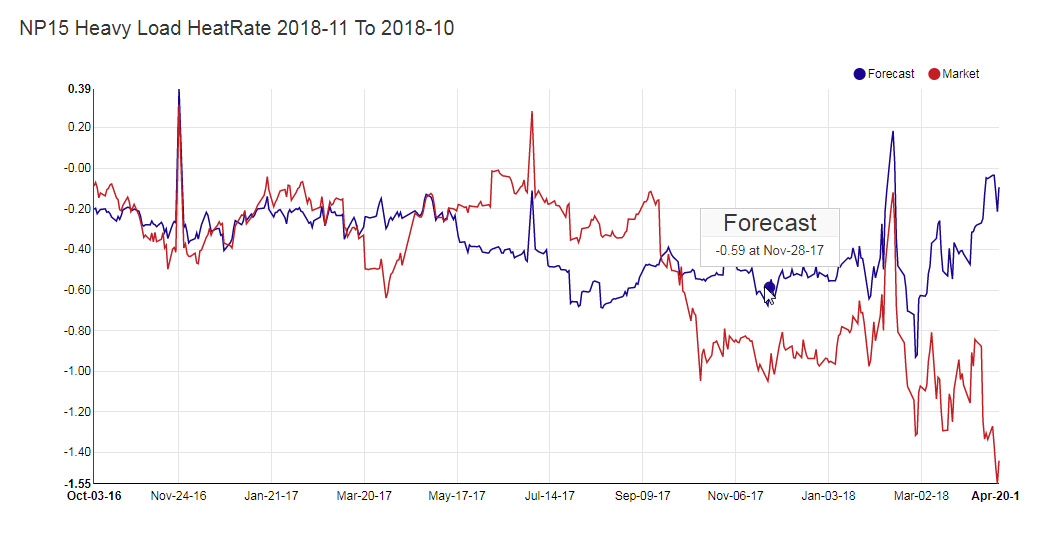 An oddity, the Nov-Oct NP HL roll, now you can own it at a contract low. We struggle to explain the recent move, other than “trend is friend” and we know whenever trend gets too friendly it becomes your frenemy. 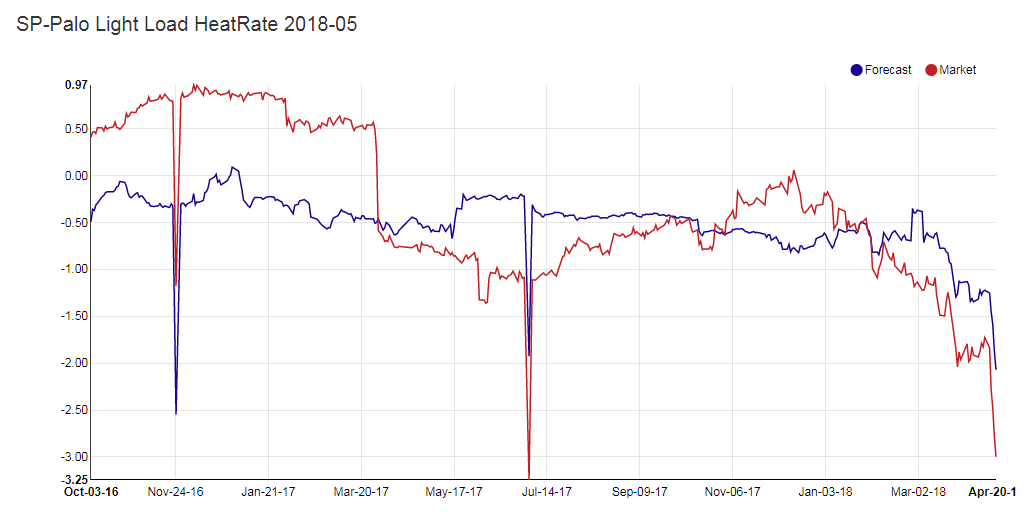 The market fell apart in the SP-PV May LL spread, now it’s at a contract low. What took six months, was realized in five days.  It would be tempting to own this just because it is cheap.

The Sep PV On|Off has bounced back to its previous highs; everytime it has been there it came back off. This is a safe point to enter from the short-side. 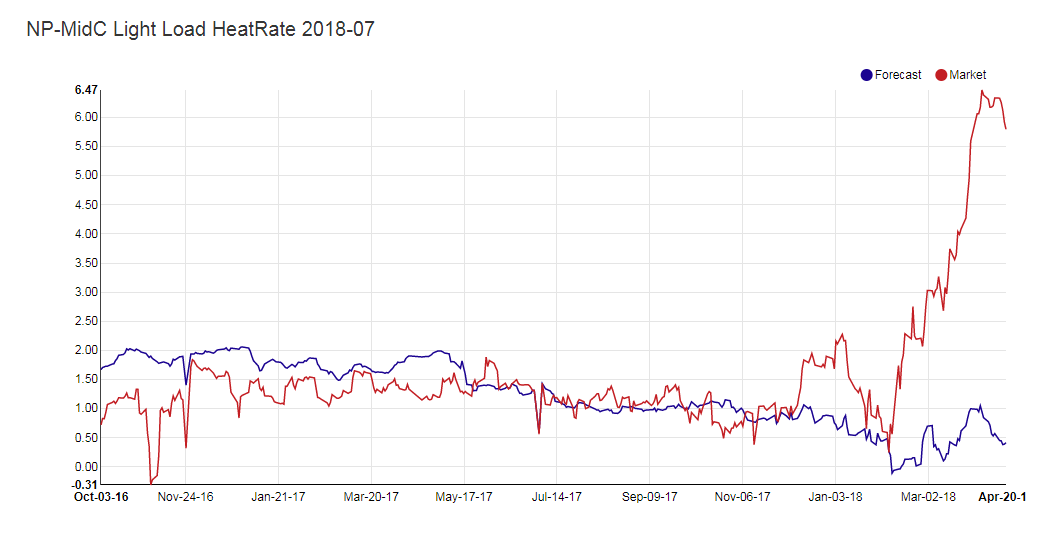 We were afraid of shorting this last week given the incessant runoff deferrals realized at Mid-C; now we see just the opposite, an acceleration of the runoff, at least for a week, and some of that water will come out of July. This is the best short opp in a month if you need to short it.

Why would a Dec NP-MidC blow out in April? Sure, huge water year, Mid-C is going to get cremated, but that show ends in August, this is Dec. Short it. 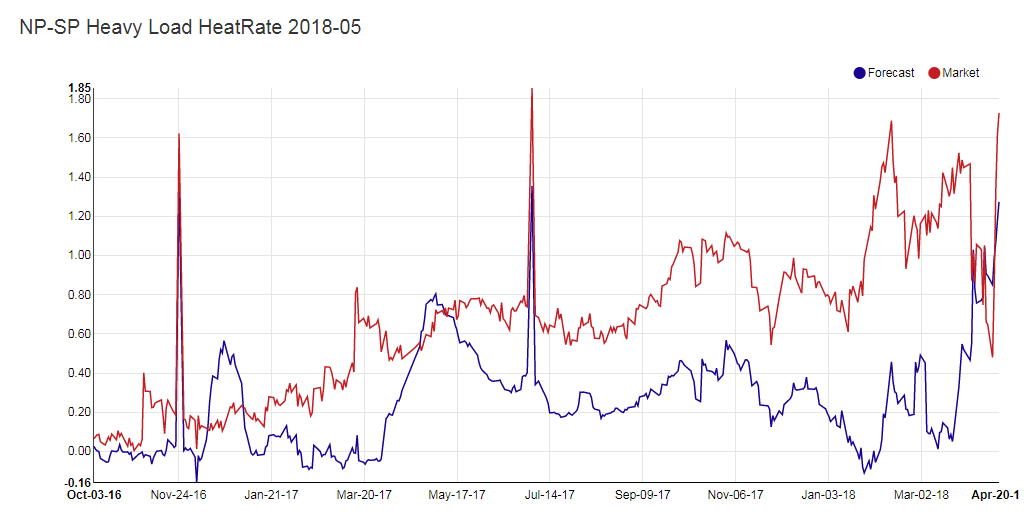 What took five weeks to walk down was reversed in a couple of days; now the NP-SP HL roll is back to a contract high. Bear in mind; this is not the worst water year on record, not even close. NP has most of the hydro capacity, why would it be trading at such a premium? 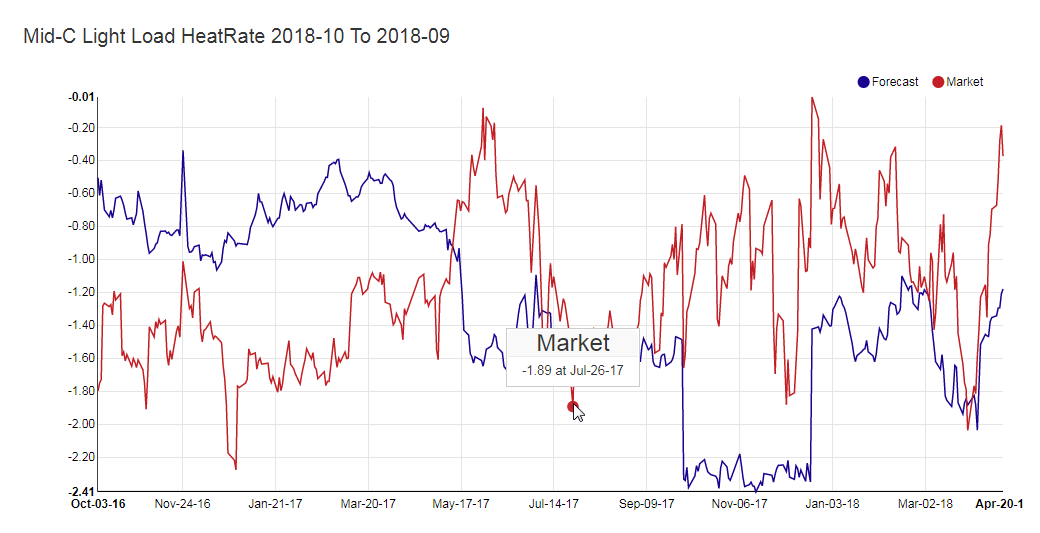 Definitely don’t get this, the Oct-Sep Midc LL roll, now back to a contract high. The DC goes to zero in Oct, at least part of Oct, and the impact of runoff is minimal in Sep. Toss in an early runoff, maybe, and this is way over-priced. 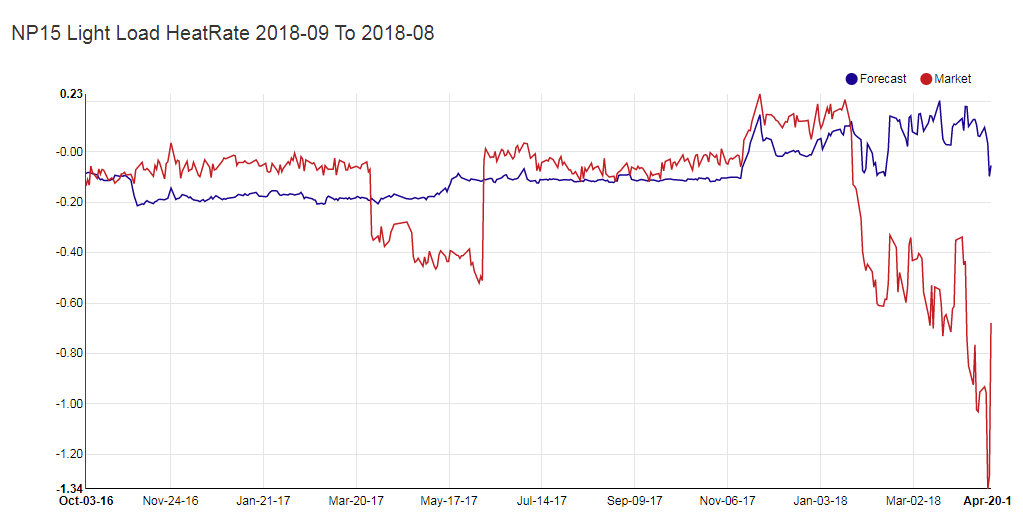 This opportunity expired and was quite short-lived; just pointing it out because of the violence of the move. 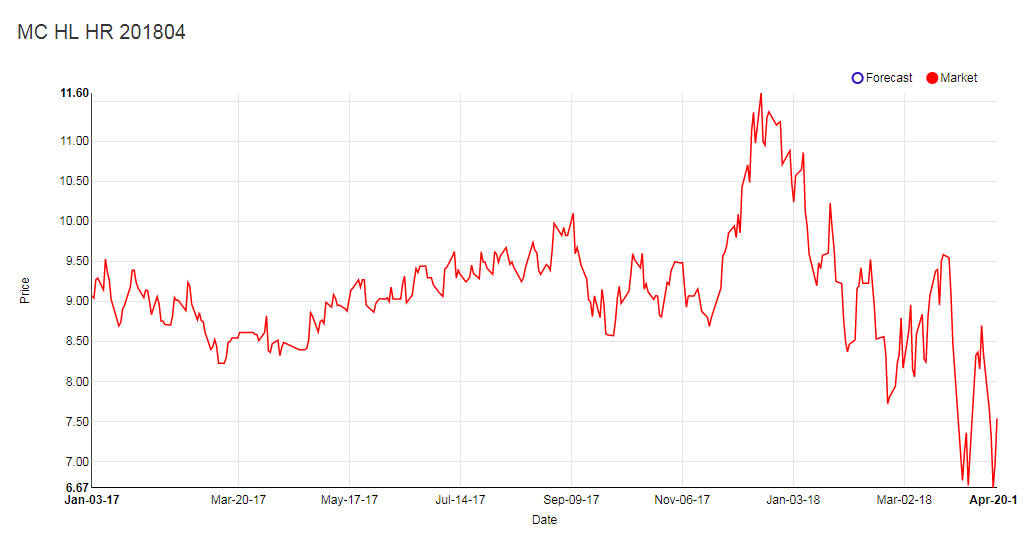 April has just a week left; this will be the last time we post on it. The heat doesn’t hit for a few more days and won’t show up as inflows to Coulee for a few days after that, leaving April unaffected. We’d be comfortable holding length in BOM. 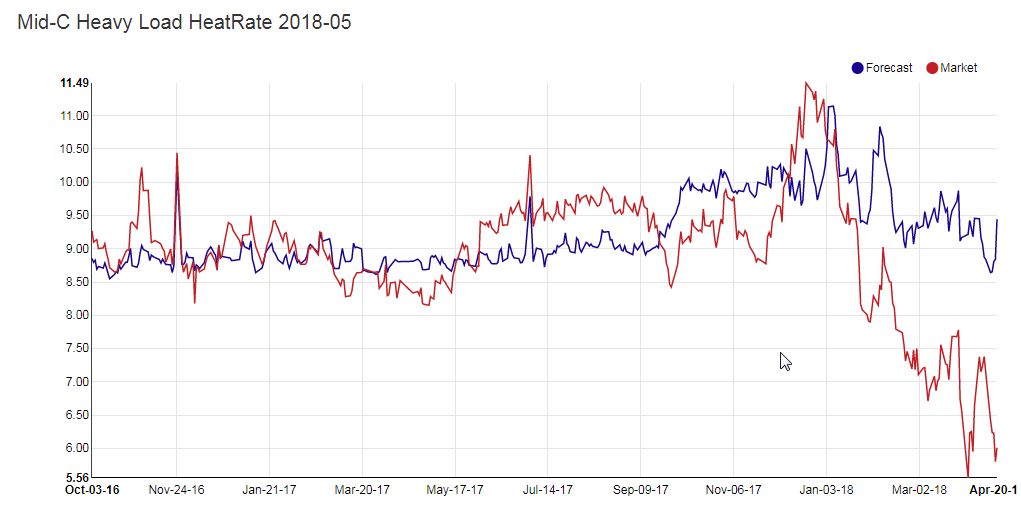 The market was smart last week, it sold off May like it knew the heat was coming, though it didn’t think it was coming, better lucky than smart, some say. Now we all know it and if I had any May length left I’d liquidate it this very second, probably even sell it short. 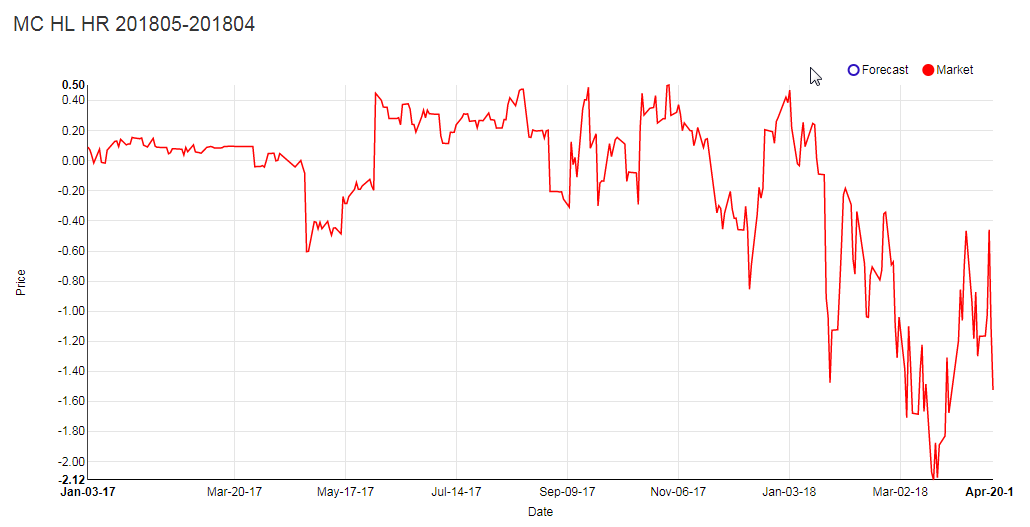 Given that I’d hang on to BOM length and short May, I’d undoubtedly sell the roll. 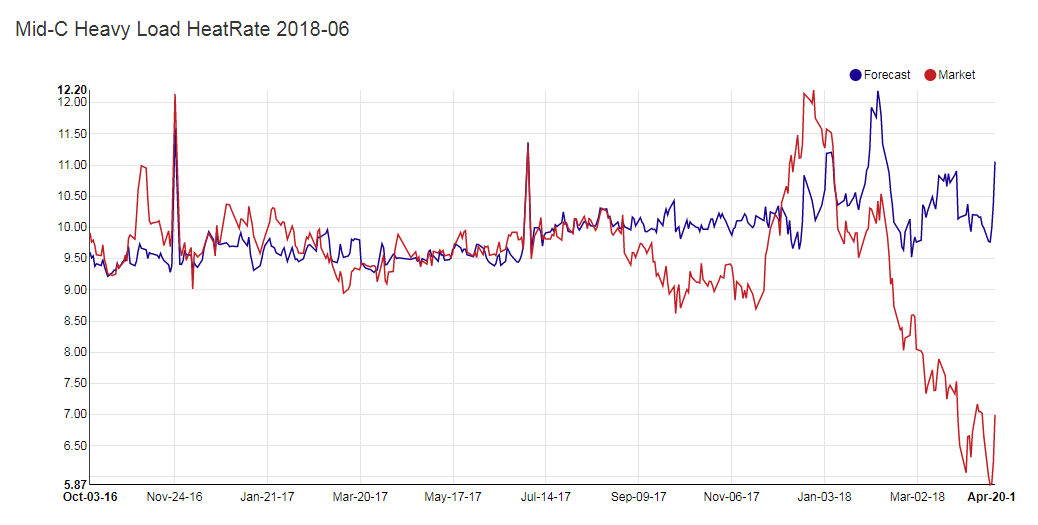 June is like Poland in WW2; no matter which direction the “tides of war” are swinging, it’s going to get smoked. This headfake rally is an excellent point to jump in for some new shorts. 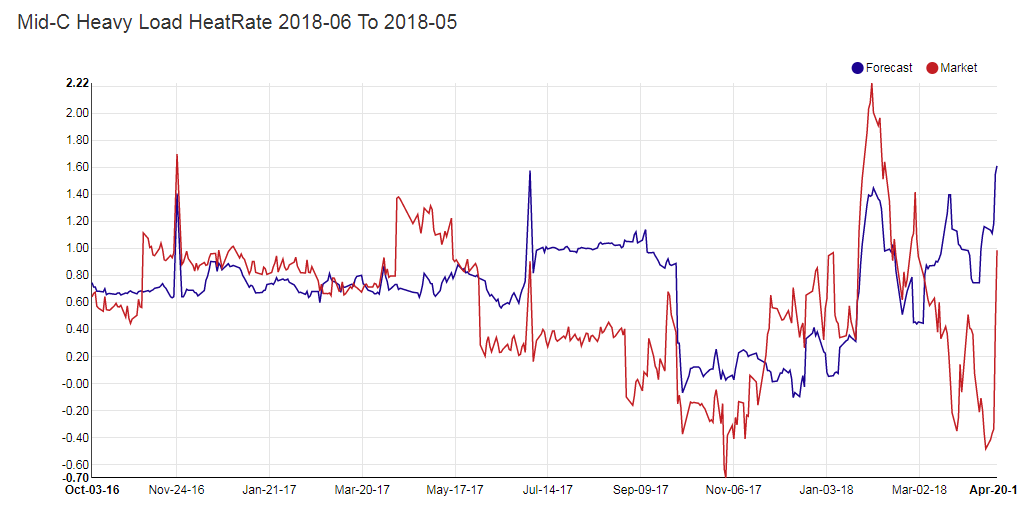 I’d fade any big move in this roll, now its back to parity but I’d be a bit more biased towards owning the May over the June. My fear would be BPA overfills in May leaving no room in June.  The opposite could happen, remember the drum gate project, they cannot take the reservoir above 1255′ until May 15 or so. If inflows are big, which we think they will be, BPA might find itself forced to dump water that second week of May.

July rallied and with the late April-early May heat, it should rally some. I’d stay short the July, however, given that Mid-C HL dailies will trade single digit sometime this summer, maybe next week? When that happens, the downward pressure on Mid-C term might be overwhelming. 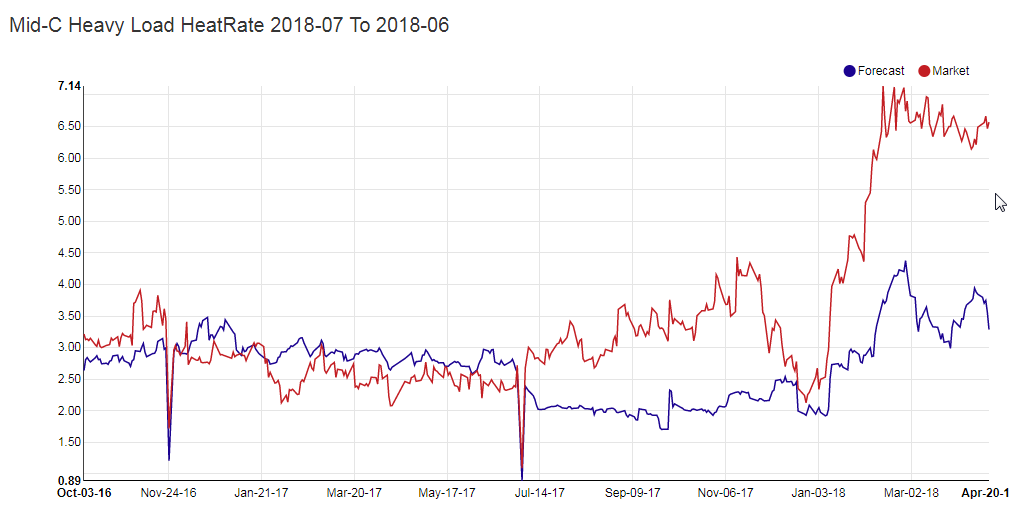 This roll got more bullish with the early heat; we’d be more buyers than sellers.

Any chance of runoff spilling into August just got lower with warm April weather. A return to cold puts pressure on August, continued warm releases that pressure.

The roll has come off over the last two weeks; we’d be buyers. 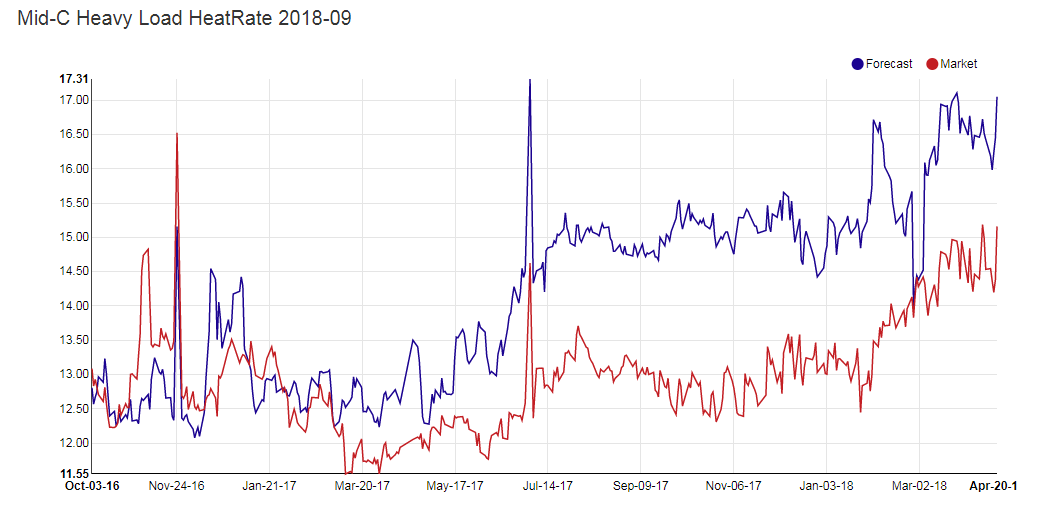 Sep is high, but only because the ISO is off the charts high. I’d be inclined to short this and hope to see single digits in cash and watch all things Mid-C melt away. 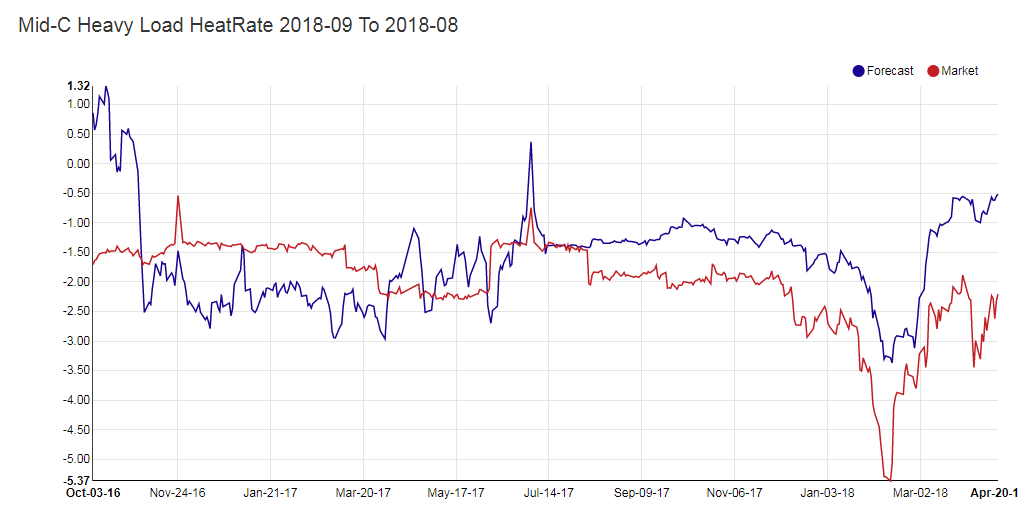 Cold spring increases the value of this roll, warm spring just the opposite. We’d sell it. 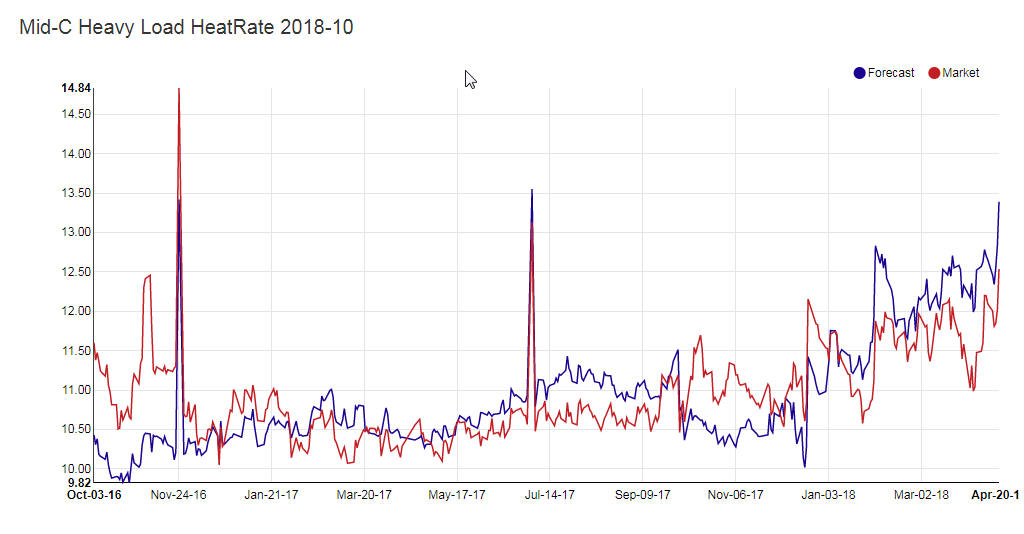 Why both trading Oct when its April and there is much more volatility in the front? However, if you forced me to take a side, I’d sell it because of the cash factor. 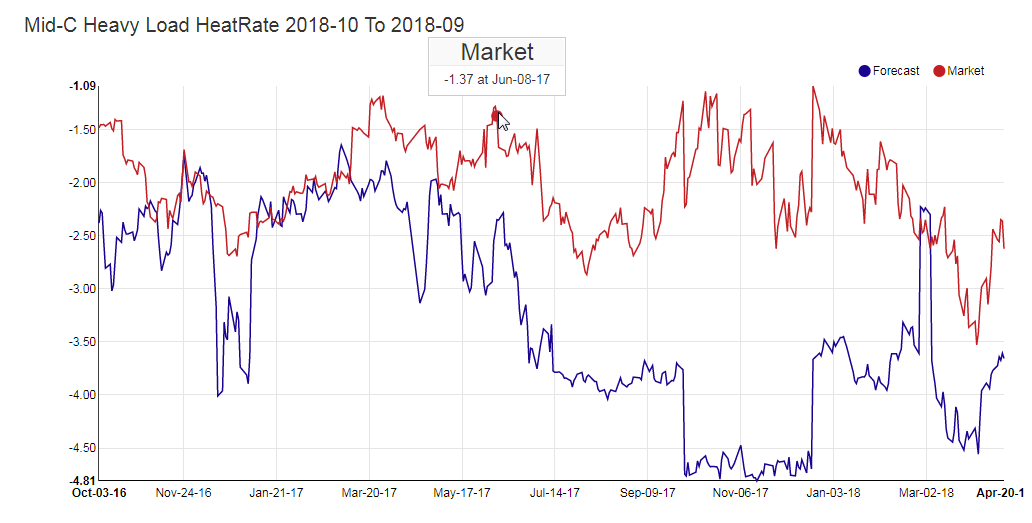 We looked at the LL earlier, and have the same sentiment for the HL; we’d own the Sep over the Oct.