April is half over but seems like its “Fools Day” every day. The Northwest BOM is relentlessly strong, despite the many pundits who said “big snow = little price.” Usually, pundit, that is a true statement. However, you also need to add one more component to that equation – gravity. You see, without big snow becoming big water price doesn’t become little. To make big snow = big water we need big temp, and now we have little temp.

Let’s look at MidC BOM before we delve into the forward-looking fundies:

Both the LL and HL are up over $5.00 in just a few days. The reality of Spill and no natural river flows has set in. At the same time, the snow has gotten bigger in most Northwest locales.  More on all of this market stuff in a later post.

An unremarkable ISO DA and HA market. Prices are sideways; there isn’t even any congestion. 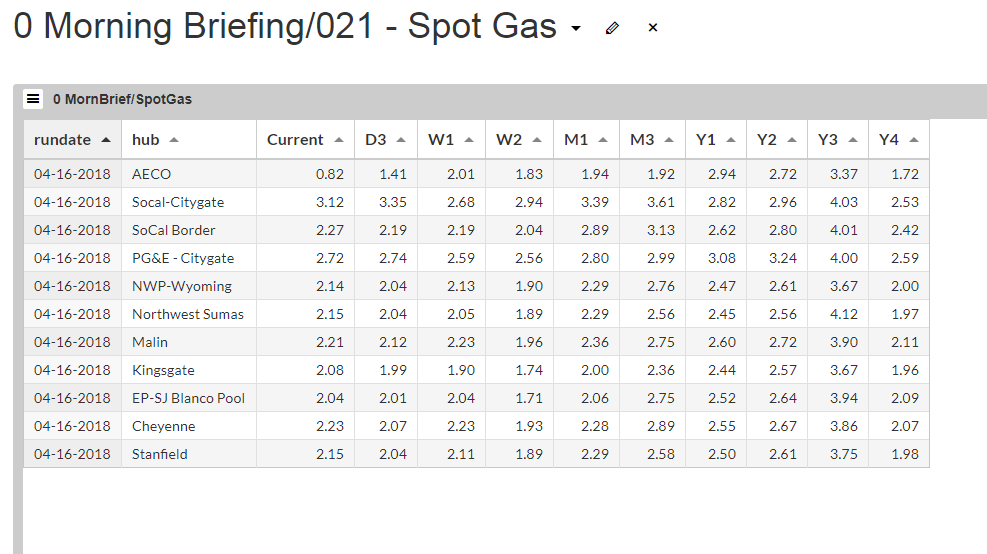 Blame some of that stability on a stable, though slightly bullish, spot gas market. We suspect the Northwest Basis traders were caught by surprise at the April strength, but they shouldn’t have been. 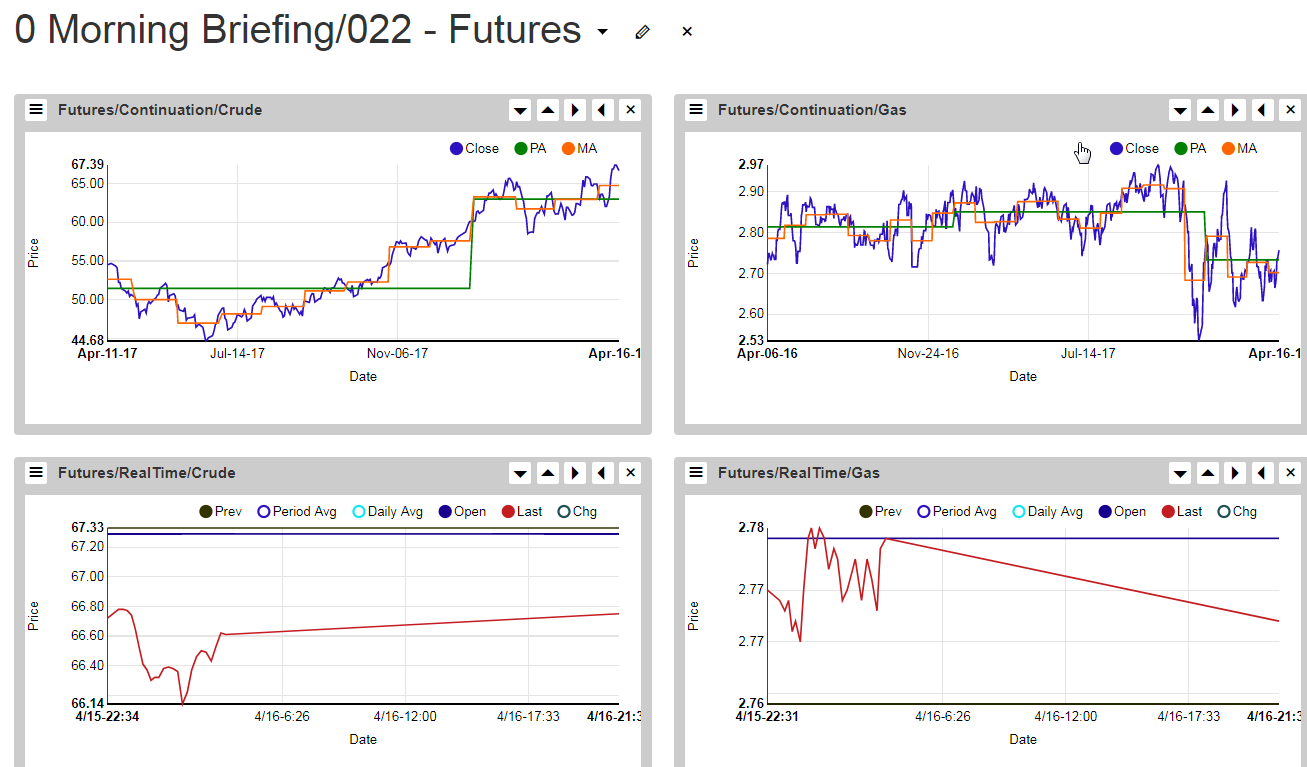 Nymex is crazy bullish for crude, and even natty has a rally. Probably most of that spot bump, week-on-week, came from the natty pop. 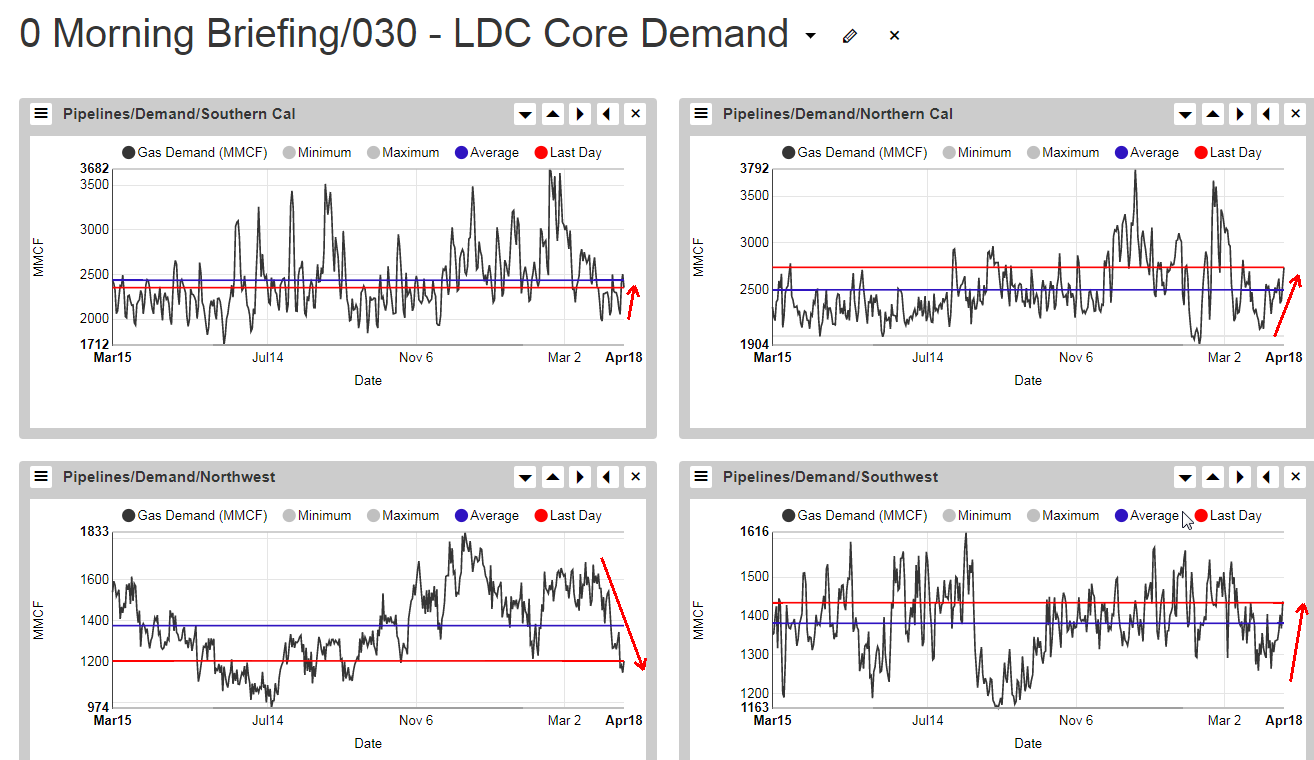 The Northwest has seen a steady erosion in its LDC gas demand index, while the other three zones have seen slight rallies. 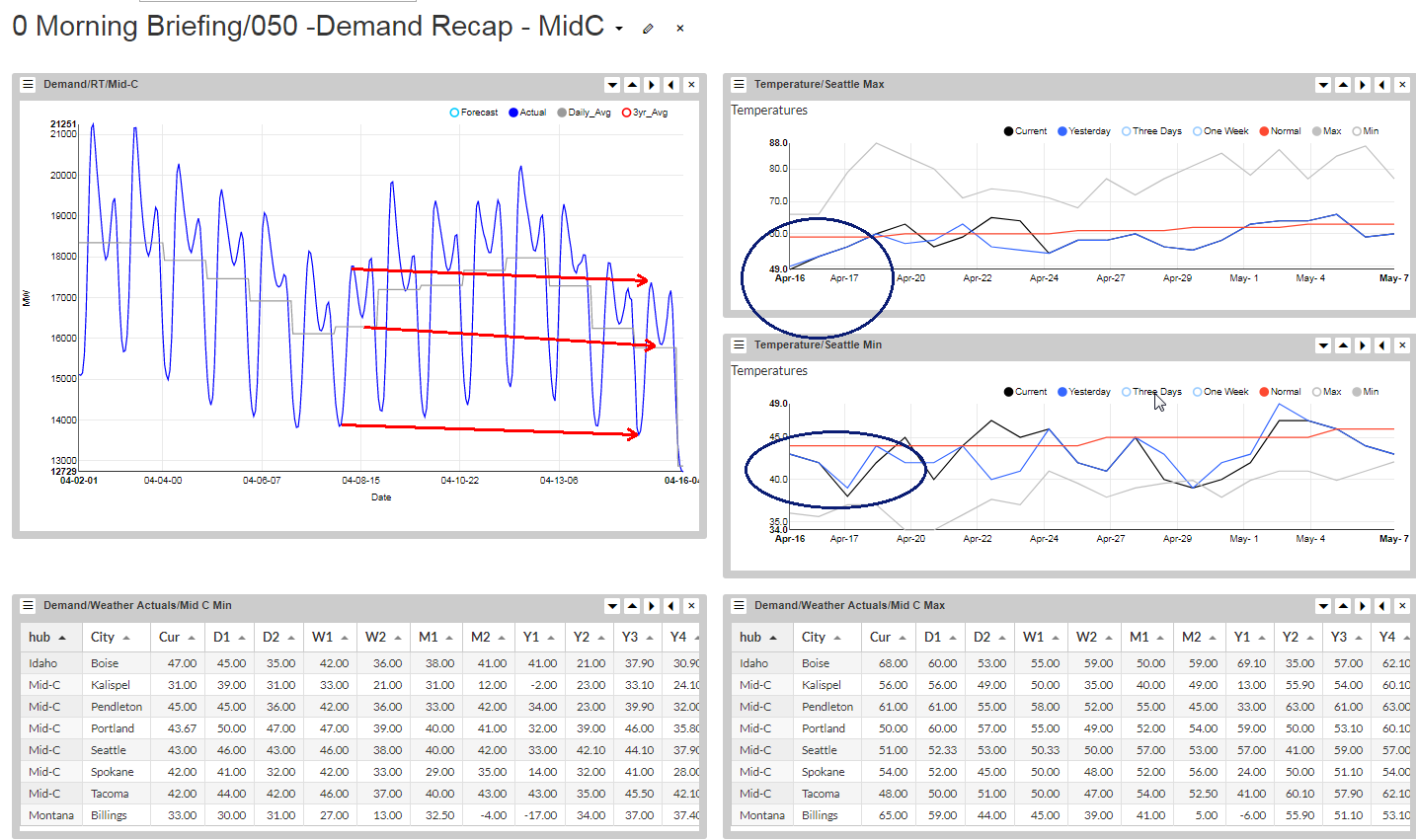 Temperatures stay below normal for most of this week, that will keep upward pressure on loads and will also keep the snow on the mountains. Since the timing of the runoff is now the single most important “event’ in the WECC, we’ve dedicated a dashboard to help monitor it.

This object looks at Min/Max for Kalispell, Spokane, and Boise. The first two have Mins at or below freezing, and their max is at or below average. Boise shows signs of starting the Snake freshet given its lows are well above freezing and its daytime highs are in the high 60s-low 70s. We’d expect ever-increasing flows on the Snake. 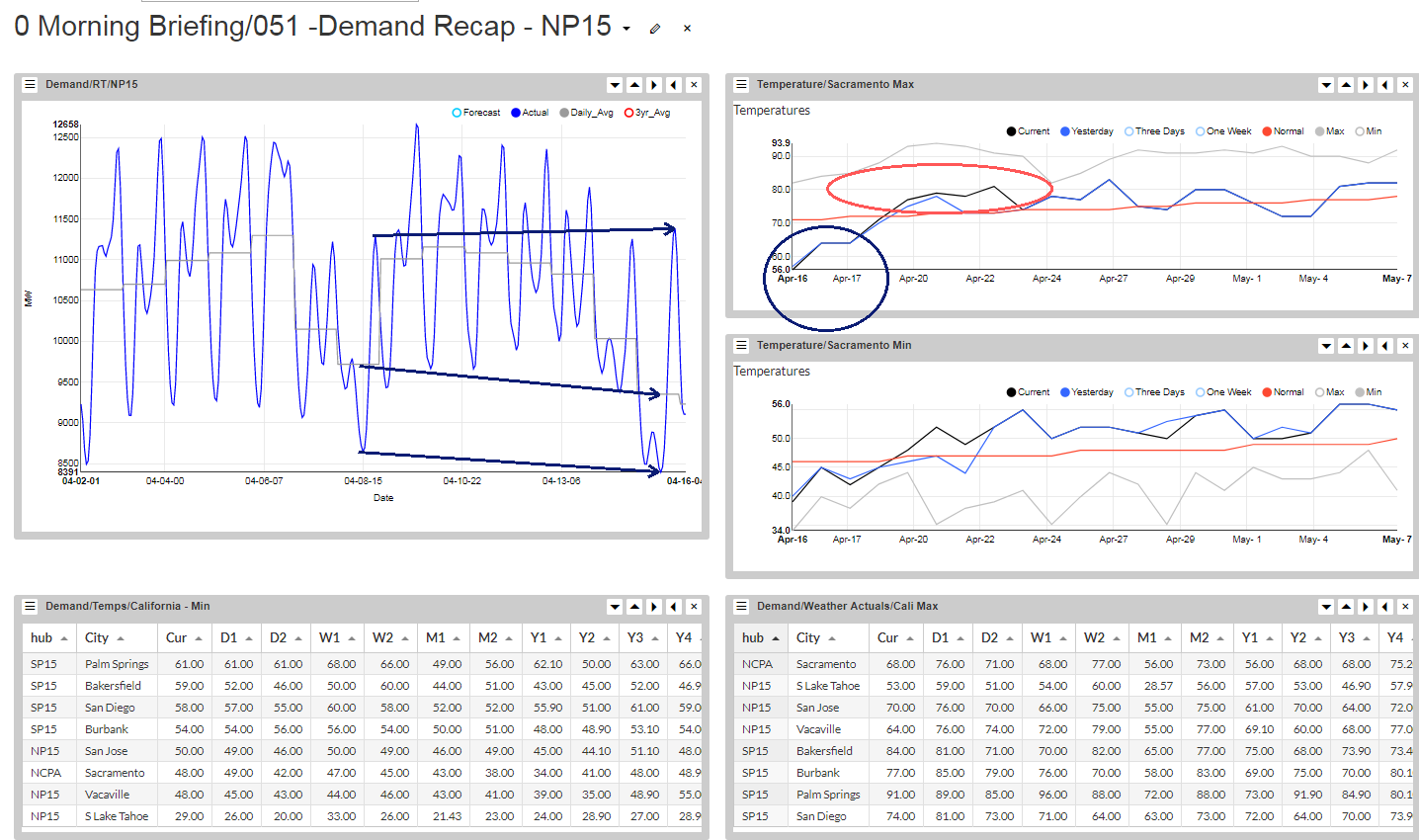 NP saw its average loads drop, week-on-week, but there is heat on the near horizon, and the hub should tighten up later in the week. 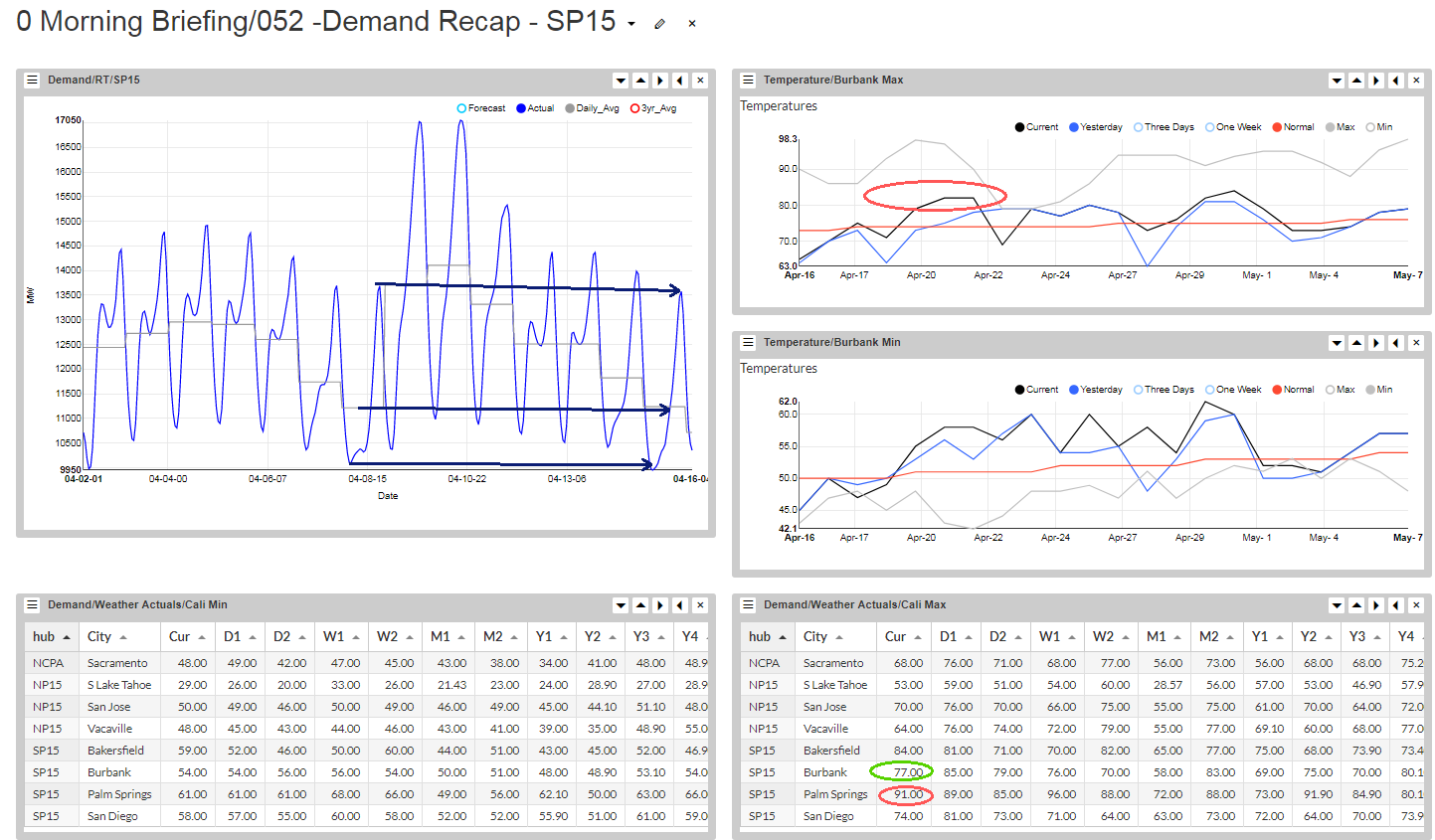 SP’s loads were sideways, week-on-week, and it too, like NP, has some heat arriving in days 6-10. 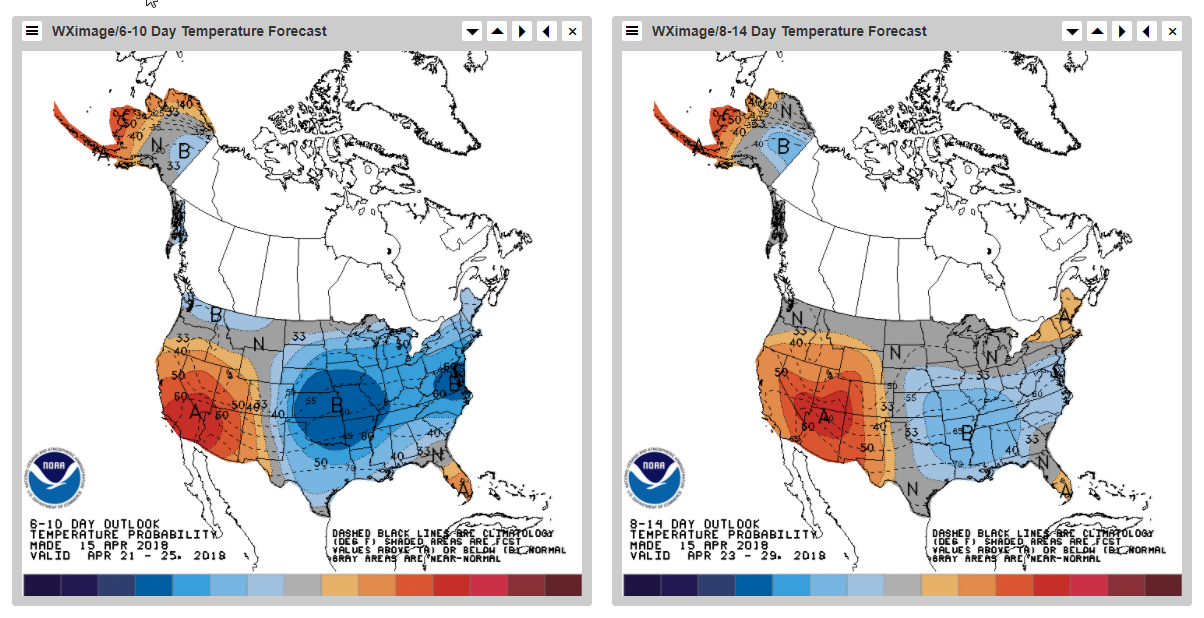 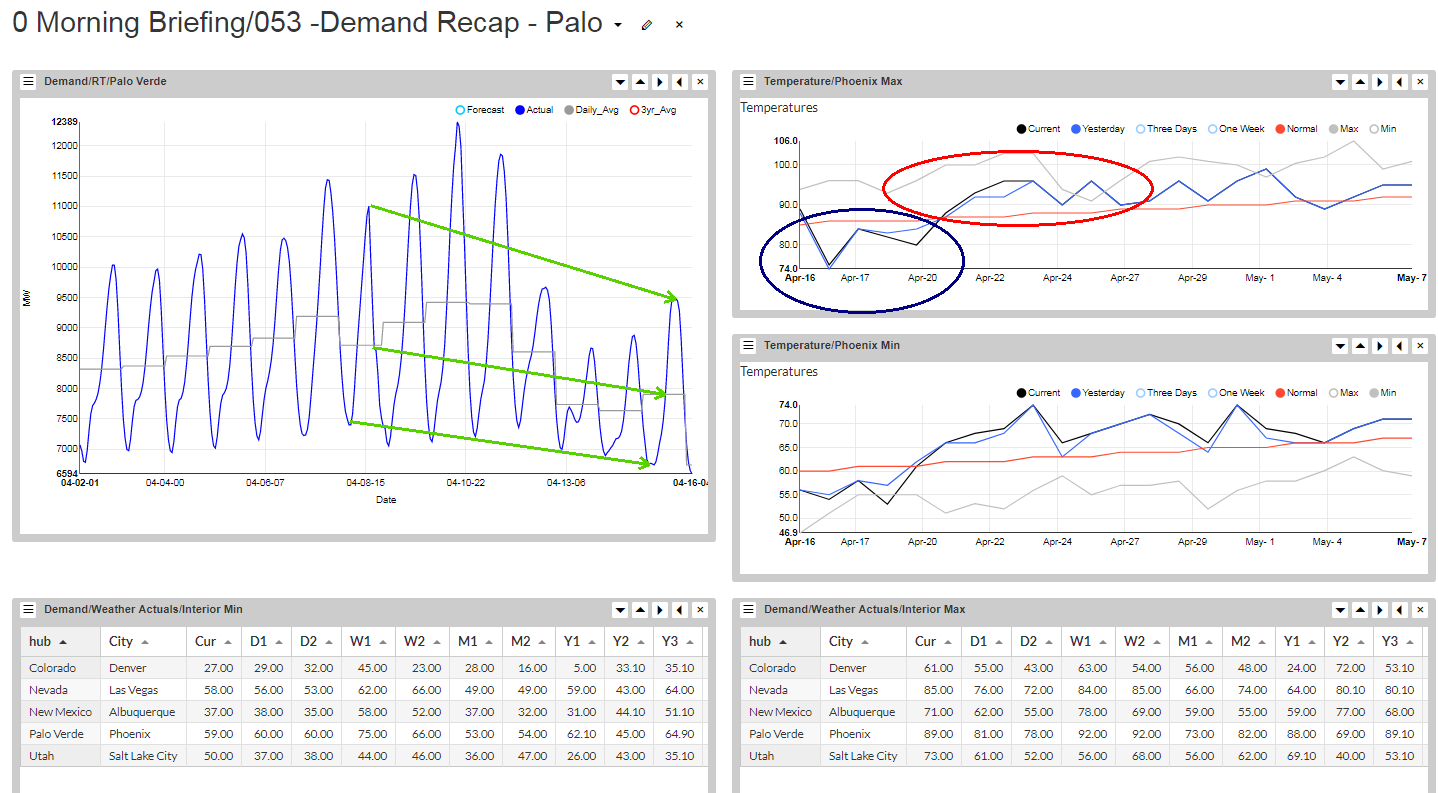 Loads are way off at Palo and will stay down most of this week, then new heat arrives and those levels (loads) seen last week will be re-visited. 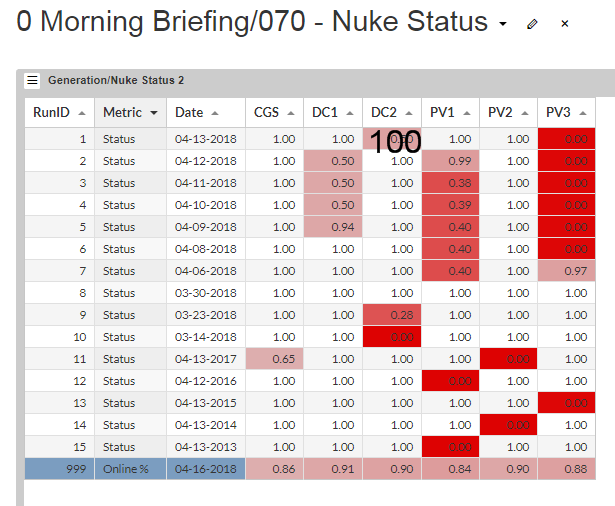 Despite the busy looking table (above), there is only the PV #3 that is offline; Diablo #2 returned over the weekend. 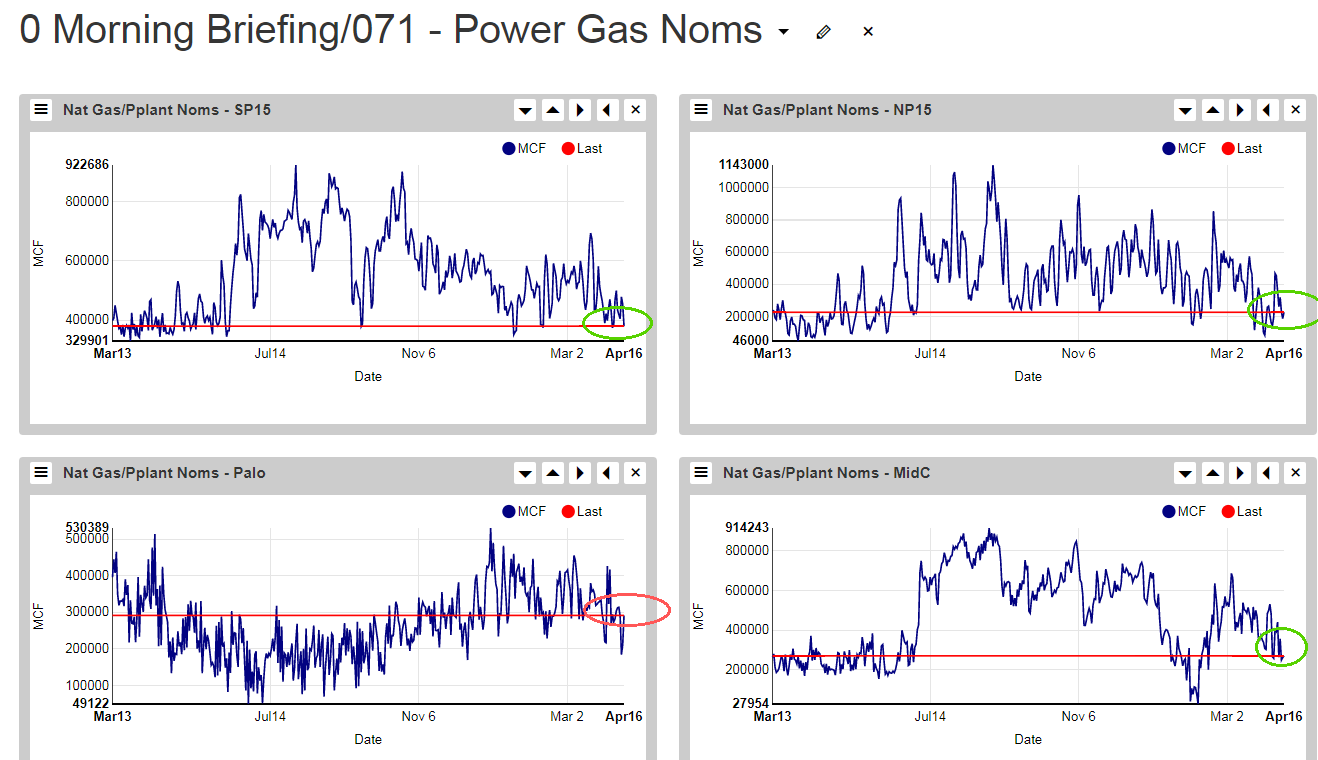 Renewables were strong over the weekend; the Solar was mostly base-loaded; the wind was spotty when isn’t it?

This is one of the dryest Northwest forecasts in months – Seattle just 0.20″ in ten days! Not that it matters, the damage is done and is sitting atop the mountains. 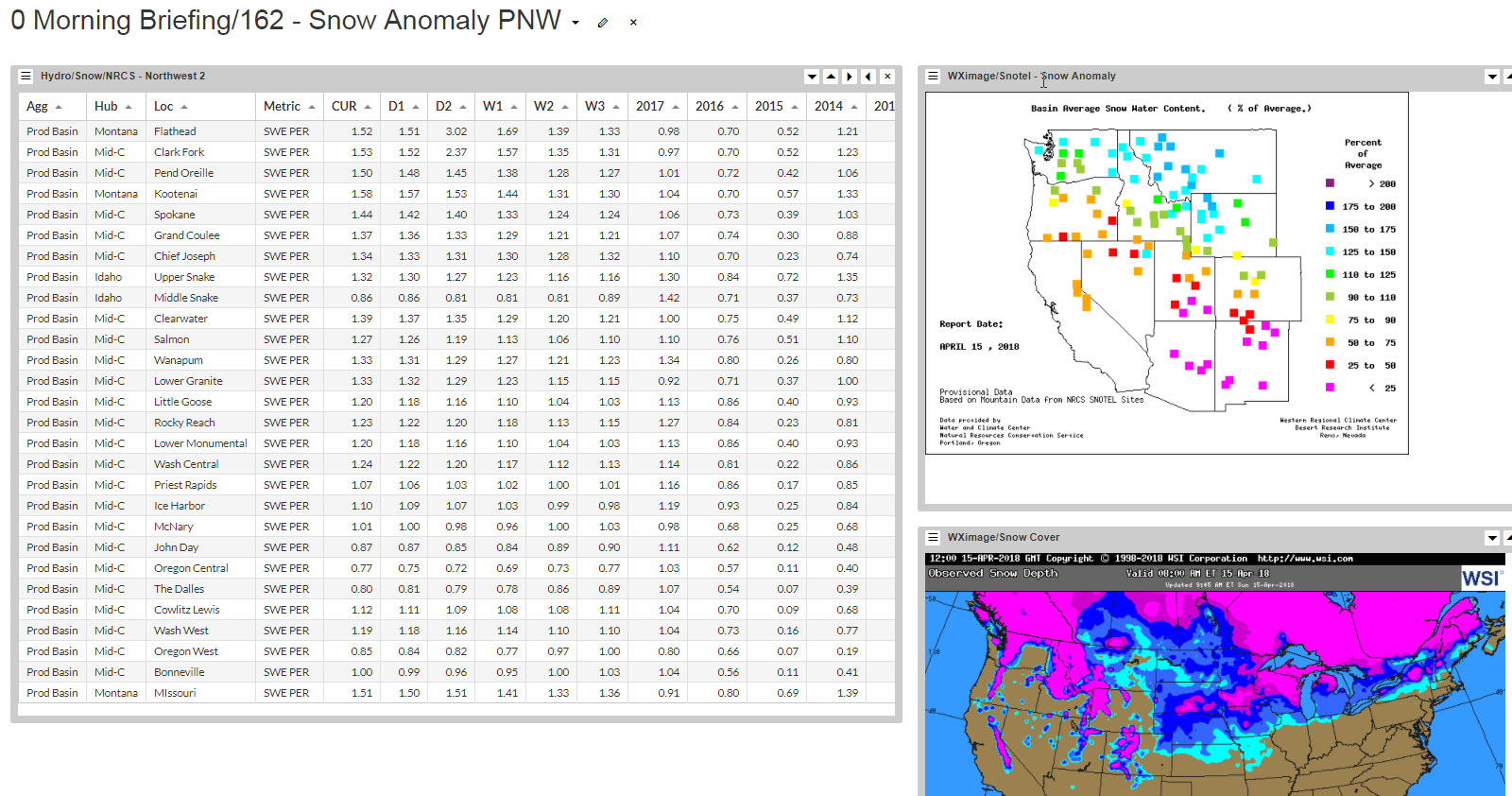 The snow levels above Coulee are literally off the charts and when the melt begins it will seem like it will never end. But it hasn’t started yet on most rivers, though the Spokane has already started its freshet: 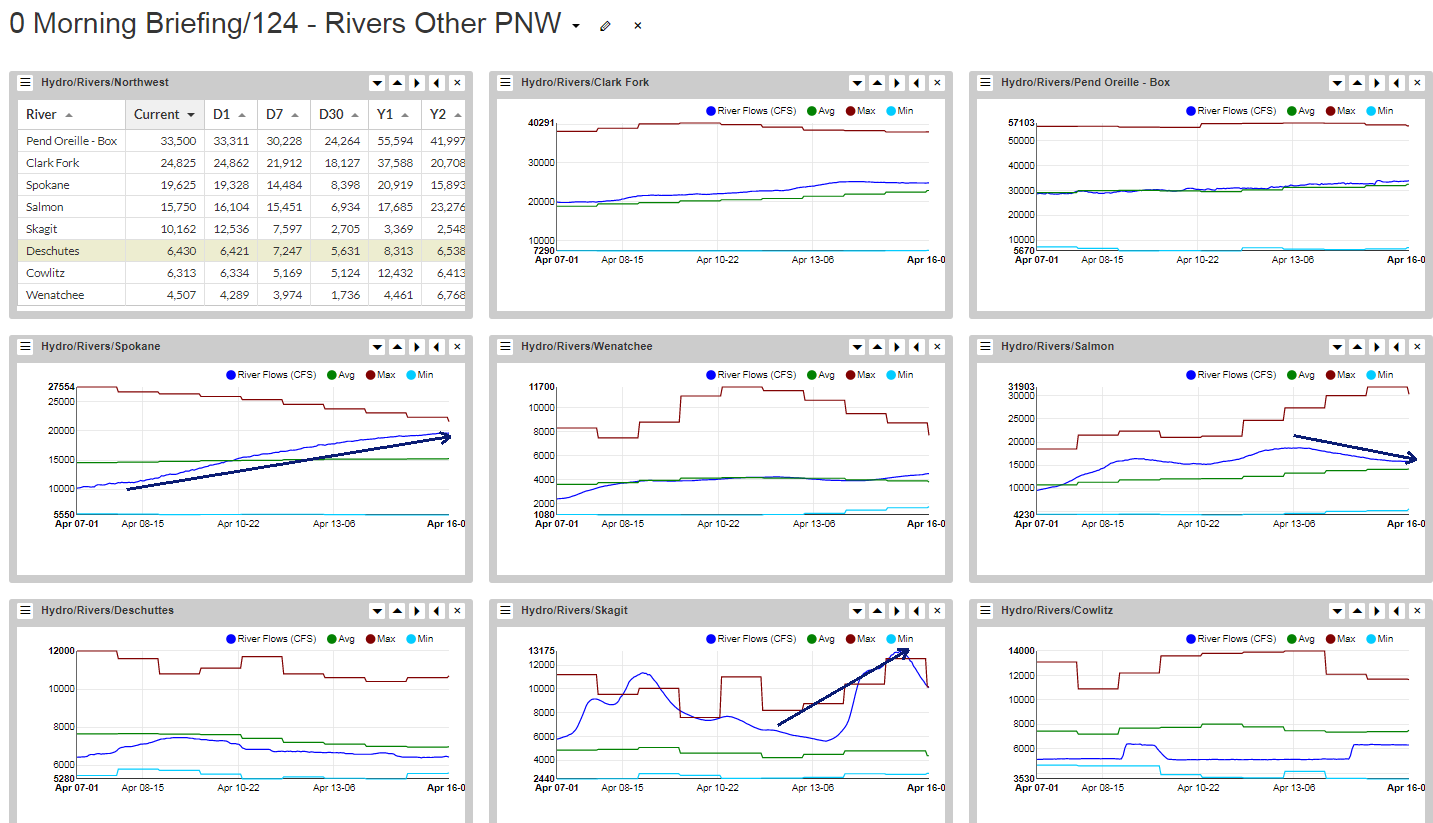 That river is an early warner of runoff given most of the mountains feeding the Couer d’Alene basin (which feeds the Spokane) are lower elevation.  Last year this river peaked out at around 40kcfs:

The river is typical of all above Coulee. Massive snow, delayed start; all of which means strong flows well into July, perhaps August. 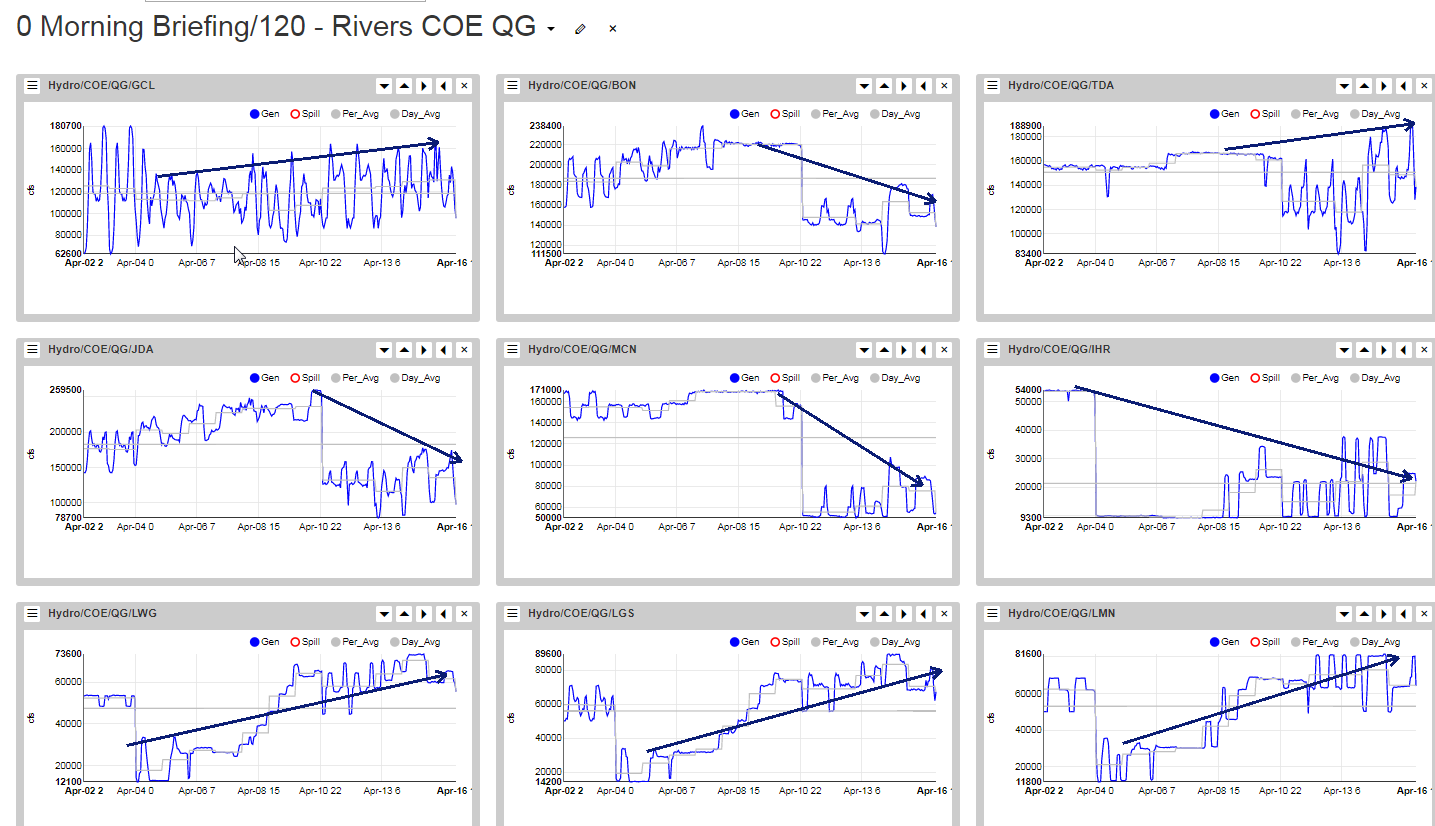 Most Corps projects have seen net flows cut, but that has more to do with Spill than anything else: 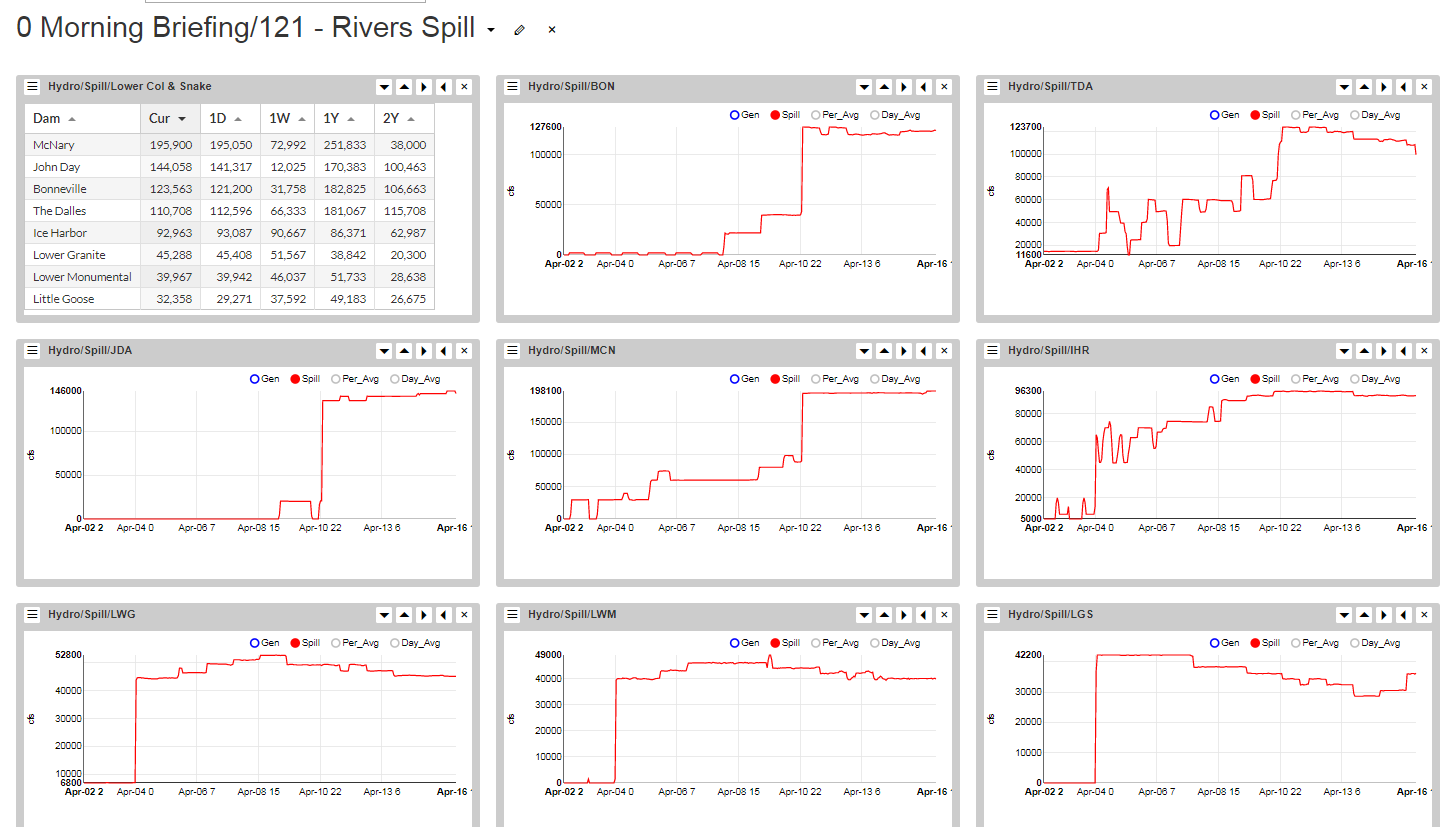 The 2018 spill has been fully implemented, but these levels will go up as inflows increase.

California reservoirs enter summer nearly full, with a decent snowpack in the Sierras, there is no reason not to expect these to be full. The Northwest and BC’s reservoirs are near record lows, but that is to be expected given both region’s snow levels are near record highs. 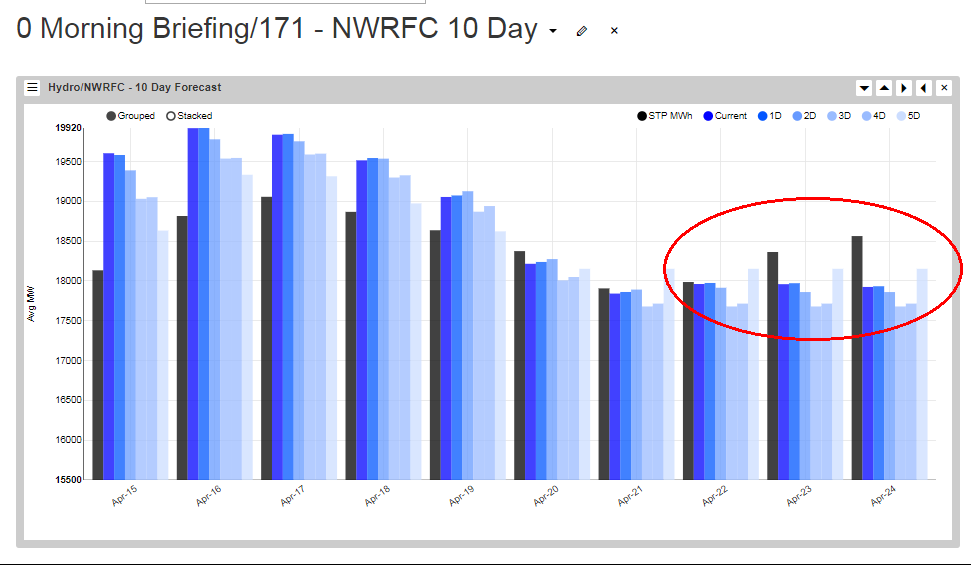 Today is STP; we think the total net water will be increased given that snow levels increased. We’d also expect much of that bump to occur in July-August, though wouldn’t be surprised to see May and June jacked as well. 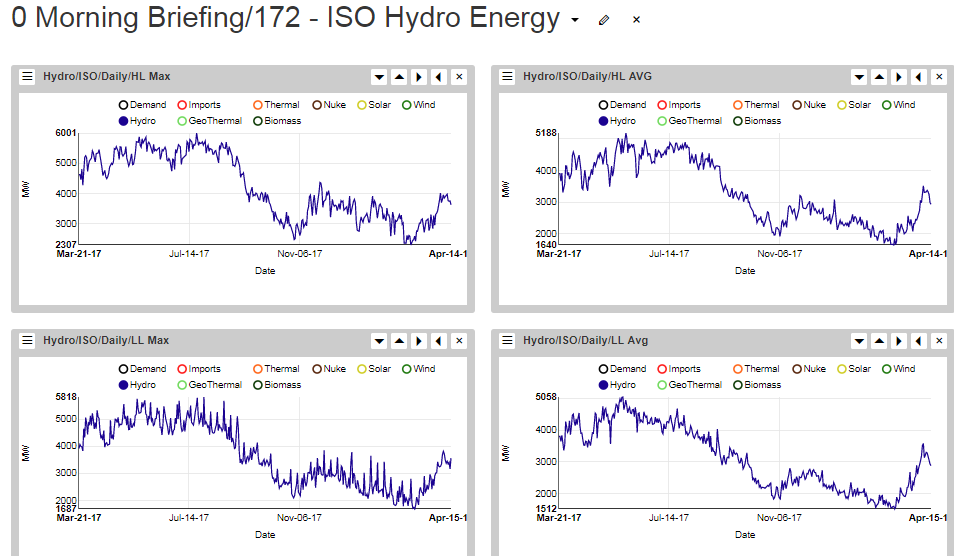 ISO hydro energy has pulled back some, as has the state’s rivers: 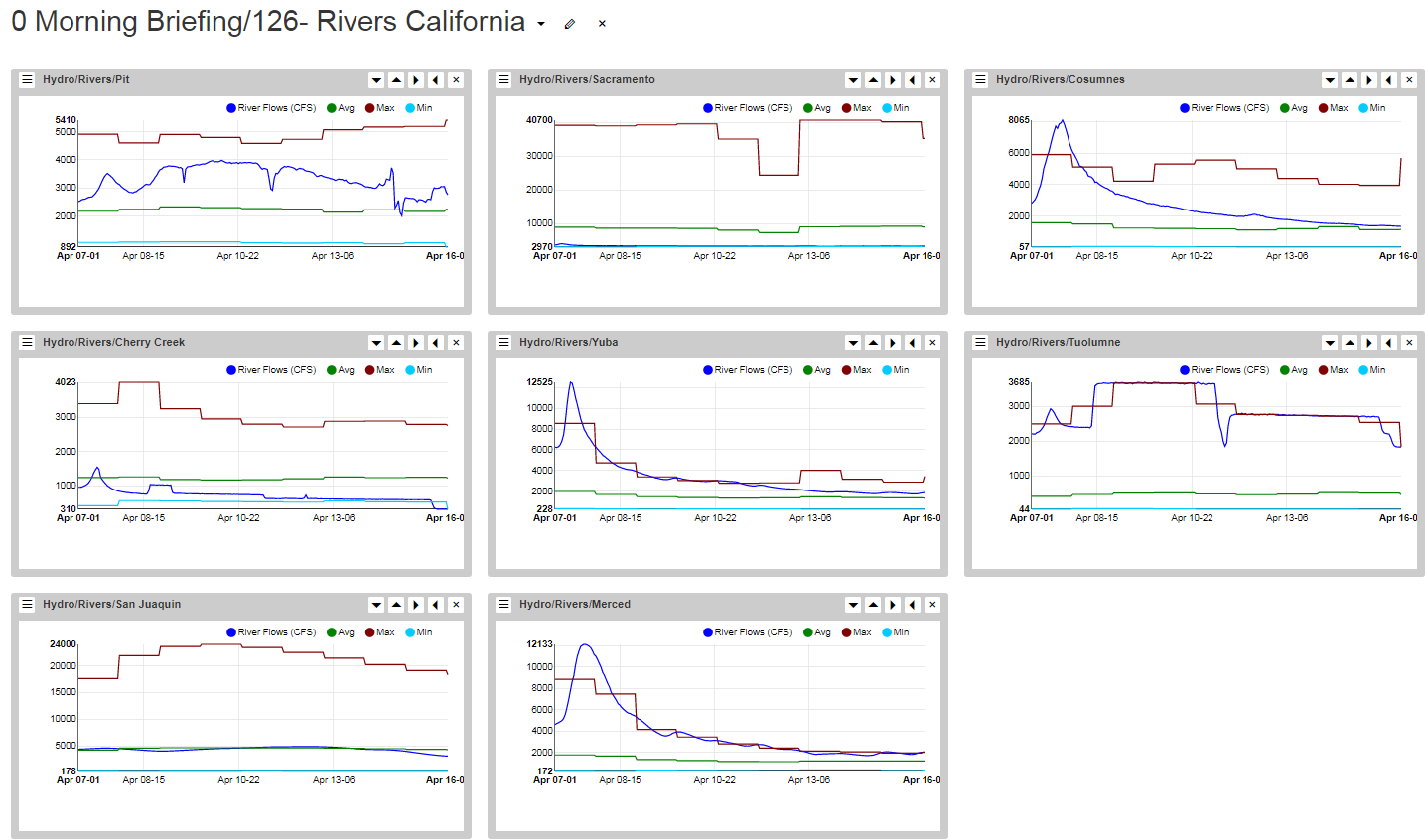 Ambient air is warm enough to trigger some melting; we’d expect all rivers to start rallying over the next couple of weeks. 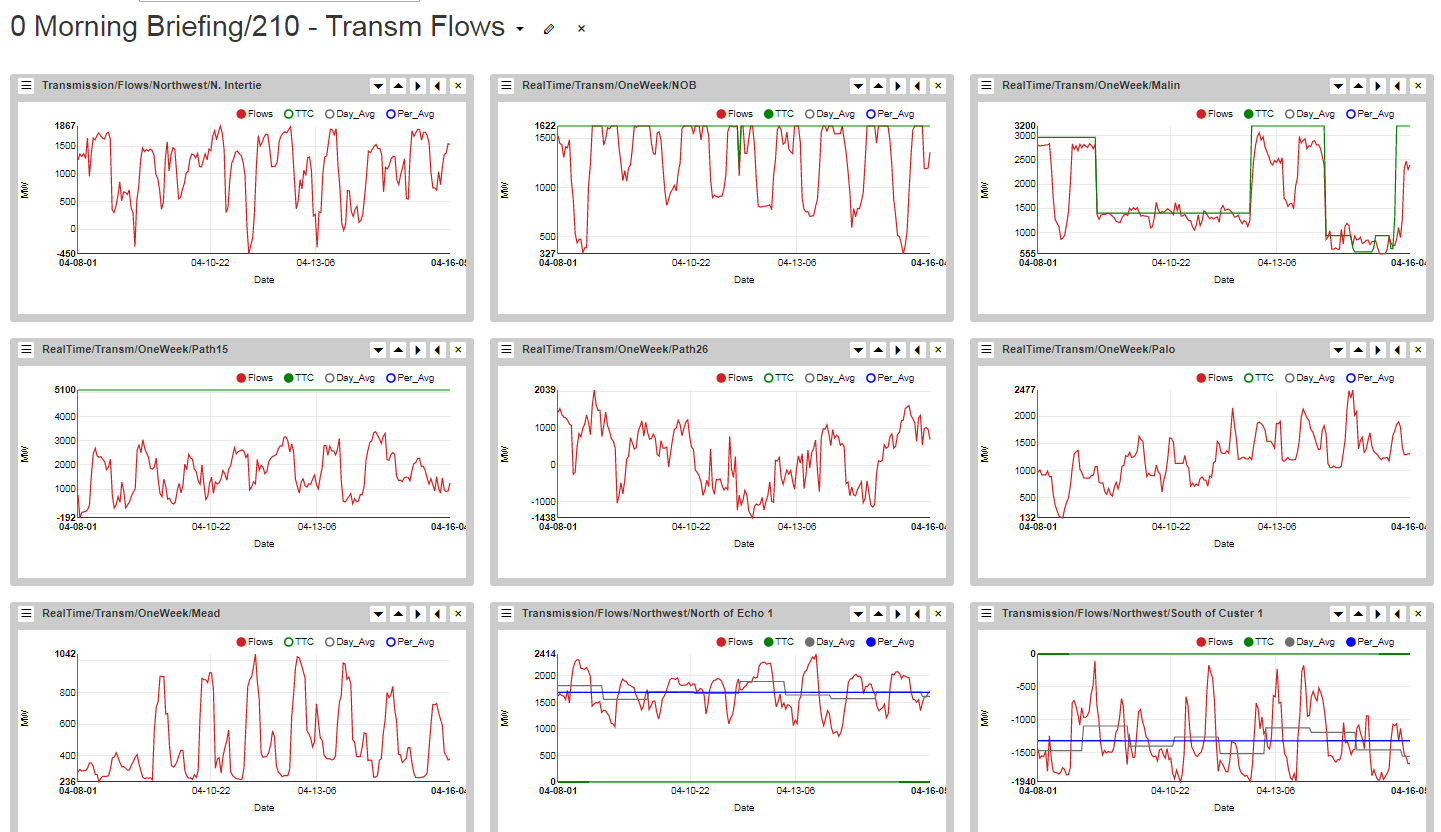 The AC has had some big cuts in TTC, stranding energy in the Northwest; fortunately, BC is buying most of that.

Warming up in the South, but not until later in the week. The next few days will be very bearish there, while the Northwest shouldn’t expect any changes given its weather hasn’t changed. Still normal to below normal, the snow will remain on the hills, and cash will trade where it traded last week.

We’ll be publishing our market blog in a few hours.