Post fundy crawl, our takeaway was growing more bullish in the south (PV more so than SP) and sideways in the North. Hints of the mid-80s in San Jose suggest loads at NP may rally, but increases in streamflow from snow melt may offset those increases in demand.

The Northwest remains the coiled spring, tense and ready to pop, but not until temperatures grow warmer. They will do that just by moving through the calendar; the average temps grow 2-3 degrees each week. That general warming is already manifest in the Spokane River flows – nearly doubled in a week. Still not enough to impact the large storage projects, but each week does grow more bearish, despite average to below average temperatures.

Holding front-end length at Mid-C, therefore, grows riskier and riskier. Substantial rallies have been realized, gains made, is it time to bank those?

August Palo commands a substantial premium to Sep, probably too substantial, given that so little has changed from last fall. Buying this roll is tempting, the risk is the first significant Phoenix heat will blow this out to possibly new lows. A mild late spring, early summer and this is a 3kbtu trade. 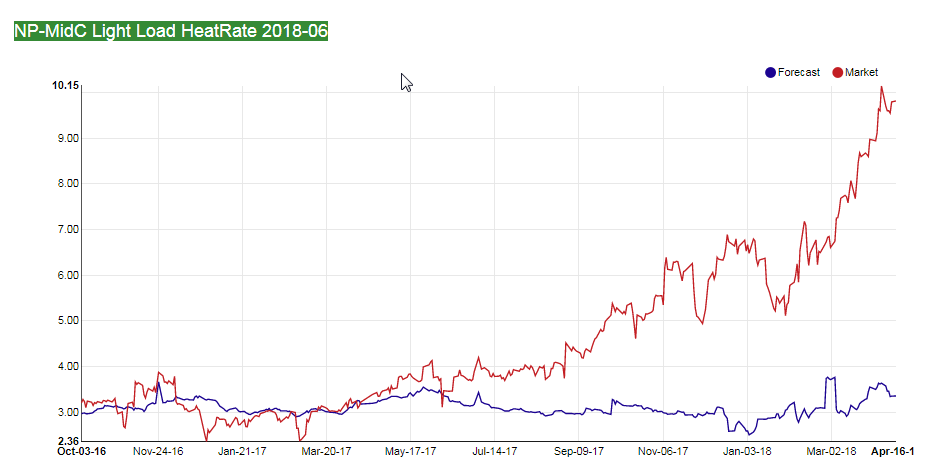 We talked about this last week, the June NP-MidC LL spread. Still trading at lofty levels, but still fundamentally correct. If anything, this spread should have widened given the building snow levels in the Northwest.

Same trade, except August, and same sentiment. Though this did grow as it should have. The bearish scenario here is significant heat in the Northwest that quickly melts the snow. That one is a stretch; you’d need several weeks of the 80s and 90s in Kalispell to wipe out the anomaly.  No sign of that in today’s forecast. 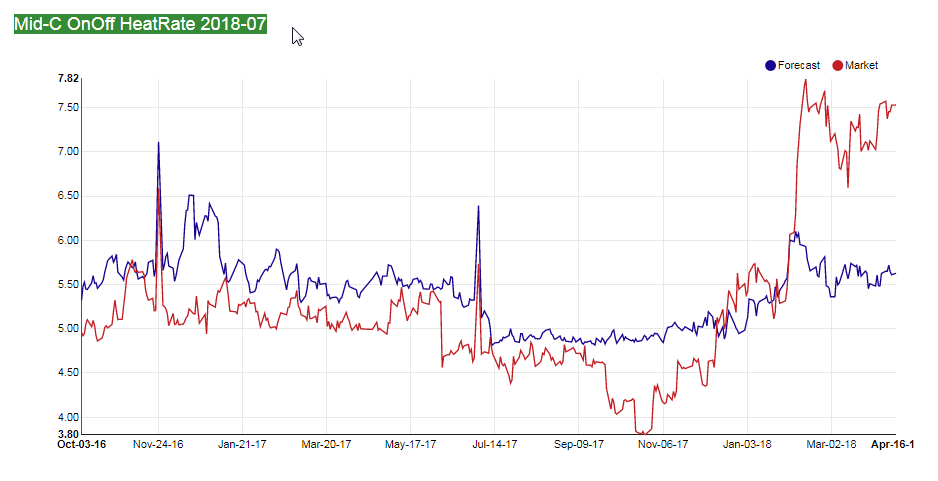 Despite contract highs, this is probably more reasonably priced than not. The bullish case is that July will be a trainwreck, but BPA will keep the gas on the margin for HL and capitulate on LL. If there are some hot days in the ISO, the HL could clear crazy high while the LL can’t clear at gas. 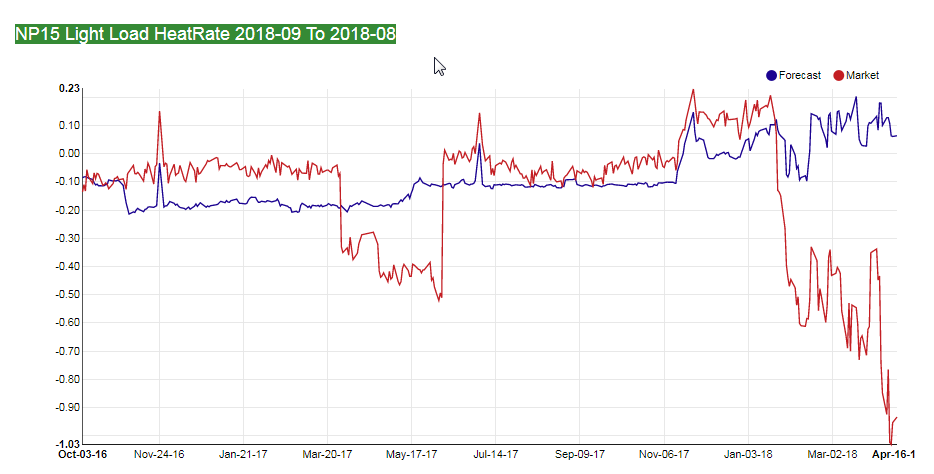 We don’t agree with this, the Sep-Aug LL roll; now it’s well below the contract lows, and we don’t see a fundamental reason for those levels. Water will be bearish on the Aug more than the Sep, Mid-C water that is. However, the line is full anyways so incrementally, doesn’t matter what happens up north. This trade ultimately will come down to a degree day spread. If August is crazy hot and Sep is not, the shorts win; in all other scenarios the longs win. 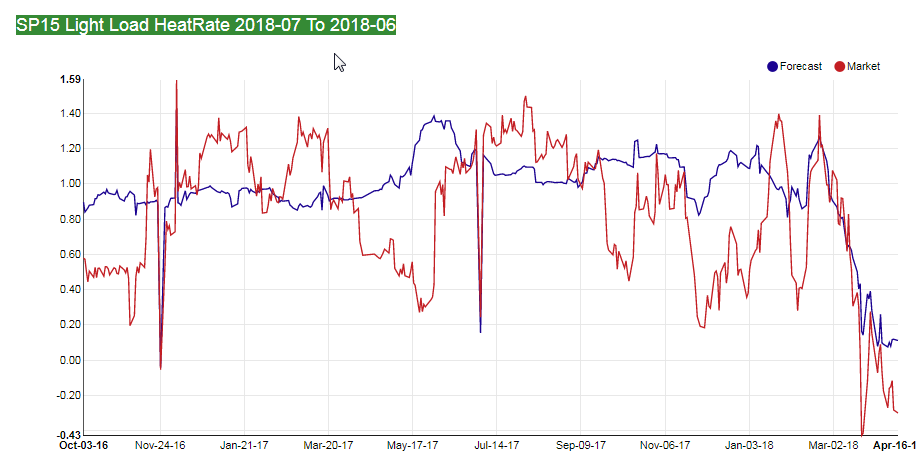 This is odd, too. Why would June command a premium to July, in any scenario?Toss in full reservoirs and “decent” snowpack, and June has grown more bearish of late while July should have remained the same. We’d buy this. 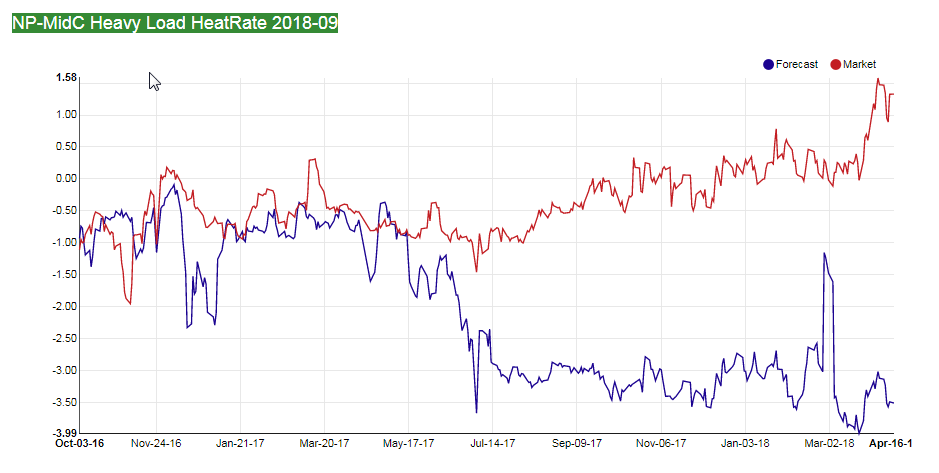 This is the Sep NP|MC HL and is rich, but probably not unreasonably so. After all, the Northwest is staring at one of the most significant high-elevation snowpacks in history. Many scenarios suggest weakness spilling into July and August, all of which puts pressure on Sep. 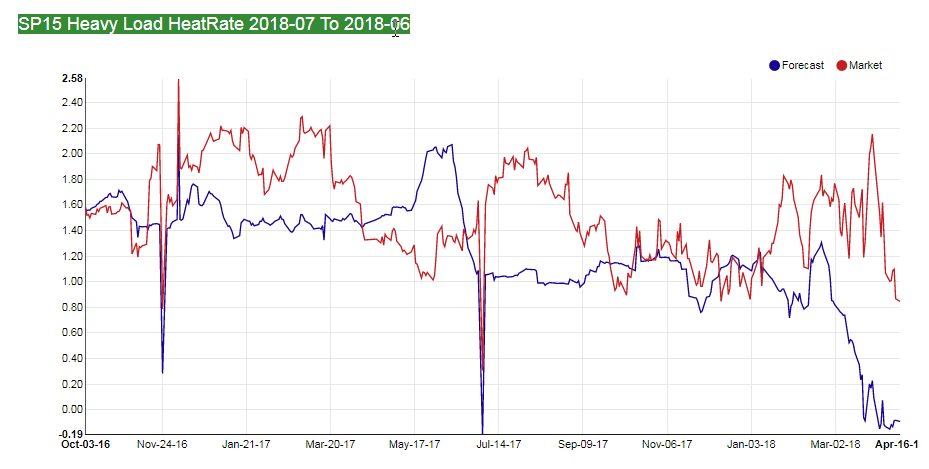 We talked about the LL, this is the HL, and it is cheap too. We’d buy this all day long. 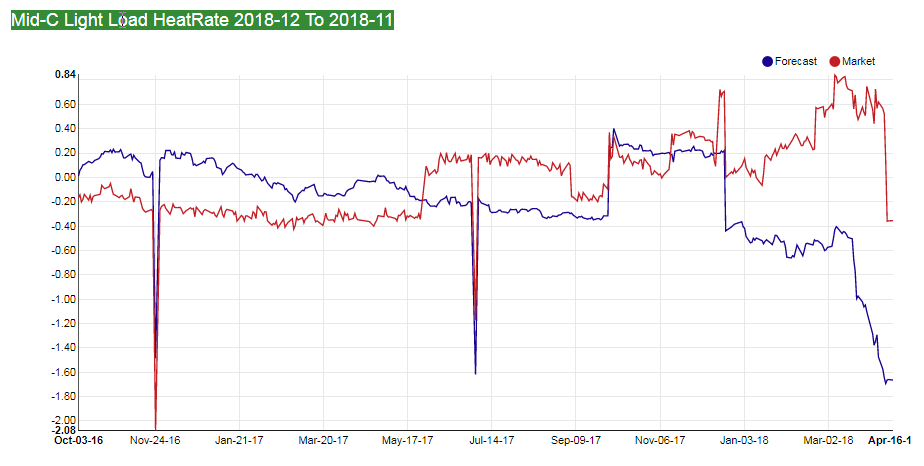 Way out in the “front,” this is the Dec-Nov LL roll at the Mid-C. The product has tanked over the last couple of days, no clue why now it is cheap. After all, 70% of Nov lacks DC exports. 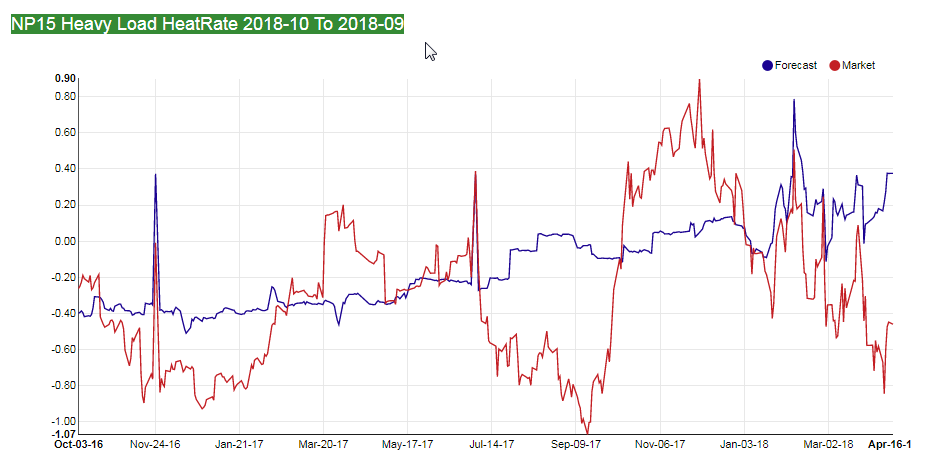 This was cheap; now it is less so but still has upside from the buy-side. 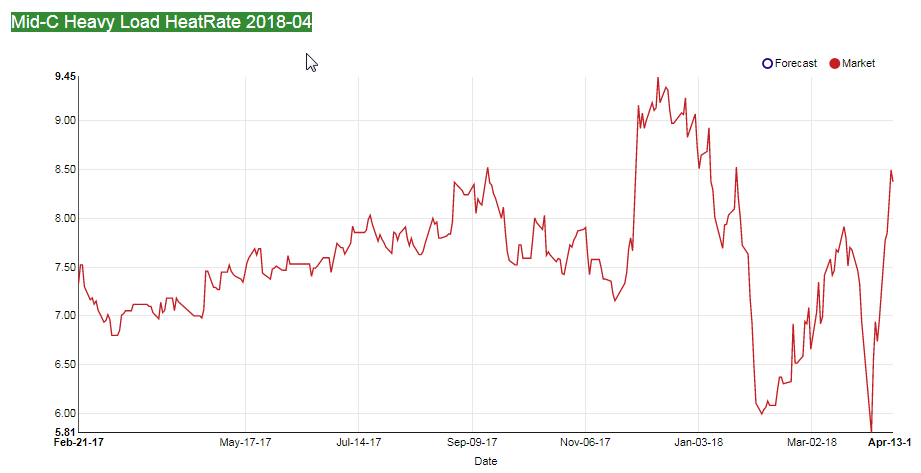 April “BOM” has soared, the bold longs got paid, so is there any point in hanging on for more? Aside from it is safe for a few days, probably not. There just isn’t a lot of MWH left in BOM and we like cash. We’d take all of our length off and move it to possibly May.

Same story with May, big move up, but we think there may be more upside, but only if it stays cold. That is the outlook today; it has been the outlook for eight weeks, the trend is your friend, etc. Plus, the delta between where cash and May will clear is about $4.00. If we liquidate our BOM, we’d stay long the May and watch the temperature. The drafts end in two weeks, that will cut 20-30k out of Coulee. Still, length is risky in the face of this massive water year, but if it stayed coldish til May 10, this would probably be clearing at a 10k heat rate. 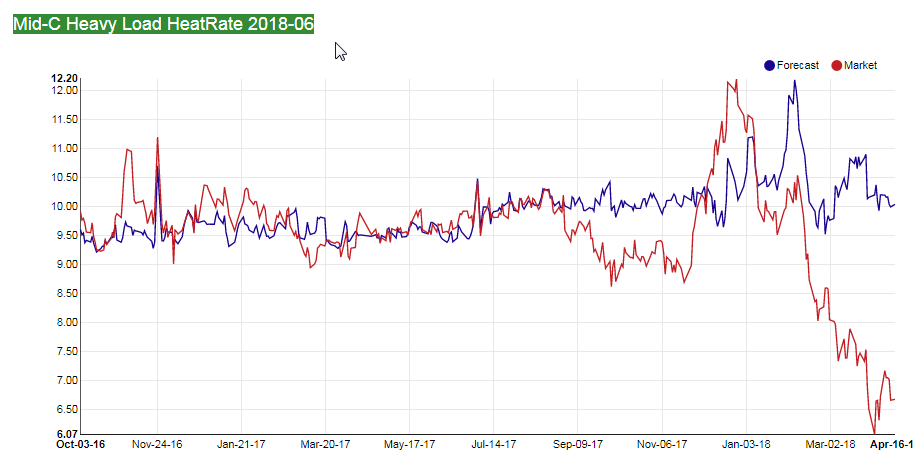 June staged a rally, then faded. The new snow builds only made the bullet more bearish, though there isn’t much room to add more water to June, at least in the STP.

We’re only talking about the last week of June, the rest of the month is at hydraulic capacity. Even those days, there isn’t much incremental energy to add. July, however, is a different story:

July has room for another 5000 aMW, though that only comes into play if the front-end stays cold. 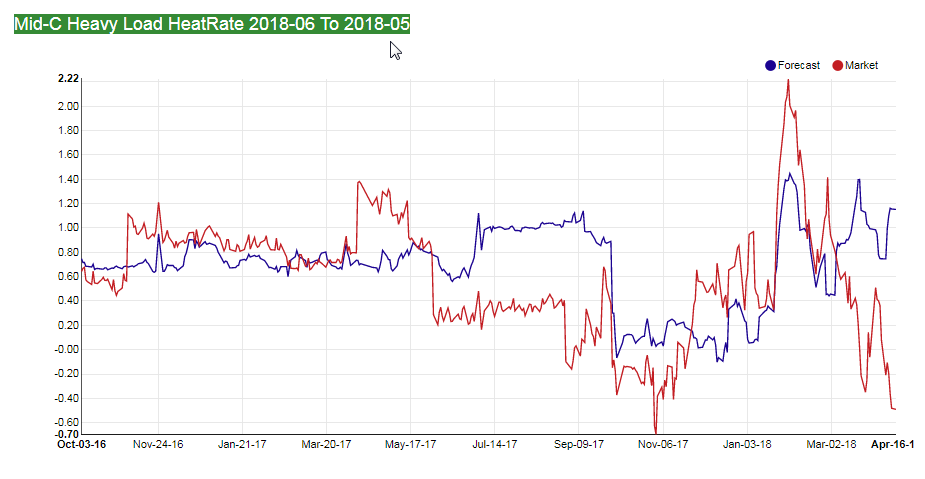 The June|May roll has tanked, as well it should have. We see more room to fall, again, if temps stay cold. 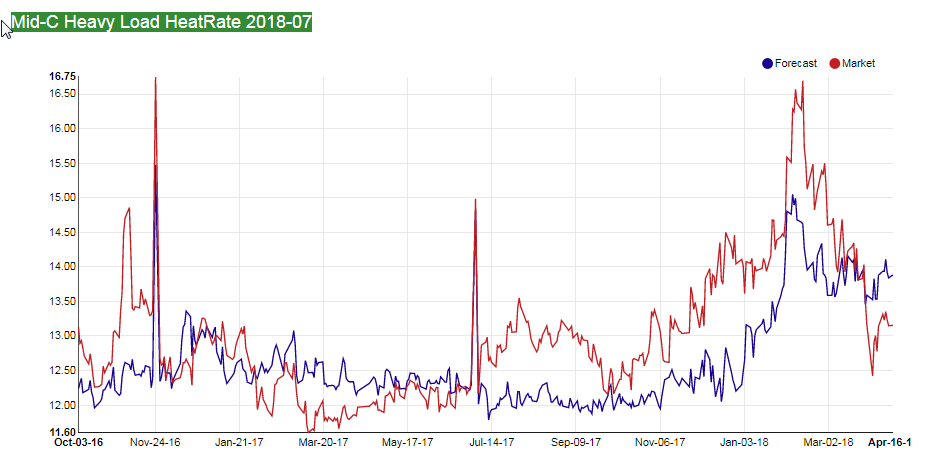 July staged a rally, why? Snow above Coulee realized about a 15% build during this rally, and we had a full week of deferrals. Short. 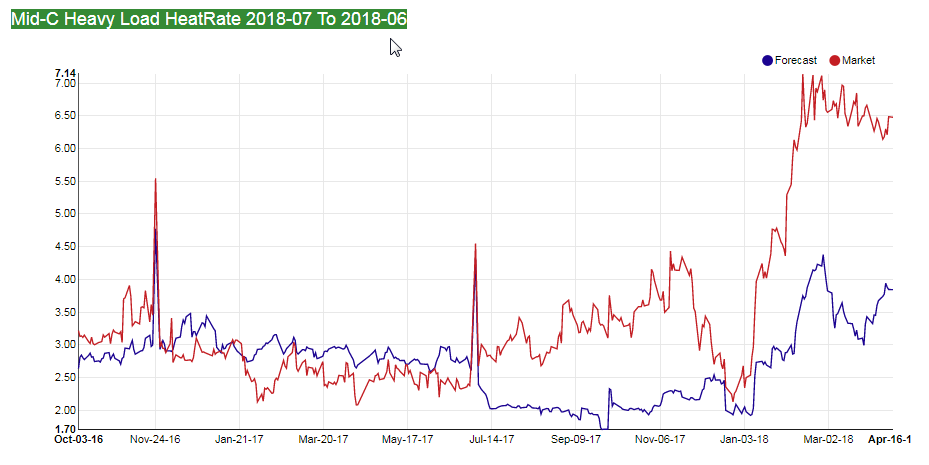 We studied the LL version of this above; at this point in the calendar. For what we know, we’d be more inclined to sell this, but would, instead, just short the July. 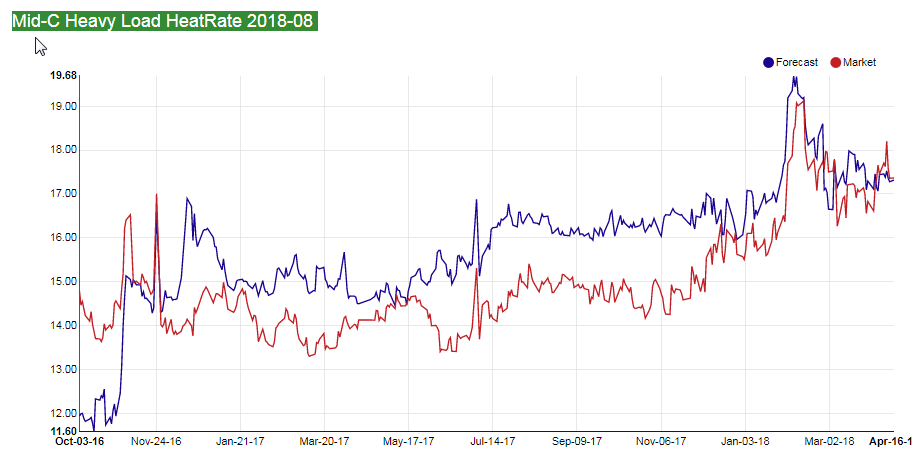 August grew more bearish over the last week, so the market rallied it. Short. 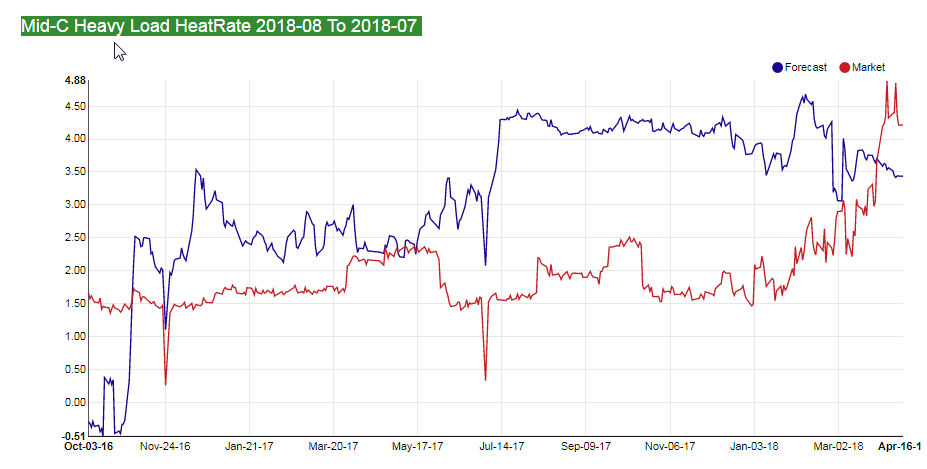 July grew more bearish than Aug grew bearish, but both are bearish, and we’d not waste our time on a roll. 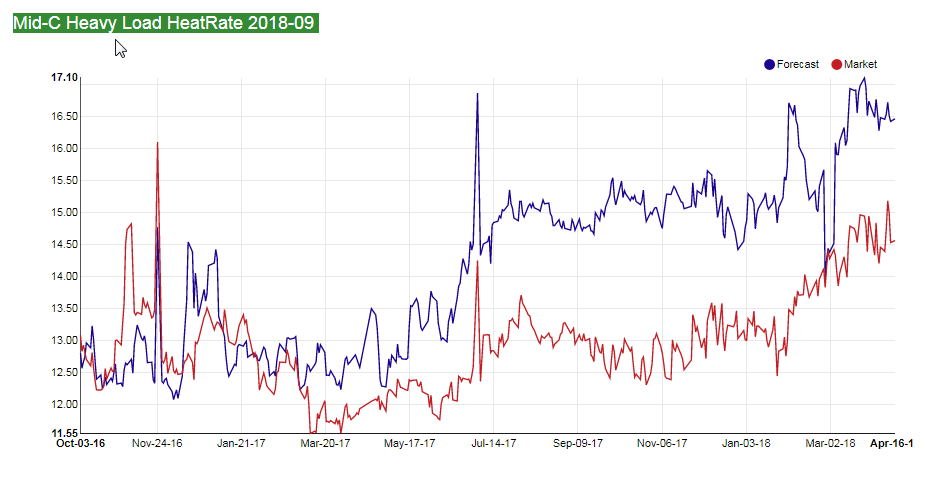 Sep didn’t change fundamentally, but it drifted up, rendering it a short candidate, but not as attractive as July. 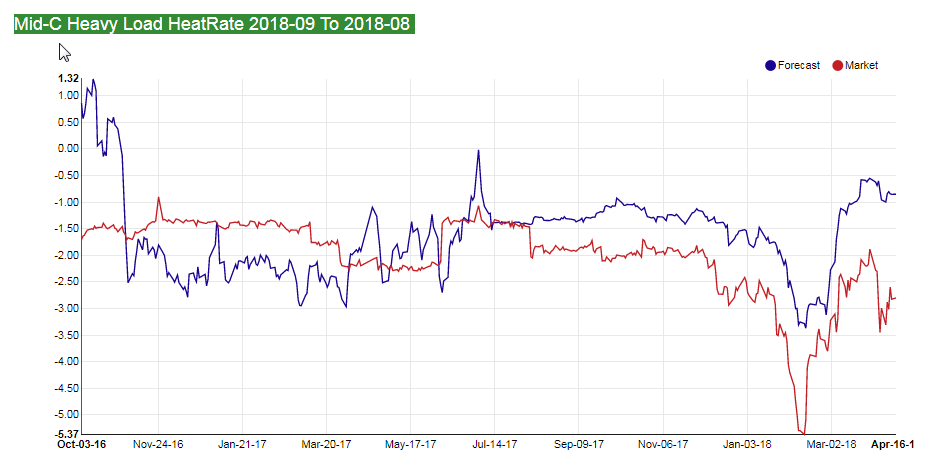 This is fairly priced, pass.