We are moving toward a more standardized blog format using the “0-Morning Briefing” dashboard folder as a template.  This allows you to see the same reports before/during/after our blogs are released. 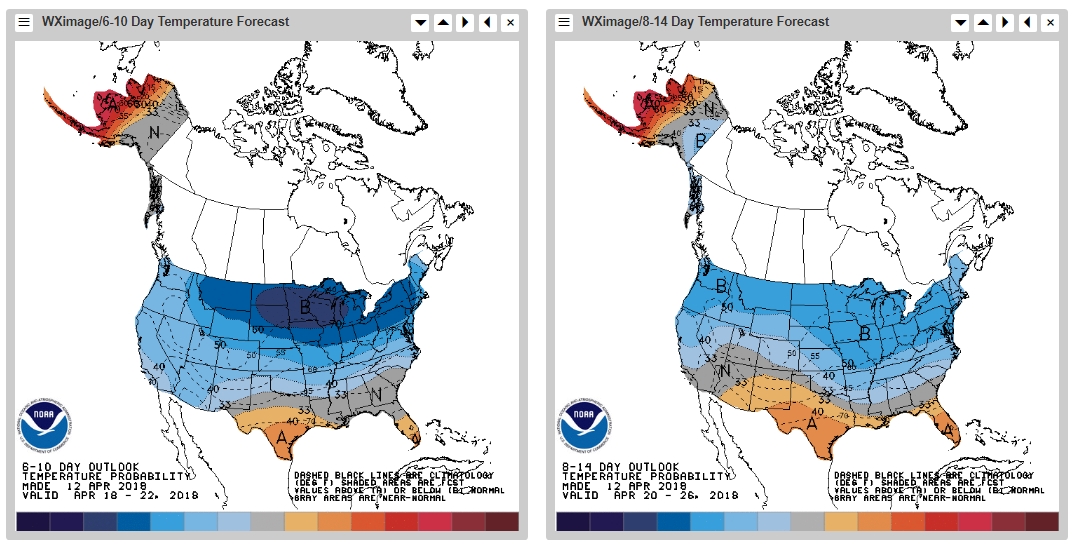 The west is likely to stay below normal looking out a week though Southern California is pacing closer to average.  Looking out beyond one week, temps uniformly rise, particularly in the Southwest, as at the very least, a return to normal should be on the way.

SoCal-Citygate jumped nearly half a dollar day-on-day, and is up $0.85 week-on-week.  The rest of the hubs remain stable.

Mid-C demand has stabilized over the past couple days after a free-fall beginning on the 6th, shedding 17% of demand by the 9th.

The Southwest is moving the opposite direction as demand has increased 7% in five days. 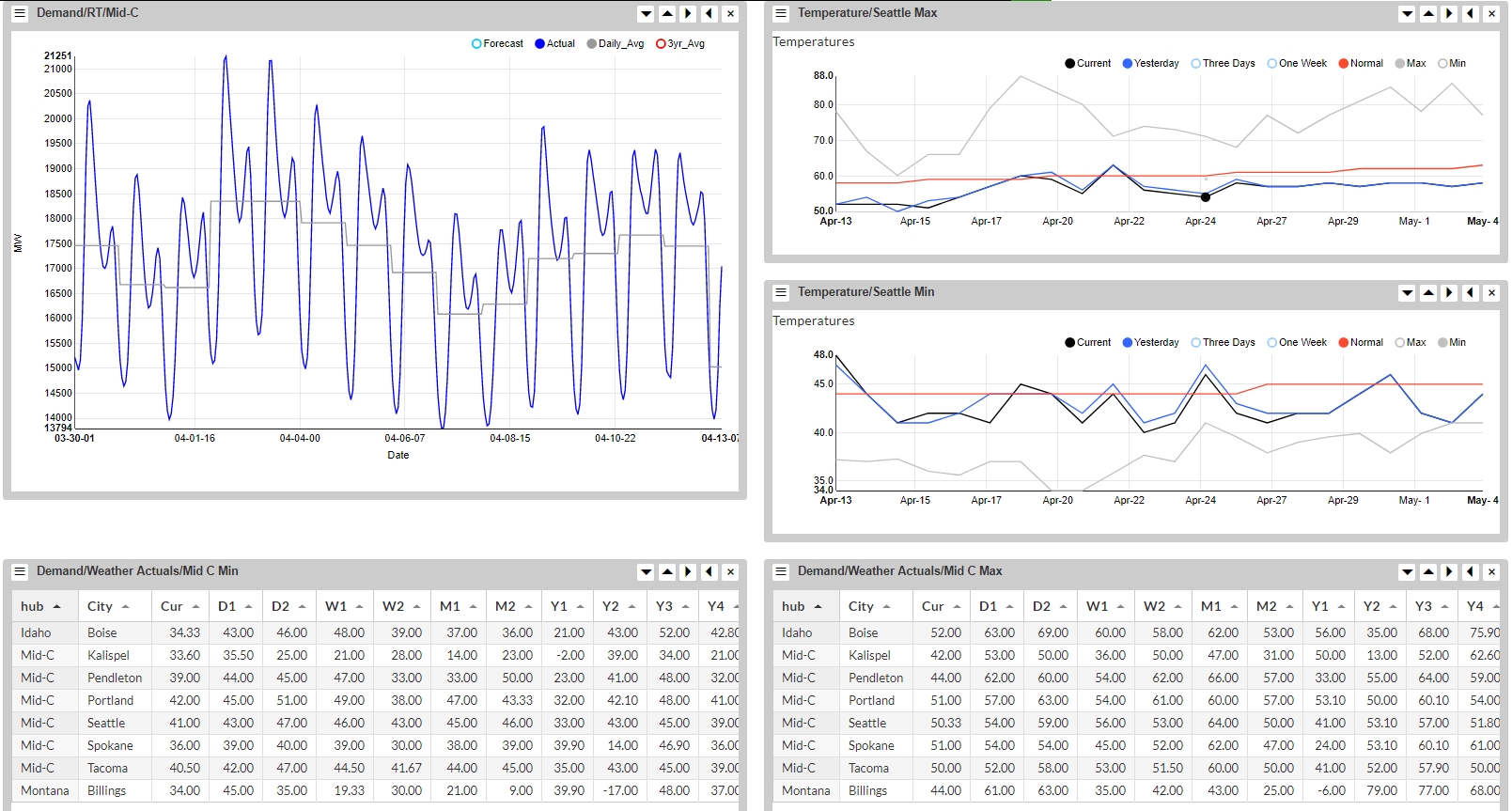 Seattle daily highs have been below normal for seemingly all of Spring, but now we are seeing signs that daily lows will drop below average as well.  Demand is below last week, but cooler nights should change that. 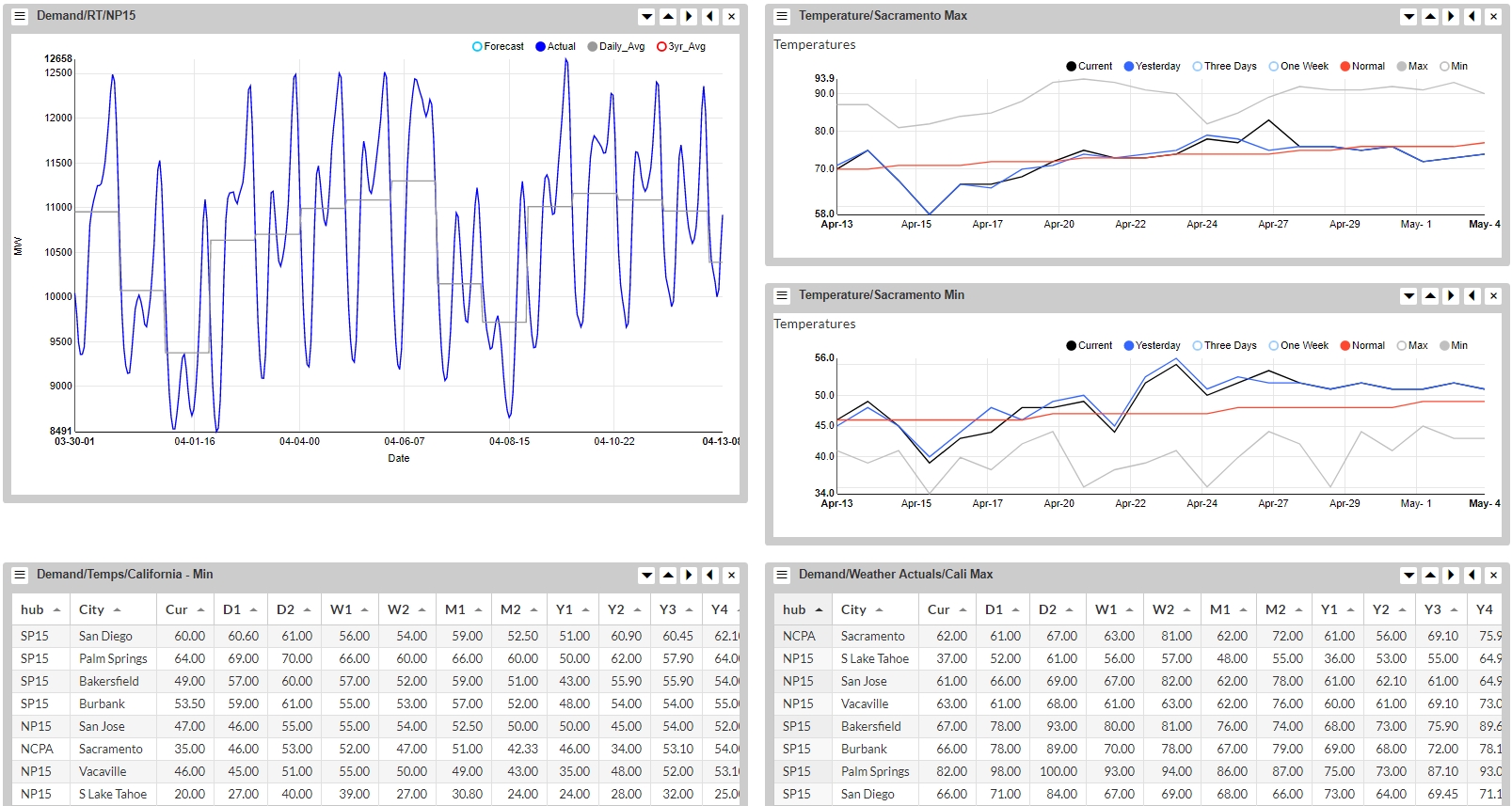 Demand has fallen steadily since Tuesday and should continue to drop as temps stay in the neutral degree-day zone moving into the weekend.

SP demand continues to tank following 90-degree temps earlier this week with loads 1700 MW lower in the daily aggregate.  Burbank highs will peak back into the 80s over the weekend while lows should stay north of 55.

Relatively cool day in Phoenix as highs peak in the upper 70’s, but that will change tomorrow with its high of 91.  Next week looks closer to average with most days in the mid to lower 80s. 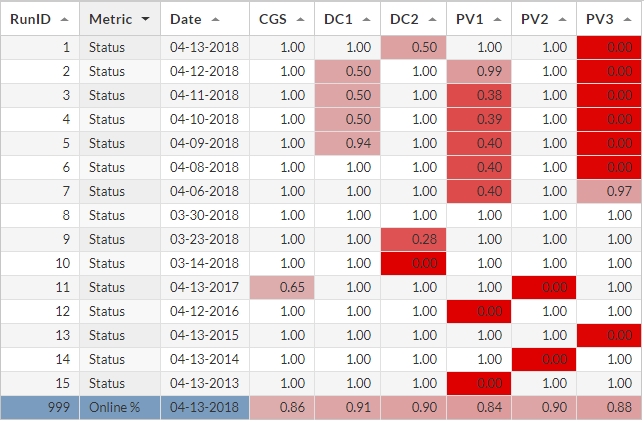 PV1 and DC1 both made a full return online today, but now we see DC2 has dropped to 50%.

Mid-C wind hit its highest hour since March with 3,864 MW at 6PM yesterday.  Solar saw a small decline in SP and ZP.

A cool spring is allowing NW precip to add to the snowpack in the higher elevations, and it looks like more precip is on the way for the Cascades, Eastern Washington, and Western Montana.

Tahoe will stay above freezing all 24 hours tomorrow and hit an eventual high of 57.

Inland Northwest Rivers, particularly Spokane, are still building up cfs while the max line is plummeting, and the average line is stagnant.  With the mountains still full of snow we could see a new max following the first warm day of the year.

Dworshak added nearly 2.5′ over the past day while Grand Coulee’s shed 1.3′.

All four charted locations are holding on to 120%+ anomalies, especially Flathead at 152% of normal.

Flathead saw a massive increase to its anomaly following yesterday’s snowstorm and now sits at 302%.  Clark Fork added another 50 percentage points while the other inland basins had more modest increases.  The anomalies should continue to soar with mild temps failing to shed snowpack or even leading to a SWE increase. 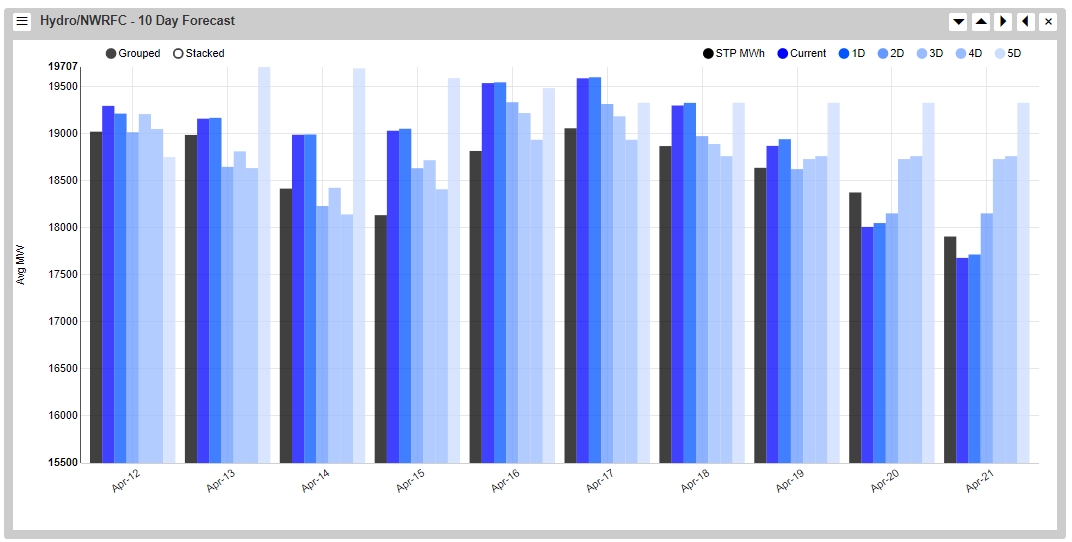 The STP forecast suggests a bottoming out at the beginning of next week before peaking again by Wednesday.  RFC doesn’t expect cuts to be as drastic but agrees with a peak at mid-week.

Hydro shows a decline since the 10th in all metrics though sharpest in light load. 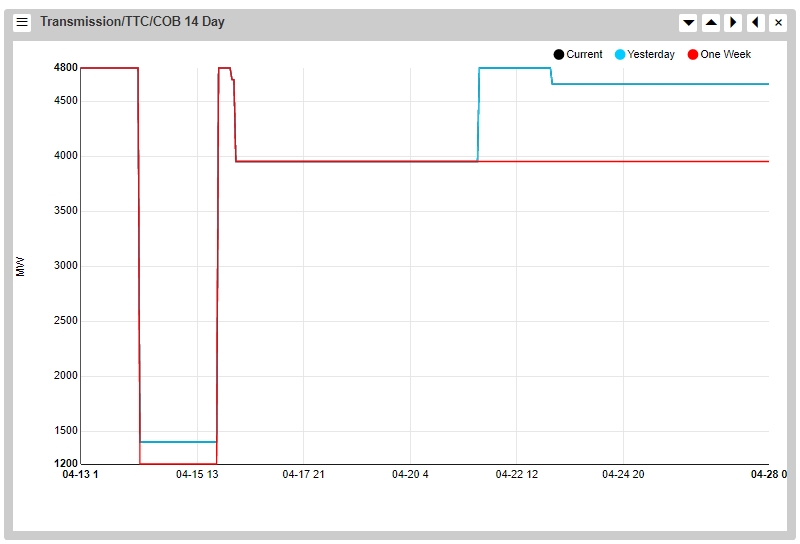 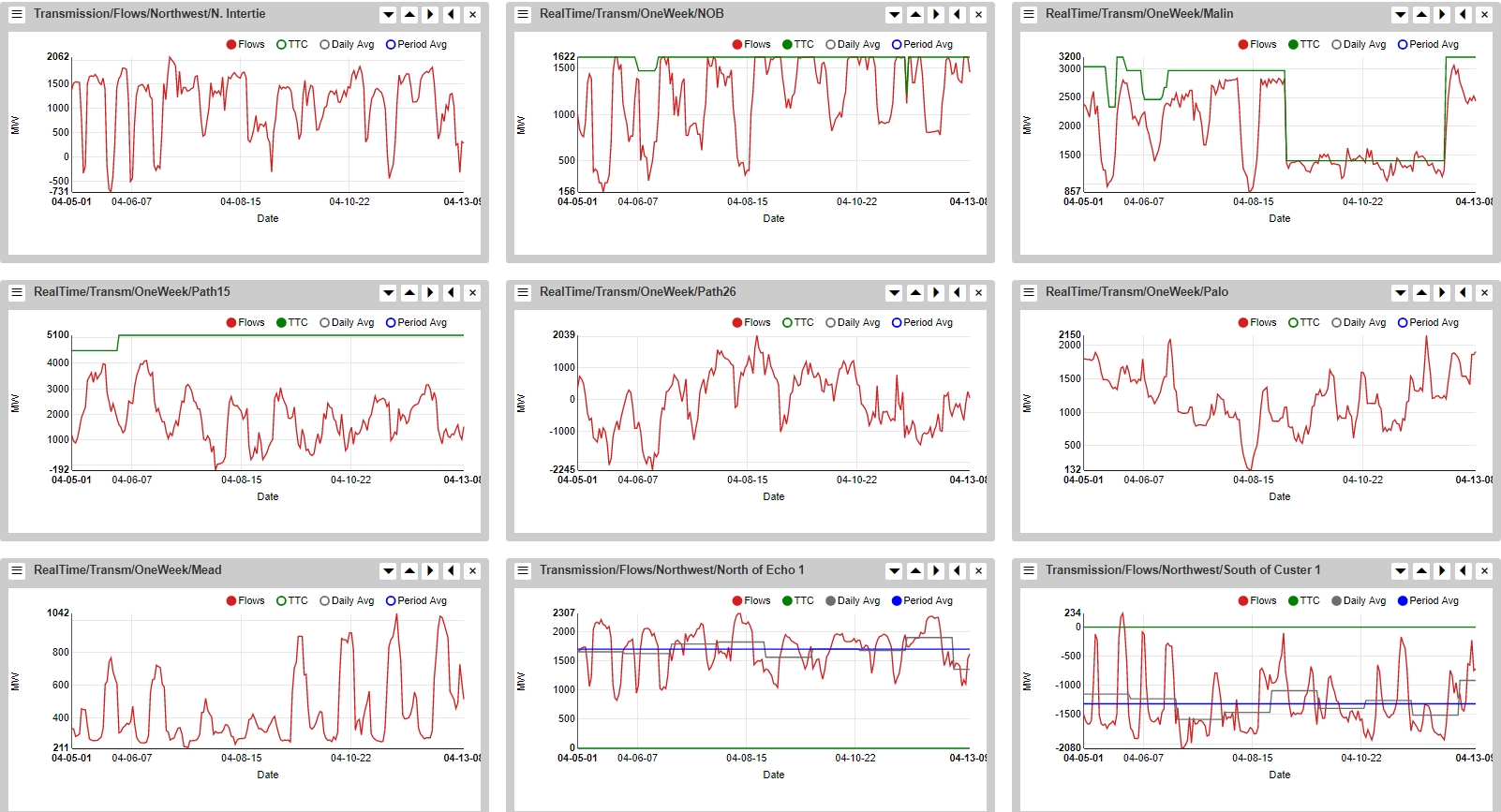 Have a fun weekend,