My takeaway, from the earlier fundy crawl, was cash bullish at PV for all of this week, slightly bullish ISO until Wed, and neutral at the MidC, demand wise. But its supply at MidC that will set value over the next three months and the hub is sitting on a mountain of energy, but all of that potential energy is frozen in place as snow. Given no hints of a warmup in the next 10-14 days, we’d be inclined to own more BOM and Prompt MidC, but cold in April is just pain deferral to May-Aug. More on that later. 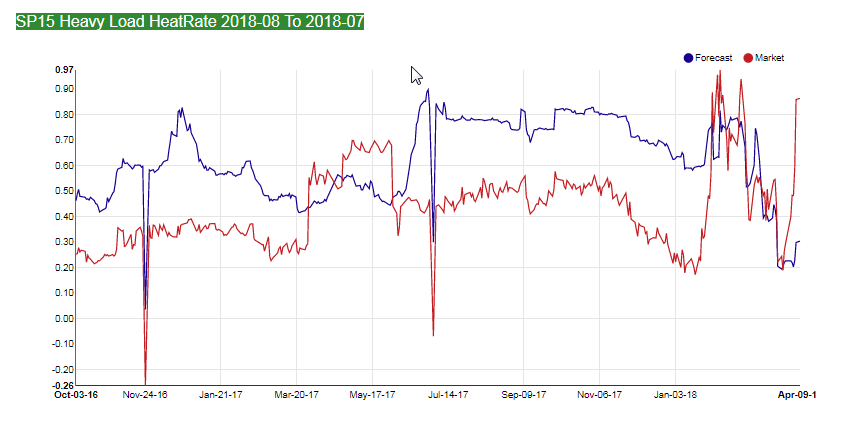 This roll, the SP HL Aug-July, has soared of late and we don’t disagree. The water year has been building inside the ISO – that makes the roll grow too. But now, at today’s prices, is it overdone? Over-bought? I’d say maybe, but think it more reasonably priced than not and we would pass.

The Oct NP-MidC HL spread has not corrected, it keeps soaring up. This is a big water year for the MidC, but how much of a WY anomaly spills into Oct? Very little, which leads us to feel the spread is too rich. Lots of problems (var, credit, odd cash moves) with executing a bullet six months before delivery, so we’d look elsewhere. 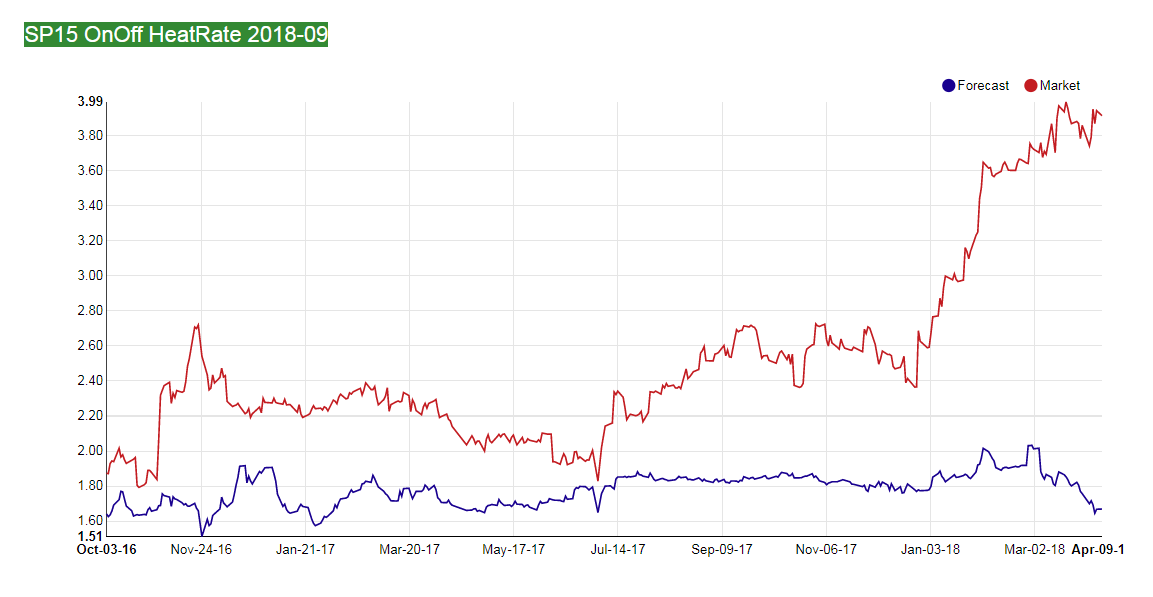 Similar story with the SP Sep On|Off; this has been trading at a contract high for most of the year. Only tight cash spreads would generate selling pressure, don’t see that coming any time soon – pass.

Everyone knows June Mid-C will be at ground zero of this water year. But, is that true? What if it stays cold through much of May and the runoff is deferred evermore? At some point, does June look like a buy? Also, keep in mind, NP nearly doubled its water year in March, so the June outlook is more bearish. All of that said, we’d be nervous about shorting this, but if we did, it would be for $1-2 gains.

Same trade, but August. We think this one is a better buy because all of these melt-deferrals are ending up in August MidC, and there is little chance of any snow left in the Sierras by July.

These are heat rates, 6k for the July HL SP-PV spread. How does this lose money (from the buy side)? 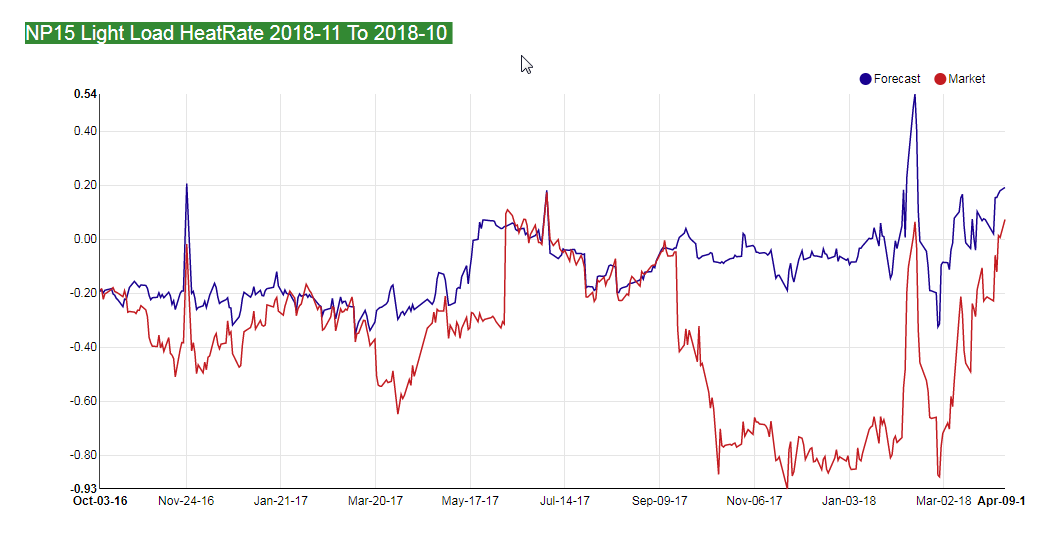 Further out, the Nov-Oct NP LL roll. Here is an example of a big move; after trading contract lows for four months, the Nov has gone bid over the Oct. But alas, its fair value now. 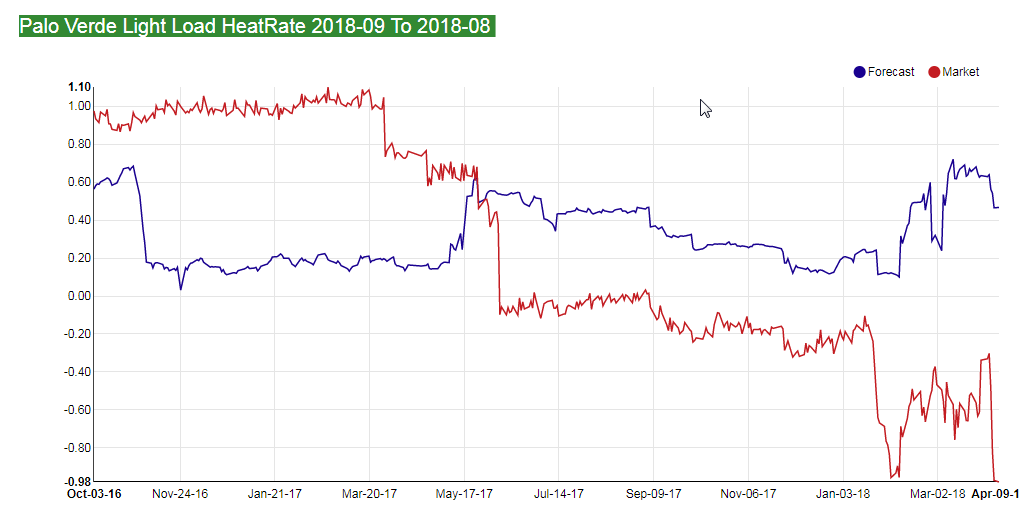 Here is something cheap; the PV Sep-Aug LL roll; now you can own it at contract low. Not sure what is driving this, must be an over-bullish Aug bid. If I was trading to look busy, you could hide behind this trade and maybe even make some money?

We talked about this a while ago, now the June MidC On|Off is back to fair value; if anything, it might even be cheap? BPA will pull out every trick in its bag to keep HL gas on the margin. LL – call it the sacrificial lamb, they won’t even try. So, if HL clears $12-14, and LL clears at $1-2, this is cheap. 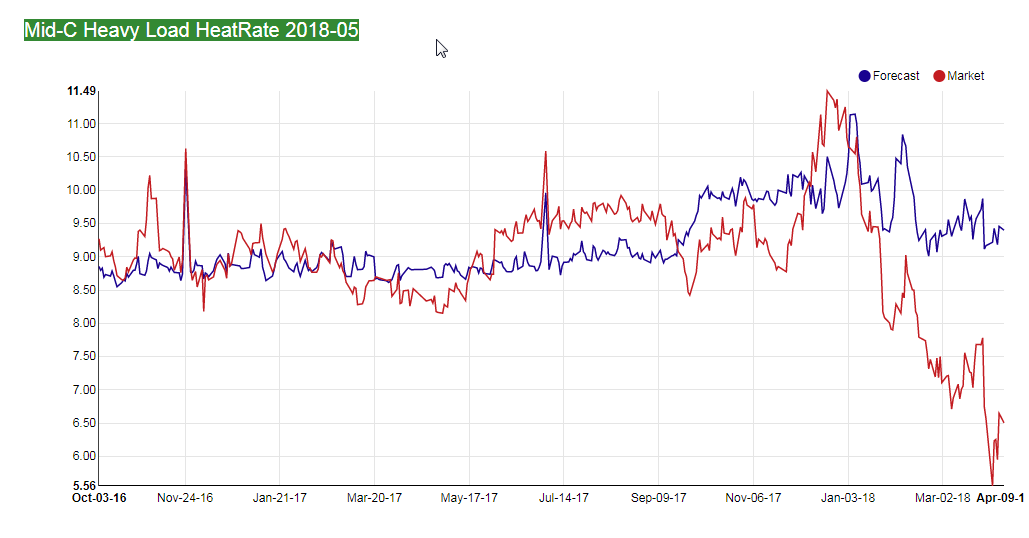 The May is not as cheap as it was, but we’d still own it. Our rule is if the ten-day outlook is cold, buy the May. Weather is trendy; the Northwest is in a coldish trend. The odds of this spilling into May are about 5X higher today than two weeks ago. Check today’s cash and add 500 btu – that will be May’s cash. Recall, May is refill season, April is draft.  Refill doesn’t work so well when the rivers are empty, need runoff for that. We’ll stay long and keep watching the weather, especially this dashboard: 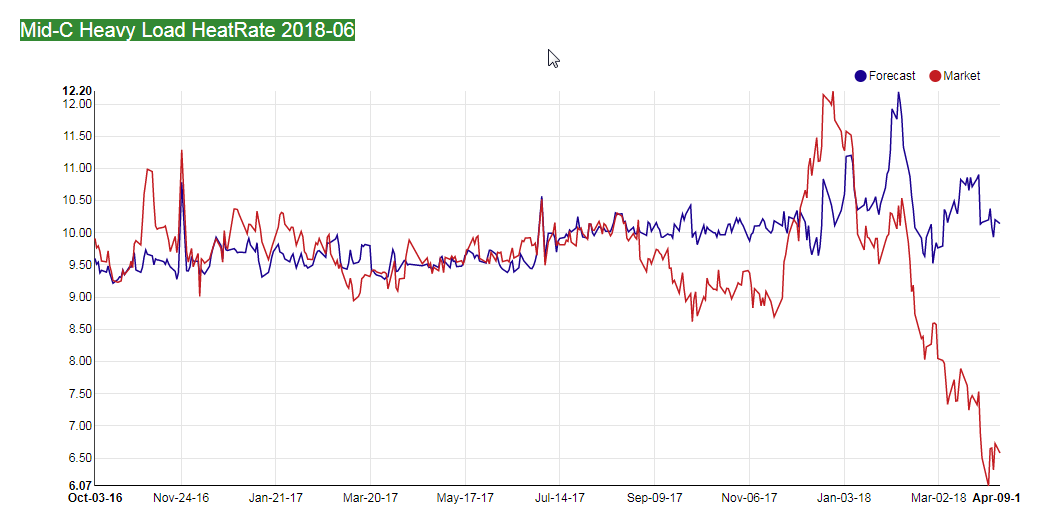 June rallied a bit, but we see no reason to get overly excited about owning it, not as long as we are long the May. 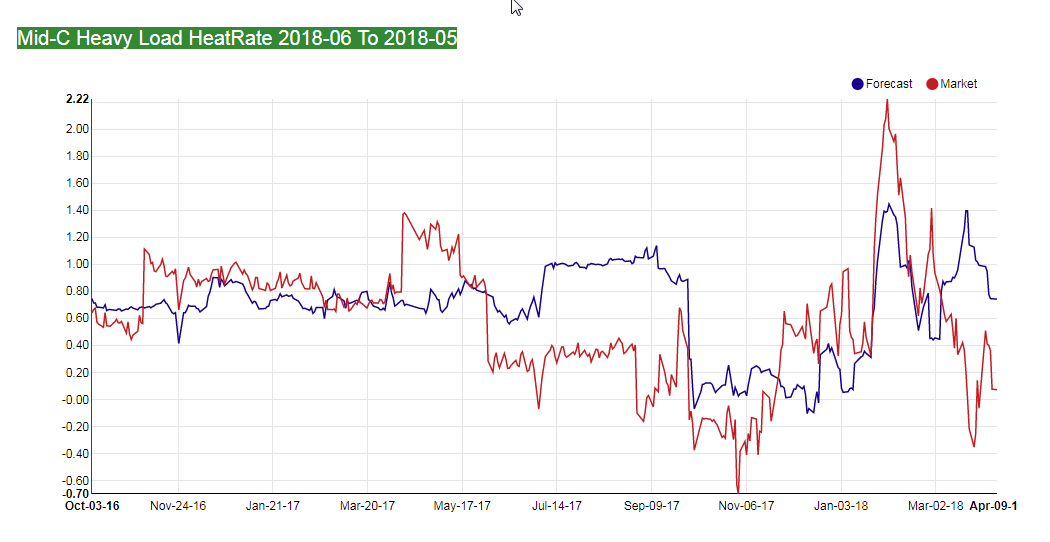 The roll’s chart makes it look like fair value, but we think this is still way too high and would sell it to -1 or -2, as long as it is cold. 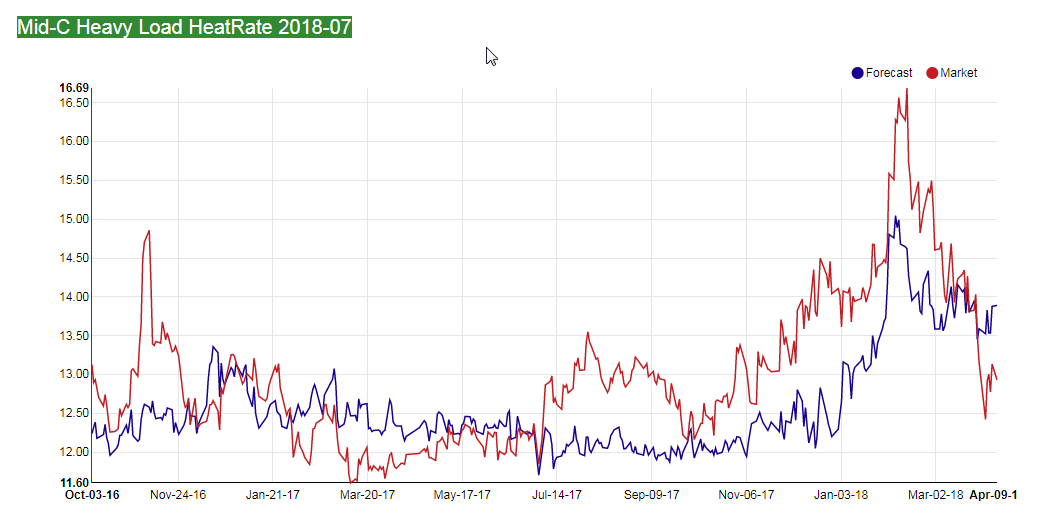 Anyone still holding length here is feeling the pain, deservedly so. July is the holding pen for all of those runoff deferrals; June is pretty much at hydraulic capacity so it can’t move down much, July can absorb a lot more water and will, maybe in today’s STP. We’d short this and buy May. 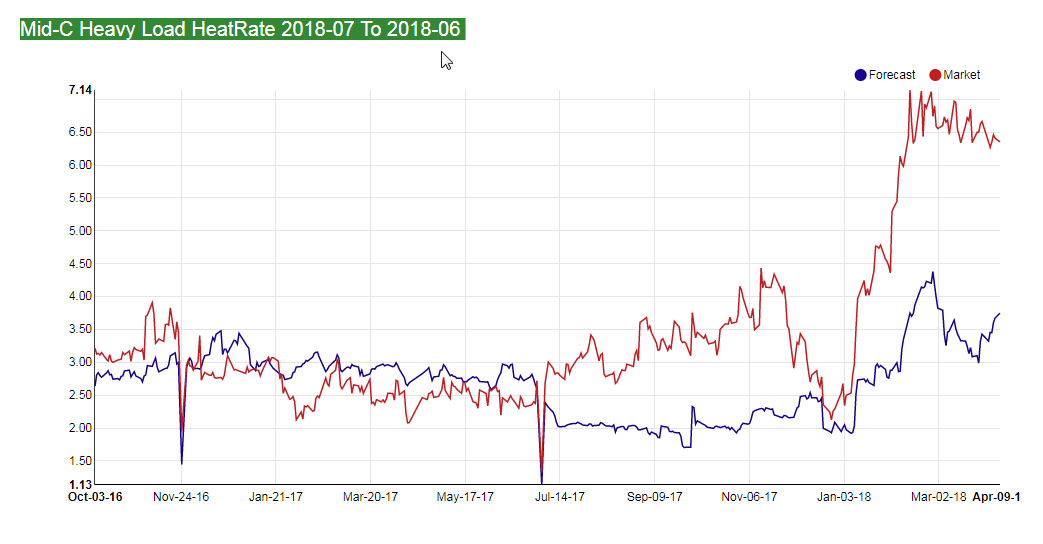 June’s destroyed which makes July look good, but July is a basket case too. We’d be more inclined to sell this and hope it stays cold and June gets some cash sympathy but would unwind quickly and turn everything into short MidC once we see heat.

Aug is not as rich as it was but is still over-priced not only fundamentally, but tactically, too. Fundamentally because snowpack is building and melt is getting deferred. All of that means Aug has more natural river flows than it did a month ago. Tactically, this is a sell too because at some point the MidC cash market is going to tank. All bullets that begin with “MC” are going to be sold, including and especially August. 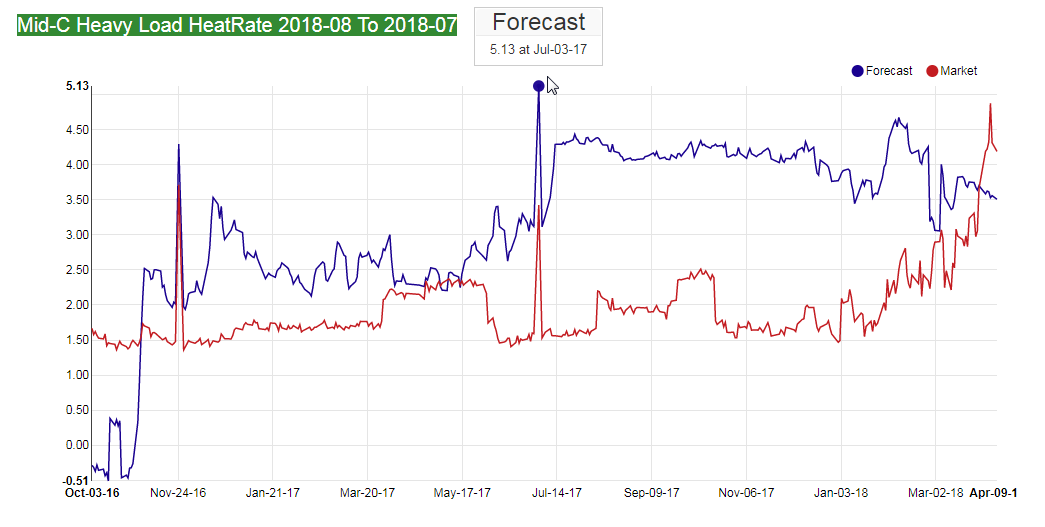 Aug or July – market says Aug, and we don’t disagree, but don’t think Aug won’t wear some of July’s pain, it will. We’d short this out of spite, that and my knee hurts and  I want to quit writing. 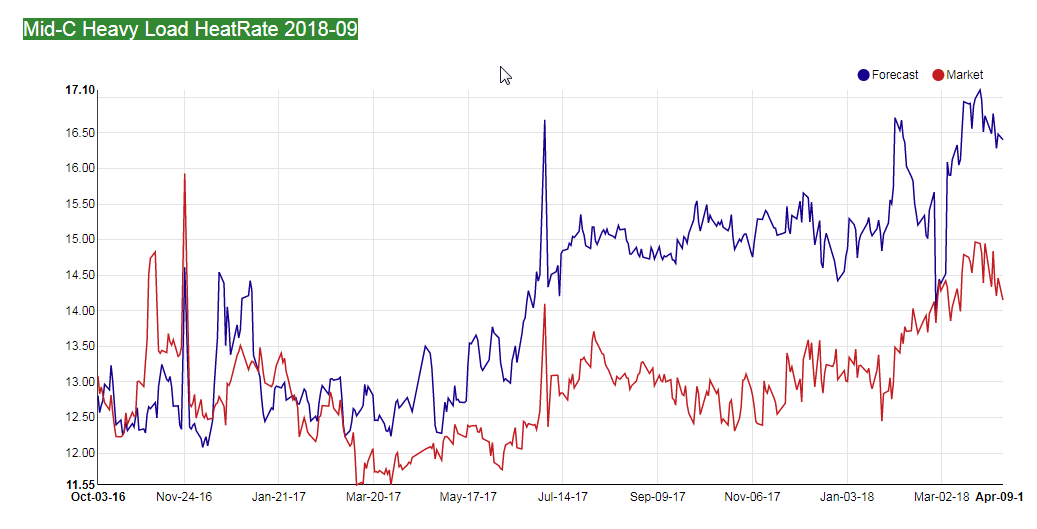 Sep has gone from Summer’s red-headed step-child to a centerfold model. She’s still a carrot top and should put on her clothes.