Admin Note: I’ll be at the office “half-time” this week, following last week’s Total Knee Replacement. The surgery was a success, now for the rehab, which takes time. Blogs are back on schedule.

Phoenix flirts with the 100s, as does Palm Springs, and LA sees 90s. The Northwest remains more cool than warm but slight signs of the freshet are appearing. The Northwest was slammed with big precip and cold weather and the SWE anomalies gapped 30% on some stations. 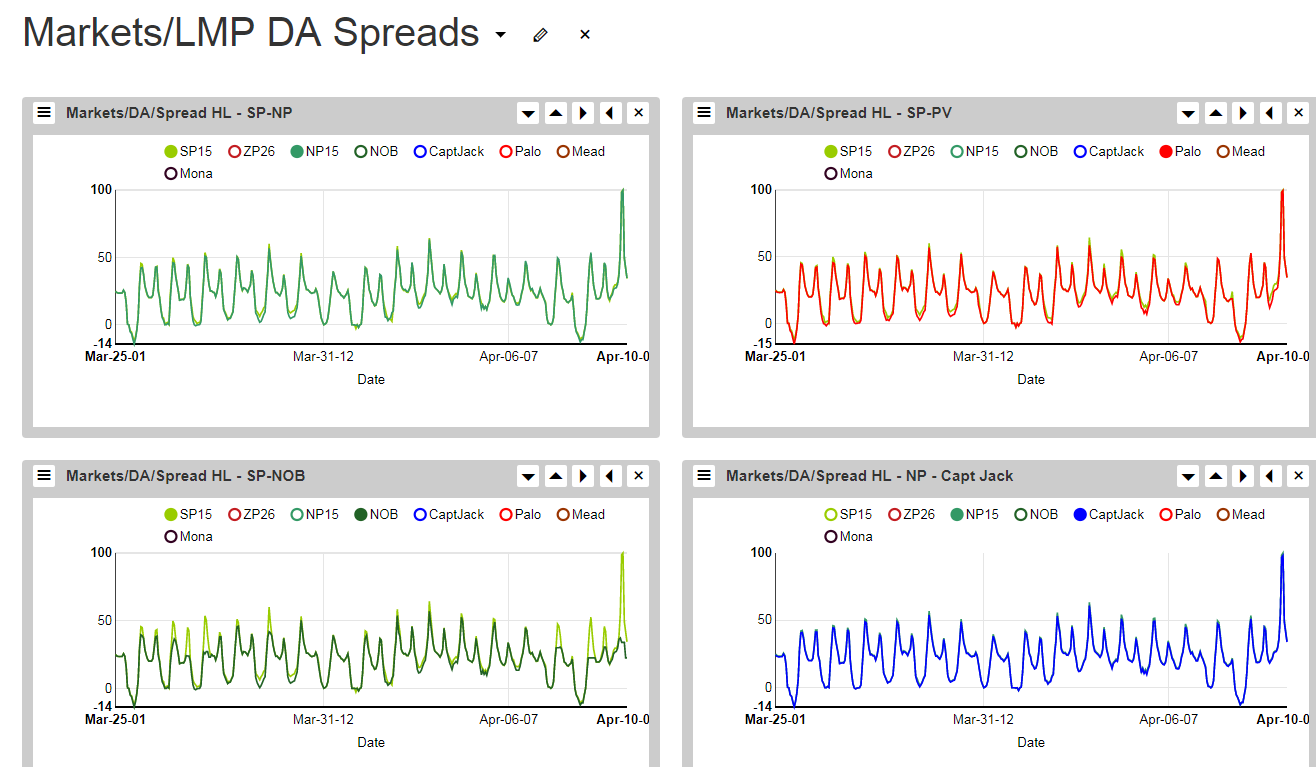 The DA for today blew out yesterday, posting the first DA hourlies north of $100. Clearly in anticipation of LA hitting the mid 90s. 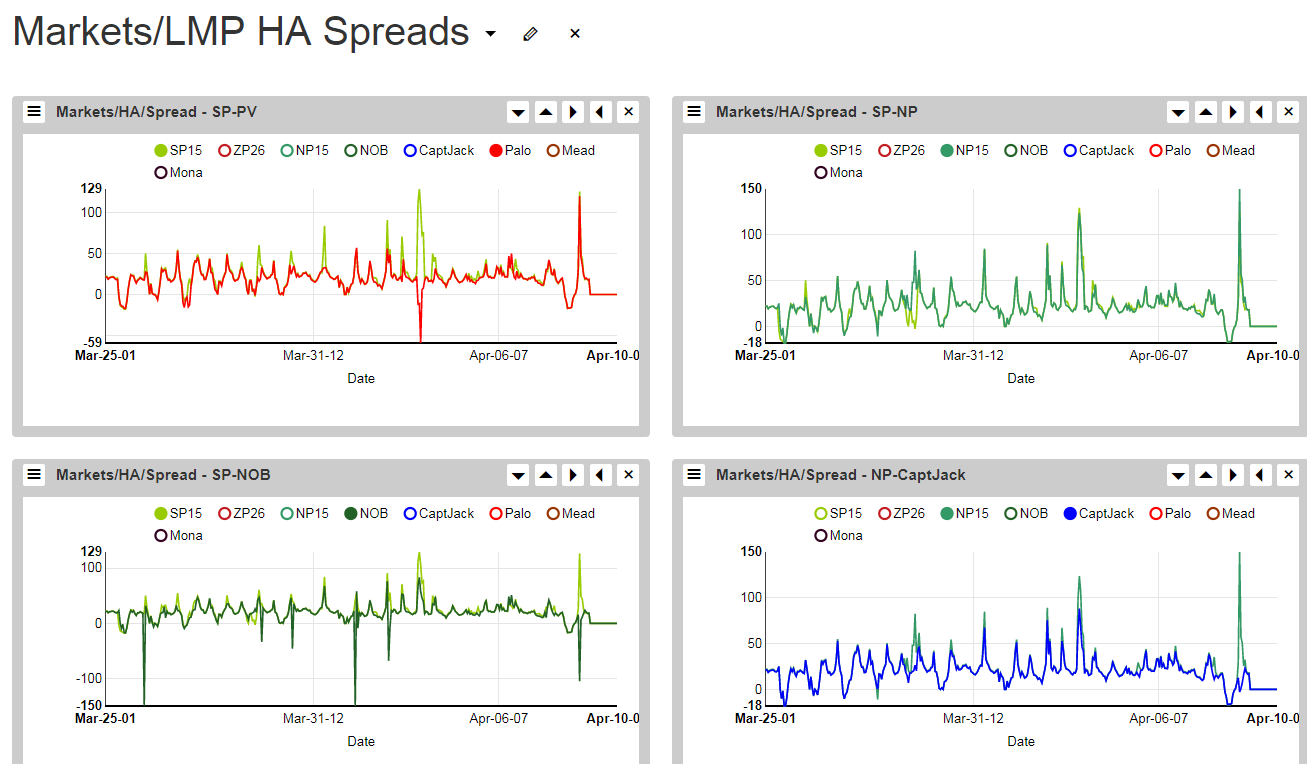 HA is remarkable for how little congestion across the last few weeks – except on the NOB. 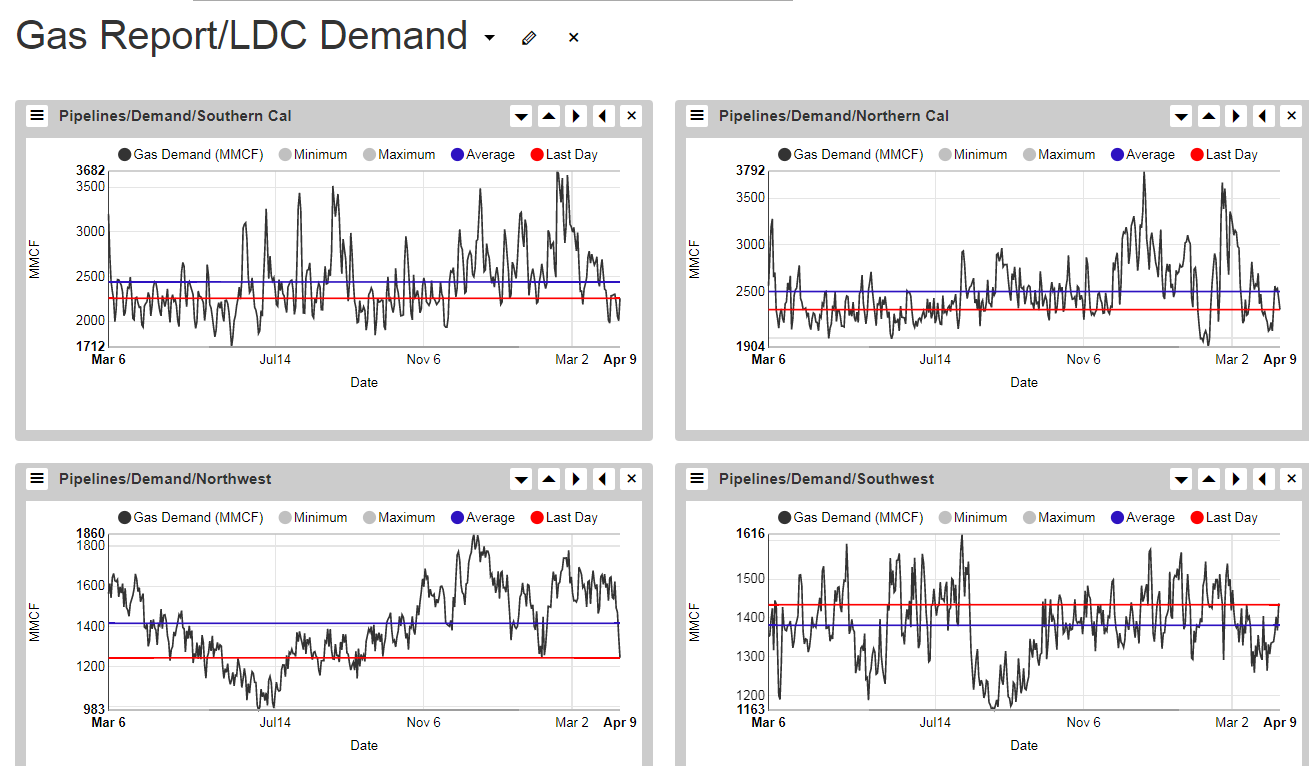 Core gas demand is off across the WECC, the hardest in the Northwest. 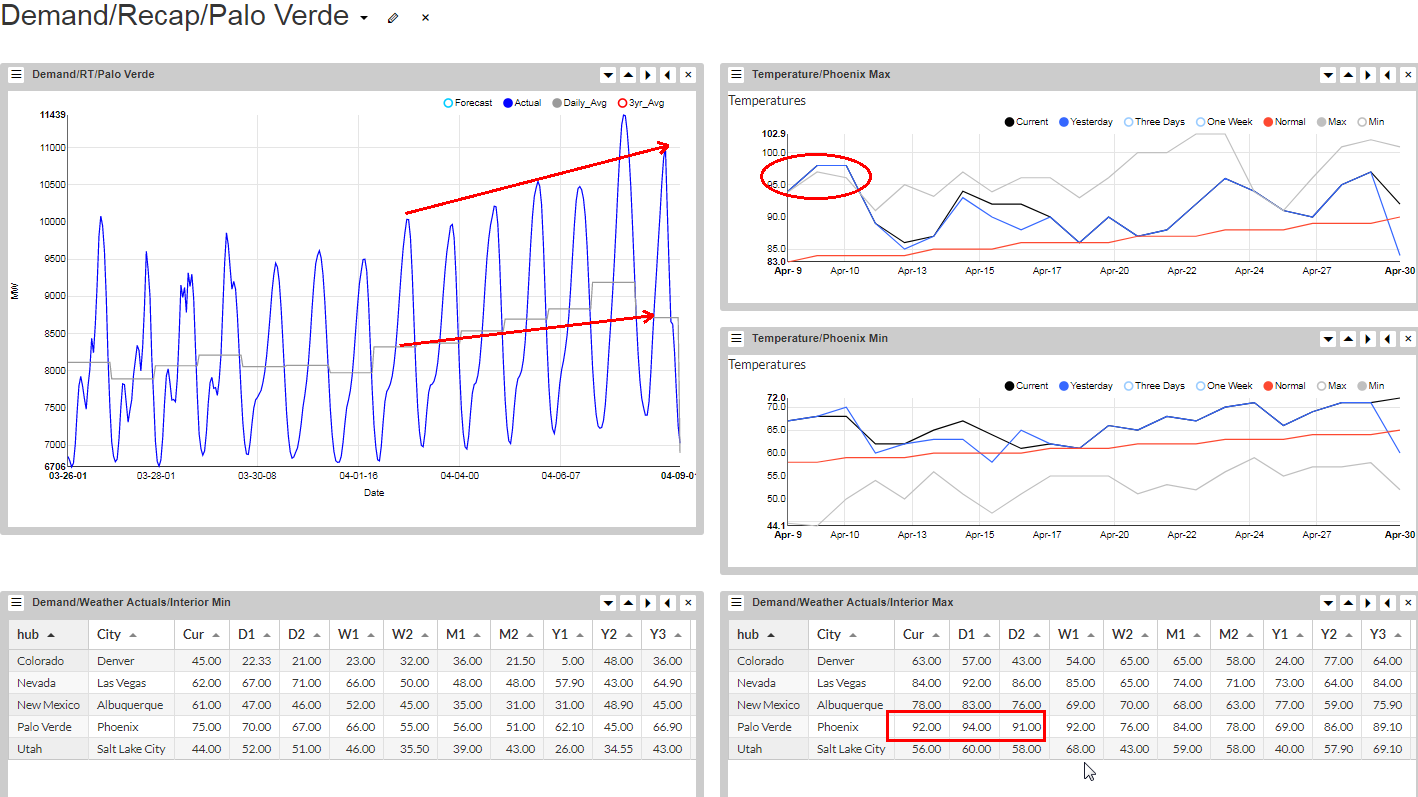 Loads soared at Palo over the weekend, Saturday’s peak was higher than any day of the week; Sunday was nearly 2000 MW higher than a week ago. Temps are forecasted to stay hot for most of the week, on some days setting 10 year highs. 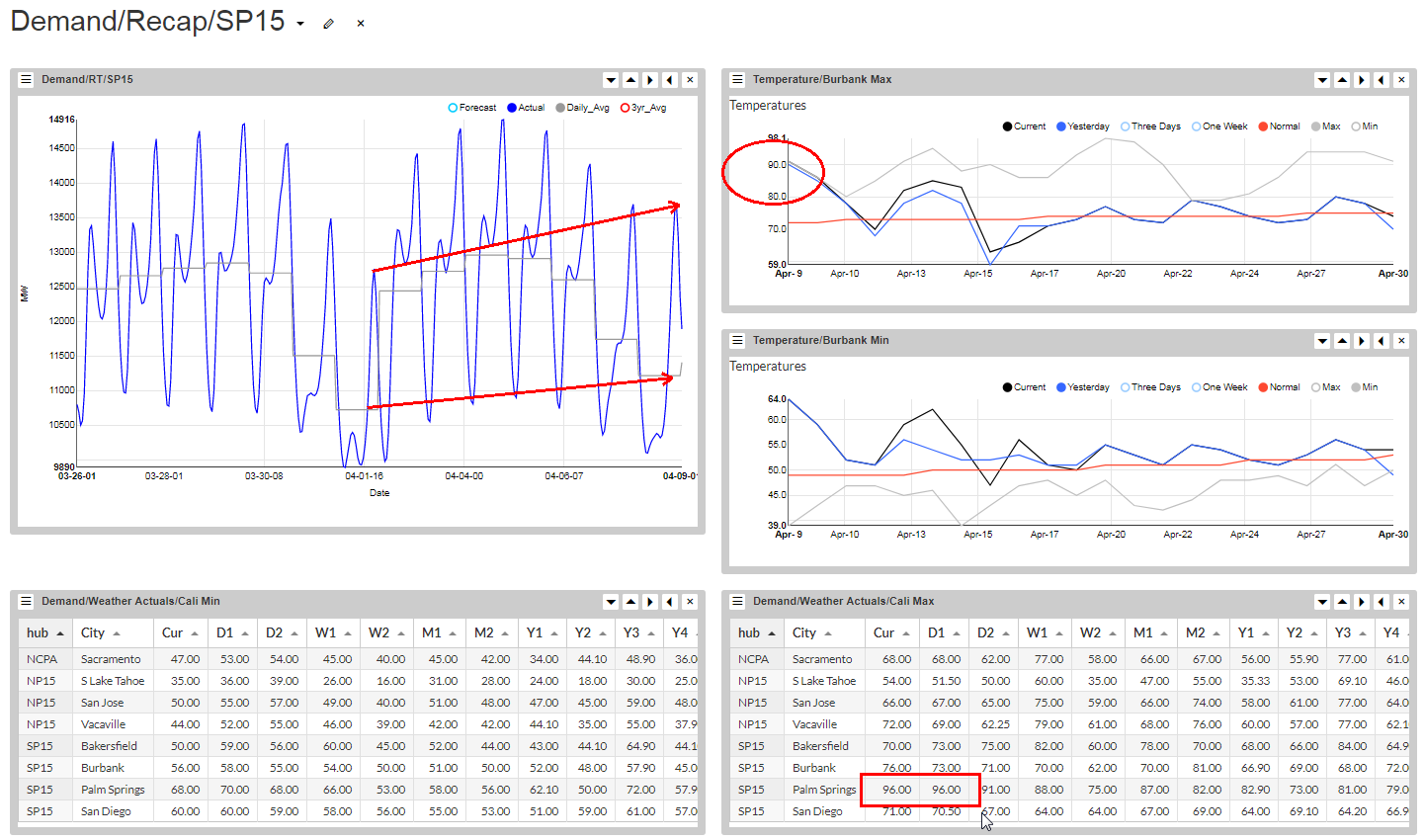 SP’s loads are up too, but not as dramatically as Palo. The heat is short-lived, perhaps a few days in the 90s than back to the 70s.

NP loads are up ever so slightly, the temperature outlook is just normal for the foreseeable future. 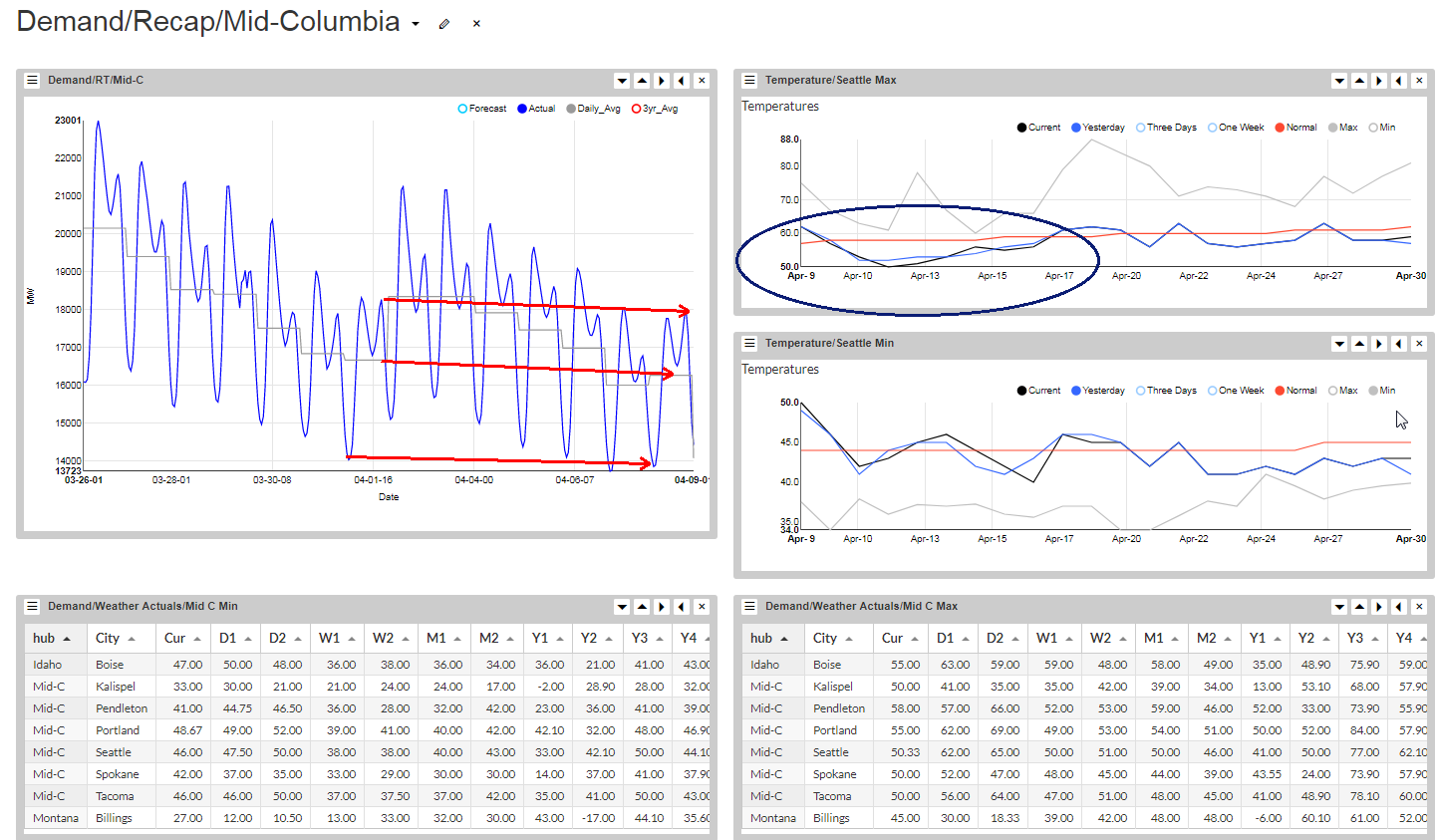 Temps in the Northwest, at least Seattle, are projected to grow colder. Loads are off just a bit, week-on-week, and should rally off of cooler temps. Even normal temps are starting to drive the start of runoff, but these aren’t even close to what will be needed to crush the MidC. 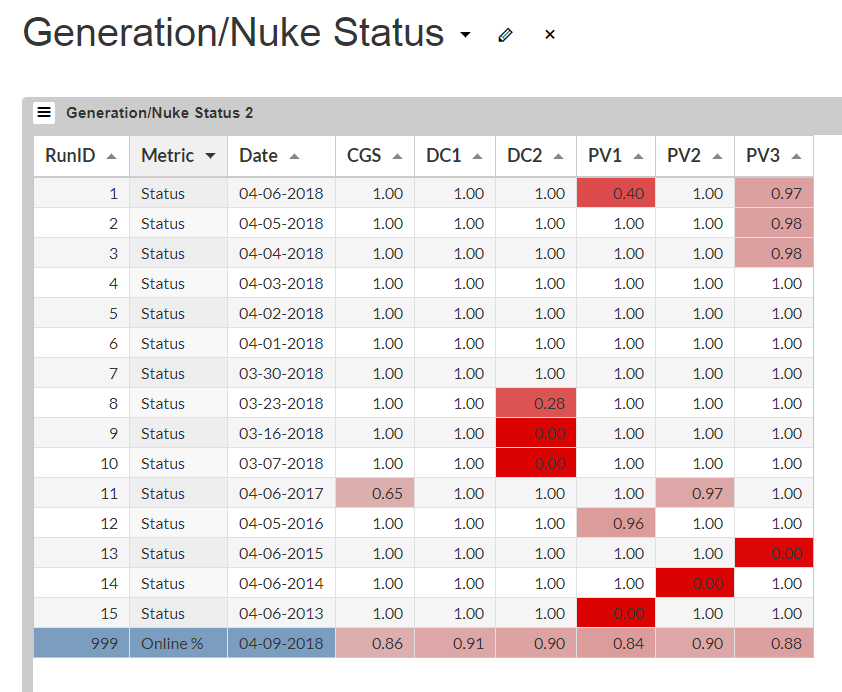 Problems with Palo nukes, we suspect one is going down for refuel.

More cool than not, normal to maybe above precip? On the precip, don’t really see anything close to normal: 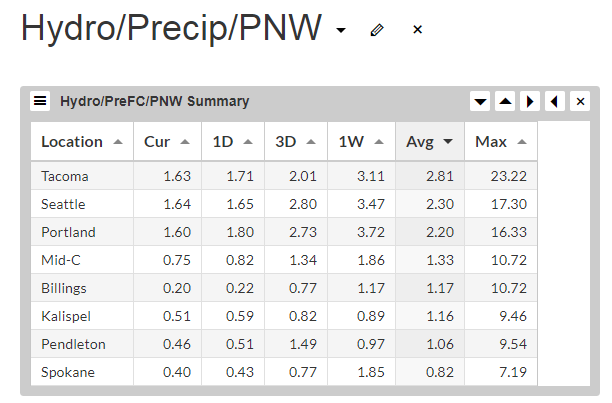 The normal for the MidC Composite is 1.8, the next ten days will see about 0.75. Still, its cold and whatever comes down will arrive as a solid and SWE will continue to build. 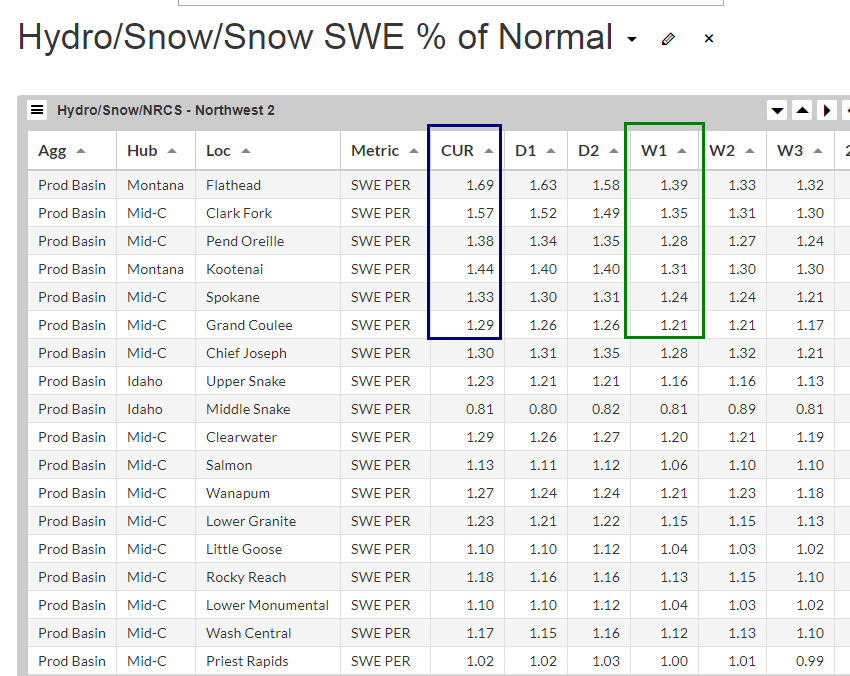 These are crazy anomalies, on the Flathead and Clark Fork. Avista must be rubbing its hands in glee; Cabinet Gorge and Noxon may post their highest Q3 plant factors ever.

This is the week that the COE will post its last relevant flood control draft guidelines. The Corps uses Apr-Aug:

And these are off the charts; the rally is nearly 10% from last month; expect Coulee to draft to 1220′. Even that level won’t be too challenging, as long as temps stay cool.

Surprisingly, Coulee pulled seven feet and its net discharge dropped. Speaks to how tight the Northwest is – river-wise. 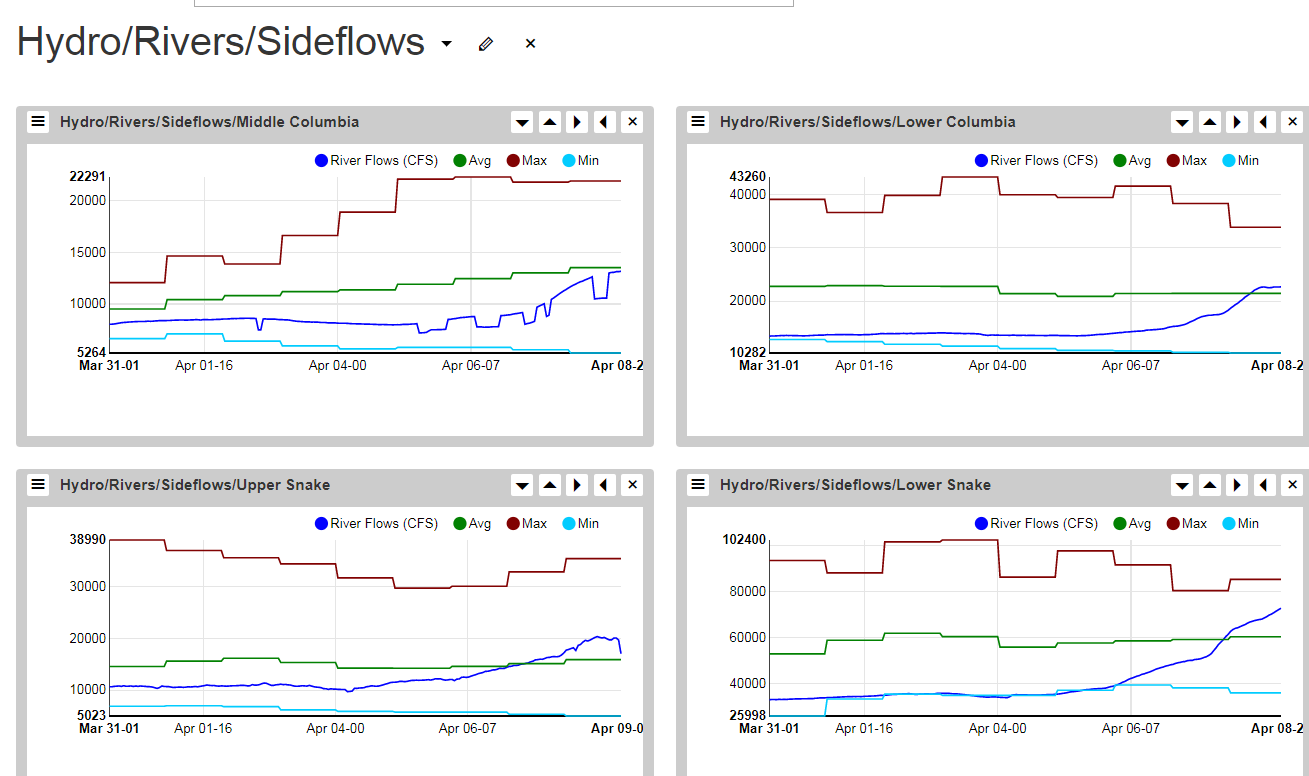 That’s changing, albeit slowly – the Ansergy Sideflow Indexes are all rallying. Bear in mind, the Mid-Columbia Index will peak around 50-60k, so this bump is literal noise. 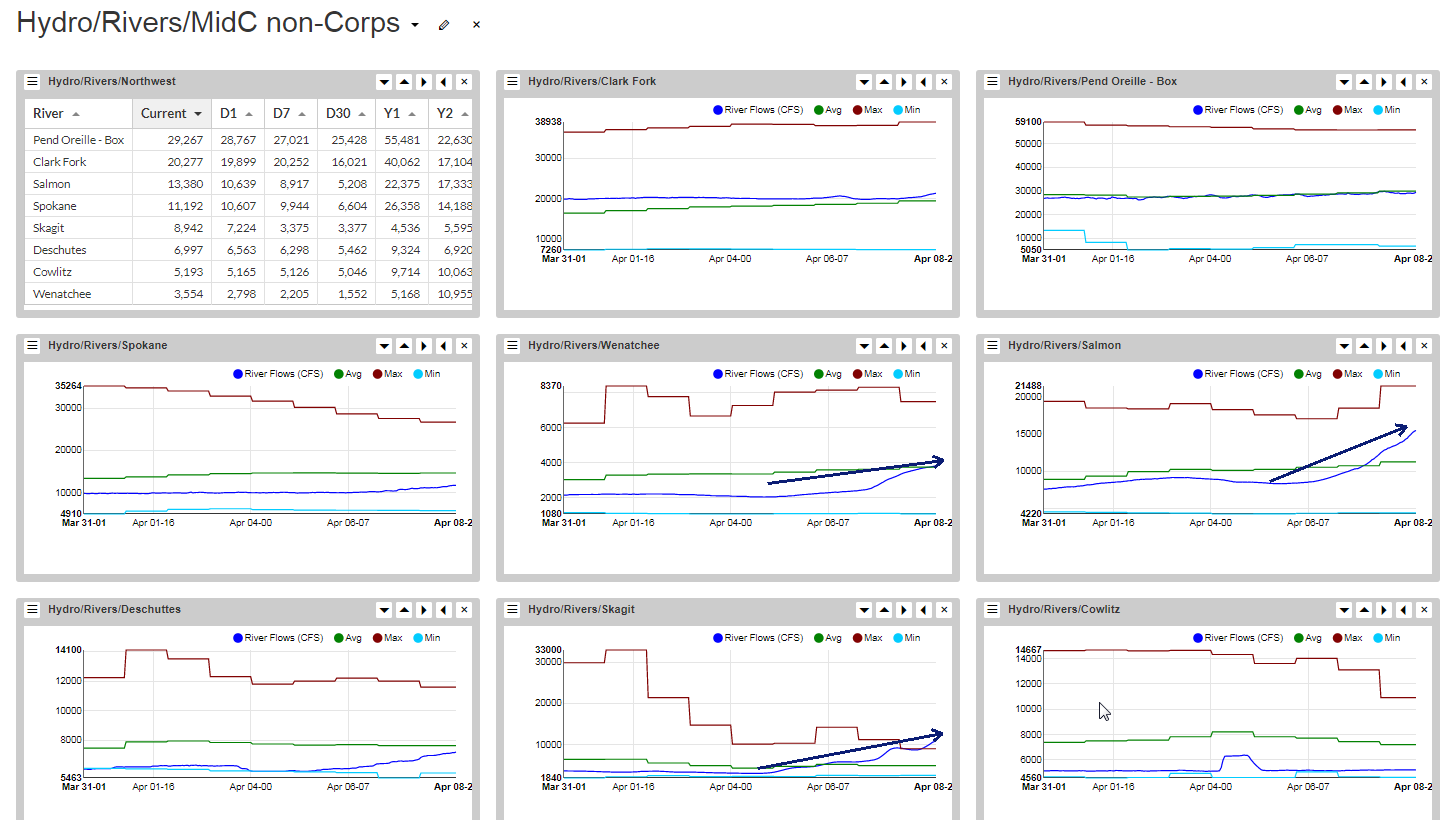 This collection of projects are all non-federal, mostly unregulated, and they too are showing some upticks. 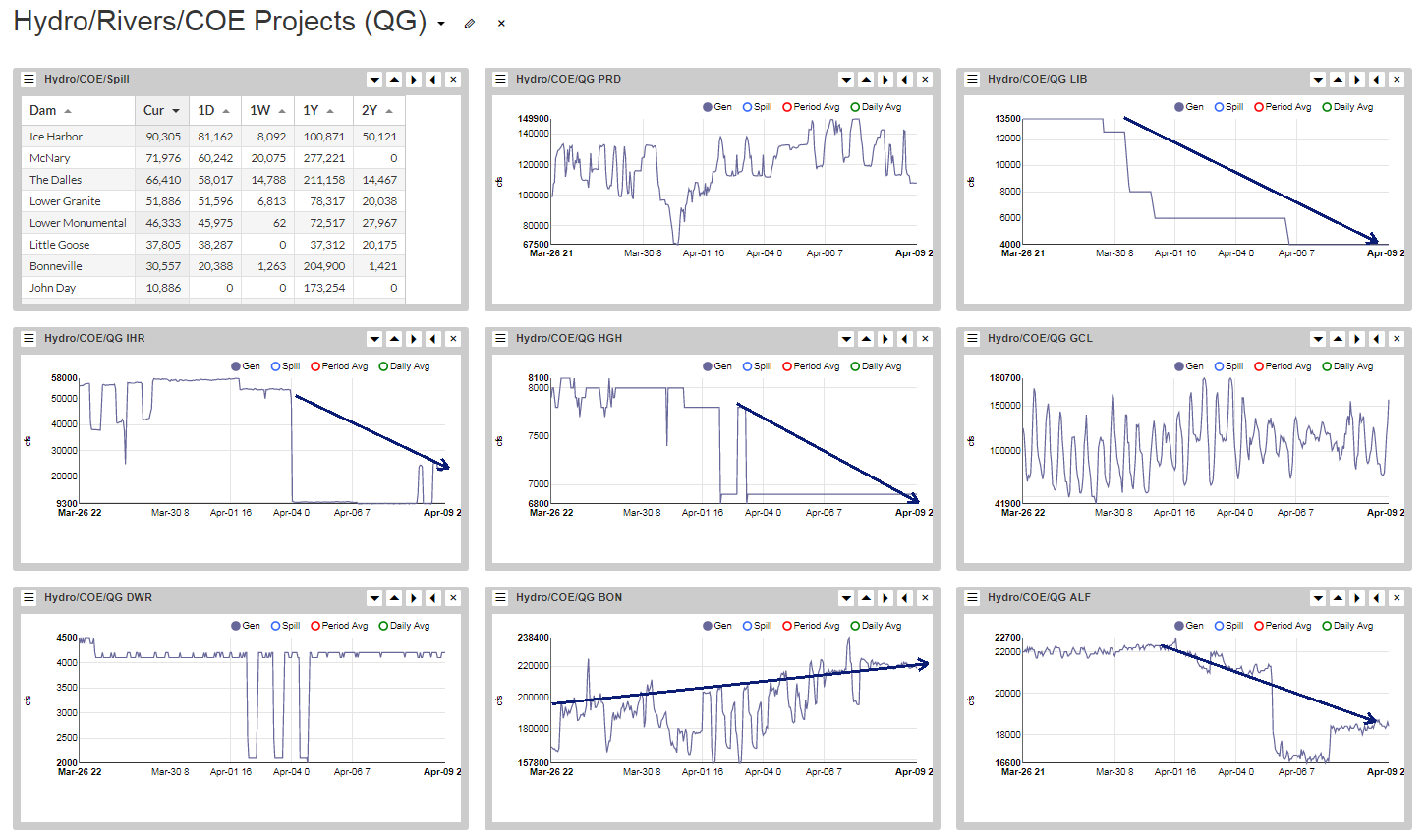 The big regulated projects in the Northwest are more down than up, but much of the cuts can be explained by the start of the federal Fish Spill. These are still relatively weak, but much of the new inflows will go over spill gates and not through turbines. 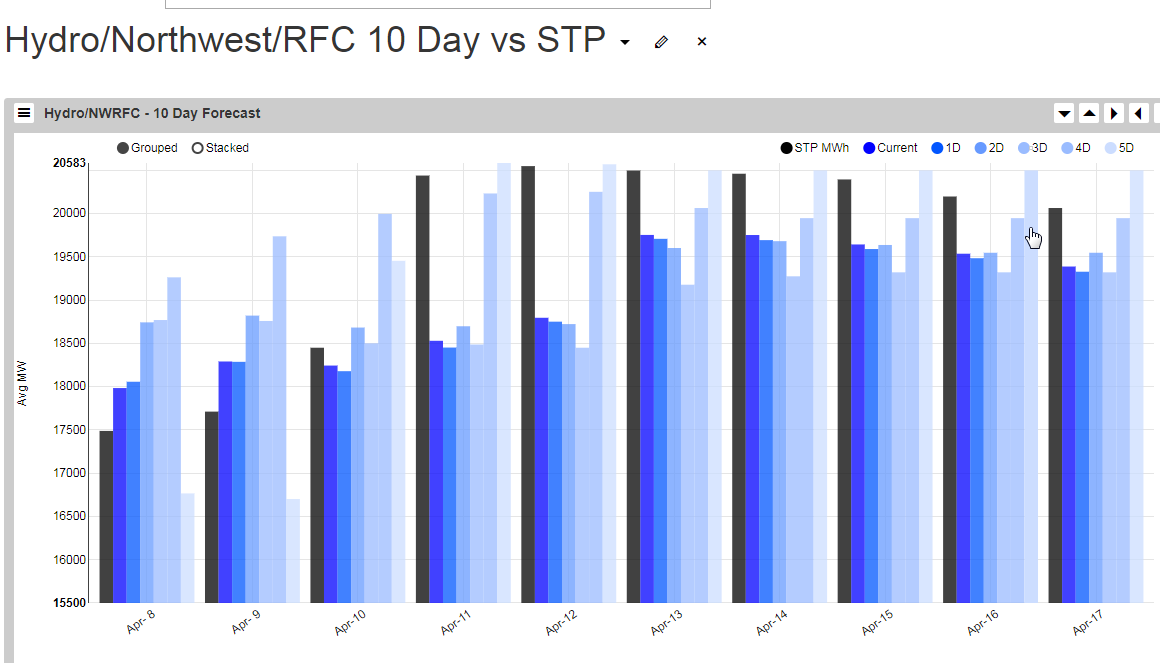 Today is Monday, this afternoon we’ll enjoy the latest installment of the STP. if the RFC’s 10 day forecast is a tell, then you should expect cuts in BOM. Most of the next six days are 1000 aMW to 2000 aMW below last week’s STP. However, if they cut while snow is building, they’ll need to add somewhere, We’d prefer seeing the builds in June-August, but doubt May escapes unscathed. More on May in the next post. 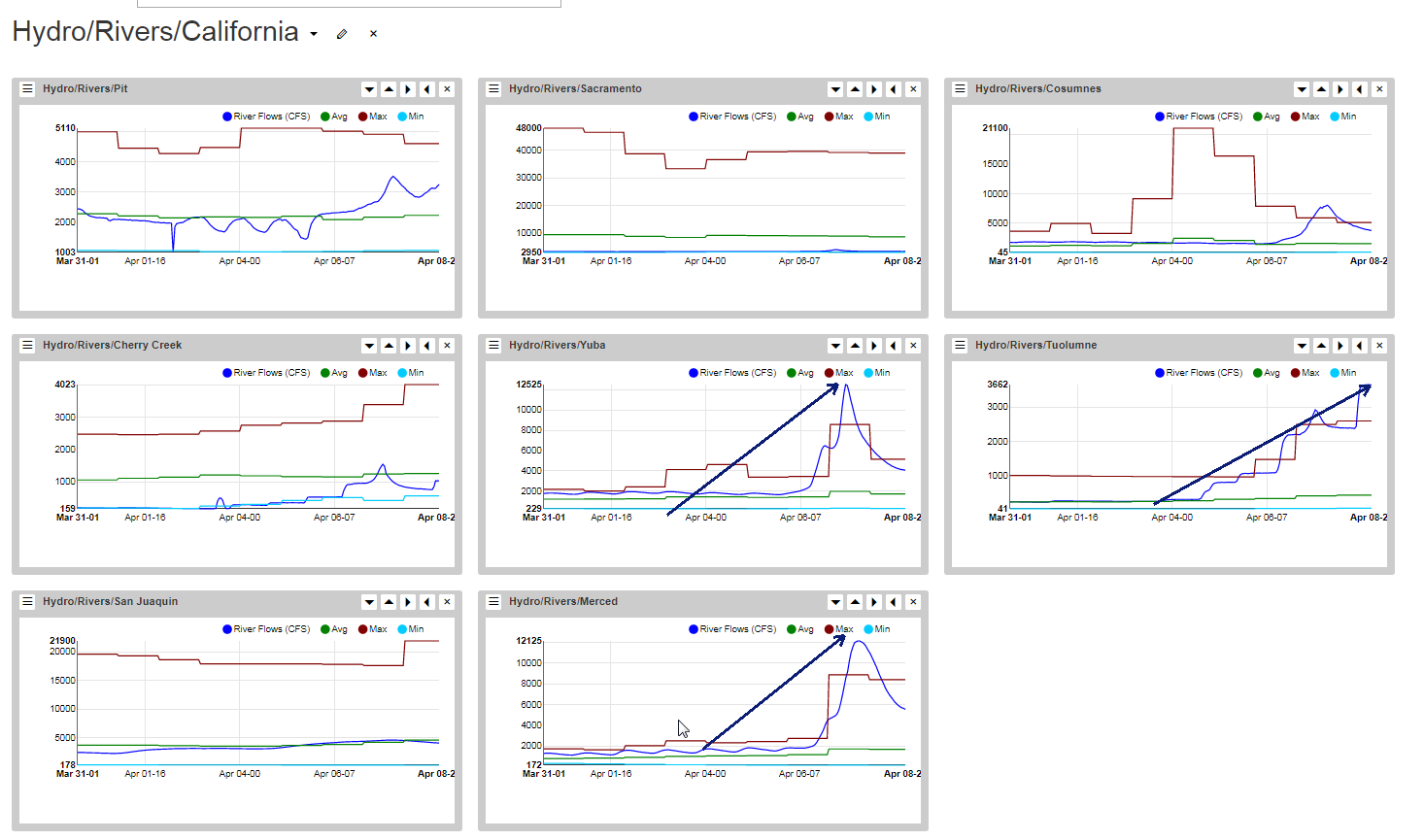 This “heat” in California may be driving loads up, but it is also creating the state’s first freshet. Flows are up sharply at several important rivers.

And so is Cal ISO hydro energy; the ISO is posting over 1000 aMW more hydro today than a month ago. Doubt we see these go down for at least another month. 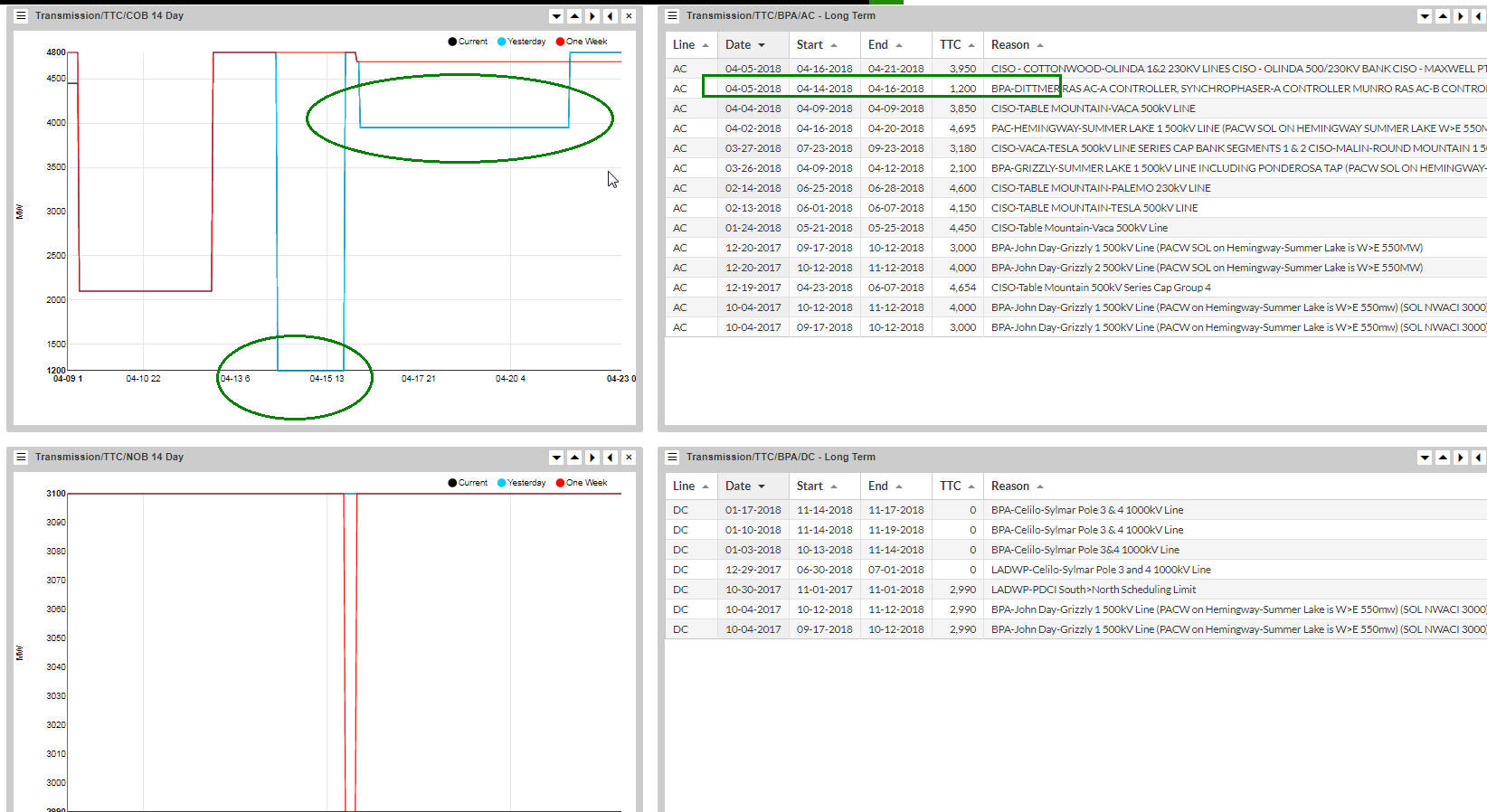 The AC will see two days where TTC is cut to nearly 1000 MW; there are a couple minor tweaks to outages on the AC this week, no changes on the AC. 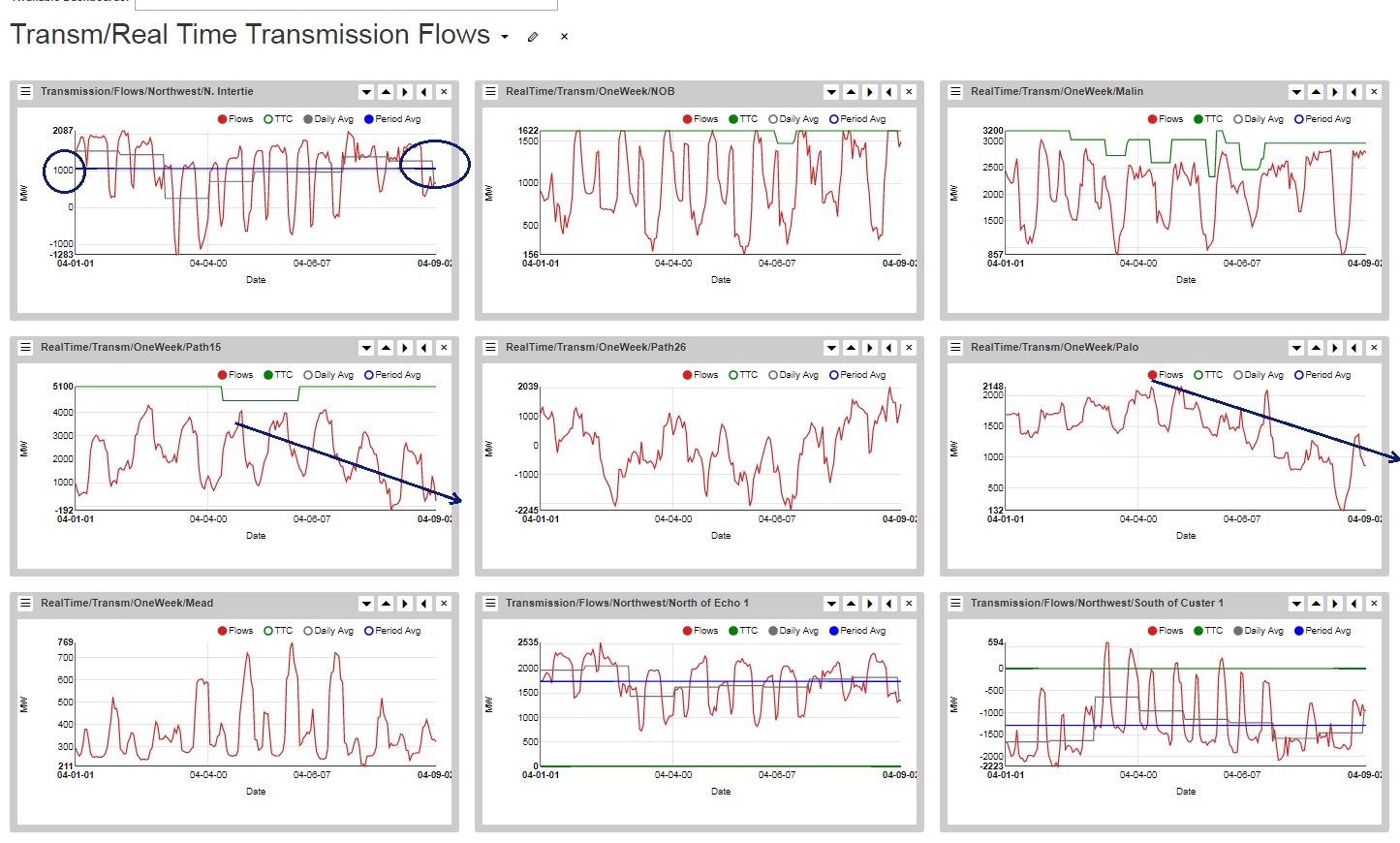 Flows on the Northern Intertie remain north-bound; the two week average is over 1000 aMW. The AC can’t quite get to TTC, its like one of the rights holders isn’t trading their piece. Flows on Path 15 cratered, so did flows out of PV to the ISO.

The biggest takeaway, for me, is this – Writing a blog five days after surgery is painful.

That whine aside, the southwest is very bullish with hot weather and nuke troubles. The ISO flirts with some bullishness when LA posts the 90s, but the state cools off and is now flush with an extra 1k aMW of hydro energy.

The Northwest is mired in a “cold-snap” that doesn’t appear to be snapping out any time soon. Cold equals deferral, what would be passing through the system in April now must go in May-August. As long as April stays cold, May becomes ever more interesting from the buy-side.

The next post will be in 4-6 hours- after the oxy wears off.