A new day, nearly a new month, and a new season – it’s spring! Last year the Northwest was awash in water, the Southwest had realized several days of 90+; not this year, the Northwest is dry, would be bone dry if it weren’t for regulated drafts, and Phoenix has yet to post a single day in the 90s. Some of that is changing; the Southwest grows warm, but not the Northwest, though the latter stays more on the dry side for another week.

Let’s get the weather for dummies out of the way, right up front. Quantities of precip matter less and less, the deeper into the calendar we travel, yet dry is dry. Most interesting is the southwest heat, Phoenix will approach ten-year highs, though this is a desert event, little spills into the LA basin.

What heat does reach LA may not do much for power demand, but it will crush all core gas demand and may finally put the nail in the Socal Gas Citygate’s hype-coffin. We already see premiums dissipate:

Some of this DA LMP collapse must be from spot gas, at least inside Socal Citygate, but that doesn’t explain the miserly negative prices realized Saturday. This is DA, and even Captain Jack cleared negative, there was no congestion. 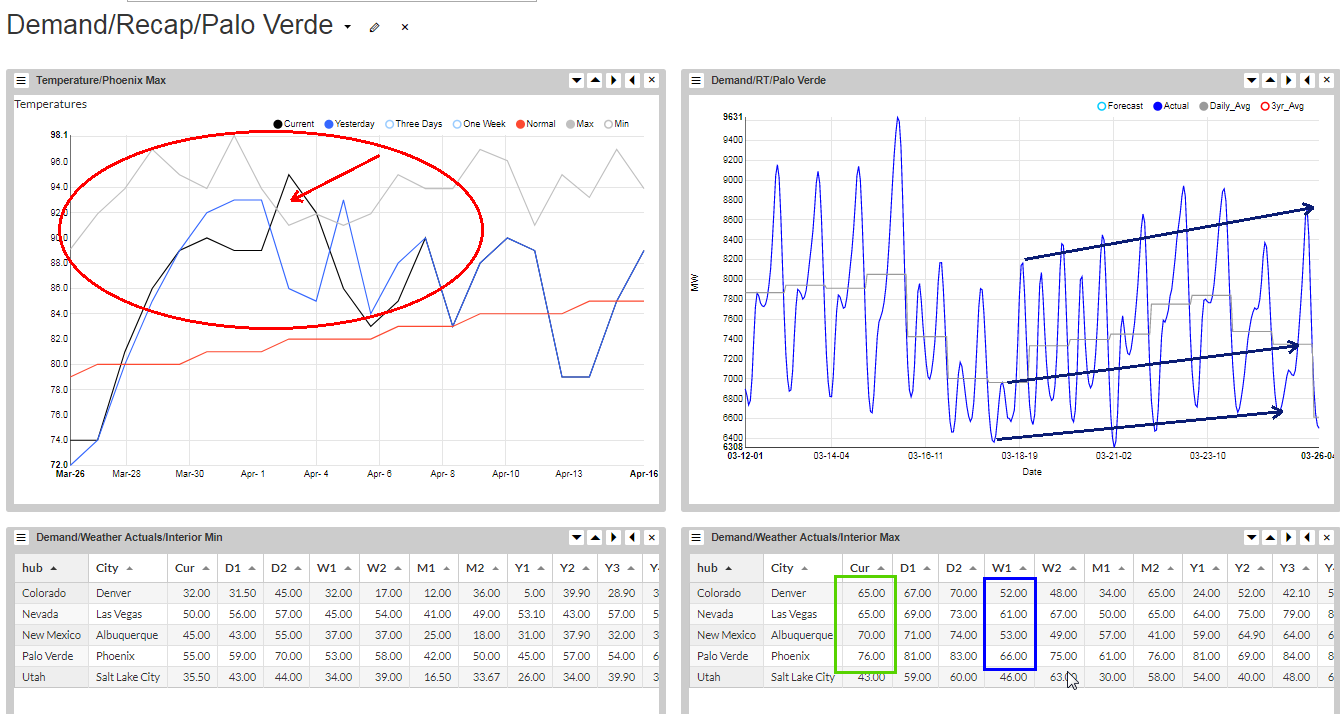 Palo’s loads rallied, week-on-week, but nothing like what is about to happen – check out those Phoenix highs, ten-year record highs may be set. They are already firing up gen in eager anticipation: 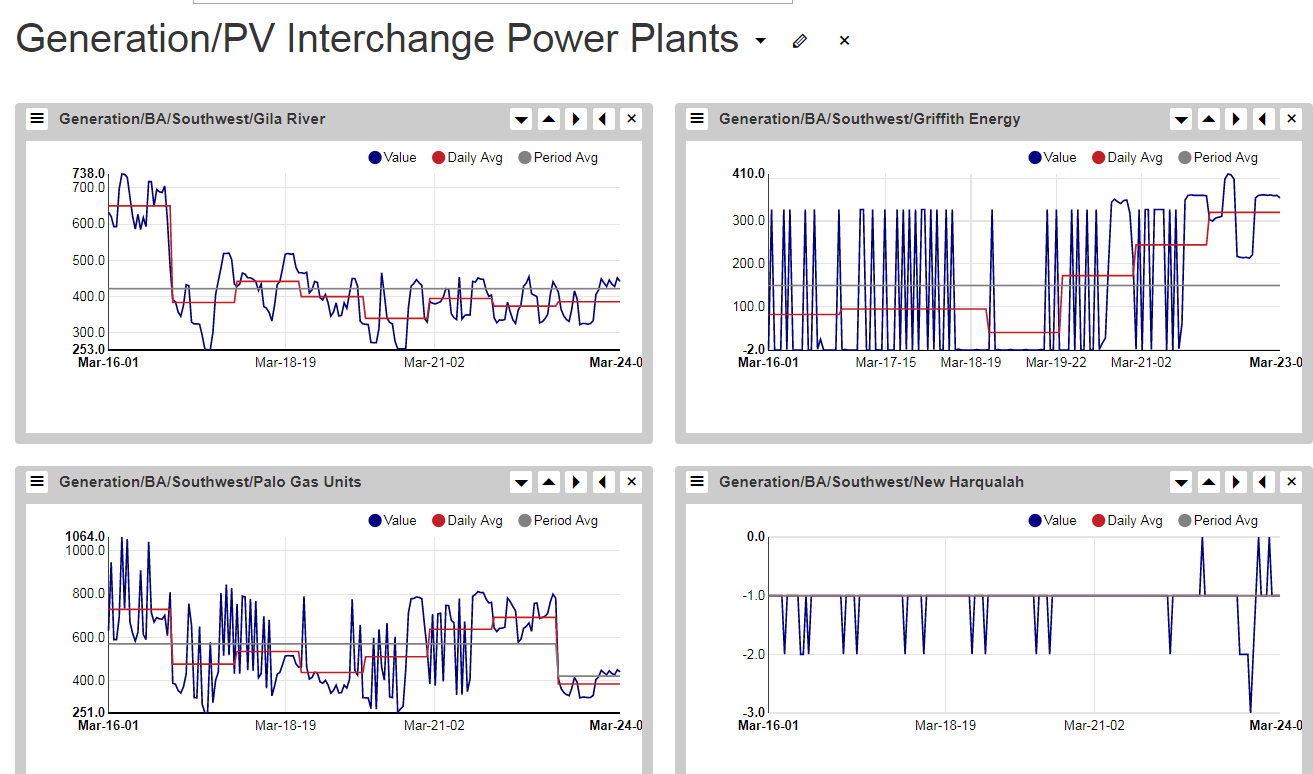 Griffith can’t make up it’s mind – on/off/on/off – now, the last couple of days, it is just on. We’d think New Harqualah will join the party later this week. 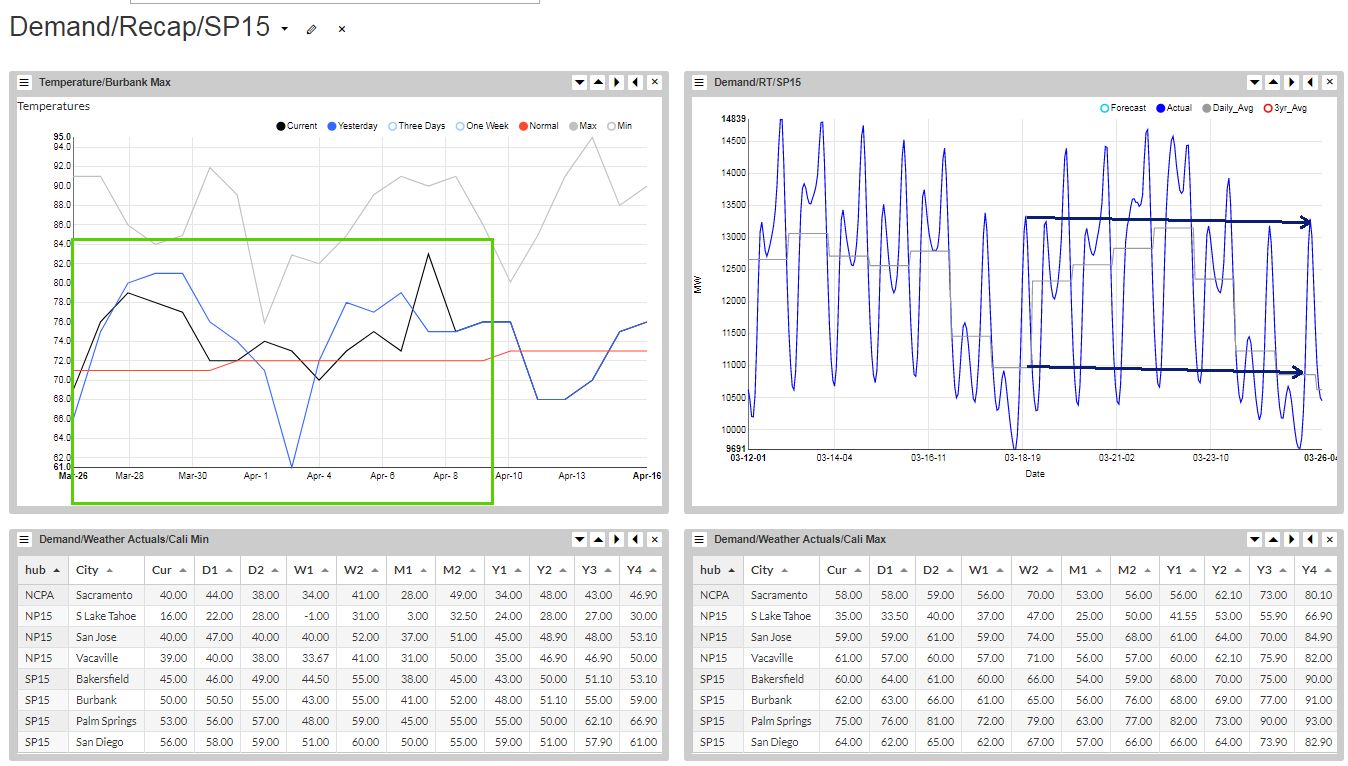 SP warms, but isn’t hot and doesn’t even come close to its highs. Loads are sideways; I think I’ve said those three words for the last two months. It may be warm enough to fire up a few ACs, but doubt we much of a load rally, not unless it gets warmer. 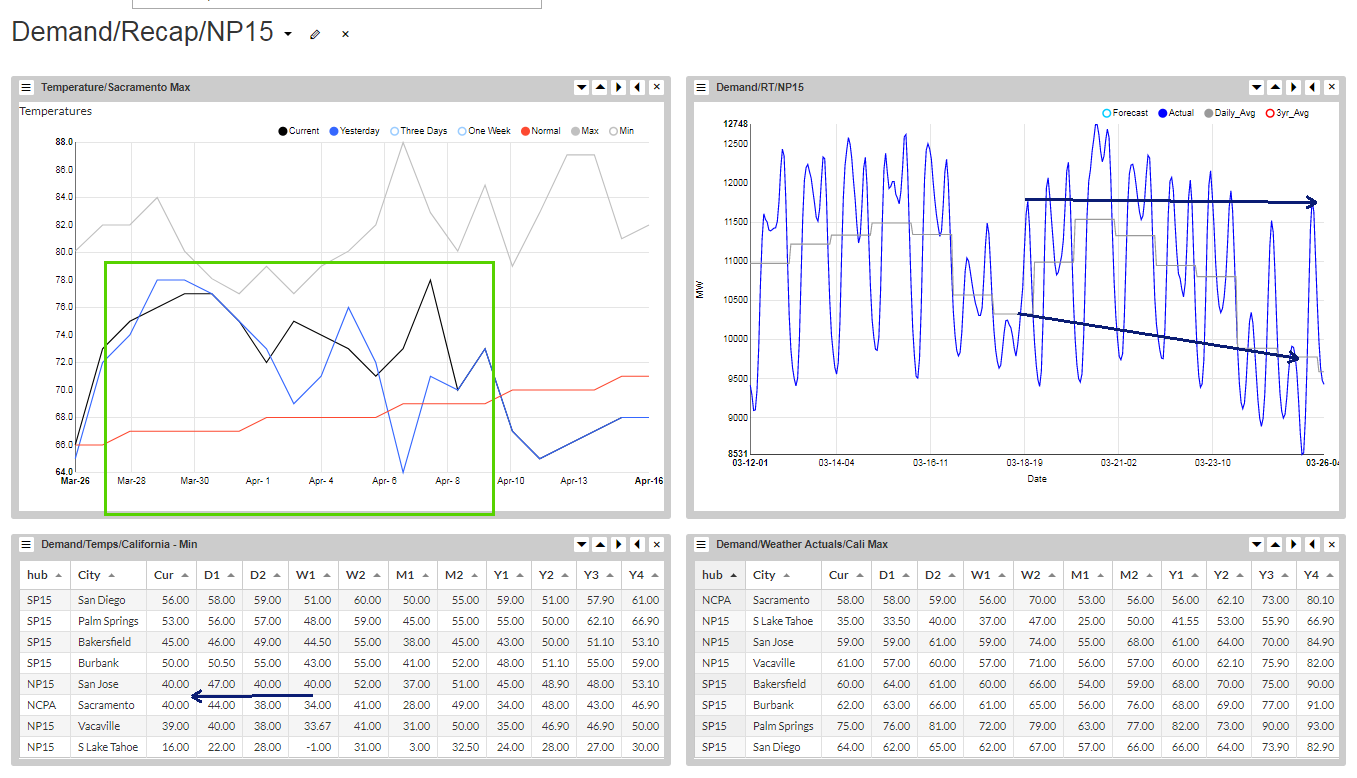 Sacramento is just lovely for picnics in the park, but won’t help your BOM or PROMPT long position. Peak loads are off; average loads are sideways. This warming will have implications, perhaps, for net energy via lower elevation snow melts, more on that in the hydro section. 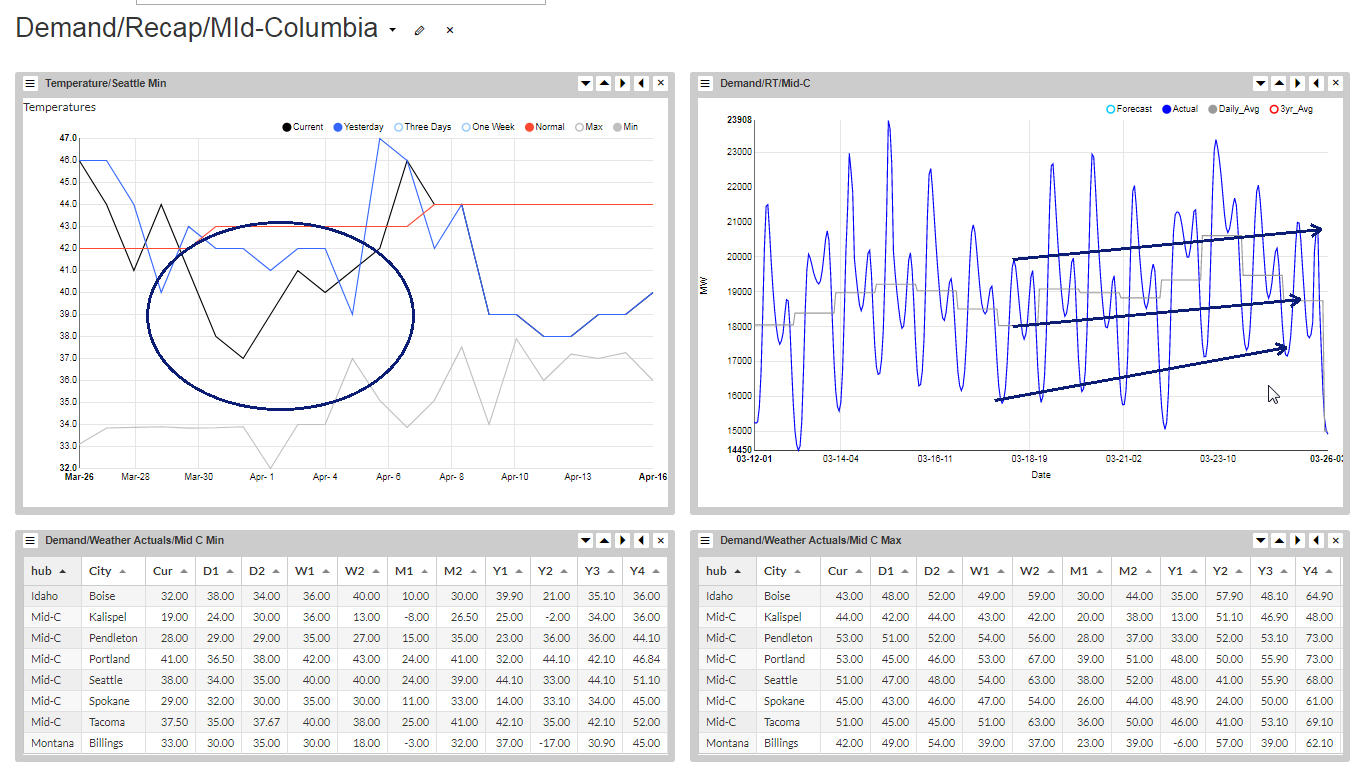 We use the Seattle plot for our load barometer and its cold; a string of days well below average, and that is bullish for net demand, bullish for stream flow. The hub’s loads are up in all indicators: average, peak, min. They will rally yet more as we morph into April. 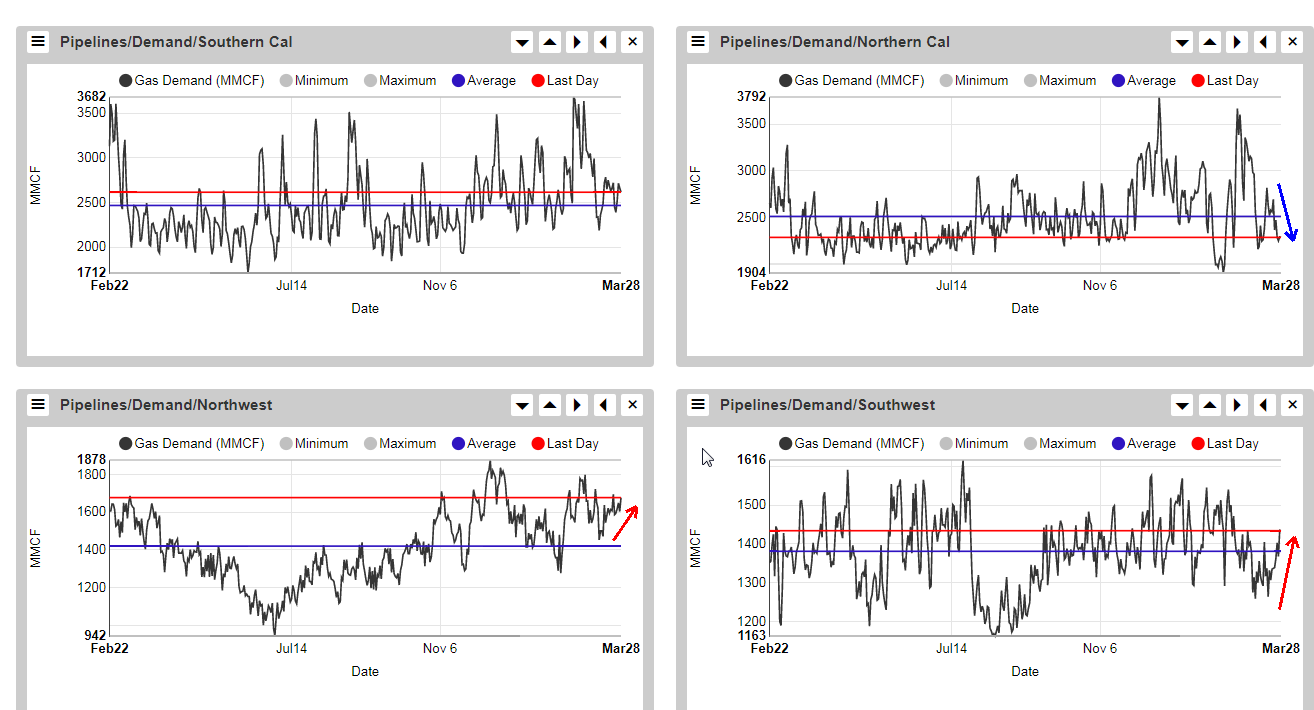 The Ansergy Gas Demand Index is up outside of California and sharply down at NP15; sideways as socal. 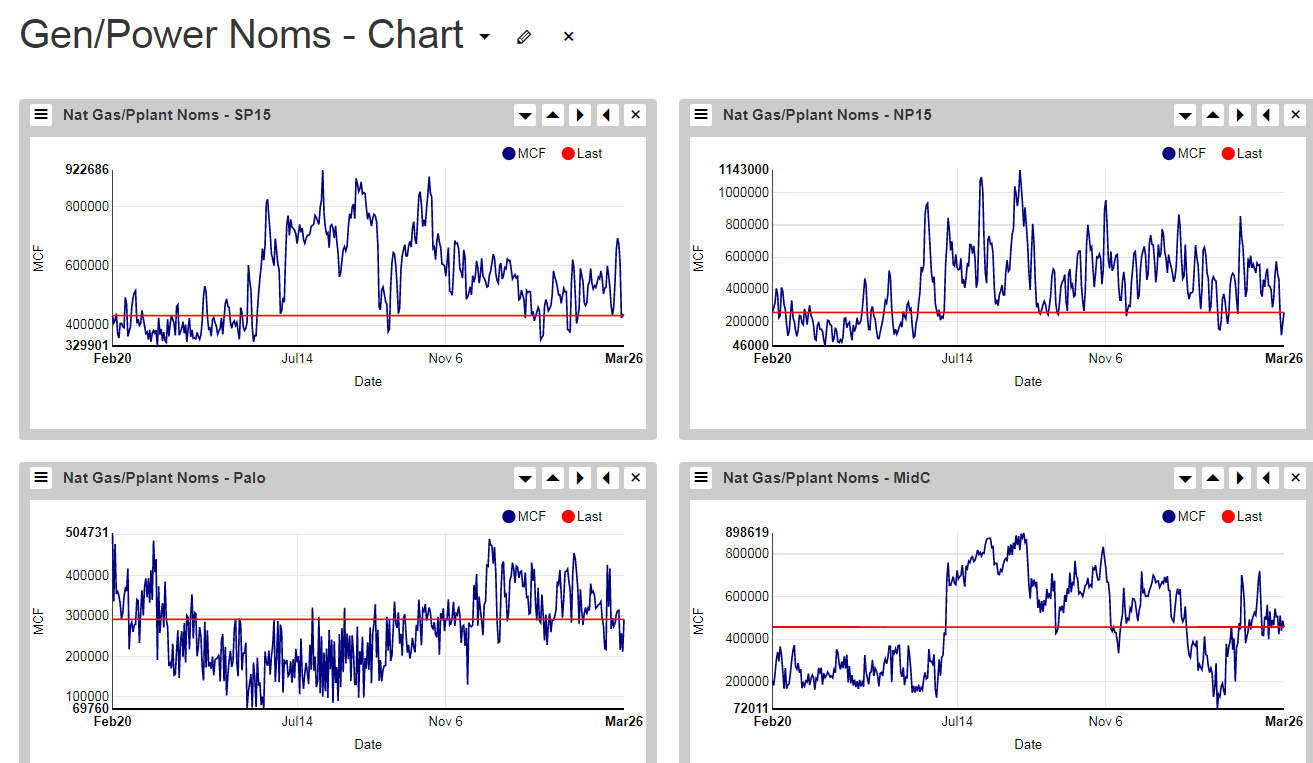 Noms (power plant) are off across the WECC. 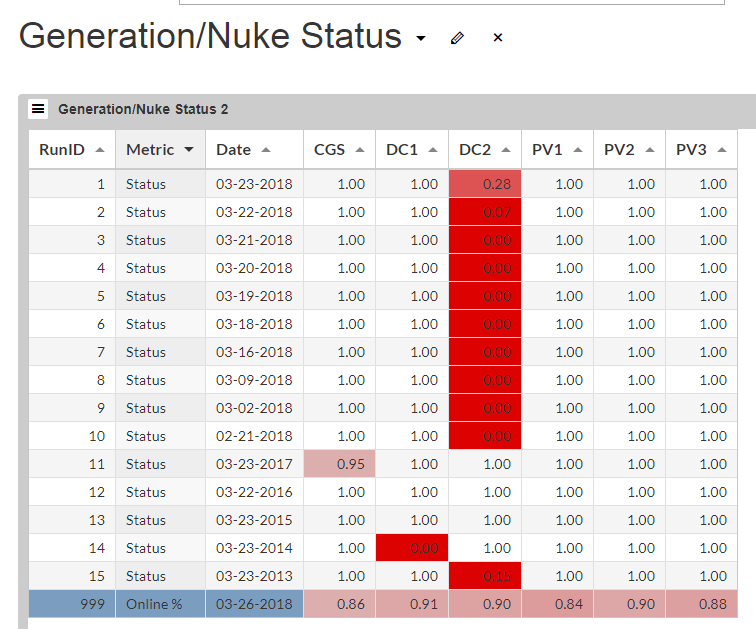 Diablo 2 is at 93%, having returned from a refueling. 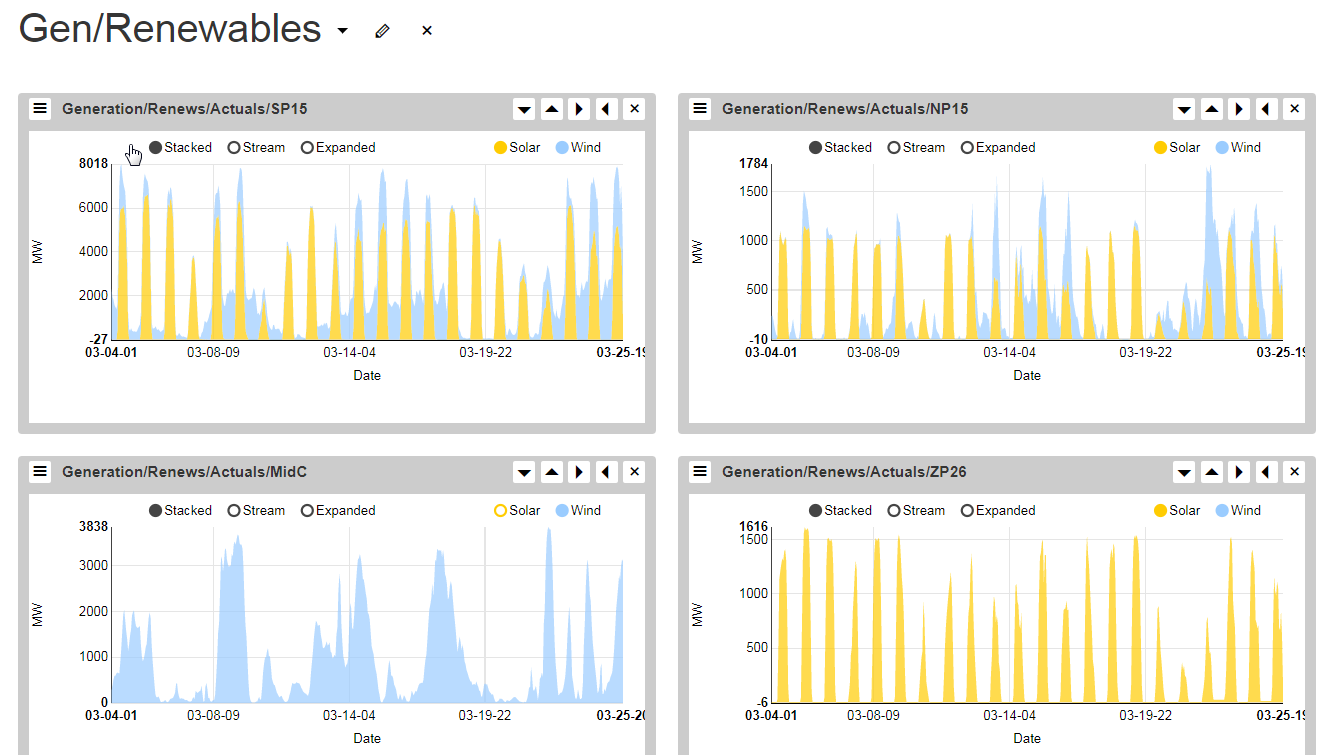 Renewables are more bearish than not, strong wind in both Cal and the PNW, though the latter’s production was spotty. Still, the weekend saw robust renewables. 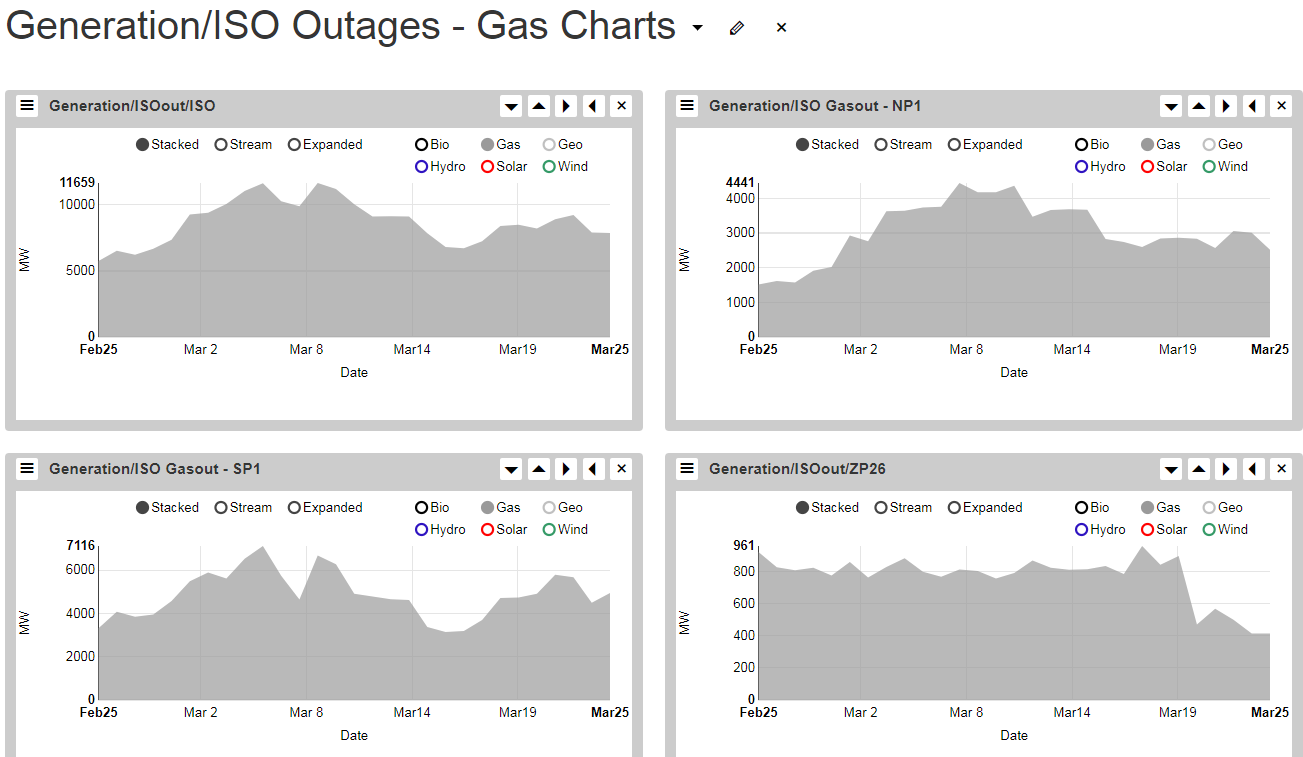 Gas outages inside the ISO are sideways, except for zp which is off.

The snow year is pretty much a lock as of the end of March; all that remains is how soon will it melt. Sure, we can see more builds, but we’re not. What we are seeing is what we’re not seeing – melts.

Despite realizing about 40% of normal precip over the last three weeks, the PNW has the same SWE anomaly – because it has been colder than average. Typically, the freshets on the lower elevation basins would be starting or started. They haven’t, so the anomaly remains the same, and it is quite large. The last meaningful flood control targets will be released in two weeks, doubt we see any significant changes. Coulee will draft to the low 1230s, high 1220s, and it won’t be that big of a deal if it stays cool.

We’ll be using the above dashboard in most of our posts for the next couple of months. This is a collection of min/max for three PNW interior cities. Warm anomalies will trigger the melt, we don’t see any above Coulee, though Boise is slightly above and you can expect the Snake to start a mini-rally.

California, on the other hand, has positive anomalies – and now it actually has snow to melt. Go back to the SWE Table above. The anomaly has nearly doubled in three weeks; the Consumnes is at 94% of normal where it was just 56% at the start of March. All of which means there is snow to melt, it won’t just be a one or two-week event, and now it’s getting warm enough to trigger the freshet. 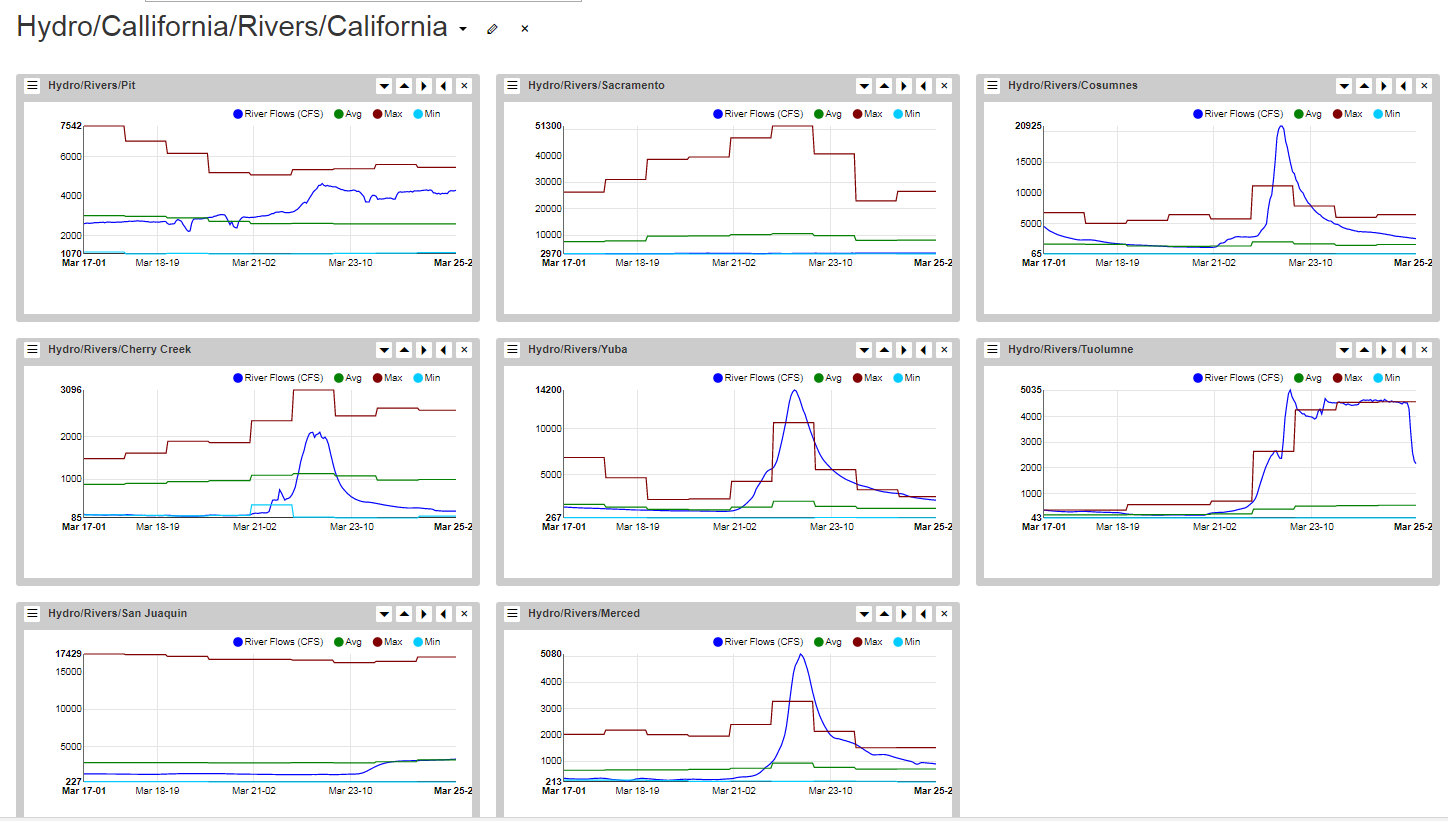 We’ve already seen a big surge in flows on the Cally rivers; that was rain-induced. Warm weather will keep feeding those rivers and put more downward pressure on DA and HA prices.

This is a plot of actual hydro energy production – check out those Off Peak rallies – nearly 1000 aMW more energy today than a week ago. The state goes dry, though: 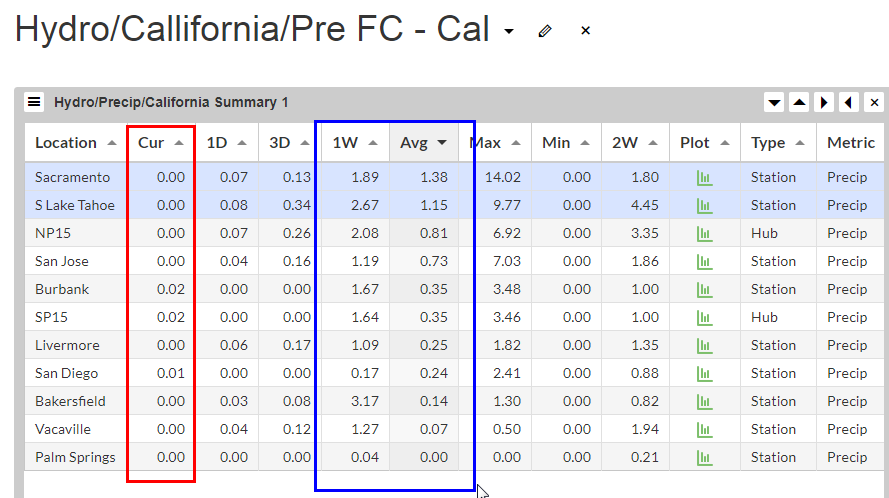 Dry like zero rain; a changing of the guard, a new paradigm. The damage is done, the ISO will be longer in Apr-May than it would have been a month ago. 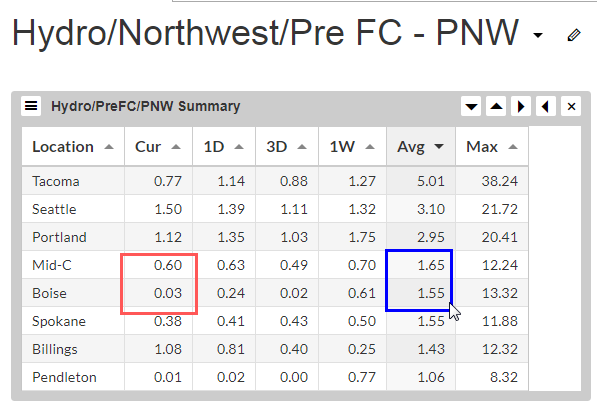 The Northwest will enjoy below average precip for the next ten days, despite weather for dummies plots. Doesn’t matter, the SWE anomalies won’t change because it is cold. Though these extended below normal precip does minimize the June-July deferrals; instead of building SWE it is just going sideways. Not that either of those bullets are bullish, but they aren’t as bearish as they might have been with normal precip. April, though, is indisputable more bullish off of cold and dry, so is May, to a lesser extent. 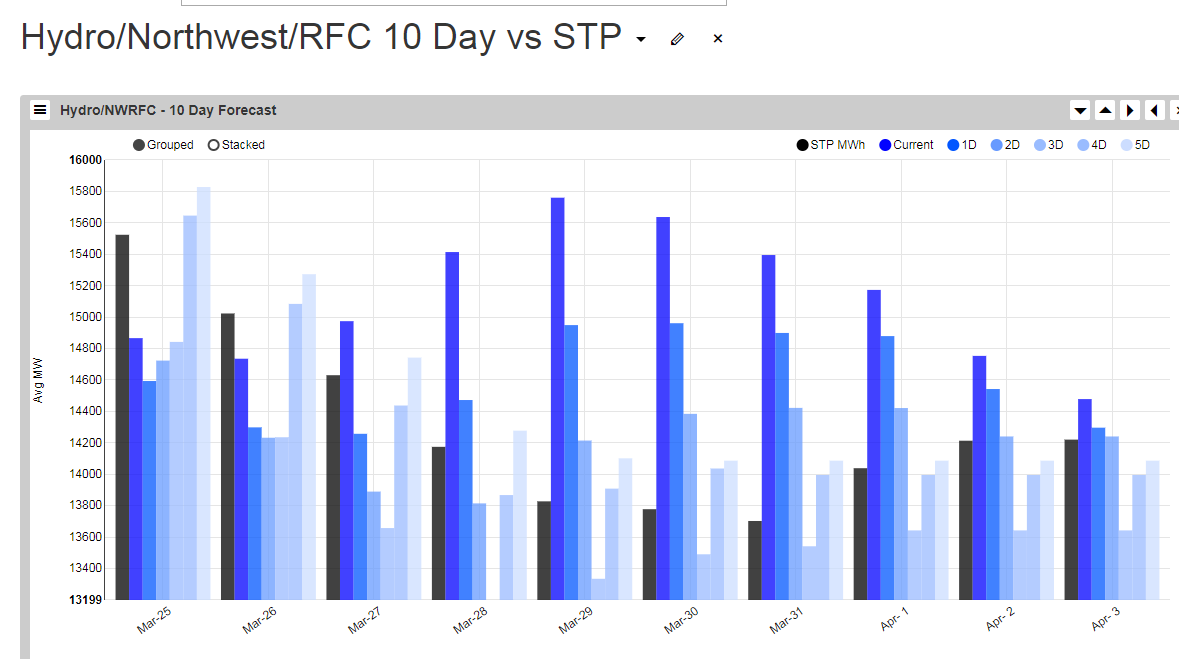 The Northwest Random Forecast Center tossed in some new water for BOM, as of Friday. Not sure where that came from, perhaps just filling a random hole they made earlier. 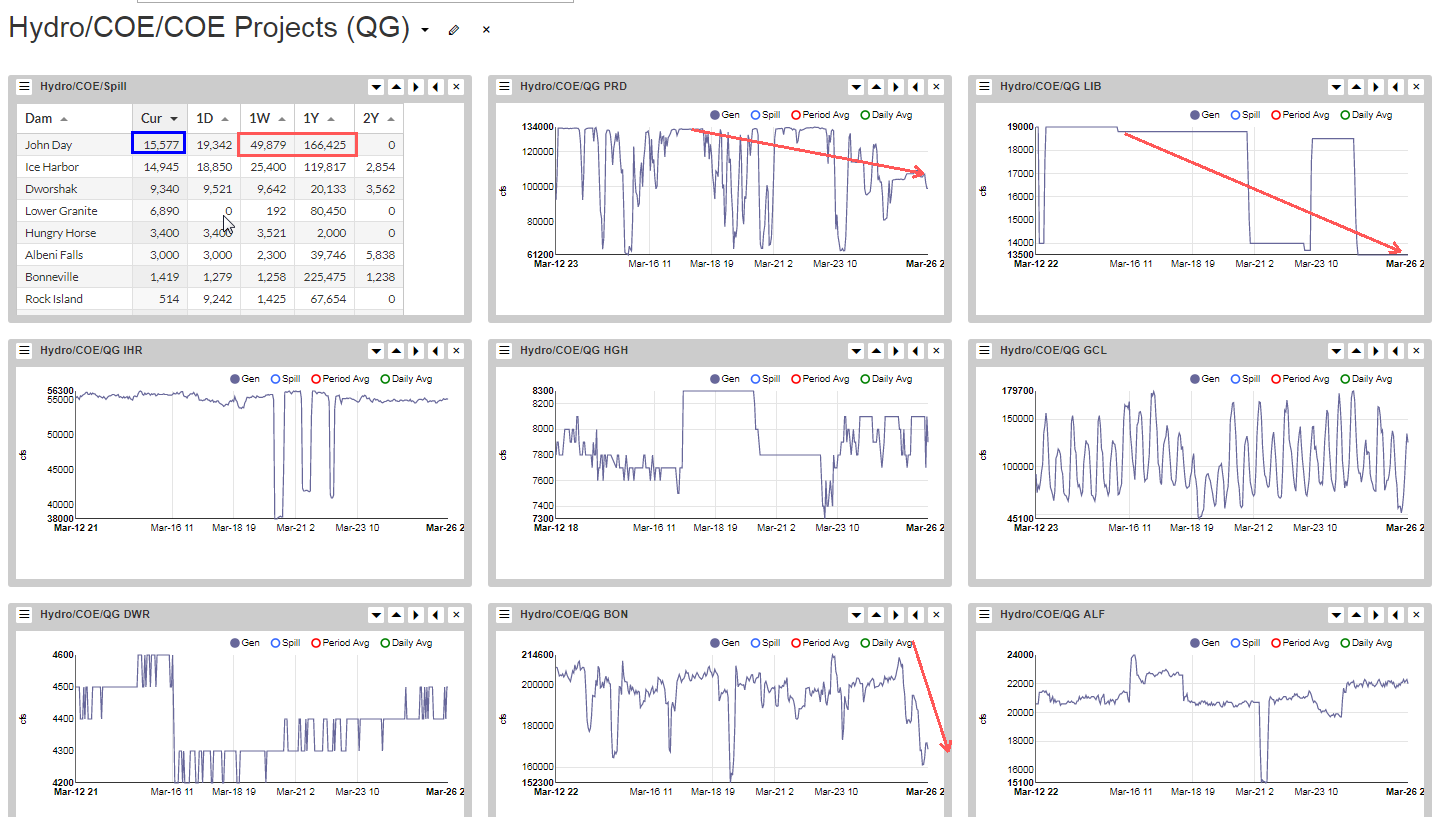 All of these are regulated projects and don’t mean much; BPA drafts, BPA doesn’t draft – and the chart changes.

It looked, last week, like BPA was backing off the draft, but didn’t over the weekend, they pulled another two feet out of Lake Roosevelt, now that reservoir sits at 1249′, just a modest 21′ to pull over 35 days —- yawn. With the feds staring at dry/cold for the next ten days, their new problem is finding water to serve load. I’d expect GCL to pull hard to serve these surprise HDDs next week, leaving the rest of BOM yet ever tighter. 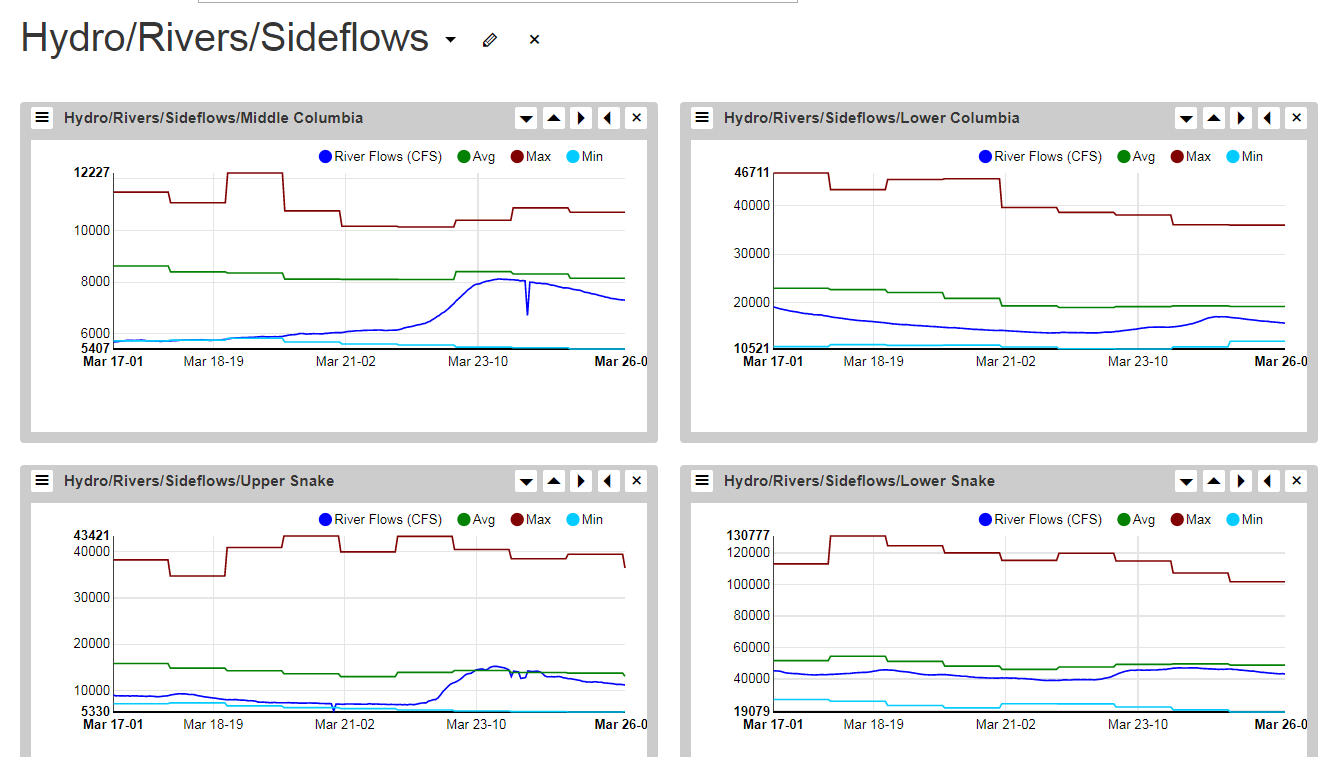 Keep an eye on this dashboard, it is the Ansergy Sideflow Index and measures unregulated streams flowing into the mainstems. The indexes have crept up, but are all below normal. Keep in mind, this is a monster snow year, so at some point, these indexes will approach, or set, 20-year highs. For now, they just barely register. 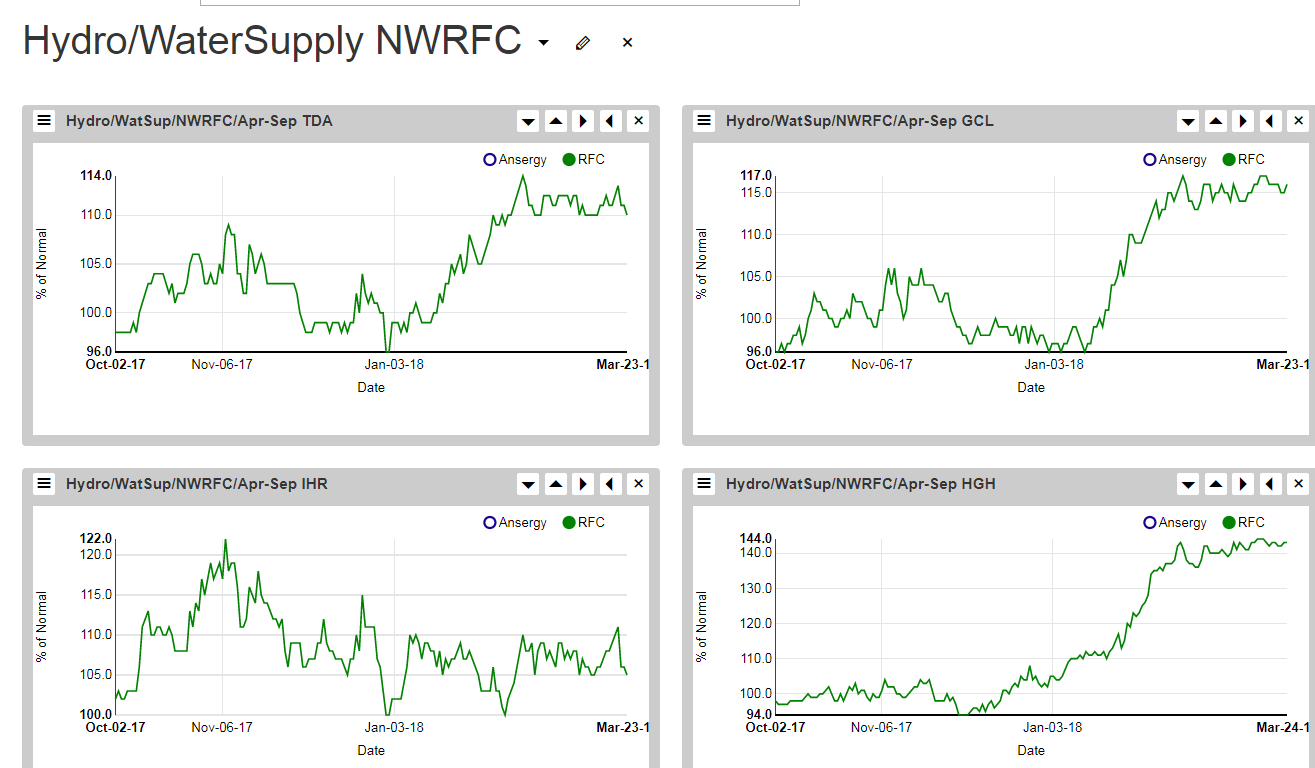 Just like the SWE anomalies, the NWRFC’s water supply forecasts are sideways, but it is the values that are most telling. This is a big water year, it just hasn’t started yet, and we see no signs of the melt starting for the next ten days. 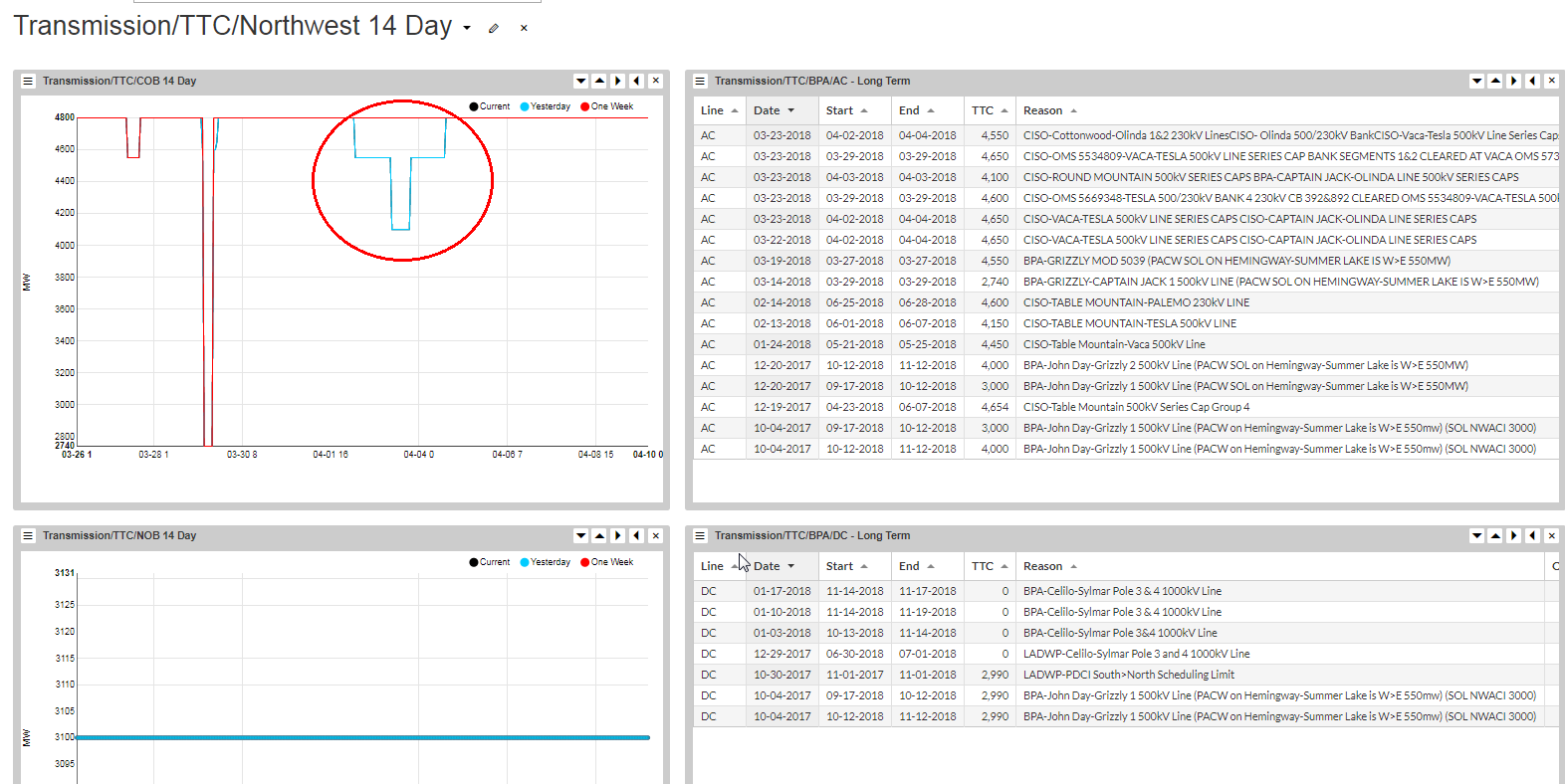 A new AC outage showed up, small and of short duration. No changes to the DC. 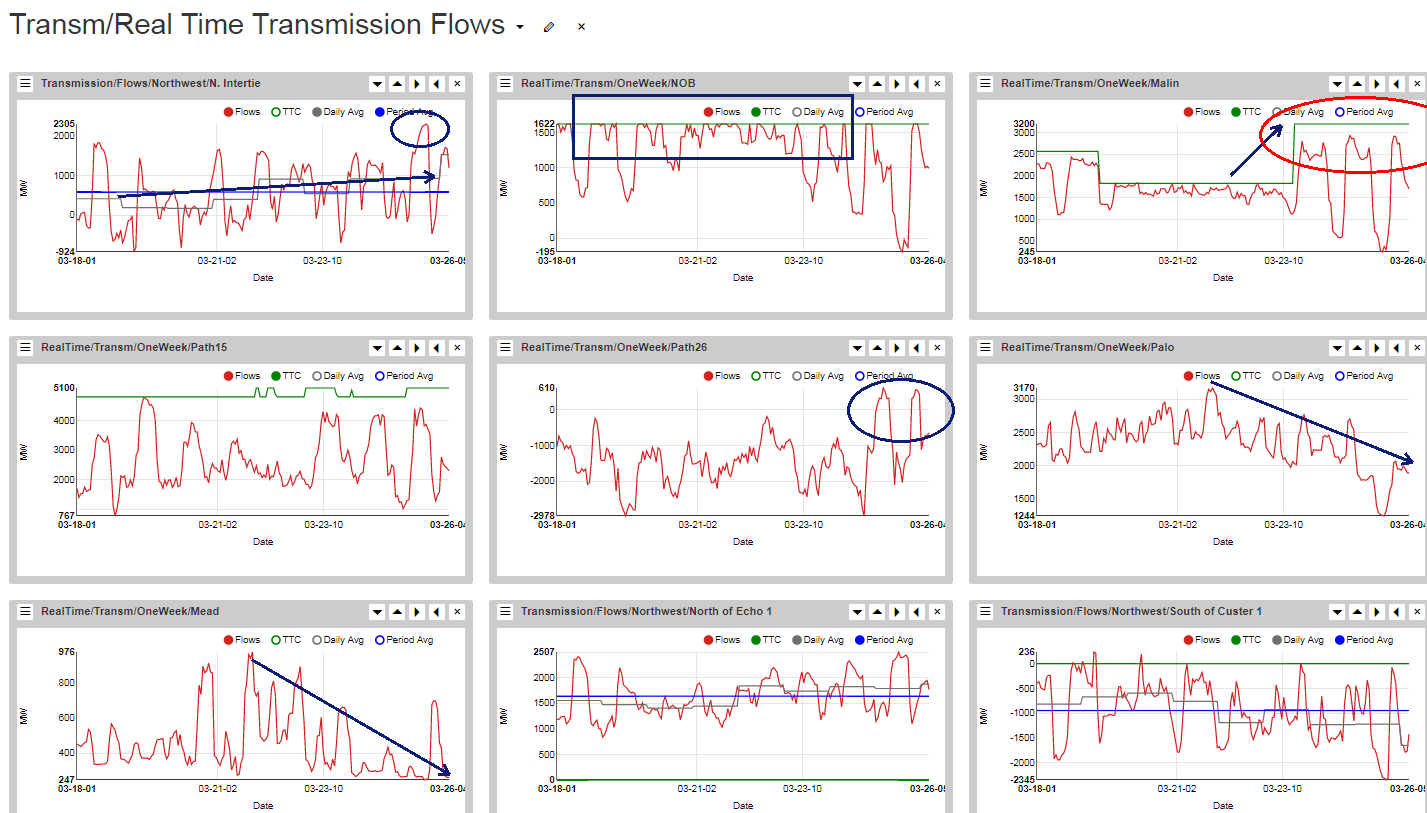 BC was a big buyer over the weekend, importing 2300 MWh/hour for a few hours; net energy flowed into Canada the last couple of days. The DC had a string of hours where it hit TTC almost every hour, but then this weekend no one wanted its energy – probably during those negative DAs. The AC returned to full capacity but didn’t fill the line. Somebody’s real-time desk was sleeping. Path 26 saw exports northbound for a few hours yesterday, again endemic of weakness and you can blame some of that on this new hydro energy, some on robust renewables, and the rest on miserable demand. Palo passed on puking its energy, so did Mead.

Fundies are bullish outside of the ISO and bearish inside. Next post, we’ll look at some of those markets.