A busy week, this one is, with the Flood Control release and WSPP. Fortunately, the weather is just sideways so doubt we see anything too crazy, though there are hints of a return to heat in the southwest, but those surprisingly cold, and late, blasts of arctic air have migrated east.

Socal Citygate remains the premium spot hub in the west; even Socal Border is trading premium to PG&E Citygate. Though either’s status as premium appears short-lived when looking at the prompt contracts: 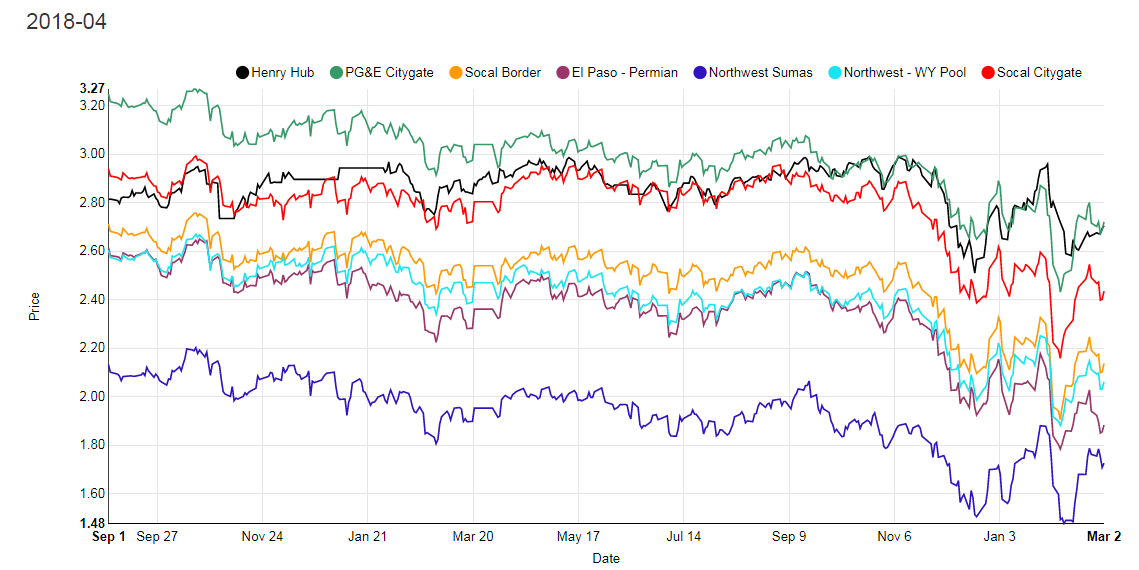 All the hubs are beneath Henry, and all are weak. 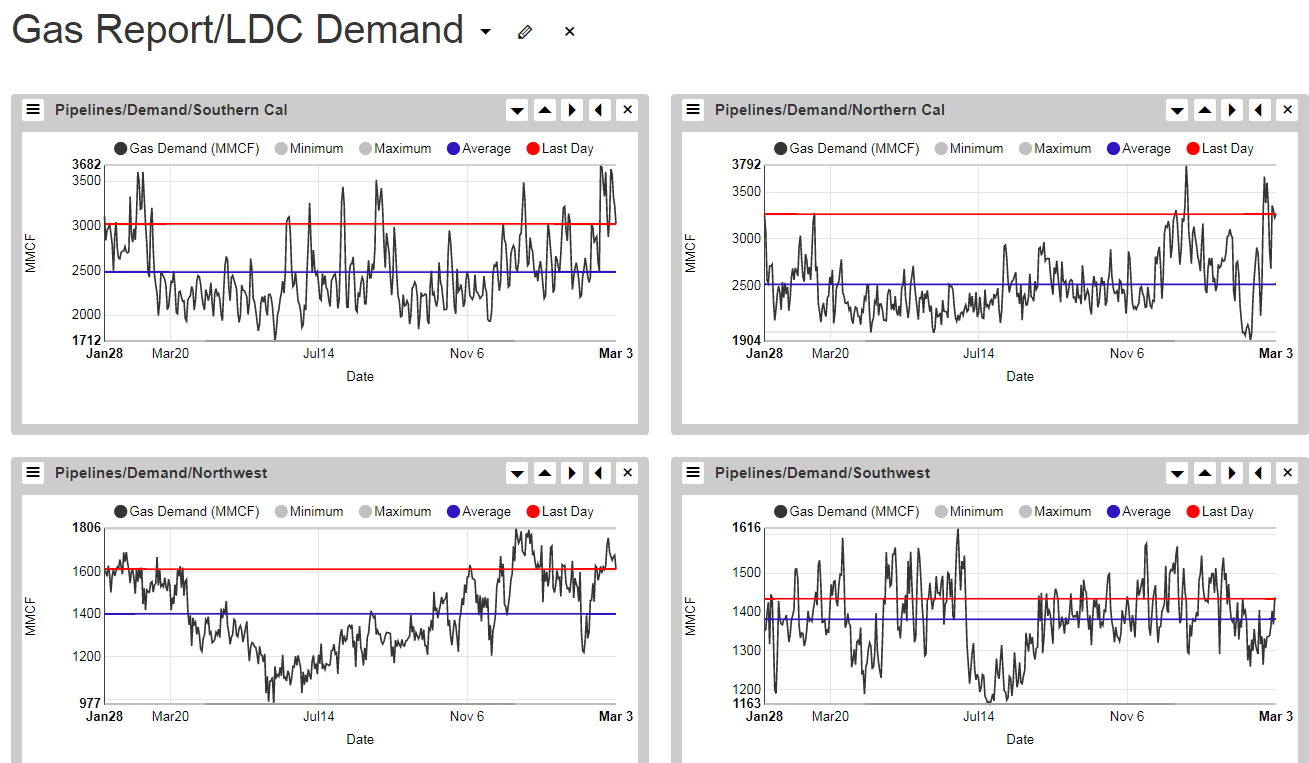 Demand remains relatively strong, but with warming weather, that too shall pass. 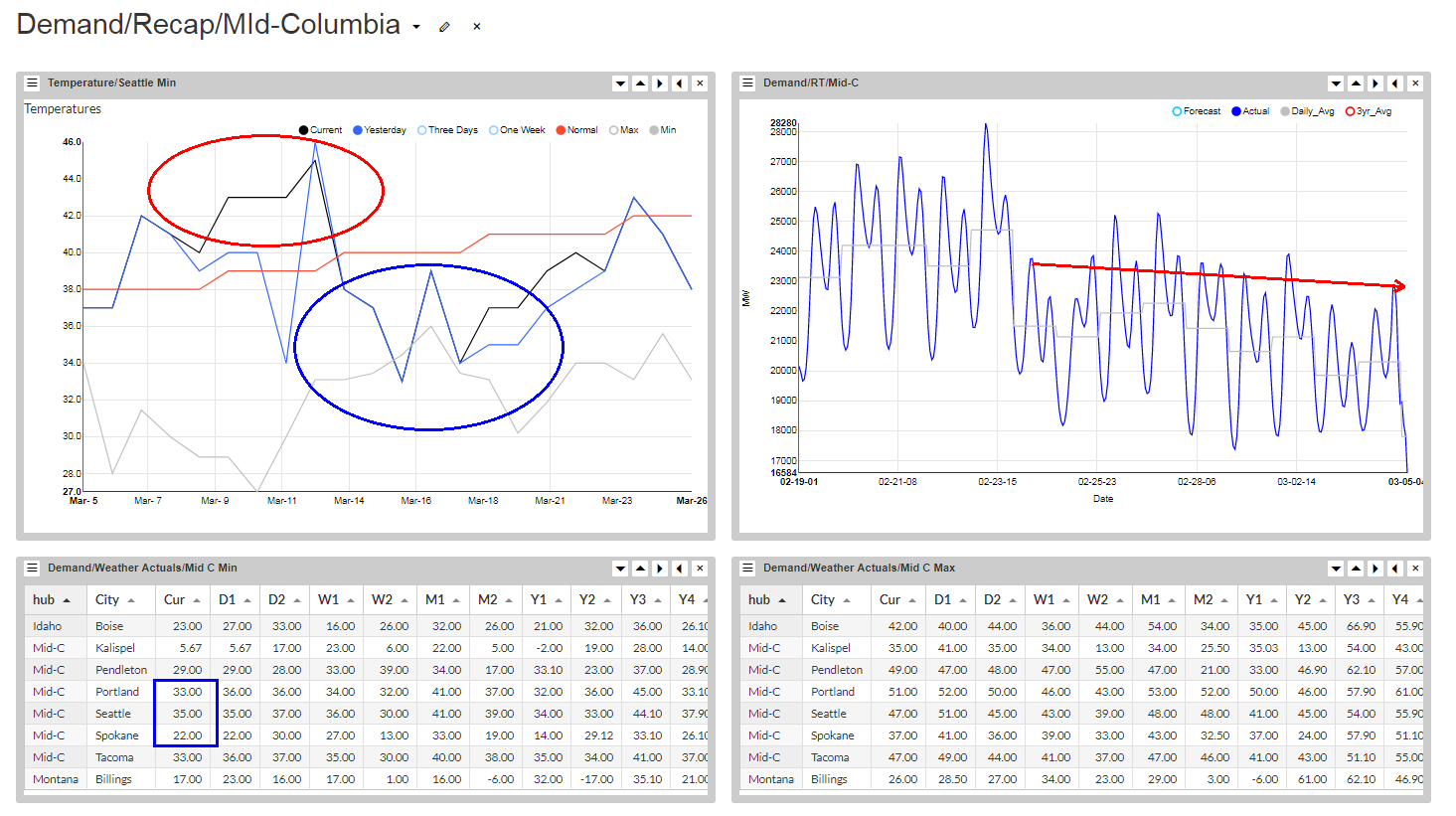 The Northwest sees a return, this week, to mild temperatures, even warmer than this weekend, and will realize even lower loads as a consequence.  Beyond, there are hints of more cold weather which will lock the snow in place and keep water tight. 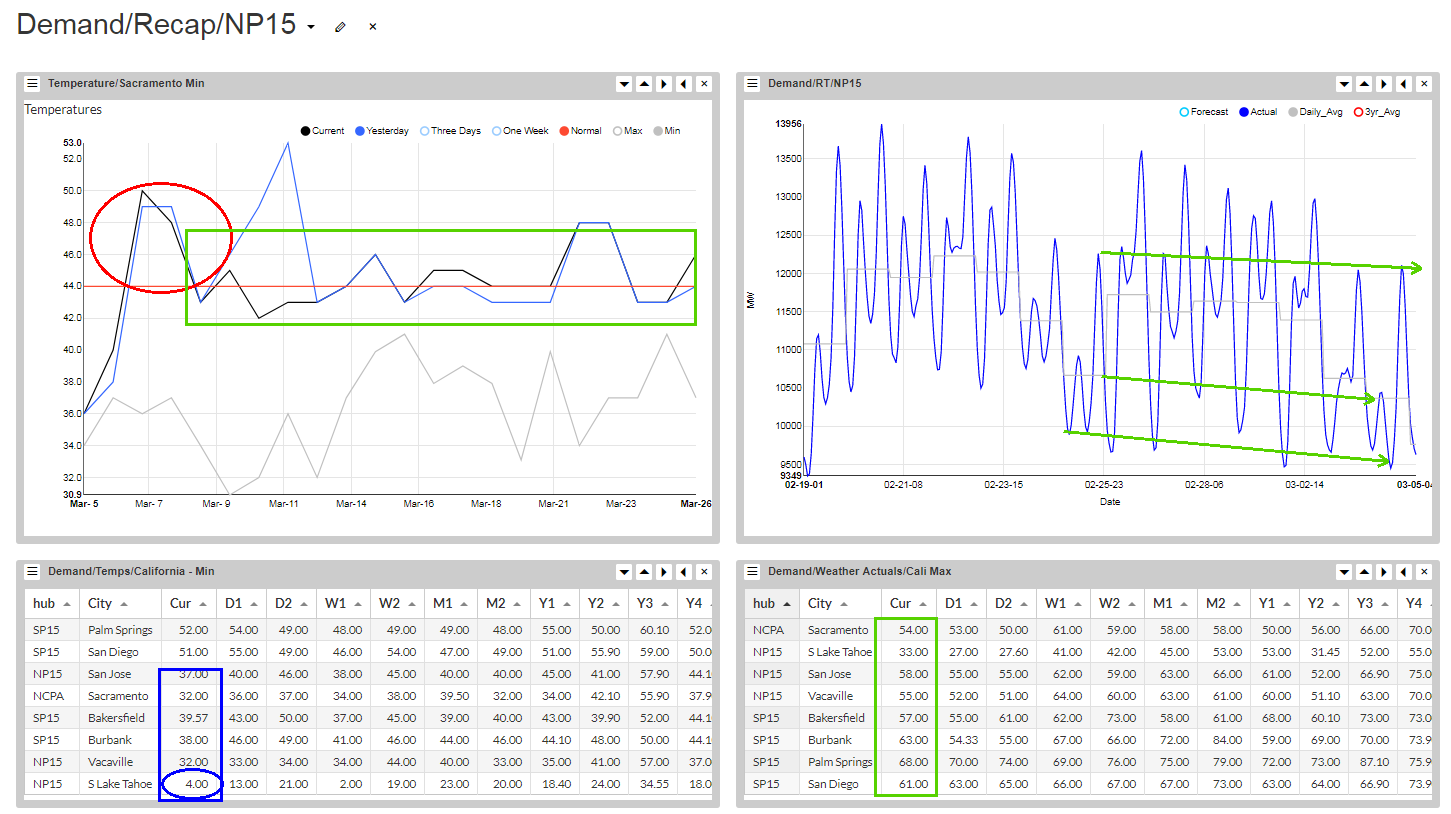 And SP’s gas loads are poised to fall off a cliff as temperatures are 10-20 degrees warmer than last week. Power demand didn’t change much because it never rallied off of those lows, though gas demand did and now the latter is set to collapse. This will probably be the last time we use Min Temperatures for SP. 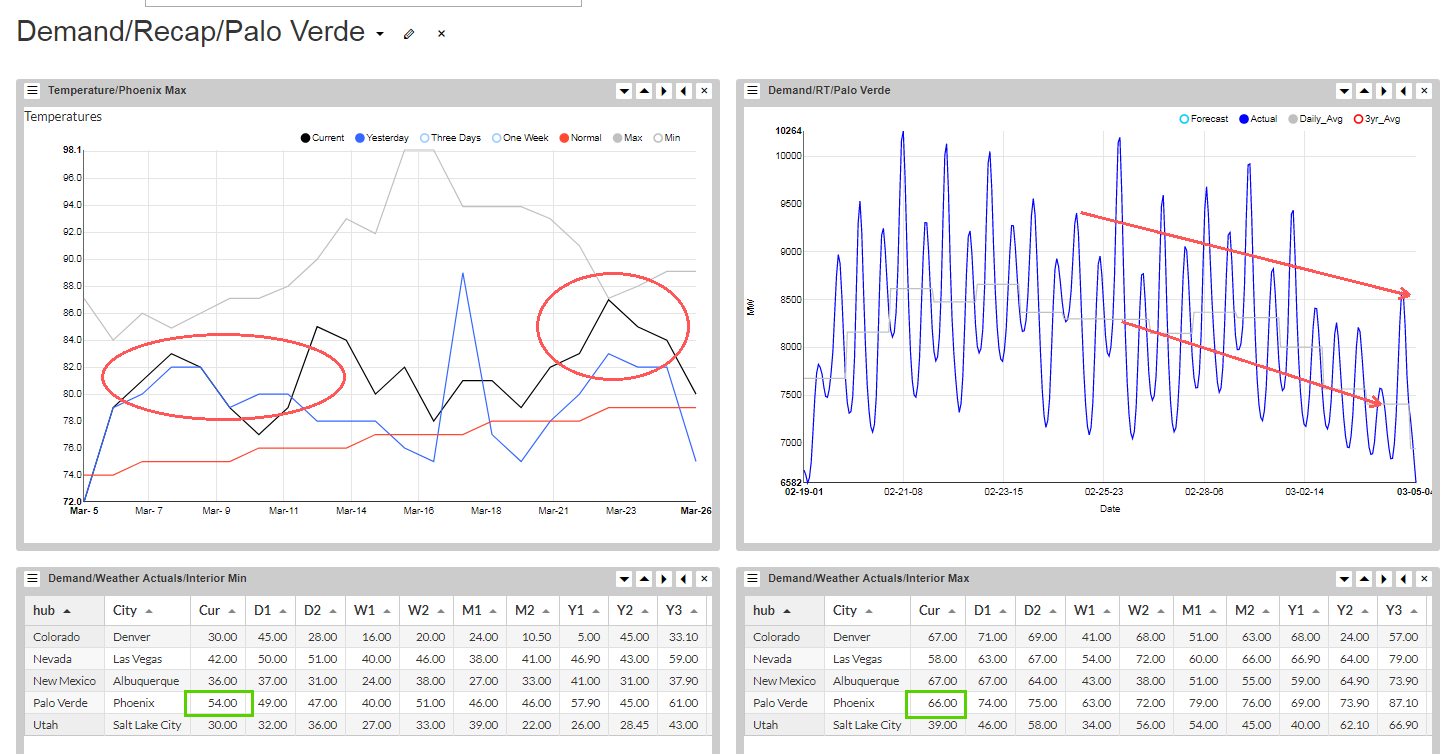 Loads are off sharply at Palo but looking out there should be some AC load over the next couple of weeks as temperatures creep back into the 80s; nothing like summer, but that’s coming. 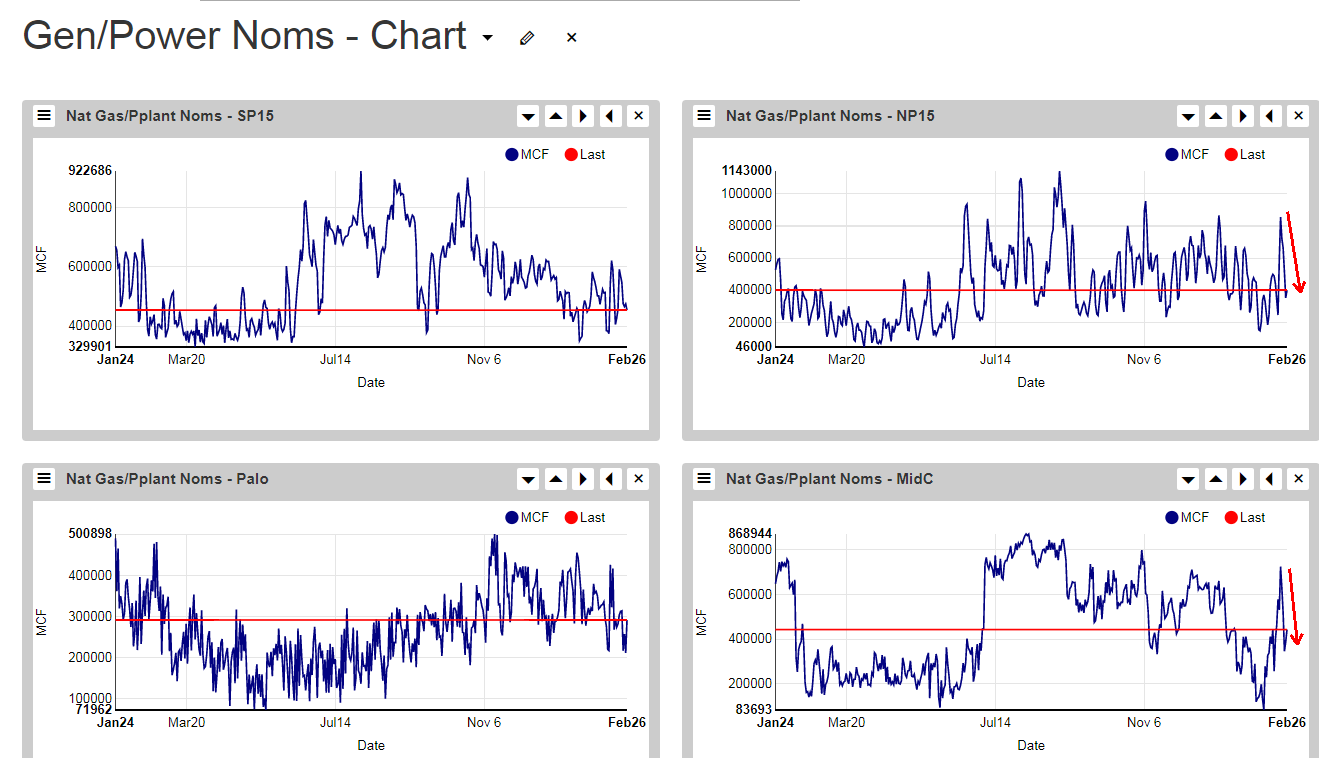 As expected, after watching power demand fall in all the traded hubs, gas nominations are down across the WECC, indicative of a weak market.

The Day Ahead shows just how weak, the DA max is off at SP, the other points are sideways and there is very little congestion between COB, NP, and SP.

The Northwest will be relatively dry over the next ten days, but the damage has been done, most basin snow levels are well above average. 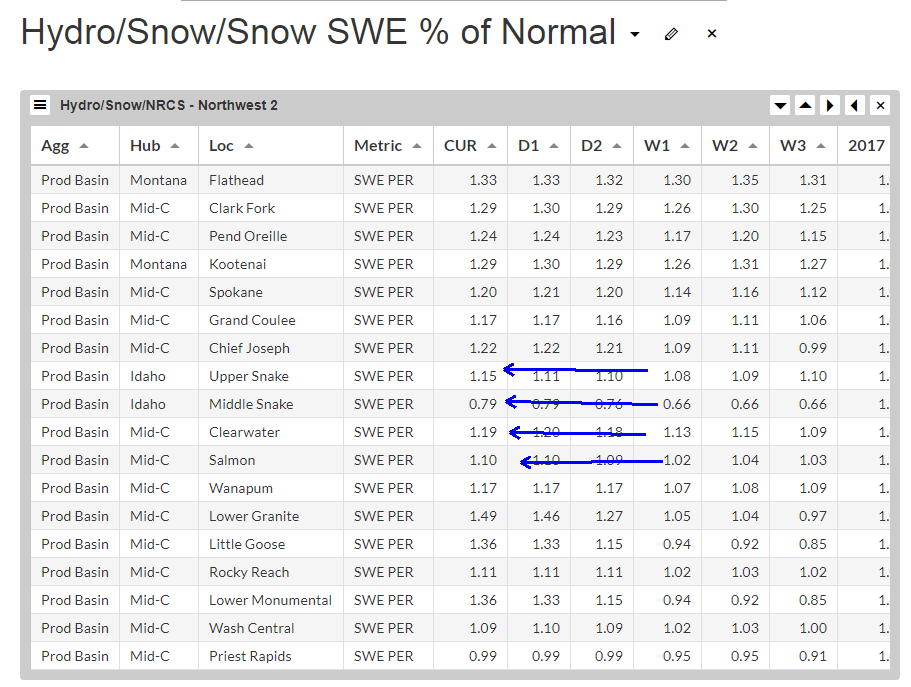 That storm that slammed California also brought snow to the Snake River Basin, most stations there realized a 10% rally, week on week. The rest of the stations, those above Coulee, are mostly sideways. 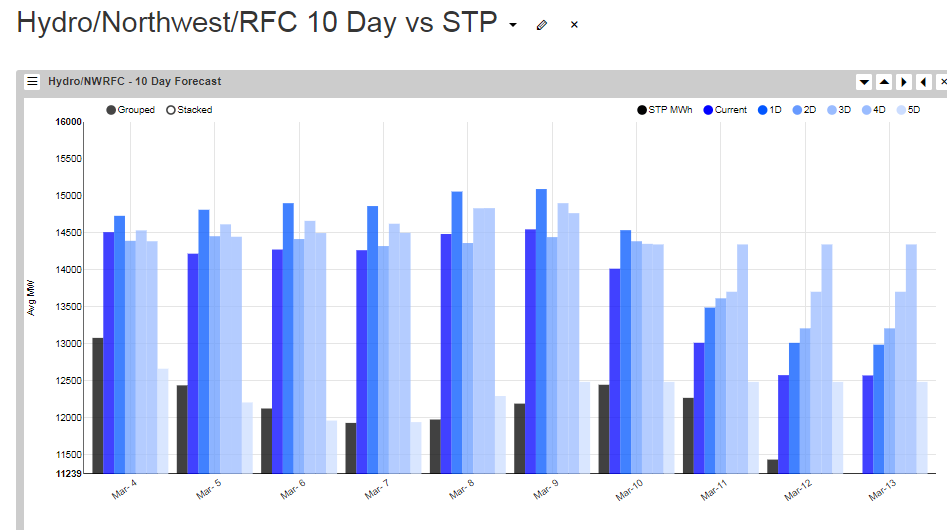 The Feds jacked their 10-day forecasts, relative to last week’s STP, which suggests today’s STP forecast, at least for BOM, is set for a strong rally, like 1000-2000 MWs. Most likely, that will also spill into April as we get a deeper draft from this week’s Flood Control, probably into the 1220’s.

Draft becomes ever more moot, too, as Coulee races to its March drum gate target of 1255′; BPA only needs to pull four more feet to get there. All of this Feb, and now March, drafts just make the BOM and Prompt that much more bullish. That said, some 70s in Kalispell will change our tune, but we don’t see those.

Inflows into Lake Roosevelt are down, but that is expected as the first two weeks of March have little planned draft; plus it is still cold, and natural river flows are weak.

The DC was down for a few hours over the weekend; we didn’t see that in any of BPA’s plans. The AC wasn’t down, in fact, it wasn’t even full over the weekend, we had seen many hours hitting TTC, that wasn’t the case over the last 48 hours. Flows out of ZP are mostly Northbound, indicative of how weak SP is.

Nothing startling, California grows weaker while the Northwest remains tight off of cool weather which is keeping the snow from melting. We expect a more bearish draft later in the week, but even that has been tempered by the 20′ feet pulled out of Coulee in February.