Our takeaway from the fundy review was a modestly weak week followed by strengthening in both the north and the south. The former off of cooler and drier weather and the latter off of increasing heat. Let’s see how the market views things. 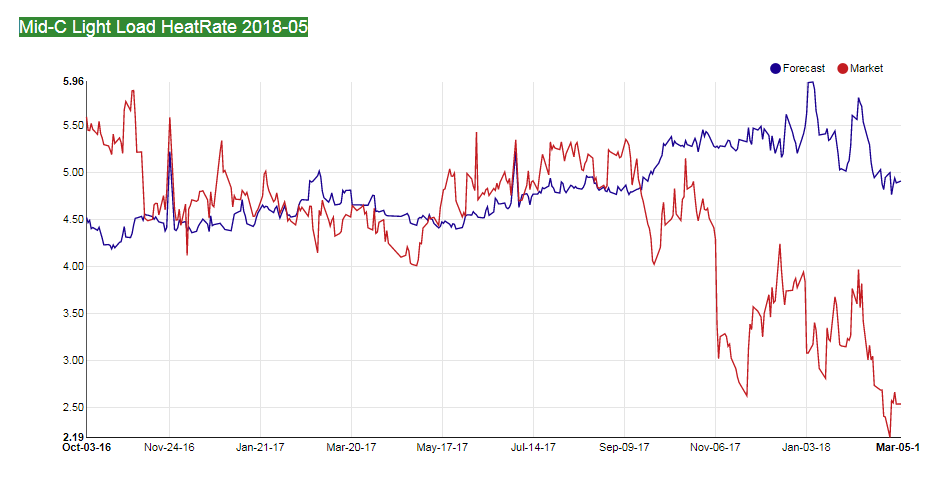 You can own the May LL for $4.35, which is pretty cheap if the month is cold. May is refill and spill, if its warm, $4.00 might be rich, if it’s cold, it’s the buy of the year. Of course, we know nothing about May temperatures, but we do know that the last month has been cold in the Northwest. We also know that next week reverts to cooler weather. Trend = Friend? Don’t know, but we’d own this. 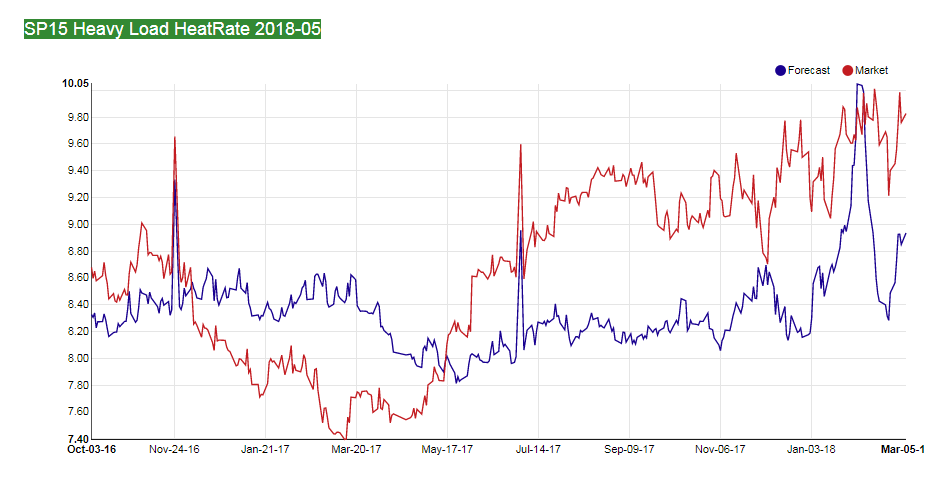 The May SP is back to contract high, but we still won’t sell it; instead, we’d like to see the market move past this resistance before we took on that risk. Remember, SP hasn’t had any hot days for a while, the hub’s loads didn’t move during that cold snap. I’d like to see a cash day where LA is in the 90s and see what happens to these SP bullets, maybe then sell. 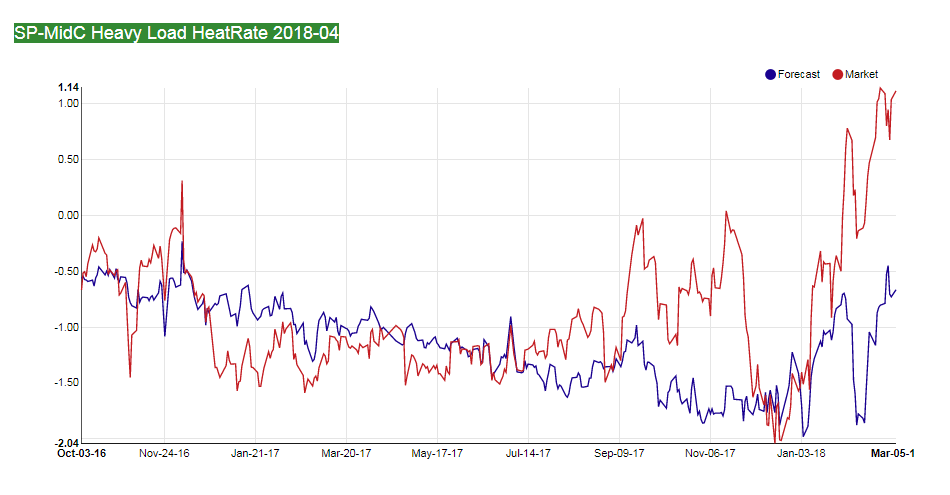 This is high, but maybe reasonably priced. California remains a very dry place, despite the big storm that passed through the state. That storm did help, though:

From the Mid-C’s perspective, we see a more significant draft, probably around 1225′. But we also see some of that April draft taking place in March, and wouldn’t be surprised to see Coulee end up the month around 1245, leaving just 20′ to pull in April – the easiest 20′ in the pond. If temps stay cold the freshet won’t kick off, and the draft is all the easier, plus we start to spill in April.

Ok, we talked ourselves into selling a piece of this.

Well, this is cheap, the Palo June-May roll for LL. Why? We can offer no reason for this 3000 btu move and would own it. 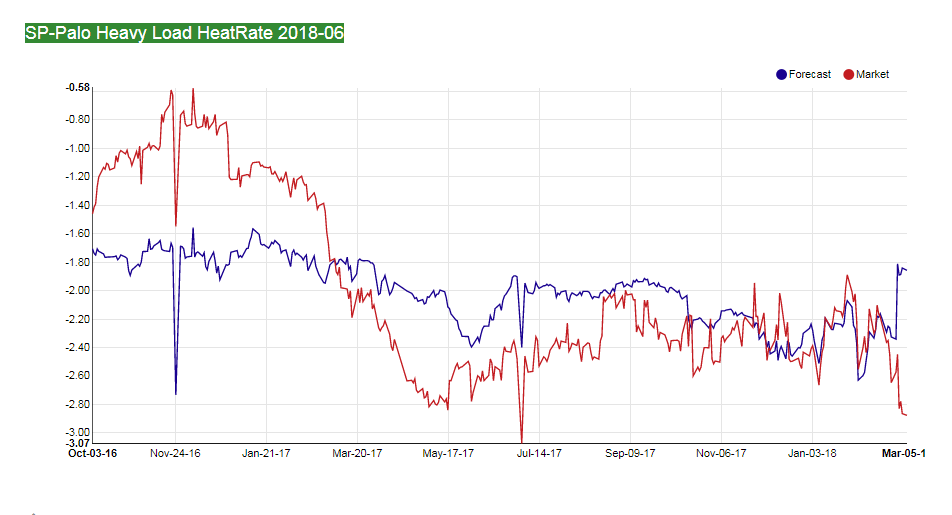 The SP-PV spread for June has gotten cheap and is now a contract low. We know last year Phoenix had some freakish hot June days, like a string of 120s, but you think that three std dev anomaly will repeat itself? We don’t, and we’d buy this spread. 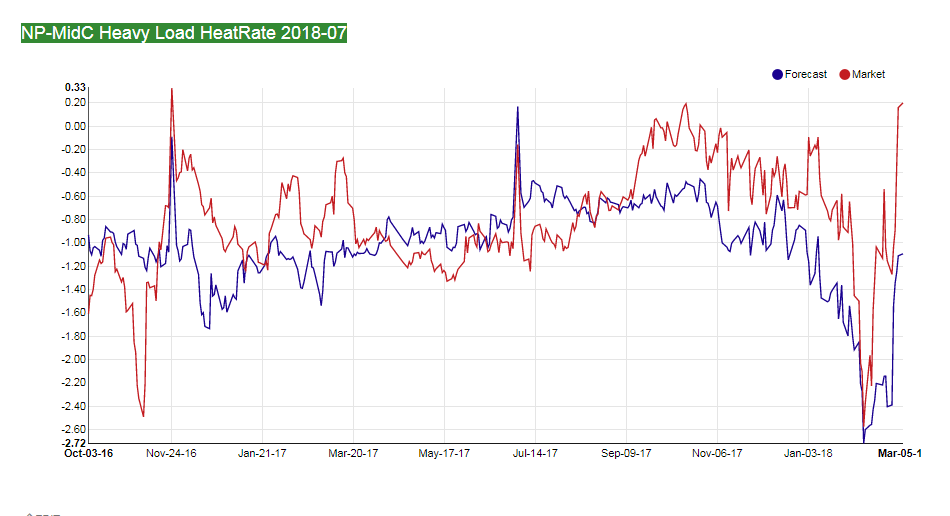 Back to a contract high, after being too cheap to meter. The funny thing is its probably reasonably priced – pass. We fear this significant snow above Coulee and the current cold trend – all of which means an extended runoff deep into July, maybe even August? 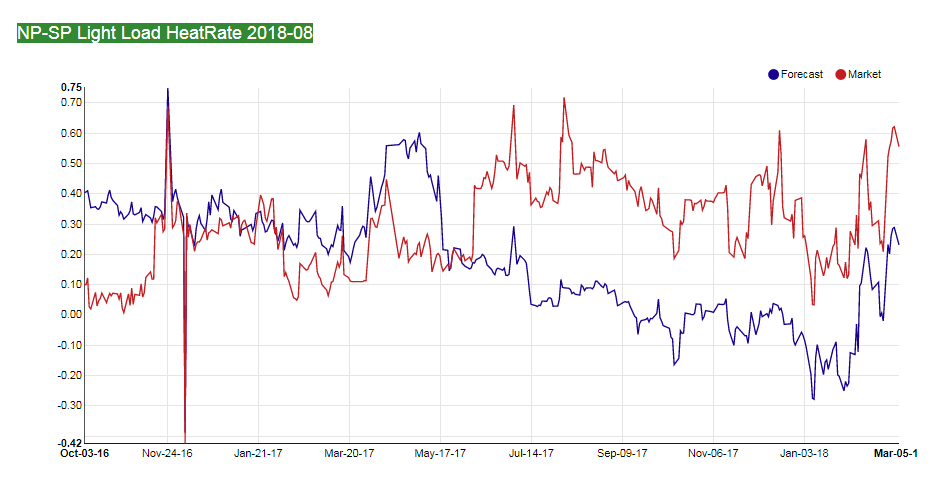 Approaching its contract high, but probably more fairly priced today than last week, despite the big dump of late. Besides, this is August and California water is a moot issue in that month for this type of water year. 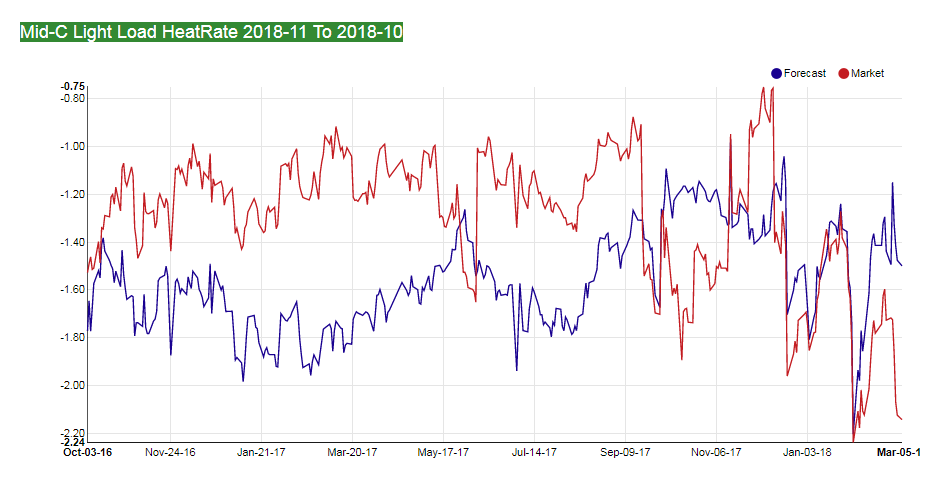 This is looking at the end of our “front” horizon; the Nov-Oct LL roll at MidC. This is choppy, now its cheap for no reason. What does anyone know about either Oct or Nov in March? We know the DC is down for an equal number of days in both months, that’s about it. Fade anomalous pricing; this is an anomaly …buy. 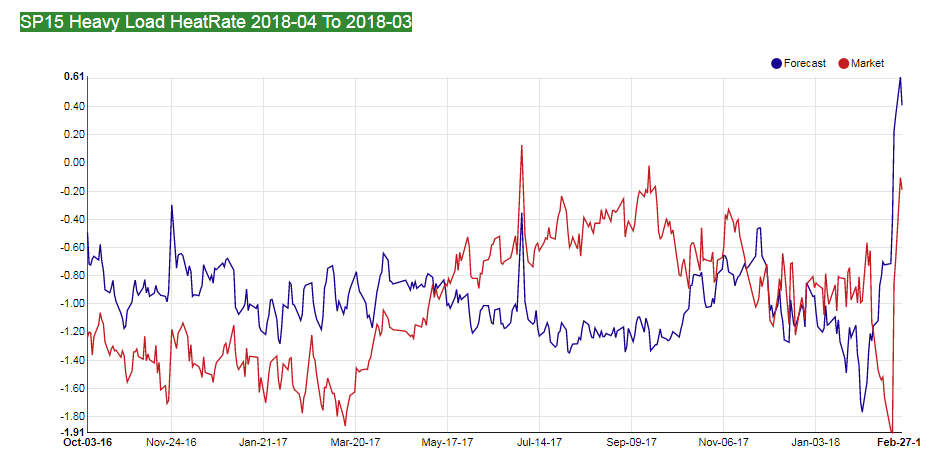 These term gas price volatilities are wreaking havoc on the heat rates, but now this roll is back to value; it was dirt cheap last week. 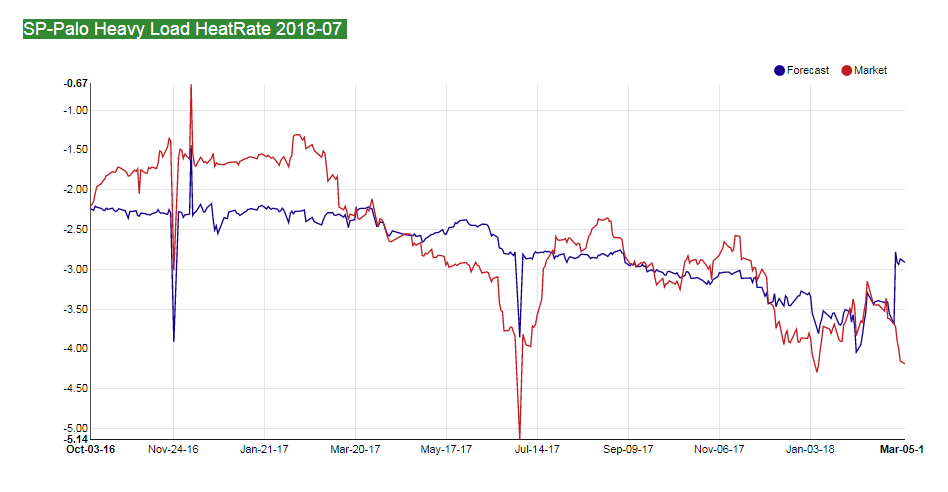 This is cheap, too, the SP-PV July. Don’t forget how little water California will have in July. 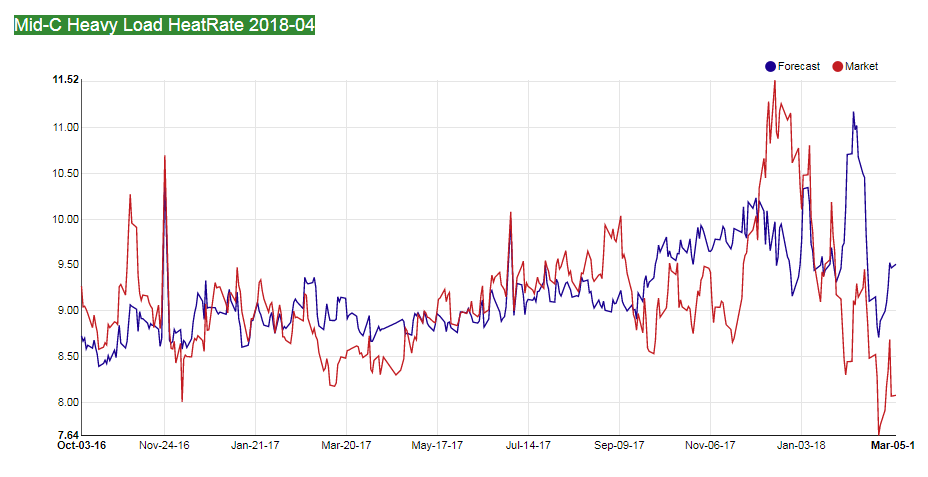 April has pulled back from its fake rally and is cheap. We’ve already talked about the bullish case – cold weather and continued dry. The bearish case is just the opposite, but we don’t see that in today’s forecasts. We don’t see MidC trading cheap cash anytime in the next two weeks; we’d be more inclined to own than short. 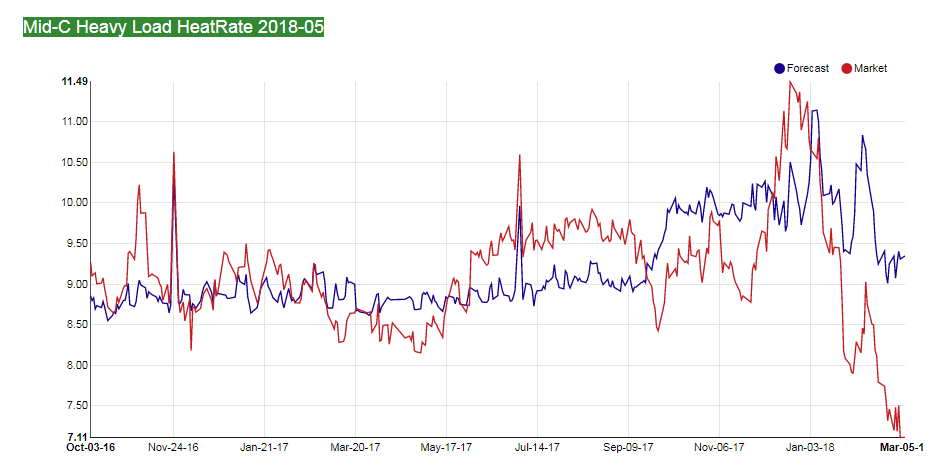 We’d own this too; last year BPA kept gas on the margin in March despite 550 kcfs flowing past their offices. If the weather stays normal, doesn’t even need cold, this is a winner. 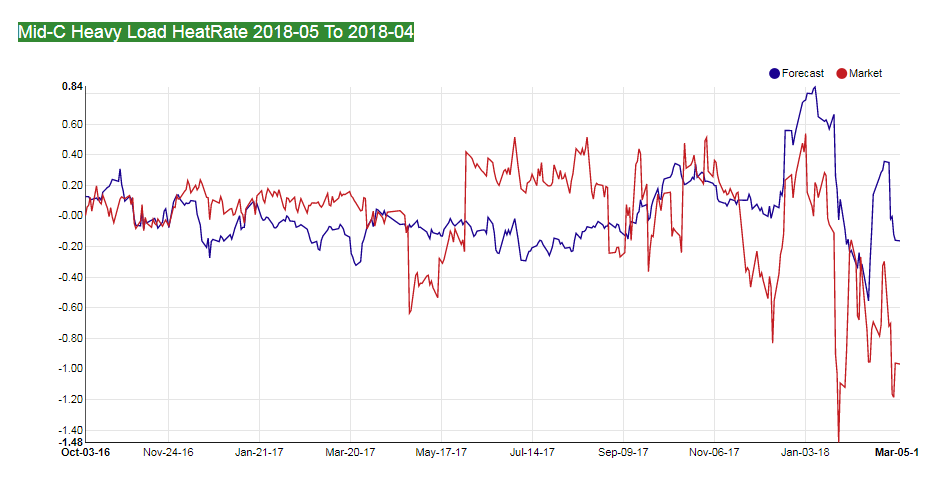 Which is better, May or April, to own? The chart suggests the May is cheaper, relatively speaking, and we’d concur, though we’re long both so we’ll ignore. 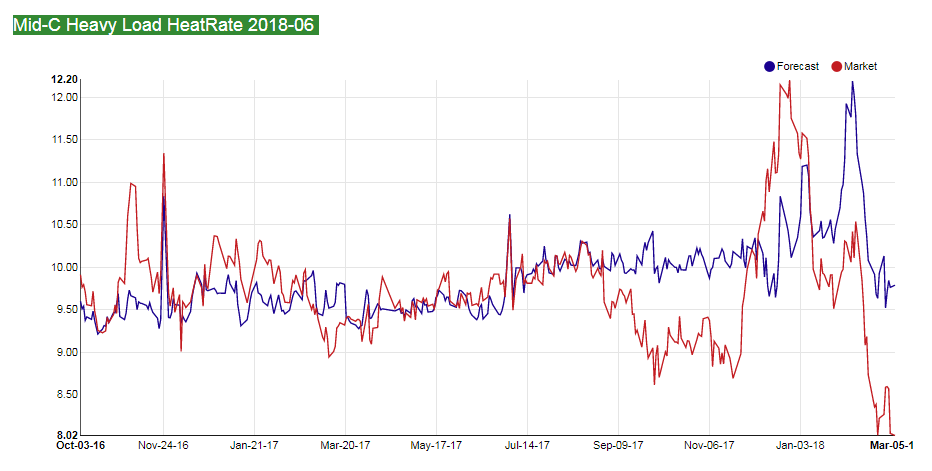 June is cheapish, too, but it is a big water year, and cold weather (in Mar-May) has an opposite effect on June – makes the month more bearish as all of that snow has to melt at some point. Runoff deferrals are just pushed into June and July. 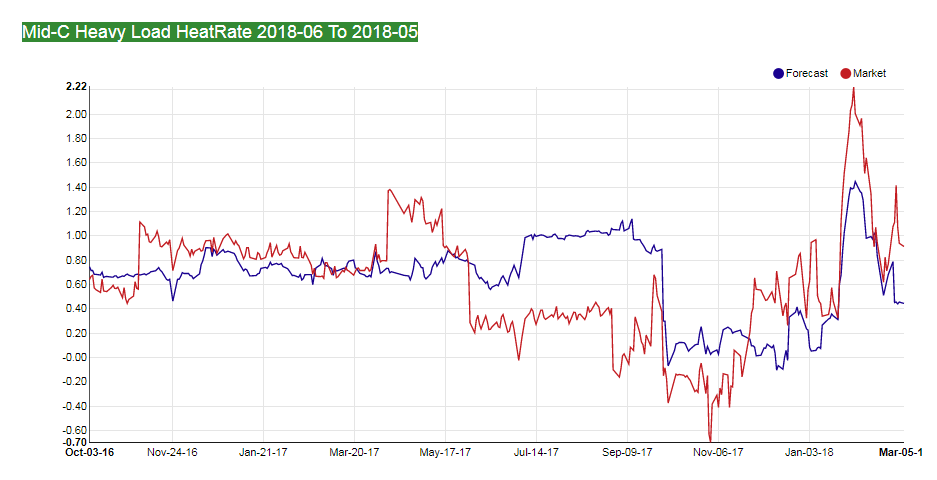 The June-May roll is reasonably priced; if we had to pick a side, we’d sell it. 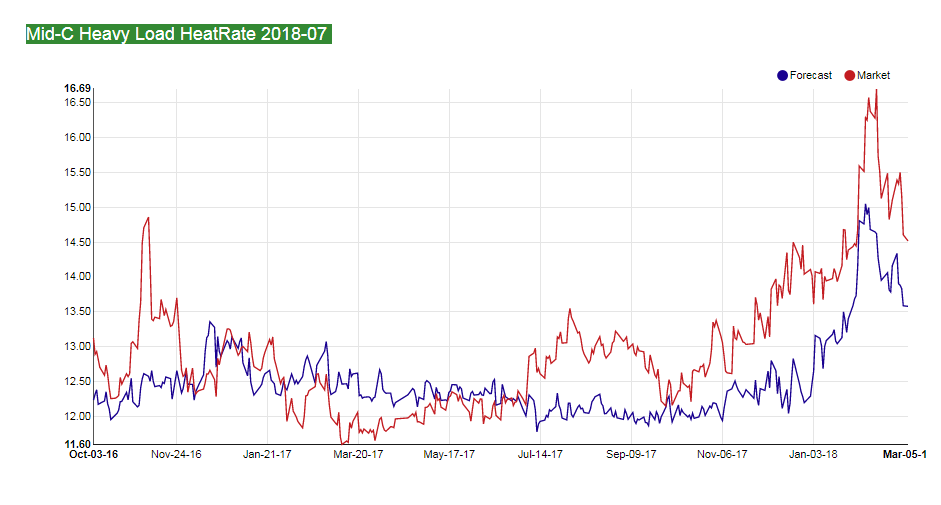 July has been pounded, and it should be. This will be one of the longer runoffs in recent memory, and you can expect the Pend Oreille to be flowing 60-100kcfs for much of the month. If anything, July is still rich. 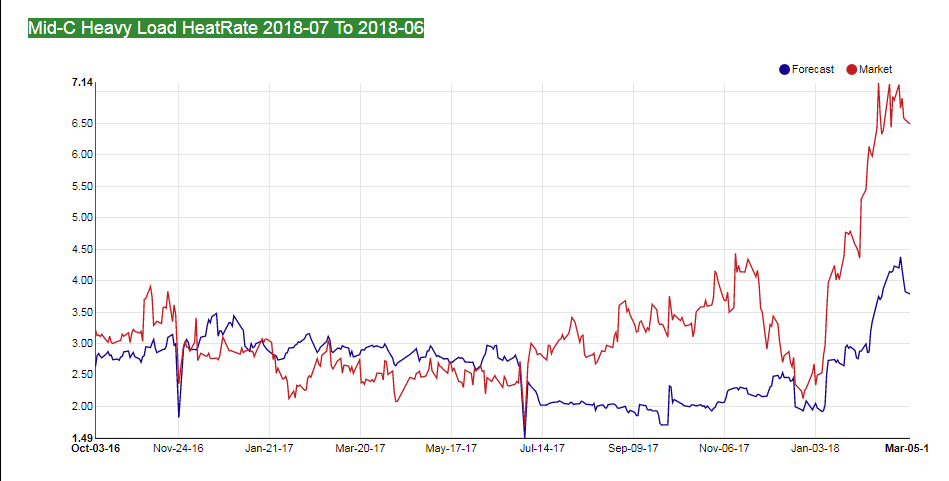 We’d sell the roll; every cold day means more July water, more inflows into Coulee and there won’t be any storage; all of it must pass through the turbines. 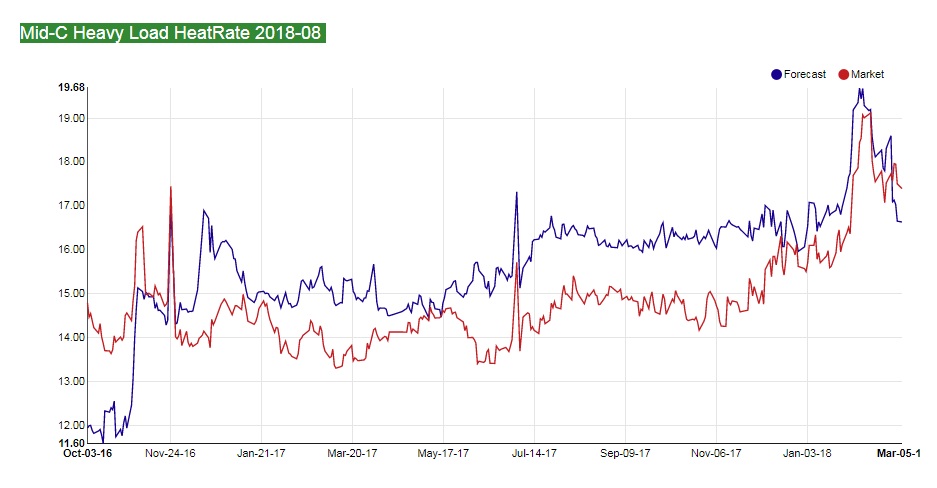 Aven August has pulled back, and it should. If July is weak, why would August stay strong? Now its more fairly priced than not, but still has more room to slide. 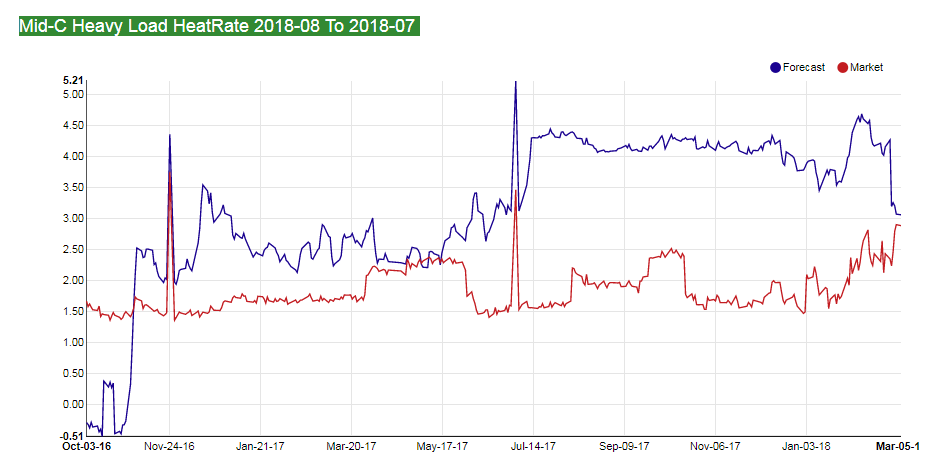 The roll is creeping up, and it should. We’d still keep buying it. 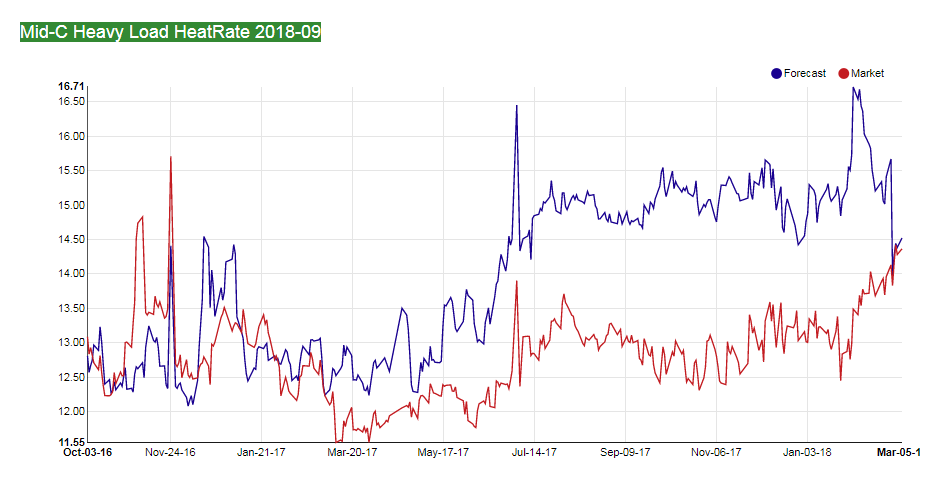 Poor man’s summer, Sep is, and the market is liking it; we’d fade the rally and sell it. If June, July, and perhaps August are bearish, do you think Sep will slip by unscathed? 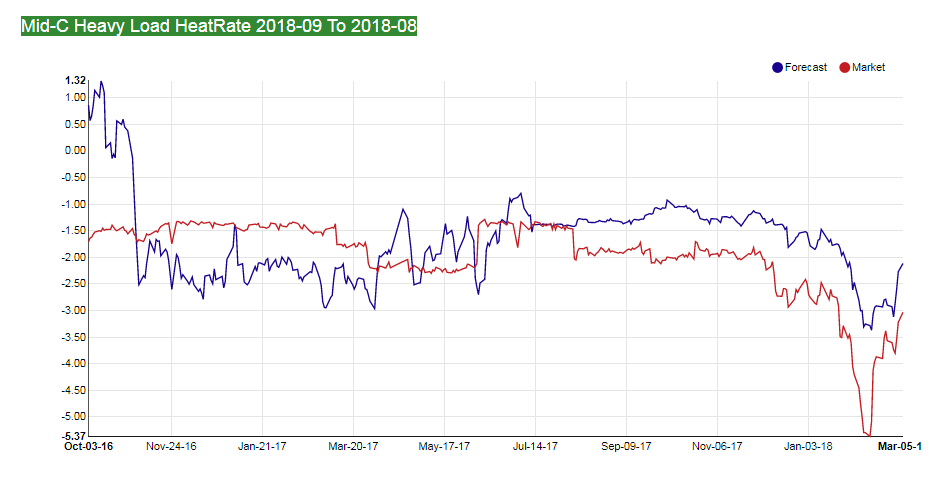 The roll was a free look a few weeks back, now its fairly priced.