Aside from the USA Federal Government possibly shutting down over the weekend, it’s all good. Does that mean BPA operators work without pay? Or perhaps they just walk off the job and let the projects do what they may? Strange times, sad times, perhaps even scary times. Washing away some of that fear and loathing are some rather staid fundamentals; looking hard through the reports to find something that made me feel irrationally exuberant and came away with nothing, except maybe the Needles outage.

SCG posted the outage on its site on Tuesday, no gas is flowing, but even that bullish news is offset by the ramp-up in flows on all the other pipes. We also noted a slight uptick in SCG demand, emphasis upon the word “slight.”

Gas demand in Northern California, PG&E service territory, is weak; perhaps the weather outlook will change that reality? Or not. 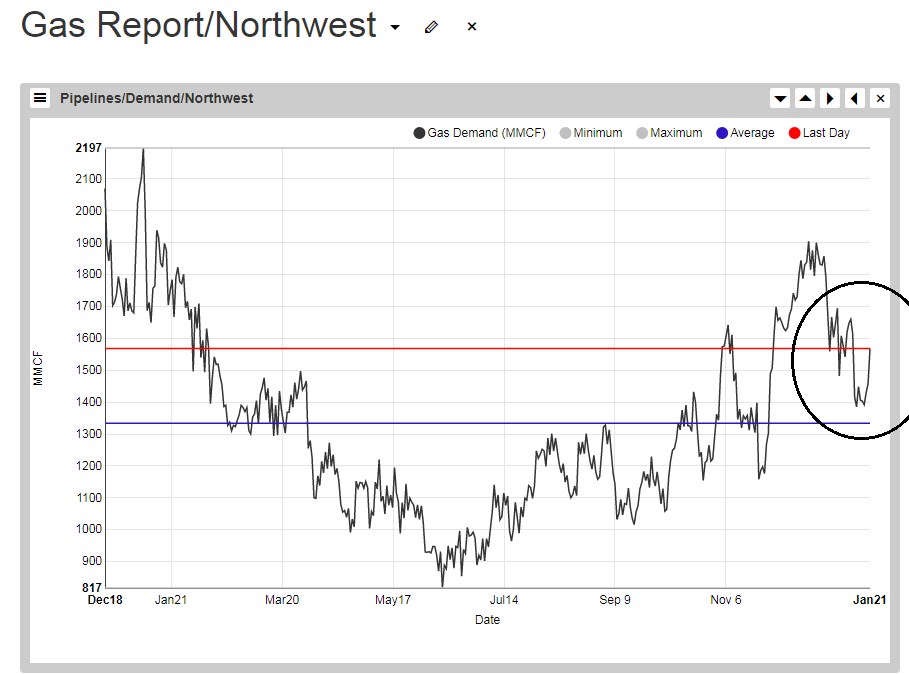 Northwest gas demand is extremely weak; we are surprised Sumas isn’t lower; contrast last week with last year, and you get the picture. The great Northwest realizes an extremely weak winter; there never was that blast of cold that drives so much hype.

Spot gas prices are very tight across all the west hubs; contrast today with a month ago. We’d be inclined to sell that relative tight basis; rarely has gas stayed so tight everywhere. Also take note of the rally at Socal, both border, and Citygate; SCG is back to the premium hub.

In these periods where not much is happening you need to stay focused, stay alert, keep your eye on the eight ball because something might happen. We do all of the above by making new dashboards, examples of our latest Power Demand dashboards to follow. 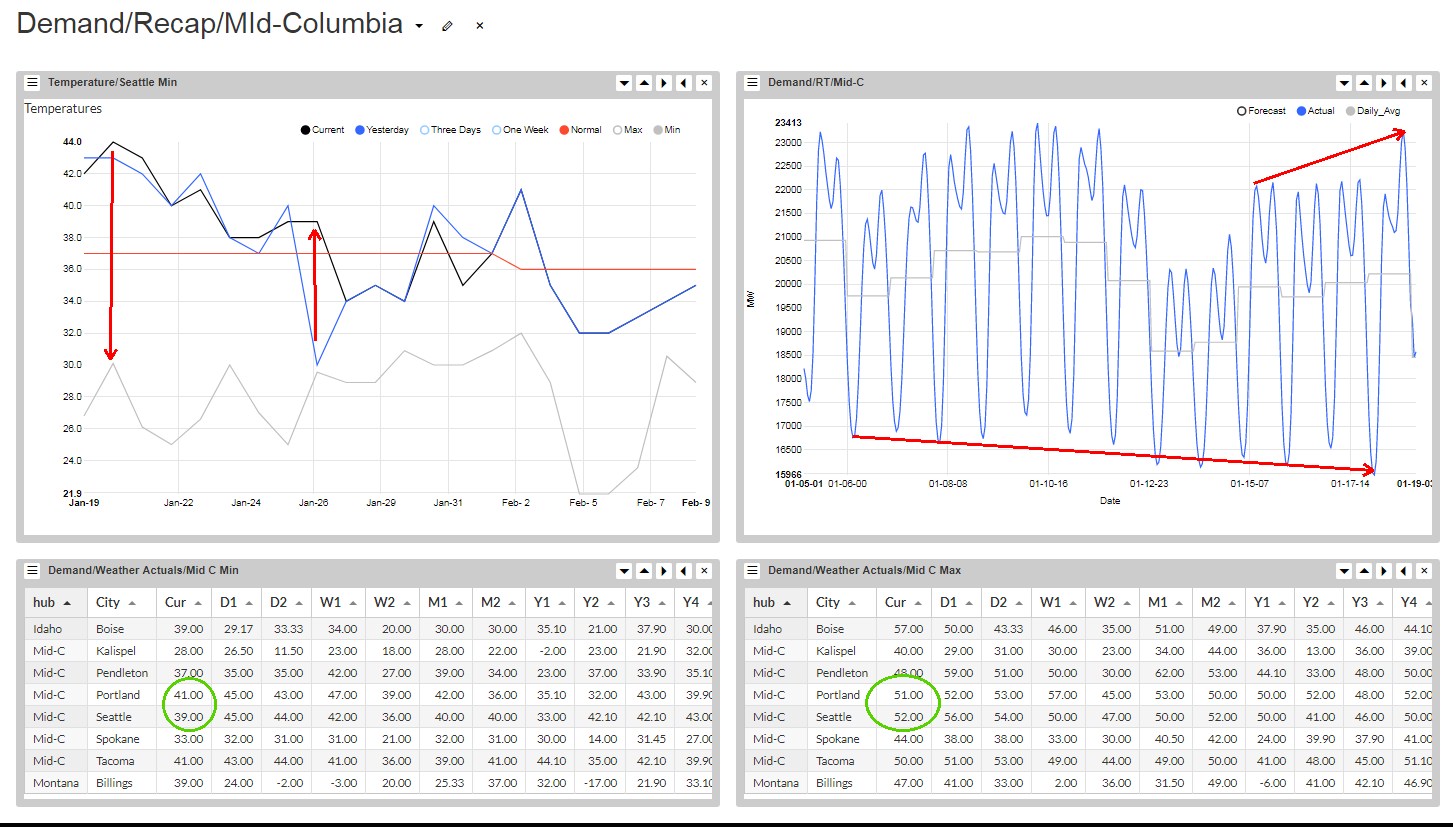 In this new look, we’re combing the Temperature Forecast, Realized Hourly Loads, and Realized Actual Temperatures all into one easy, and fun, to read object. By the way, Ansergy has completely retooled its actual load reports. This was driven by some horrible data the Balancing Authorities were submitting to the EIA, perhaps intentionally, as these utes hate giving away their proprietary information. We love that they do and hope the EIA forces them to start posting Actual Generation by Fuel Type – they say that is coming, we hope it does.

Our Mid-C demand takeaways are thus: 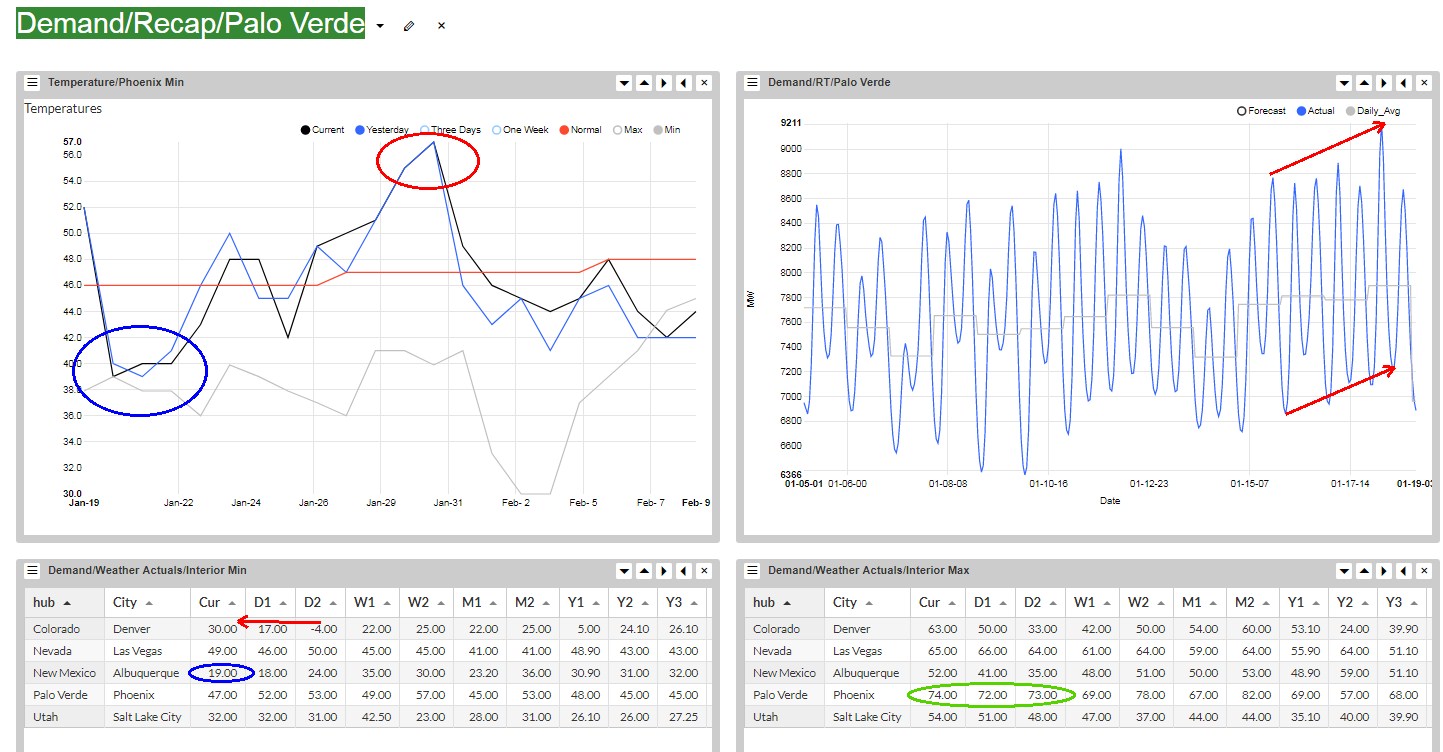 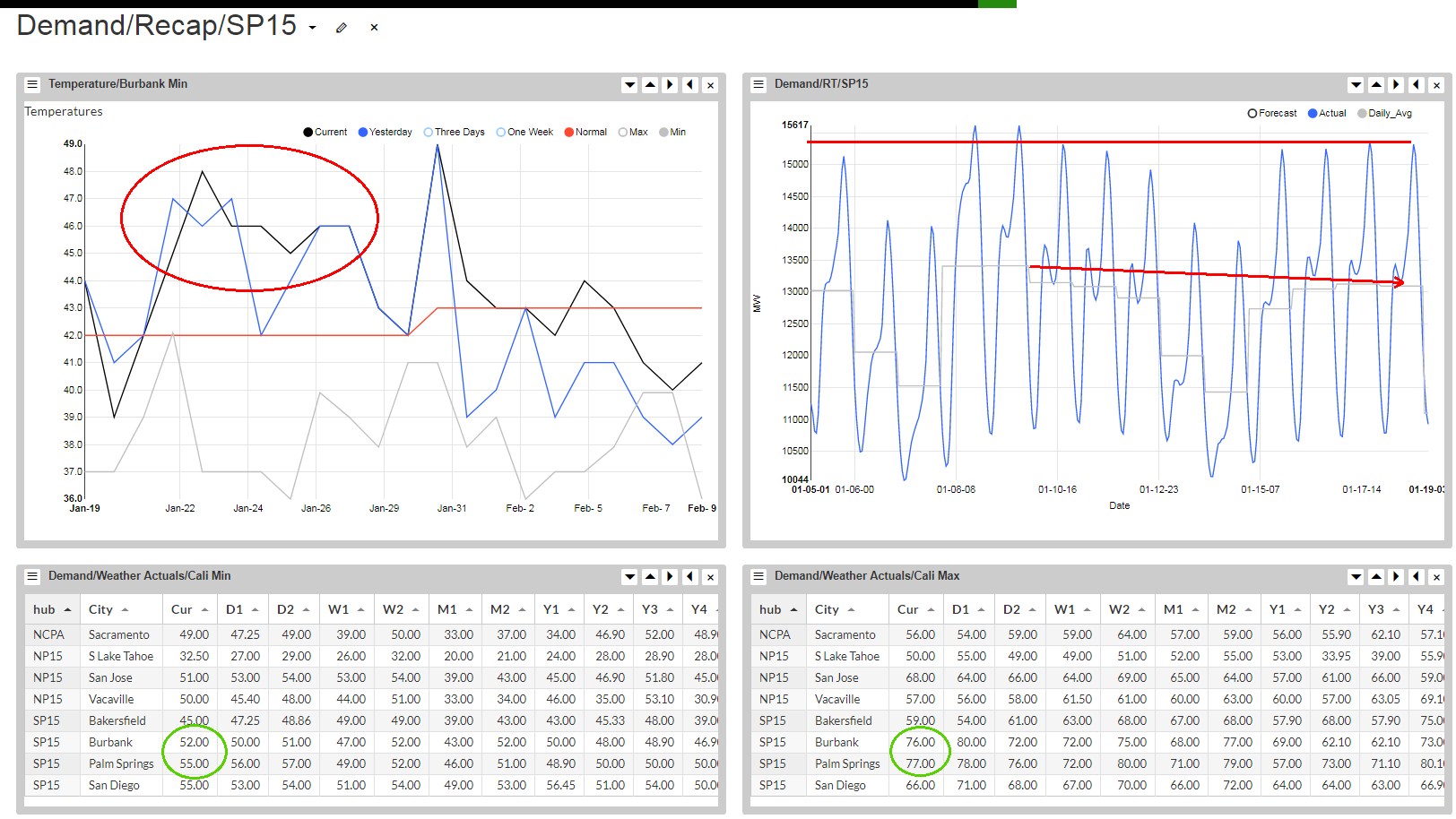 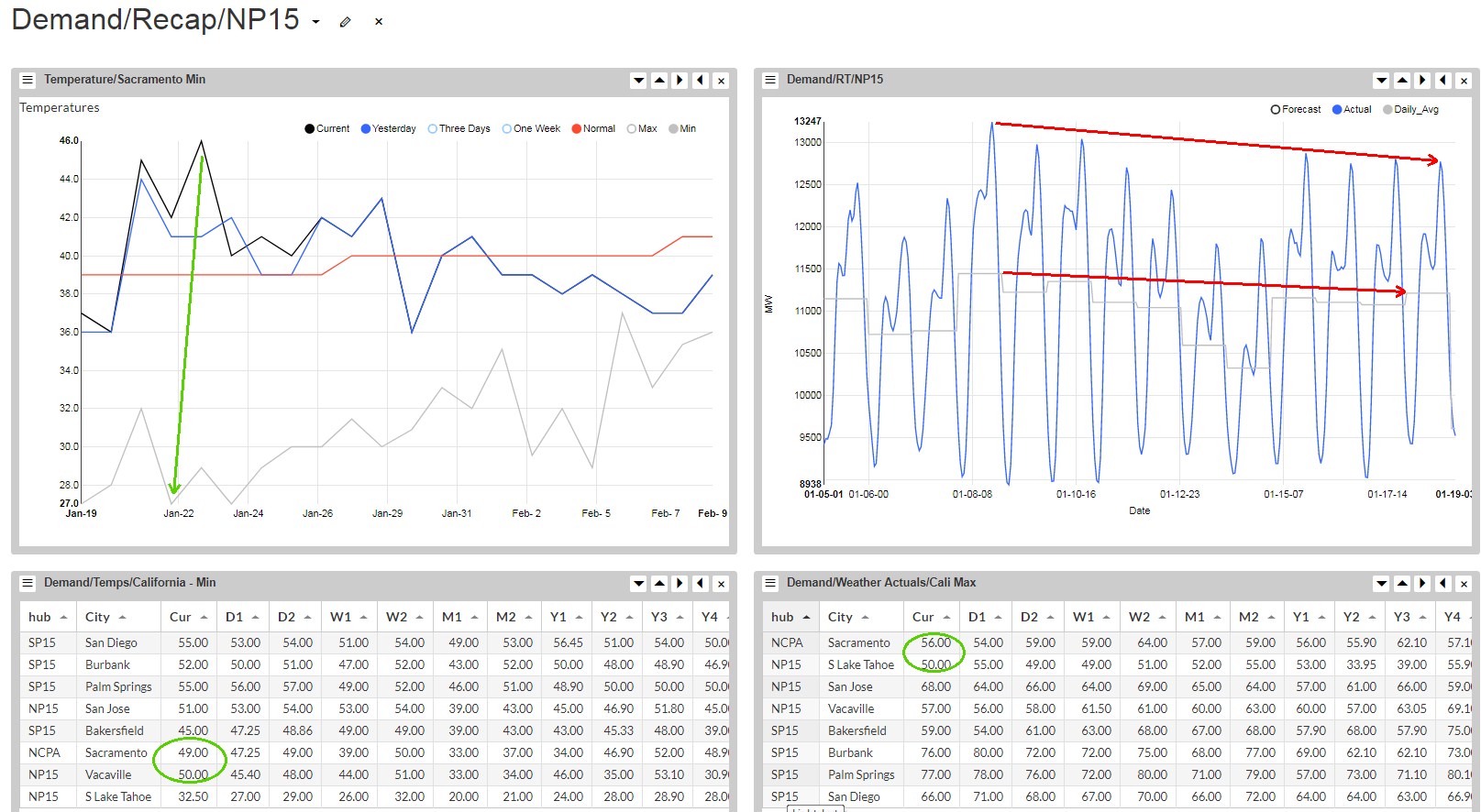 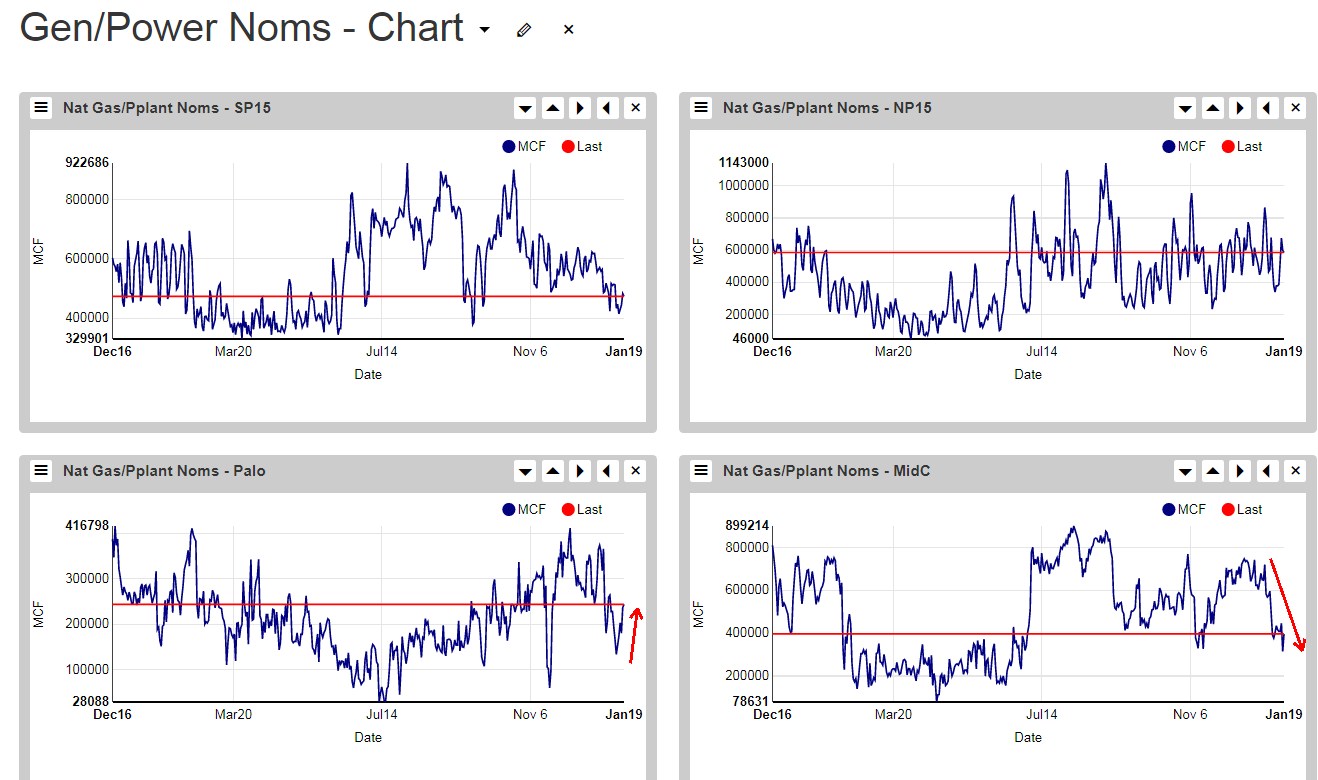 Palo saw a slight uptick in gas nominations for power plants while the Mid-C saw its noms crater and California is just weak both in the North and South. With no bullish weather in store,  don’t expect these to change next week. 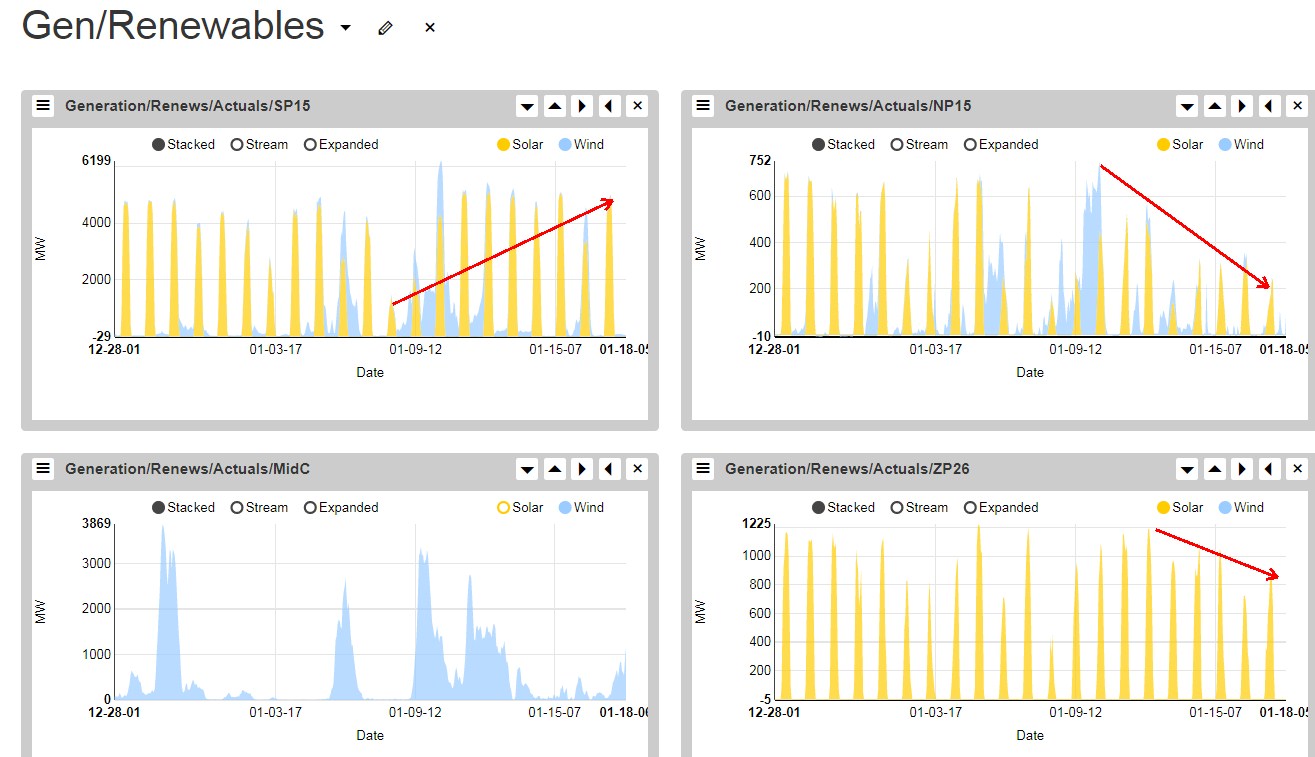 NP’s renewables fell off the proverbial cliff; the zone had neither any wind energy and the sun set on its solar. SP didn’t get any wind, but its solar was strong. The MidC has realized wind on almost every hour over the last couple of days, but not much. 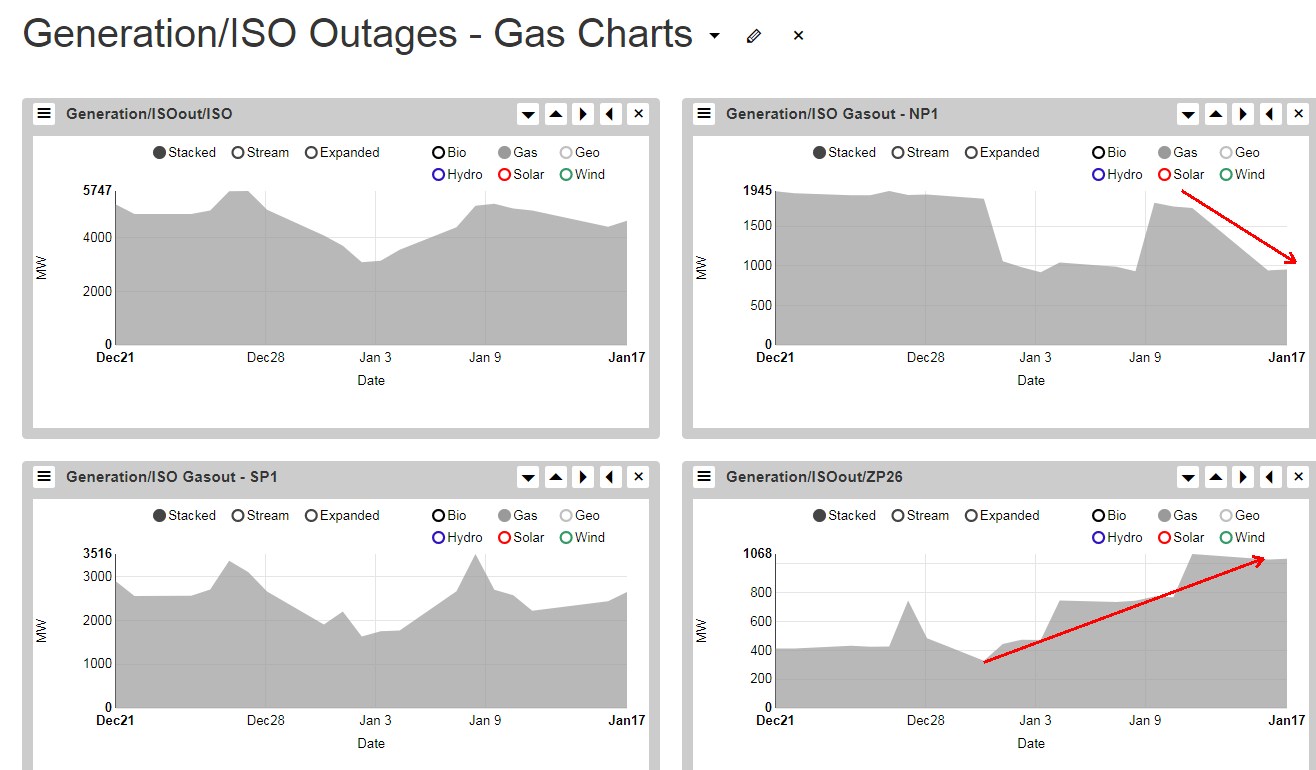 Total gas outages are sideways within the ISO, but NP saw its outages decline while ZP enjoyed a rally and SP yawned its way through the week.

The above is actual hydro energy in the ISO, a day delayed. Though peak hydro has seen a slight rally (first plot) both HL and LL averages are downward sloping. Suggesting, at least to us, that the LL outlook may be tightening inside the ISO.

California will not be dry, but still below average, though these next few days will be as wet as any other WY18 week. Still, the state is well below normal, and storms like this won’t even get it close to normal.

The Northwest is much wetter, especially the west-side; all the I-5 cities are poised to get normal precip, which is around 3″ over ten days. The east side, the side that matters for hydro, is just below average. 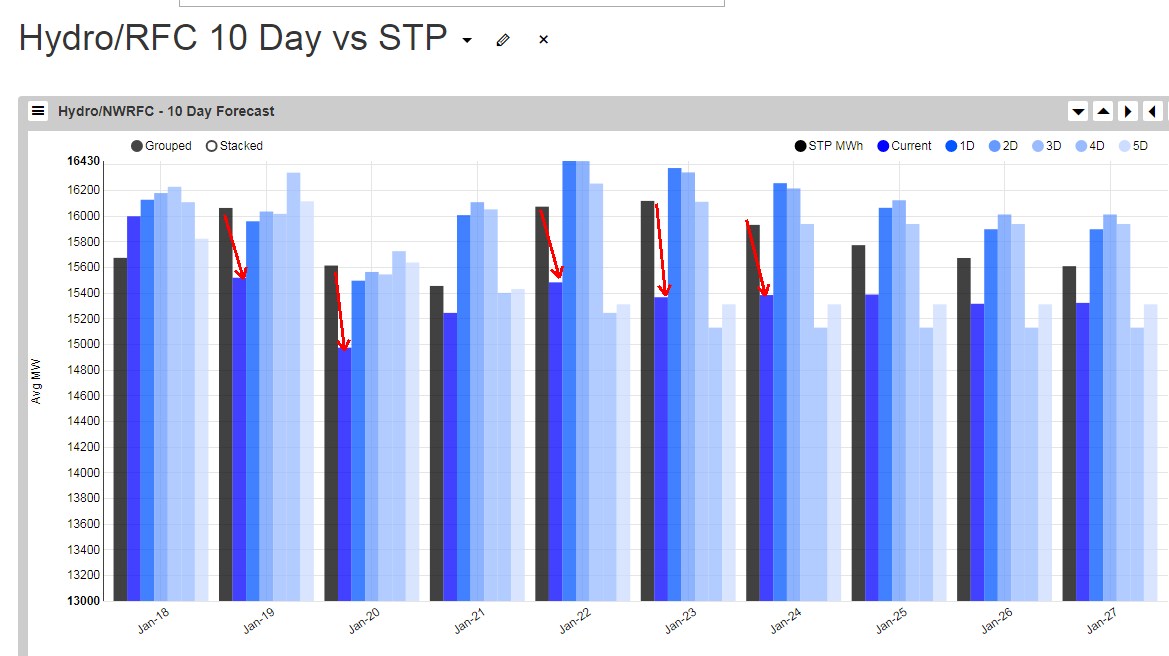 The River Forecast Center has had a change of heart concerning its ten-day outlook; now the feds are cutting their forecasts across the ten-day strip (relative to Tuesday’s STP). Not sure we get it given normal precip but guessing these changes reflect a warmer outlook.

Coulee’s discharge is up, especially in the off-peak hours, but they are doing more than just passing inflows as the reservoir levels are dropping. No panic buttons need be pushed, just regular cycling of the project; probably making room for the impending Feb flood control drafts on BC’s storage projects. 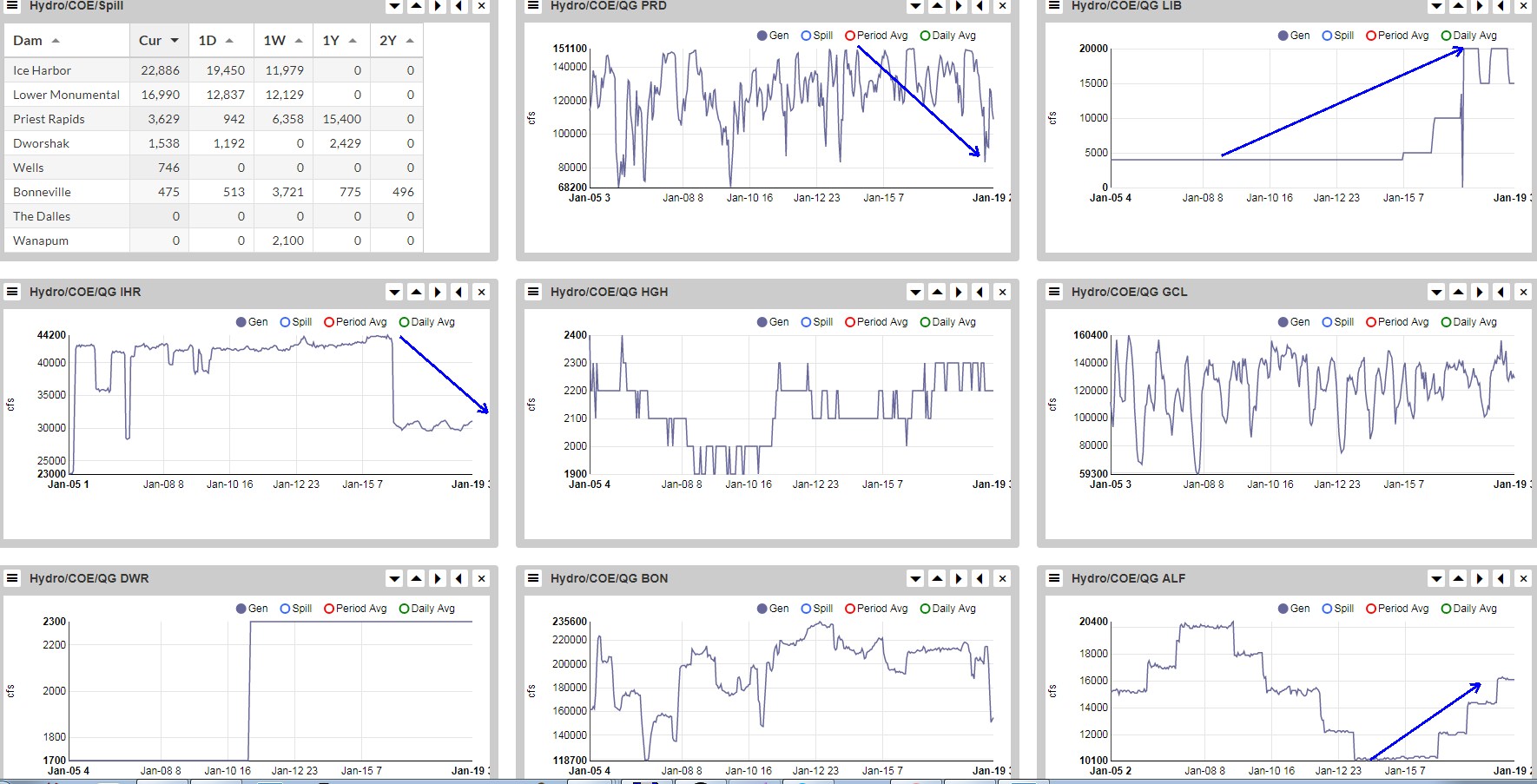 Some regulation changes are taking place on the federal system. Libby flows are soaring; probably the project has started its FC drafts. Priest cut flows over the last 12 hours, so did Ice Harbor. The latter looks to be a 100% regulated change.

BPA tweaked it’s Fall 2018 DC outage, backing off a couple of days at the end of November. Flows on the Northern Intertie have average 500 MWs for the last 14 days – northbound. Flows southbound, to the ISO, are robust; the DC hits TTC more than it doesn’t, and for a few hours the AC exceeded TTC.

FLows out of ZP are next to non-existent; SP doesn’t want the energy, nor does NP. Talk about bearish.

That price spike in the Day Ahead at SP was all Needles based, and now we see the LMP back off. What happened at Mona? Price cleared $5.00 for several hours.

Biggest takeaway today is that we’re glad its Friday and looking forward to the Conference Championships. Our Playoff fantasy team has done awful, we have no choice but switch all our players to Philly and the Jags and pray for upsets.

Oh, and our Power Market conclusions are bearish, but let’s look to the market before we make that call.